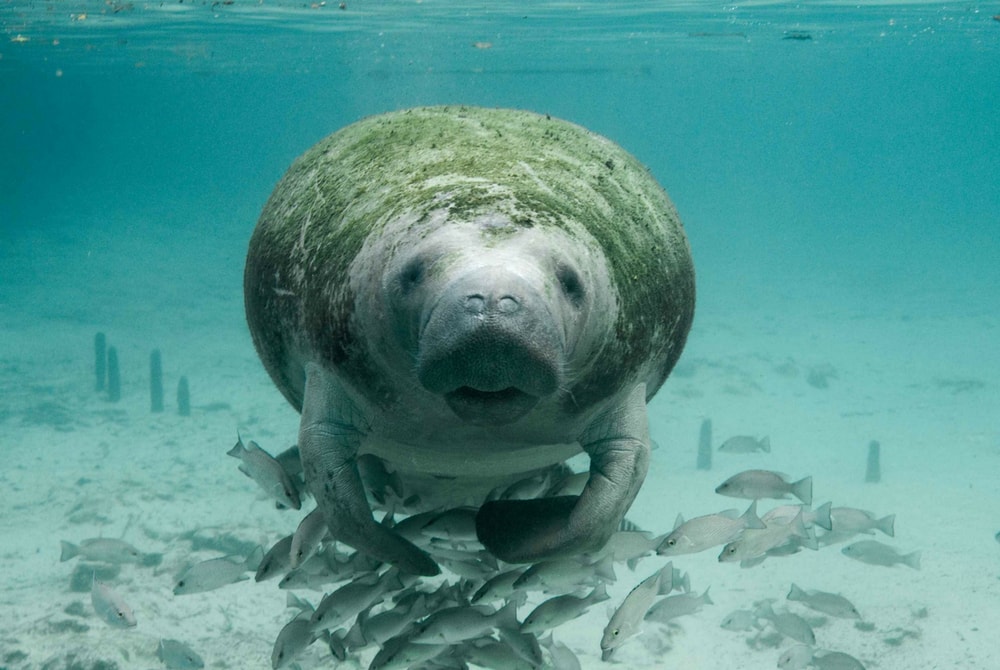 Q: What do you call a cow that lives under the sea?
A: A manatee!

Well ok, manatees are not really cows. But they’re often referred to as “sea cows” thanks to their docile nature and tendency to spend all day grazing on plants.

But how much do you actually know about these herbivorous gentle giants?

Here are 9 fun facts about manatees that will make you appreciate them more than ever. 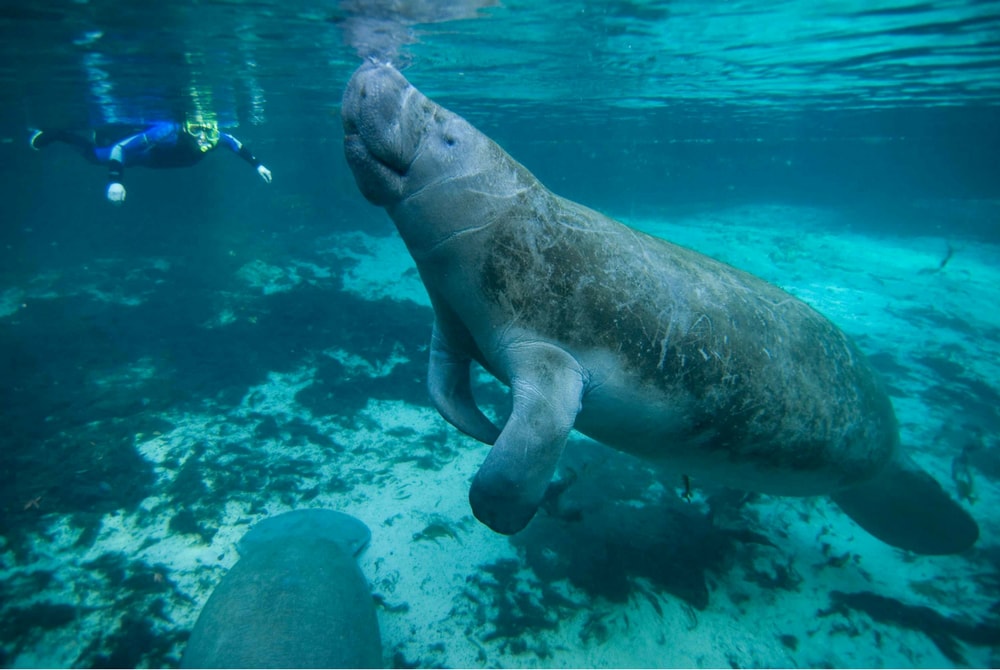 1. The elephant is its closest living relative.

If the rubbery grey skin and lumbering nature of the manatee remind you a little of an earless elephant, it’s not that surprising. The manatee is also closely related to the hyrax.

Contrary to what you might assume, manatees are NOT related to dolphins or whales.

3. Manatees are herbivores, which means they live off a diet of plants. They commonly eat up to 10-15% of their bodyweight daily (which is a lot of vegetation!) 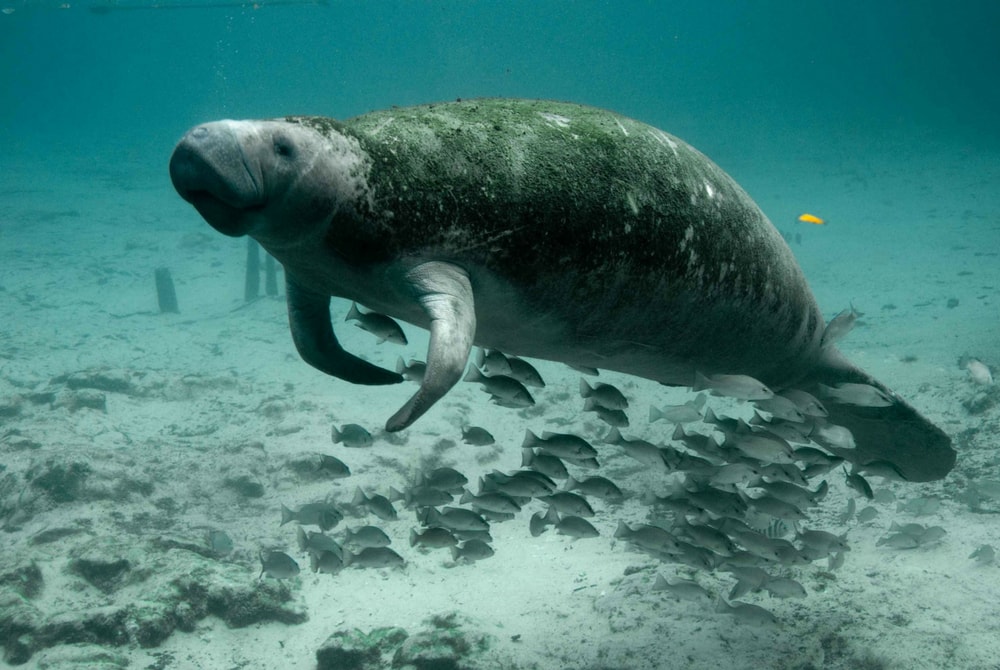 4. The roly-poly manatee may look like it has a thick layer of fat underneath its skin, but its blobby shape is deceptive.

The creature’s large body is actually made up mostly of its stomach and intestines. In fact, their intestines are uncommonly large — typically about 145 feet long!

5. All mammals have exactly seven vertebrae in their necks. Manatees and sloths are the only exception. Manatees have only six cervical vertebrae, which is why they can’t turn their heads but instead have to turn their entire bodies if they want to look in a different direction.

6. Manatee flippers are highly unique. They have jointed bones, so they function a bit like a human hand — manatees use them to bring food to their mouths and even hold objects. They also have three or four nails at the end of each flipper, just like those on the feet of elephants. 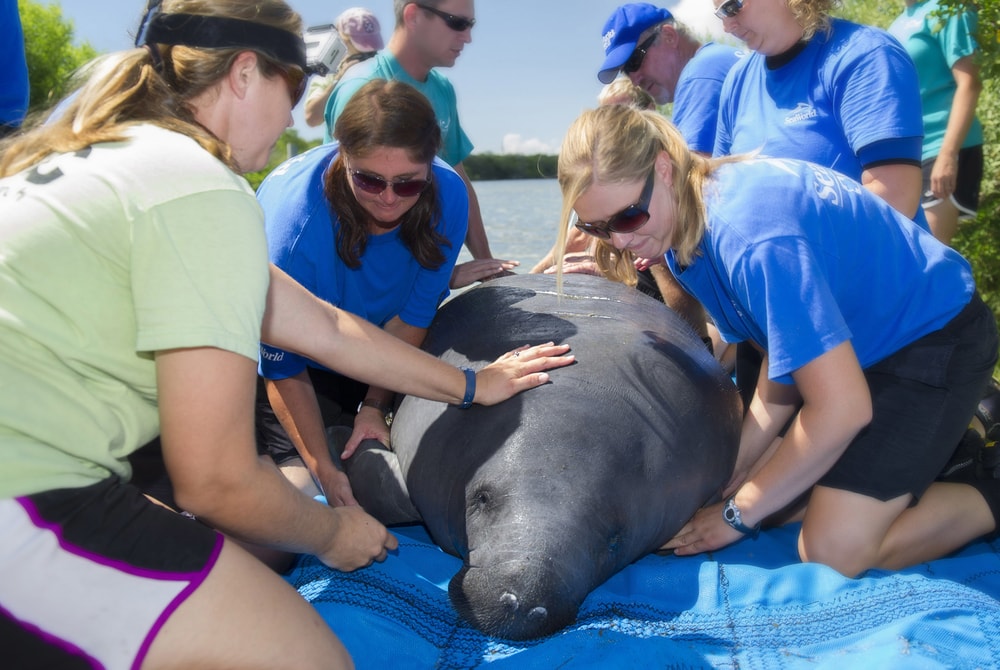 Members of the Florida Fish and Wildlife Conservation Commission, SeaWorld, the Sea-to-Shore Alliance and the 45th Space Wing work together to release an injured female manatee “Laces” – who they rescued and treated – into the Banana River near Cape Canaveral Air Force Station, Florida

7. Manatees face a variety of threats to their existence. These include accidental collisions with watercraft, loss of habitat, and red tide (a type of harmful algal bloom).

Thankfully, the population of Florida manatees has improved, and in 2017 the species was downgraded from endangered to threatened.

Nevertheless, it’s still important that we take care of these graceful creatures and keep protections in place to help them flourish.

8. If you come across a manatee in Florida, look but don’t touch. Manatees are protected by the Florida Manatee Sanctuary Act, and harassing one could land you a fine — or even imprisonment. And yes, giving one an enthusiastic hug unfortunately counts as harassment!

9. The last Wednesday of March is Manatee Appreciation Day in the United States. In Florida specifically, November is Manatee Awareness Month. Not that there’s any bad time to show manatees some love, and support conservation efforts to protect them!

TANIA BRAUKAMPER is an Australian-born writer and photographer rcurrently living in Portugal. She’s obsessed with photographing sunsets and going for long coastal hikes, and always does her best to schedule her travel plans into an endless summer.