Yeah, I was that guy.

The sounds of Bob Marley, Michael Franti and Jimmy Buffett spilled through my stereo speakers. Nameless exotic shores floated across my desktop screensaver, as slowly as the seconds that ticked off the corporate clock.

The dress tie around my neck strangled me like an ever-tightening noose.

On casual Fridays, I sported a colorful tropical shirt – a loud if silent scream for help. I grew my blond hair out until prompting frowns from someone down in the H.R. department. On weekends, my standard uniform consisted of cargo shorts, a faded old t-shirt, flip-flops and not much else. When I wasn’t drinking a martini or some rum concoction, I threw back a cold Red Stripe or two (or three).

The beach permeated every fiber of my being.

There was only one problem: I lived in landlocked Birmingham, Alabama.

Why didn’t we move to the coast earlier? I still ask myself that question. Sure, we had four kids. And we had deep family and professional roots. But as far back as I can remember, my soul had always longed to live at the beach.

Finally one day, something just snapped. A couple of my businesses failed in rapid-fire succession, and I was depressed; demoralized. Not just about my floundering entrepreneurial endeavors, but about my life – slipping away before my very eyes. I remember reading a paraphrased quote by Henry David Thoreau:

“Go confidently in the direction of your dreams! Live the life you’ve imagined. As you simplify your life, the laws of the universe will be simpler.”

What if this wasn’t just poetic pontification? What if Thoreau’s words were intended to be taken literally; a secret prescription for living a truly fulfilling and happy life?

Live the life you’ve imagined. I began to imagine my ideal existence. I imagined a small house at the beach, nothing fancy. On the water, with a dock. I wanted to be outside all day long, basking in warm summer sunshine. On the beach, on a boat, nestled up to a funky beach bar. I wanted to laugh all day with friends, beautiful both inside and out. I also imagined traveling often and traveling far, without the restraints of time.

Fortunately, I have a loving wife and supportive children who were willing to step off the ledge with me… to help imagine and create this new life for our family. 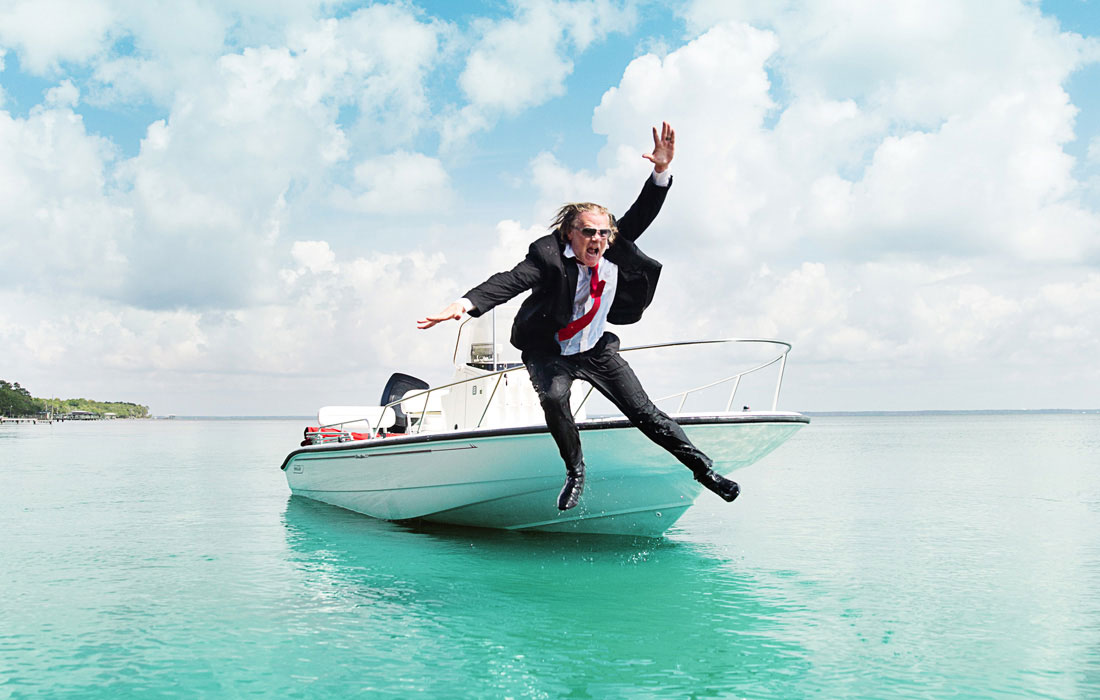 Without knowing a soul, we simply picked up and moved to a small town in Florida’s panhandle called Santa Rosa Beach… which, coincidentally, hugs a two-lane, Gulf-front road called Scenic Highway 30-A.

Today, we enjoy that life I once imagined, and I truly believe it’s because I went confidently in the direction of my dreams rather than letting my career or tradition dictate our family’s path. Now I want to help other people imagine and create their ideal lives, while there’s still time.

So, while our company name was inspired by a short and scenic drive near our home, 30A isn’t just a line on the map. It’s a lifestyle; an attitude. It’s that happy place we all dream of when we need to unwind, unplug and celebrate life.

Today, our 30A family’s mission is simple: To share happy stories from the beach, in the hope that we can inspire others to live the life they’ve imagined.

Mike Ragsdale is the Founder and CEO of 30A®, a beach lifestyle brand established in 2007 in Santa Rosa Beach, Florida.

30A is the official and original BEACH HAPPY® brand! Inspired by a two-lane road that meanders along Florida’s Gulf Coast, 30A shares eco-friendly products and stories that celebrate our small beach town way of life.

We’ve given away 2.5 million of our world-famous blue 30A stickers, and we’ve helped raise $2.5 million for coastal charities. 30A’s line of super-soft apparel is made from recycled plastic bottles, already preventing 4.8 million plastic bottles from going into our landfills and oceans. All 30A designs are printed in the U.S.A. with eco-friendly water-based inks, and our products are shipped in recycled packing materials.

The 30A brand has global reach and national distribution across 400 outdoor outfitters, lifestyle boutiques, surf shops and retail chains stores, as well as through our direct-to-consumer channels, including our 30A retail stores and 30Agear.com.

30A®, BEACH HAPPY® and LIFE SHINES® are registered trademarks of The 30A Company, LLC.

• 30A’s line of apparel is made from recycled plastic bottles

• 380+ retail partners across the U.S. carry 30A Gear, including our recycled apparel line

• 30A Beach Blonde Ale, 30A Rosé Gose Beer and the new 30A IPA by Grayton Beer Company are available in over 5,000 restaurants, bars and markets in six states across the southeast

• 30A Wine by Mercer Estates is available in restaurants and stores across the southeast, including 30A Red Blend, 30A Rosé, 30A Malbec and 30A Chardonnay, which is also available in beach-friendly cans

• Along with 360 Blue and YOLO Board, The 30A Company is a founding partner of The Sonder Project, raising money domestically and abroad to fight hunger and extreme poverty

• $1.5 million raised for local charities through The Sonder Project, including the 30A Half Marathon

• $134,000 raised in partnership with Visit South Walton for limited run Shore Up shirts with 100% of proceeds going to Hurricane Michael relief through The Sonder Project

“The 30A brand – and lifestyle that goes with it – has reached fans far beyond the Gulf Coast.” – Forbes

“30A has [1.3 million] Facebook fans, and its inspiring videos, photos and stories reach millions of beach lovers every week.” —Huffington Post

“If you drive around Birmingham… then you’re likely familiar with 30A, namely in the form of a bright blue and yellow bumper sticker made by a former Birmingham resident who moved to the beach and developed ’30A’ as a major lifestyle brand.” – AL.com

“Meet The Beach Lifestyle Brand Cleaning Up The Earth, One Recycled Bottle T-Shirt At A Time” – Forbes

“30A is an awesome company that makes clothing out of recycled bottles. Typically the bottles would end up in a landfill or in the ocean, but instead they’re mixed with cotton to make super-soft t-shirts.” – Good Morning America

“30A’s recycled clothing line has reached far beyond quaint Santa Rosa Beach (where the shirts are printed), and is sold in [380] outdoor outfitters, lifestyle boutiques, surf shops and retail chains across the United States, in addition to three 30A-brand stores in South Walton, Florida, and online at 30Agear.com – and the list of retail partners continues to grow.” – Forbes

“The bright blue circles appear on cars hundreds of miles from their source. A mystery to many, the stickers trigger fond memories for those familiar with one of America’s most rewarding coastal drives: Highway 30-A in the Florida Panhandle. For them, ’30A’ means good times on the Gulf Coast.” —U.S. Airways Magazine

“People on vacation use the 30A app – they aren’t bringing their laptops & PCs when they travel, but they all have smartphones.” —Entrepreneur Magazine

“You’ve probably seen them — round, blue ’30A’ stickers — adorning cars on highways all over the South. More than (2.5 million) are now strewn throughout the planet and spotted in places as far afield as Afghanistan, Uruguay and Iceland.” —Southern Living

“30A … shirts are made from recycled plastic bottles and are already available in over [380] retail locations nationwide.” –Huffington Post

There was only one problem: I lived in landlocked Birmingham, Alabama.30A was ranked the #1 Independent News Site in America in 2015 by a study conducted by The Tow-Knight Center for Entrepreneurial Journalism in New York City

“30A is more than just a road in Florida. A website that started to promote a small stretch of coastline is fast becoming an international brand.” —ABC WEAR TV

“Pick up the iconic 30A sticker. The bright, sunny sticker represents a relaxing lifestyle and has also raised thousands of dollars for charity.” —Southern Living

“You don’t have to look very hard to notice that 30A has a strong presence in Memphis. Whether you’re on the interstate or a backroad, you’re likely to spot the circular blue logo on bumper stickers across the Mid-South.” —Memphis Magazine

“Since first introducing the t-shirts to 30A fans in fall 2016, the brand has sold enough shirts to keep [5 million] plastic bottles from entering landfills and waterways.” – Forbes

In April 2017, 30A was invited to speak at the 3D Journalism conference, Russia’s largest forum for journalists and media professionals:

Following CEO Mike Ragsdale’s presentation (alongside such brands as CNN and Associated Press), the Russian news media was eager to learn more about the reasons behind the 30A brand’s extraordinary success:

30A®, BEACH HAPPY® and LIFE SHINES® are registered trademarks of The 30A Company, LLC. If you would like to license the 30A logo or brands for a product or service, please contact us.