30A
Home Features Back From The Dead: Dying Defender Finds Life Off The Beaten Path 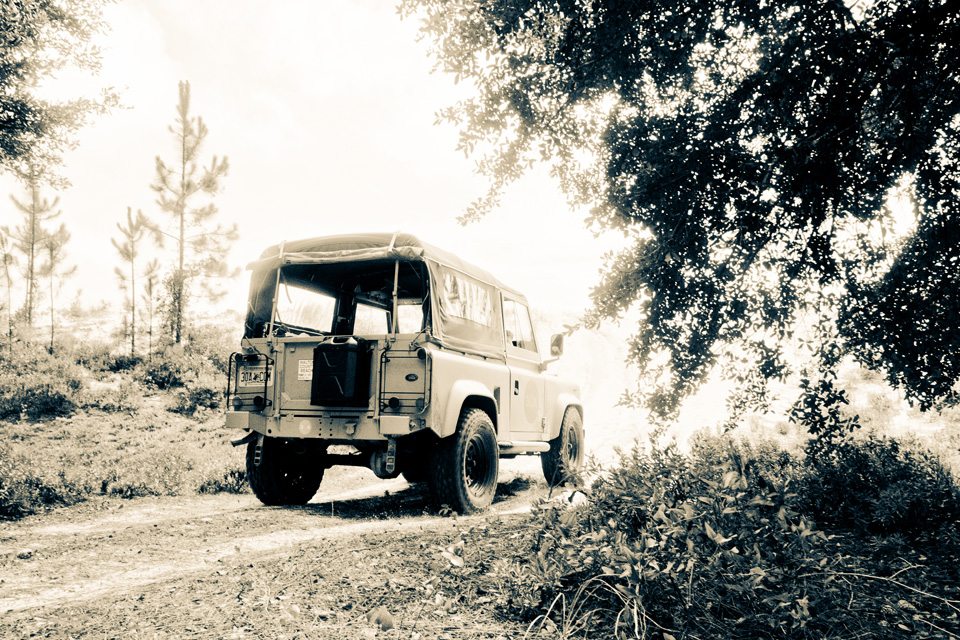 It happened in a cave in Göreme, Turkey, a few hundred miles from the Syrian border. While our kids were busy Skyping with their friends back home (it was a very pleasant wi-fi enabled cave), Angela and I were throwing back shots of Turkish Raki with Brandon and Julie Halstead, two friends from Alabama that we hadn’t seen in nearly 20 years.

Snow dusted the surreal Tatooine-invoking sand spires that surround the tiny town, and despite a strong temptation to toast the magic midnight hour in some local haunt, we instead bunkered into our stone lair for the night, determined to catch up on lost years.

I did not know that Brandon was a carrier.

Years before in Tuscaloosa, Brandon had quickly become my favorite college bartender. In fact, we all became such good friends that I eventually landed a tuxedoed role in their wedding (sad testimony to just how much time I spent in bars).

Now a Lieutenant Colonel in the Air Force, Brandon had once been stationed in Turkey for three years. (I assume he’s in the United States Air Force, but I neglected to ask that question.) When he saw on Facebook that our family was passing through the region on an around-the-world adventure, he knew that Göreme would make an ideal, if unlikely, spot for a long-overdue reunion. 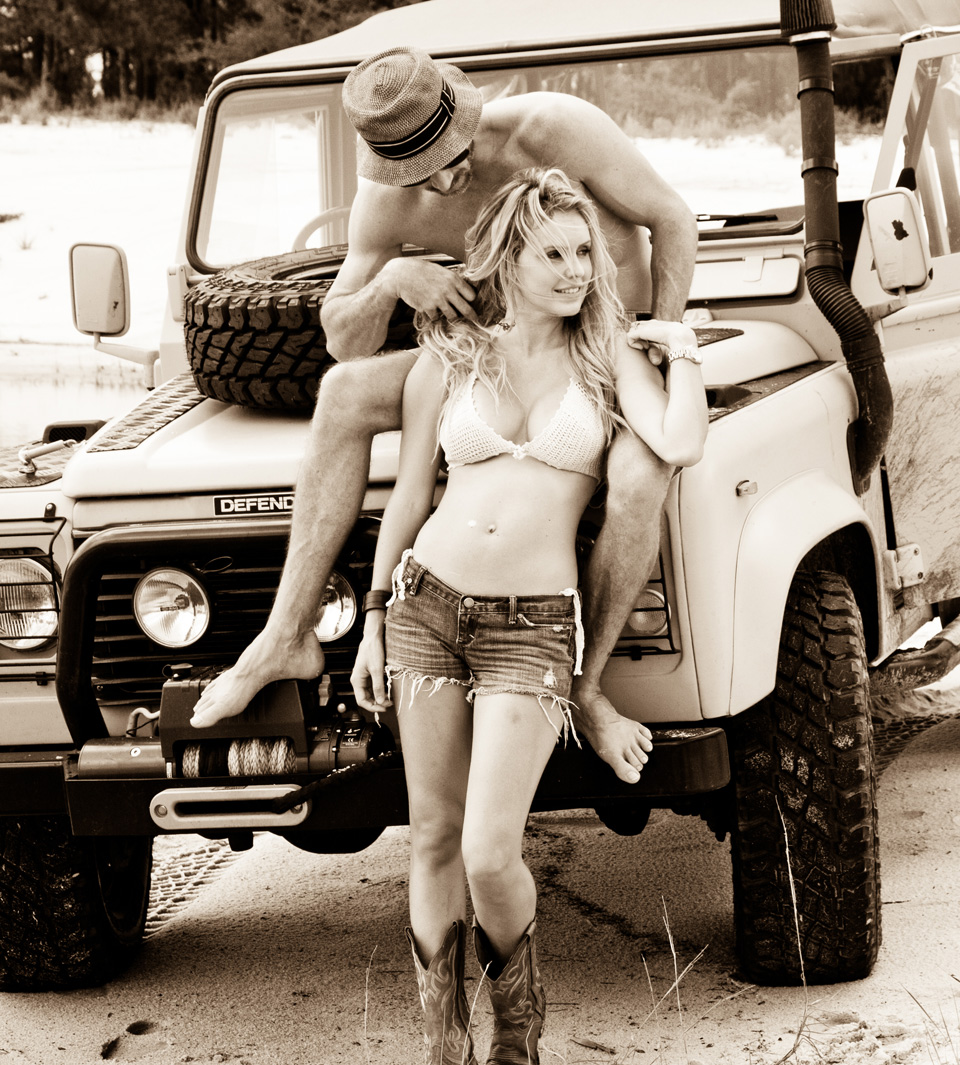 Within the toasty confines of our cave hotel, it wasn’t long before Brandon pulled out his iPad and, beaming like a proud father, began flicking through photos of his baby: A 1985 Land Rover Defender 90 (“D-90”). Like contemporary cavemen telling stories around some technological campfire, we basked in the glow of his iPad screen, wildly gesturing, nodding, grunting and poking at vibrant images of colorful Defenders in distant lands.

I’ve honestly never been much of a car guy. I didn’t even know what a “Defender” was. And yet I was instantly captivated by its confident air of adventure. There was a shovel and pick axe fastened to his hood. A pick… and a shovel… on his hood.

This was Indiana Jones’s ride—or at least a strong Mario Kart contender.

The infection was instantaneous and quite painful. Like some shady drug-dealing middle man, Brandon told me he “knew a guy” who found and fixed up ex-British military Defenders, and that importing one to the U.S. shouldn’t be a problem… that is, if we followed the precise legal steps that Brandon had painstakingly researched and refined over time. Perhaps it was the Raki (an anise-flavored clear liquor that turns milky white when mixed with water), but this all sounded perfectly reasonable to me. After all, Brandon isn’t just a Lieutenant Colonel—he’s a JAG … an Air and Space lawyer, but a lawyer nonetheless. I mean, surely importing a Defender into the United States couldn’t be as legally complicated as protecting orbit right-of-ways for international military satellites, could it? (Could it? I’m asking.) 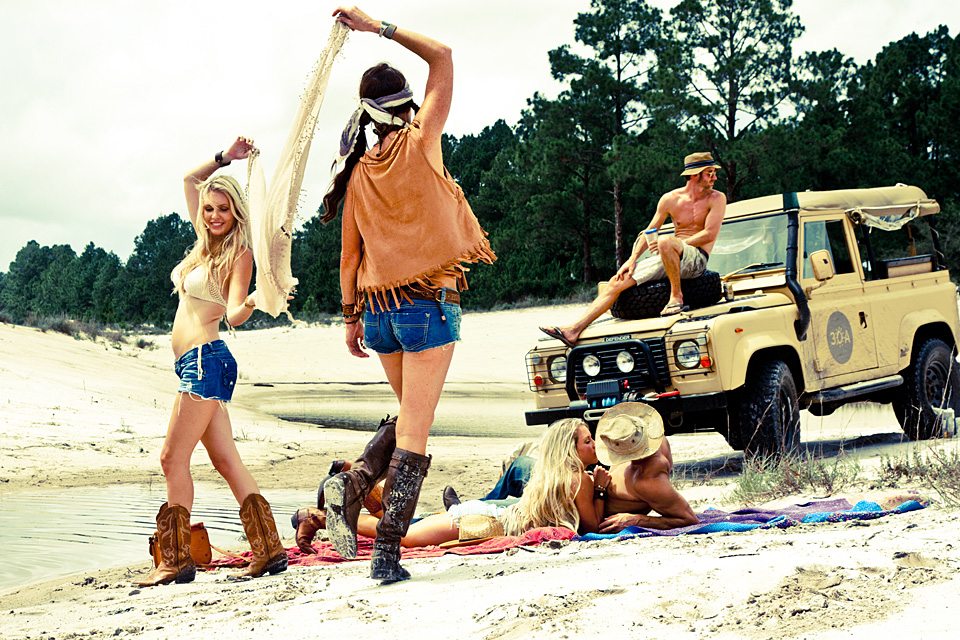 Months later—with our global circumnavigation complete—our family returned home to Scenic Highway 30-A, a hidden strand of quaint beach towns along Florida’s Gulf Coast. I’d sold my car before we left on our big trip, so now I found myself in dire need of transportation. 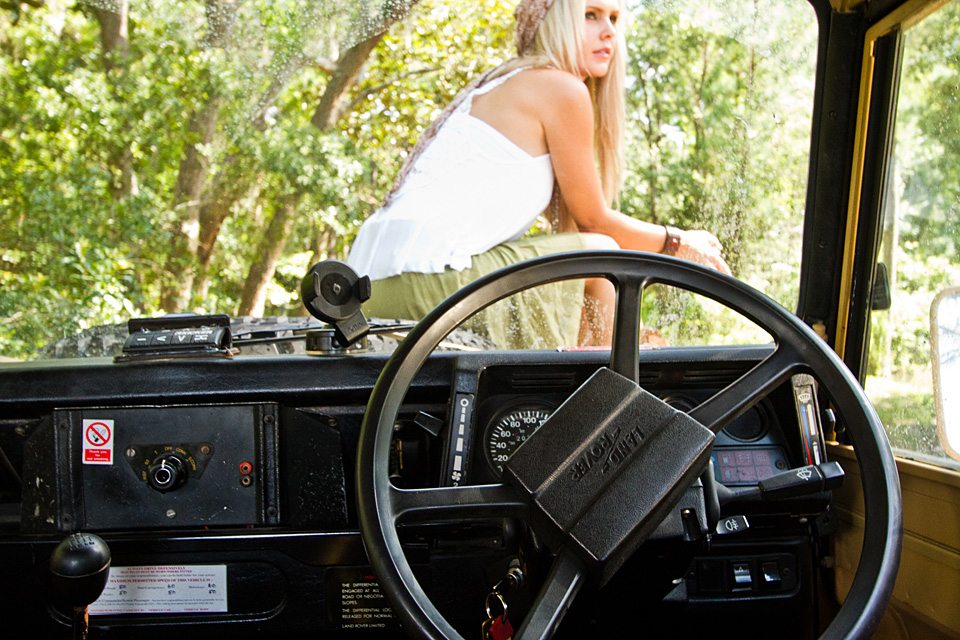 My fevered brain craved something uncomfortable, with no air conditioning or reclining seats. Or air bags. It needed to be radically unsafe.

It demanded a 5-speed manual transmission, preferably on the wrong side. Something that permanently reeked of sweat, oil and diesel fumes. Something that consumed hard-to-find parts like breakfast cereal. Something that would require months of restoration work, reams of bureaucratic paperwork and some sort of legally binding partnership with a decent mechanic. You know, something practical.

So I called my bartender.

In August 2012, Brandon emailed me the good news. He’d found an old D-90 in great shape, sitting dormant on some European military lot. He emailed me a few glimpses. While it appeared to be surrounded by countless other military vehicles, it looked very much alone. Abandoned. Forgotten.

The scant records showed that it was originally put into Ministry of Defense (M.O.D.) service on August 29th, 1986 (Registration ID: 61KF77). The last unit it served was the Royal Wessex Yeomanry, an armored regiment of the British Territorial Army. It probably never left the British mainland, which helped explain why it was in such good condition for its age. There was a 200 Tdi (Turbocharged Direct Injection) diesel engine under the hood; something that Brandon had painstakingly searched for.

He was perfect. I was head-over-flip-flops in love. I committed quickly and completely, and like some messed-up Match.com mash-up between man and machine, we began our long-distance bromance, exchanging photos and pleasantries. 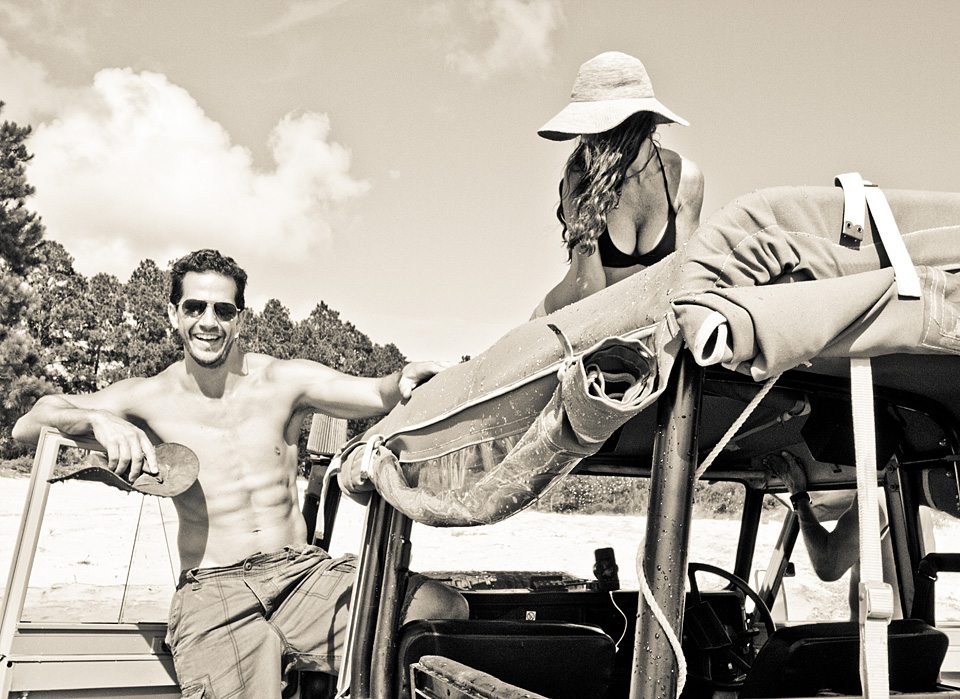 But I knew that I couldn’t suffer my newfound condition alone. Deep down, like any self-respecting zombie, I knew that I had an immoral obligation to infect others.

Fortunately, here in Florida’s panhandle, I run 30A, a brand that celebrates the laid-back coastal lifestyle that locals enjoy here. Even though our town only has 12,000 full-time residents, our 30A Facebook page alone has over 500,000 fans.

So I began sharing photos of my overseas love interest with thousands of friends and fans. I posted polls asking for advice on which on features to add and which customizations to make. Tens of thousands of people chimed in, all eager to help steer us in the right direction.

As a direct result of that fan feedback, I added things like a 12,000-lb plasma rope winch, to help rescue any overzealous out-of-towners who get stuck in our sugary sand. I added a rear-mounted British M.O.D. jerry can to amply douse beach bonfires. And we added a snorkel… well, mostly because it looks cool. We’re at the beach, so we decided to go topless, stripping off his tattered NATO-green canvas and adding a heavy duty cage across the rear. 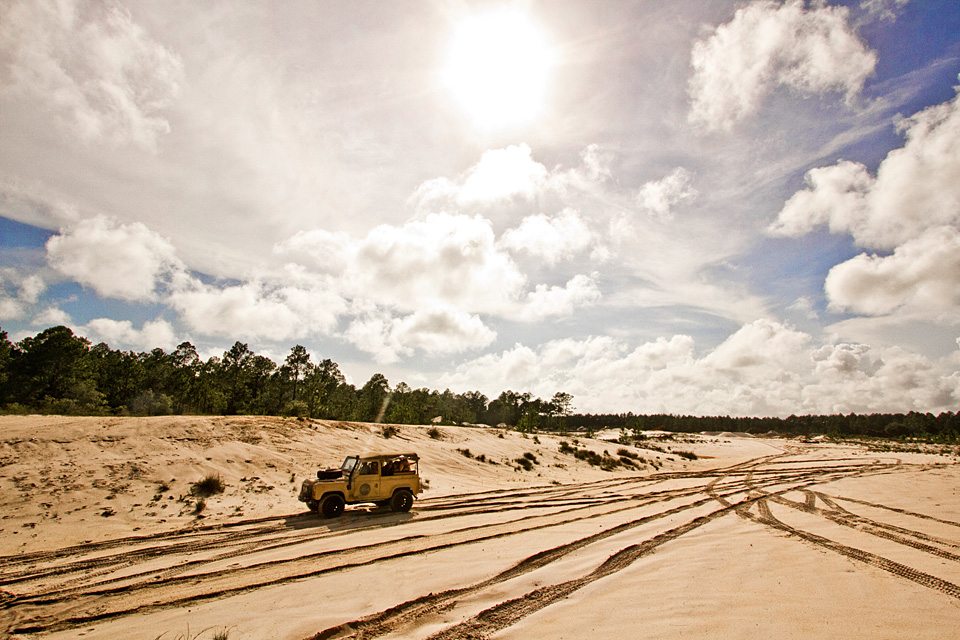 Then I asked fans what color I should paint him… but I simply couldn’t bring myself to go with their overwhelming first choice: “30A Blue.” Painting him Gulf of Mexico turquoise just didn’t seem true to his military heritage. Plus, out of the thousands of Facebook comments on this polarizing topic, one post in particular ricocheted around in my head like an errant artillery shell:

“Trust me,” he wrote. “If you paint it a girly color, it will never run right again.” 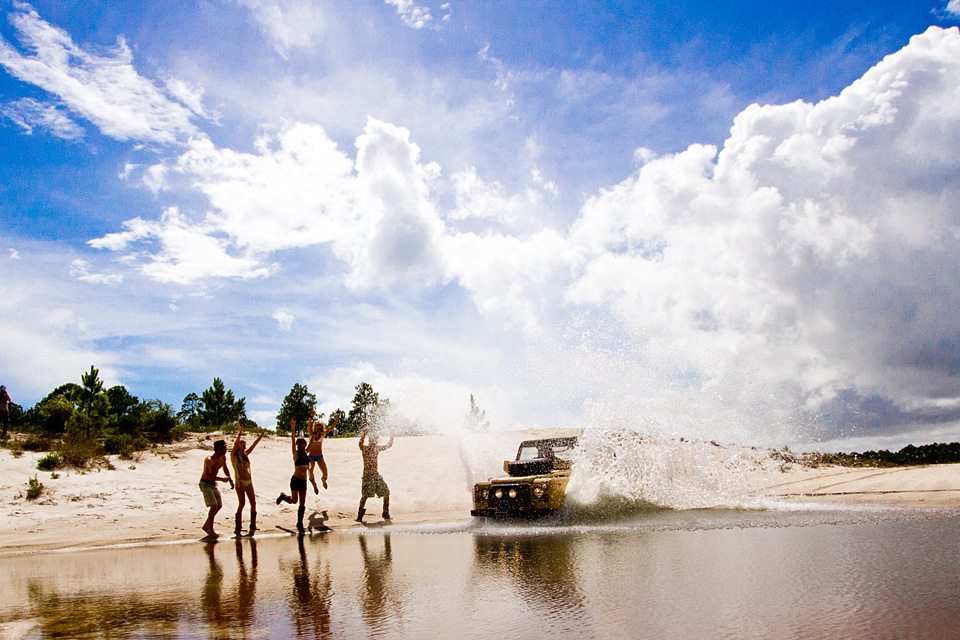 So, I made an executive decision and opted for their second most popular color choice: Sand (technically, “Light Stone” on the British M.O.D.’s official color palette).

I even asked fans what we should name him. They came up with dozens of clever suggestions (Sandy, Sonny, Winston, etc.), but ultimately they voted for Truman, after our community’s most famous—if fictional—resident.

During those long desperate months of trans-Atlantic restoration work, I did my best to ignore the Facebook chatter that said I was “crazy” and that importing Defenders into the U.S. was “impossible” due to our strict safety and EPA laws. I pretended not to notice YouTube videos of Defenders being seized and crushed upon entry.

And yet, despite a few nail-gnawing bureaucratic setbacks, Truman eventually cleared U.S. Customs in Jacksonville and was ushered onto a flatbed truck. Then on March 29th, 2013—after 8 long months of waiting—Truman finally rolled into my driveway in Santa Rosa Beach, where he’ll enjoy the rest of his days basking in our Florida sunshine. 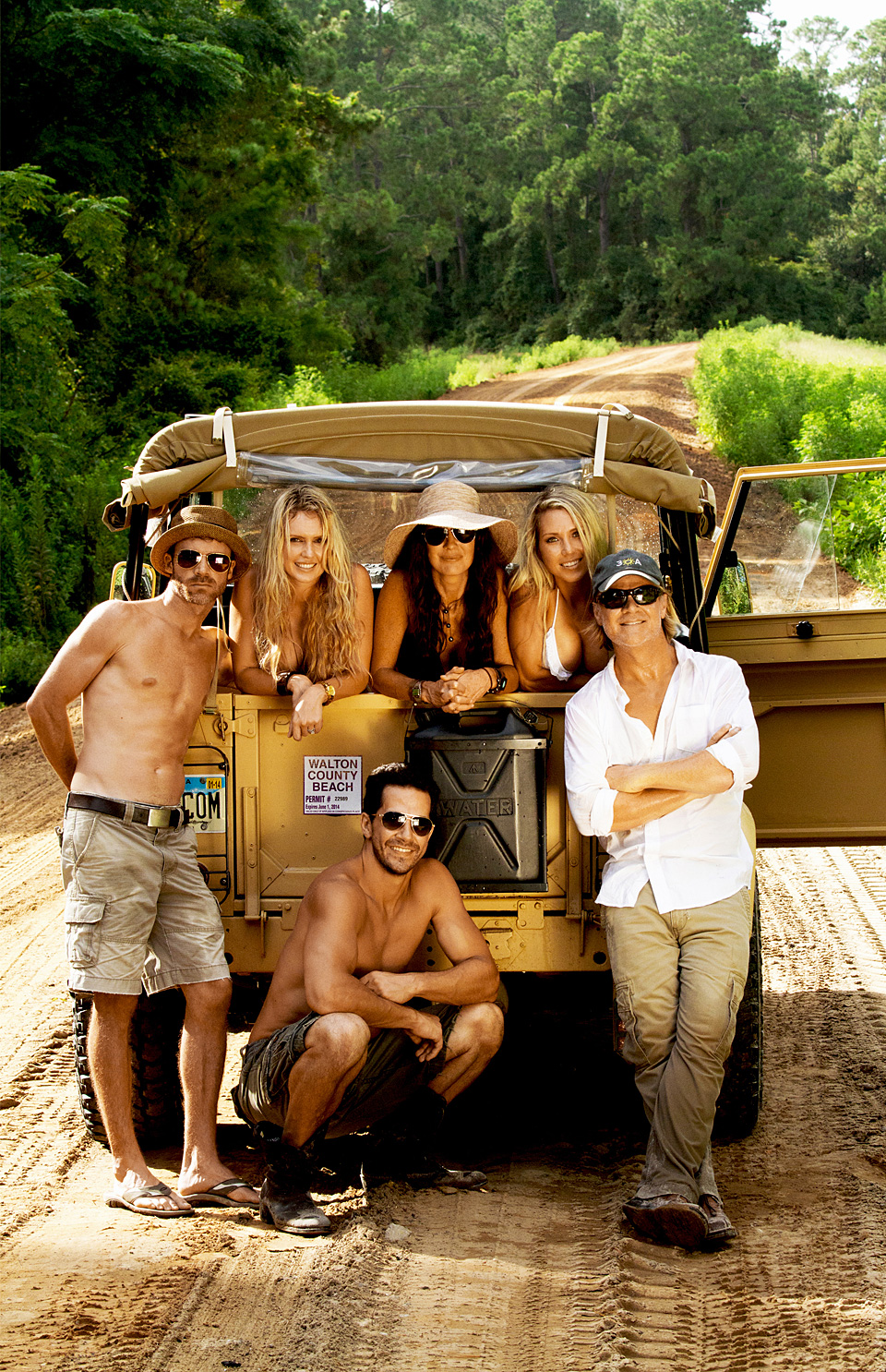 Retirement has been kind to Truman.

He spends a lot of time on the beach, and enjoys off-roading through our 25,000 acres of pristine state forest. He’s already become something of a local celebrity in our little beach town. He loves posing for photos and riding in local parades. He enjoys frequent spa treatments at the garage. Like the bartenders of my youth, my mechanic is now my best friend. We spend a lot of quality time together. (I wonder if he has any wedding plans?)

The very first Land Rover—named HUE 166—rolled off the assembly line in 1948. Orville Wright and Gandhi both died that year, and Harry S. Truman was President. Jackie Robinson had recently become the first African American to play Major League Baseball, and Chuck Yeager had just broken the sound barrier. “Miracle on 34th Street” was the big hit in movie theaters.

Sadly, Land Rover officially announced The Defender Apocalypse: After nearly 70 years, the last Defender is slated to roll off the production line in December of 2015. Its emissions deemed unclean. Its aluminum shell considered unsafe. Never mind that they’re safer than motorcycles or scooters, and that recycling old cars is far better for the environment than crushing them in a landfill and then constructing something entirely new from scratch. These icons of adventure and global exploration have fallen victim to emissions regulations, airbag requirements and political correctness. There’s just not much room for Indiana Jones, Rick Blaine, Ernest Hemingway or T. E. Lawrence in a world absorbed with hand sanitizer, carbon offset points and water vapor cigarettes. We’ve become averse to adventure and allergic to ourselves.

Is this the Death of the Defender? Perhaps.

But even if new Defenders will no longer be born into this increasingly risk-adverse world, HUE 166’s intrepid spirit is simply too contagious to suppress. It’s a disease that cannot be cured. And those of us who have been infected will still be here… bringing old Defenders back from the dead, one at a time.

Enjoy a summer getaway at Alys Beach, the premier luxury resort town on Florida's Gulf Coast. Alys Beach is a unique New Urbanist community that combines stunning architecture with the gracious character of courtyard living. Guests can tailor their vacation to include the ﬁnest culinary talents in the region, distinctive shopping choices, outdoor activities on an exclusive beach, winding nature trails, and a state of the art wellness center. The utmost in beauty and luxury awaits.
1,303,628FansLike
157,501FollowersFollow
23,879FollowersFollow
3,980SubscribersSubscribe