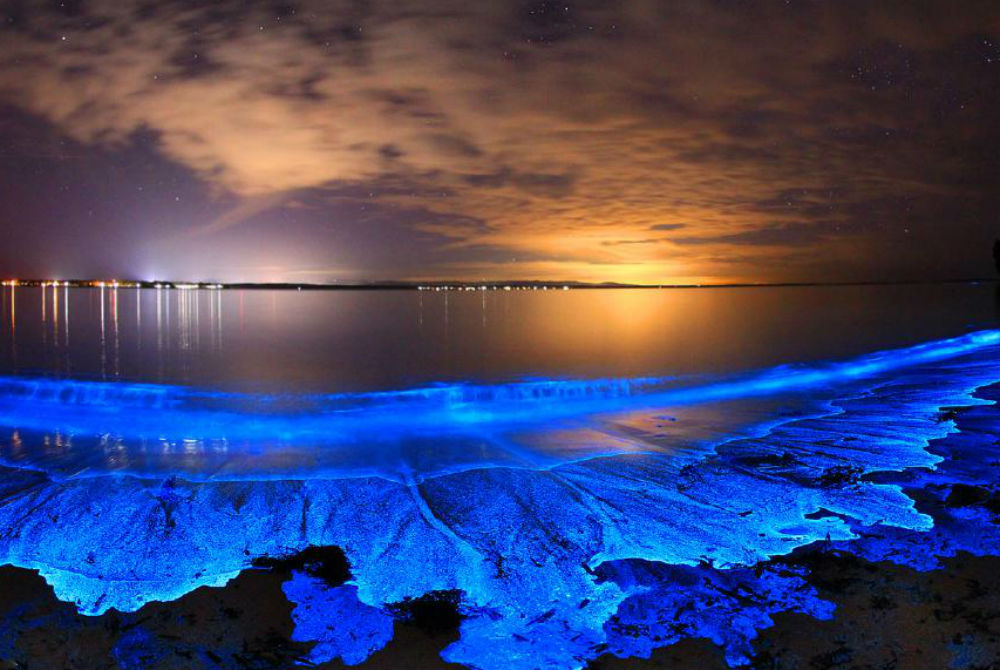 Bioluminescent plankton on a South Coast beach. Picture Credit: Joanne Paquette, author of '‘Rarely Seen: Photographs of the Extraordinary’ via the National Geographic

Set against the night sky, the surf lights up an iridescent blue as it rolls to the shore. The water glitters this same electric blue with the splashing of a fish or trailing of a kayak paddle, and footprints sparkle azure as beachcombers walk in the wet sand.

The glowing is caused by simple chemistry: Some species have natural chemical reactions in their bodies that causes light to be emitted. Ever see a firefly on a summer evening? It’s the same process.

There are several aquatic species that display bioluminescence, including varieties of fish, jellyfish and crustaceans. But the most common are tiny single-cell organisms called dinoflagellates. They’re the ones that give off the distinctive bluish-green glow when something disturbs the water. 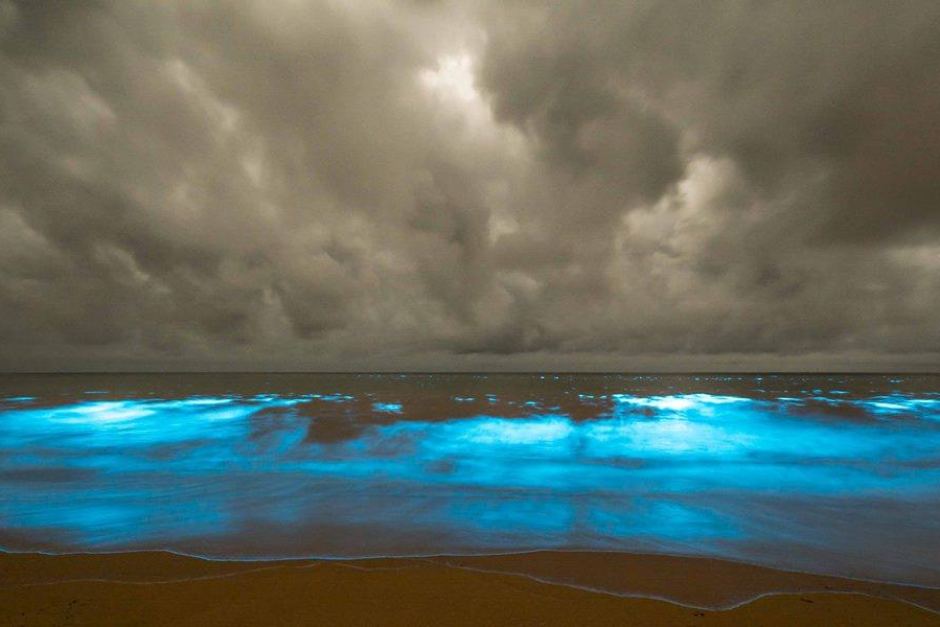 The bright blue glow caused by plankton at a beach in Tasmania. (Photo credit: Brett Chatwin via Facebook)

Look closely and you’ll see the glowing blue water is actually made up of millions of tiny blue dots – that’s the dinoflagellates undergoing their light-emitting reactions.

References to these gleaming algae can be found in folklore from around the world.

Today, you’ll find social media posts and news reports about the light-up seas from locations as diverse as Japan, Thailand, the Maldives, Belgium, the United Kingdom, Jamaica – and in the United States, Manasquan Beach, New Jersey, San Diego and the central coast of California. 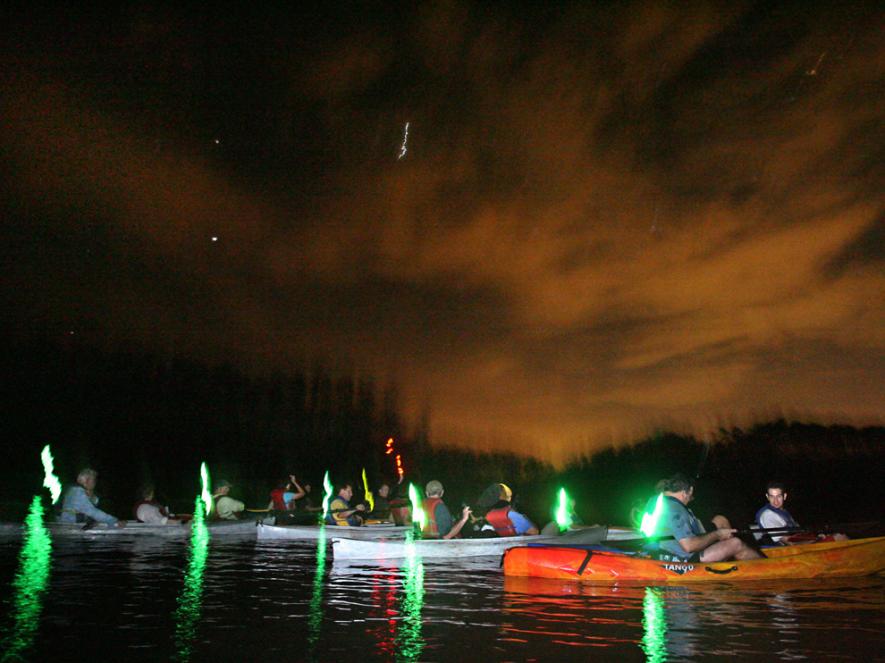 In Florida, you can check out the Indian River and Merritt Island National Wildlife Refuge to see bioluminescent plankton and comb jellies for yourself.

The best viewing is when the water is warm and calm – from mid-May through October. Try to pick a night when the moon isn’t out. The darker the sky is, the more the bioluminescence will pop.

As fun as it is to see, the light display is more than just for show. Researchers think the reaction could be a way to attract a mate and serve as a means of self-protection – the sudden flash of light scares off predators that are momentarily illuminated so they could become preyed upon themselves. 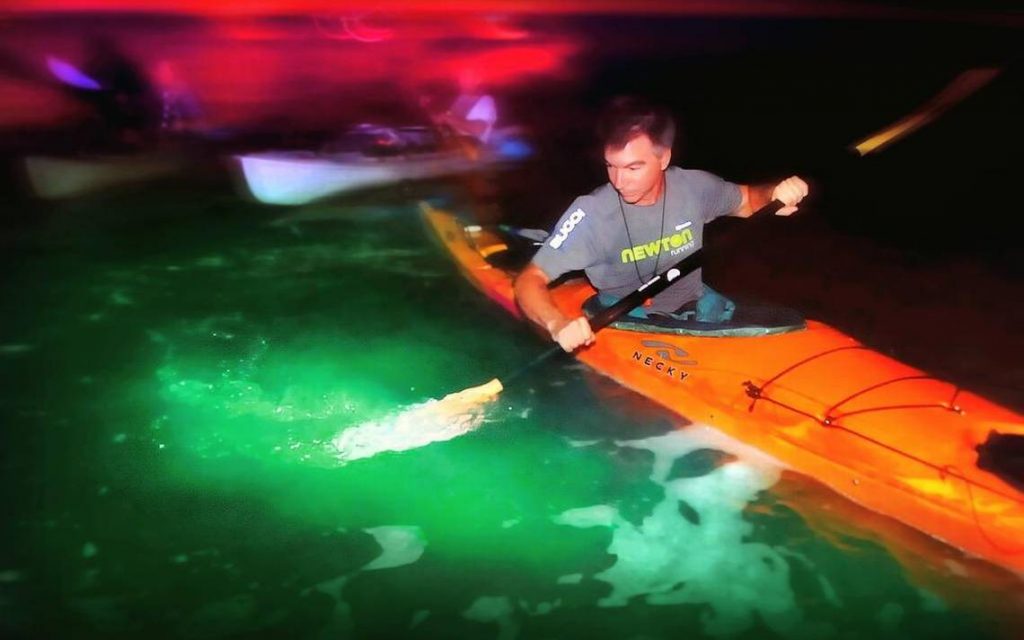 Scientists are also studying how bioluminescence might prove useful for humans.

For example, one application could be using the same chemical reaction to replace outdoor and interior electrical lighting. One company is already using luminescent bacteria to test water quality. Bioluminescence is also being used to track human cells, which could lead to better treatments for cancer or other serious diseases.

Pretty, practical and potentially healing – maybe it is magical water after all.