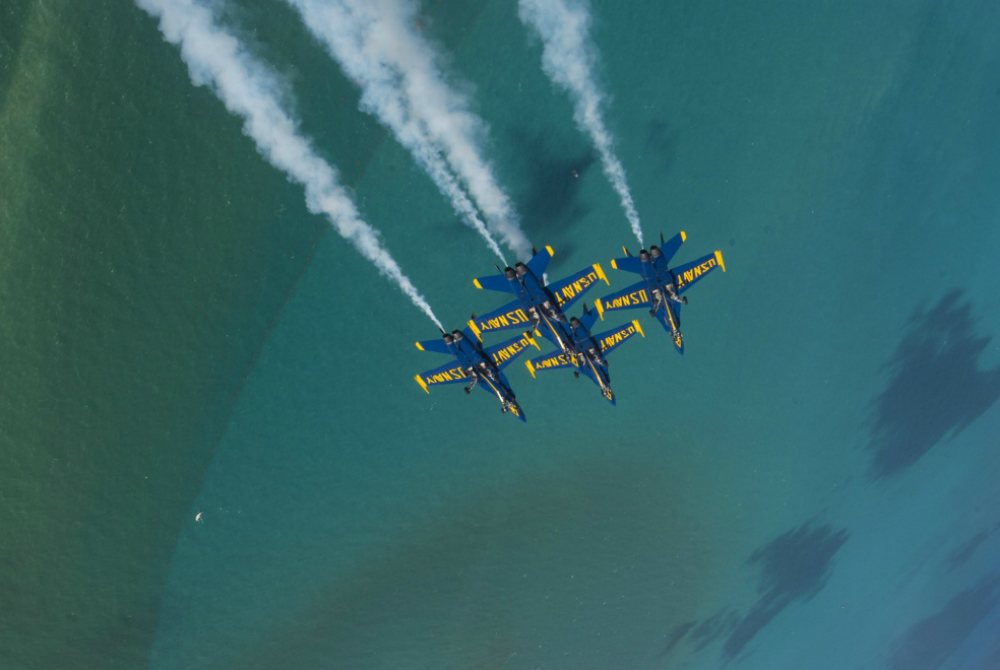 The Emerald Coast is known for our beautiful emerald waters along the coast, and the amazing Blue Angels in the sky. It’s not uncommon to see a flyover from one of our many military bases while enjoying a day on the beach.

In 1946, the Navy had a vision to create a flight exhibition team in order to raise the public’s interest in naval aviation and boost Navy morale.

Since the first show at Craig Field in Jacksonville on June 15th that year, audiences have been thrilled with the Blue Angel’s precision combat maneuvers.

The first demonstration in 1946 featured three F6 Hellcats, and in 1956, the team moved to the six jet delta similar to what you see today. During their aerobatic demonstration, the Blues fly six F/A-18 Hornet aircraft. Pilots keep audiences on edge as they get as close to each other as 18 inches during the Diamond 360 maneuver, climb as high as 15,000 ft, and drop as low as 50 feet. The Blue Angels race up to 700 mph (just under Mach 1) and cruise at their slowest speed at about 120 mph. Just as impressive, each Blue Angel aircraft is capable of being returned to combat duty aboard an aircraft carrier within 72 hours, and the average lifespan of each of the jets is roughly 30 years in service after already serving several operational years in the Fleet.

“Each performance provides the American public an opportunity to view the incredible capabilities of the hundreds of thousands of Sailors and Marines assigned to every ship, squadron, and unit in the U.S. Navy and Marine Corps protecting and defending America right now,” says LTjg Chelsea Dietlin, Public Affairs Officer for the Blue Angels. “Blue Angel participation in air shows and flyovers is an essential way to connect Americans with their United States Navy and Marine Corps in communities across the country.”

“Our goal for 2020 is to continue to inspire young men and women not just to pursue a career in naval aviation or the military, but to excel in all areas of their lives,” said LTjg Dietlin.

The Blue Angels have flown for an estimated 500 million fans worldwide since their first show, and it’s estimated that 11 million spectators attend air shows each year.

Additionally, the Blue Angels visit more than 50,000 people a season during school and hospital visits.

Locals and visitors flock to Pensacola twice a year to catch the Angels in action. Each July, the Pensacola Beach Air Show highlights the hometown heroes and the Blue Angels Homecoming Air Show wraps up each the season in October or November.

Anyone looking to see the Blue Angels between shows are encouraged to attend a practice session just down the coast at the National Museum of Naval Aviation at NAS Pensacola. Practices are usually held most Tuesday and Wednesday mornings during the show season (March through November) when the team is home.

Tentative practice and show schedules may be viewed on the Blue Angels’ website.

The team visits the museum to answer questions and sign autographs after most Wednesday practices.

Including the 2019 season, there have been 267 demonstration pilots and 37 Flight Leaders/Commanding Officers. Some current and former Blue Angels pilots have gone through TOPGUN (Do you hear “Highway to the danger zone…” playing? Just us?); however, it is not required. Each member of the squadron volunteers for duty with the Blue Angels and must be an active-duty Navy or Marine Corps tactical jet pilot with a minimum of 1,250 flight hours.

“Our +140 Sailors and Marines on the team today uphold the rich tradition of excellence instituted by those who have served before us and that is what makes the team so special,” said LTjg Dietlin.

This special flight team is just one more reason to love our little coastal community. You have to see them for yourself to truly understand.

JESSICA ROBERTS is a Santa Rosa Beach writer and event producer. When not working or writing, you’ll find her out on the water or traveling somewhere new.

Enjoy a summer getaway at Alys Beach, the premier luxury resort town on Florida's Gulf Coast. Alys Beach is a unique New Urbanist community that combines stunning architecture with the gracious character of courtyard living. Guests can tailor their vacation to include the ﬁnest culinary talents in the region, distinctive shopping choices, outdoor activities on an exclusive beach, winding nature trails, and a state of the art wellness center. The utmost in beauty and luxury awaits.
1,298,779FansLike
150,898FollowersFollow
23,585FollowersFollow
3,980SubscribersSubscribe