Deer Lake State Park: A Little Slice of Paradise That Has It All - 30A 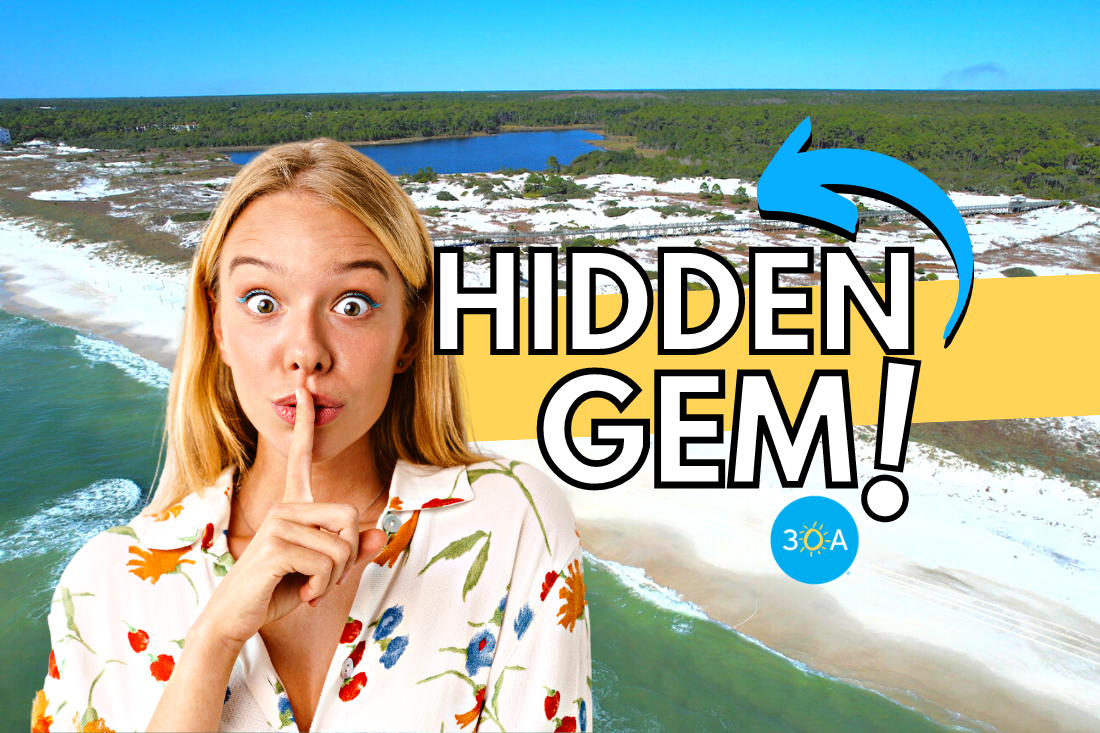 If you blink, you’ll miss it. And well… that would be a shame.

Until very recently, this was just a dirt, pot-hole of a road; one that wound around to an unassuming gravel parking lot. The shaded boardwalk entrance hardly hinted at the epic vistas hidden just beyond the first few turns of the trail.

Perhaps that’s why this special place went so unnoticed, by so many, for so long.

Hardcore locals will no doubt yearn for the days when this secret was “best-kept,” before the proverbial pavement poured over paradise. But, as an optimist whose glass is generally half-full, I’d like to think that making our parks more inviting will introduce them to fresh young minds who will become more determined than ever to protect our precious natural habitats.

We love what we know – and we protect what we love. Inviting people to discover and use our parks is critical to ensuring their long-term preservation.

That said, Deer Lake is a relatively new state park. The initial acreage was acquired from The St. Joe Paper Company in 1996. A year later, the State of Florida took some land that was part of Grayton Beach State Park and added it to what is now designated as Deer Lake State Park. All told, the park now comprises over 2,000 acres. 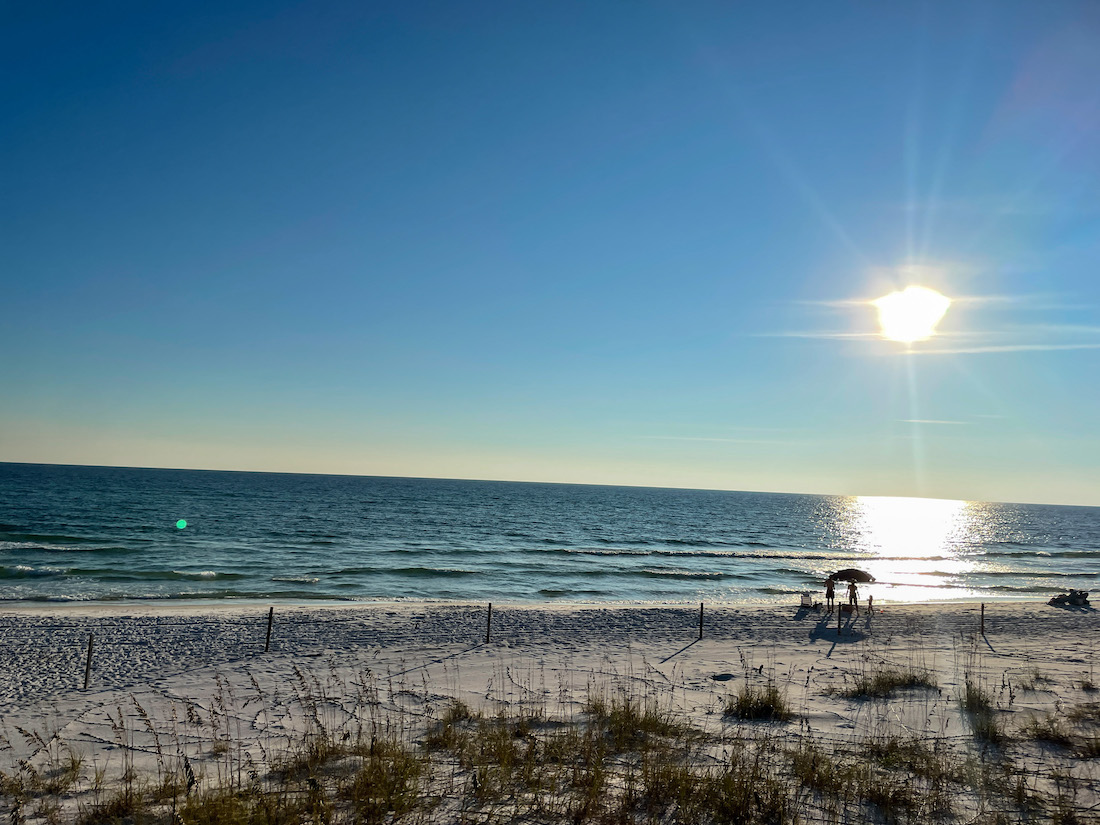 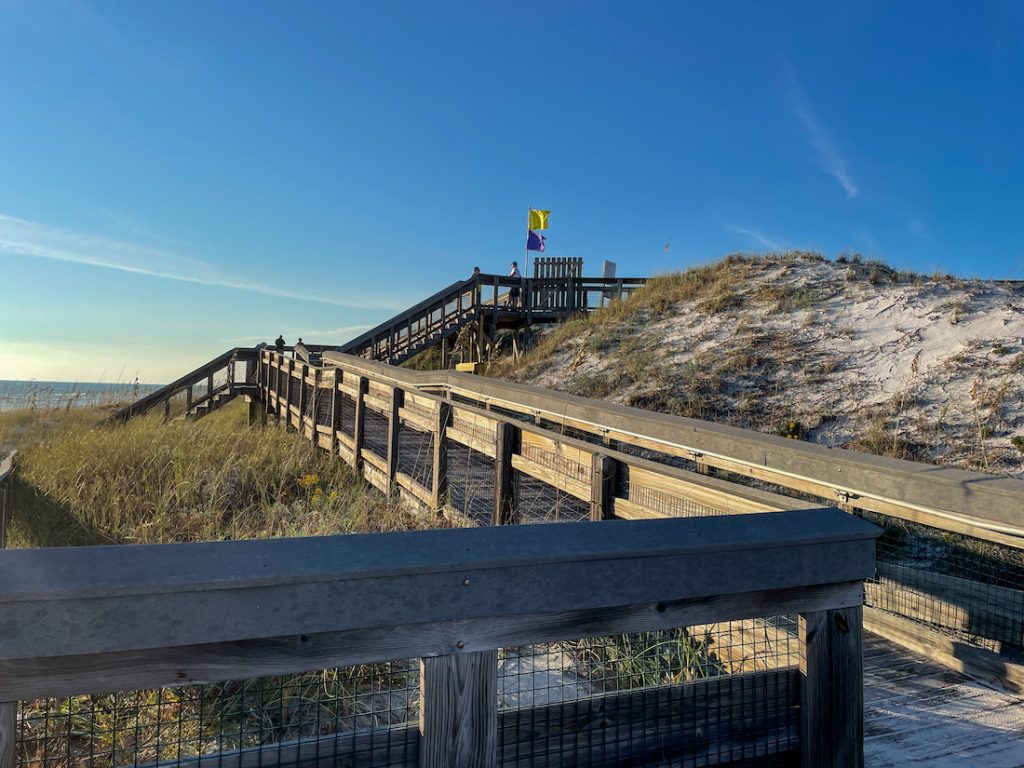 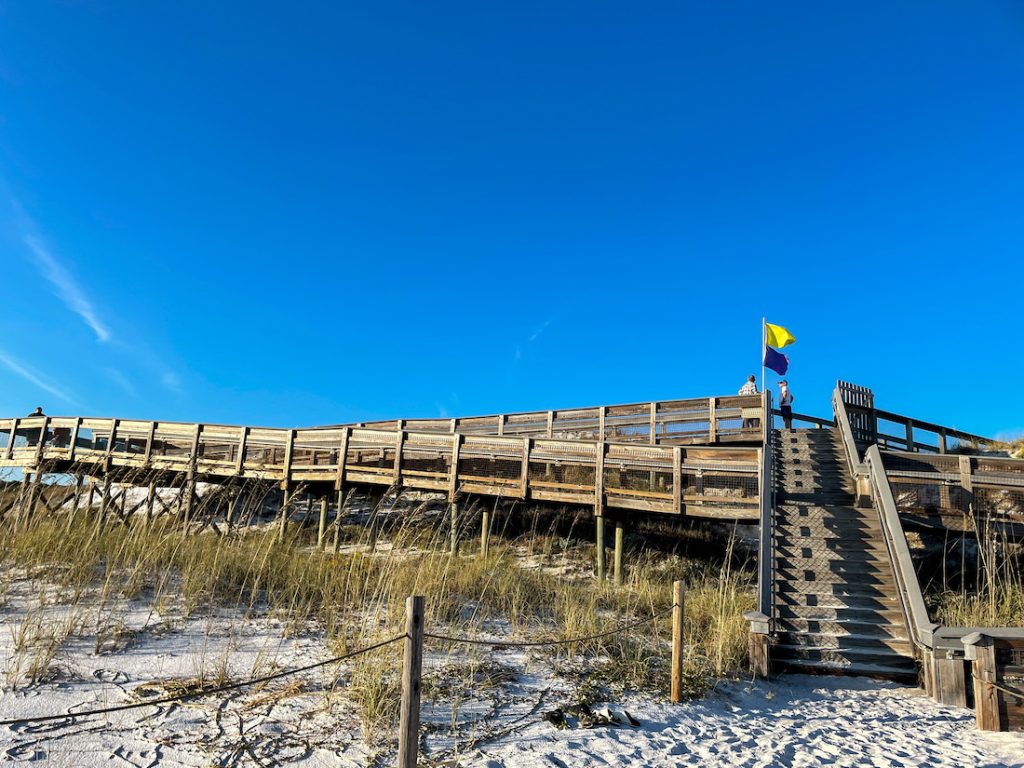 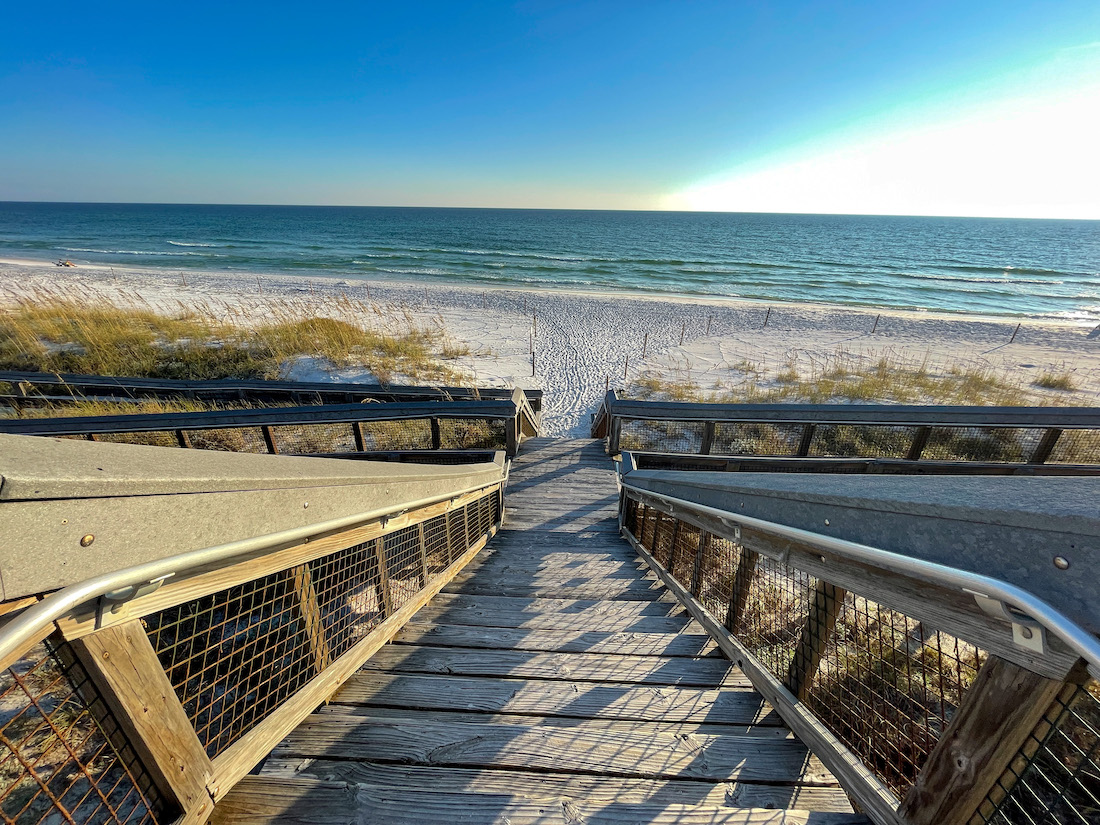 The “beach side” of Deer Lake State Park – that part on the south side of Scenic Highway 30A – encompasses 139 acres, including most of Deer Lake itself.

You’ll find one of Deer Lake State Park’s most famous features here on this southern side of the road: a stunning quarter-mile-long boardwalk that meanders just above an undisturbed and other-worldly landscape. Granted, this sandy stretch is not optimal for lugging tons of beach chairs, coolers, sand toys, and umbrellas from trunk to sand, but that’s okay. Think of this as the beach boardwalk less traveled.

When you do finally reach the beach, you’ll witness glorious, rolling white hills of sand, scrub brush, and plant and animal species that have been all but eradicated from neighboring shorelines. There’s a half-mile of protected beach here, and if you’re lucky, you can often enjoy the blue-green surf all to yourself. 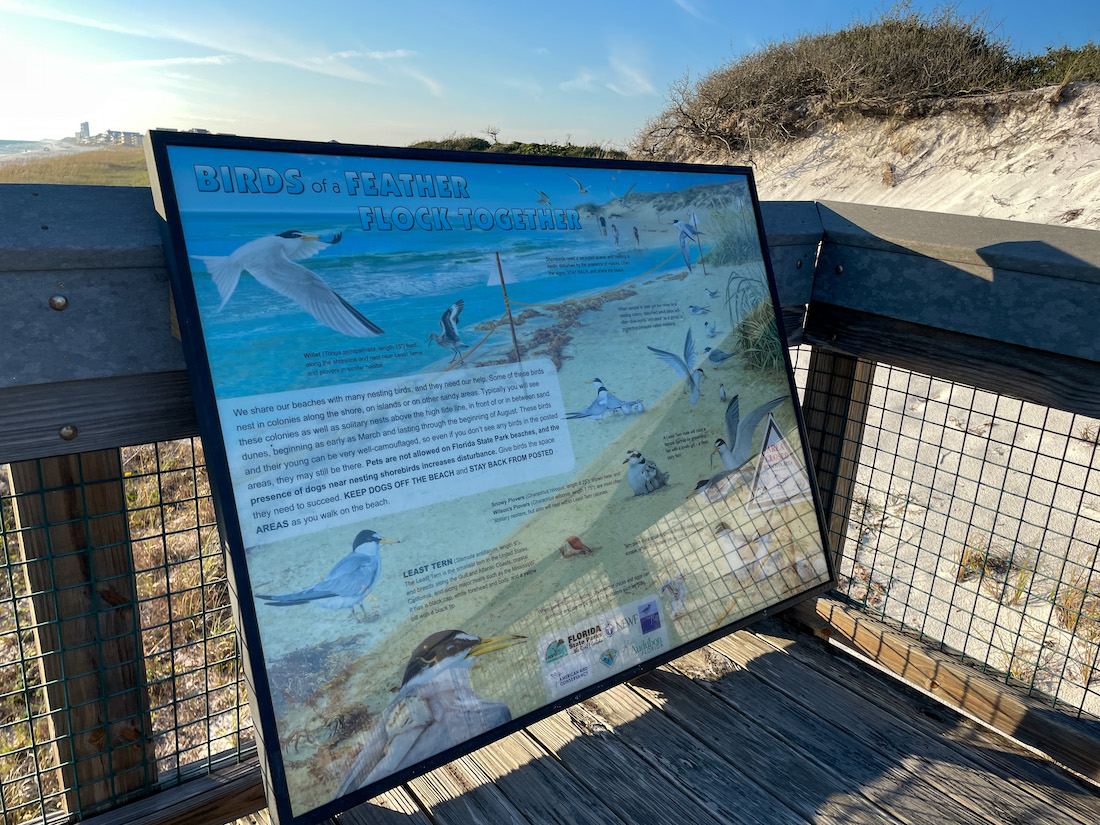 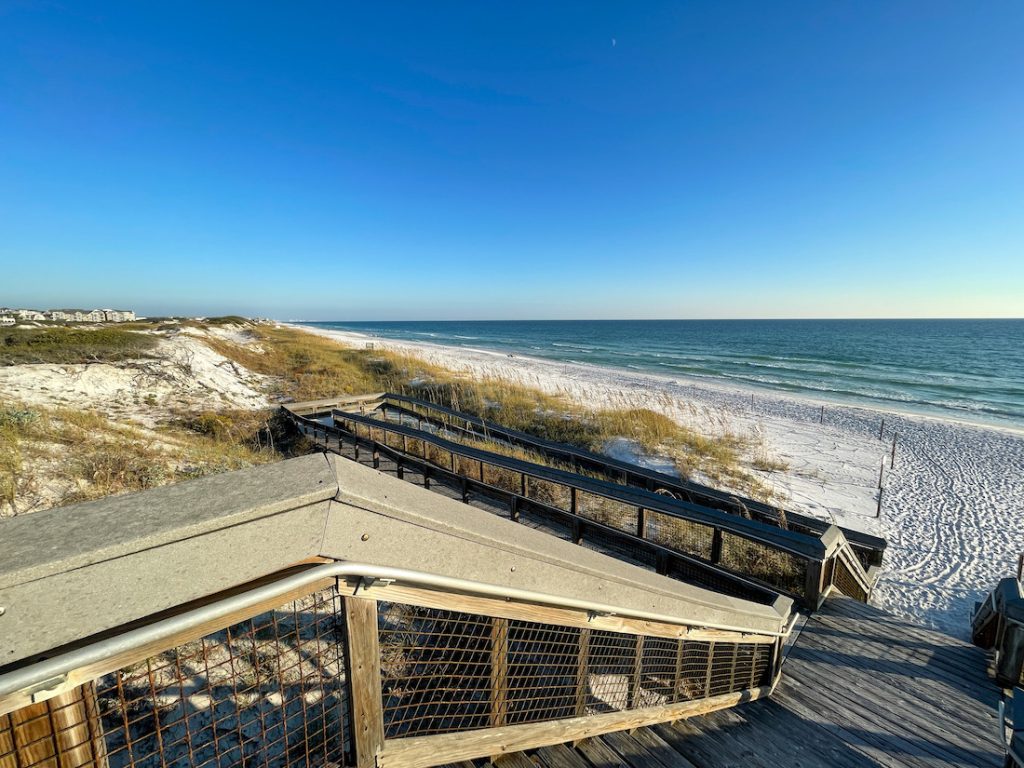 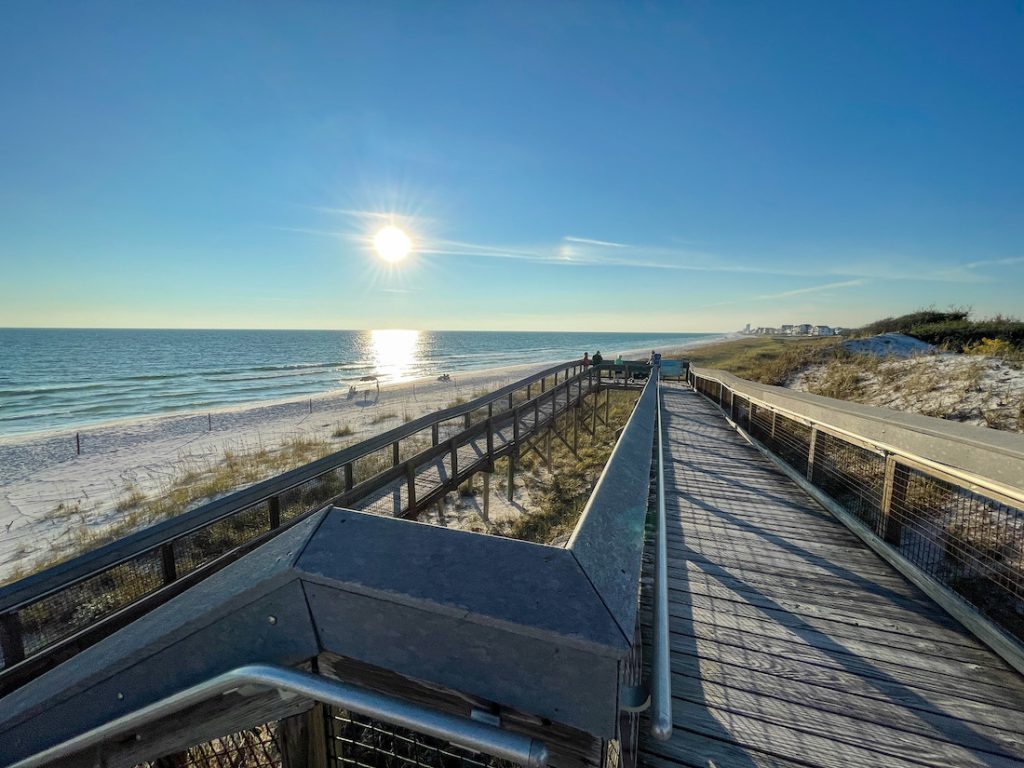 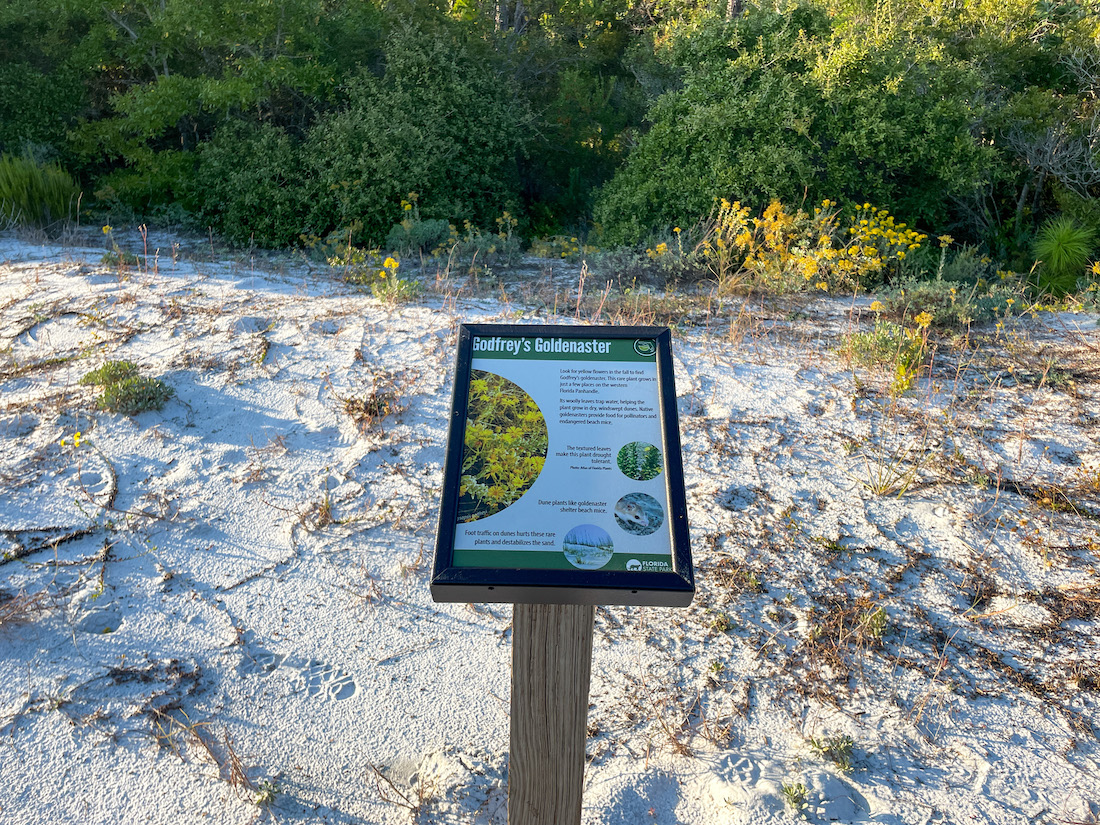 Which is perhaps why this place was once known as the local “nude beach.” But if you’re into voyeurism, you’ll need to stick to bird-watching here. These dunes and trees are home to piping plovers, blue herons, reddish egrets, white ibis, and black skimmers, among others.

You can also fish here, with a permit, so bring a line or cast net if you like. But we strongly recommend clothing anytime hooks are involved.

While the boardwalk and beach draw all the oohs and aahs, the bulk of the park – about 1,870 acres – is actually located on the north side of Scenic Highway 30A.

There are 1.5 miles of hiking trails to traverse. The main trailhead connects to two shorter trails… the one-mile-long ORANGE trail, which winds through restored wet prairies and a pine leaf forest… and the BLUE trail, which takes visitors half a mile around the northern shore of Deer Lake. 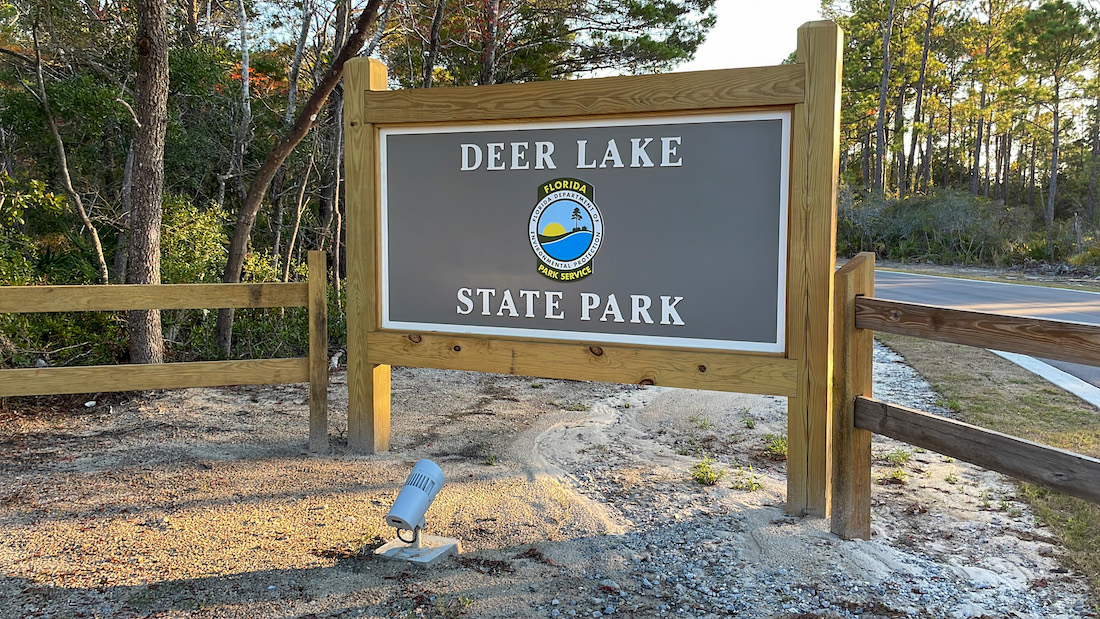 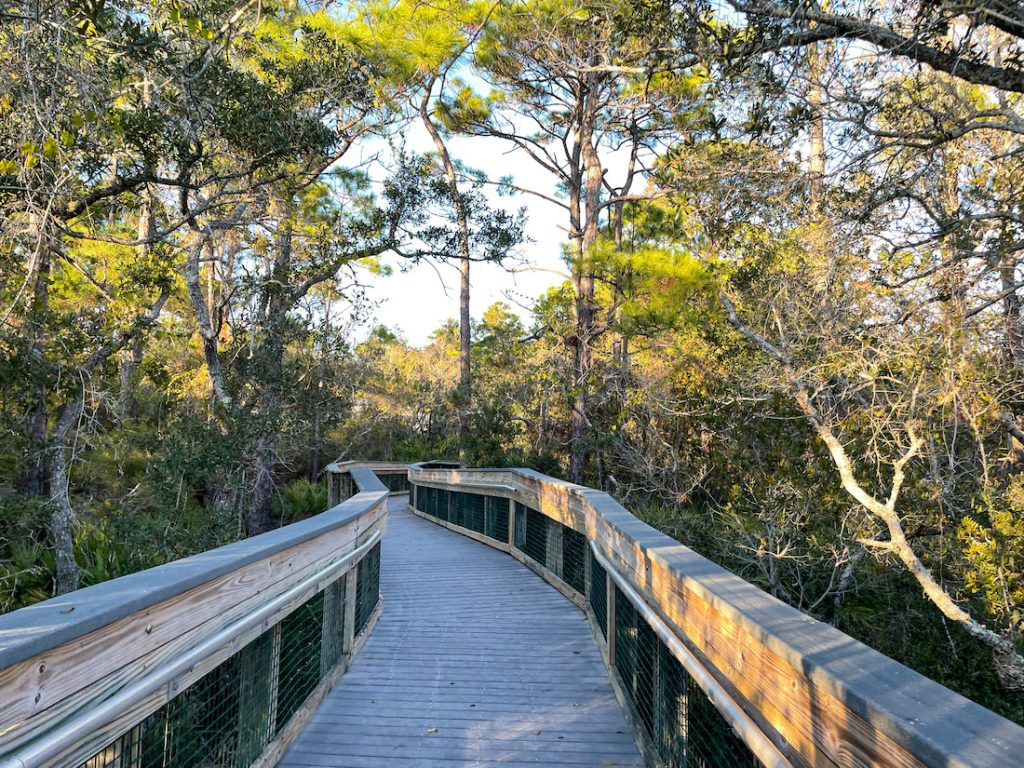 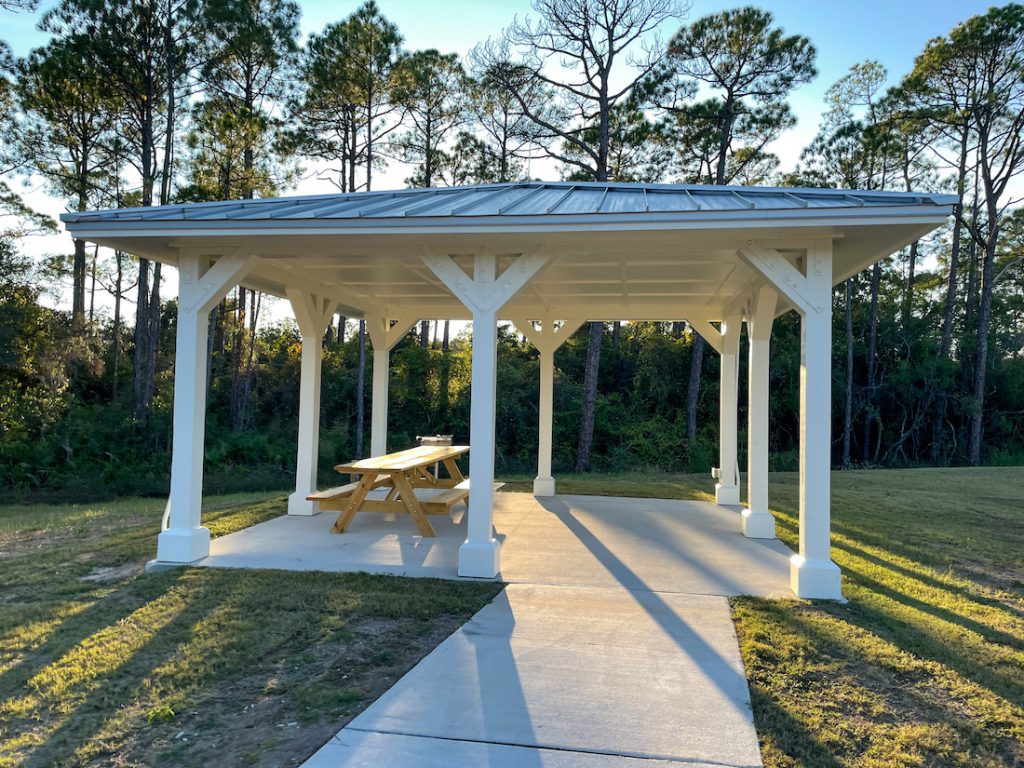 In 2013, the Florida Park Service, U.S. Fish, and Wildlife Service, National Fish and Wildlife Foundation, and the Atlanta Botanical Garden began a project to restore more than 300 acres of wetlands at Deer Lake State Park. The project aims to create the proper ecosystem for plants that had previously been entirely lost or reduced to just a precious few.

One of these plants is the pitcher plant, a native carnivorous tree that lures, traps, and eats insects. With seeds collected from the park, the Atlanta Botanical Garden has grown more than 74,000 pitcher plants and re-introduced them back into Deer Lake’s wet prairies.

Deer Lake State Park’s modest entrance fee is still paid through an honor box at the entrance. At least that hasn’t changed. The park is open every single day of the year from 8 a.m. until sundown.

Don’t blink though… or you might just miss it.