8 Interesting Facts About Orcas - 30A 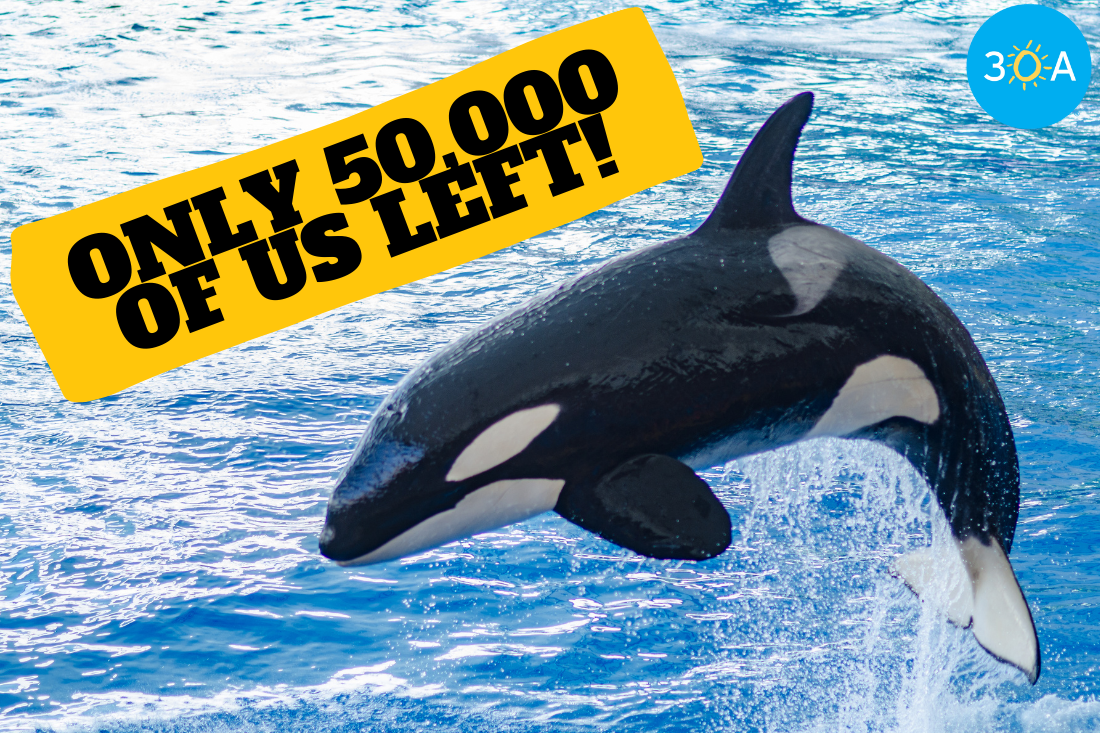 For as long as humans have traveled by sea, they’ve been fascinated by orcas. With their distinct black and white pattern, orcas are easily identifiable. Commonly called killer whales, they’ve existed for millions of years, yet we still don’t know everything about them and how they think.

To better acquaint you with this social-loving denizen of the deep, we’ve compiled some facts everyone should know about this star of the aquatic world.

Researchers have noted orcas like music, such as violins and flutes, and some seem to have a sense of humor. And like humans, the different pods of orcas show varying diets, cultures, and behaviors. Even our lifespans are fairly similar. Female orcas have the potential to live up to 90 years, while males have a maximum lifespan of 60 years. Females orcas are also like us, human ladies, in another way – we’re both one of few mammals to go through menopause.

2. Ignore Their Name: They Aren’t Whales

Although they are called killer whales, they are members of the dolphin family. They’re the largest species of dolphins, growing anywhere from 23 to 32 feet. That’s much bigger than bottlenose dolphins, which generally are only 8 to 9 feet long.

3. Confusion Earned Them Their Name

The name killer whale sounds intimidating and might paint a portrait of orcas as uncaring murder machines ripping apart anything that crosses their paths, but that couldn’t be further from the truth. They very rarely attack humans and are kind to members of their own species. They are, however, the apex predator of the ocean, receiving their name because they kill whales. As lore has it, the name given to them by sailors – the killer of whales – got mixed up and they became known as killer whales.

Killer whales are unique in that they can be found in every ocean in the world. They swim around in the open ocean as well as coastal waters. Orcas are the only aquatic mammal found in every ocean and are the most widely distributed mammals on earth, except for humans. 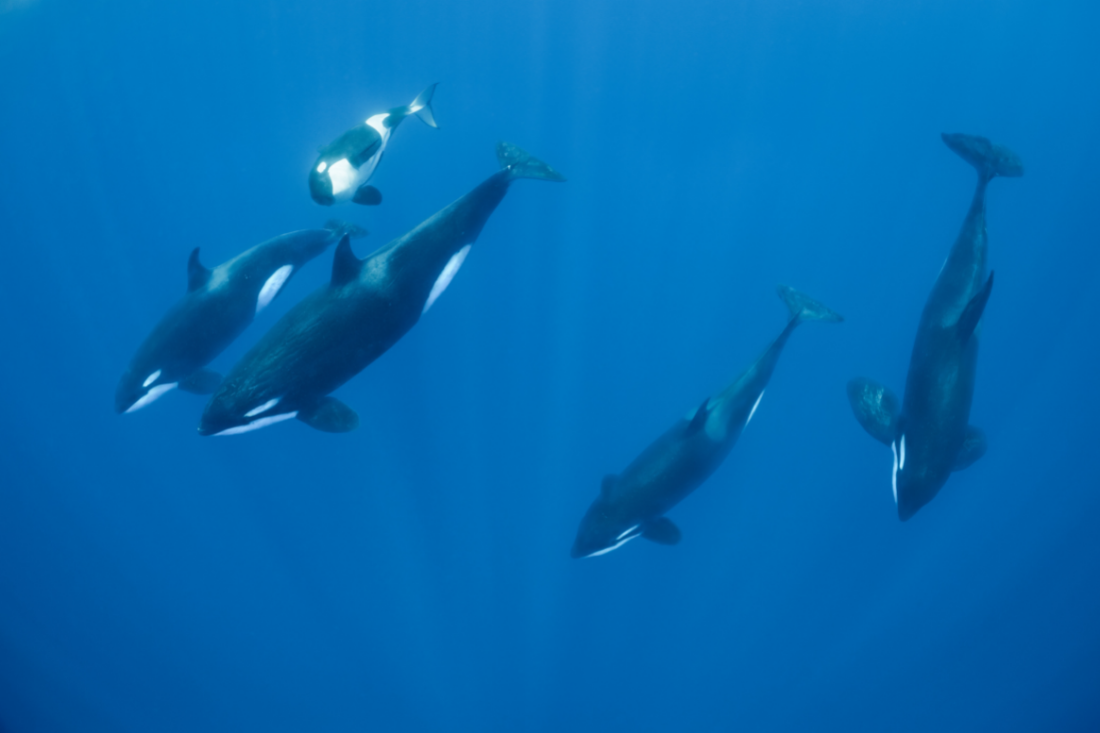 Female orcas have long pregnancies (15 to 18 months) and only give birth to one calf at a time. They enjoy close relationships with their offspring, though.

Adult human children who continue to live with their mothers are sometimes given the “failure to launch” label, but in the orca world, it’s the norm. Male and female orcas live with their moms for life, finding breeding opportunities as they go along and briefly separating from the pod before rejoining them. These female-led pods also include grandmothers who help teach and watch over their grandchildren.

While growing to a length of 32 feet is impressive, it certainly doesn’t make them an ocean behemoth when compared to other creatures of the deep. Humpback whales, by comparison, can grow up to 52 feet, whale sharks can reach 40 feet, and blue whales can reach an astounding 102 feet long. What makes killer whales apex predators is their ability – not their sheer size.

Unlike toothless whales, orcas have extremely sharp teeth, measuring about three inches in length. They’re ideal for tearing into their prey. But even more than this, it’s the teamwork they use while hunting and their intelligence that make orcas so dangerous to other aquatic life. 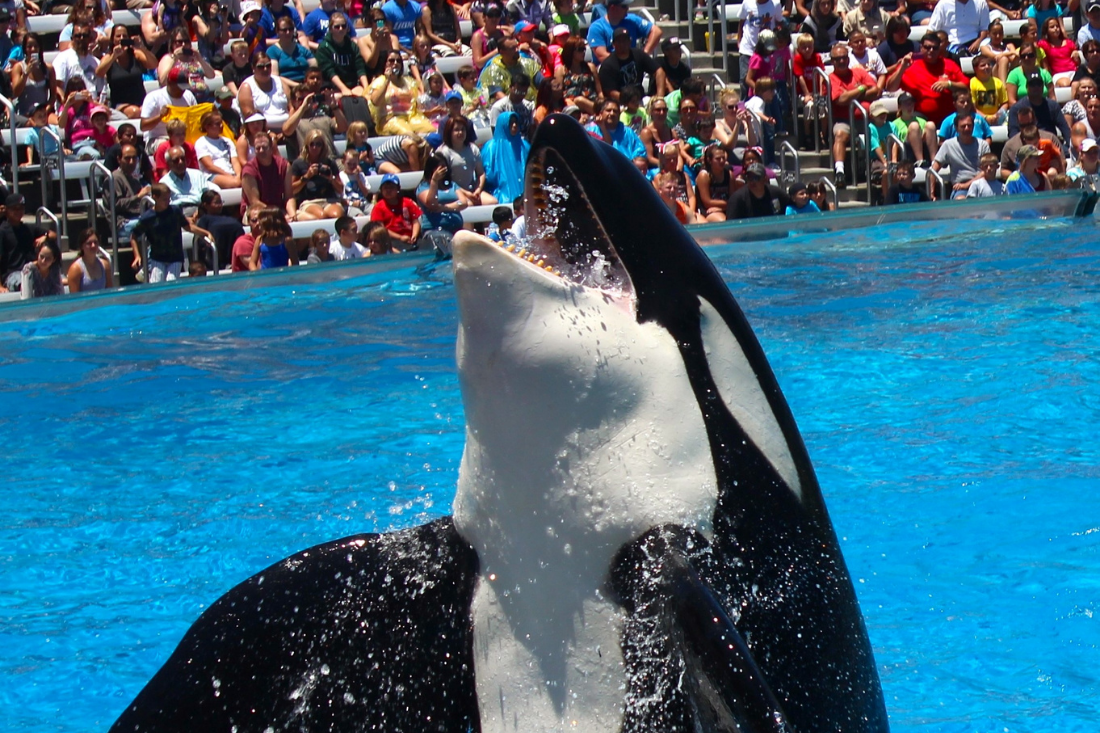 As an apex predator, you might think killer whales have it made. But they are facing several threats to their existence and overall well-being as a species and are protected through the Marine Mammal Protection Act. Some experts worry that the dwindling population of killer whales may result in eventual extinction if more measures aren’t taken to protect them. Although it’s understandably hard to get a headcount, researchers estimate that there are approximately 50,000 killer whales remaining.

Orcas are endangered for multiple reasons – low levels of prey, high amounts of contaminants like oil spills and polychlorinated biphenyls (PCBs), and the sound and pollutants from passing shipping vessels. Killer whales are ingesting PCBs through their food sources such as salmon, sharks, and tuna. The PCBs, once ingested, have a negative impact on the killer whales’ immune systems and reproduction.

8. The Brains of Orcas

Orcas may be big, but they aren’t slow – physically or mentally. They can reach swimming speeds of 28 miles per hour, and they have the distinction of having the second-largest brain of all the mammals in the ocean. Their brains can weigh up to 15 pounds, and they have a large brain-weight to body-weight ratio, which can be an indicator of great intelligence.

One of the more fascinating aspects of a killer whale’s intelligence, according to some researchers, is that it can communicate by using pulsed calls and whistles, use echolocation, and can learn its own form of language that is kept for generations in its family.