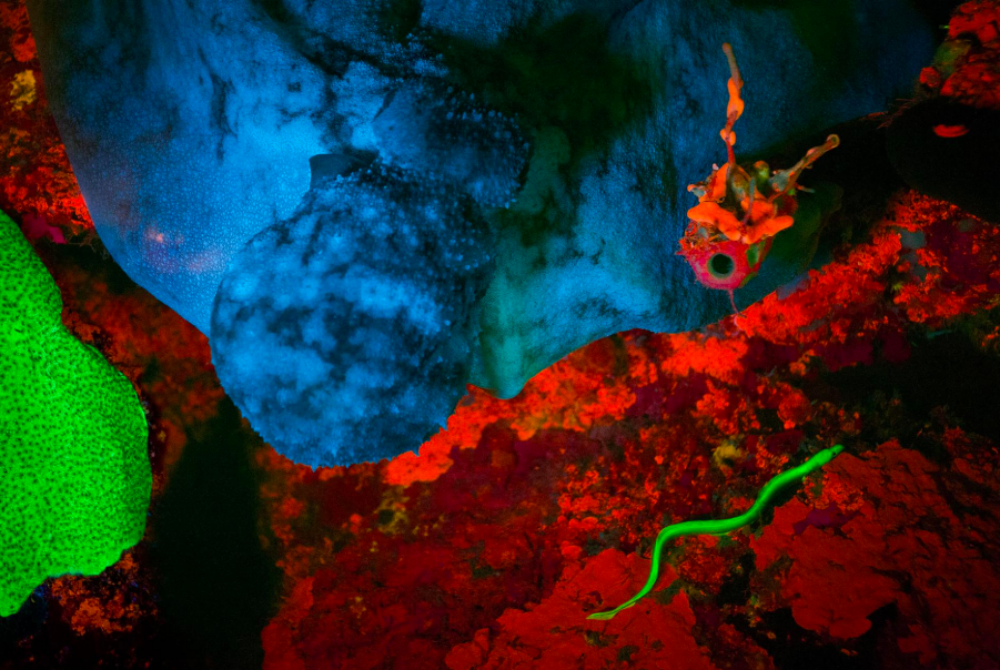 The photo that started it all: In 2011, a reclusive Kaupichphys eel photobombed David Gruber off Little Cayman Island. Photo by: Jim Hellemn

The inky ocean darkness is hiding a rather enchanting secret, something marine biologist and National Geographic explorer David Gruber discovered purely by accident when an eel let the cat out of the bag in the Caribbean.

While taking photos of biofluorescent coral on a 2011 dive off of Little Cayman Island, a neon green eel’s glow stole the show by photobombing Gruber’s shot. Until this living glowstick unwittingly revealed itself, scientists did not know that biofluorence, which was known to be common in algae and coral, was also present in some fish. With this new discovery, marine biologists set out to see if there were more fish lighting up the deep in disco fashion.

They have since found over 180 species shining their biofluorescent neons.

Where bioluminescence is akin to breaking a child’s glow stick to emit light, biofluorence would be similar to shining a black light on fluorescent paint.

Of course, human eyes can’t detect the lit-up disco of colors. To join the party, we need to set the scene in a night dive. Biologists use high intensity blue lights that imitate the ocean’s natural light waves to activate the biofluorence.

Once activated, we still can’t see the show without special cameras that make the neon greens, reds, and oranges pop for our human eyes…cameras with yellow filters that mimic the yellow filters found in the eyes of each glowing species.

Here are five party-glowers whose night light secrets have been revealed. 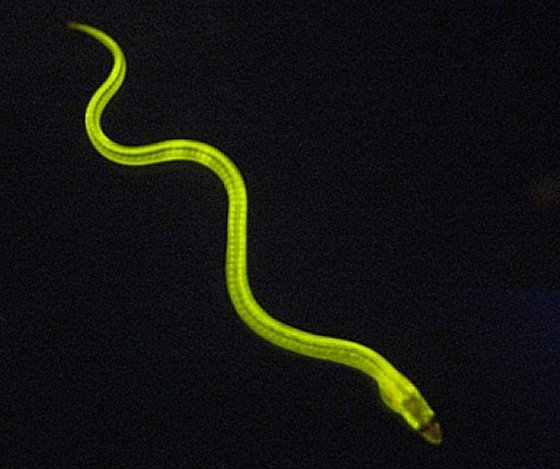 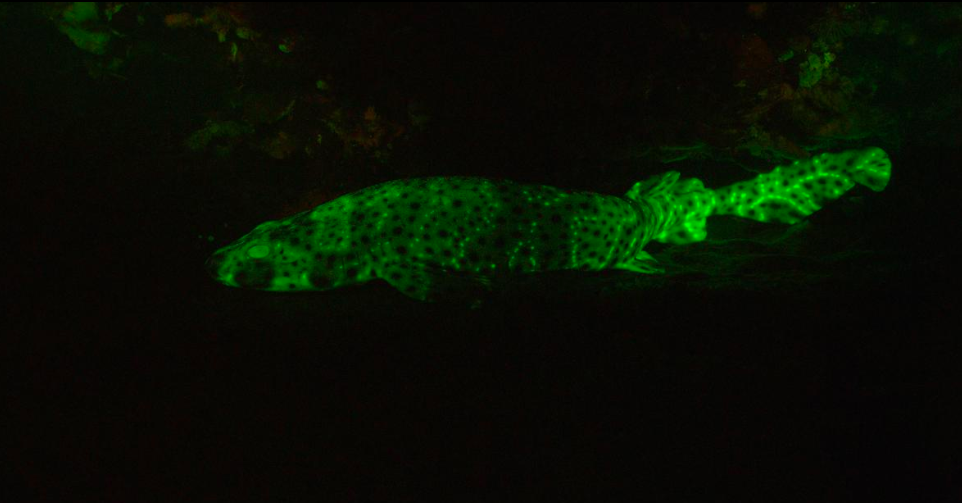 This swell shark off California appears to glow green when seen through a camera that mimicks the animal’s eyes. Photo by: David Gruber 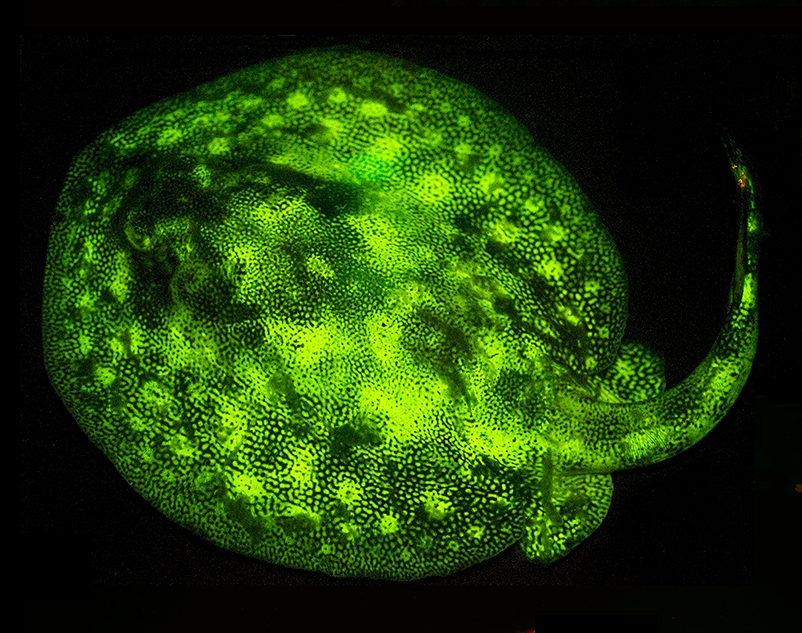 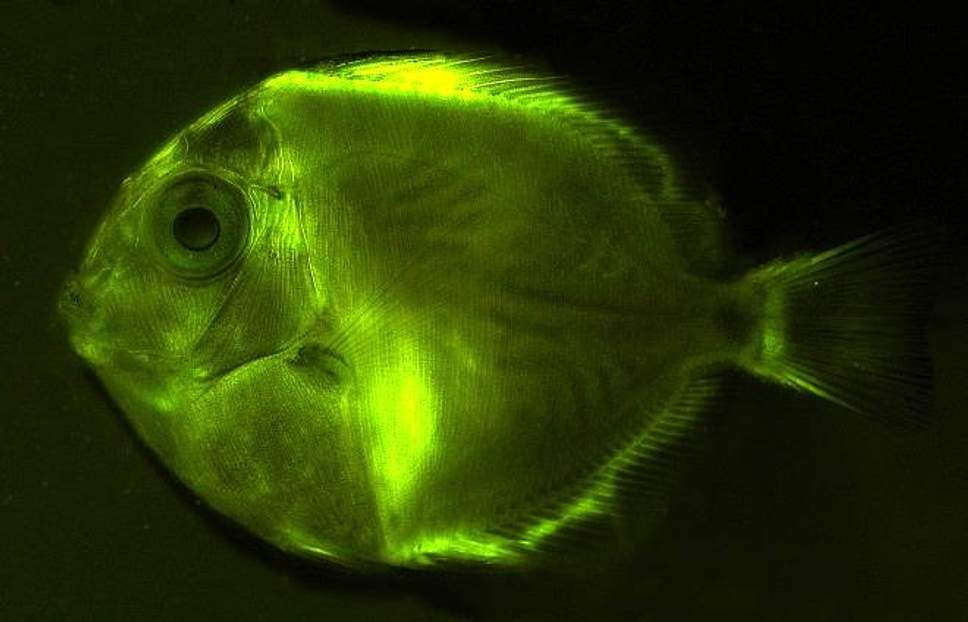 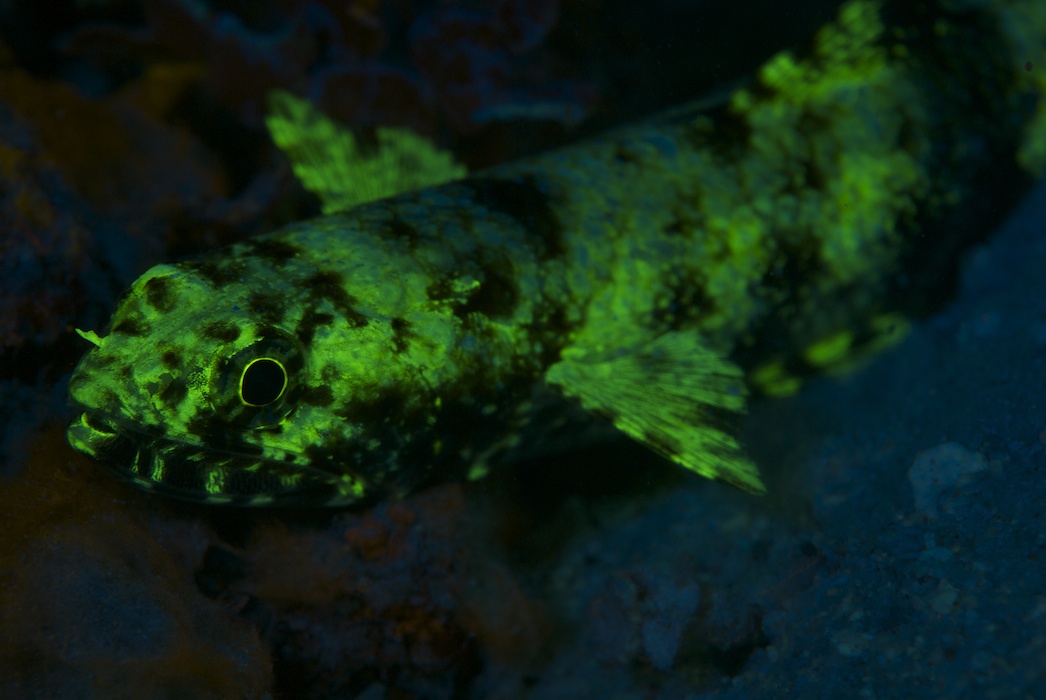 1. False Moray Eel: Famous for spilling the neon beans, this is the tropical species that revealed the disco down under to land dwellers. Averaging 6-8 inches in length, it hides in reef crevices and likes to burrow into the sand.

2. Swell Shark:Getting its name from its ability to swallow water and double in size as a defense mechanism, this harmless shark also lights up the party with its ghoulish neon green glow.

3. Yellow Stingray: Frequenting the sandy ocean flats or foraging through seagrass, this ray grows to 14 inches in diameter. While it uses its patterned colors for camouflage by day, its biofluorescent abilities transform it into a dazzling glow disc by night.

4. Surgeonfish: Only biofluorescent as juveniles, these fish, also known as tangs, earn their name from the razor-sharp surgical protrusions on either side of their tails.

5. Lizardfish: This lizard-headed fish grows just beyond a foot long and hides in the sand during the day. But at night, it’s aglow with green.

Scientists suspect communication advantages may be behind the biofluorescent light show, but research is underway to find out more. Whatever the reason for the neon night, the party is no longer invites only thanks to the eel who couldn’t keep a secret.

CHRISTY (CHICK) HUGHES is a freelance writer and a respiratory therapist living in South Walton. She and her husband moved to the beach in 2000.  One sunset…and the couple never looked back. Find her at her blog chickhughes.com.