American Heroes: The Blue Angels - 30A 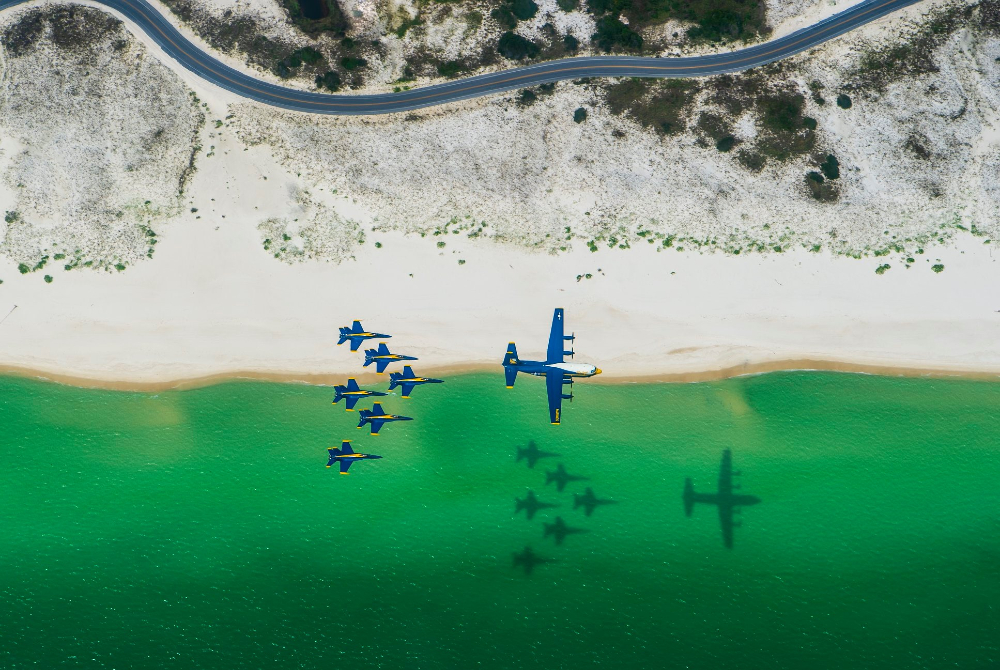 This article appears in the inaugural issue of 30A’s Beach Happy Magazine. Look for Beach Happy magazine at Barnes & Noble, Books-A-Million, Publix, Kroger, and other major outlets nationwide, as well as in high-traffic locations along the Gulf Coast. Subscribe now to get print issues delivered to your home or enjoy the free digital edition.

So far, 2020 has played out like a really bad sci-fi flick. Recent events have been so extraordinary that any 2020 screenplay would likely have been rejected by movie studio execs as “too unbelievable.” I’m sure that’s how the war-weary citizens of Europe felt in the late 1930s when Germany began to plow through Poland and France, setting a tragic stage for the largest conflict our planet has ever known.

“Is this really happening?”

Yeah, it was. And yet, despite the deep and lingering fatigue carried over from the first World War, those bewildered men and women rose up to boldly confront the terrible new threat at hand, much like the First Responders who are tirelessly working on the front lines today to combat a deadly pandemic that’s already claimed hundreds of thousands of lives worldwide.

If you’re not mentally prepared to win, you probably won’t. 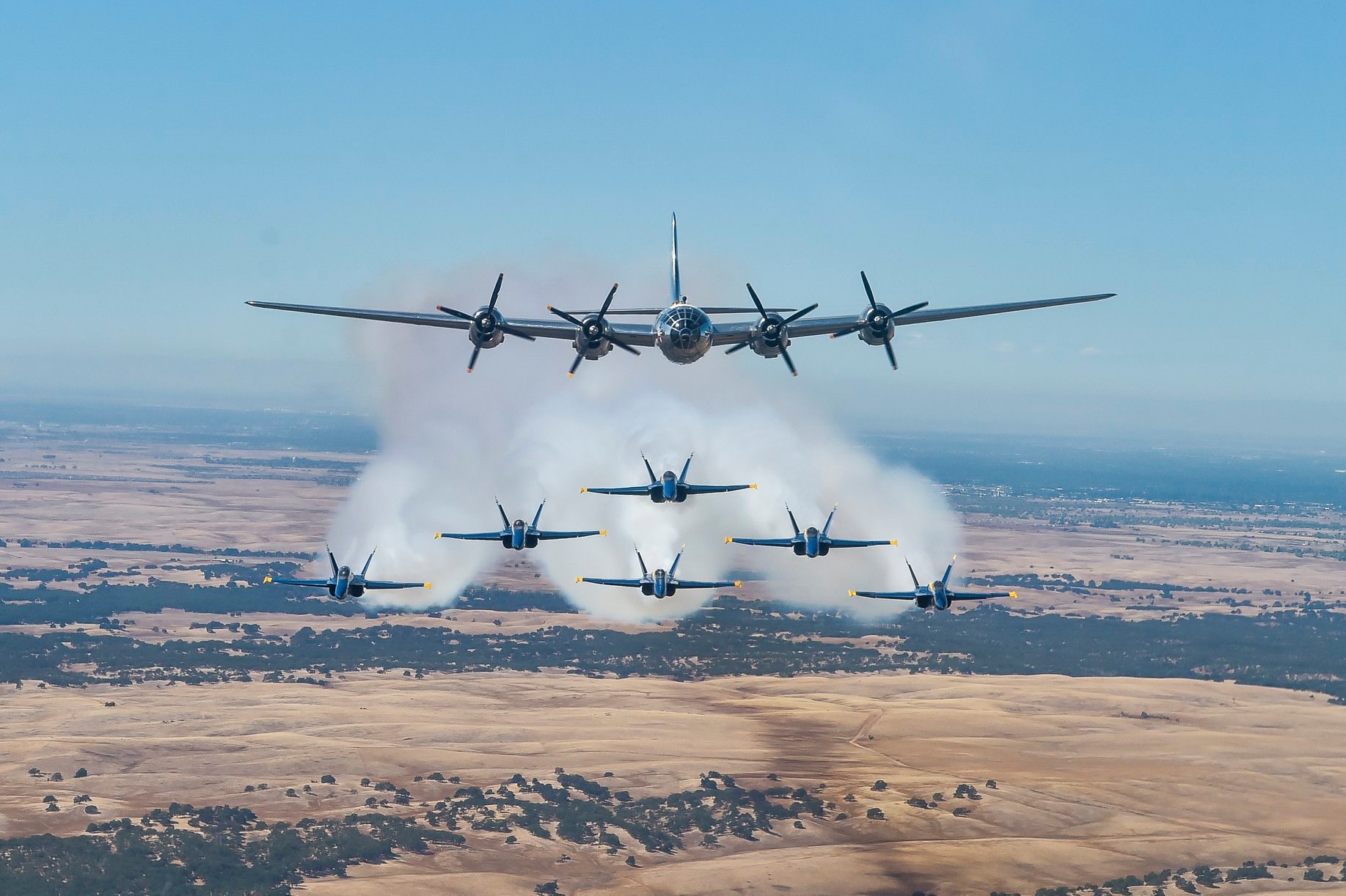 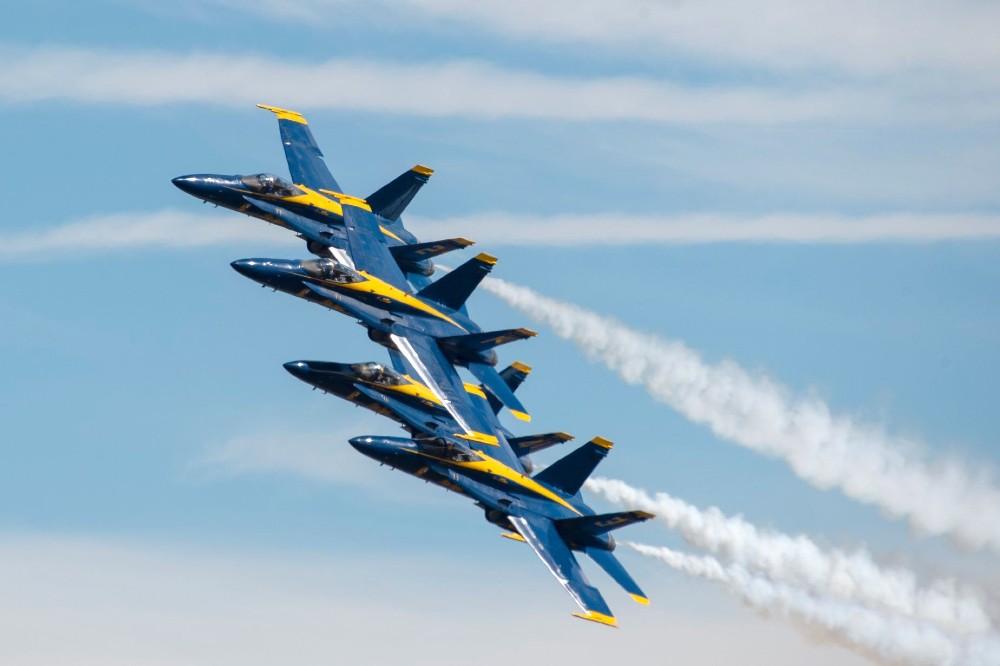 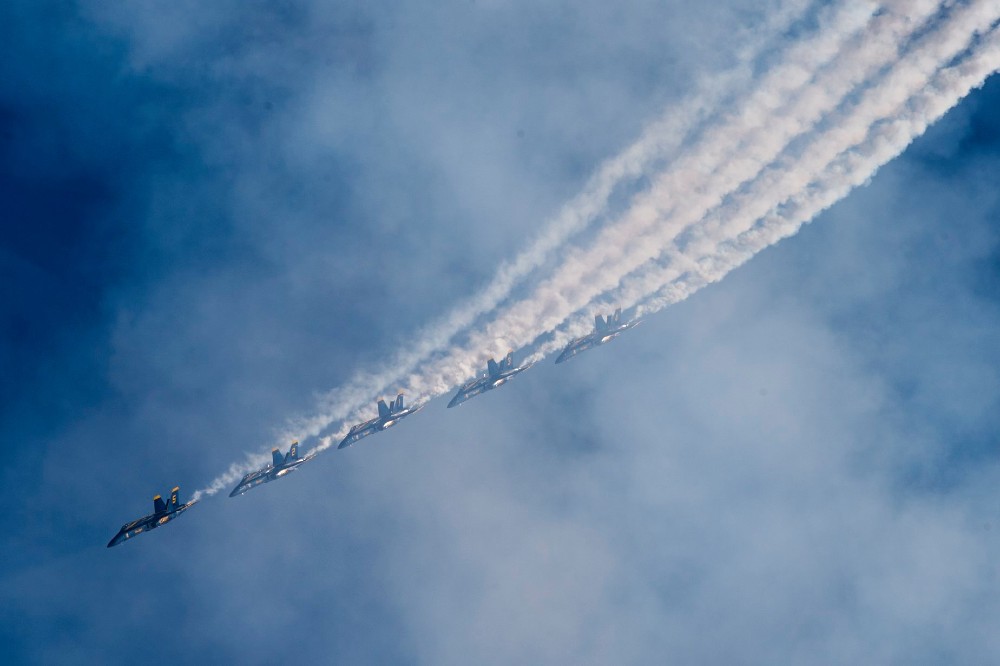 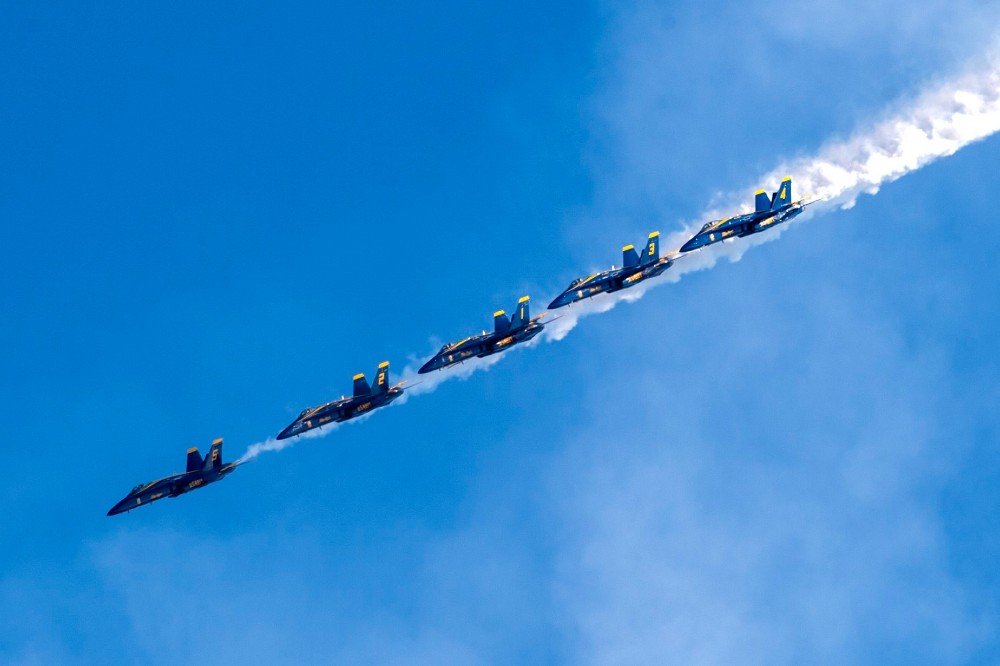 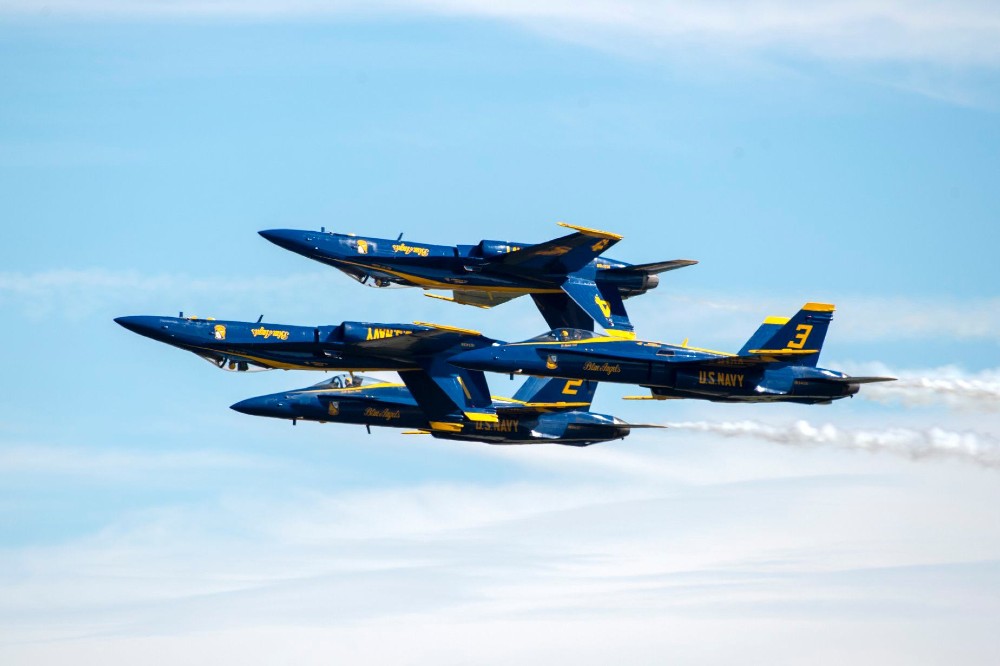 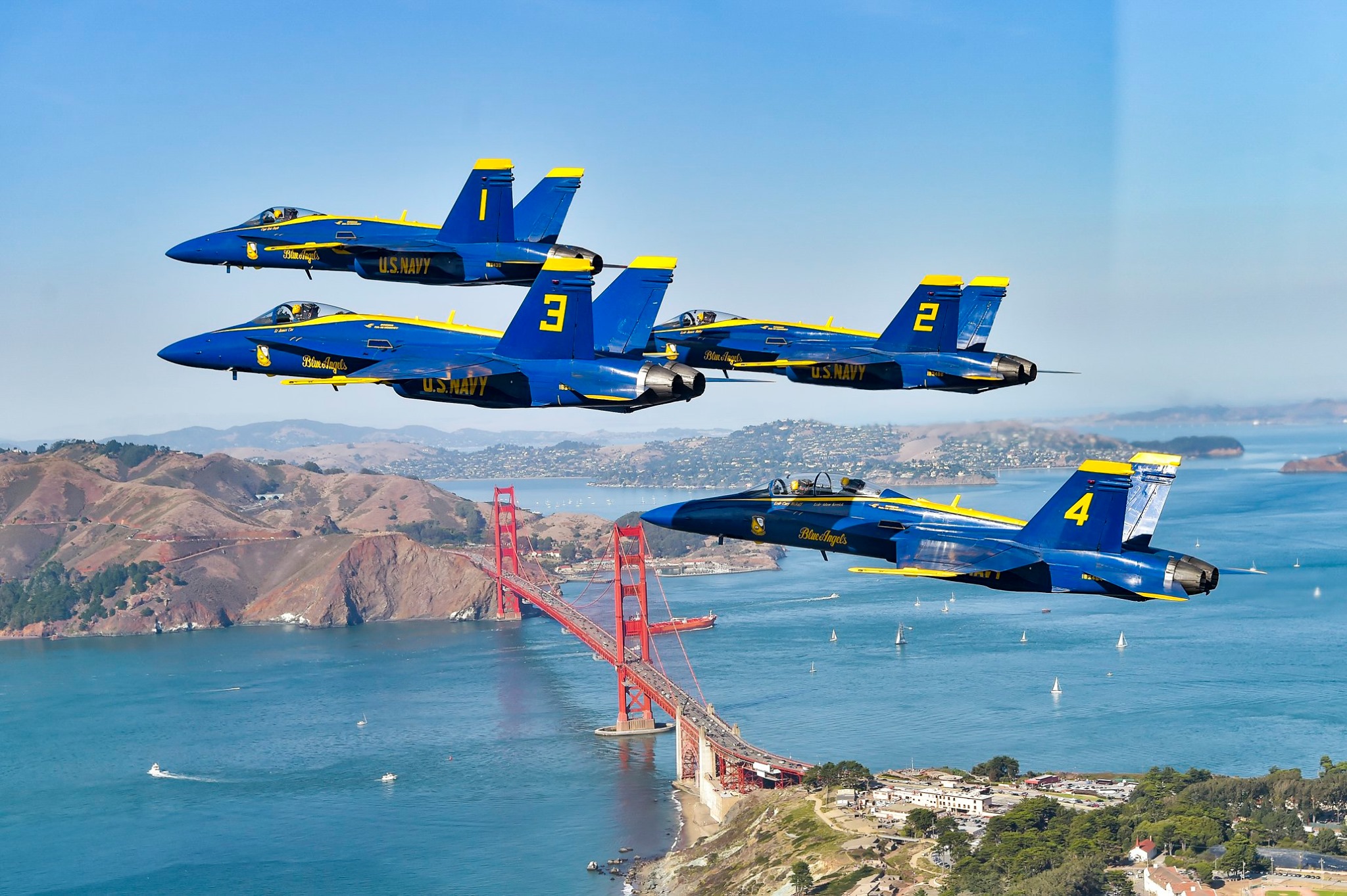 At the end of World War II, the Chief of Naval Operations, Admiral Chester W. Nimitz, called for the formation of an elite flight team intended to encourage national patriotism, to garner public interest in aviation, and to help keep American morale sky-high. The original “Navy Flight Exhibition Team” (as they were called internally at the time) held its inaugural flight demonstration on June 15, 1946, at the Naval Air Station in Jacksonville, Florida. Later that same year in Nebraska, the team was introduced to the wowed crowds as “The Blue Angels.” The name stuck.

Some 74 years later, the Blue Angles have performed for more than 500 million fans across the U.S. and around the globe, helping boost morale and pride, especially during tumultuous times.

For example, the Blue Angels recently conducted a special series of hospital fly-overs across much of the country, to help show our nation’s support of those who are working non-stop to battle the COVID-19 pandemic. It might not sound like much – unless you’ve experienced one. These fly-overs are the thing of goosebumps. The powerful roar of the precise formation instantly inspires strength, hope, pride, and support for the many beleaguered workers who simply need to know that what they’re doing matters.

“All the nurses and doctors came outside,” said photographer Fletcher Isacks, who documented one fly-over. “Here they were the ones being honored, and yet they were out there in the parking lot cheering on the Angels. It was as if that one salute brought everyone in the nation together, if only for a few moments.”

As a military historian, Isacks has been to countless air shows over the past 20 years.

“I’ve seen every aircraft the U.S. employs here along our coast,” said Isacks. “No matter how cool the vintage aircraft are, when the Blue Angels enter the sky, magic happens.”

The Blue Angels currently consist of 130 active-duty Sailors and Marines, each one having served in the Navy or Marine Corps for years before being tapped as members of this elite unit. Every year, the team selects three new fighter jet pilots, two new support officers, and one new pilot for the Marine Corps’ C-130 support plane. As one might expect, the recruitment process is extremely competitive. The Chief of Naval Air Training anoints the Commanding Officer, who must have personally logged at least 3,000 tactical jet flight-hours and must have successfully commanded a tactical flight squadron. The Commanding Officer (or “Boss” as he’s referred to by the team) always flies Jet Number One. The Chief also personally selects the team’s Executive Officer, who must have at least 1,250 tactical flighthours to be considered for that prestigious righthand role. Navy and Marine pilots with aircraft carrier qualification and a minimum of 1,250 tactical jet flighthours are eligible for positions flying the remaining jets. Combined, the team proudly represent all 820,000 active-duty, reserve and civilian men and women who serve in the Navy and Marine Corps. And, just like the many people who visit our Gulf Coast beaches, the Blue Angels hail from every corner of the United States, currently including Officers from Alabama, California, Georgia, Kansas, Michigan, Missouri, North Dakota, Pennsylvania, Virginia, Tennessee, and Texas.

In addition to the precision pilots, the Blue Angels include team members in administration, engineering, medicine, and public affairs, among other fields.

“Since joining the Blue Angels, I have witnessed teamwork to the highest degree,” said Gunnery Sgt. Mike Burgess. “It is truly amazing to see subject matter experts from different platforms come together and accomplish our common goal.” 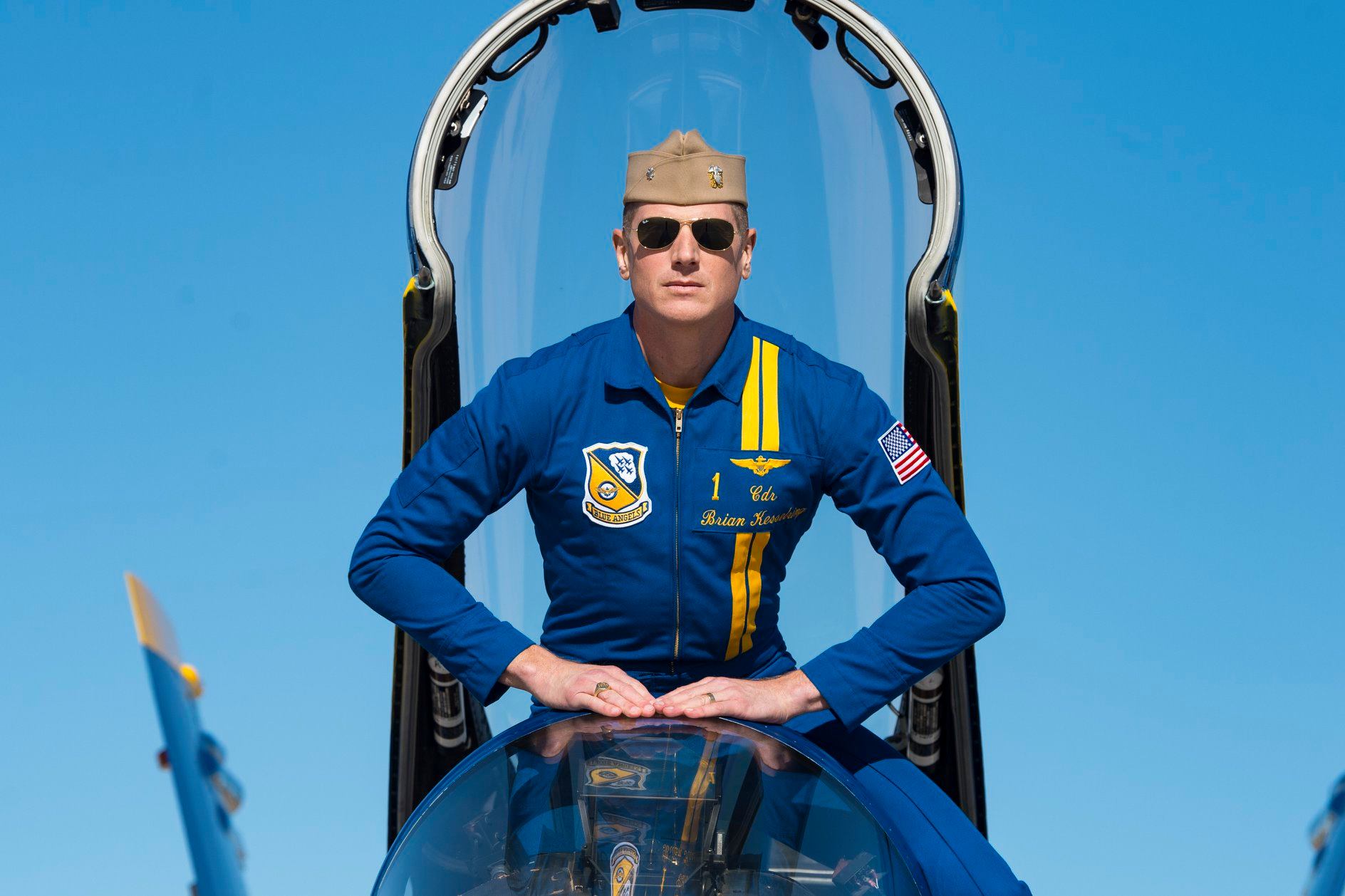 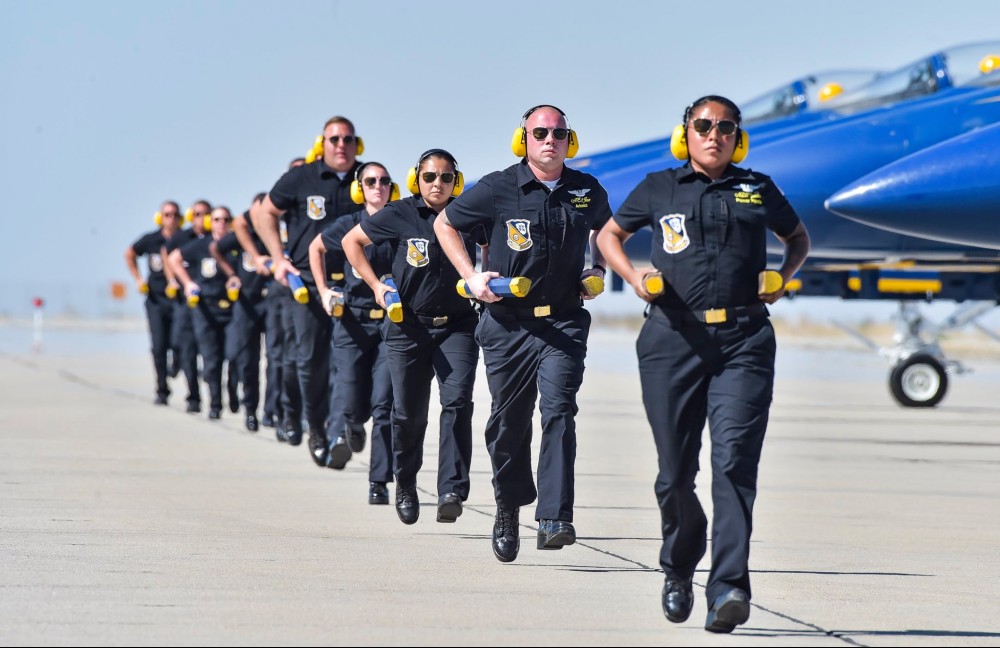 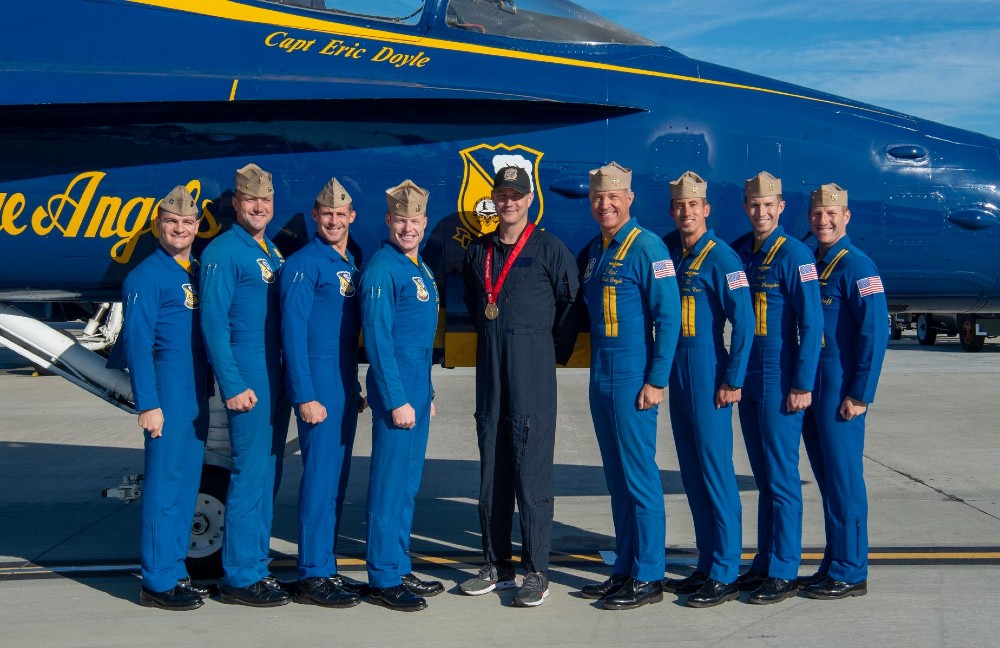 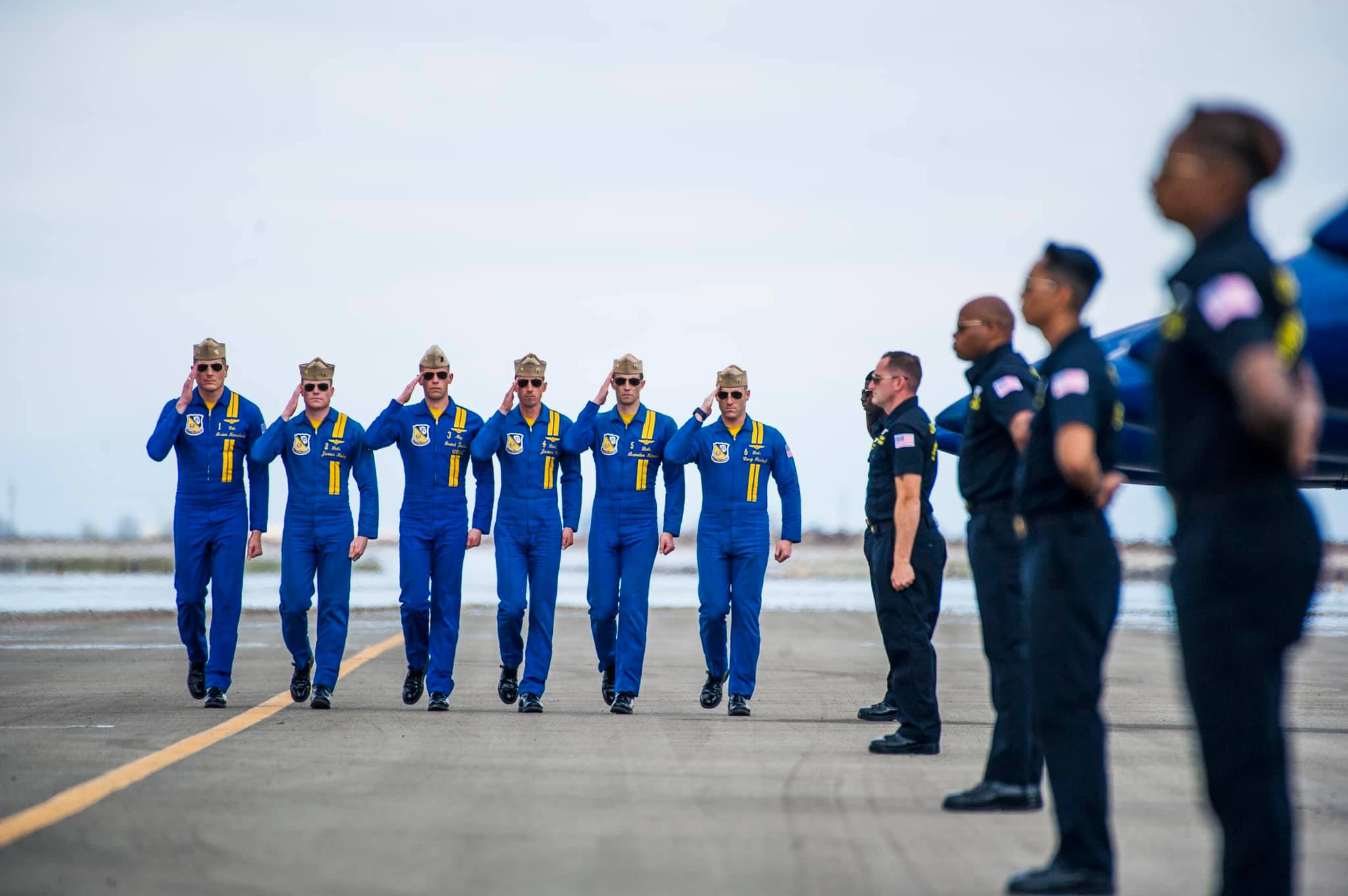 The C-130T Hercules (a beast of a crowd-pleaser, affectionately known as “Fat Albert” because of its jaw-dropping size) is manned by an all-Marine crew that’s responsible for transporting the personnel, supplies, and essential equipment that’s required for each performance. In 2015, Marine Capt. Katie Higgins was selected to pilot Fat Albert, making her the first female Blue Angels pilot.

But the team’s gargantuan mission certainly doesn’t stop in the air.

In addition to their inspiring air shows, the Blue Angels visit schools, hospitals and civic functions, and they partake in countless community outreach programs. Over the years, the unit has volunteered thousands of hours to community service. Regionally, for example, the Blue Angels have helped rebuild our coastal communities in the aftermath of devastating storms, such as Hurricane Michael in 2018.

Though the Blue Angels perform all around the globe every year, their beloved home base is Forrest Sherman Field in Pensacola, Florida. The annual airshow over Pensacola Bay is a deeply held local tradition. It’s their homecoming game if you will. 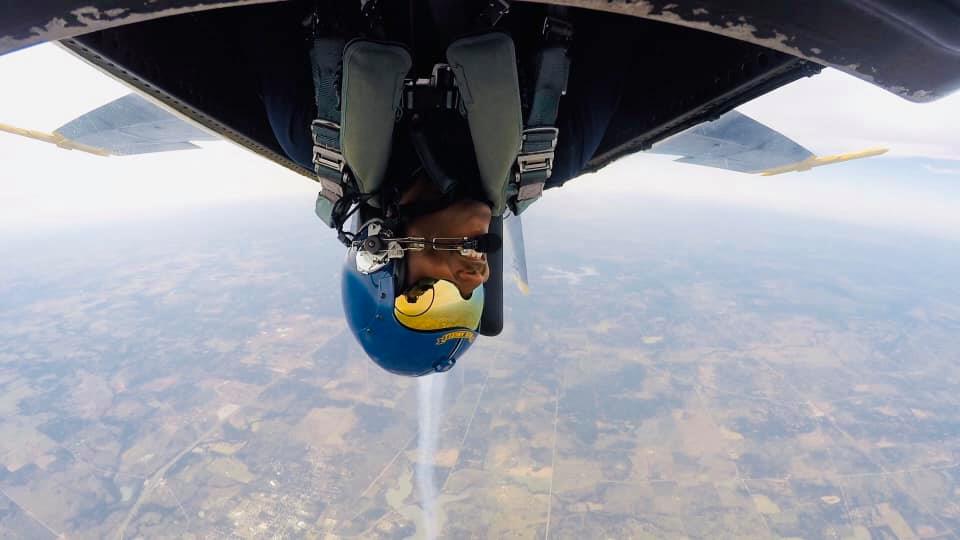 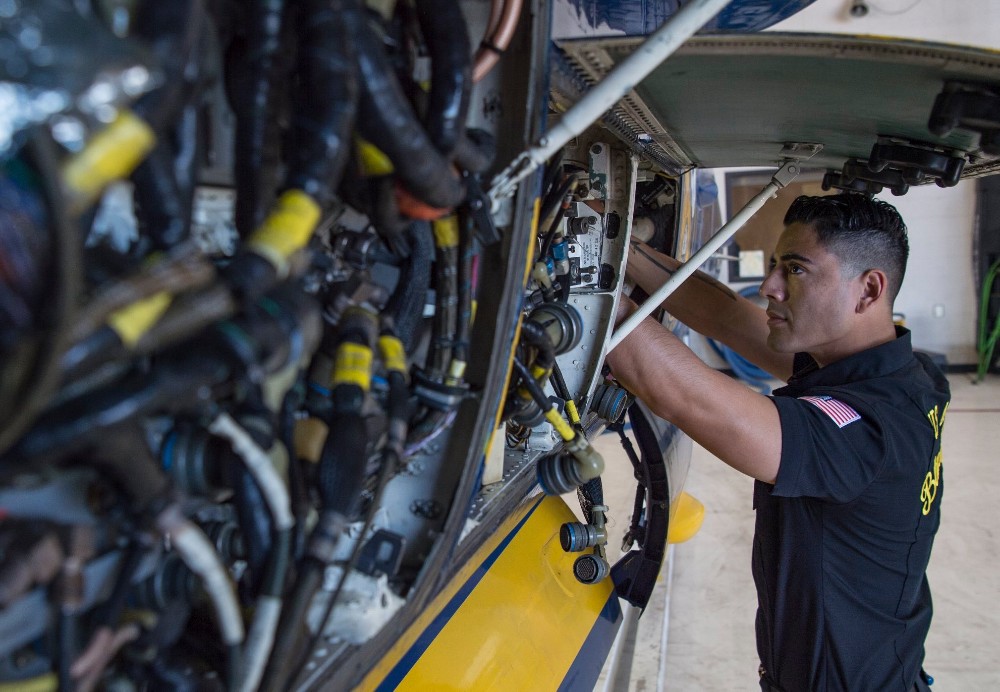 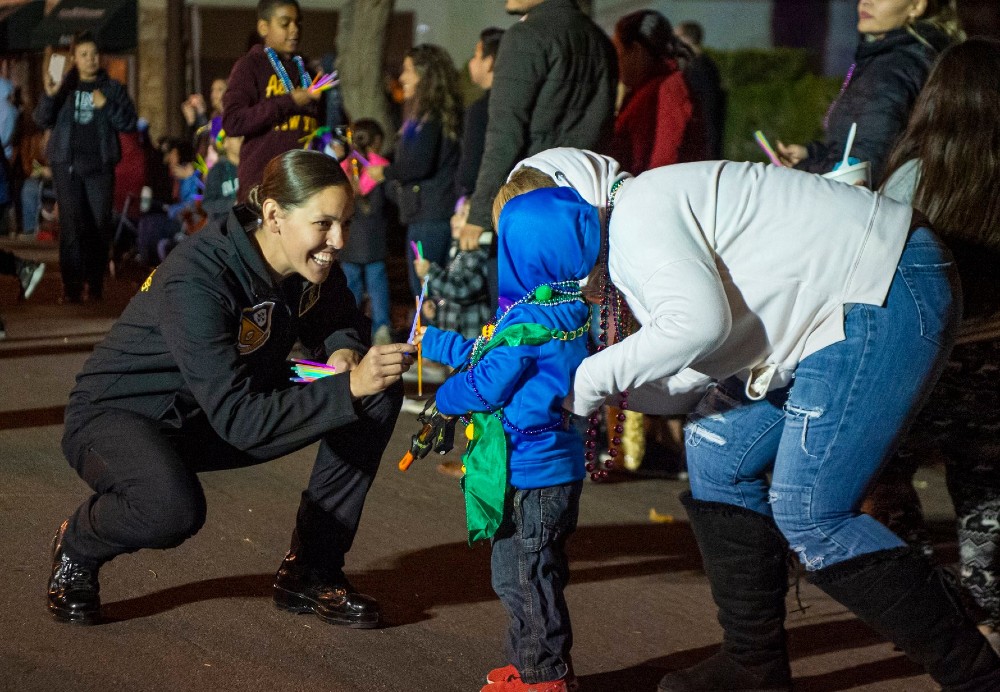 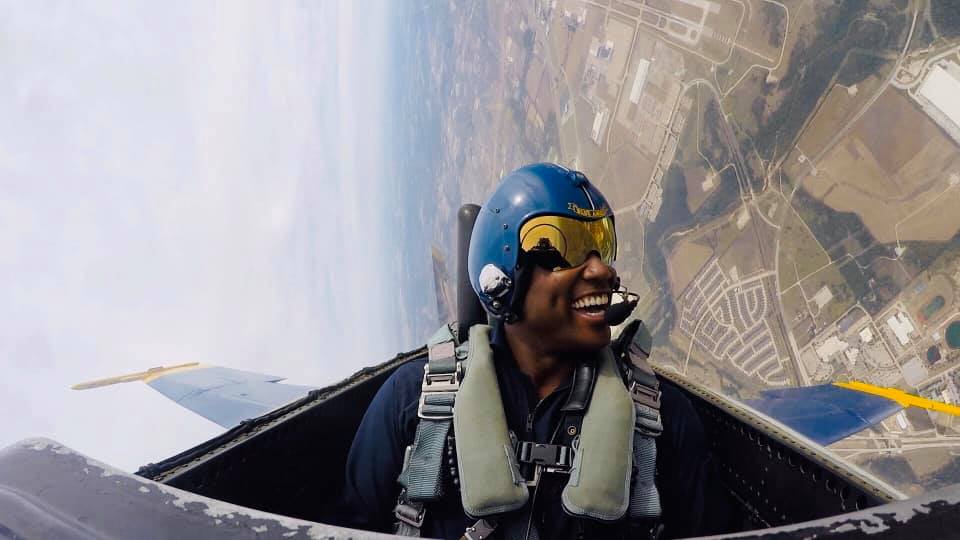 “I take my boat over to watch them every year,” said Wayne Burnette of Crab Island Dolphin Tours. “I wake up that morning like a kid on Christmas day.”

Unfortunately, Wayne’s Christmas was postponed this year, following a statement by the Blue Angels:

“After much discussion and consideration regarding the current rise in COVID cases in our hometown, we have come to the conclusion that canceling our flights during the Pensacola Beach Air Show is the only way we can ensure the safety of our community we love so much.”

Canceling such a deeply revered tradition was no doubt a tough call to make. It’s like a torrential rainstorm rolling through on homecoming day. But hey, the first and most important job of any good Guardian Angel is to look out for our health and well-being. And the Blue Angels take their job very seriously.

This article appears in the inaugural issue of 30A’s Beach Happy Magazine. Look for Beach Happy magazine at Barnes & Noble, Books-A-Million, Publix, Kroger, and other major outlets nationwide, as well as in high-traffic locations along the Gulf Coast. Subscribe now to get print issues delivered to your home or enjoy the free digital edition.