A Global Tour of Hemingway-Inspired Bars – 30A 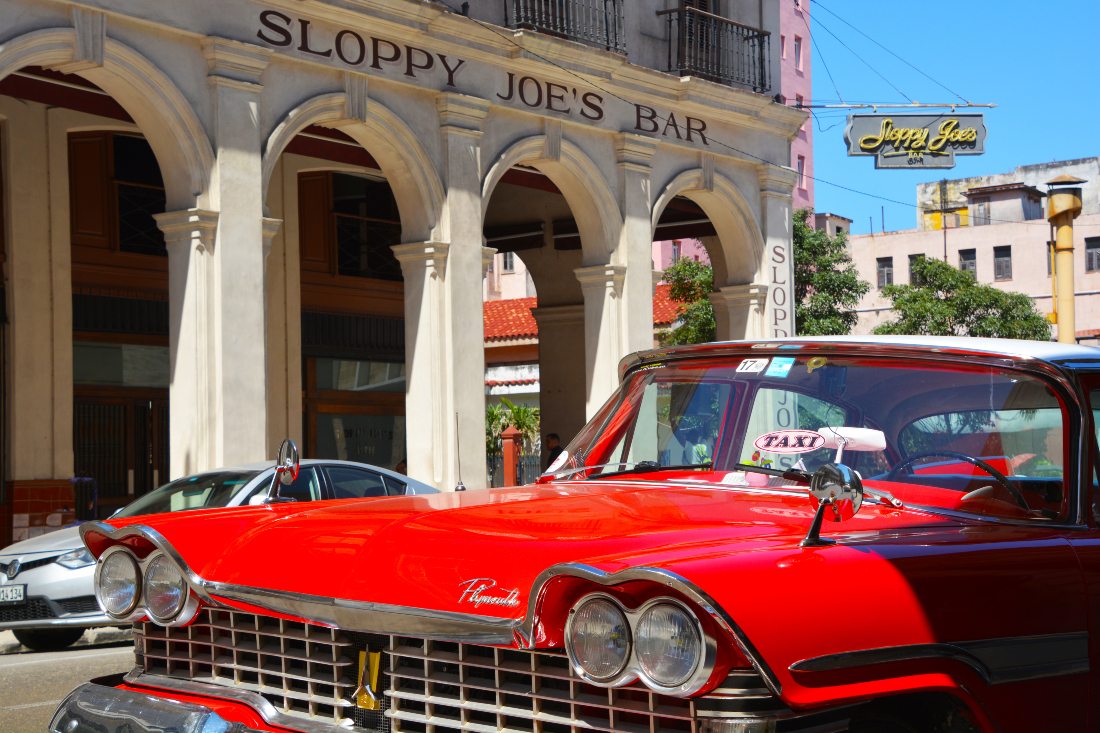 “Don’t bother with churches, government buildings, or city squares. If you want to know about a culture, spend a night in its bars,” said bon viveur and author Ernest Hemingway.

Hemingway was well-qualified to make such a pronouncement, not just because his work took him from Venice and Pamplona to Paris, Key West, and Havana, but because he spent most of his free-time rabble-rousing in the bars and hostelries of his many host cities.

If, like me, you are a fan of the man nicknamed “Papa,” his writings, and the colorful life he lived, then you will enjoy reading about some of the world’s best watering holes that were visited, or inspired, by one of America’s greatest authors. 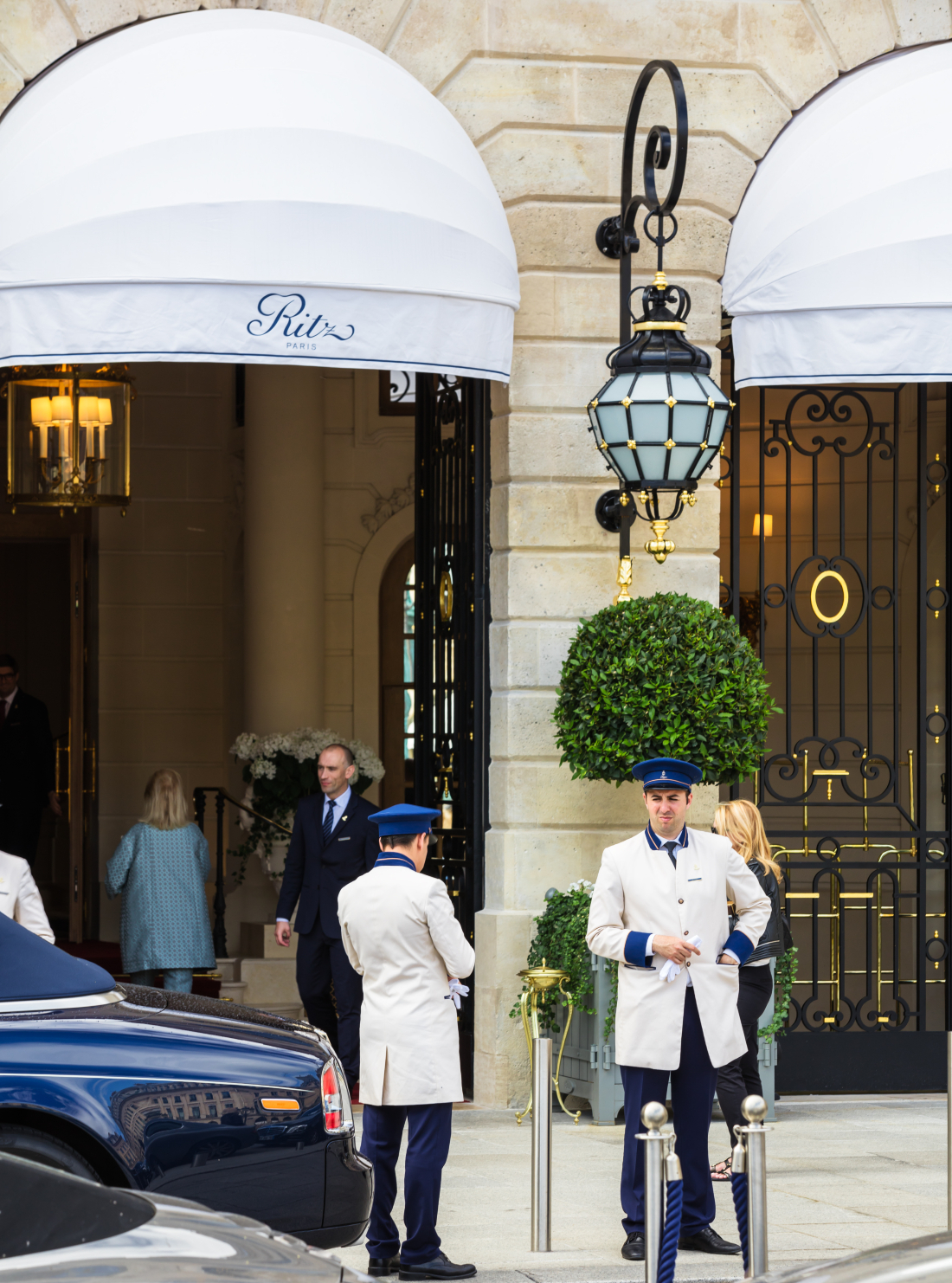 Nowhere is as synonymous with Hemingway as this corner of the Ritz, Paris. The bar is even named for him, though there is no formal sign.

There is no shortage of stories about Hemingway’s relationship with the Ritz, Paris. The most oft-repeated is the entirely fictional account of Hemingway leading the liberation of Paris in 1944 and fighting off German officers in the Ritz.

What is more likely to be true is the account from Charles Ritz, the eponymous owner, who recalls Hemingway bursting into the bar with U.S. officers and reporters and proceeding to order and consume 51 dry martinis.

Today, a trip to Hemingway’s bar at the Ritz is a must-do for visitors to the City of Light. The bar opens at 6 pm and a line starts forming an hour earlier with many of the aficionados clutching their copy of The Sun Also Rises, Hemingway’s novel that features the hotel.

After his exploits in Europe, Hemingway returned to the U.S. and declared Key West his home. Visitors to this South Florida town can visit his home, see descendants of his legendary six-toed cat, and imbibe a drink or three at Papa’s favorite dive bar.

Sloppy Joe’s formally opened in 1933, the day prohibition was repealed, and offered “a pour of whiskey” for 15 cents, though it is suspected it had been a speakeasy for many years prior. Hemingway was at his most prolific during his 12 years in Key West. Not only did he pen more than half his manuscripts, books, and short stories there, but he was a prodigious consumer of booze too.

The relationship between this Duval Street bar and the iconic writer runs deep. It is thought to be the inspiration for Freddy’s in Hemingway’s masterpiece To Have and Have Not, and he is celebrated with an annual “Ernest Hemingway Look-Alike” competition, when gaggles of safari shirt-wearing, white-haired hirsute men saddle up at its bar to start drinking at first light.

As with nearly everything to do with Hemingway, fact, and fiction freely merge. While bars in Key West wrangle over which is the original Sloppy Joe’s, there is an alternative school that claims the “original, original” was, in fact, down a dusty side street in Havana, Cuba.

Spanish waiter Jose Abeal y Otero opened his unnamed dive bar on the corner of Agramonte and Animas streets in 1918 and quickly became a hotspot for the huge number of Americans seeking to escape prohibition and indulge in Havana’s legendary nightlife. Regulars, including boxer Joe Lewis and singer Frank Sinatra, were unable or unwilling to call the owner by his Spanish name and christened him Joe. Hemingway and his close friend Joe Russell were frequent visitors. It is suggested Russell “borrowed” the name for his Key West hostelry upon his return to the U.S.

Following the Cuban Revolution, Sloppy Joe’s lost its American clientele and, years later, was destroyed in a fire. But thankfully, as Cuba opened to visitors from around the world, the legendary watering hole – complete with the original mahogany bar – also threw open its doors again in 2013. Perhaps it’s not as raucous as during Papa’s days, but it’s certainly worth a visit next time you’re in Cuba. 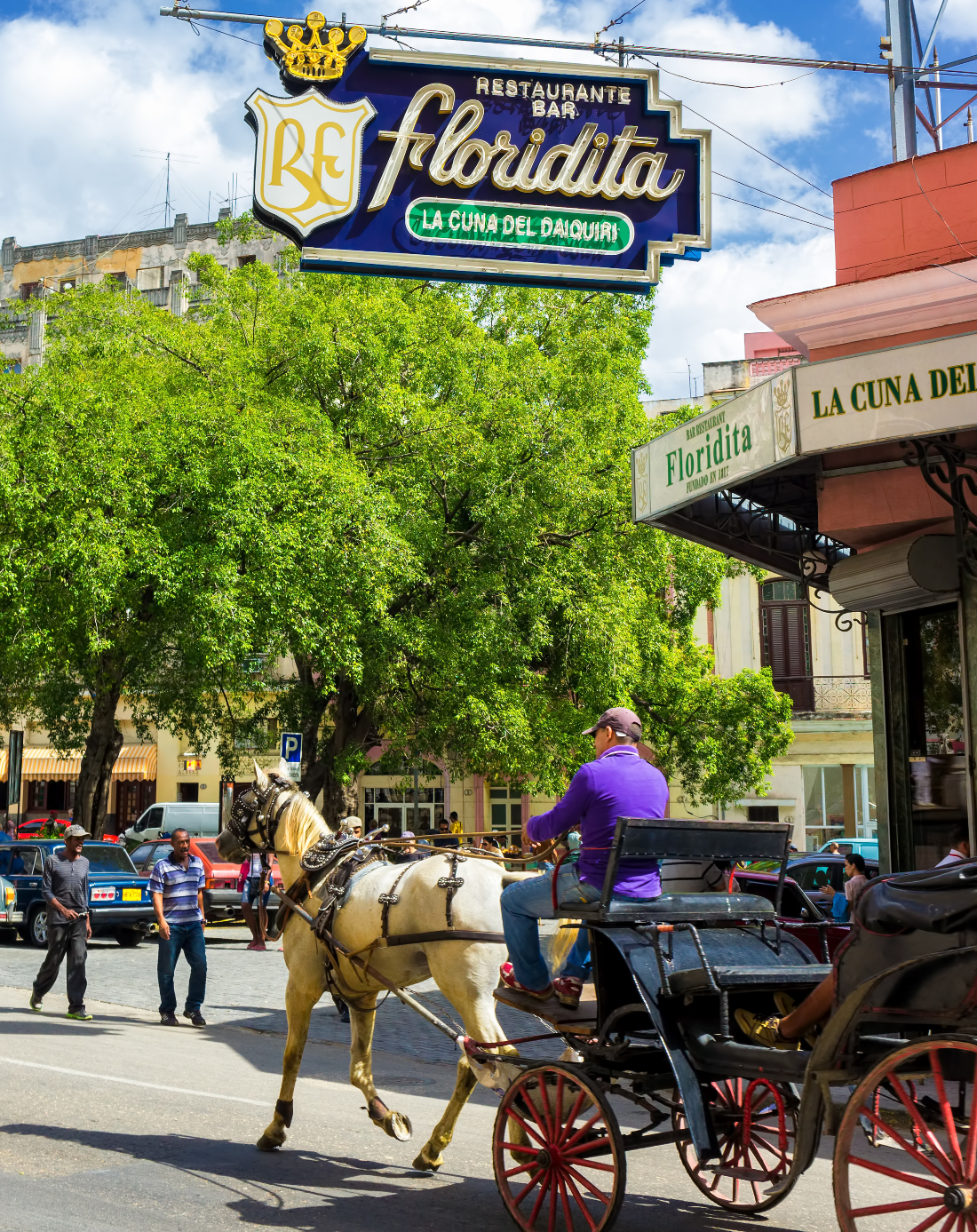 This is perhaps the quintessential warm-weather Hemingway bar and restaurant.

Not only has a bust of the author been on display since 2003, but a life-sized bronze statue of the writer also sits in the spot Hemingway occupied for decades. Originally opened as The Silver Pineapple in 1817, the bar adopted its new name at the bequest of its American clientele a hundred years later. About that time, a Catalan emigre Constantino Ribalaigua Vert became the owner, and much to Ernest Hemingway’s delight, he created the Daiquiri, still served today by El Floridita’s red-jacketed bar staff.

The rum-based, sugary, frozen drink was an instant hit, but Hemingway wanted some modifications. Legend has it, while on one of his trips to Cuba, he told Constantino, “That’s good, but I prefer it without the sugar… and with double the rum.”

And that’s how the Papa Doble was born.

Hemingway remained loyal to El Floridita but, wisely, didn’t want to alienate himself from other bar owners in the town, especially a favorite, which made his mid-morning mojitos: “My mojito in the Bodeguita, and my daiquiri in the Floridita,” he diplomatically declared.

The original signed version of this motto still hangs behind the bar at El Floridita.

The Havana Bar at The Pearl Hotel, Rosemary Beach, Florida 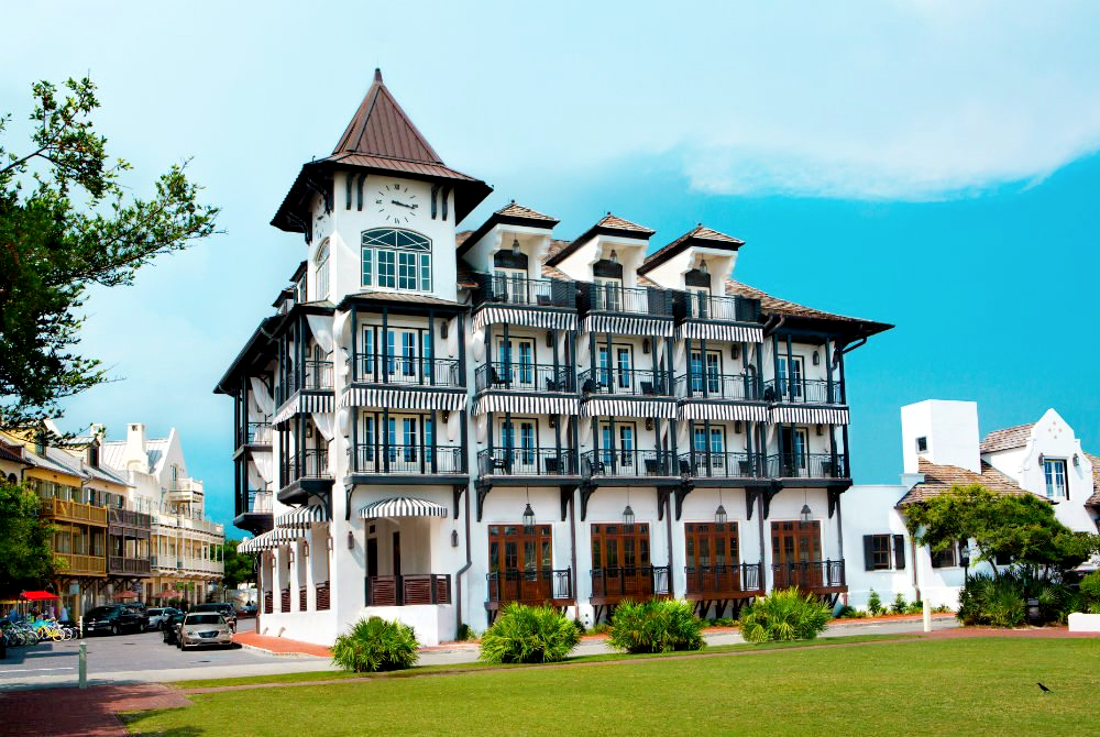 Hemingway’s prodigious thirst and reputation for marathon drinking sessions has led to many bars worldwide adopting his name. There are “Hemingway’s” in Ireland, Curasao, and Thailand, with no obvious links to the author.

But one of our favorite spots inspired by El Floridita and Hemingway’s love of a daytime tipple is right here in our own backyard on Northwest Florida’s Scenic Highway 30A – The Havana Beach Bar at The Pearl.

Raised above street level, complete with a long mahogany bar, windows open to a cooling coastal breeze, the floor-to-ceiling back bar is stocked with an extensive and eclectic range of rums and other spirits while the restaurant offers a selection of delicious dishes.

With a cold muddled drink in one hand, a fork laden with fresh seafood in the other, El Papa would have approved. Cuba Libre!

5 Fun Facts (or myths) About Hemingway 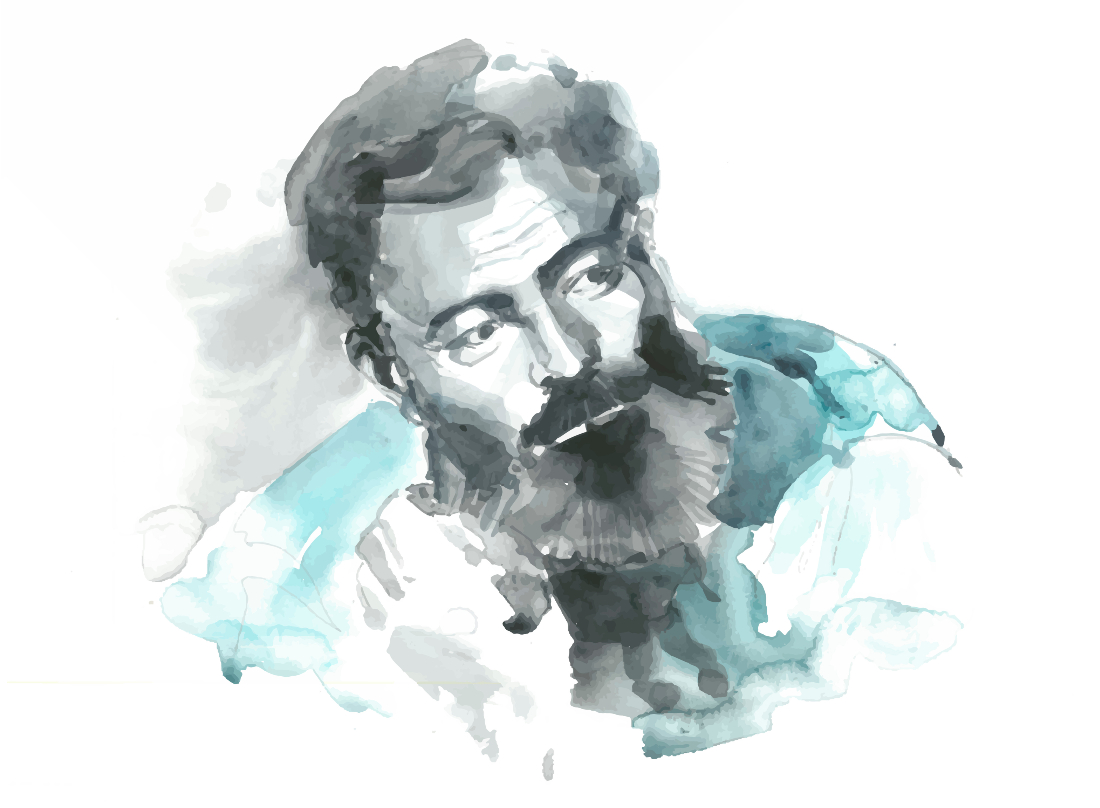 Some say he was at General LeClerc’s side; others have him cavorting with Elena, a Spanish gypsy woman in a bar outside Versailles at the time. He did later liberate the Paris Ritz of its plentiful supply of champagne, however.

2. He got drunk and slept with a bear.

Hemingway told The New Yorker he “got along well with animals.” He said that in Montana, once, he lived with a bear, and the bear slept with him, got drunk with him, and was a close friend.

3. He reassured F. Scott Fitzgerald about his manhood.

Fitzgerald told Hemingway he was being ridiculed by his wife. During a visit to the restroom at the Ritz, Hemingway peered down and reassured his fellow author, advising him “to visit the Louvre and study the statues.”

The Guardian revealed documents in 2009 that claimed Hemingway was recruited by the Stalin-era KGB to be an agent under the code name Argo, but that he produced no valuable information.

5. He rewrote the ending of A Farewell to Arms 39 times.

Journalist George Plimton asked Hemingway about his editing style. He replied he had written the ending 39 times before he was happy. Plimton asked what the problem had been, to which Hemingway replied, “Getting the words right.”