New 30A Hard Seltzers Inspired by Local Beach Life - 30A 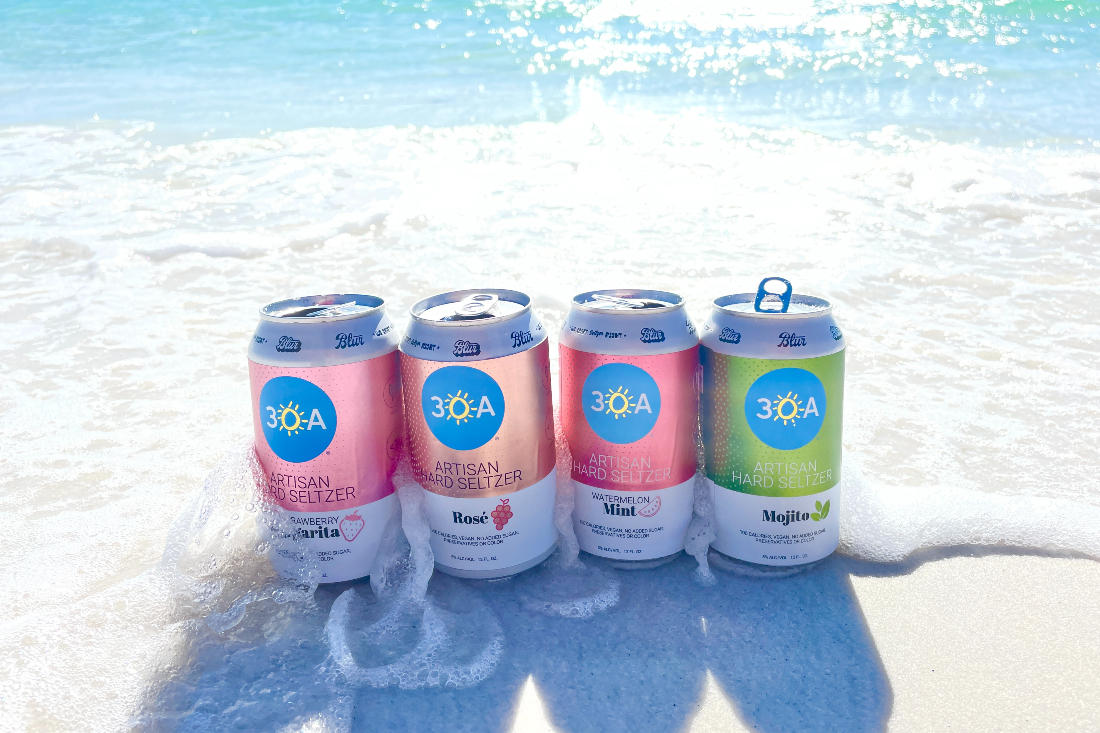 Coolers got some colorful new swag this spring. The 30A Company partnered with Vincent Davis of Beauty Hatchery and Tupps Brewery in Texas to craft a line of beach-inspired hard seltzers. Launched in January at the 30A Songwriters Festival, the refreshing flavors quenched attendees’ dance-fueled thirst with crisp variations of Mojito, Strawberry Margarita, Rosé, and Watermelon Mint.

“If you love hard seltzers and you love the beach, 30A Hard Seltzers will instantly become your go-to beverage of choice,” said Mike Ragsdale, 30A’s founder and CEO.

“They’re tropical, refreshing, and they really capture the spirit of 30A.”

Hard seltzers are not new, but they saw staggering growth during the pandemic as more brands entered the market in response to consumers’ push for a healthier and more sustainably packaged beverage. According to Nielsen, the explosive pandemic growth of hard seltzer is leveling off as more people venture out of their homes, but they project “the industry’s global market to grow at a compound annual growth rate of 14.4% from 2021 to 2026.” And based on the reception Vincent Davis witnessed at the 30A Songwriters Festival, 30A Hard Seltzer is a welcome addition to the field.

“We tested two groups in Dallas: those familiar with 30A and those unfamiliar with the brand and area,” he said. “They chose the flavors. What sets them apart is that they’re very crisp, not overly sweet, vegan, and most importantly, they’re made of all-natural flavors that come in at 100 calories with 5% ABV, which is fantastic. You can drink them all day.” 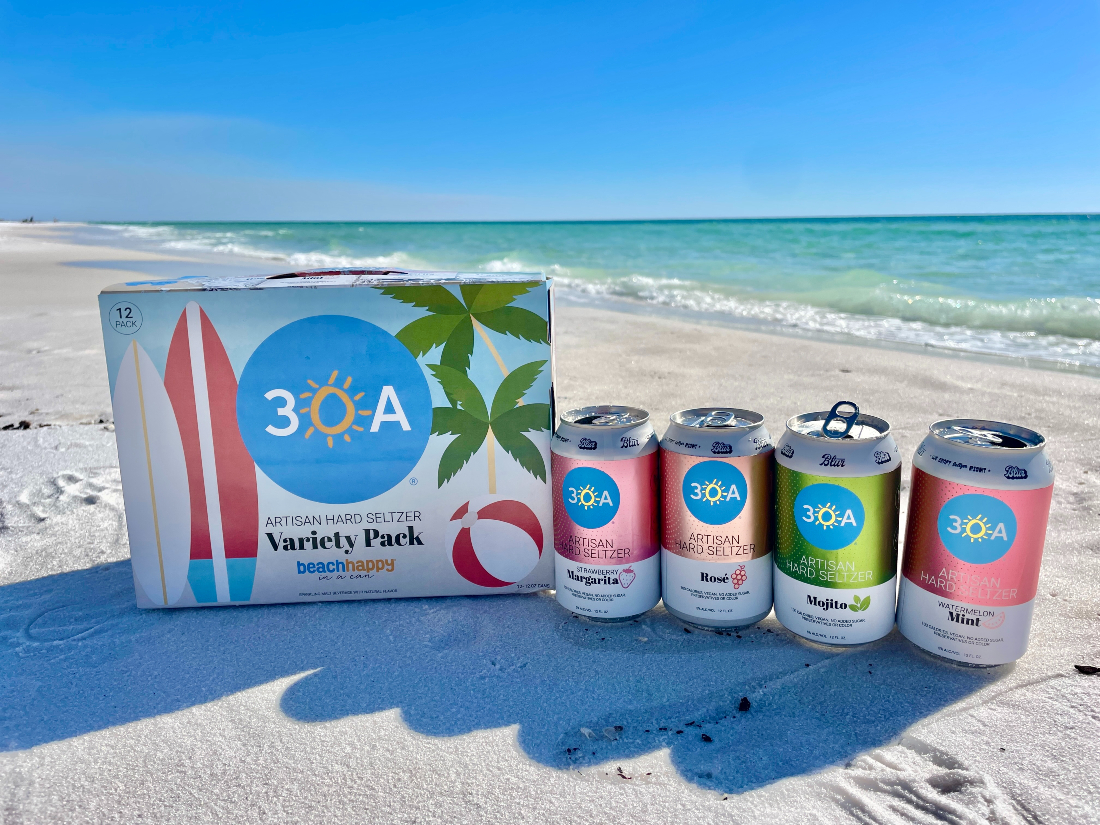 It’s not just about a new seltzer though; it’s about a product that taps into the magic of 30A. In the late 1990s, Davis started vacationing along Scenic Highway 30A during the summer while his kids were young. Nine years ago, he bought a house in Seagrove, and a 30A tire cover for his Jeep because he loved the community he found here. “It was just a great lifestyle—it’s families riding bicycles, concerts at Seaside, and almost like stepping back in time when communities got together.”

That communal spirit extends to the brewery Davis tapped to create the seltzers. He approached Tupps, a small batch, family-owned brewery in McKinney, Texas. He knew they would put a lot of personal touch on the product, from the brewery process to canning to putting them in the cartons. And, in a happy twist of fate, Tupps had aggressively stockpiled containers pre-pandemic, so production rolled on quickly while other brewers were still waiting on cans.

Many hard seltzers come in “skinny” cans, but not 30A’s. The 12-ounce hard seltzers live in a traditional beer can, and that choice goes back to those test groups. 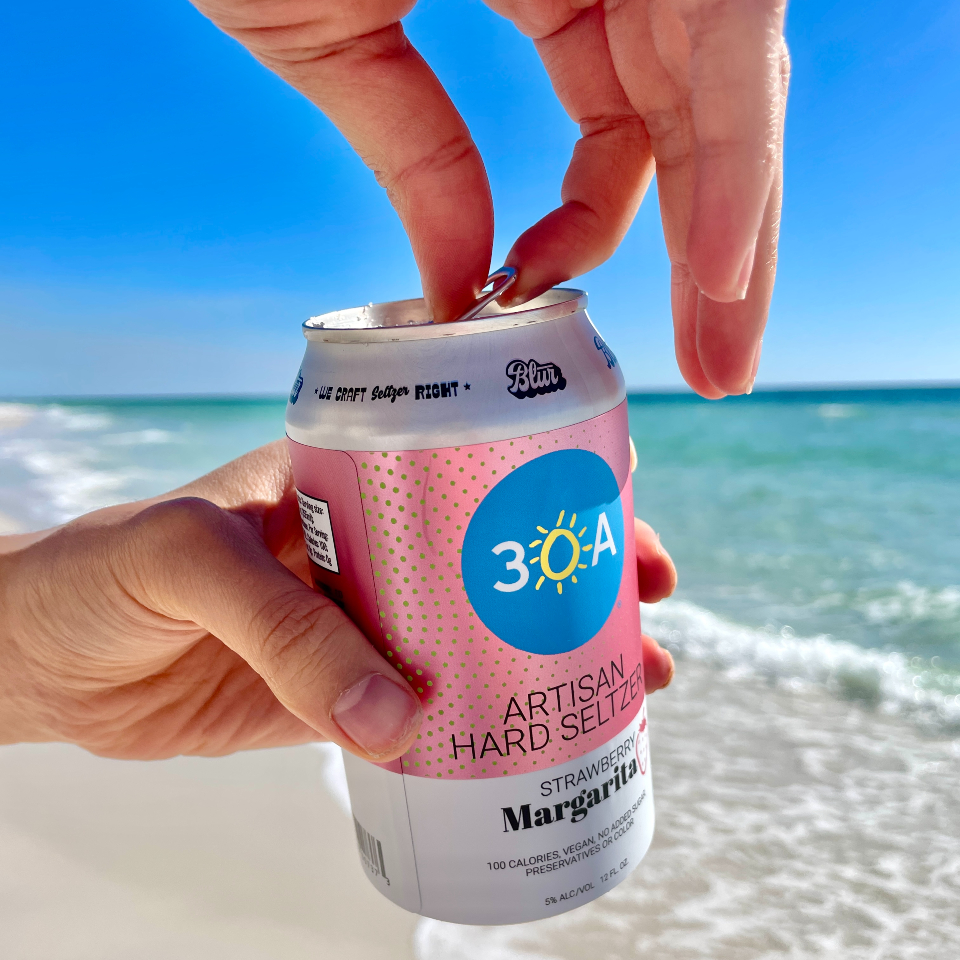 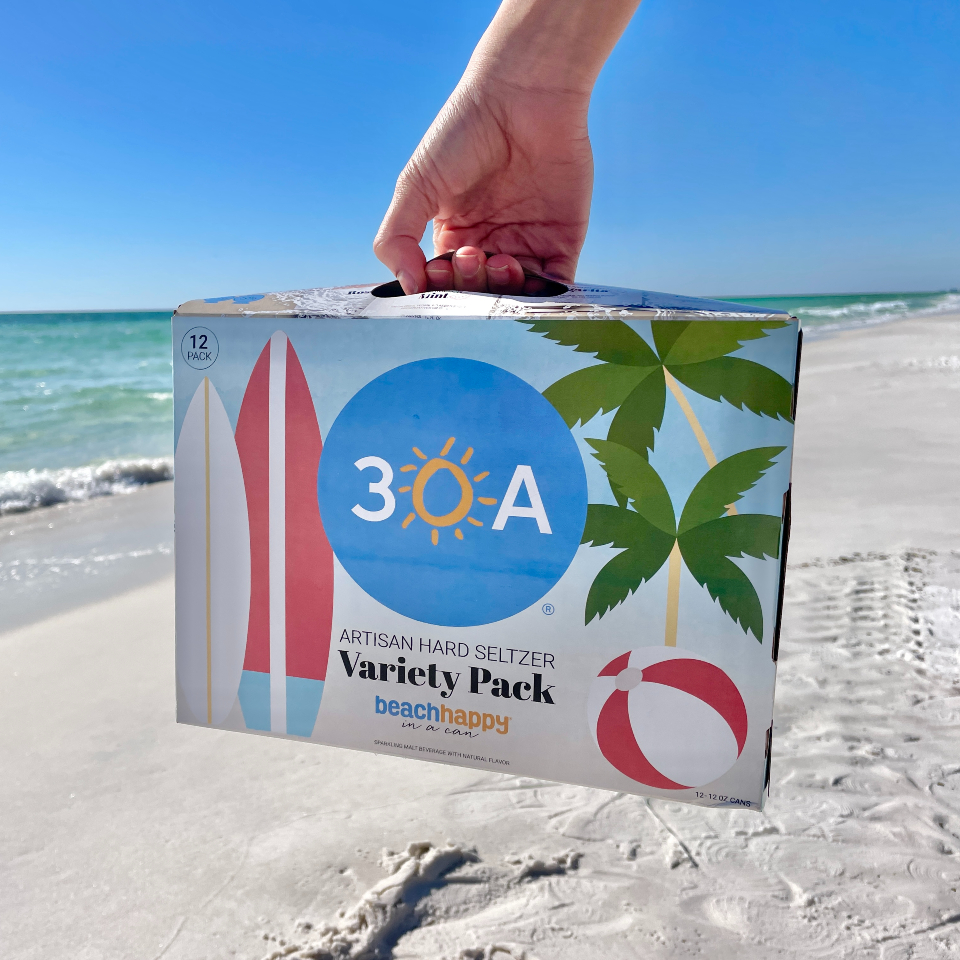 “We had a lot of discussion, and it turns out they hated the skinny cans because they don’t fit in koozies,” said Davis. “For a product taken to the beach, enjoyed in a pool, or packed in a backpack for a day of hiking, koozies are a necessity.”

“The choice of can as the package vehicle also aligns with 30A’s eco-conscious mission. They are infinitely recyclable and back on the shelf in as little as 60 days, lightweight and stackable for less carbon footprint during transport, and their portability for outdoor recreation is unmatched.”

Each recipe was honed through multiple rounds of taste-testing to get the perfect profile to match the most popular drinks spotted around “the Hamptons of the South.” Davis elaborated, “We wanted to focus on drinks we see at Great Southern, Bud & Alley’s, and all over 30A at happy hour. People come off the beach and grab a mojito or margarita, or they wander the farmers market drinking rosé, and we wanted to produce those beach-centric flavors.”

Already available at restaurants and markets in Northwest Florida, the goal moving forward is to grow into grocery stores like Publix and Winn Dixie, and eventually move into markets like Georgia and Tennessee. But back home in Dallas, Davis knows the pressure to distribute widely is coming. “Driving down the tollway or 75, or 635, or anywhere in the general Dallas area, it’s full of blue stickers and license plates. People love 30A.” 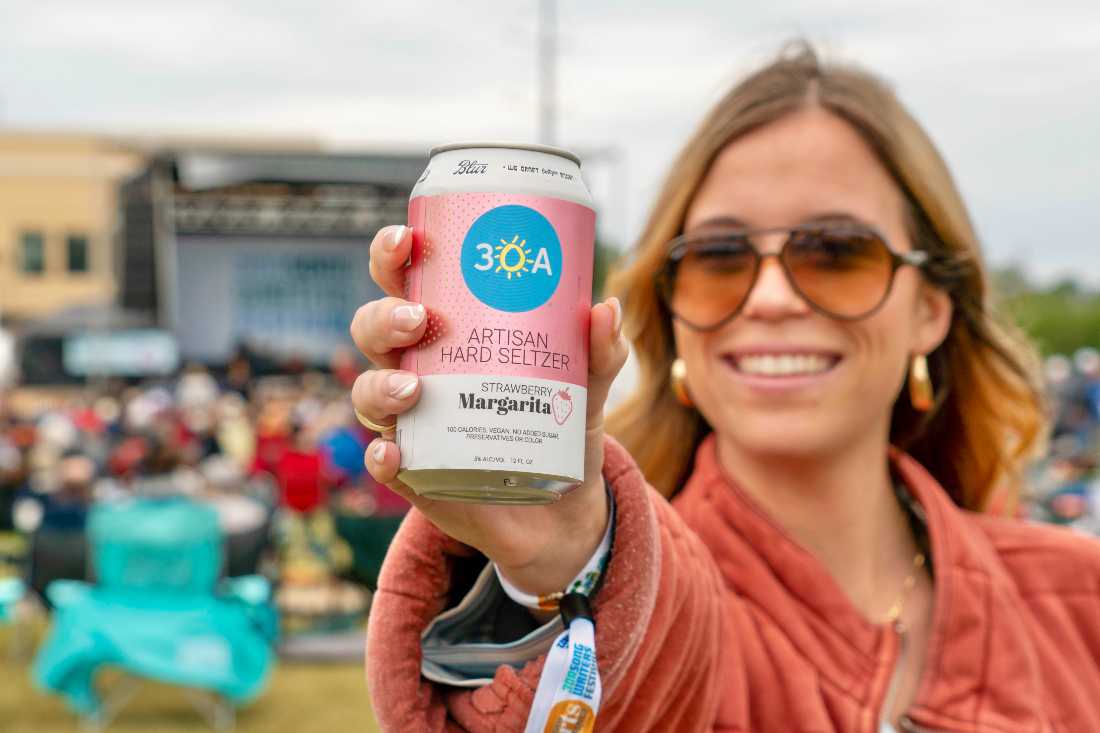 Ask for 30A Hard Seltzers in your favorite markets and restaurants, and check out 30Aseltzers.com.