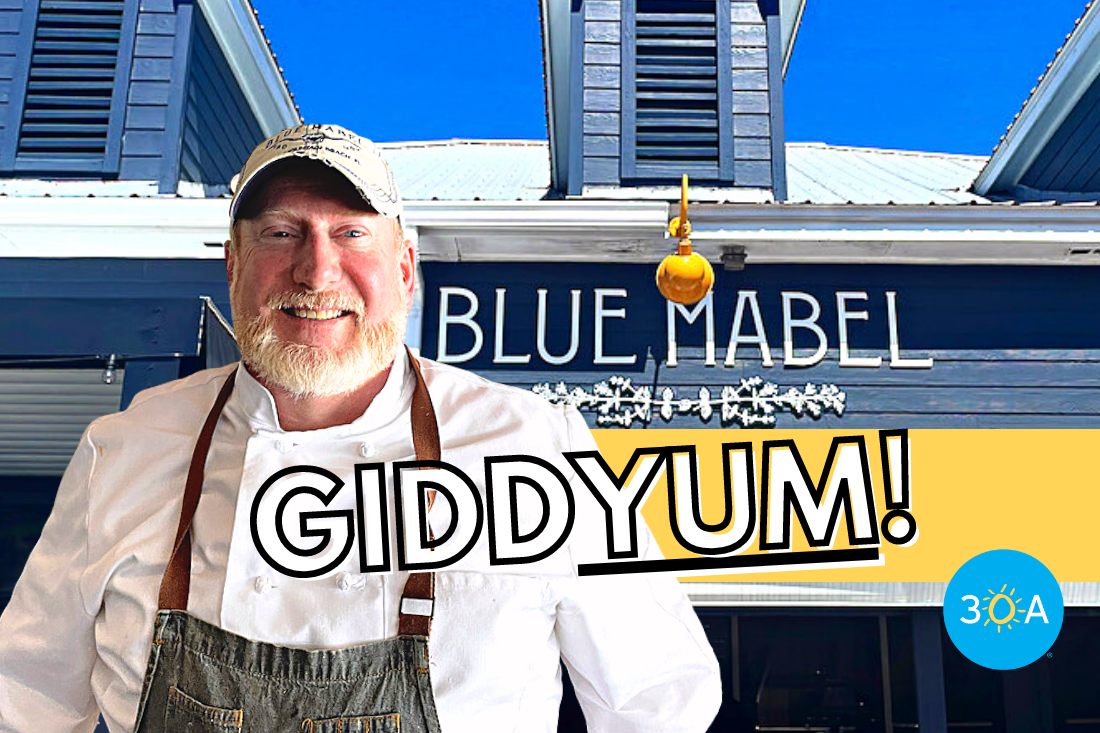 18 seconds. That’s how fast diminutive, 5-foot-nothing, Mabel Strickland could rope a 345-pound steer. Over her 25-year career as a professional cowgirl, she nabbed championships in relay races, trick riding, and steer roping. Her most daring tricks involved passing under the belly of a galloping mare, and jumping her Arabian horse, Butler, over an automobile. She segued into stunt work in Hollywood and founded the Association of Film Equestriennes before retiring in 1941.

She inspired a generation of brash cowgirls, including Nikki Nickerson, owner of Cowgirl Kitchen, and Blue Mabel, named in honor of Strickland and the beautiful blue lupines growing wild all over Blue Mountain Beach.

“I wanted to be distinct from Cowgirl because I knew it was going to be a completely different experience.”

“I also wanted to convey the whimsical fun you have with my brands—you know you’re going to have a great time and eat great food without it being stuffy.”

“I heard about this rockstar cowgirl from the early 1900s, Mabel Strickland, and she resonated with me. She was a strong, strong woman who was a cowgirl all the way into her 80s. She was quite the character, and I just loved it. Her sense of spirit, her life, her adventurous nature all spoke to me, and Blue Mabel was born,” Nickerson said. 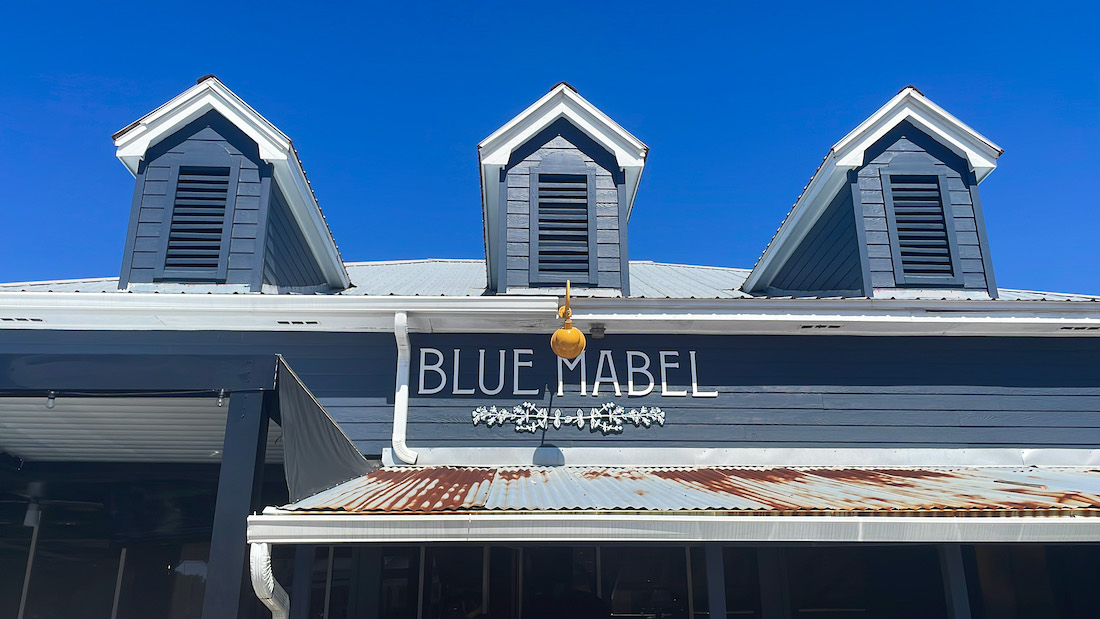 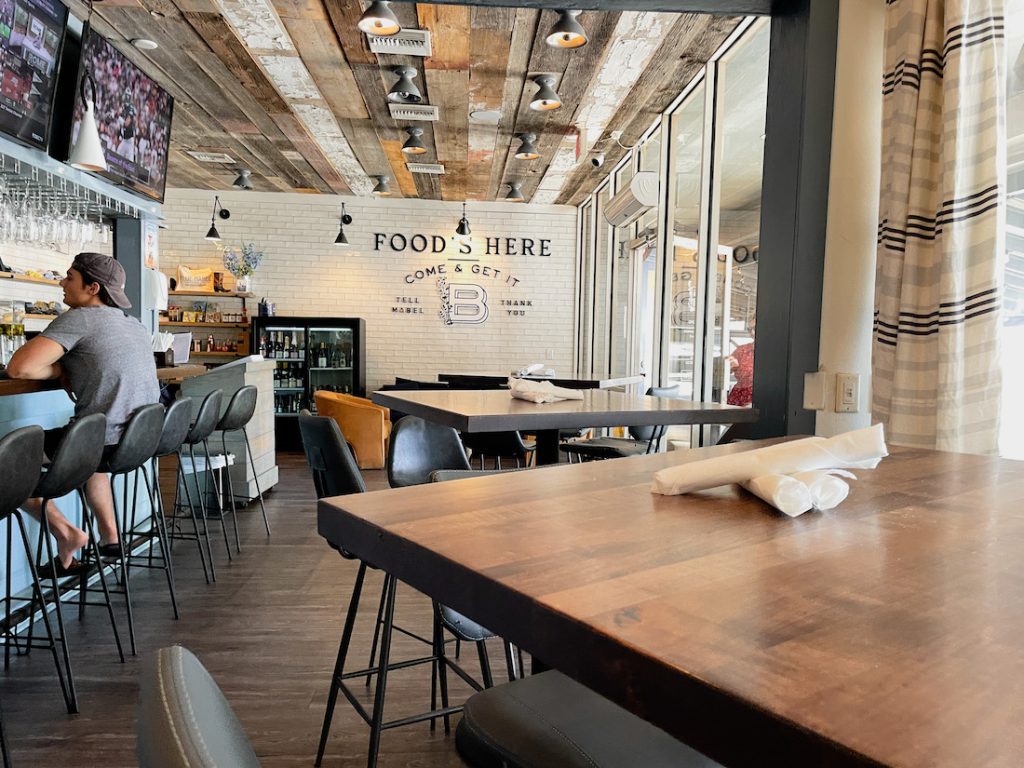 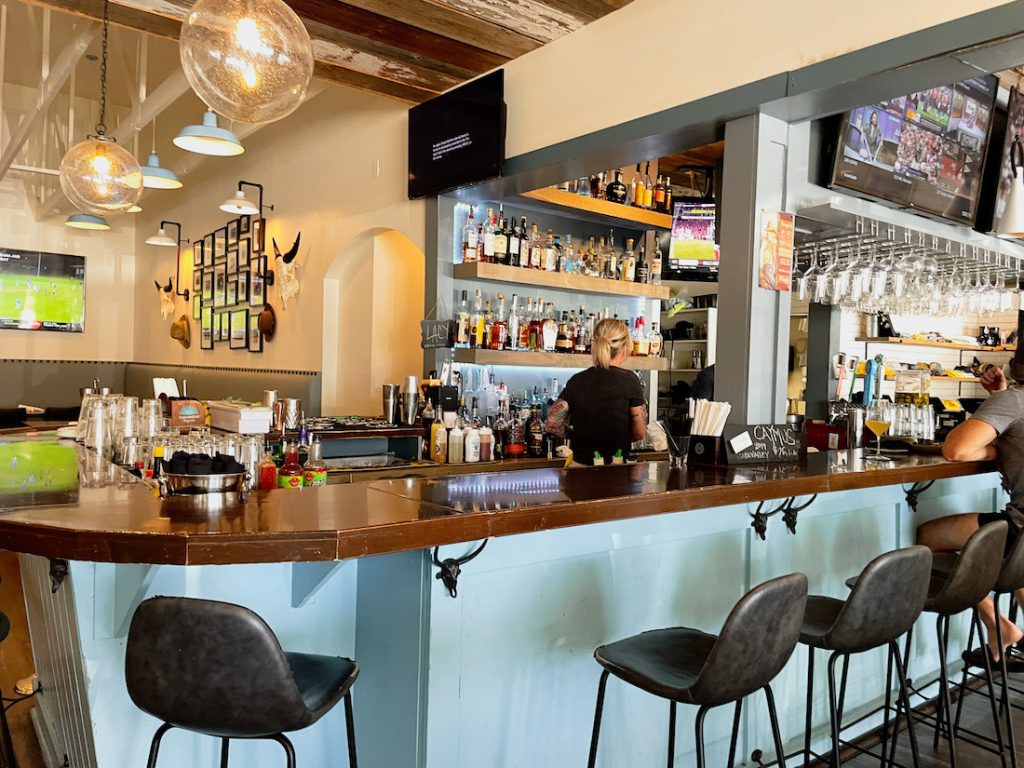 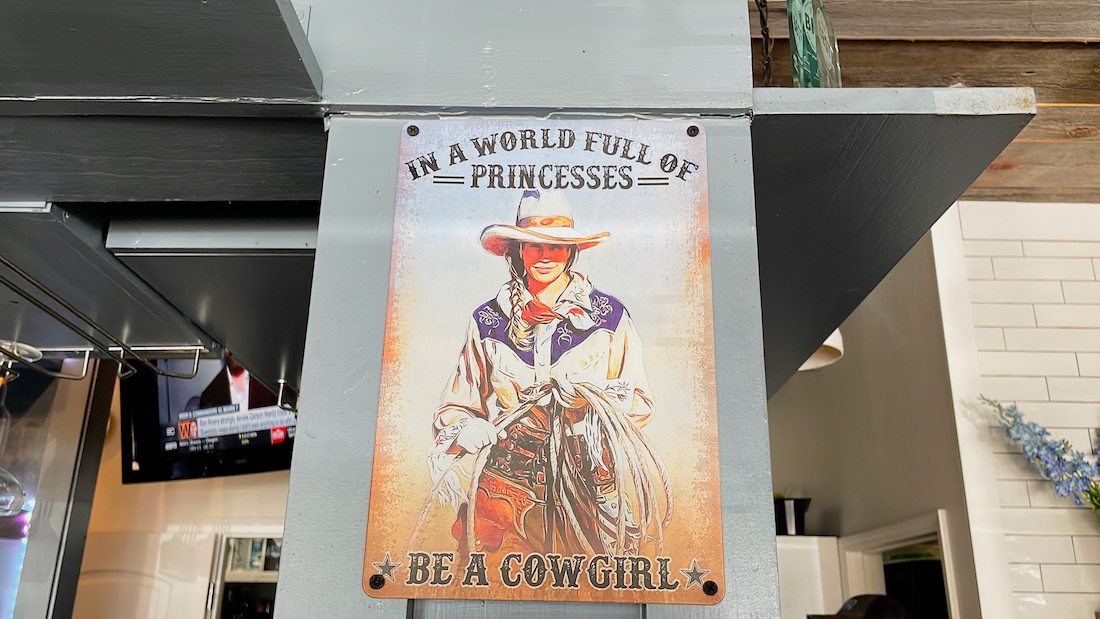 The first thing you see when entering the restaurant is a small sign hung by the host stand that reads, “In a world full of princesses, be a cowgirl.” That sign starts the wild west experience diners get at Blue Mabel.

From the wood accents to the display of western hats to the largescale steer photos on canvas gracing the walls, the feeling of big sky country permeates. The powder blue light fixtures and blue bar call to the flowering wild blue lupines outside, while the creamy floor-to-ceiling drapes and soft leather banquettes convey understated elegance.

The juxtaposition of refined and wild continues with touches like the matte black purse hooks under the bar carved in the shape of steers, and the impossibly soft, crushed blue velvet couch in the waiting area. But it is the menu that really brings the concept home.

Fate stepped in when Nickerson acquired the space for Blue Mabel. She never intended to open another restaurant, but a spot she had long admired was available, and so was one of her favorite chefs. Industry veteran David Cunningham, a classically-trained chef who cut his teeth at Commander’s Palace in New Orleans, fit Nickerson’s vision for the coming west-end restaurant. 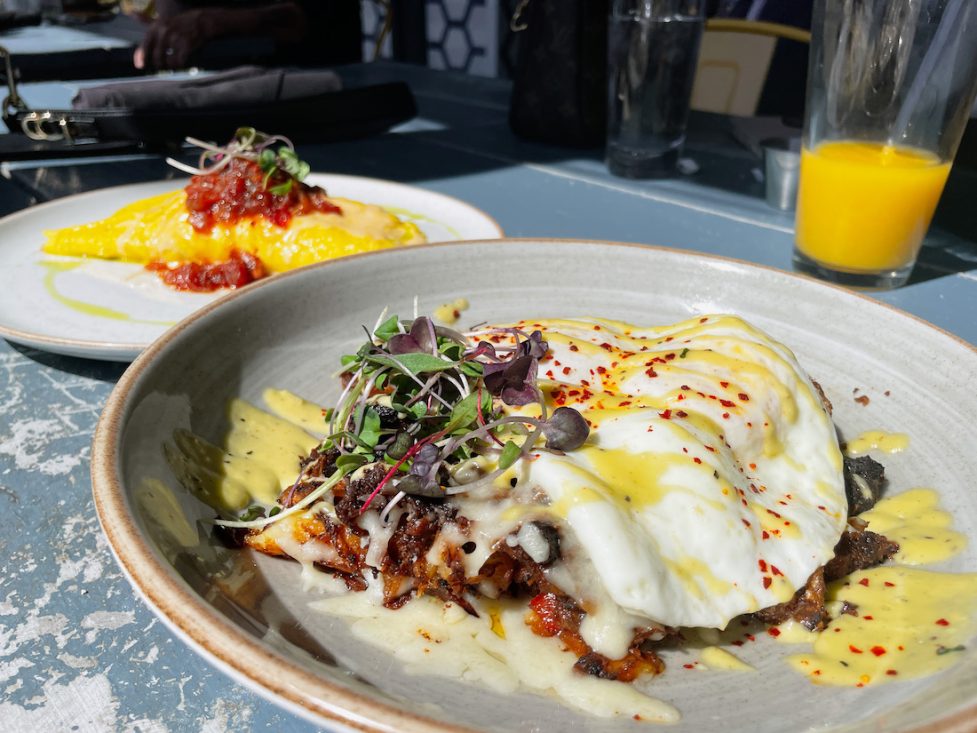 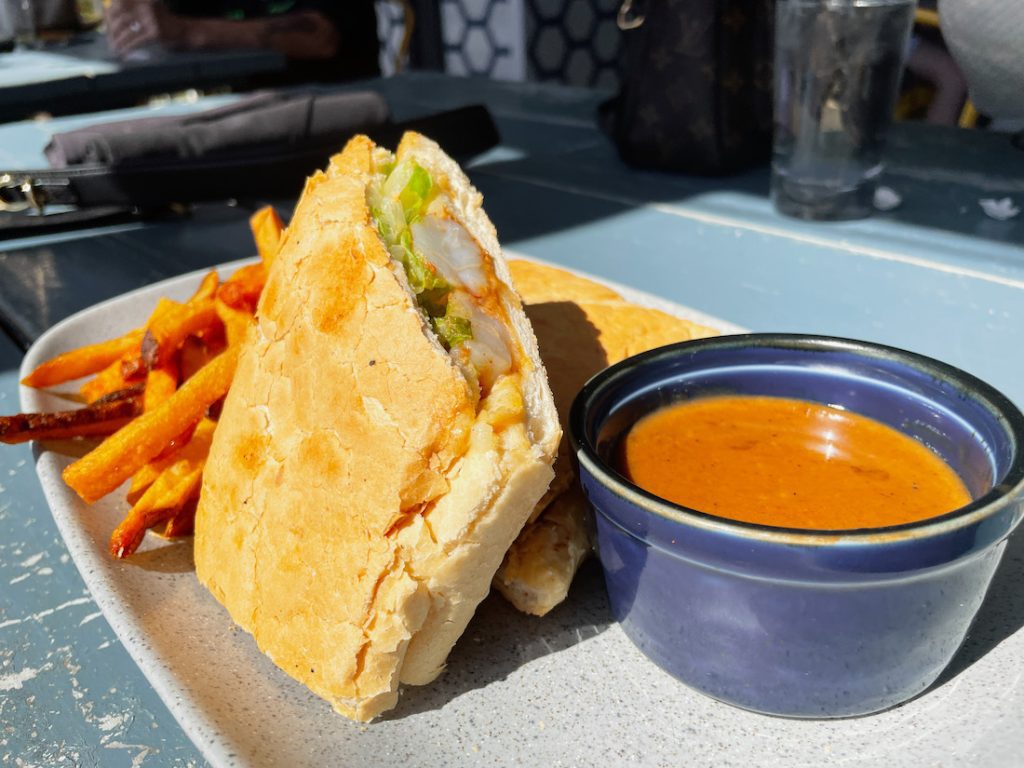 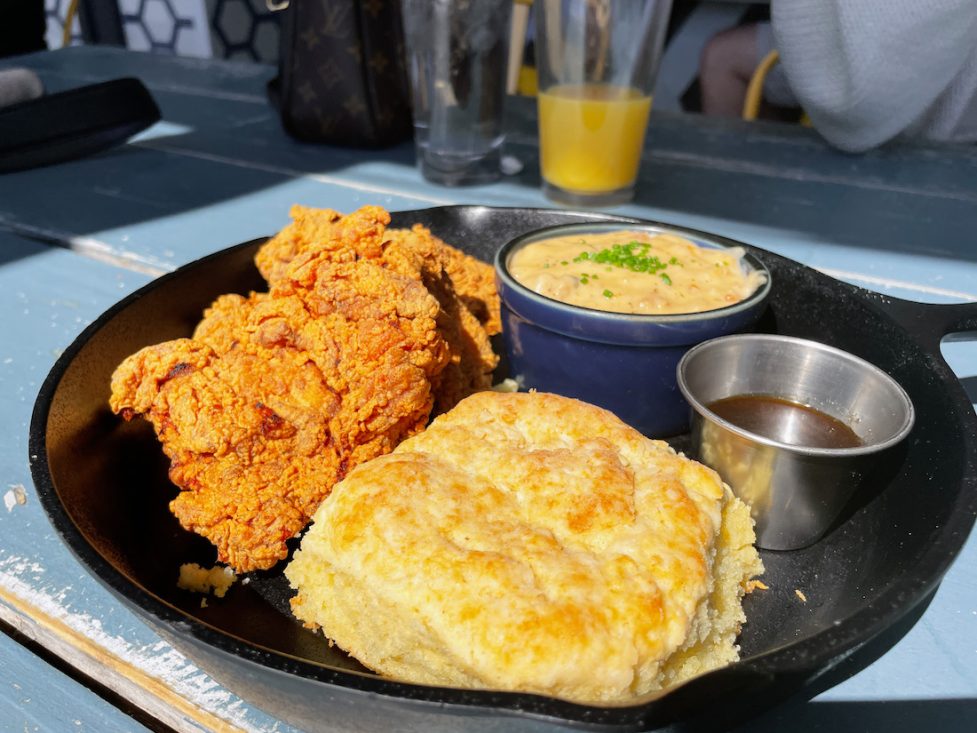 “David helms Blue Mabel as the operating partner and chef. He does an amazing job of locally sourcing provisions for the restaurant. He’s very particular about his sourcing from greens from Point Washington to honey from a nearby [apiary] to gulf coast oysters. I think he’s one of the most talented chefs in the southeast,” Nickerson said.

I found that praise spot-on after a recent Sunday brunch visit. Biscuits as big as your head with visible layers and a soft, moist inside made the perfect companion to the gravy laden with hunks of sausage, tempered with just the right amount of pepper. The pepperjack grits, redolent with cheese, had that creamy texture with the cracked corn bite I always hunger for. And those just started the journey.

Cunningham’s commitment to local sourcing and scratch-made dishes shines in the lemon ricotta pancakes served with cane sugar compound butter and blueberry agave syrup made in-house. And the brisket hash…well, you can smell it being smoked when you pull up in the parking lot. The burnt ends were smoky, tender, and had just enough juice to bathe the rest of the hash. Don’t get me started on dinner…that pork belly, bourbon-braised, tender inside with lacquered bark outside, sitting atop a tangy green tomato jam, with a perfectly fried gulf oyster lidding the meat…well, it’s a must-have in my book.

When Nickerson dines at Blue Mabel she has a few favorites. For brunch though, she goes for the omelet, the ultimate test of a chef’s mettle. “It’s always challenging to make an omelet and get the eggs just right. But when you get a really nice one, it’s like heaven.” She loves the Boucherie Board when dining with friends. The homemade pickles and condiments served alongside crackers and meats lets everybody catch up before the entrees arrive. A love of entertaining is what keeps Nickerson in the restaurant business. 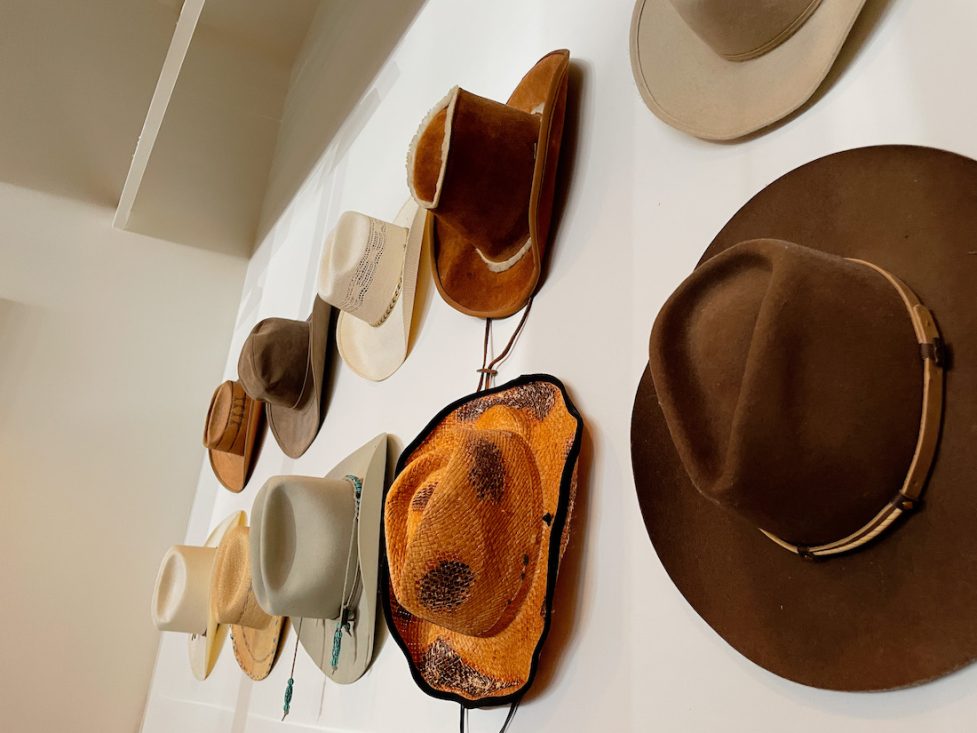 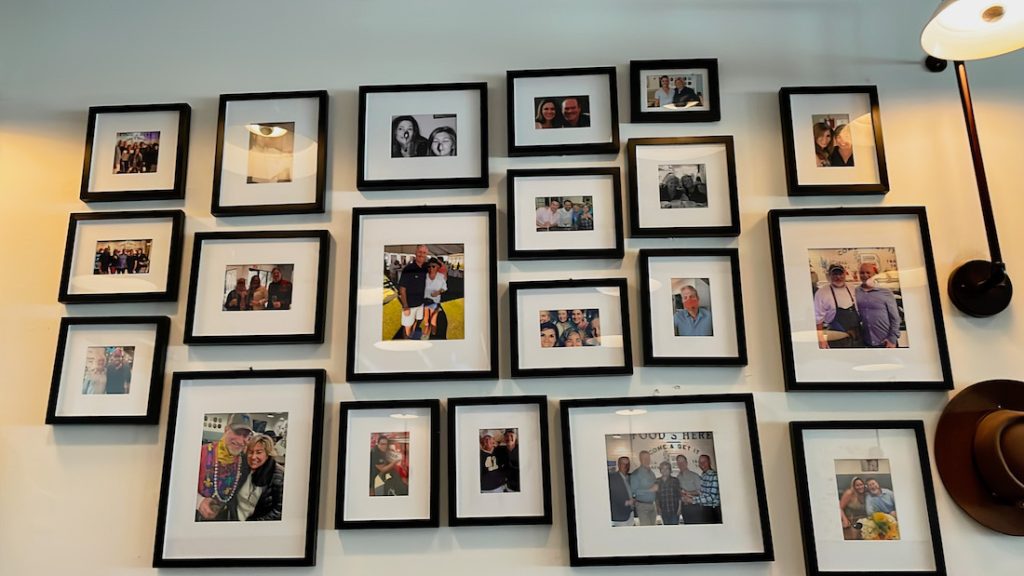 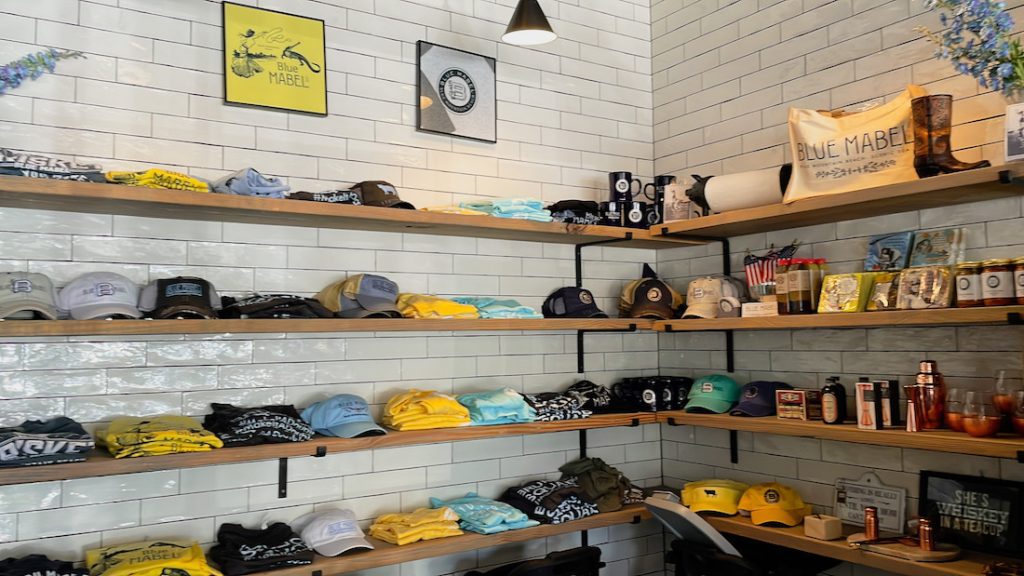 The pandemic offered Nickerson and the whole Blue Mabel family, an opportunity to entertain in a different way.

A pivot to takeout and community outreach feeding people allowed them to really get to know the people that live in Blue Mountain Beach in a very intimate way, over a meal.

“I love bringing people together. Blue Mabel is about gathering, breaking bread, sharing wine, and being able to spend time with people,” Nickerson said.

And maybe Blue Mabel is a little about celebrating adventurous spirits, honoring the local growers and producers, and embracing your inner cowgirl.