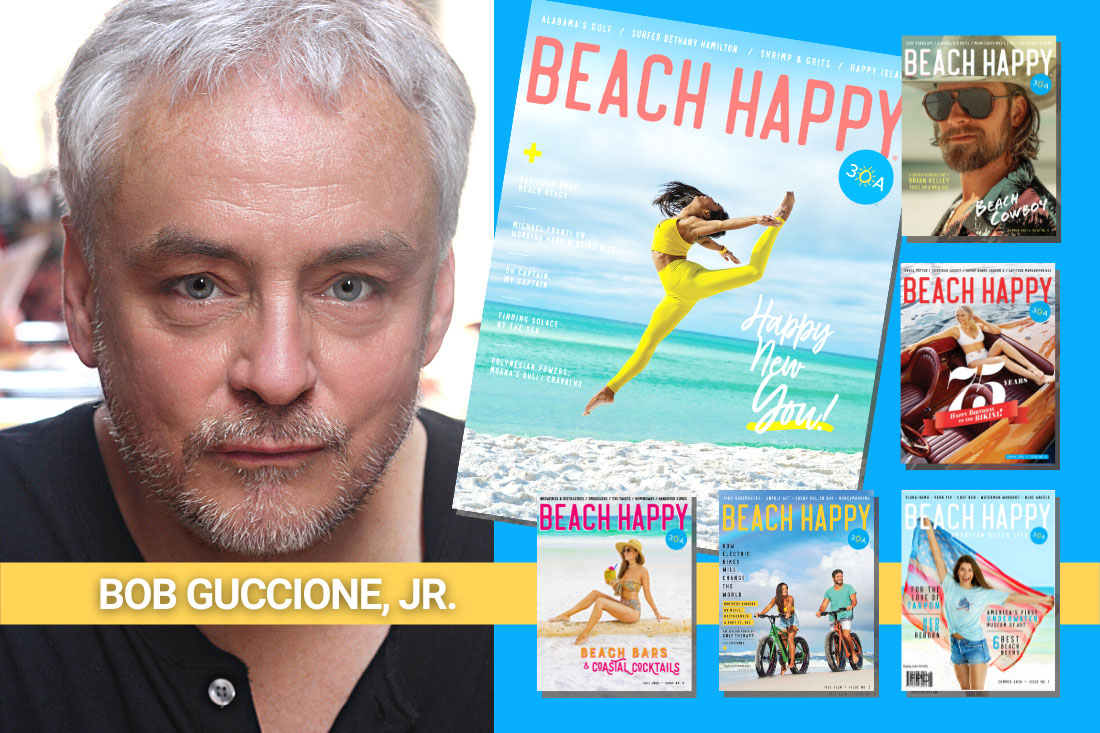 Bob Guccione Jr., who founded SPIN – the enormously successful magazine that usurped Rolling Stone as the dominant music and pop culture publication – as well as other high-profile magazines, is partnering with 30A, the Florida-based publisher of Beach Happy magazine.

“I think we all need more happiness in our lives, especially right now,” said Guccione. “The world is too divided and extraordinarily anxious. We could all use a bit more of the serenity and fun that beach life inspires.”

Beach Happy® magazine is a coastal lifestyle publication founded during the pandemic in Santa Rosa Beach, Florida by The 30A Company. 30A® has 1.5 million social media followers, making it one of the largest communities of beach lovers in the world. While 30A’s current Beach Happy magazine largely covers beach life along Florida’s Gulf Coast, Guccione will lead the expansion of the brand into other coastal regions, including a new Northeast Edition, which will launch in June 2022 and will cover beach culture from New York to Maine, with more editions to follow.

“We will ultimately launch up to a half dozen new editions in America, and simultaneously look for opportunities around the world, especially in the Caribbean, Europe and Asia,” said Guccione.

“Beach Happy presents a global opportunity,” said Mike Ragsdale, 30A’s Founder and CEO. “Bob is a legend in the publishing industry, and he knows how to build brands with international reach and appeal.”

Guccione sold SPIN magazine in 1997. Guccione’s other prior publications, including GEAR and science magazine DISCOVER, won numerous awards and accolades for editorial features, including SPIN’s famous exposés of Live Aid’s tragic missteps in Ethiopia, the Atlanta child murders cover-up, and embedding a reporter inside the IRA, as well as a controversial but internationally lauded monthly column devoted to AIDS.

Now, Guccione has set his sights on a new editorial mission: bringing more happiness into the world.

“Beach Happy is for everyone who loves the beach,” said Guccione. “It’s a celebration of beach culture, from coastal cuisine to beach bars, from tropical music to lesser-known destinations. It’s also, very meaningfully, about the people and organizations worldwide who are working so hard to protect our coastal habitats.”

Beach Happy magazine is currently available on over 1,000 newsstands nationwide, including every Books-A-Million and Barnes & Noble in the U.S., as well as major grocery chains such as Publix, Kroger, HEB, Ingles, Harris Teeter, and more. Every issue features colorful personalities, coastal cuisine, lesser-known destinations, beach homes, eco-adventures, and articles about protecting our oceans and our precious coastal habitats. To subscribe to the print edition or to view the free digital edition, visit www.beachhappymag.com.

The 30A brand is inspired by small-town life along Florida’s Gulf Coast. 30A has 1.5 million social media followers, making it one of the largest communities of beach lovers in the world. 30A has raised $3 million for coastal charities, and has given away over 3 million of its world-famous blue 30A stickers, generating $400,000 for Alaqua Animal Refuge in Walton County, Florida. Available in 400 stores nationwide, 30A apparel is made from recycled plastic water bottles, preventing over 6 million plastic bottles from going into our landfills and oceans so far. To learn more, visit www.30A.com.