Artist and Musician Chris Coleman Finds Solace by the Sea – 30A 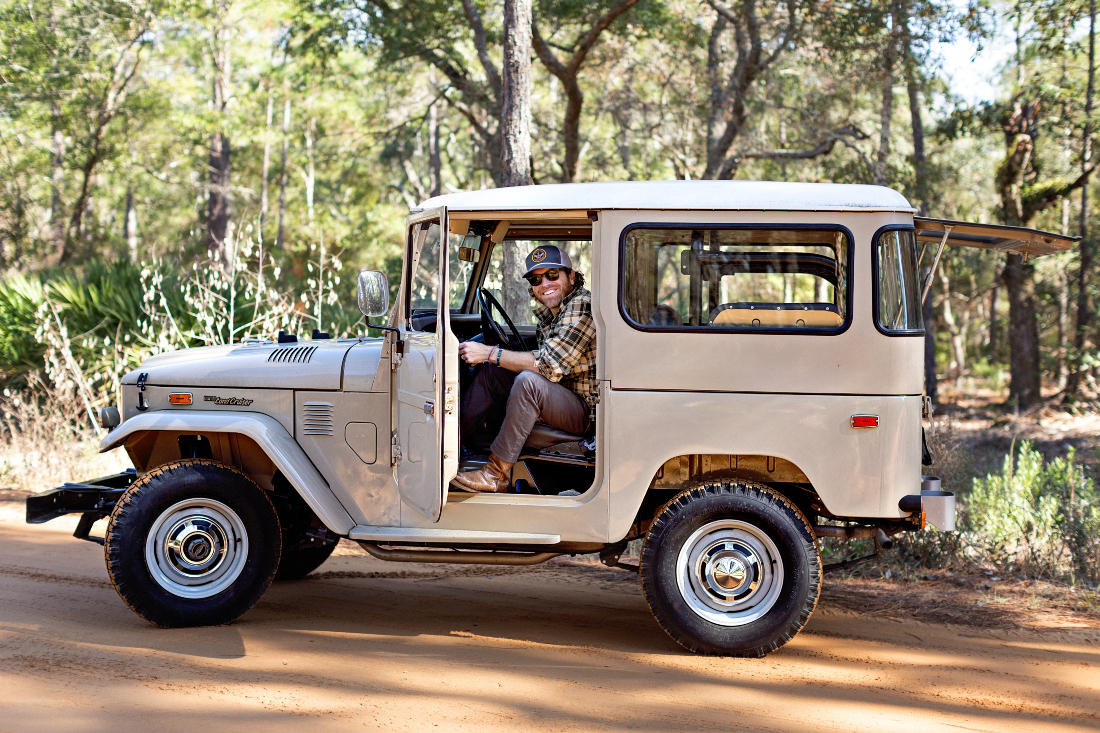 It’s safe to say everyone has had a rough year. Lost in the elongated mire of 2020, each of us has learned to navigate a world quickly changed. Some entered this alternate universe already existing in a personal or professional transition, navigating the ever-changing path of life, which can sometimes leave one feeling lost. But it’s important, especially now, to remember there’s always hope. If we just open our eyes, we realize that moving forward with optimism is always possible. I was particularly reminded of this when I sat down to speak with musician and painter Chris Coleman.

Walking into Coleman’s home, I was welcomed with true southern hospitality… the offer of a cold beer. We quickly established a rapport through the discovery of our mutual love of the Georgia Bulldogs. I listened as Coleman began to talk unsolicited about his day. The sound of progressive acoustic music played in the background as I followed Chris to a seating area nestled among musical instruments and kids’ toys. There were tubes of acrylic paints lying randomly near loose pieces of fine art paper, some still blank, but most bearing the signature images for which Coleman has become known. Spying at one wall I noticed an informal gallery of unusual paintings, haunting images bordering the abstract; black on white figures which struck something in me immediately.

It did not take long to realize that I was in the presence of a beautiful, creative mind. 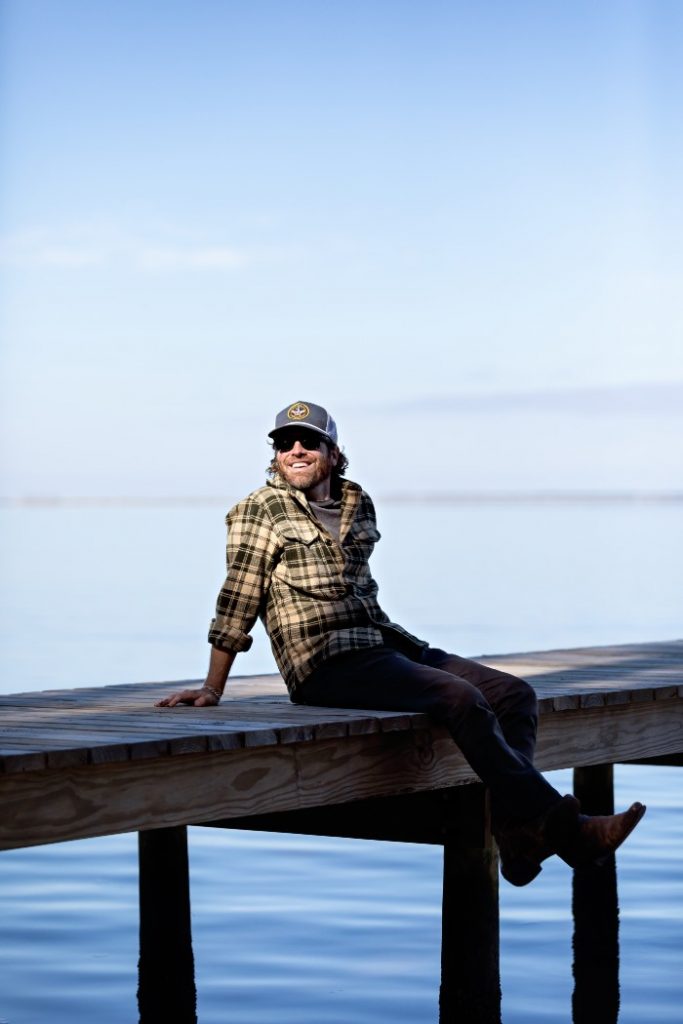 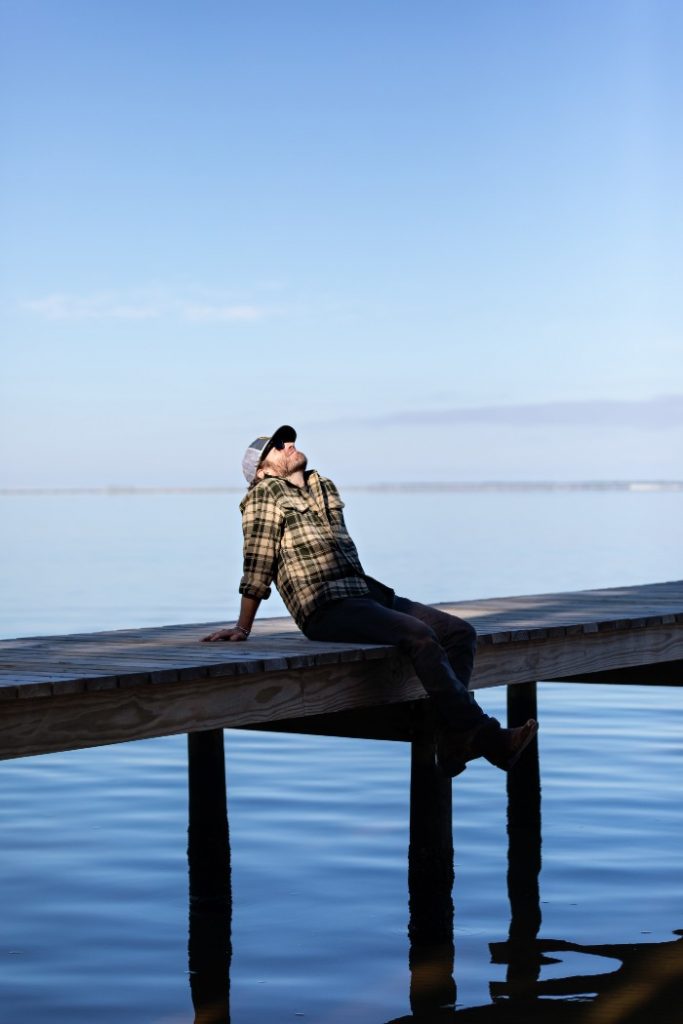 If Coleman looks familiar, it’s because he is a self-taught, multi-instrumental singer/songwriter who toured as the guitarist of the popular rock band Kings Of Leon from 2009 to 2014. He is the Georgia-born son of Gale and Phyllis Coleman. He comes from a family of larger-than-life cowboys and baseball players and shared that he was a late surprise to his parents. The youngest of three, he muses about his brother Jeremy and sister Jessica, laughing, “I showed up and they said, ‘who’s this punk?'” He admits that he prefers the mountains to the beach, “I’ve been a mountain man. If I could’ve lived anywhere before I came here, it would’ve been Montana. I love cold, I love fire and the smell of that.” Lounging comfortably now in his cowboy boots, jeans, and t-shirt, palm trees in the background, he says family vacations to the panhandle made him appreciate the Gulf Coast. Like many folks with Floridian roots, he loves to surf. He even has blood ties to the area saying his great-grandfather Percy “Boss Red” Coleman, along with his grandfather, built part of highway 98. “His ghost is running all up and down here, and that means a lot. This whole corridor is where my dad’s family grew up.”

Chris realized early in life that he wasn’t like other kids. “I was just a quiet kid in the marching band, and I fell in love with creating music.” He spent a lot of time alone fostering his growing interest in the arts. After graduating high school, he briefly attended college before leaving to play in the local Atlanta band Luna Halo and working various jobs while obtaining his pilot’s license. He had his first solo flight on the morning of September 11, 2001, and it is here, he says, his life took an unforgettable defining turn. The events of 9/11 were branded on his psyche, where they remain today. 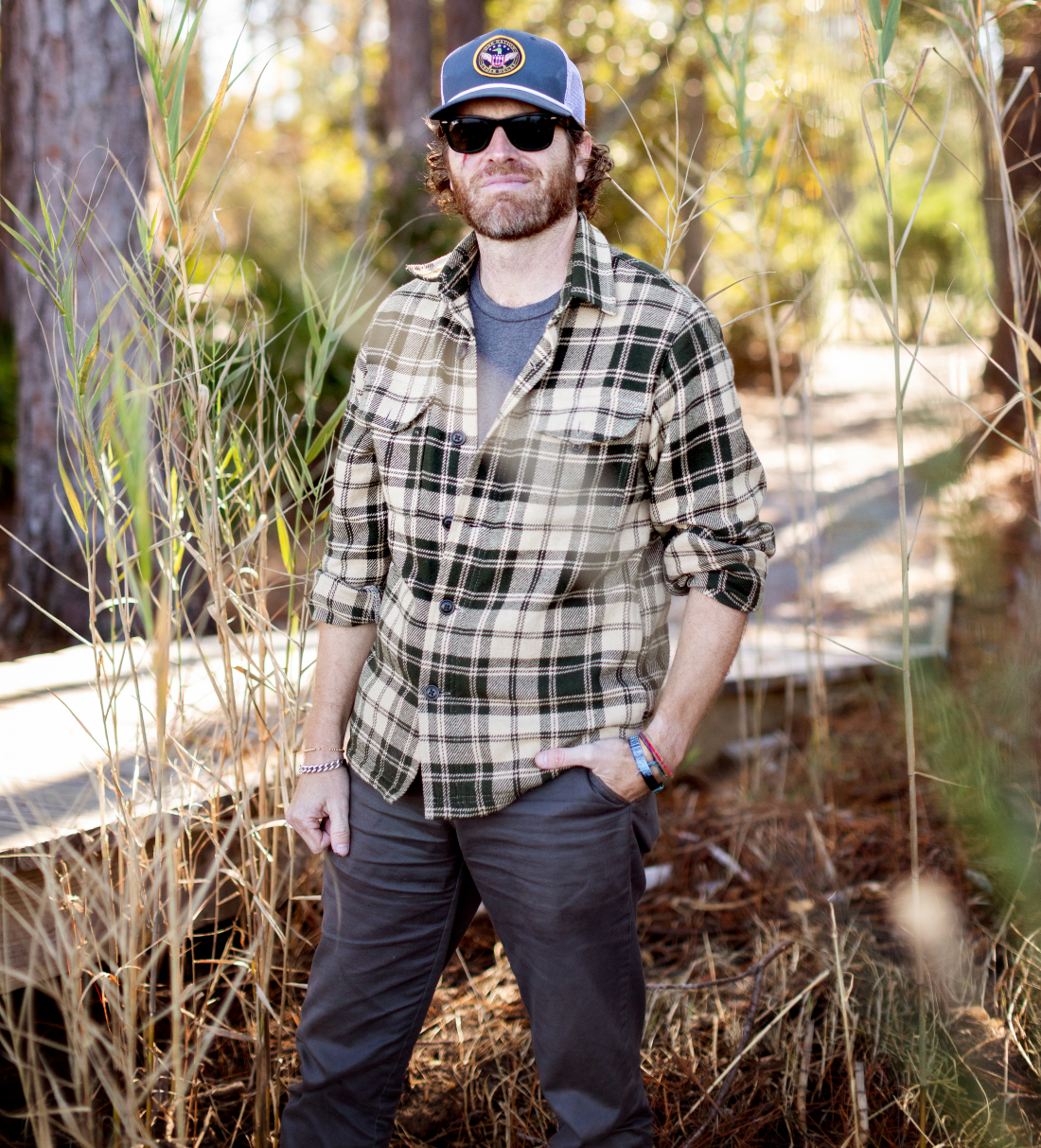 “I grew up in a hermetically sealed world, great family, seemingly normal life, but it shattered my view of what the world really was. I went on a downward spiral, and it was a deconstruction of what I thought reality to be. I learned there was real evil in the world.”

It was shortly after that when Coleman left the security of home and moved to Nashville. Through what he remembers as his angry years, he spent time writing music, playing and auditioning for bands. In 2001, he met Holly Williams, a young singer/songwriter and the daughter of iconic country music royalty, Hank Williams Jr. After years of friendship and touring together, they fell in love and married in 2009.

Chris told me something his father told him, “Son, just keep working, if you work hard, something good is going to happen.” For the next five years, Chris toured the world with the immensely popular rock band, Kings Of Leon. While Coleman still considers his bandmates among his closest friends, he says, “I was out in front of 80,000 people some nights, hungover, jet-lagged, depressed and miserable. It wasn’t the Kings’ fault, it wasn’t rock and roll’s fault, it was my fault for having expectations of something I was going to get that was going to bring me some form of fulfillment. You know what the damnedest thing is? What fulfills me now is thankfulness.” 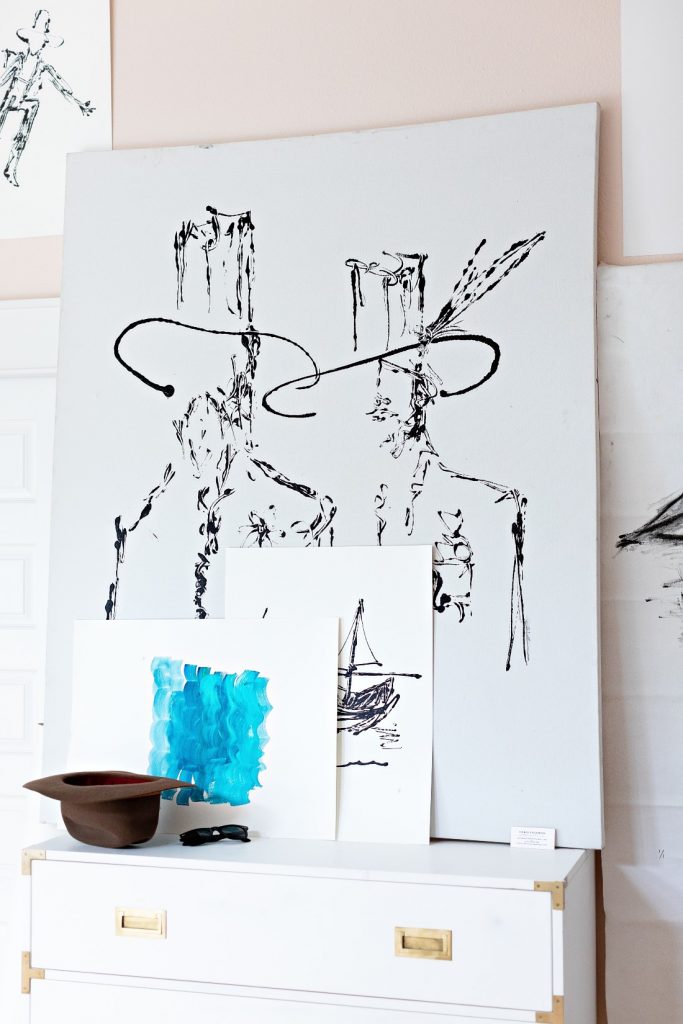 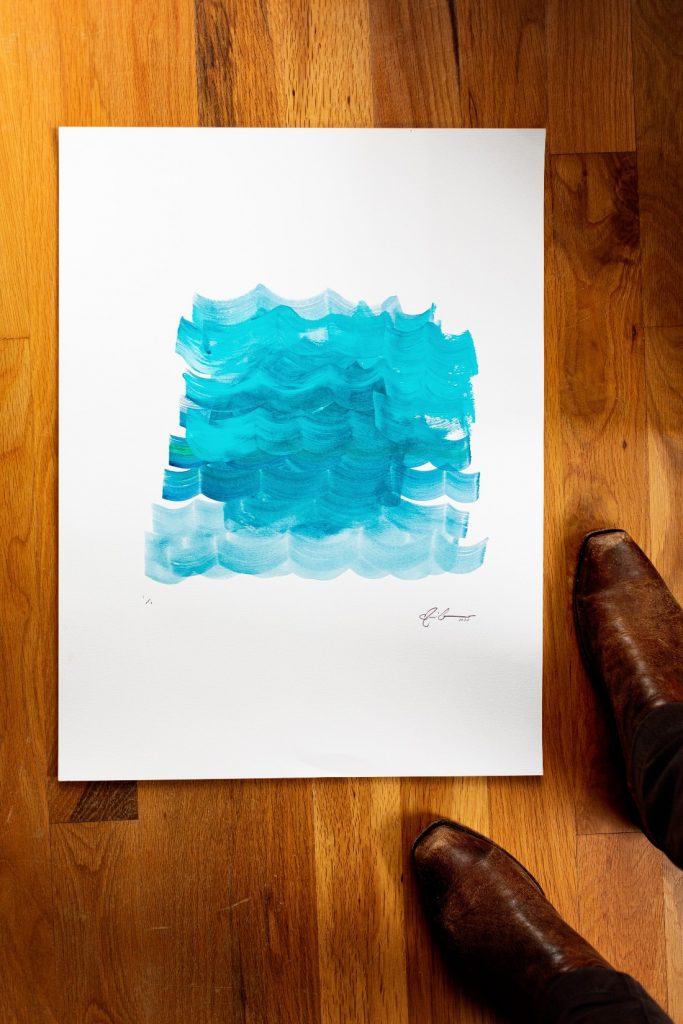 Chris made his last appearance with the Kings on September 24, 2014, at Red Rocks, and after amicably parting ways, he says he focused on starting a family with Holly. “I had an understanding with my buddies. I do love those boys, and I miss being out there at times, but I did not want to miss being a father.”

“Things really transitioned after my first child, and what grace that is.”

He and Holly enjoyed writing and singing together, performing at the Grand Ole Opry, and playing with friends like Sheryl Crow and the late John Prine. Chris makes no secret of his choice to seek therapy for things in his past that haunt him and says he and Holly have fought for their marriage through times of trouble. In awakening from his darkness and depression, he says he feels like he has grown as a man, but also reconnected with that inner child who saw a scary world, and says, “that’s okay.”

One day in 2013, Coleman’s creative nature led him to an art store where he purchased acrylic paints and an art pad. Once home, he sat down and painted a figure in black ink that had been on his mind for some time. The painter inside this musician had finally surfaced, and the signature works Chris produces now were born. By hand, rarely using brushes, he creates minimalist images that reflect his love of history and the Old West. “The aesthetic was there everywhere I went in life with my family—it was always John Wayne or Clint Eastwood. I was just steeped in it.” Chris credits his wife Holly with encouraging him to pursue this organic creativity, saying, “Without her, I would still be looking at that first painting sitting on the floor against my wall.” 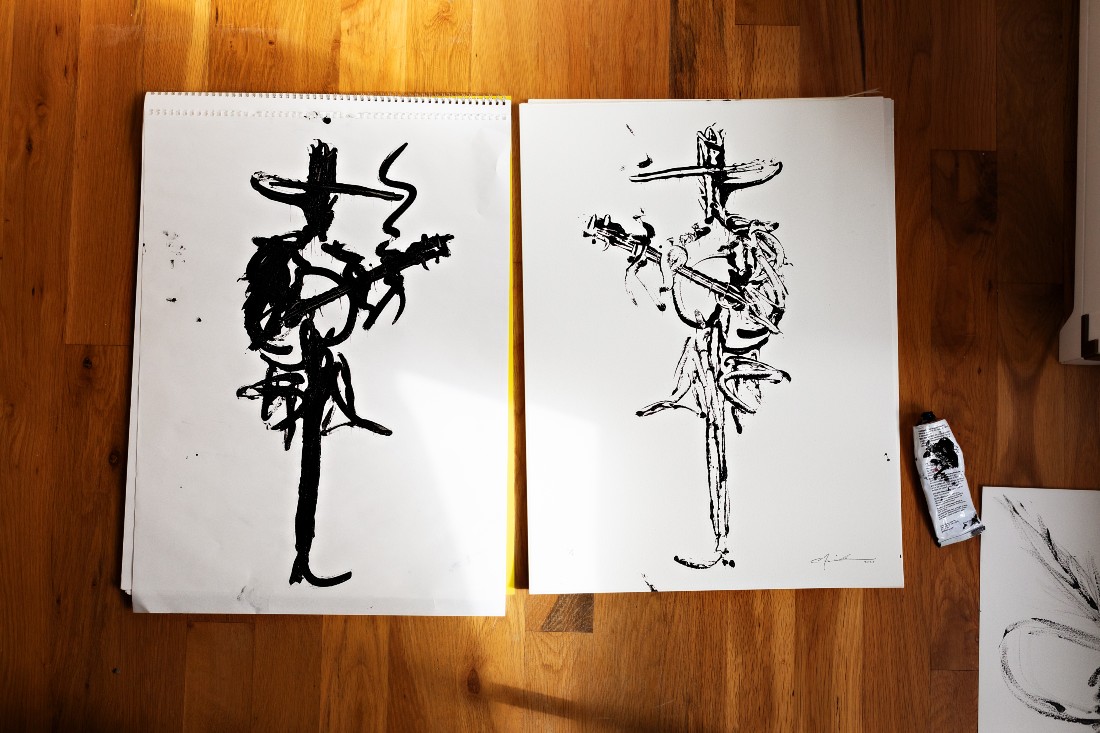 “When I had my first studio, I painted three figures and put them all together, and a story unfolded. The warring soldier, the pioneering cowboy, and the native who was here first,” he acknowledges the multi-faceted troubled history of our country. “They’re here together in postures of unity, so I called it The Alliance. Maybe that’s idealistic to think what could have been, but all I know is those are three among many of the major conflicting figures of that time in this country.” This remains a recurring theme, with serial versions seen in his deeply thought-provoking and moving works of old America. At one point, as we talked, he reached for a clean pad and a tube of black paint. I watched his eyes intently as he began to work quickly with his hands. After a short time, a figure appeared, leaving me in awe. Some might try to replicate his technique, but it would prove difficult. Chris’ works strongly reflect his depth and are as profound as the mind of the man who creates them, evoking powerful emotion in the viewer.

Coleman bristles at the thought of his work being considered genius. “Cavemen were doing this 40,000 years ago,” he laughed. “I spent so much of my time playing music for the wrong reasons — ego-based. I’m not quite sure what happened, maybe just life, but when you start creating and doing things because you’re driven to, and you love—that’s when the doors of opportunity fly open. I removed my ambitions for my own gain as ‘the thing’—it should be the story, that’s so much bigger than us.” 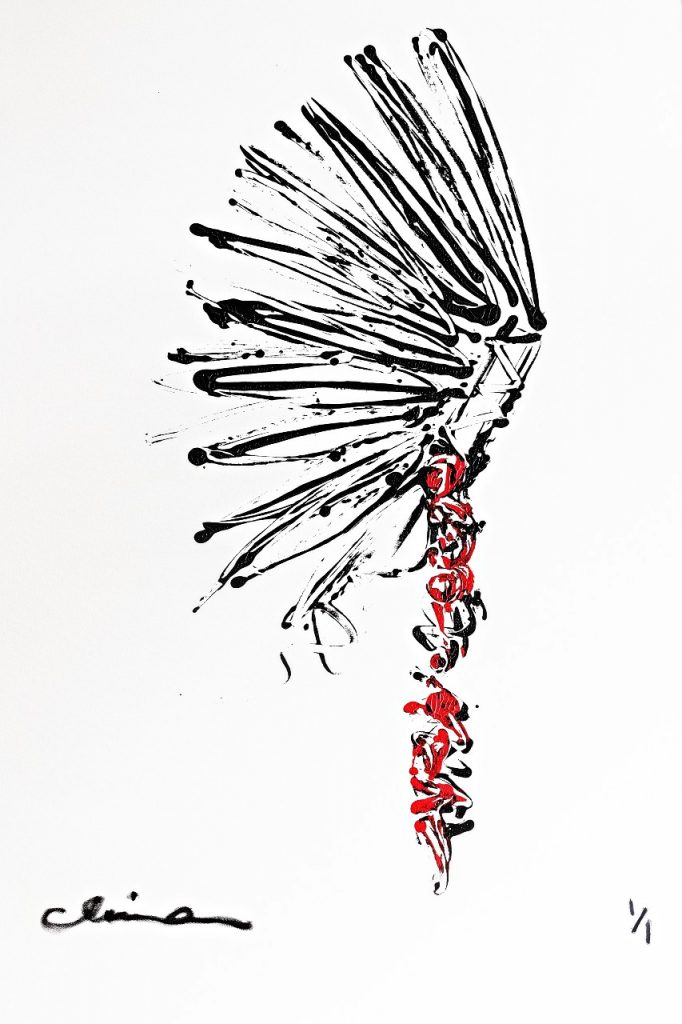 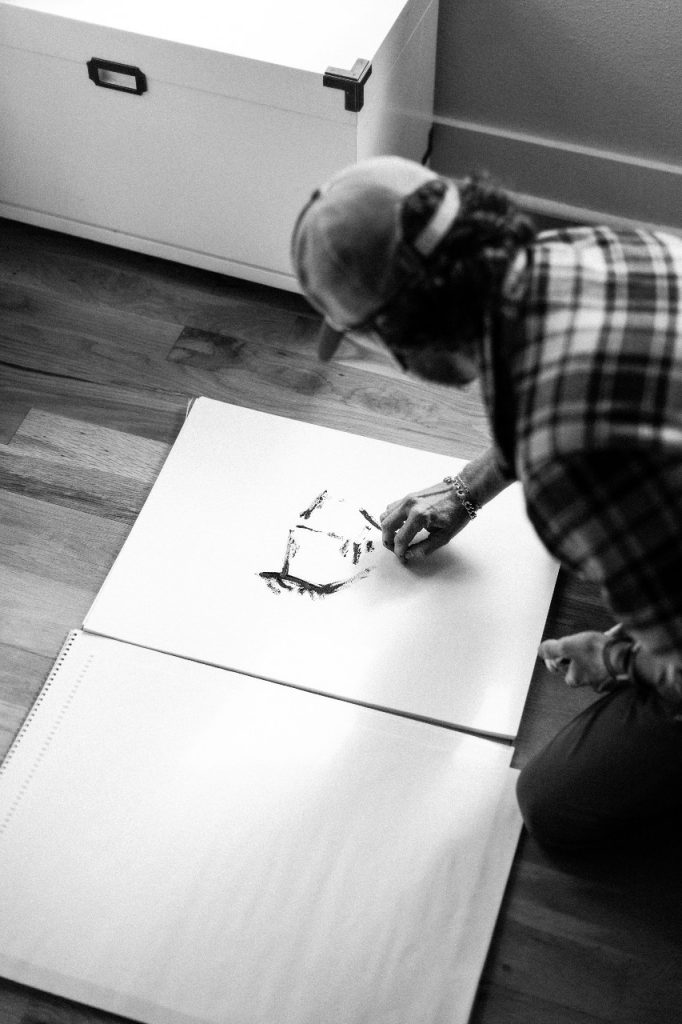 Chris has settled comfortably by the beach, finding peace in his writing, painting, and fiercely loving his family. He still plays music and heads to Nashville on occasion to record. When I asked him about the future, he said, “I can say wholeheartedly, I have lived a lot of the dreams I had as a younger man. I’ve also come through a lot of tragedy and trauma in my life. 2020 has been awful. It’s been like breathing underwater. But you know, it’s like surfing and fighting in those crashing waves, but you take that deep breath—the buoyancy and truth, life, it always rises, and it’s about acceptance. I’m so thankful that I can still be creative.” He says with humility, “I feel like I’m walking with such boldness, confidence, and peace.

It’s like a muse showed up to my door, and I’m trying not to scare her off.”

In my time spent with Coleman, I learned of the sincerity of his feelings for our country and its plights, past, and present. He considers himself a work-in-progress and is a positive, caring, kind-hearted man. With the Cowboy painting he gifted to me in hand, I walked out into the twilight and stopped for a moment to admire the evening breeze through the palms and the huge crescent moon lowering down toward the Gulf. I took in one of those long deep breaths Chris spoke of, and I had a sense of peace and hopefulness. Walking to my car with a smile, the sound of sand and gravel crunching beneath my flip-flops, I had a sudden urge to get home and put on my cowboy boots, if only for a little while.

Chris Coleman’s paintings are sold as originals only and can be purchased at his wife, Holly’s shop, White’s Mercantile in Nashville, Tennessee. He also accepts commissions. 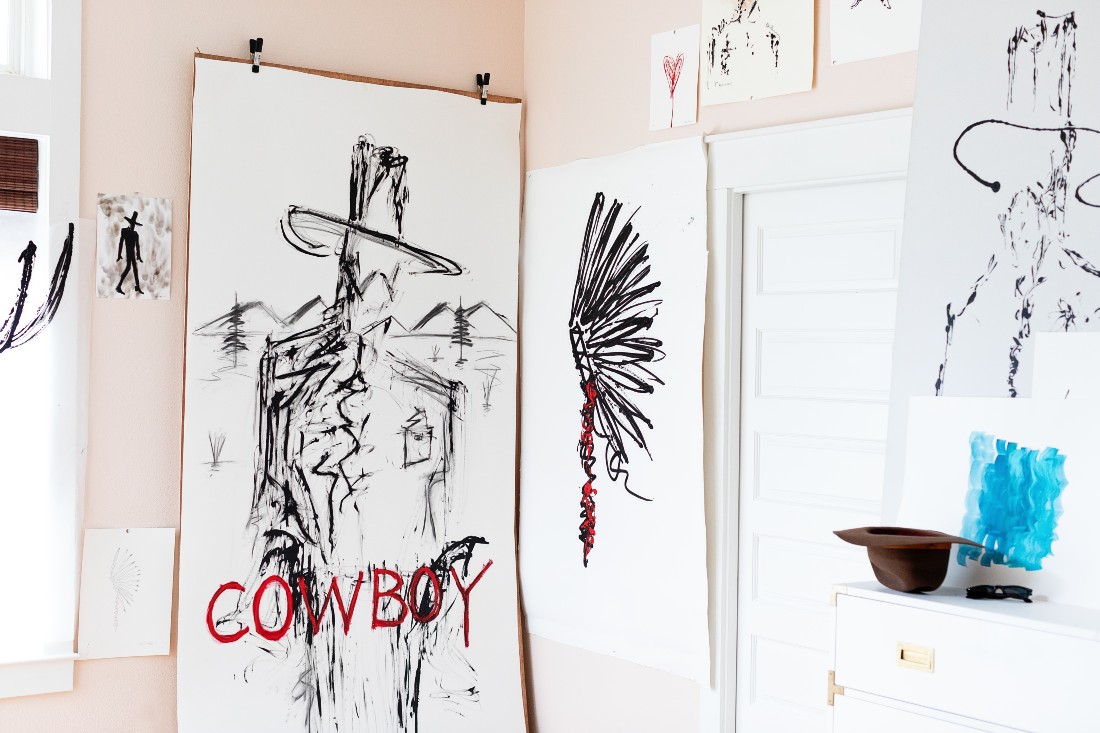