An Embarrassing Confession – 30A 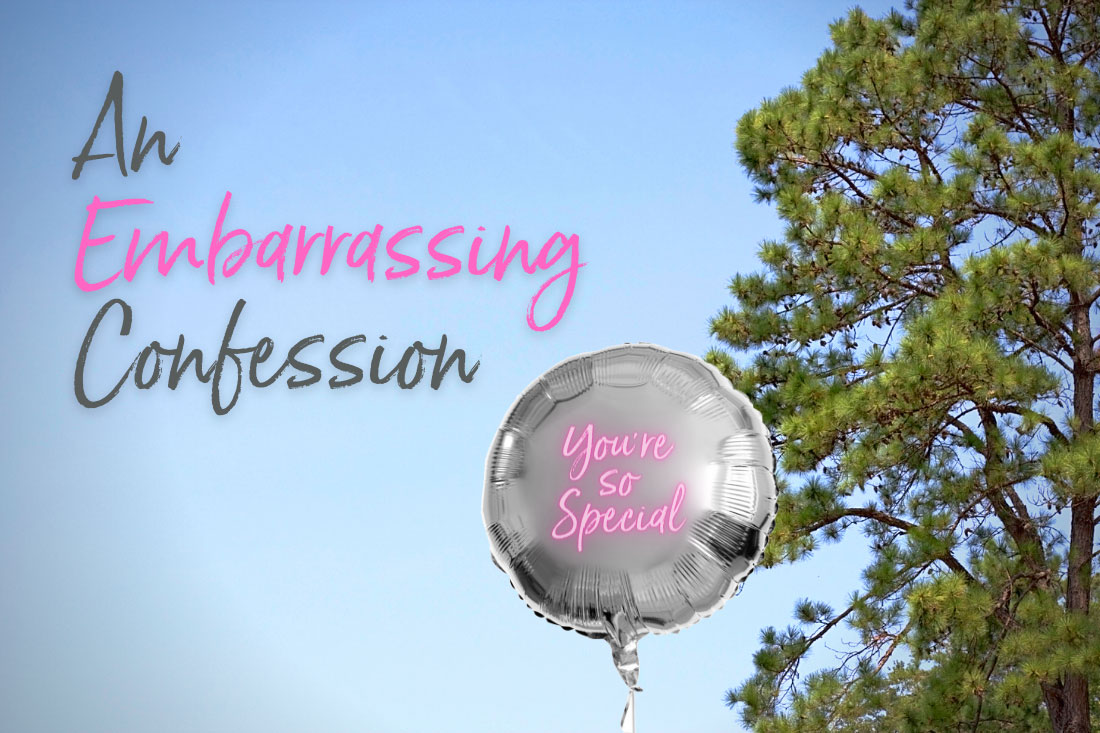 My cousin’s wedding was over.

Out-of-town friends and relatives had breezed into our backyard that morning. Decorations were distributed. Snacks were set out. Vows were spoken. Photos were taken. Hugs and high-fives were exchanged. Then, just as quickly as it all began, cousins and kin were gone, no doubt hoping to sneak in a little beach time while they were here on the coast.

From my front door, I saw the last lone indication that an event had even taken place here just a few hours before. A single silver balloon swirled around above our mailbox, a beacon to let our out-of-town guests know they’d found the right nuptials. “You’re so special,” the balloon promised in pinkish-red script.

I untangled the balloon’s string from the mailbox and began walking back toward our home. I was simply going to pop the silver balloon and put it in the trash. I wasn’t sure if it could be recycled or not.

But as I walked down our driveway, a childish impulse took over.

“I haven’t let a balloon go since I was a kid,” I thought to myself. The spring sky was a vivid blue, with a few billowy white clouds just for idyllic effect. A gentle wind blew from the south, and the bay behind our house was as smooth as a mirror. I knew it was wrong to let the balloon go, but in that moment, the mischievous kid in me proved stronger than the responsible knows-better adult.

I let it go. I stood in my driveway smiling as it slowly drifted up, up, up. “Oh no,” I thought as it almost got snagged in a pine tree in our front yard. How in the hell would I ever get that thing down from a 40-foot pine tree?

Fortunately, at the last moment, a puff of divine breeze diverted the balloon’s ascent, and nudged it north over my house and out across the bay. I scurried into the backyard and watched it sail ever so high. The afternoon sun shimmered off the reflective silver, making it look like a flying saucer. Up, up and up. I stayed and watched it glide north and upward until I couldn’t see it anymore. I sighed a nostalgic smile and walked back into our house, forgetting about it forever.

Or so I thought.

Two days later, I was skimming through my Facebook feed and saw a post that froze me in my virtual tracks.

The caption read: “Non-native invasive Mylar species. Wonder how far it drifted before landing in my tree.”

The photo was of a half-deflated silver balloon, tangled up high in a tree. “You’re so special,” it read.

It was my balloon. There was no mistaking it. 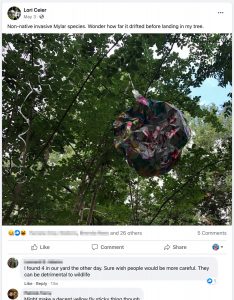 I looked out my window at the bay. It’s four miles across to the other side. I could make out tiny white pixels that I know are actually large bay-front houses. With Eglin Air Force Base’s vast forest preserve to the west and Choctawhatchee River Basin to the east, I estimated I could see millions of trees in my immediate field of view. Millions.

The photo had been posted by a friend named Lori Ceier. She lives near Ebro, some 25 miles northeast of my house. Not only is Lori a friend, but she’s also one of the region’s leading environmental advocates as the publisher of the highly regarded eco-blog, Walton Outdoors.

How could that possibly be my balloon?! With millions upon millions of pines as potential drop zones, what are the odds that my one little balloon landed in the yard of someone I actually know, much less someone who lives 25 miles away from my house! What are the odds that some other jerk released the same exact balloon? And then it occurred to me: Does it even matter if it’s the same balloon or not? One thing was certain: the laws of physics dictated that my balloon landed somewhere, even if it wasn’t in her backyard.

I was mortified. I was ashamed. That wasn’t someone else’s balloon. That was my balloon. And now it had become dangling garbage in someone else’s yard. Even worse, it was someone I knew and respected personally.

And yet, the blunt reality is that someone has to pick up every single cigarette butt callously flung from a car window. Those plastic grocery bags end up in ditches and streams and seas – and then in the stomachs of turtles, pelicans, and dolphins.

Releasing that balloon gave me a fleeting moment of childlike joy… followed by days of shame when I saw the selfishness of my sin. My self-prescribed penance is to apologize to Lori for junking up her yard, and to share the lessons I’ve learned:

1. You are special – but you don’t deserve special treatment.

2. Your choices matter, even – and sometimes especially – the little ones.

3. True happiness can’t be achieved when it’s at someone else’s expense.

I’m not planning to write each of these lessons on the chalkboard 100 times. Instead, I’m sharing them with you in the hopes that someone, somewhere has a lightbulb moment like I have.

Oh, and there’s one more very basic lesson I should’ve learned a long, long time ago: What goes up must come down.