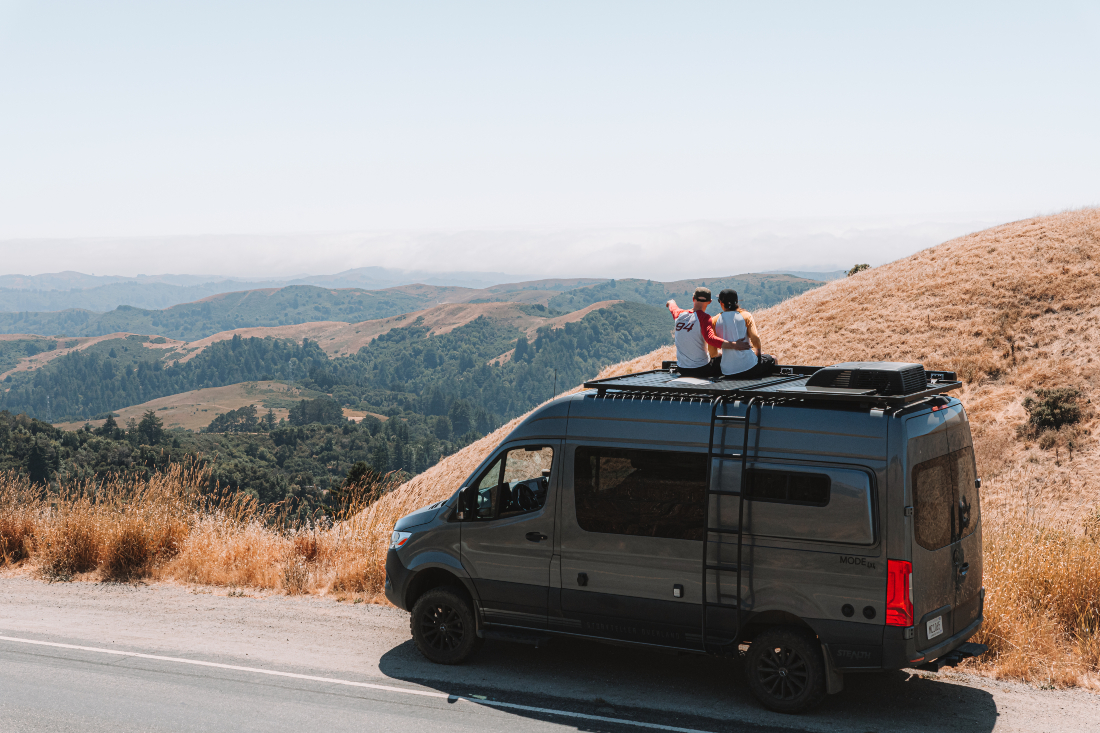 We’re living in the midst of an RV revival. More and more people across the country are embracing “vanlife,” renting or buying RVs in response to travel restrictions and coronavirus concerns during the pandemic. They’re hitting the road, with family, friends, and pets in tow, seeking out adventure without the stress or inconvenience of having to book or catch a flight, having to sleep in someone else’s space, or having to be on someone else’s schedule.

RVs have been part of Andrew Cooley’s life for as long as he can remember. He’s a fourth-generation RV dealer and worked for his parents for about 17 years before opening his own dealership at 31. He started washing campers when he was 12 and sold his first RV when he was just 15 years old.

A few years ago, Birmingham, Alabama-based friend Jeffrey Hunter called Cooley and pitched the idea for the adventure van company. Cooley met with Hunter and Lee Conn the following day to learn more about their vision. Cooley talked it over with his wife, sold their dealership, and went from being an RV dealer to an RV manufacturer in one fell swoop. 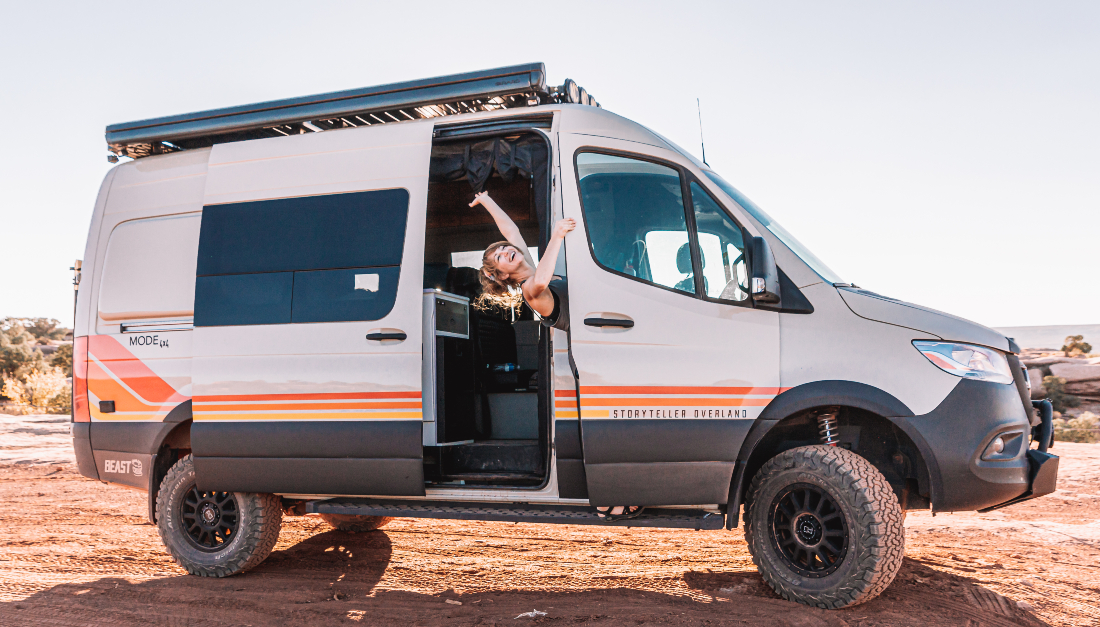 Hunter, Conn, and Cooley founded Storyteller Overland with the goal of serving the community of overlanders and bringing to market adventure vans with a custom quality fit and finish at a mass-produced price. The company officially formed at the end of 2018 and has consistently sold out of their inventory because of consumer demand. The community that they’ve created among their customers and fans is also a crucial component of the business.

“This special community brings together folks from all walks of life,” Cooley said. “Folks that are on the left or right side of the aisle have become friends and now they travel with each other. They probably would have never spoken to each other, but they had this commonality––the van and the community behind it. “

“Our main goal is to equip people with the proper tools to allow them to live as freely as possible, to explore every place that they can.”

Cooley attributes the uptick in popularity of RV travel to reclaiming a sense of control and an inherent human desire to explore. “We all want to be in control of our lives,” he said. “We feel like we have some level of control over what happens for us and to us on a daily basis.” When the pandemic hit, so many things were out of our control: mask mandates and travel restrictions enforced to help slow the spread of coronavirus kept people from doing things that were once taken for granted, like gathering with friends and family or going on vacation. RV travel and embracing vanlife helped to give people some of that control back. “I believe that people wanted to get out there and explore in a way they were still allowed to,” Cooley said. “Travel restrictions kept people from leaving the country, but you could still go to all the national parks.” An RV solves two key problems: how to get there and where to stay. 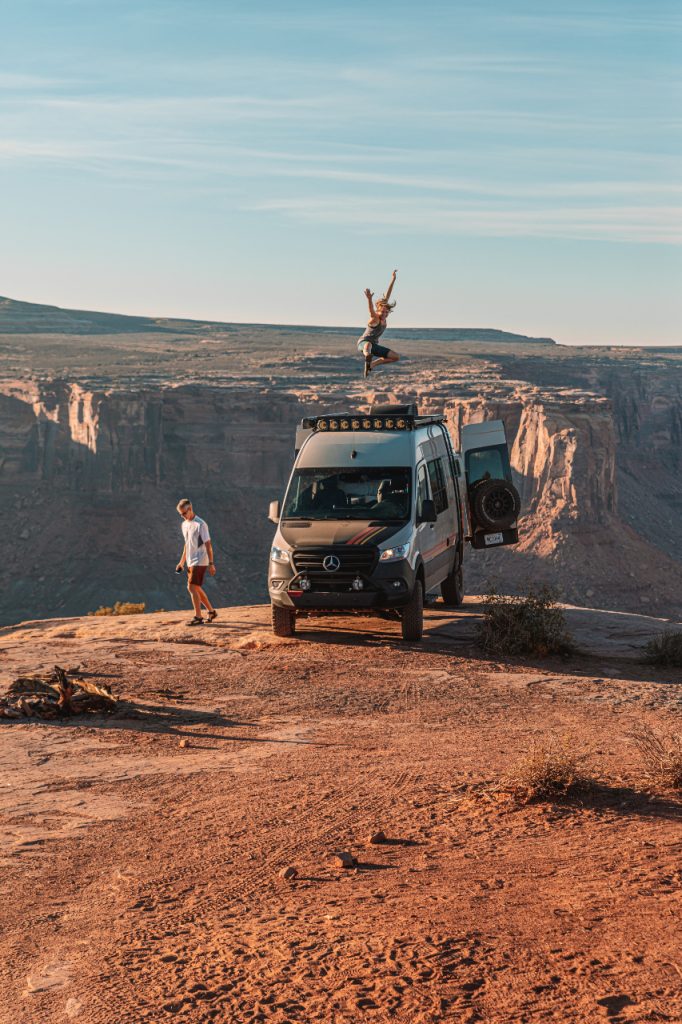 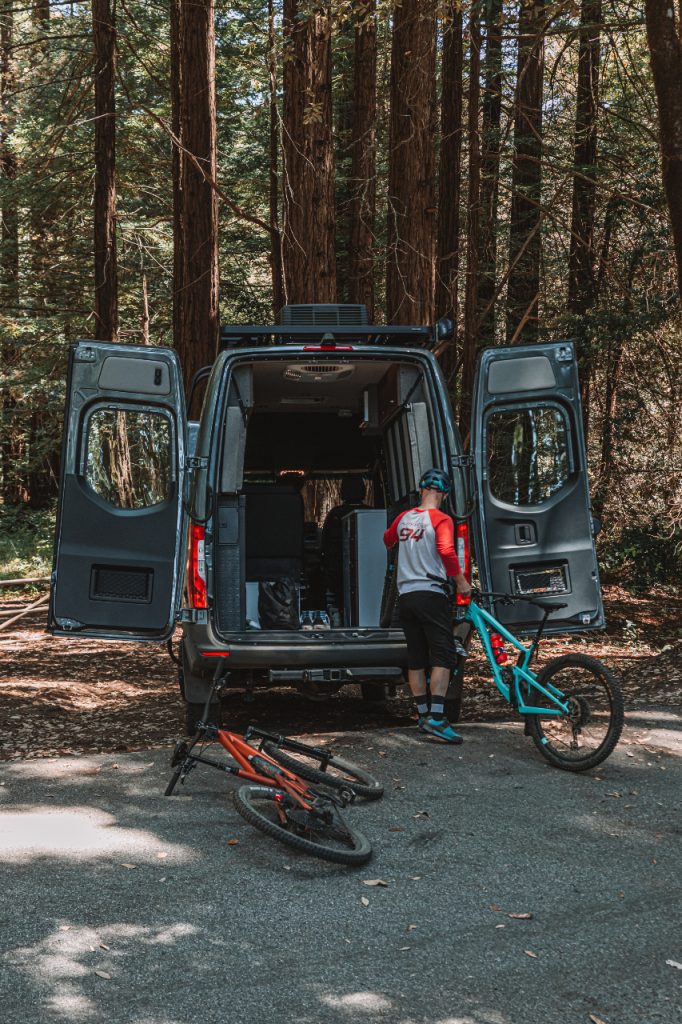 Packing up a van, loading your family or friends into it, getting on the road, and going wherever you want to fulfills what Cooley views as a deep-seated desire for adventure and exploration; kind of like Lewis and Clark. “RV travel gives you that sense of freedom,” Cooley said. “It instills confidence in the fact that you’re in control of what happens to you. You get to see and meet different people from across the country when you travel, and after you meet folks, you realize that we’re not so different.”

The reasons people are choosing RV travel vary widely, and Cooley has heard a number of stories from customers. One couple has toured the country, playing concerts from their van. Over the last year-and-a-half, they have put 70,000 miles on their RV, traveling coast to coast and playing countless venues along the way.

Another Storyteller Overland customer purchased a “Beast MODE” van to facilitate her hobby of collecting gems and stones. The van she bought was totaled just two days after she bought it, and she couldn’t get another one as the company was sold out, with a waiting list of a year. Storyteller Overland ended up selling her a Beast MODE model that they never even planned to sell, simply to get her back on the road. She told Cooley that it allowed her to collect gems and stones for one last year before her age made it physically unfeasible. 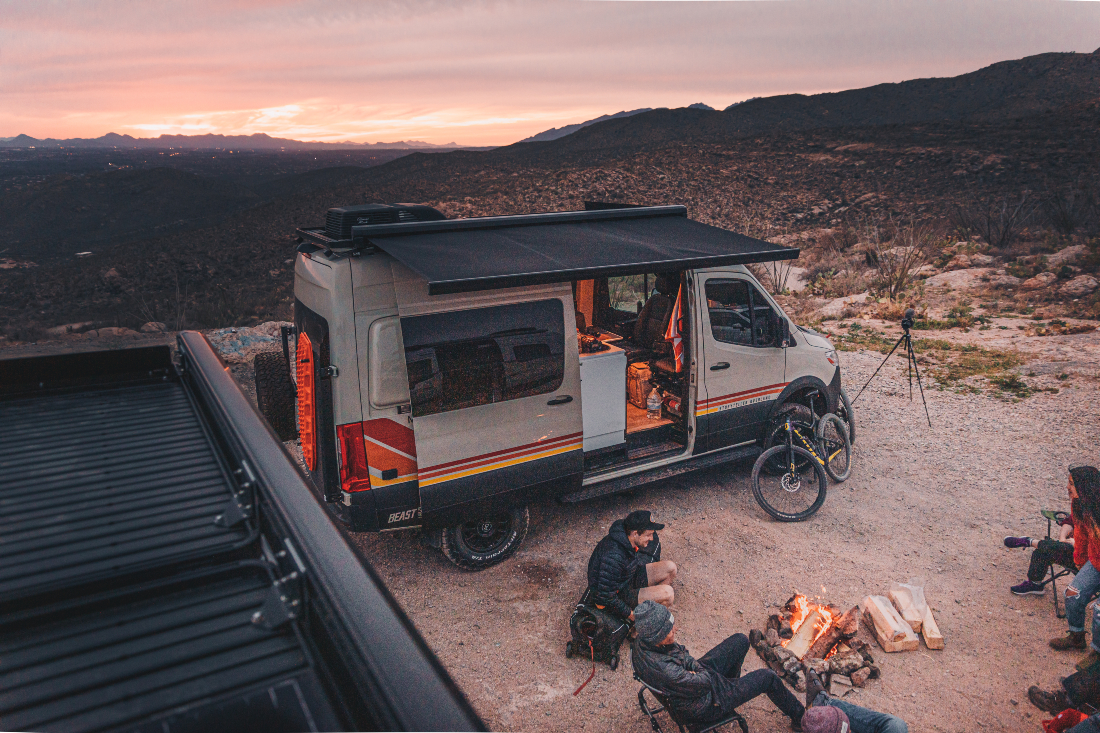 Another customer bought one of their vans to take her mother across the country. “The mother was moving into the winter stages of her life, and her daughter realized that their time was short,” Cooley said. “Her mother had a ventilator, and because our Storyteller vans generate their own power as they’re driving down the road, she was able to take her mother on this trip and have power every step of the way.”

Whatever your reasons are for embracing #vanlife, we’re all for getting out there and living the life you’ve imagined. The pandemic has caused many of us to reevaluate priorities and to realize the importance of human connection. RV travel has allowed many people to escape the stresses of the pandemic, if only for a few days or weeks, out on the open road and into the wilderness where there’s no need to worry about social distancing. For some, it’s about embracing minimalism, simplifying their lives and living with less, trading possessions for experiences. Adventure is out there––what will your story be? 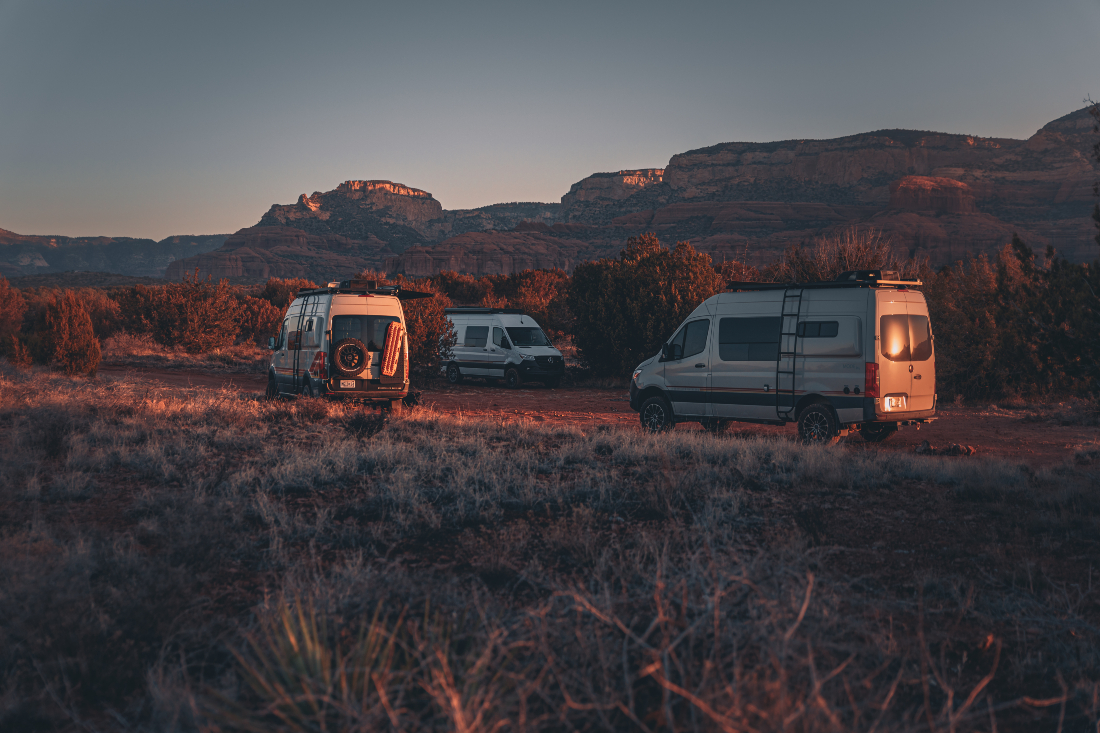 Grayton Beach State Park (Grayton Beach, Florida): Named the best beach in America by Dr. Beach, the secret is definitely out on this picturesque park. Key features include Western Lake, a 100-acre coastal dune lake, a 4.5-mile trail, and a 1-mile nature trail that goes through the dune ecosystem, along the salt marsh, and through the pine flatwoods.

Tillicum Beach Campground (Yachats, Oregon): Enjoy views of the Oregon coastline and whale-watching from one of the many beachfront campsites on this campground. Surf, swim, and wake up to the sound of waves crashing onto the shore every morning.

Grand Haven State Park (Grand Haven, Michigan): This 48-acre park boasts a half-mile of Lake Michigan shoreline, and the mouth of the Grand River runs along the north side of the park. Much of the park is covered by beach sand, and you can enjoy views of the Grand Haven pier and two lighthouses.

Camp Gulf (Miramar Beach, Florida): This family-owned and operated campground in Miramar Beach has beachfront campsites, which give guests a front-row view of the Gulf. Campground amenities include two pools and a big water slide, a casting lake, an activity center, free Wi-Fi, three bathhouses, a laundry facility, and recreational rentals.

Assateague Island State Park (Berlin, Maryland): Maryland’s only oceanfront park is located on a barrier island that’s home to deer, waterfowl, wild horses, and more. Set up camp just a few steps away from the Atlantic Ocean and enjoy the two miles of beach, secluded coves, and marsh areas.