The Fun and Funky History of Grayton Beach, Florida - 30A 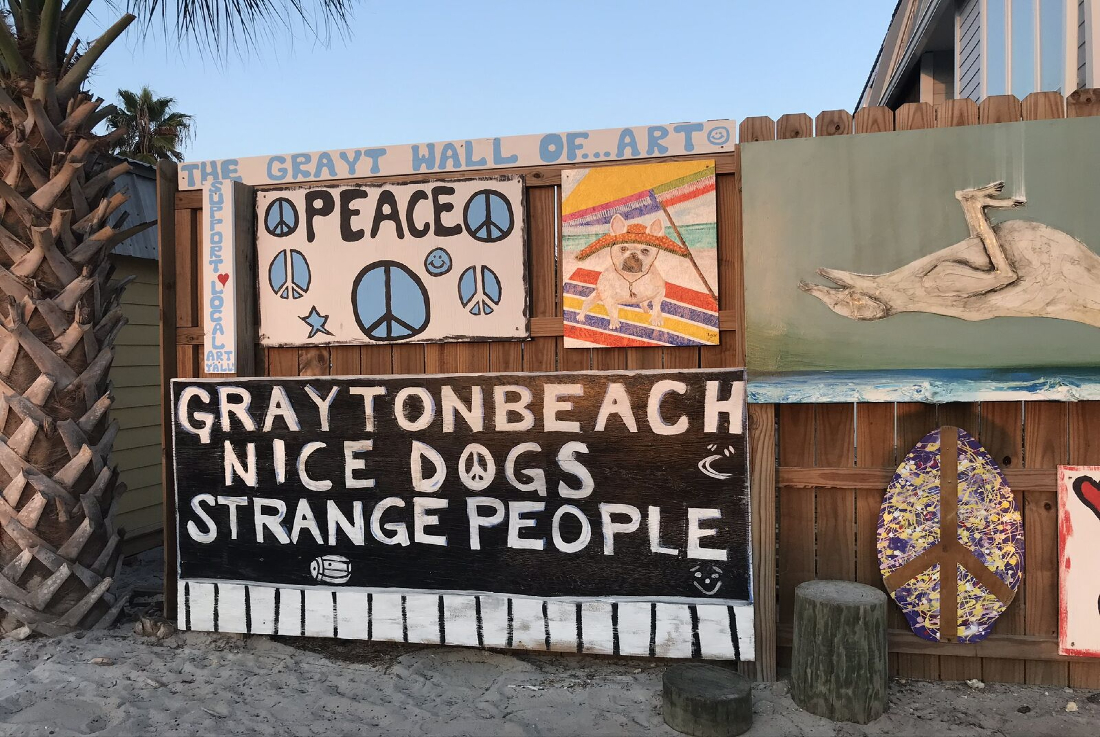 ‘Nice Dogs, Strange People’ – the unofficial town motto says it all. Grayton Beach is the funky heart of 30A.

Populated by a mix of dotcom millionaires, fishing charter captains, grammy-award winning artists and families who have been walking its unpaved streets for decades, it isn’t flashy, all mod-cons development, its stores don’t slap you with a sticker-price shock like other tourist traps, nor is it owned by a corporation or developer looking to expand and grow.

This is the epitome of a cool coastal town, one which features in the top ten lists of all those magazines which rank and score beach towns and idyllic vacation hot spots, and while this is one of the oldest settlements along this stretch of coast, Grayton still feels fresh and continues to live a ‘most interesting life’.

Honestly, it’s always been a little bit different, in fact, swimming against the tide was in Grayton Beach’s original founders’ DNA. 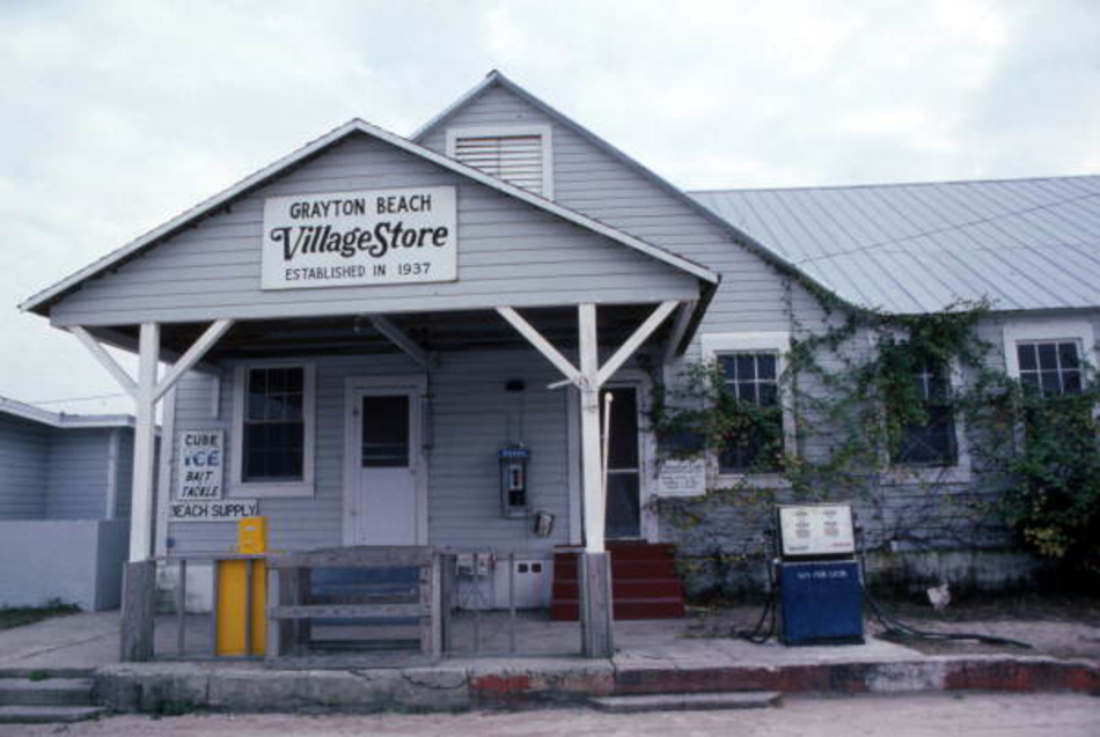 When Army Major Charles T. Gray built his homestead in 1885, the federal government owned much of the land in and around what we know as Grayton Beach today. Very few people had reason to settle here; the soil being thin and too poor to farm, and investors and speculators favored the richer timberlands away from the coast. Only Point Washington on Choctawhatchee Bay was a settlement of any recognition anywhere in what we now call South Walton.

But this didn’t deter Gray from establishing himself here and, five years later, when Army Generals William Miller and William Wilson moved to the area and mapped out the village, they named it in honor of that first brave resident.

Grayton Beach was born. We were officially on the map.

The Tourists are Coming! 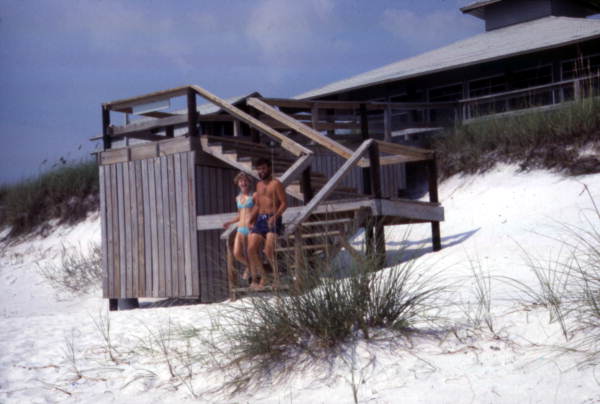 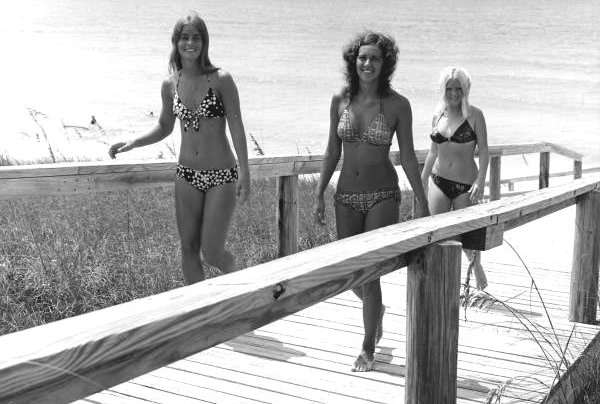 At the beginning of the 20th century, Grayton Beach began an early experiment with tourism aiming to become a vacation retreat for families from further north in Florida and Alabama, but with no bridges over the Choctawhatchee and little more than sandy trails, only the most adventurous, intrepid beachgoers made the journey.

Among those who did persevere with the day-long trip from the railway town of DeFuniak Springs were W. H. Butler and his son, Van R. Butler. The Butlers were ultimately to become one of Grayton Beach’s most storied families with streets, buildings, and the local school still named after family members. But in an interview shortly before his death in 2000, Van R Butler said: “his family originally never intended to settle full-time in Grayton Beach.” But, as many current residents will attest, there is a strange magnetism, which draws you back to this town.

At that time, Grayton Beach was just a summer resort, a mix of cabins and land lots supported by Butler’s General Store. During the winter, Butler and his wife, Helen, would move to Point Washington where he was school principal, and only when — or if — the summer tourists arrived, the Butlers would move back to Grayton to rent their cottages or sell a real estate lot and, of course, operate the only store.

The store also doubled as the community hub, hosting dances and get-togethers, a tradition that lasted across the ages. In the fifties and sixties, when it was billed as the White Elephant, the wooden clad rooms attracted youngsters from across the area to its jukebox and pinball machines, for impromptu dance nights and kindling numerous holiday romances. And now, after a brief period as Paradise Café, it houses Red Bar, a bistro with live music and a key part of the Grayton night-life scene.

The next significant event in Grayton Beach’s turbulent history was the hurricane of 1926. This storm was so violent, it is credited with busting through the sand dunes to create Destin’s East Pass and turning the Choctawhatchee Bay into a saltwater body. Closer to home, the hurricane also swept out the foundation of Major Gray’s former home — which by now had been operating as a hotel known as The Grayton Inn or The Grayton Grand — and giving it the nickname the ‘Wash-A-Way’ which it is still known by today.

The storm also blew and washed away a good portion of the dunes at Grayton and left the beach flat and hard enough that Van Butler and a friend drove a Model T Ford along the shoreline to see what was left of Destin. This is the first recorded incident of cars driving on the beach at Grayton. 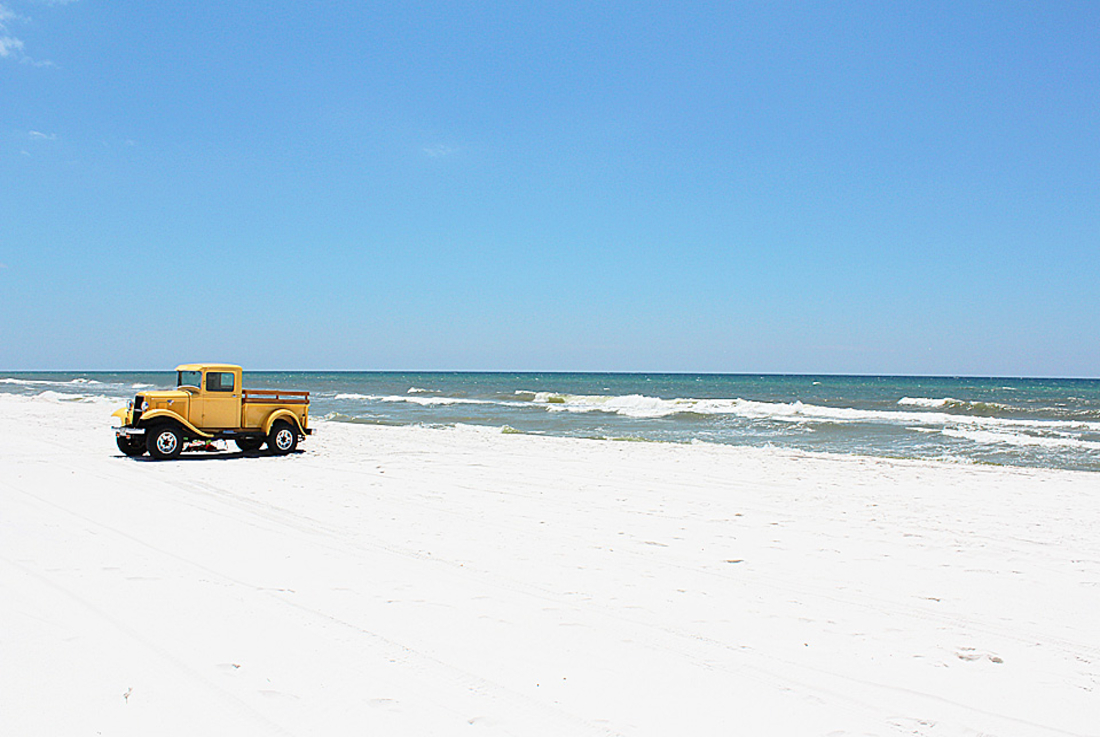 Today, you need a permit to drive on the beach, and getting one is amongst the most hotly contested lotteries anywhere in the world, with only 150 annual permits offered. Rumour — the unofficial language of Grayton Beach — says the right to drive on the beach was secured when the state and county acquired the land and access points, and was baked into the deal by local landowners, fishermen, and neighbors keen to protect this local peculiarity. Those who had permission to drive on the beach from before the lottery system was introduced a decade ago are ‘grandfathered’ in, but each spring, the dark trade in pre-registered, grandfathered homes and vehicles, voter registration forms, and the alleged black-market in permits is now the stuff of Grayton legend. Displayed like badges of honor, the brightly-colored stickers take pride of place on the rear windows of a procession of beach-bound trucks and jeeps.

30A.com is live now in Grayton Beach during a very special occasion!

In the 1930s, President Franklin D Roosevelt’s New Deal was seeing new infrastructure being built across America and Grayton Beach, and the surrounding area benefited by becoming easier to reach following the construction of Highway 98, the 331 bridge, and the Intracoastal waterway. The number of people visiting and buying property grew exponentially and in the 1940s, the Choctawhatchee Electric Cooperative brought electricity to Grayton.

When the US was dragged into the war in 1942, the U.S. Coast Guard established a 40-man station here to keep a lookout for German submarines, with the federal government renting many of the homes for barracks and offices. The ‘Wash A Way’ was commandeered by the military during these times and visitors to the house can still see the carved and written names of the officers stationed there in a walk-in closet used as a dark room.

Another wartime innovation, which still exists today, is the painted Grayton Beach marker — an arrow pointing north in yellow across CR 283. From the air, pilots still use the marking to determine where they are and monitor their course. 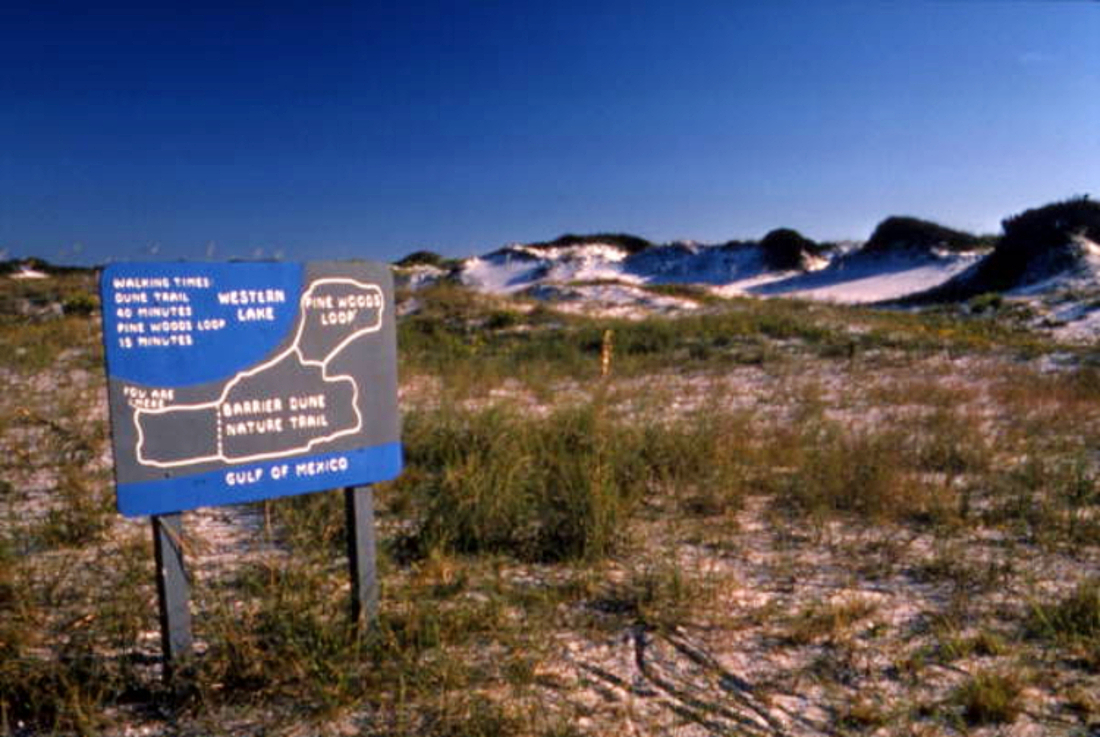 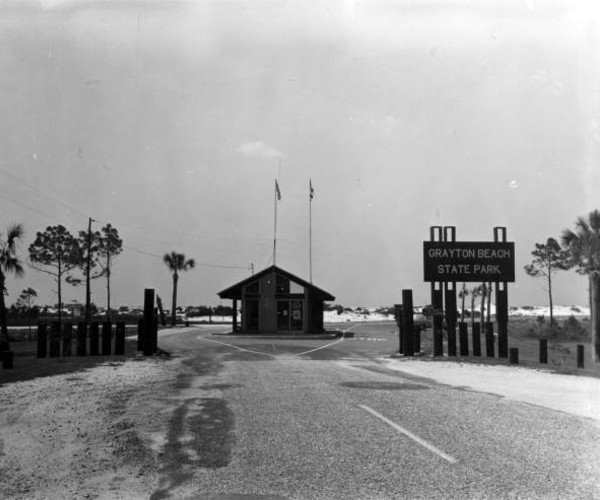 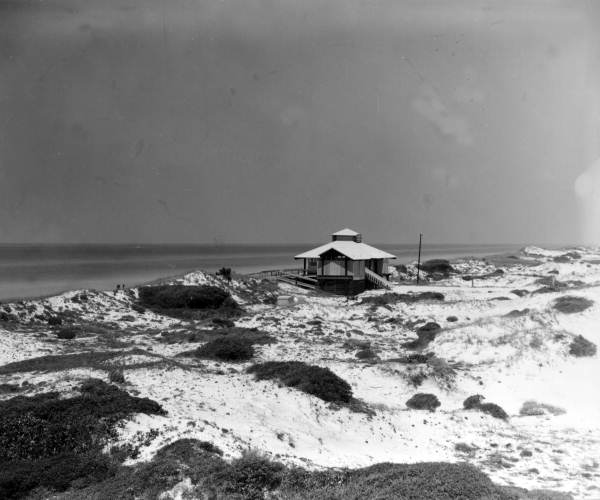 By the sixties, the area was an established vacation destination, attracting not just families from across the South but greedy developers and builders looking to acquire land and develop resorts. Local residents and homeowners were up in arms and lobbied hard for the character of Grayton Beach to be protected.

In 1967, the state used its land to the east of the town to create the Grayton Beach State Recreation Area and a few months later, acquired by lease from the local Board of Education, a further 2,200 acres of land which securely engulfed Grayton to the North, East, and West with state-protected forest and park.

But developers are a resilient breed and continued to look for opportunities within Grayton Beach itself. The residents had to act and defend the town they cherished.

Local resident, Bet Haynes — a formidable woman known as BeachMama by friends and foes alike — was with her daughters spending a day at the beach during the summer of 1974, when they spotted earthmovers on the sand dunes and suddenly realized their treasured beach was being threatened.

“Until then, no one really thought about who owned the land,” Haynes’ friend Bibba Jones told local reporters the next day. “We were carefree, having a great time on the beach, and didn’t think that it could possibly ever end.”

In an instant, the only thing BeachMama and her friends could think of doing was to stop the earthmover — Grayton Beach-style!

“We lay down in front of the tracks to prevent the bulldozer from moving,” Jones said with a laugh. “They couldn’t do anything then.”

Another decade saw local residents and campaign group, Friends of Grayton, defending their beach, until finally, in 1985, the state bought the beachfront, the dunes, and forest land. But, this being Grayton, all was not as it seemed, and when the state tried to trade away beachfront property to developers in exchange for land at Topsail Hill, many Grayton Beach residents and neighbors once again had to organize and protest until, thankfully, the deal fell through.

To keep Grayton’s ‘weird’ quotient high, the eighties also saw an inter-galactic discovery on its beach. On October 30th, 1983, a Destin-based doctor John Green and his nerdy pals were out on the beach with their metal detectors, looking for Spanish and Indian artifacts.

What they first thought was cannonballs fused together, later turned out to be a 24lb, 4-billion-year-old meteorite which had crashed to earth around 400 years ago.

Dr Green’s find was a national news story and attracted the attention of John Dupont, scion of the chemical and manufacturing giant bearing his name. His representatives flew down to Grayton Beach with a suitcase full of cash and the rock was whisked off to wherever Dupont hides out. This find was only 10 days before the State took control of the beach and park, and if it had happened two weeks later, Dr. Green would have been forbidden from removing the meteorite and wouldn’t have gathered his small fortune! Lucky? Good timing? Only in Grayton Beach! 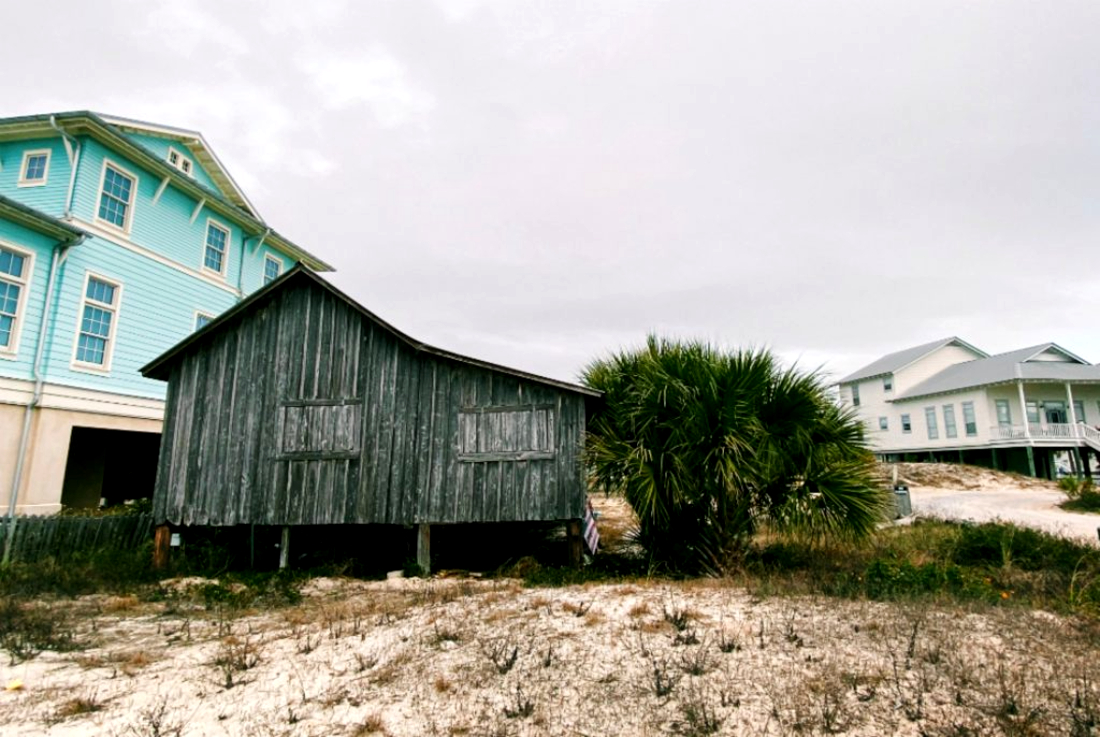 Since the county and the state secured the land around Grayton Beach, the recent disputes have been restricted to differences of opinion about tearing down older homes to replace them with large rental properties, how to manage the summer traffic and regulate parking, and how long and late into the night the live rock and roll music can emanate from the Red Bar.

Grayton Beach is perhaps one of the most characterful locations anywhere along the Gulf coast. It offers beach and dune lake access for boating, kayaking and paddleboarding, a selection of homes in the traditional Florida cracker style, and sneak-peaks of country music legends, TV and filmstars sipping on cold drinks beneath baseball caps and dark sunglasses.

And those friendly dogs, lying flat out in the road without a care in the world. Like it has always been.

Is this the BEST BEACH in the world?? 🤔🌴

For more cool stories about Grayton Beach, check out our Ultimate Guide to Grayton beach.