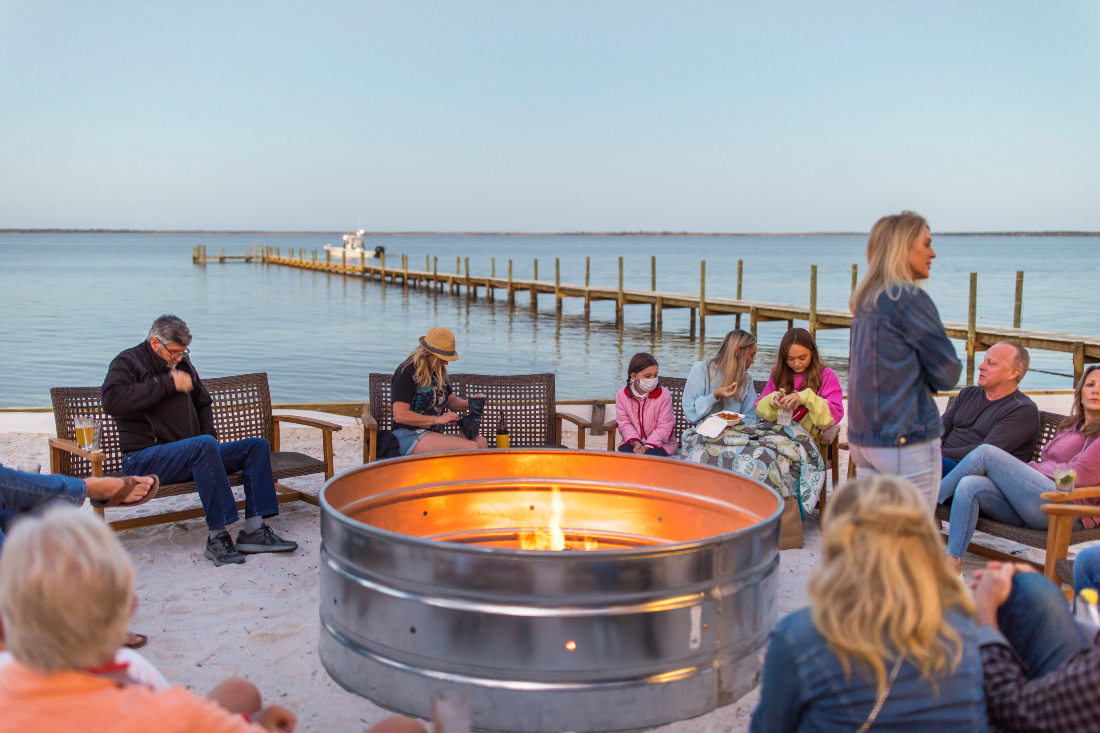 The Gulf Coast boasts some of the most picturesque waters anywhere, and there are a number of beachfront bars where you can take it all in. But why spend your time lugging around a heavy cooler, or fighting for a parking spot, when you can just boat up and imbibe? (Responsibly, of course!) Get on board, motor over to the dock, tie up, and enjoy these bars you can reach by water. 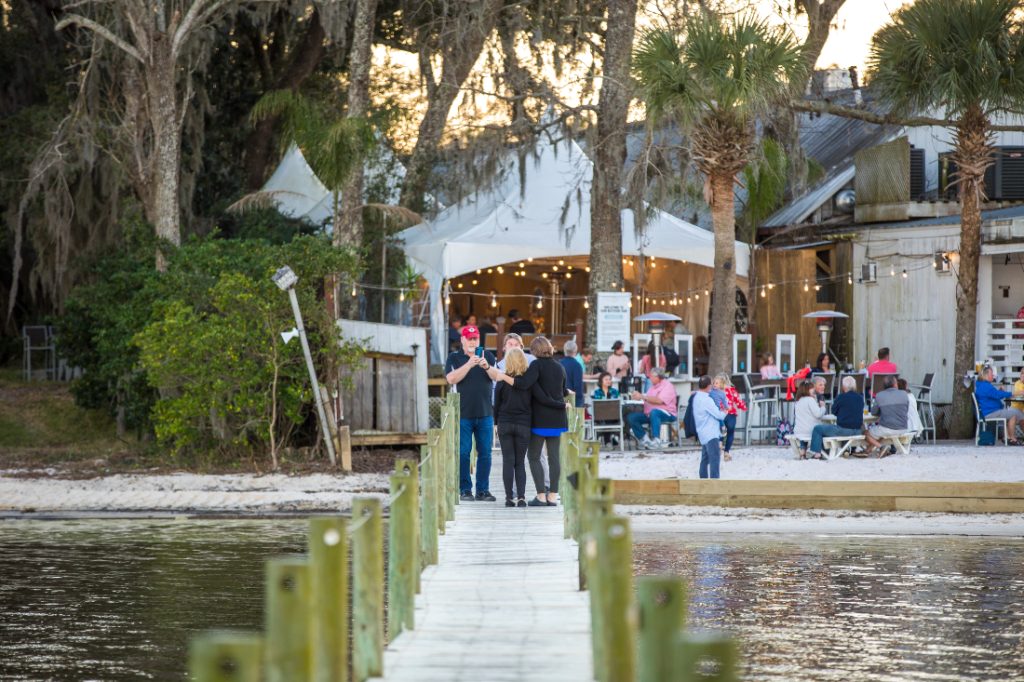 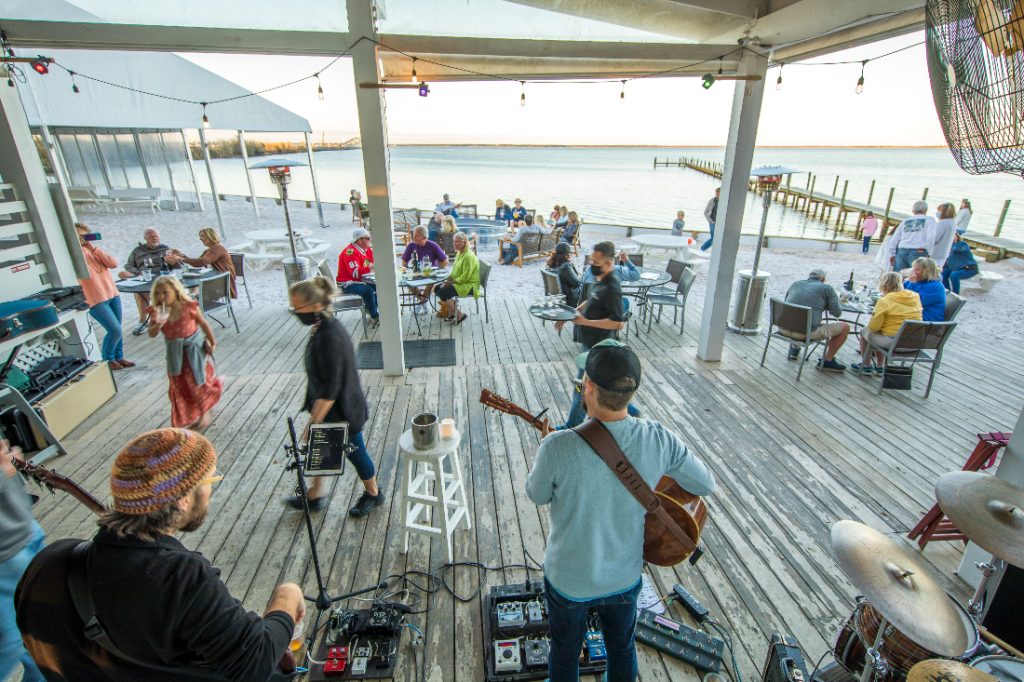 The Bay made some boat-friendly upgrades so sailors can easily enjoy their inventive cuisine, refreshing drinks, and live music. “A hurricane wiped out our pier,” said Blake Whorton, general manager. “In rebuilding, we added three extra slips. Just tie-up, and take the pier over. We have beach bonfires every Wednesday and Sunday. It’s a relaxed vibe away from the hustle and bustle.”

In addition to Chef Jim Shirley’s famous Bomber Burger, and selections inspired by his time living in Japan, there are tasty cocktails. Whorton said the Tropical Lemonade, made with nectarine vodka and fresh-squeezed juices, is not to be missed. Map your course for the Bay and its deck overlooking Choctawhatchee Bay for some choice sunsets and live music. 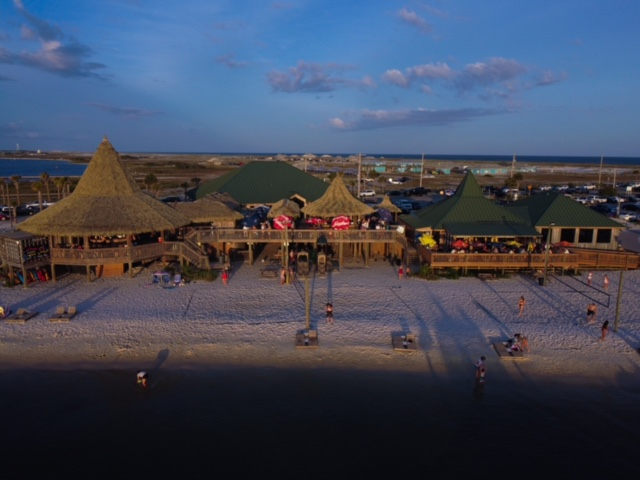 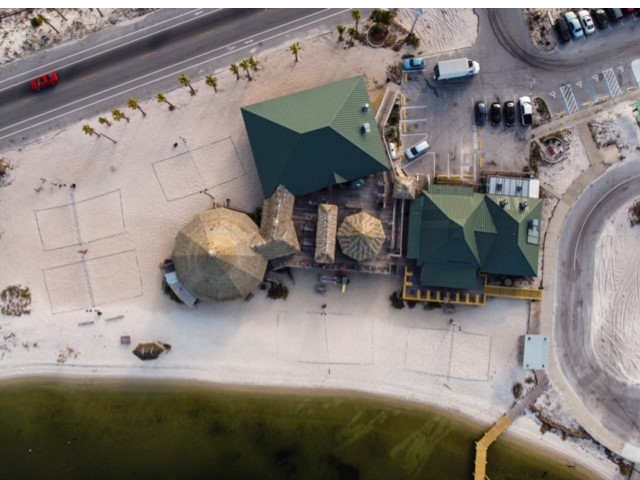 Located at the foot of Navarre Beach Bridge, Juana’s Pagodas has been a family-owned and operated business since 1989. Before becoming the sprawling bar and restaurant complex it is today, it was a small rental operation. The Rudki family recalled, “We figured out real quick we weren’t going to make a living just renting jet skis and boats,” so they built a bar on the beach. But people wanted food, so they added another grass hut. Hurricanes over the years knocked those structures down. “Every time, we rebuilt bigger and stronger.”

Now Juana’s Pagodas boasts six lit volleyball courts, a dance club, two restaurants, and a west-facing deck with an outdoor bar to catch those gorgeous Gulf sunsets. Nosing up on the beach is one option, but boaters looking for more secure parking can utilize the transient slips with deep water dockage at the boat ramp. Rudki added about coming by boat, “On a chart, it looks intimidating. But, just turn south into our dock, halfway between channel marker 93 and Navarre Beach Bridge. Head for the water tower, and it’s a straight shot.”

Whether cruising the Great Loop or looking for a tiki bar to pull up to, Juana’s Pagodas has you covered. And don’t forget to order a Juanawacker, their take on the famous tropical drink. 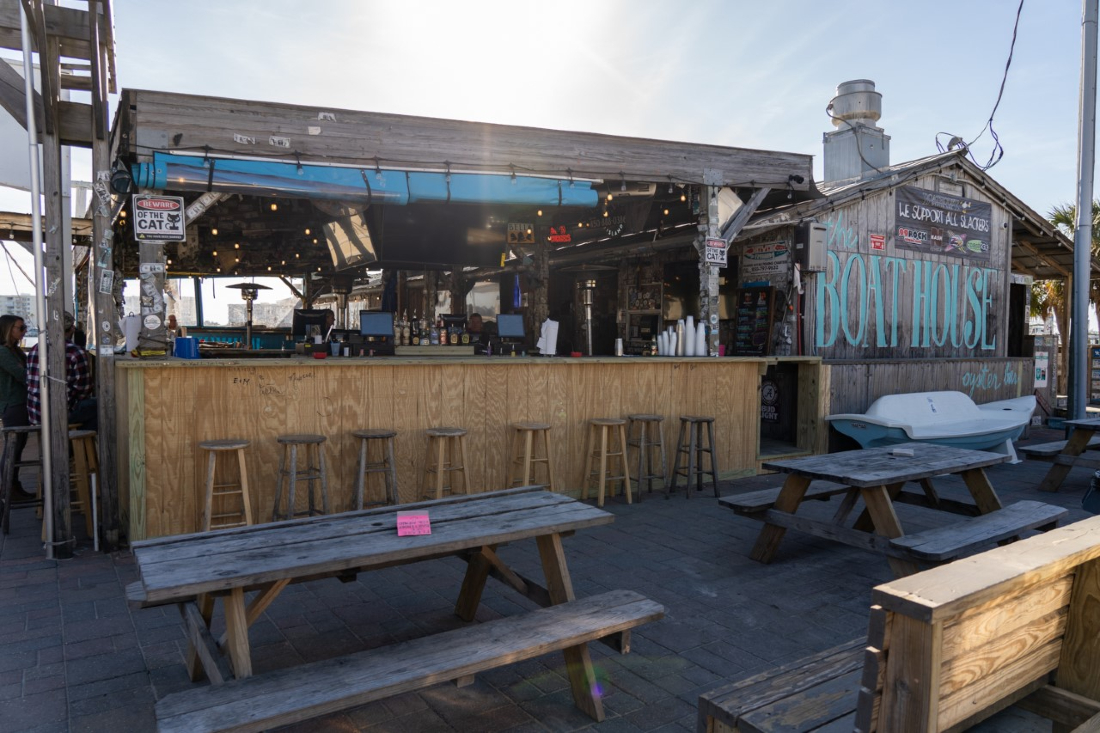 Miss Wanda and Action Jackson opened “a little hole in the wall where the kitchen wasn’t even attached in 1986,” said current owner Missy Schofields. Hurricane Opal took it out, but they rebuilt, and in 2012, they added a courtyard with nine tables where customers start up conga lines to the nightly live music. The Schofield’s took over in 2018 to keep the party going in the spot “where every hour is happy hour.” The Boathouse Oyster Bar now has three bars and is known for its briny bivalves.

According to Schofield, boat parking is an “if you know, you know” situation.

All public slips are first come, first serve. The lone long boat dock isn’t named and sits in front of a vacant, new construction restaurant. Four public spots are available on the west side of the dock.

Cast-off worries at Boathouse Oyster Bar where the vibe is laid-back, and no shoes, no shirt gets you service. Try their Boathouse Breeze, and settle in for one of Destin’s favorite local hidden treasures.

4. The Oar House on Bayou Chico 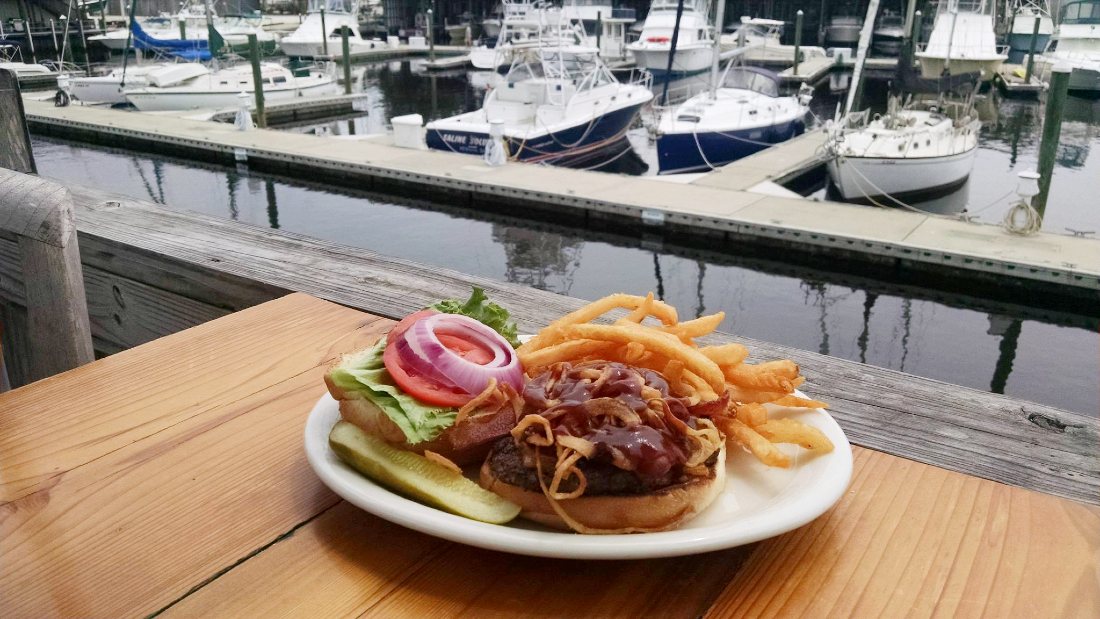 It started with a talking fish named Jezebel. Legend says a young woman, who was married to a deployed naval aviator, became lonely for her husband and needed a little extra cash, so she opened a small bar and grill on Bayou Chico. One day when out fishing, she happened upon a magical talking fish who promised a reunion with her husband if she drank the mysterious potion he offered. Jezebel swallowed it happily, and as legend goes, she can still be seen off the deck of the Oar House to a lucky few.

Minutes from downtown Pensacola, the Oar House on Bayou Chico offers spectacular sunsets, a view of Bahia Mar Marina, and some tiki-roof shade to enjoy your favorite libation. Visitors will find live entertainment, tasty bayou bites like Cousin Boudreaux’s etouffee, and beach games like table tennis and corn hole. Boat in, tie up on the attached dock, enjoy some sunset cocktails, and maybe catch a sighting of Jezebel. 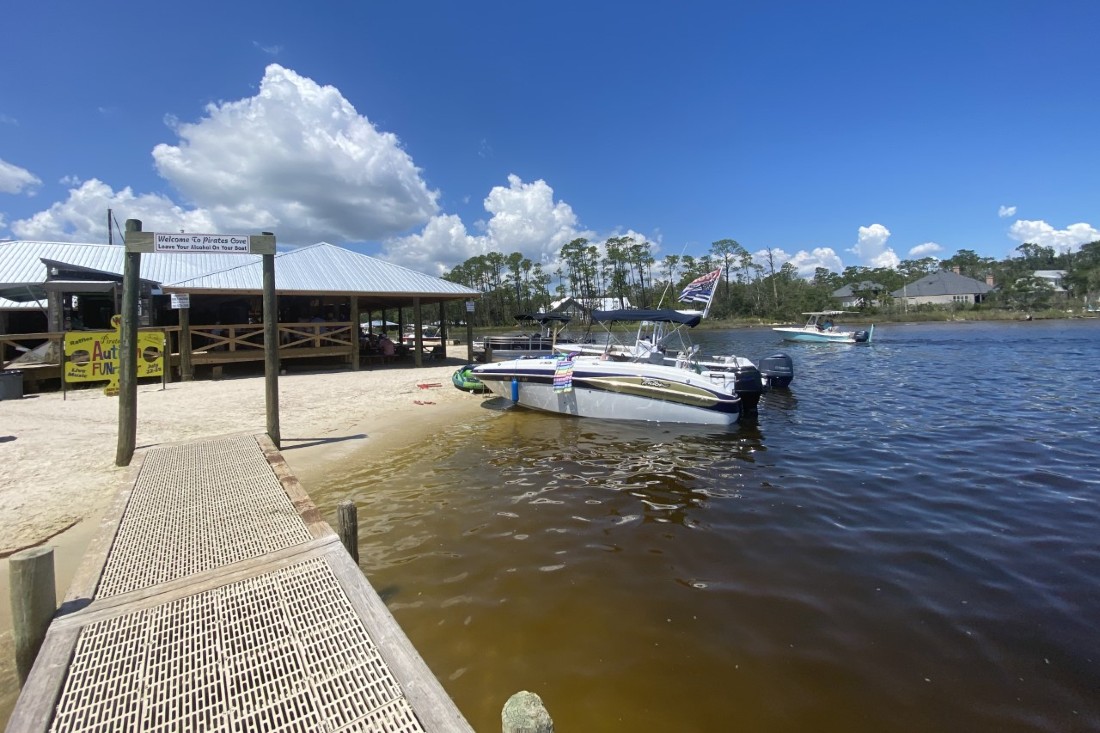 The Mueller family bought Pirate’s Cove in the waning weeks of 1956, and it has been a family affair since then. Current operators Paul and Karl Mueller took over in 1995, but according to Paul, the history of Pirate’s Cove stretches further back. “It was built by the Corps of Engineers, sometime around 1935, as housing for civilians working on the Intracoastal Waterway Project,” said Paul.

The origin of the name Pirate’s Cove adds to that colorful history. Admiral Rafael Semmes, a known Civil War privateer (pirate), sailed his ship into Robert’s Bayou to hide his booty from pursuers. The area was renamed Pirate’s Cove as its fame for piracy grew.

Today, Pirate’s Cove is a laid-back bar with live music on weekends. It’s known for its cheeseburgers, wood-fired pizzas, and dogs…lots of dogs. Two decks overlook the beach where canines and kids can play, and there’s a courtesy dock to pull up your boat. Get one of their bushwhackers; they sell, according to Paul, “more Mailbu than any other retailer in the U.S.” Time for boat drinks! 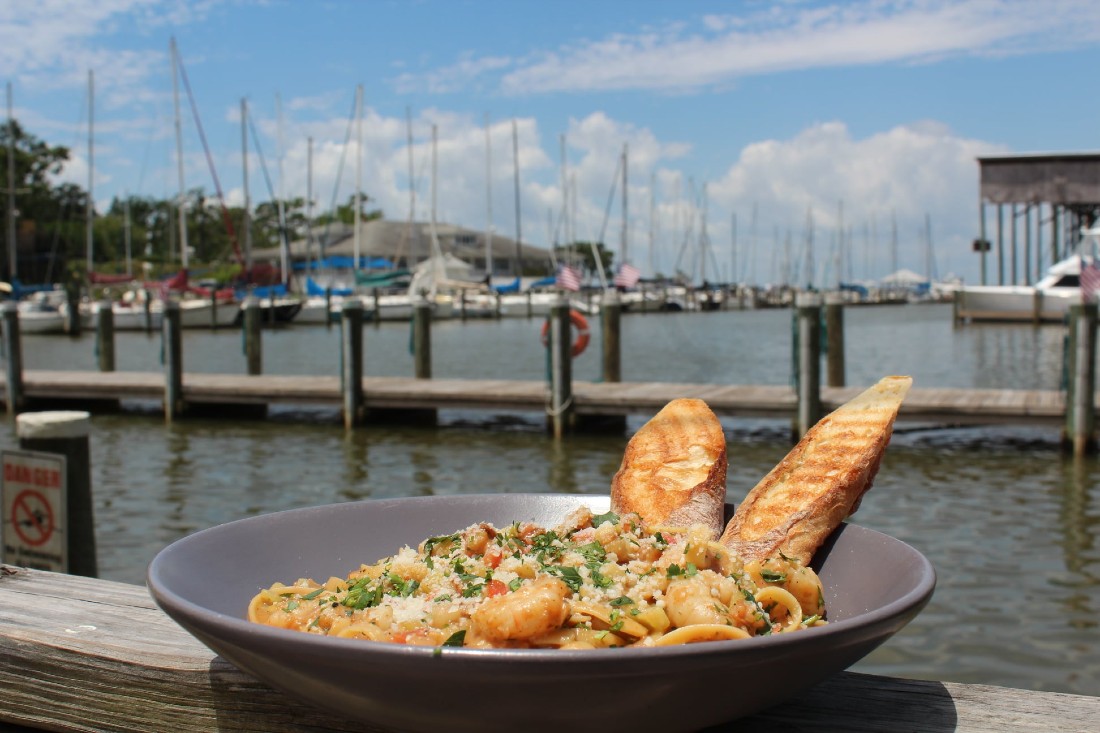 “Panini Pete,” a Fairhope native, set up shop at Sunset Pointe restaurant in Fly Creek Marina to deliver high-quality cocktails and farm-to-table food against the backdrop of Mobile Bay sunsets. Hungry boaters can enjoy Sunset Pointe’s tasty bights. “A bight can be simply a bend or curve in any geographical feature, usually a coast… at sunset, we encourage you to come get a bight.”

And the marina could not be more nautical-friendly. Family-owned and operated, Fly Creek Marina is tucked into a sheltered harbor on Mobile Bay, a short distance from downtown Fairhope, Alabama. The facility features wide slips, side-tie slips, and boat lifts. Long- and short-term accommodations are available for any docking needs.

Motor up and order one of their signature Sunset Lemonades—a refreshing mix of Tulemore Dew, St Germain, Pomm juice, and fresh lemon, all floated with ginger ale…yum!