The Healing Power of Gulf Therapy - 30A 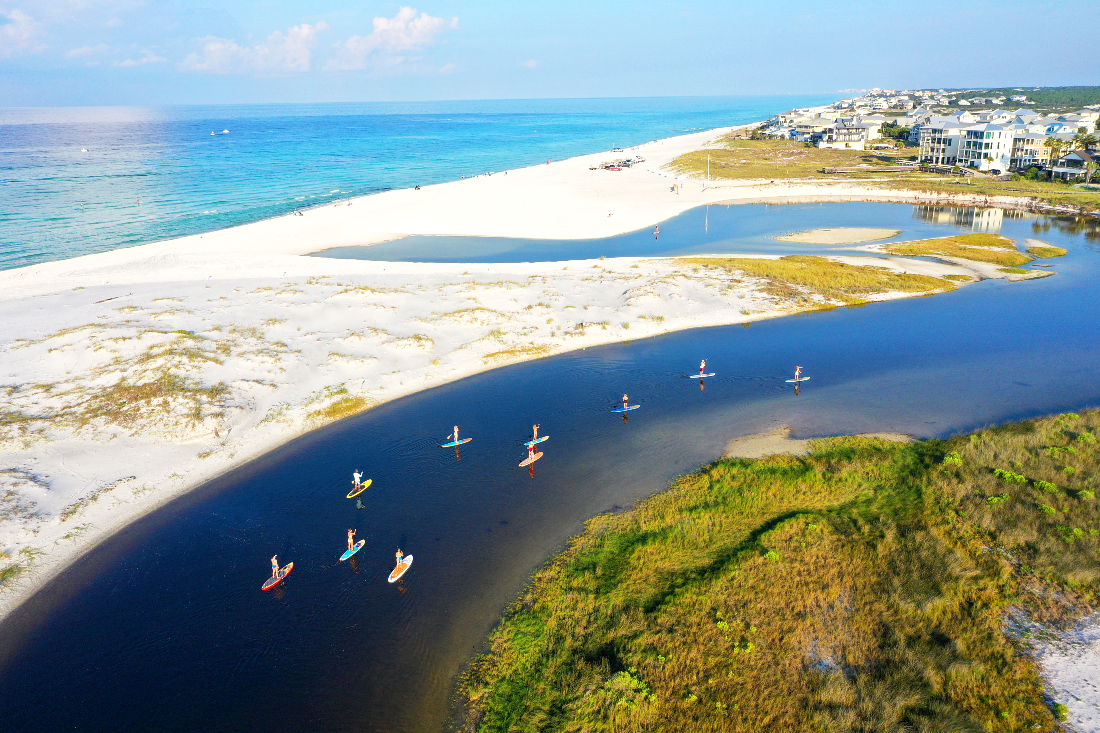 If you’re one to venture out on the water often, you’ve likely noticed there is a peculiar mindset about how vast your surroundings seem to be. A feeling that makes you feel small in relation to where you are. Suddenly, the clamoring thoughts, swelling to-do lists and inevitable stresses of daily life also shrink in comparison. However, if you pay close attention, you may discover something even greater begin to unfold.

There’s a kind of surrender that happens here, an acceptance that you’re part of something far bigger, as if you’re merely floating atop a world you can’t even see, with depths you can’t even begin to imagine.

On shore some half-mile away, life goes on as usual. All while though, you find yourself in another world, here, among the gentle, rolling waves and the emerald waters of the Gulf, lapping against your paddleboard. And for a brief yet powerful time, you have nowhere to be but right here.

As 6 a.m. comes around, the bell-like chimes of a sound called “Silk” blare from my iPhone speaker. It’s annoying, but it’s done the trick. I’m out of bed and, with the help of coffee, poised for the morning. As I drive west on Scenic Highway 30A, my YOLO board strapped above me, I pass only a handful of cars and all (two) of the lights are turning green on the spot. For those unfamiliar with the busy summer months down here in Santa Rosa Beach, Florida, these are two miracles each on their own – especially for a Friday. Cyndi Lauper’s “Time After Time” plays on the radio and I find myself thinking, so, this is what they play when the rest of the world is still asleep.

There is a pink and orange tint to the buildings I pass, and in spite of the rising sun, a slight sprinkle begins overhead. I wonder how this will affect our scheduled paddle, though the idea of a rainy morning on the water sounds sort of magical. On second thought, maybe that’s the haze of the 6 a.m. wake-up call talking.

I pull into Grayton Beach just as the rain stops. As I park at the boat launch, the colors, sounds and stillness of the morning become one, right before my eyes. The water is a mirror of the scene above it; silhouetted pines and a collection of clouds with rays of light beaming every which way.

I’m early so I sip my coffee and wait, listening to see which ‘80s mega-hit will grace the radio next. By the time I get settled, people are already arriving, one by one. They unload their equipment and within minutes, over a dozen paddleboards line the narrow wooden dock at the end of Grayton’s main street, Hotz Avenue. It’s an array that’s almost as diverse as the people now gathering, with all walks of life seemingly accounted for. And amidst the tune of friendly and sleepy good mornings stands the reason we’re all here: Amanda Abbott. 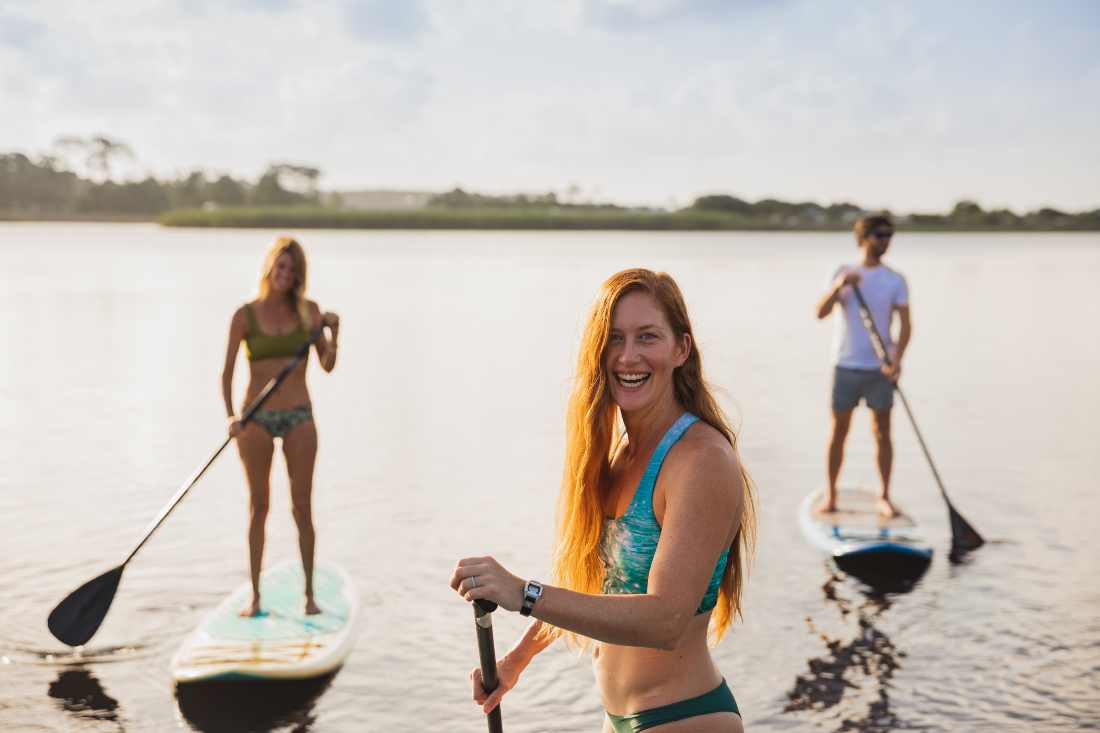 With long, red hair flowing effortlessly past her shoulders, and a turquoise swimsuit not far from the color of the water we’re about to embark on, she exudes the poise of a person ready to take on the world, coupled with the laid-back yet adventurous spirit of someone who’s spent the majority of her days soaking up life by the water. Both of which are exactly what Amanda is all about. Having called this stretch of beach home on and off for over 30 years, Amanda told me, “The water is like my sanctuary. It’s where I feel the happiest and calm.”

As we make our way around the bend where Dune Lake connects to the Gulf of Mexico, we arrive at the sugar-white sands of Grayton Beach, where a small handful of fishing charters have already begun their day, peppering the horizon. At the end of the pier, a yellow flag warns of medium hazards and moderate surf conditions, though the crystal clear water of the barely-present waves tells another story. Without hesitation (at least none that show), the group paddles out toward an undesignated spot on the water. This is about the time any reminders of my dawn wake-up call evade me completely, gone with the now-distant rain clouds. I start to forget what time, or even day, it is, which proves to be a popular opinion amongst my peers.

From above, we must look like a cluster of colors and shapes dotting a sea of emerald green with no rhyme or reason. Here on the surface of the water, strangers become friends; some swimming and splashing, some deep in conversation. Some are on the hunt for exotic marine life, while others leisurely drape themselves over their boards, eyes serene, simply taking it all in. The common denominator being unencumbered smiles as wide and boundless as the ocean beneath.

This is where the “therapy” part of Gulf Therapy comes in, and yes, it’s as simple as that. As local and long-time attendee Stacie Boudreaux said, “It’s where the magic happens.” This is a foolproof recipe of saltwater, sun, and community that paves the way for so much more.

“It’s almost become a pay-it-forward thing,” said Abbott, who normally brings anywhere from 3 to 43 paddlers out at a time.

Another veteran of the group, Joel Mitchell explained, “The door opens for that kind of stuff because there’s no pretense at all. There are no showy vibes. Everyone’s just ‘here.’” 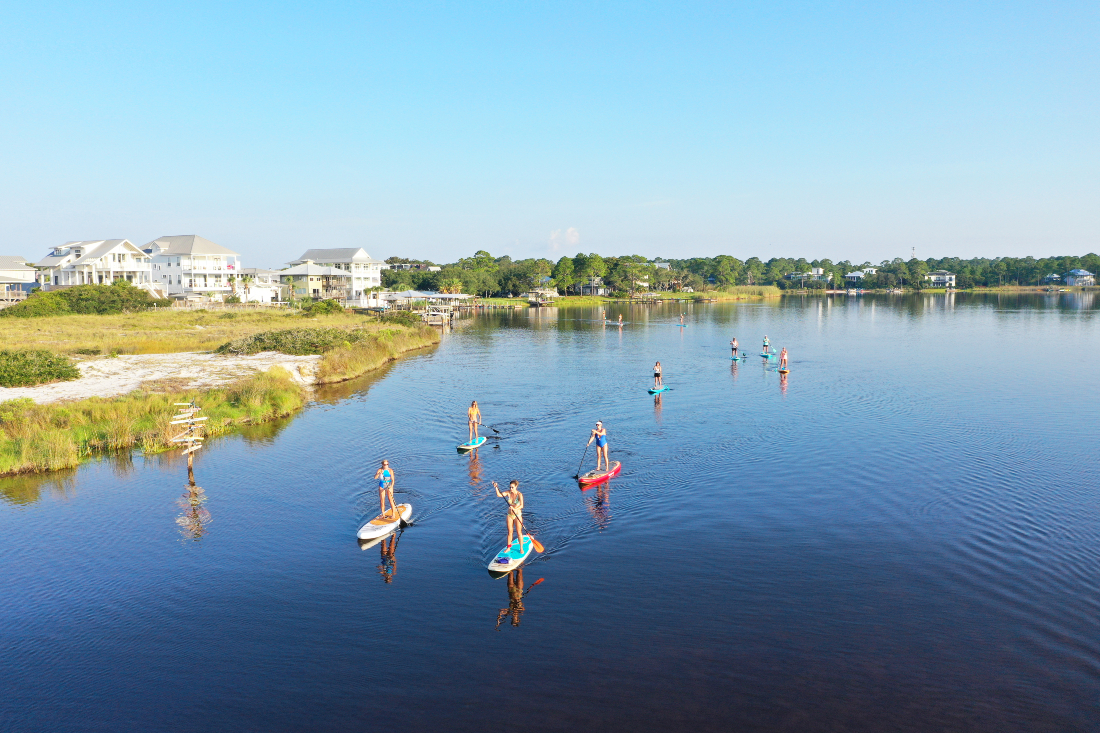 When you see the Gulf Therapy Founder in her element, out on the water or crushing 10-plus-hour workdays with her brother’s real estate firm, you would never know that just years prior held some of the darkest days she would ever know. Times weighed heavy by pain, shame, and guilt made hope dim for this woman who now radiates with unending positivity. The saving grace, just as it is now, the water became her solace. “It’s like she gets to sprinkle this healing dust on people,” said Boudreaux, who can probably count the Gulf Therapy days she’s missed on a single hand.

One might ask what Gulf Therapy really is, but the simple truth is that it’s whatever you need it to be.

“You just have these natural, real, genuine conversations on the water,” explained Abbott. “And then you can see this release start to happen. That’s when I’m just like, yes, this really does work for other people. This didn’t just work for me.”

Amanda said the hardships she went through have no doubt helped mould her into the person she is today. “During my trauma, I would go out on the water to heal. And somewhere along the way, it became something I wanted to do for other people.” 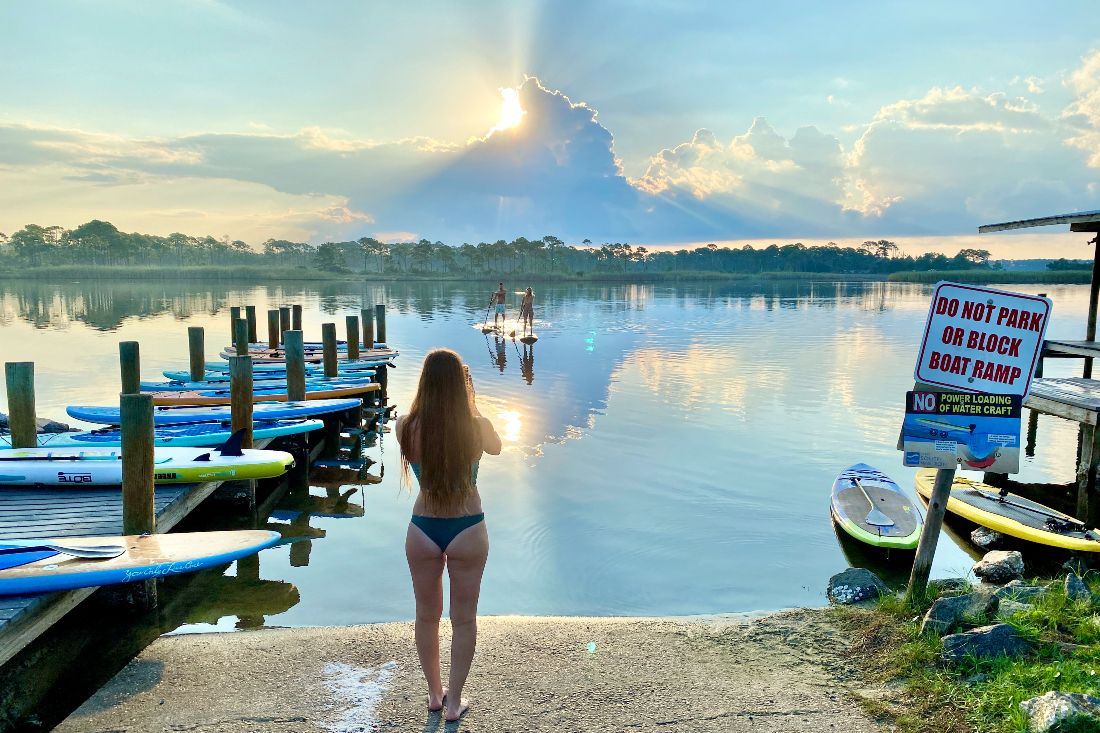 This led her to organize a Paddle for Prevention event to help raise awareness around mental illness. “Being out on the water like that was something people really connected with,” Amanda told me. Afterward, the desire to recreate that on a smaller, more intimate scale led her to launch Gulf Therapy in 2017. And in just a few years, it grew organically to become so much more than she ever imagined.

“We did the group for a couple of years and then, people just kept trying to give me money,” she told me, with a humble laugh. “They were like, we love what you’re doing. Can we donate?”

With the help of continued generosity and a partnership with Adventure 30A, who provides the board rentals, Amanda eventually turned Gulf Therapy into the non-profit it is today. She shared with me how grateful she is for the opportunity to be able to give back to the community, not just on the water, but off the water.

“A lot of times when you have those one-on-one conversations that naturally unfold on the water,” she said. “There are multiple incidences where you get the sense of those people that need a little more support and might be afraid to ask for it. When I see where there’s that extra layer needed, I help align them with local therapists, massage therapists, or even a yoga session. Whatever is needed.” 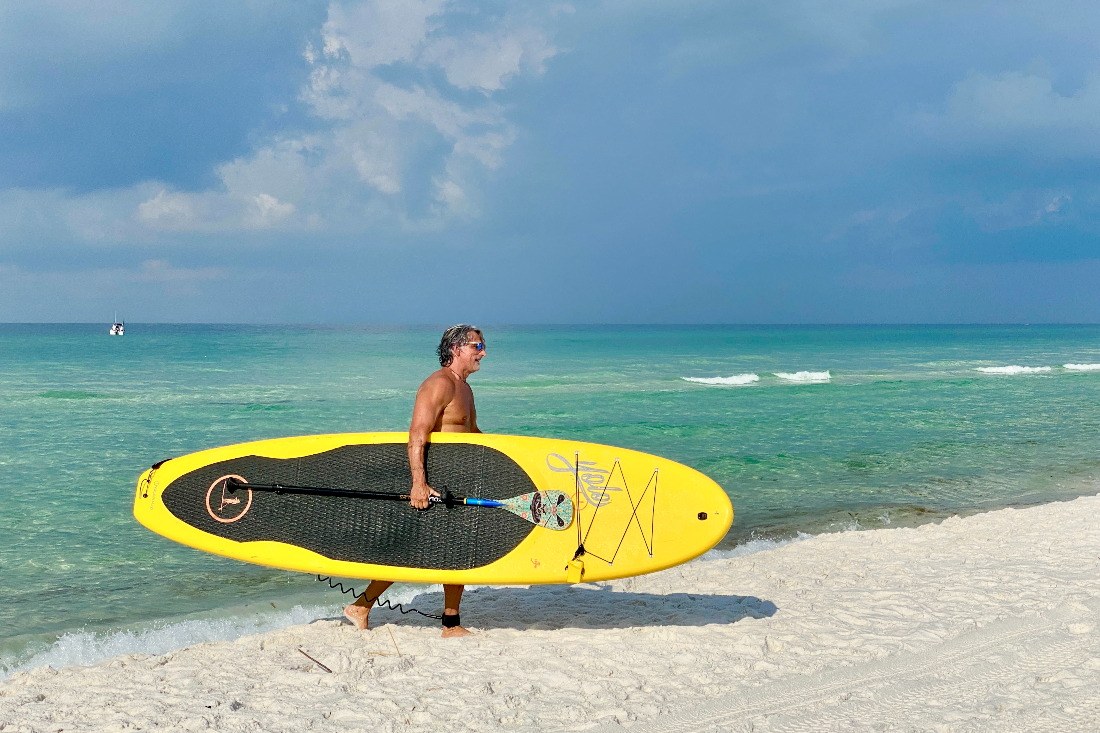 One such person who has been on the receiving end of Gulf Therapy’s healing power is Julie Spears. After losing her son back in 2016, Julie eventually heeded the call and found not only her own healing on the water but also herself.

“It was a very safe place,” she recalled her first time. “I didn’t have to talk. There was no pressure.” Eventually, it grew to mean even more. “It was a place I didn’t have to hide what I’d been through.”

In no time, paddleboarding became her outlet. “When I’m out on the water, I just feel so close to God,” said Spears. “So close to my son.”

If she could sum Gulf Therapy into just two words, it would be: life-changing. Spears said it was about the community of people also there. “The people I met through Gulf Therapy were really what changed me,” she said.

Looking at the faces all around me, sunlit and glistening with salt water, I could see what she meant. I found myself engulfed with a feeling of surrender, this time, out of unspoken respect and understanding for my peers and the long-winded journeys that had brought all of us to this very moment. The dark days have paved the way for brighter ones.

“Early in the morning when the sun’s coming up, the animals are coming alive and the creatures of the water are swimming with us, you just feel one with the earth,” said Abbott. “You are able to strip down and just take in the environment. Even heal. That kind of thing happens on the water, these beautiful mornings where you’re just drifting away.”