Gumbo - A Coastal Classic With Deep Roots - 30A 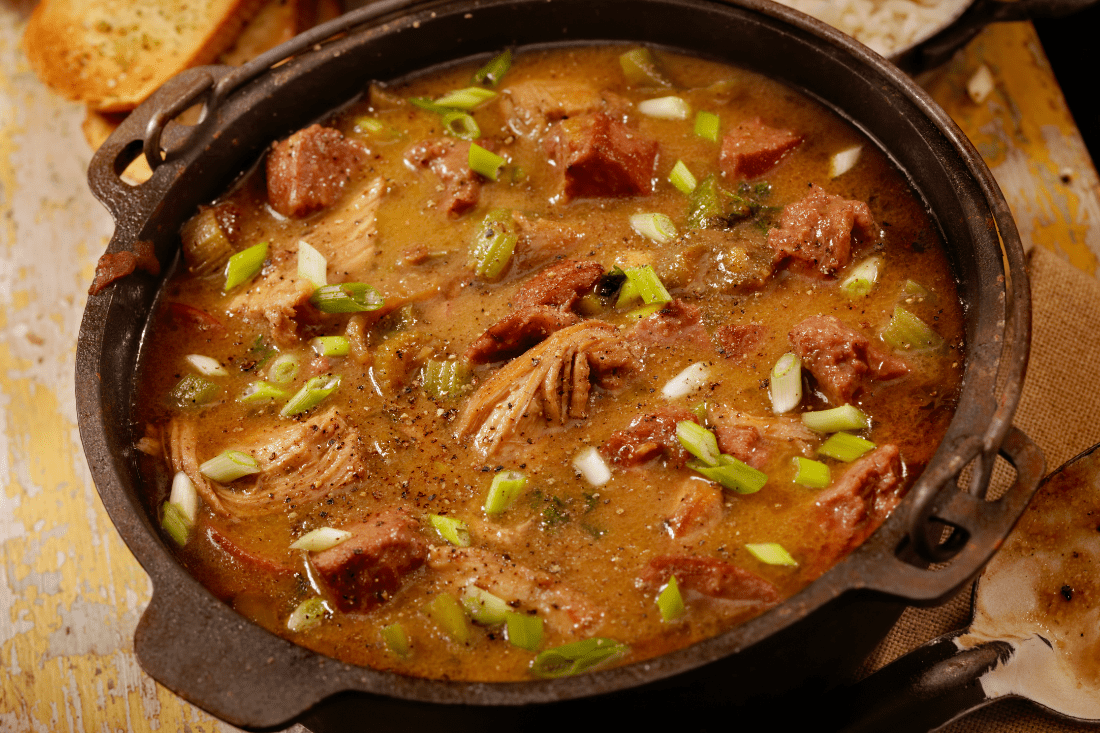 Perhaps no single dish has enraptured the Gulf Coast more than gumbo. It’s so much more than a soup – it’s a major cultural touchstone of coastal cuisine. While it’s definitely a staple of the entire region, it’s in no way hyperbolic to say it practically defines Louisiana. In fact, gumbo is the official dish of the state, first becoming popular in 18th century Louisiana.

I moved to Louisiana, from suburban Atlanta, the summer before 7th grade. We’d been strict vegetarians while my hippie father attended chiropractic school. However, after the move, we decided to immerse ourselves in local cuisines and cultures, in all their zesty iterations, and our culinary confines diversified to include meat.

Our newfound flavors included revelatory piquant and tangy sauces at crawfish boils with my basketball teammate friends on the island, mild but resonant boudin — a rice sausage I immediately adored — and ever abundant varieties of gumbo.

We lived on Grand Lake Island, a beautiful, small community on the far less-populated Lake Charles side of the boot-shaped state. The locals always referred to it as Big Lake — not only the place, but our school and sports teams. It was named for the brackish lake, a short walking distance from our house. We lived year-round at the edge of the mostly weekend-house tourist area, popular in the warm seasons. 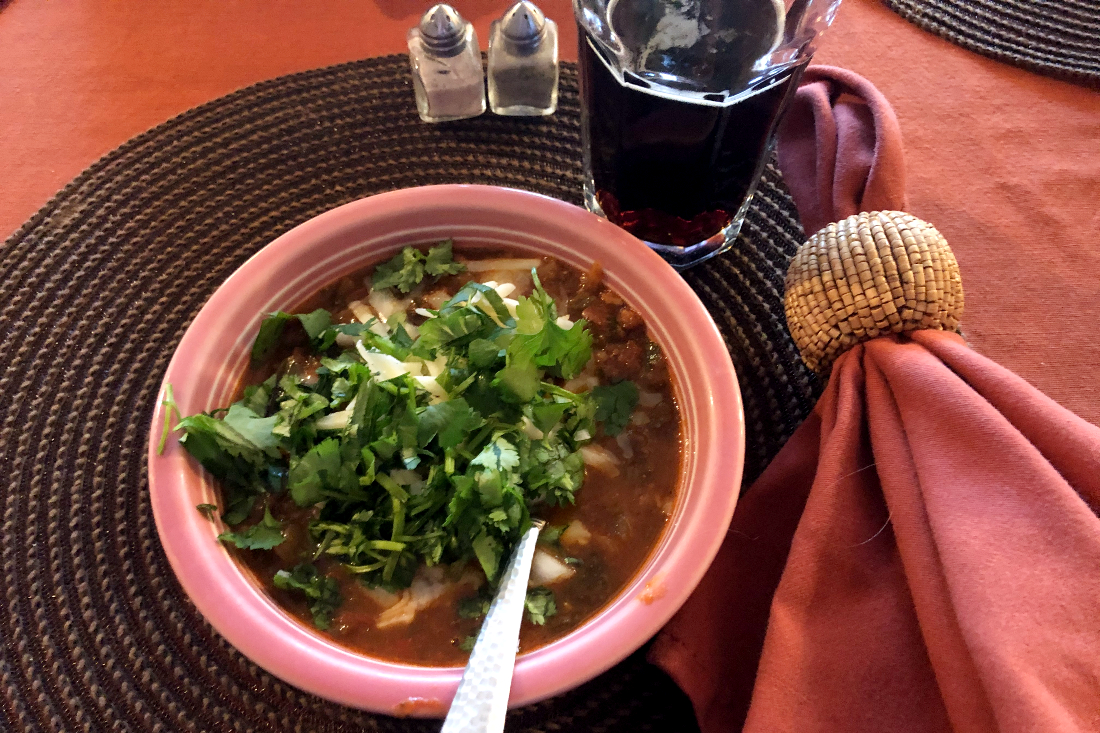 After living in landlocked Atlanta, having a small strip of beach that we could walk to was plenty for my siblings and I. We often frolicked in the crab- and shrimp-filled water, as fishermen frequented the long wooden public pier. Primitive crabbing with only a piece of white string, a long nail, a hunk of raw chicken, and a net was a common pastime and major food source. Off in the distance from where we swam, shrimp boats were almost always visible.

Seafood gumbo may taste of the deep ocean to you, but only of Big Lake to this very old boy.

At Fontaine’s in Atlanta’s venerable Virginia Highland neighborhood, talented young photographer LVictory is clicking away at the daily served gumbo, while I slowly sip a can of cold Classic City Lager on the heated patio.

We both sample it: It tastes dark and earthy as well as plainly of saltwater, we surmise. She likes it more than I, a bit of a Cajun and Creole food snob from living down on the bayou.

They aren’t interchangeable, by the way. Cajuns are historically the country folks, ancestrally from the Acadia region of Canada. They were French Canadians. They mostly lived off the land and cooked everything they caught each day. There’s some contentiousness about what is most authentic, but it just stems from what side of Louisiana the variety was connected to when it was prepared for you. 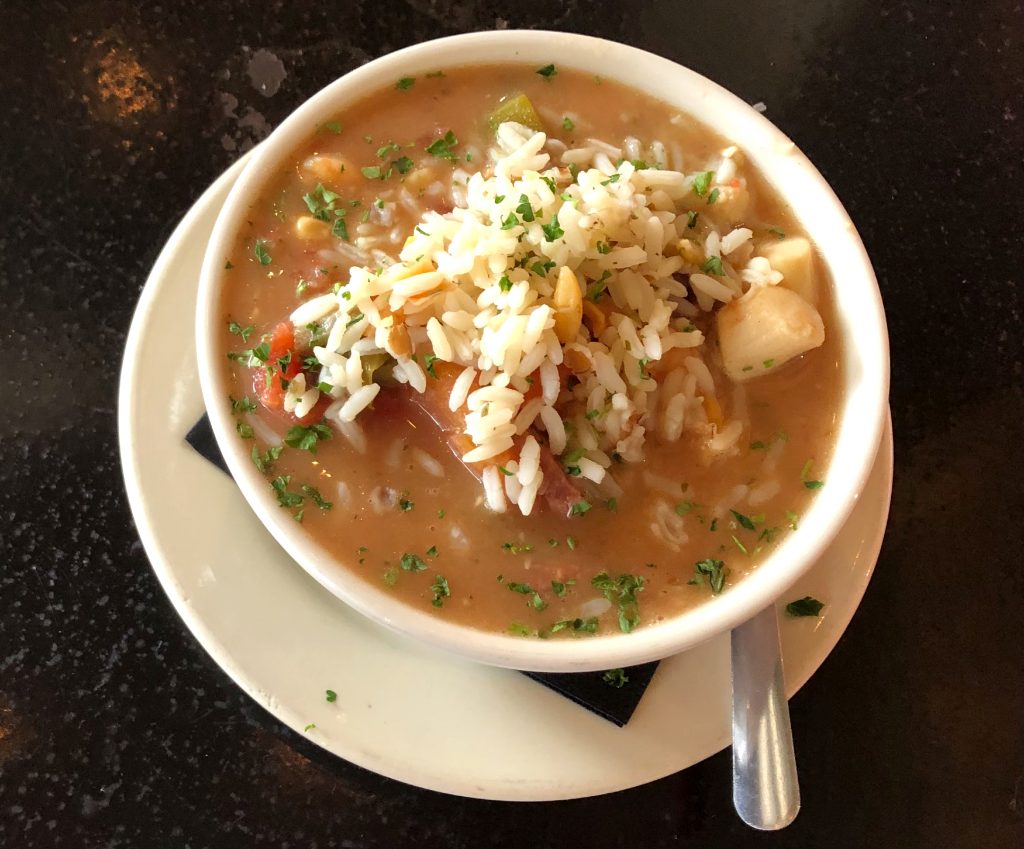 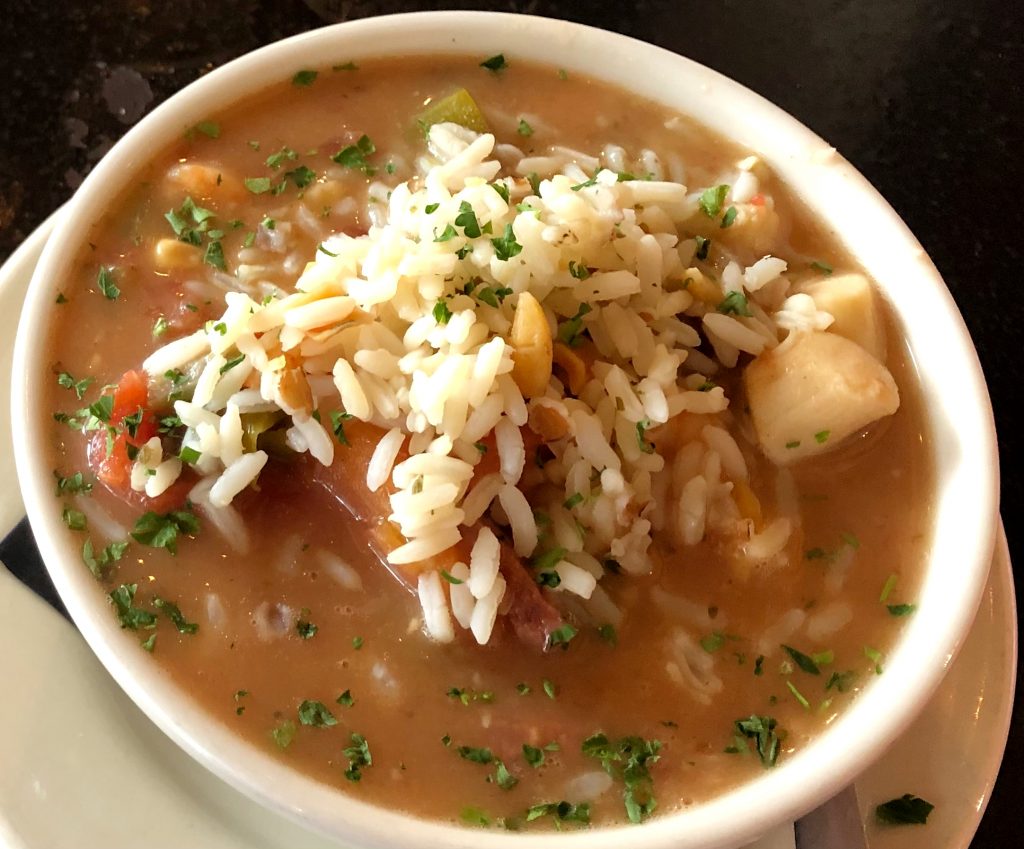 All gumbos seem to use “the trinity” of celery, onions, and bell peppers.

I flip into a completely different perspective on gumbo at mom’s later in the week, where she and my stepdad have grown their own vegetables for years. She prepares me two servings of gumbo z’herbs: a no-meat or seafood version loaded with leafy greens, which I’d heard about from chef Rob Vance (no relation).

It excites with every bite, and I feel healthy. There’s something about familial love at the very essence of the gumbo experience.

Chef Vance first discovered the true world of, and myriad variations on gumbo, while becoming an autodidact disciple of “The Creole Kitchen Cook Book.” The author of that fabled compendium hung around kitchens of locals asking the right questions long enough, and recording answers, to transfer the long oral tradition of passing honed technique details from generation to generation, down through the decades. Finally, it was all there in print for us all.

Already established as a hard worker in the industry, chef Vance took the valuable lessons taught therein to the ribald Bourbon Street in the New Orleans French Quarter, where for four years he was executive chef of Le Bayou and also assistant culinary director for their parent company, Creole Cuisine.

He left to become the culinary director of beloved breakfast and brunch institution, The Ruby Slipper Café. There he supervised the dining empire as it expanded beyond the bayou. Next, he was the general manager of Lager’s International Ale House in nearby Metairie, Louisiana, a food and draft beer emporium. He braved the French Quarter again for two years as operations manager of Mahony’s Original Po-Boys & Seafood, but due to the global pandemic deeply impacting tourist district business, the location is temporarily closed. He’s contemplating relocating to western Florida to run the right restaurant, in the economically better off region.

“Gumbo is an extremely difficult thing to get properly right,” said Vance. “Roux goes through several stages. It’s equal parts a lipid and flour. Some use okra as a thickening agent. The origin of the word (gumbo) is from the word for okra.”

“My NOLA dinner spots had gumbos every day: chicken and andouille sausage or seafood,” said chef Vance. “Seafood was crab, a white fish of some sort, usually catfish, and it’s going to have small Gulf shrimp, and then oysters, put in last, right before it gets served.”

“Do you love gumbo?” I wondered after he’d clearly been around it thousands of times.

So what’s the secret to authentic gumbo?

“The key is cooking your roux right and balancing your thickener,” said Chef Andrew Paparella, a native of San Antonio now living along Florida’s Scenic Highway 30A.

Certified master chef Tom Catherall – another 30A resident – shared his insights as well:

“Africans like spice, so hot peppers ended up in there,” said Catherall. “One pot over fire. It got wiped but never got washed. The flavor stayed in the pot. Something caught that day, and they maybe only had one iron pot. The culture of one giant pot.” 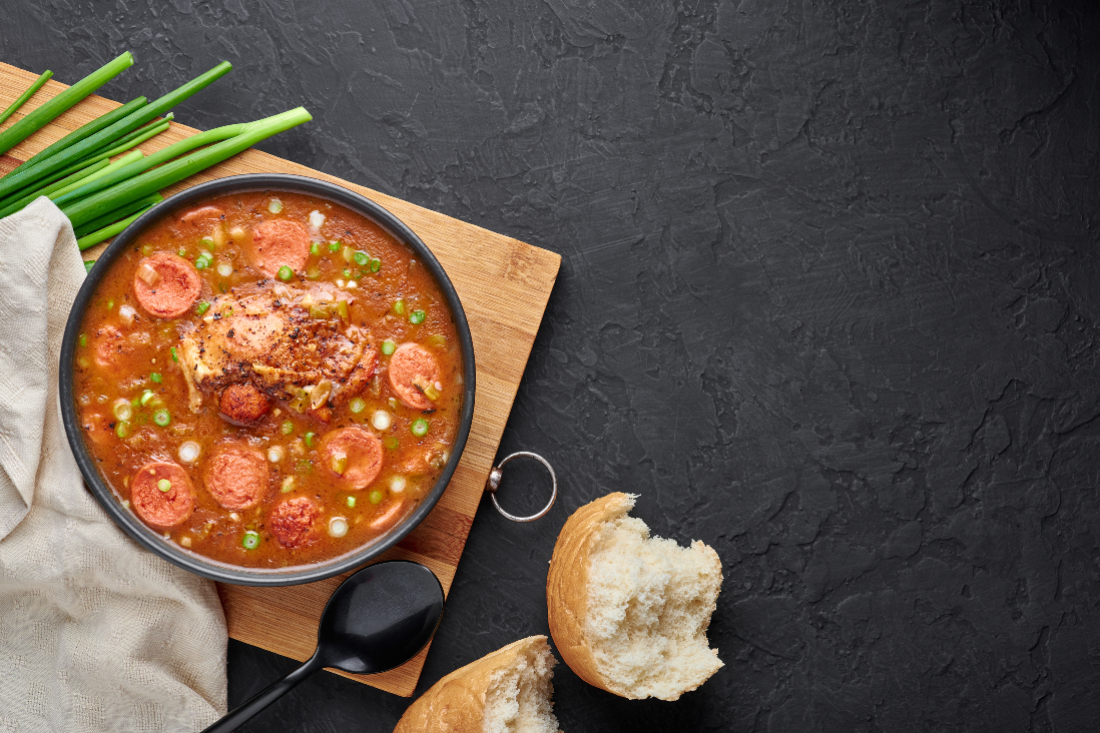 First of all, try not to think of “Gumbo” as a recipe. Instead, think of gumbo as a spell. A creation formed from intent, technique, and the will of the creator, in conjunction with the history and traditions of those creators that came before. What you bring is what you get. I will provide a recipe, but it will only be as good as the creator allows it to be through their judicious application of love, will, intent, and the proper ingredients.**

The first thing to know is, you do not make a little pot of gumbo. Ever.

You will be making at least 4 quarts at a time. Probably more. Most definitely more after you learn the unbridled joy that this creation brings to the uninitiated.

To start, you must make the “Roux.” This is where the magic comes in. You must never lose focus on the roux. The roux must be your only concern. Forget taking a break, quieting the children, or feeding the dog during this process. The roux is your one job. Got it?

You will need a large heavy-bottomed pot — at least a 10-quart pot for this recipe. Place the pot over medium heat and add the butter. After the butter has melted, add the flour, and stir to combine. This will form a loose paste. This is good.

Now, the magic happens. With all your focus on the roux, continue stirring. Preferably with your grandmother’s wooden spoon. Trust me, it makes a difference.

The goal here is to “toast” the flour. This requires time and attention, so stop looking and worrying about anything else. Focus. You will notice that as you stir, the roux begins to darken and to change. As the color gets darker, the viscosity changes, as does the smell. Remember, smell is your friend here. It will go from a white paste to a beige paste to a reddish-brown paste to a brick brown paste, all rather quickly.

Allow this while stirring. As it reaches the “Brick Brown’’ stage, you should notice that it smells a bit like popcorn. This is a good thing. It is also the time to make sure that your Mis en Place has been put together. What’s that? You didn’t dice all of the vegetables, slice the andouille, and gather all of the rest of the ingredients together? If not that is poor planning and maybe a lack of intent. You don’t want to burn the roux.

Should this not be the case and you have properly prepared, well, good on you. Now let’s get going on this. The color that you are looking for when making gumbo is “brick brown.” It will be a loose roux, but not greasy. It will smell like caramelized popcorn. At this point, add the diced vegetables and continue stirring. Allow the onions to cook through and add the chicken stock. Stir it up. Next, place your largest cast iron pan over high heat and add two tablespoons of oil to this pan. Season the chicken thighs with salt and pepper and add them, skin side down, to the pan. Do not crowd the pan. Cook the chicken in batches. All you need to do is brown the chicken on both sides. After you have removed the last of the chicken, add the sliced Andouille to the same pan and brown it.

At this point, you should be tasting the gumbo on a regular basis. Adjusting the salt, and thinking about the accolades that you are surely due for this amazing creation. The gumbo should simmer for at least two hours. At that time, remove the chicken thighs. Strip and chop the meat and skin, and add it back to the pot.

Give your masterpiece a final taste, bask in your triumph, and contemplate the next question…

Rice or Potato Salad? That one’s on you. 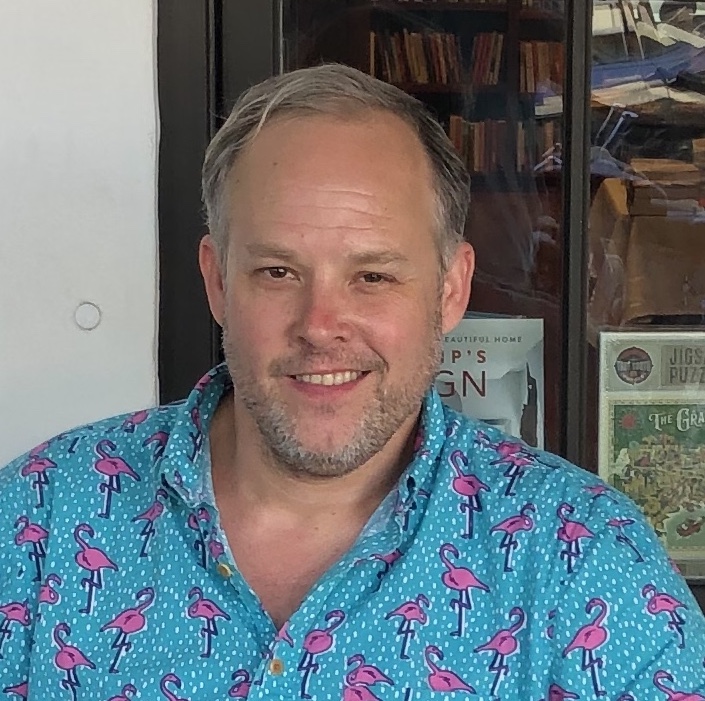 Han Vance is an award-winning writer (author-journalist-poet-blogger) and brand ambassador based out of Atlanta, best known for California travel narrative “Golden State Misadventures” and his immersion reporting on Georgia football. You can follow Han on Twitter @hanvance, IG: @hanishvance or visit his website: www.hanvance.com.