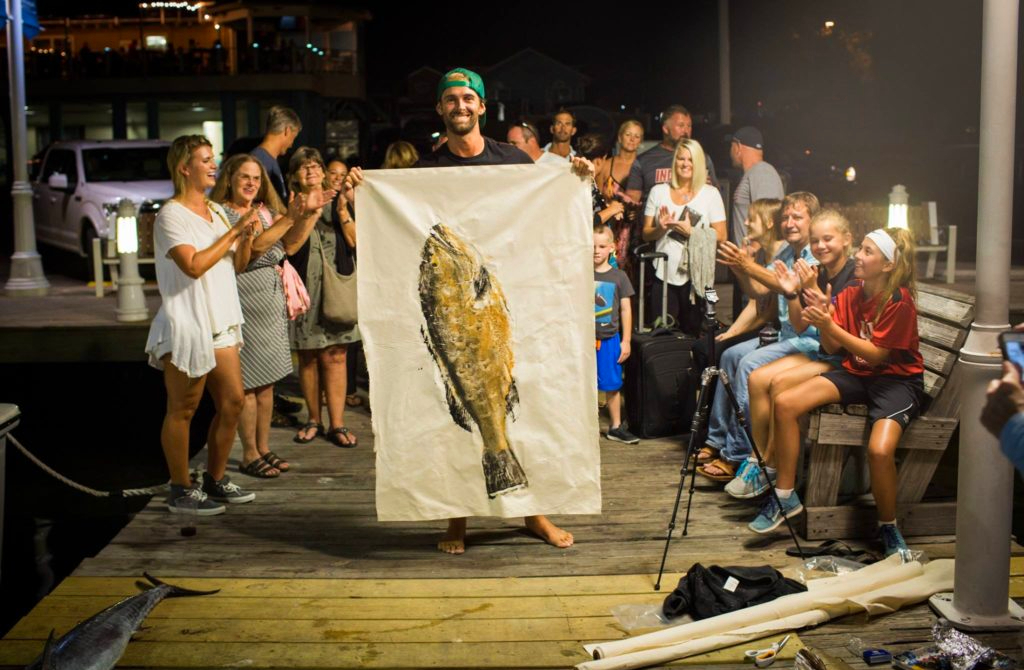 Take a drive down any coastal highway and you might find it difficult not to look out over the watery landscape passing before you. I have often done this and found myself daydreaming about that next time I’ll spend on the water fishing, or in the water swimming or free-diving. Some people might not give a second thought to what lies beneath our shimmery seas but stop for a moment, close your eyes, and imagine that other-worldly realm where a cornucopia of unusual creatures, mammals, and beautiful fish live out their destinies. Every single creature in our oceans plays a vital role in the ecology of our waters. For thousands of years, humans have found sustenance in the ocean’s abundance. But now, the fish taken from our waters not only provide us with a food source but something a bit unexpected — art.

Man has long been fascinated with the sea, mesmerized and challenged by the stunning specimens that live there. Stories of legend have been written, and many a wall in human dwellings bear the fruit of the hard-won battles between fish and fisherman. Over the years humans have kept records of their catches. The Japanese used a traditional method dating back to the mid-1800s called “Gyotaku” to make actual prints of the fish they brought into port; this being their process of recording and documenting the nature of the species by using inks and rice paper. These fine impressions became lasting images that still exist today. 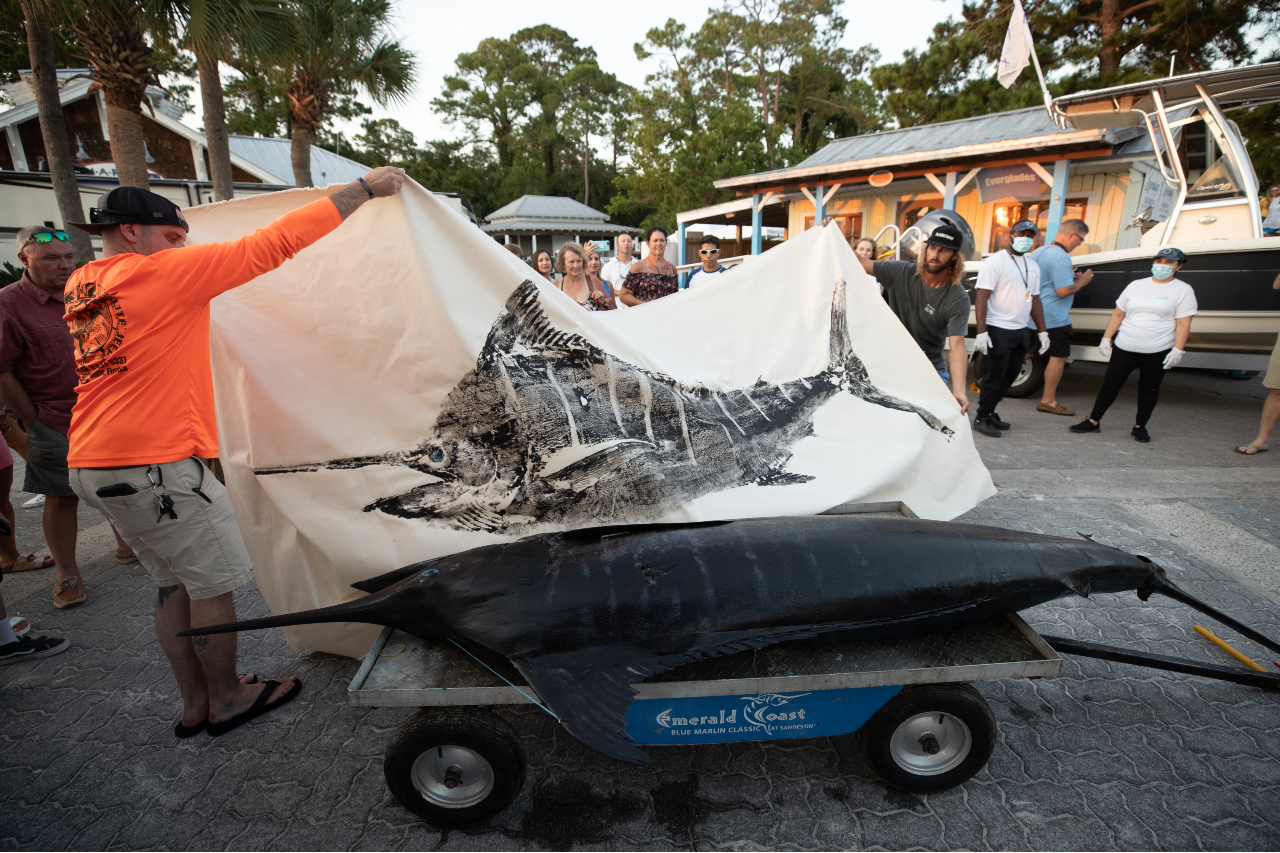 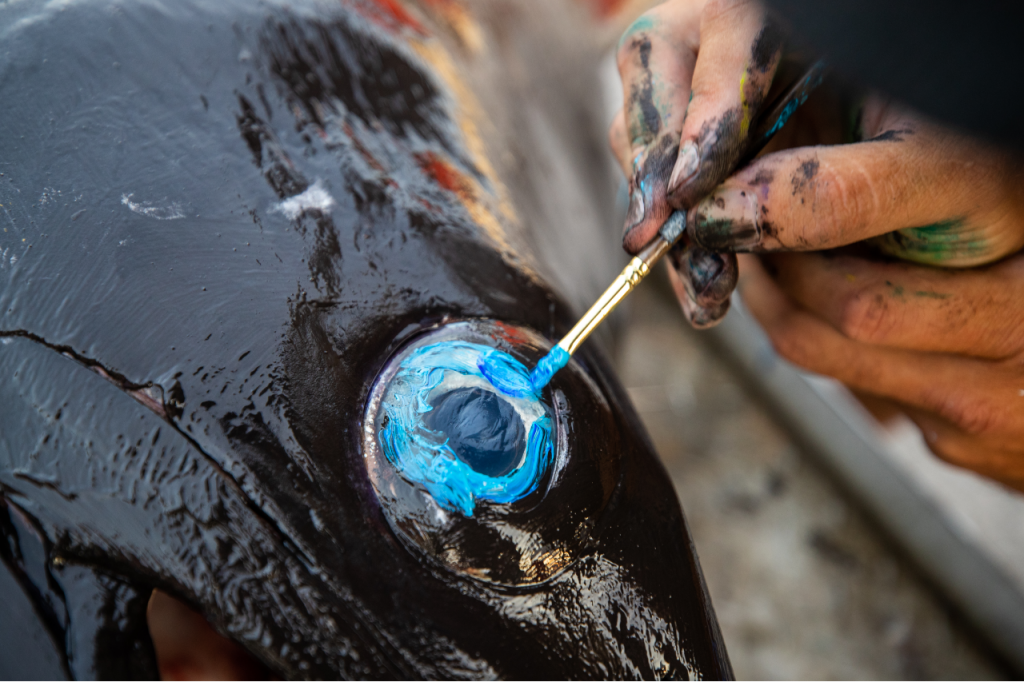 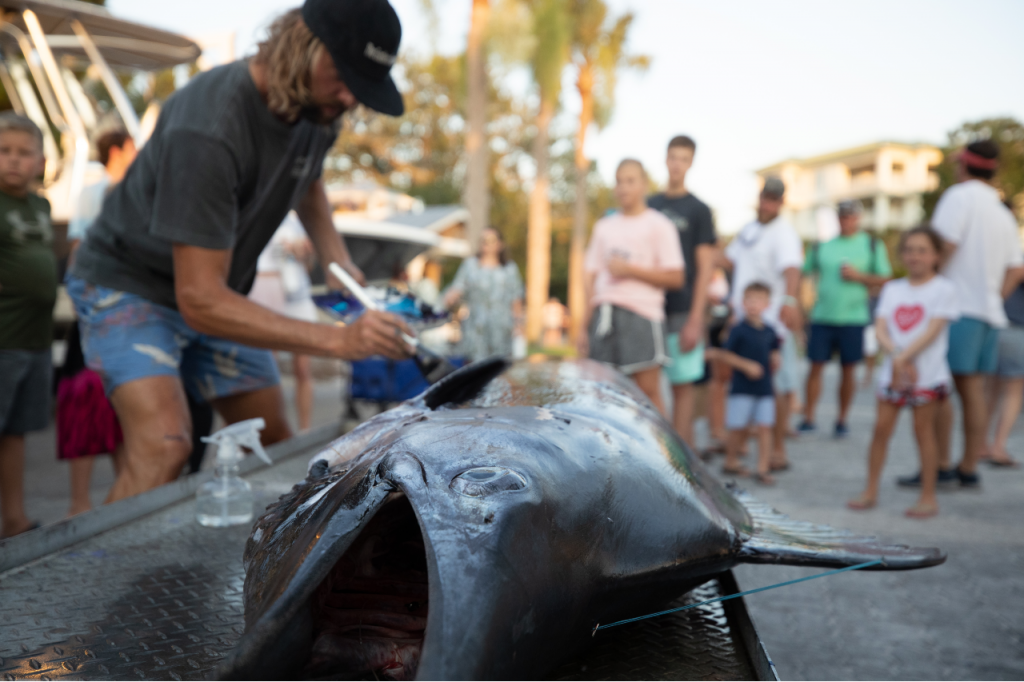 Gyotaku — “gyo” meaning fish and “taku” meaning “rubbing” — is still practiced and has evolved beyond Japan to inspire a modern art form. Enter Harley Van Hyning, a beach born waterman and surfer turned artist. Harley was born on Eglin Air Force Base in Western Florida and now resides permanently in Destin. Harley has both art and a love of the water deep in his heart. As a child, he was artistically influenced by his mother Anna, a London born painter educated at The British Royal Academy. “Growing up I was always seeing my mother paint. I think I absorbed that like a sponge and I just took to it naturally.” After endless hours of his childhood spent Pompano fishing with his beloved step-father Randy, he began surfing at thirteen and his passion for the gulf and its inhabitants was sealed. “There’s a connection I have with the sea that is really special. In high school, I really liked James D. Audobon and Salvador Dali.” Harley says throughout his formative years Anna and Randy nurtured and encouraged his organic love of the natural world and different forms of art. He tells me, “If it wasn’t for both him and my mother, I wouldn’t be who I am today.” Harley thought briefly of attending The Savannah College of Art and Design. Instead, after graduating from Fort Walton Beach High School he went on to study advertising and marketing at The University of West Florida.

The Japanese considered this not only a record of their catches but a way to capture the life essence and remain true to the detail of the lifeforms — an art of respect. Today Harley practices a more non-traditional form of Gyotaku to lovingly and painstakingly produce stunning works of art. Where traditional or raw Gyotaku uses Sumi black inks and rice paper, Harley’s works have grown outside of the box while still honoring the purpose of the early processes. “I use acrylics and color, and often do additional detail work to the print to capture the full beauty of that life form in its existence.”

“I have a great deal of respect for the creatures of the sea, and I get to honor that life form.” 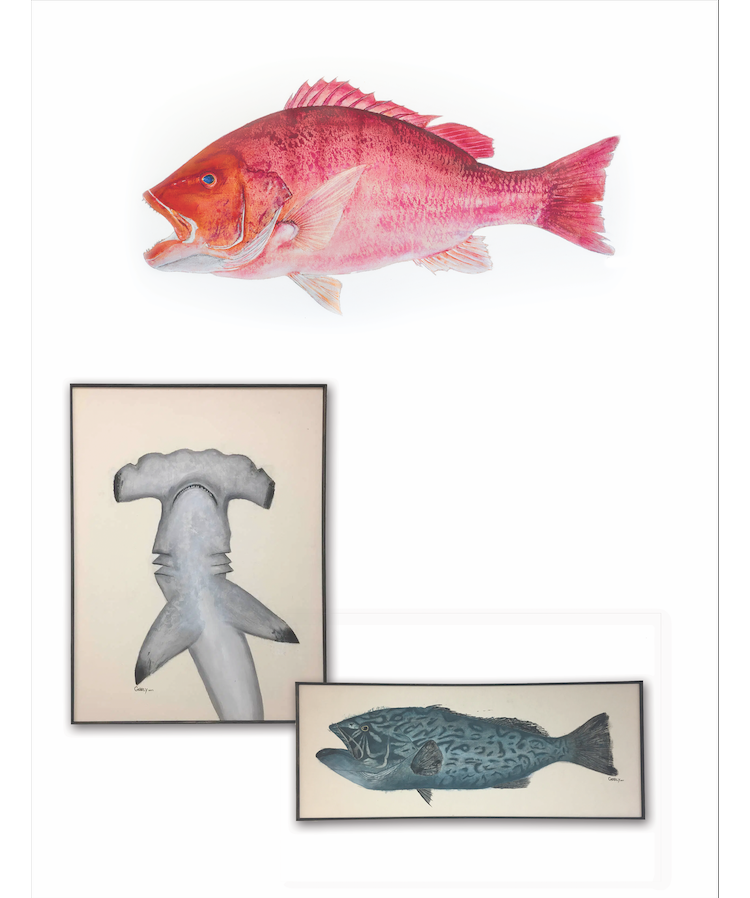 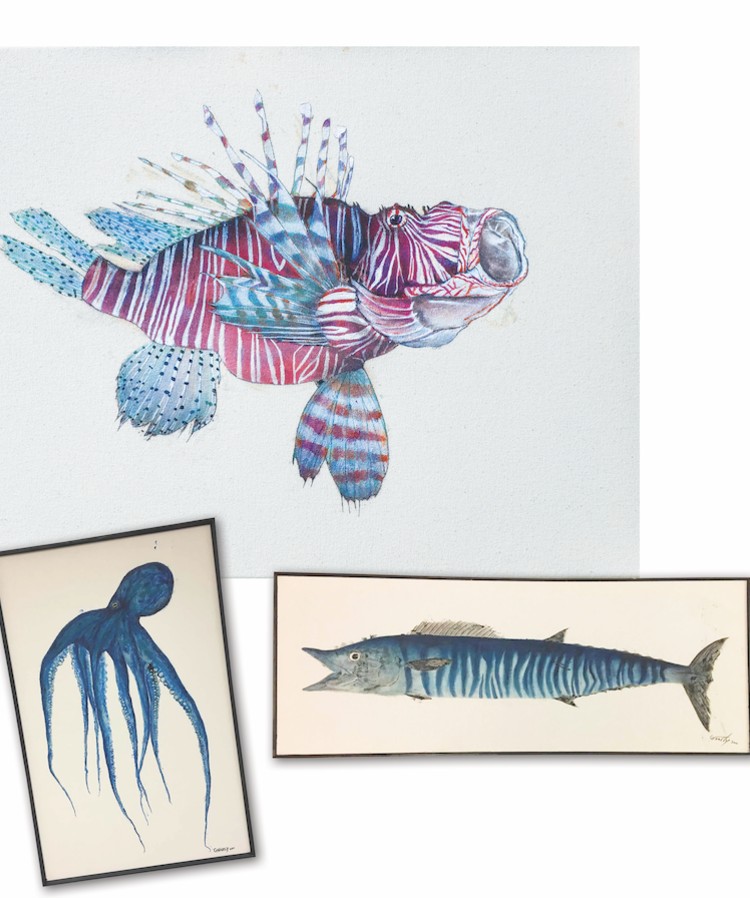 This once-popular method of “nature printing” has diminished over time, but true traditional artists still exist. One such man is Japanese painter Dwight Wang of California, an artist whom Harley holds in high regard. Other fish painters are appearing on the art scene as well, but Harley wants people to know that the art form is not one of simplicity. It has taken him lifelong study and learning of the different species of fish — their appearance, their identities, their origins. These are all factors he uses when creating each of his works and commissions. “There are different weights of the canvas depending on scale size and the medium used. Using linens, that takes practice and time. There is a discipline in knowing your paints in realism.”

Harley’s art shows more than technical prowess. His passion for nature, and life in general, is seen in his work. He says that it is a deeply spiritual thing. What’s happening with him in his life or with the world is channeled into his painting. He feels there is a need to nurture and protect his energy, keeping his mind, his soul on a positive flow because all of that translates into what he is painting.

Whether it be Red Snapper, Cobia, Blue Marlin, Triggerfish, or Grouper he is recording, this is an artist who deeply values the life that once was in existence. Harley plans to take Gyotaku to a whole new realm with just his imagination. As an artist, he says there is more inside him that’s yet to be revealed. He shares that he had a recent request from a client to paint an Amberjack using the colors of the Queen Triggerfish. This extension of the art form is something on which Harley thrives, saying it is always challenging, exciting, and fun. “Gyotaku is an art form that brings both my love for art and the natural world together.” The biggest positive influence in his life is his parents whom he refers to as, “the best humans I know, having been constant examples of love, compassion, loyalty, and respect.” 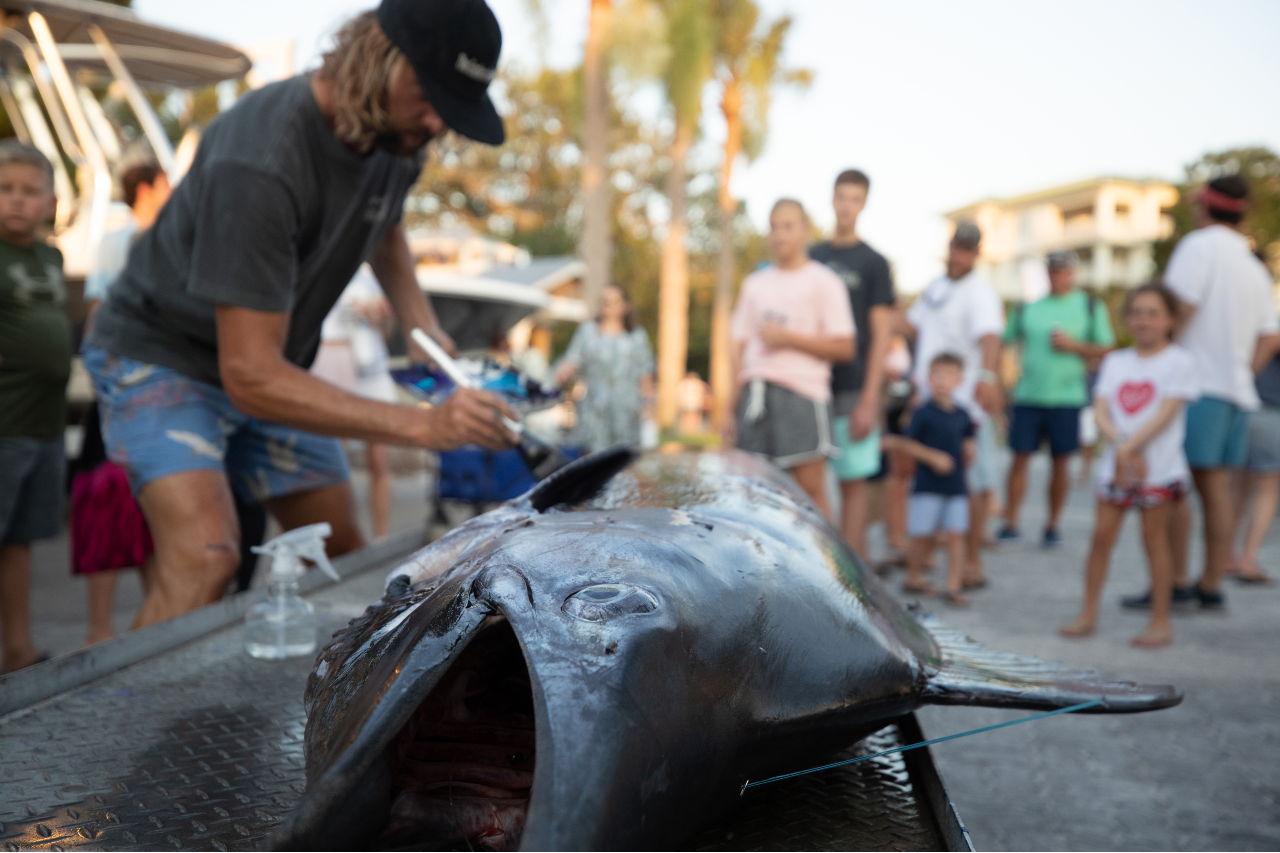 Harley’s future looks as bright as his works. He now has a small studio in Destin where he works by appointment. His dream is to one day have “a full-on gallery that would be an experience for anyone who loves the creatures of the sea or art.”

See more of Harley Van Hyning’s work at GnarlyFishPrints.com or follow him on Facebook at Gnarly Fish Prints.

SUSAN GUNN is a retired paramedic, as well as a published writer and photographer. Her website susangunnphotography.com features a gallery of her work. She can also be found on Instagram @susangunnphotography. When she is not working, she can be found in the water or exploring the beauty of Florida.