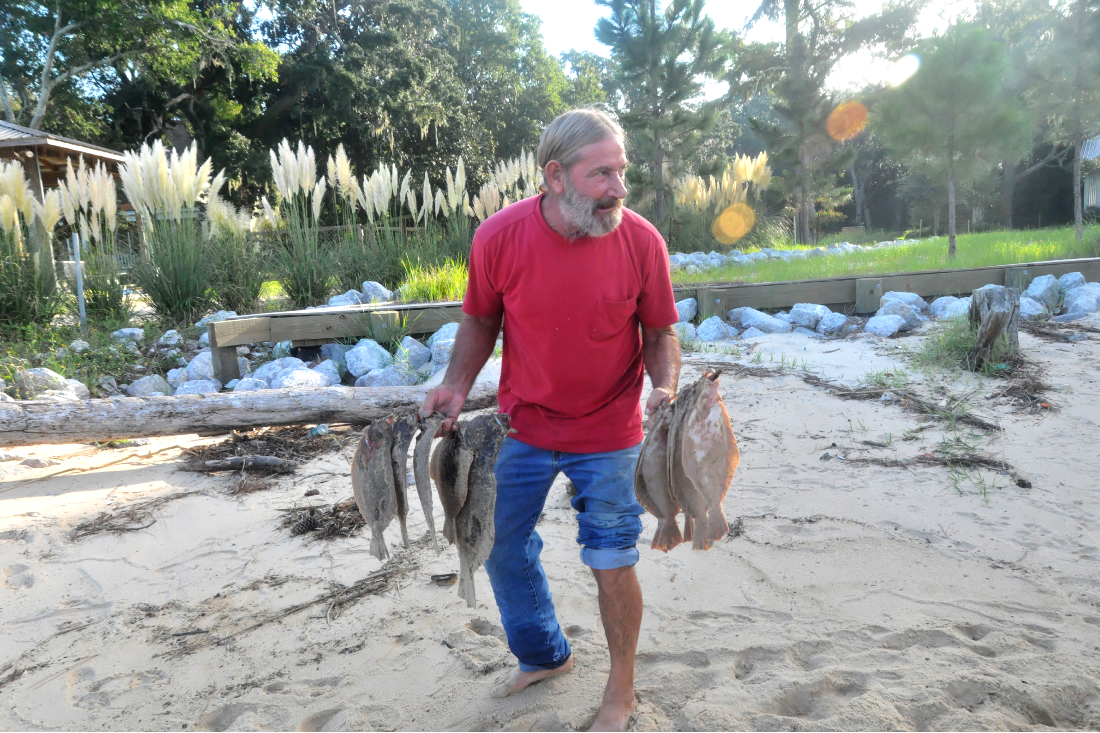 Bells rang, tin pots clanged, and gangs of locals grabbed buckets and bowls, spears and nets, and ran, bleary-eyed, through the faint dawn light to the water’s edge.

Here in Mobile Bay, Alabama, one of the strangest – and most rewarding – natural phenomena is in full swing. Here, and only here, regularly but never predictably, one of the largest free harvests of seafood presents itself.

Hundreds, if not thousands, of flounder, eel, and other fish race from the deep water of the bay to the shallow northeast shores between Fairhope and Daphne where they can be easily speared – or ‘gigged’ in South Alabama parlance – and scooped up by hand.

“At a good jubilee you can quickly fill a washtub with shrimp,” wrote naturalist and author Archie Carr in his book A Celebration of Eden.

“You can gig a hundred flounders and fill the back of your pick-up truck a foot deep in crabs.”

This event occurs each summer, between June and September, but nobody can predict exactly where or when… hence the alarm calls and hollering between the cottages and homes along this shoreline.

According to the experts at Auburn University’s Marine Extension and Research Center, jubilees occur only when certain conditions are met. Typically, they happen in the warm summer months, and usually just before sunrise. They follow a cloudy day with a gentle breeze and a calm, smooth bay with a rising tide. 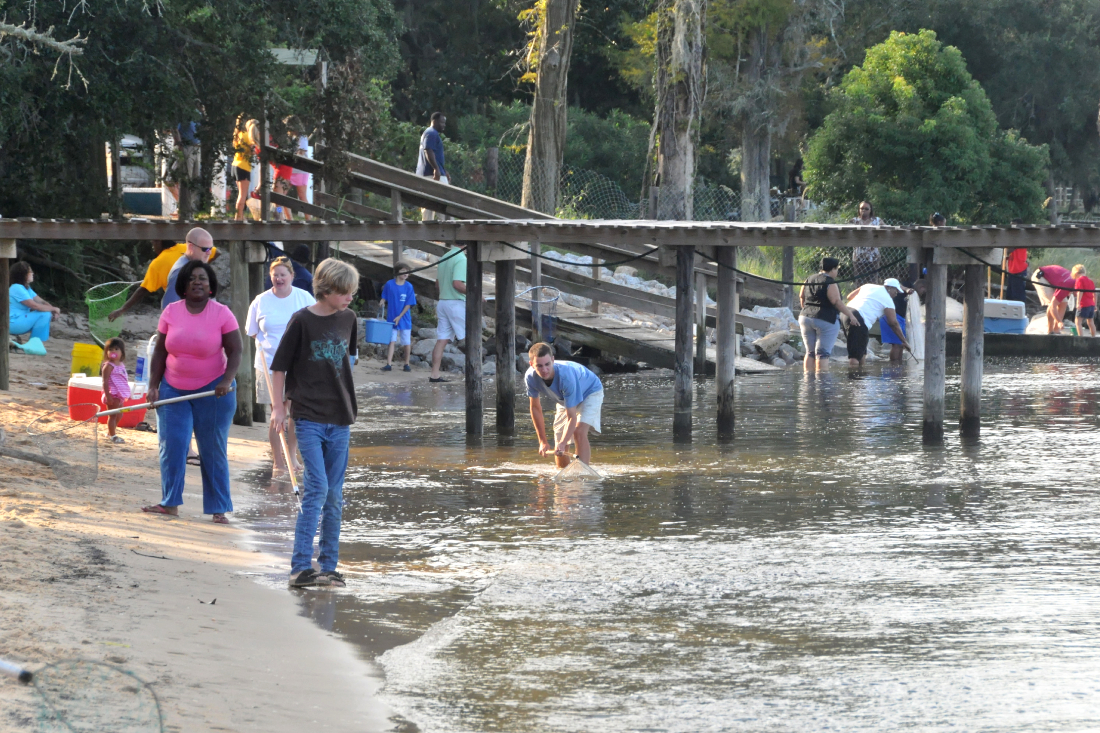 In simple terms, jubilees are caused when the water in the deeper parts of Mobile Bay rapidly de-oxygenates. With warm waters and large volumes of decomposing vegetation, there is an explosion of microorganisms, which strip the oxygen from the water. Unable to breathe or swim properly, the fish and shellfish head for the oxygen-rich shallows – and the awaiting fisherfolk.

Although a similar occurrence is recorded in Tokyo Bay, Japan, this small strip of shoreline in southern Alabama is the only place where the occurrence happens with any regularity.

The phenomenon has gripped the local area. Nearby Daphne has adopted the nickname ‘Jubilee City’ and, Fairhope, Alabama, has a boutique hotel called The Jubilee Suites. Even the seven-mile twin span bridge that connects Mobile and Spanish Fort is named Jubilee Parkway in honor of the fish-sensation, and the local phone listings will reveal Jubilee dentists, locksmiths, vets, churches, and even a cinema complex. Even though the earliest recorded instance of this event is from 1860, it was in the *Mobile Daily Register* newspaper on July 29, 1912, that the term ‘Jubilee’ was first used.

The newspaper told its readers:

“A fisherman of experience in explaining the unusual occurrence stated that it was a ‘jubilee’…. People who saw the wild scramble of fish and crabs on the sandy beach say they won’t soon forget the sight.”

But the jubilee only rewards those who are quick, and in the know.

The whole event can last less than an hour and by the time the mainstream news and radio are alerted, it is over. While the fish and crabs rush for the shallow waters in vast numbers, once the tide turns and the deeper water is re-oxygenated, they are gone – back to the depths.

Tourists and city folk who turn up hours after the event is over, responding to local media reports of the event, are comically greeted by the locals who have already cleaned up all the available seafood.

But if you did make the trip only to miss out on the event, you may still enjoy the bounty by ordering some of the catch at any of a number of local restaurants, cafés, or community cook-outs. 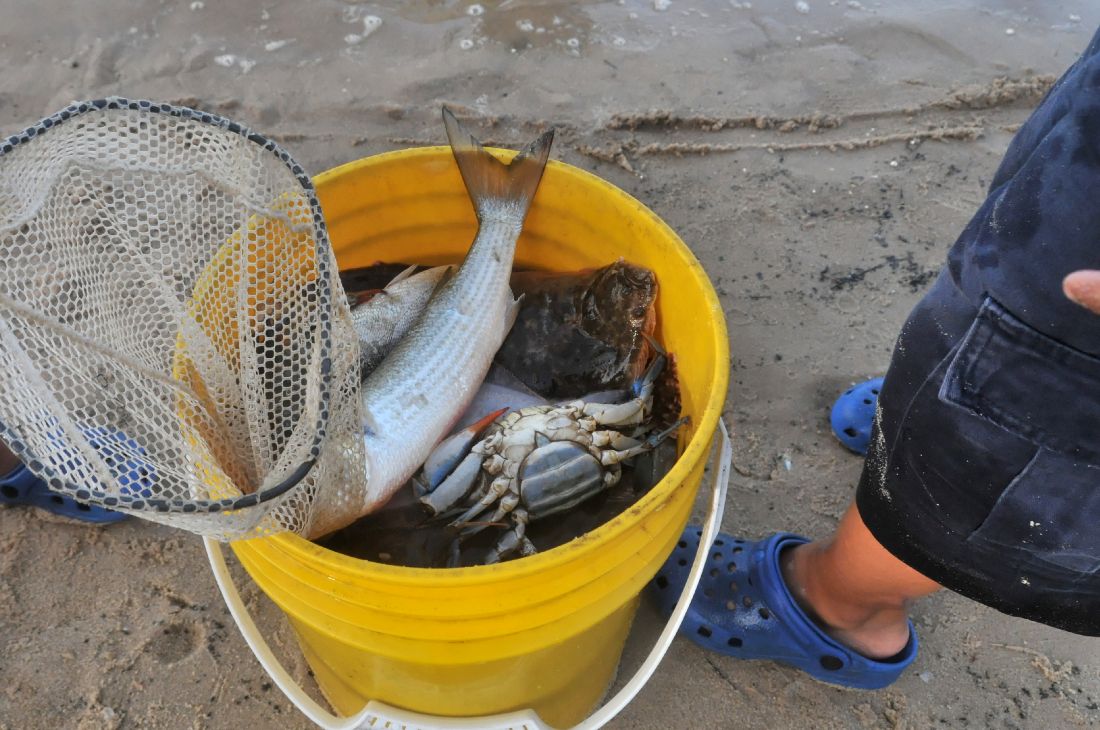 Locals who partake in this annual event have their own jubilee recipes. Some of these are closely guarded secrets, nervously protected by those who wish to preserve the continued good luck and bounty that Mobile Bay provides.

But many locals have shared their favorite ways to cook their haul in the *Jubilee Recipes* cookbook produced by the Junior League of Mobile. Here, they share nuggets of Gulf Coast culinary heritage; that crabs are best saved for gumbo, while the plentiful flounder should only be grilled with a little salt and pepper to prevent its delicate flesh from breaking or being overcooked.

The jubilee is a truly remarkable event. That it happens deep in South Coastal Alabama and has become so ingrained in the fabric of the local community only adds to its magic and romantic allure.

Who knows, you may be lucky enough to be passing through one warm early summer morning and hear the cry go up – “Jubilee!” If you do, come running… with your pots and buckets, of course. 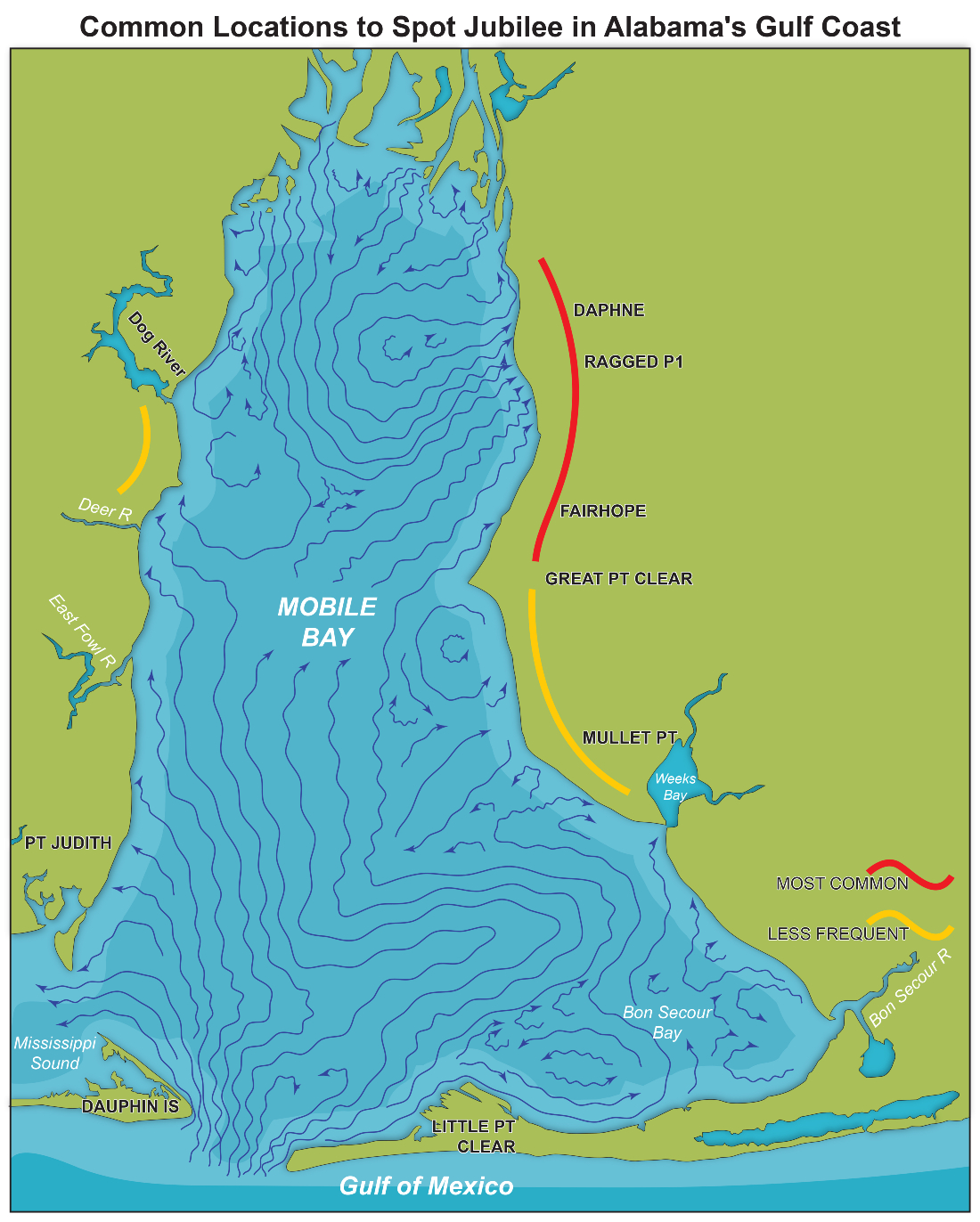