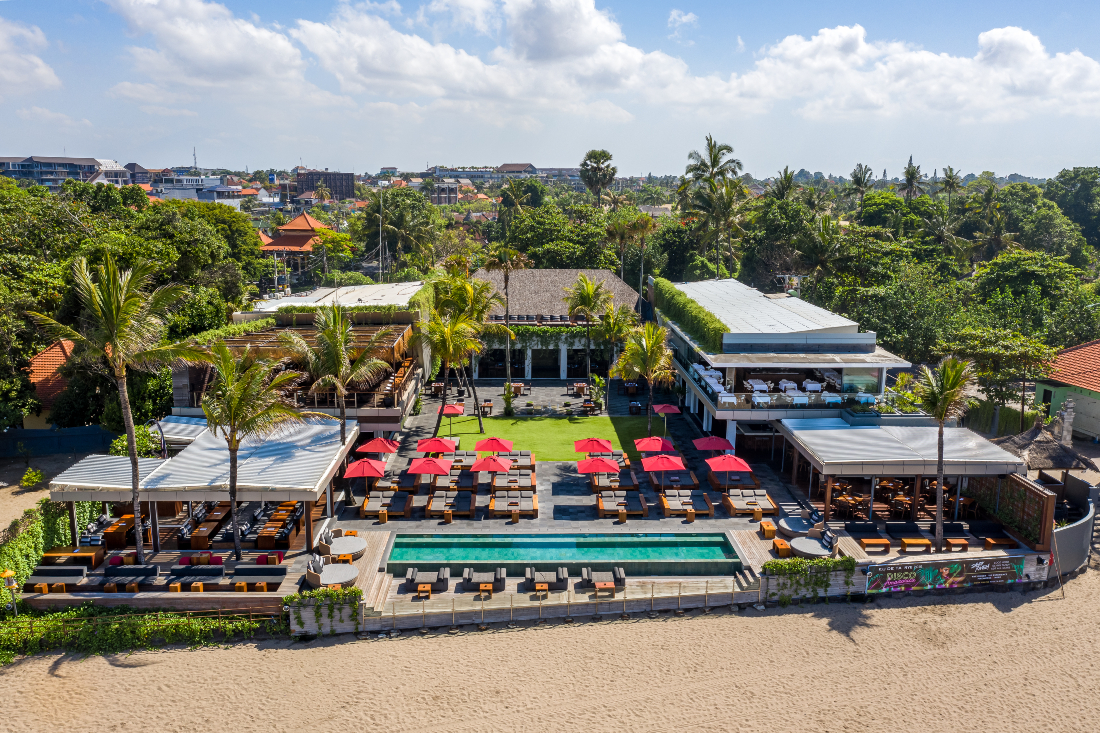 One thing there is no shortage of in Bali is beach bars. They are literally a dime a dozen, with most selling half-chilled Bintangs and average cocktails with local spirits. Good enough to get going, but not the most sophisticated night out. There are a few exceptions, and out of those few, KU DE TA stands out.

Affectionately known as KU, it sports a pretty incredible location. Seminyak Beach is not as well-known for surfing as the Uluwatu stretch, Bingen, Padang Padang, or even Impossibles. Still, it has the occasional excellent sandbank forming up on smaller days. This provides perfect little runners for any takers. Being less well-known as a surf break also means it gets less crowded than some more famous spots. 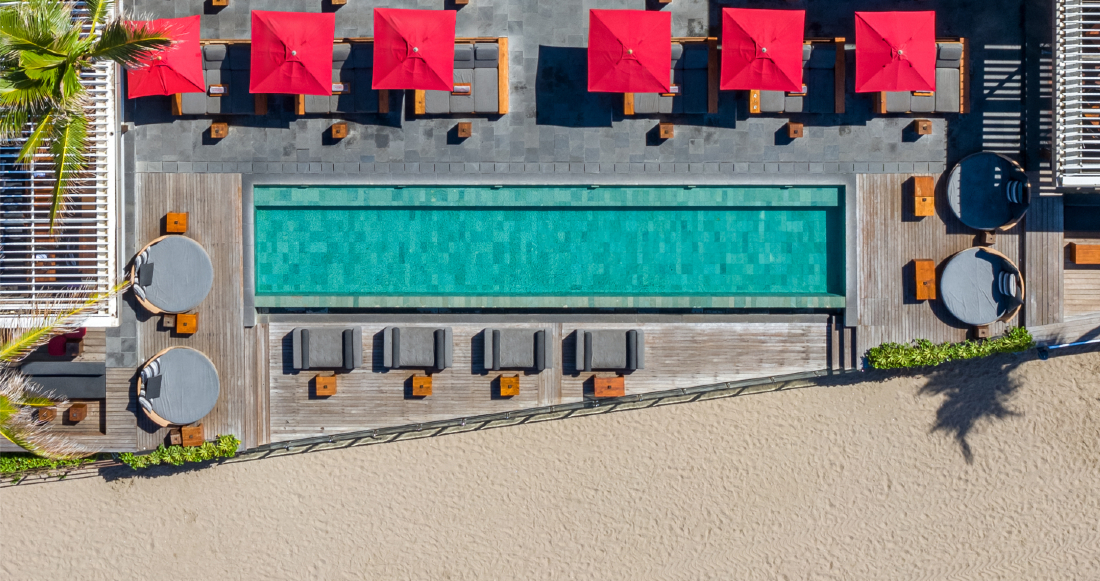 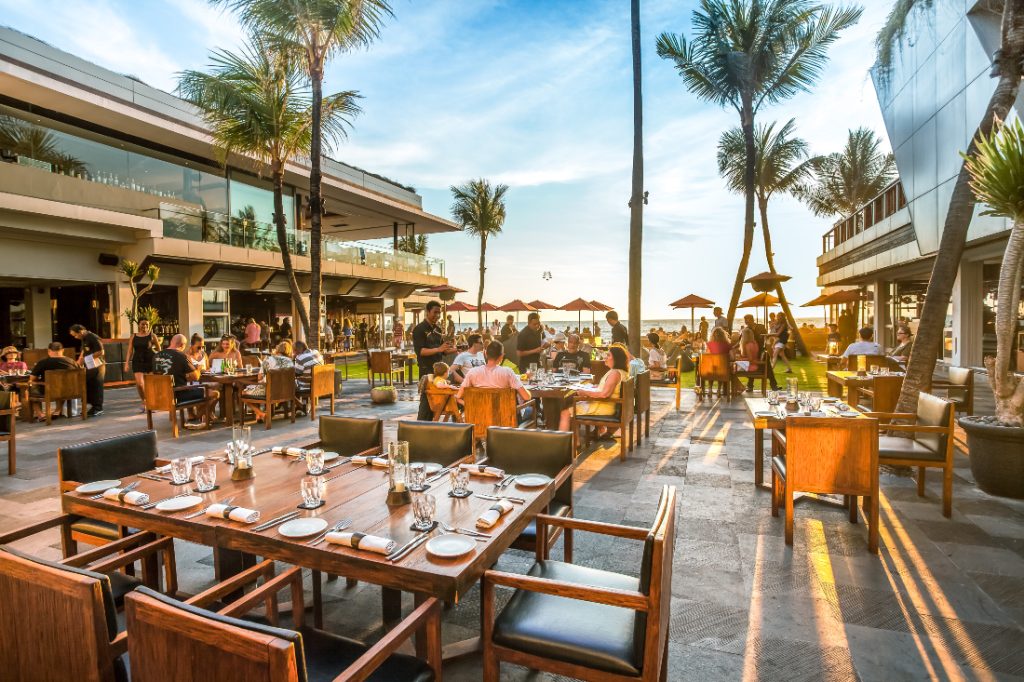 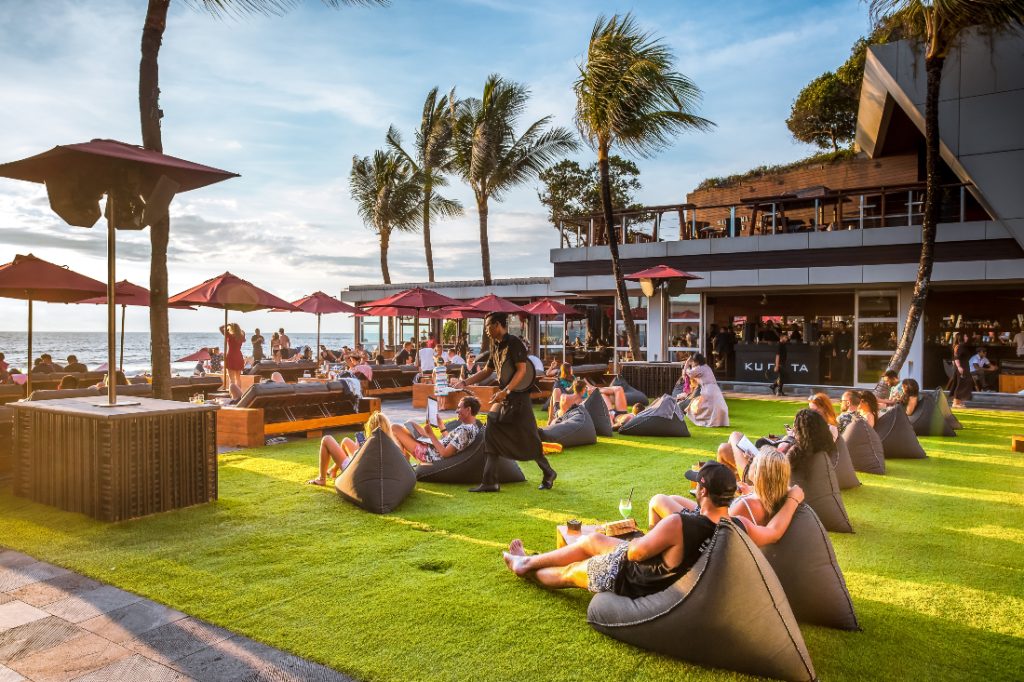 The first thing you notice about the atmosphere when entering KU is the distinct level of sophistication. There is a definite dress code, but the rules are within reason. The vibe is more than just vests and boardshorts. People have to make a little bit more of an effort than that.

The second thing you notice at KU is there are some gorgeous people around.

The pool is always full during the hot afternoons. There are slinky humans in tiny bikinis, as well as buffed men in their swimming attire, soaking up the rays and appreciating the views we just mentioned.

The third thing that comes front of mind is that there is always good music playing. There is no time for loud disco or screeching punk. Instead, the sounds are often DJ-led grooves that are so good that a KU DE TA radio station exists on Mixcloud consisting of recorded live sets. They are currently on episode 438. 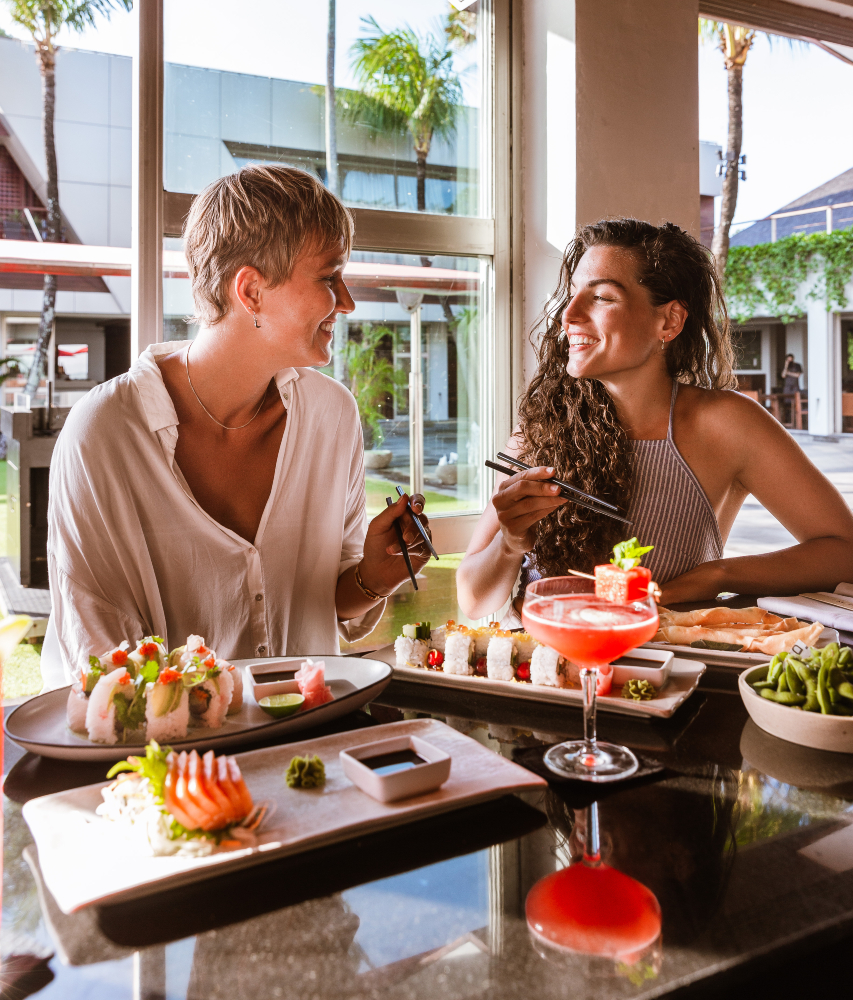 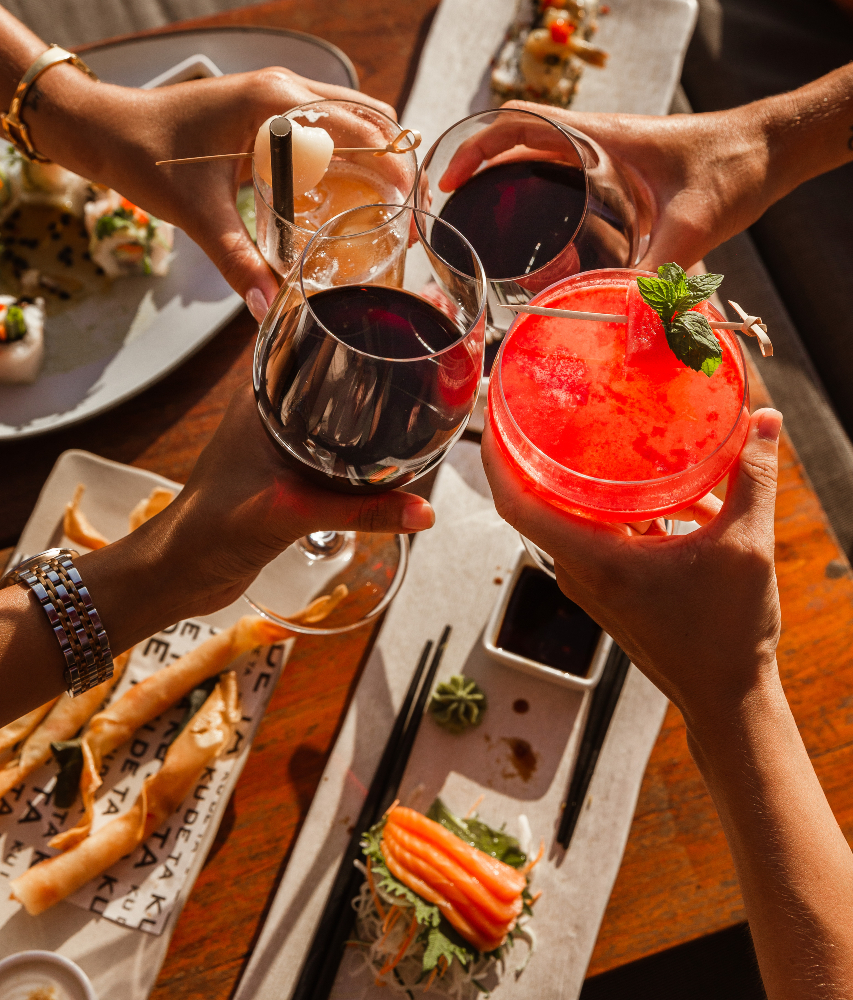 Arguably the most prominent element of KU is their approach to food. There’s nothing done in halves here, and every single side order to every main dish is treated with respect. There are bar snacks and starters, and there is a wonderful and busy restaurant.

The Mekejawi Restaurant is run by Executive Chef Jeremy Hunt from South Africa. It is fine dining on the beach. The Japanese Sushi tray is a divine adventure, coming in at $33, but there is literally something for everyone. The pizza and burger menu is varied and exotic, with the pizza around $13 and a standard burger at $8. An expansive cocktail menu, a good selection of imported and craft beers, and a curated wine list changes with the seasons.

A warm evening with loud but good music, masses of humanity and plenty of alcohol being consumed always brings out the nerves in some people, but the vibe at KU stays mellow. Accidentally bump into someone, and they’ll be the one apologizing, as the waiter is already bustling to the bar to replace the spilt drink. Smiles and friendliness abound, and this makes KU somewhat of a haven in Bali. 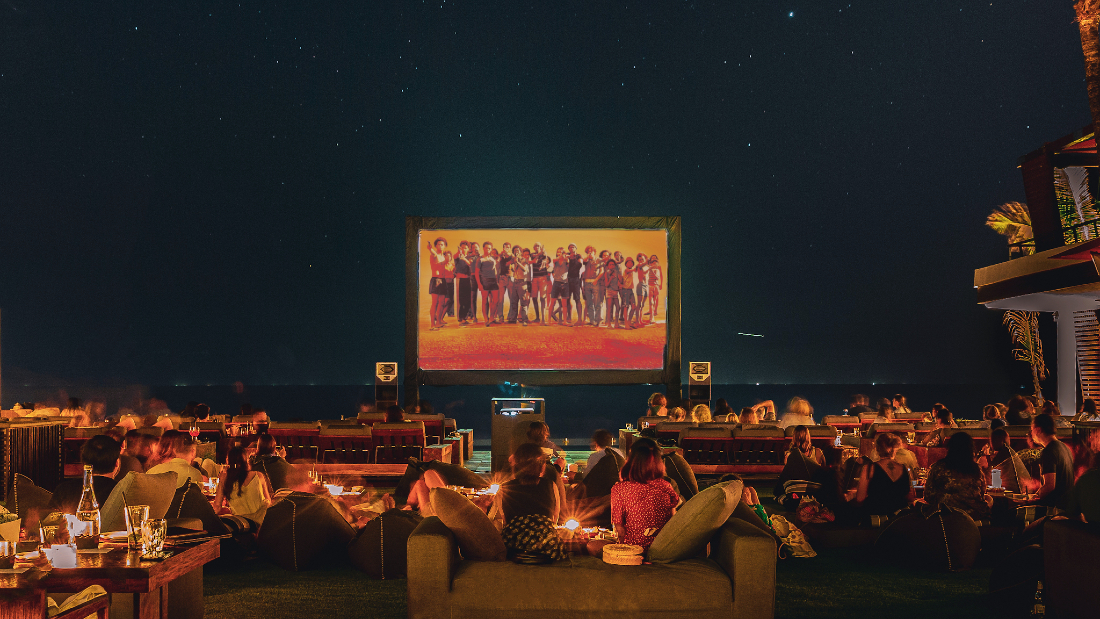 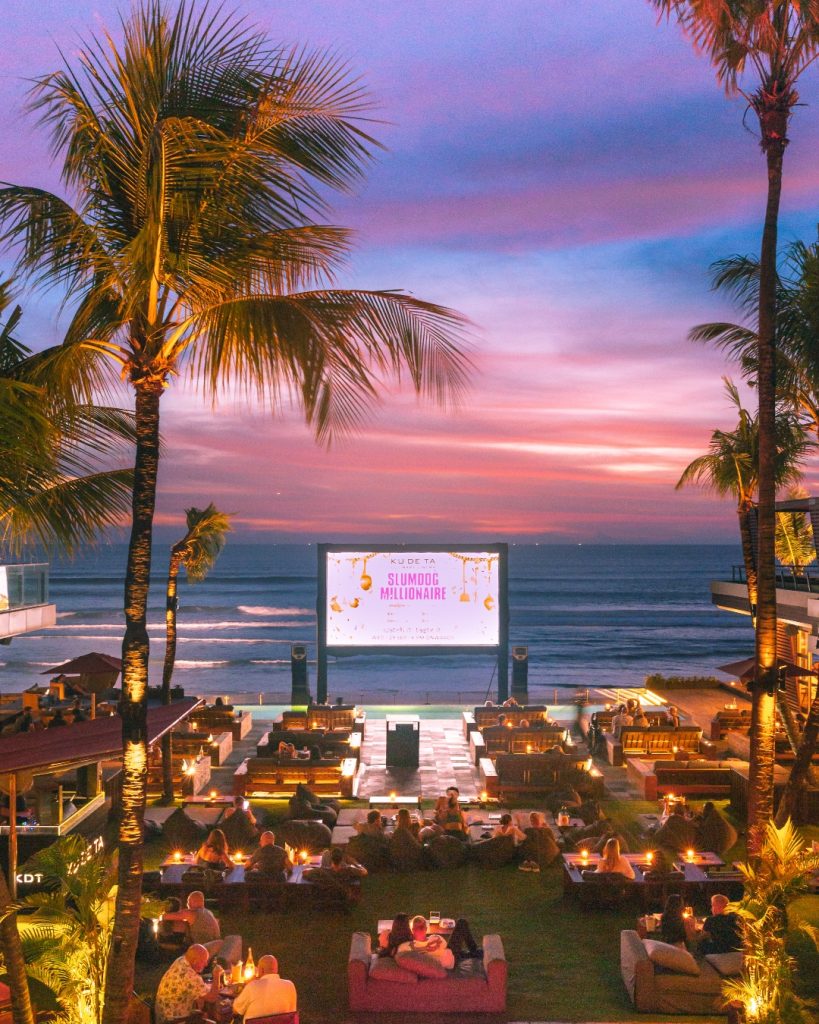 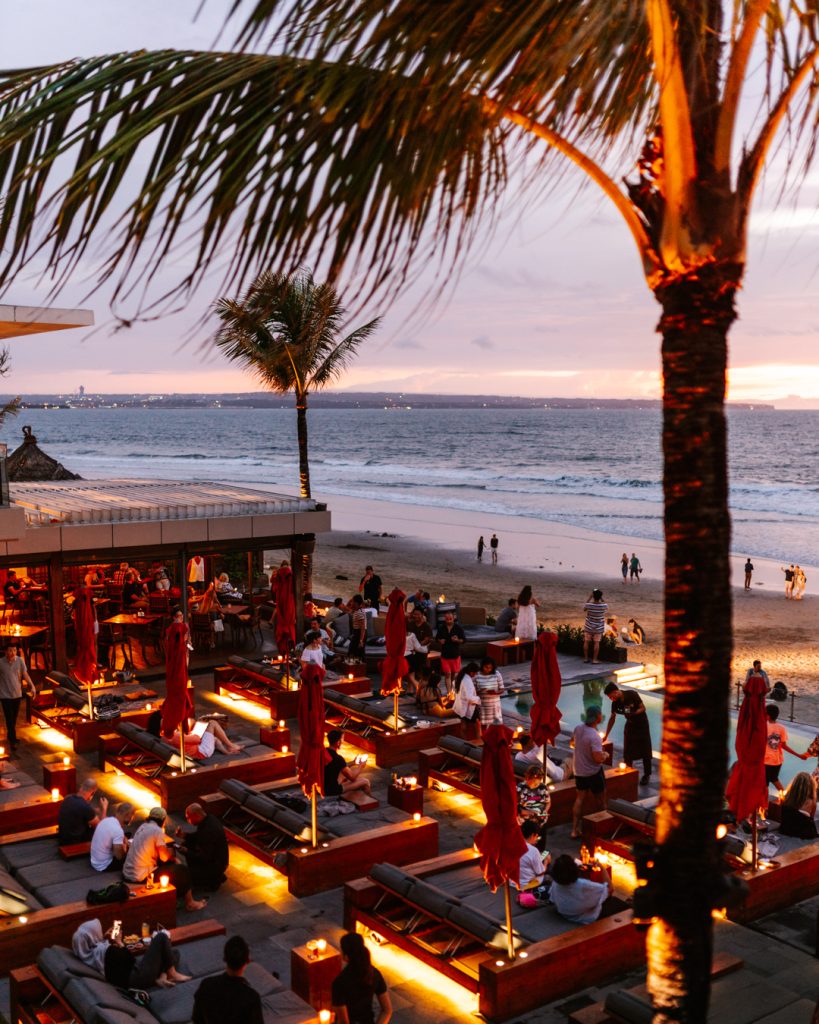 It also is a location that, despite its popularity, seems to welcome a vibe of discretion. It’s not the place to whip out your mobile phone and start taking uninvited photos of people swimming in the pool. This sort of behavior will be quickly dealt with, and one gets a feeling that this forms part of the safe-haven vibe they are constantly working on. For me, it means I can go with my wife and family, and with friends, and be totally confident that I will receive good service and consistently fantastic food, and I won’t be harassed by anyone whatsoever. If I need to find a quiet spot somewhere, they are available.

The best bit of advice I ever got was to get there early enough in the evening to grab a few loungers.

It is quite the perfect place to listen to a chilled sunset music set, cocktail in hand, and watch the sun go down in paradise.

With all the respect a place like Bali deserves, so many crowded bars and pubs are daunting and uninviting if you’re not into loud disco sounds and aggressive patrons. Instead, KU has instilled a culture of high standards over the last 14 years of chilled vibes, excellent food, great service, and the complimentary view of a gorgeous Balinese beach. There’s not that much more one could ask for.