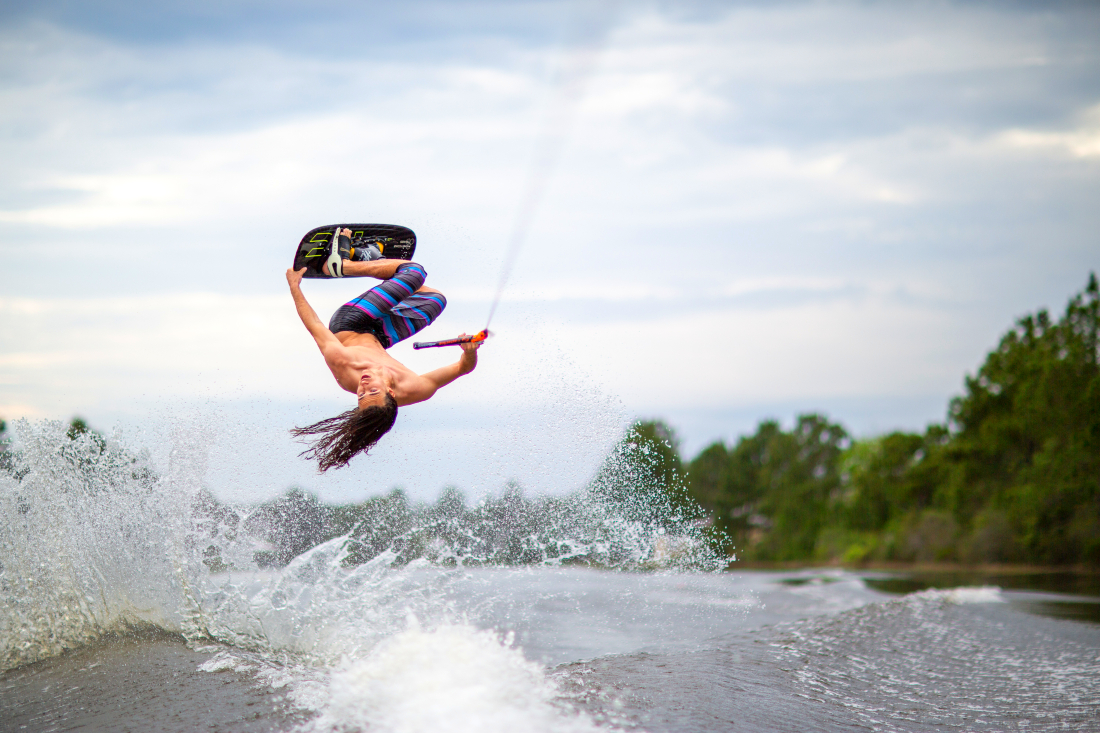 It’s a thick Florida morning, and the surface of the lake before me is glass; untouched and mirroring the stillness all around it. But it won’t be for long.

In the center of the lake sits a red and white ski jump with corresponding buoys measuring out a landing zone of 100 feet, 150, 200. I suddenly find myself wondering the level of fearlessness that propels a person to strap a pair of water skis to their feet and launch themselves off a ramp at speeds over 70 mph. Oh, and then land themselves right side up atop the water on the other side.

When I imagine my own attempt at something like this, it ends a lot of different ways, but right side up is definitely not one of them.

Through the pines of the surrounding state park comes a gentle breeze, and the summer cicadas are announcing the start of a new day.

And then I hear it. The low hum of a motor announcing itself. 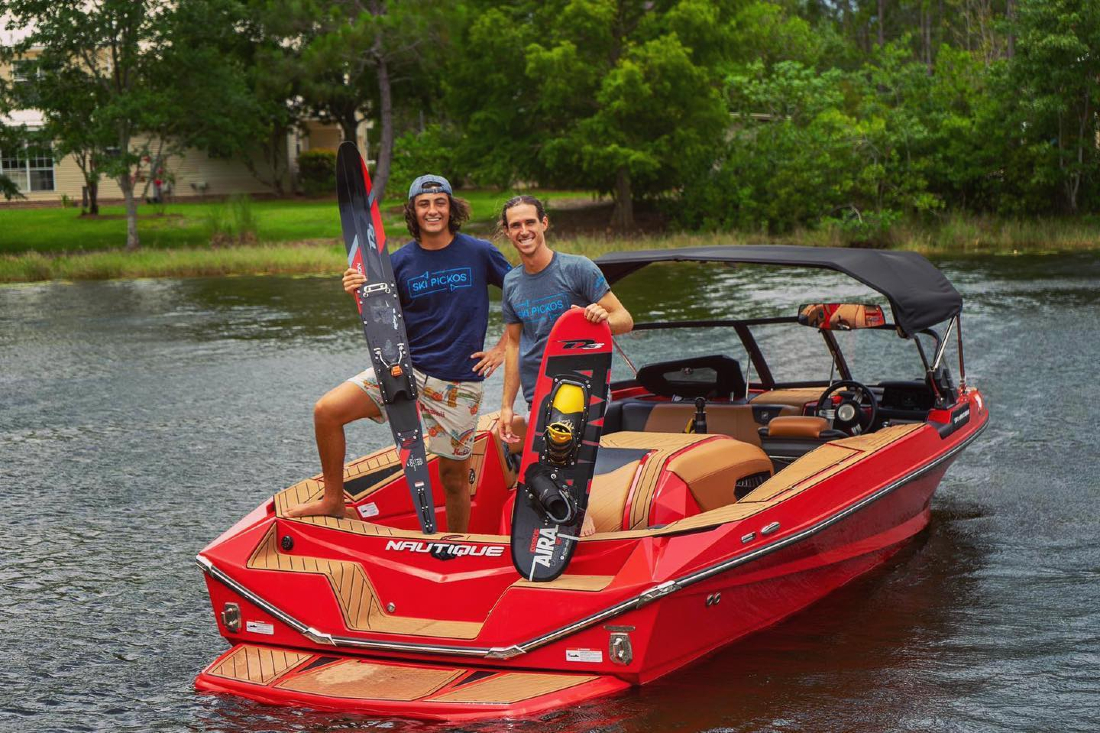 Moments later, I see a royal blue Nautique ski boat whiz by. It’s pulling a young man in gray swim trunks, a black life vest, and long brown hair pulled tightly into a low bun. When the boat makes its way back around, the skier is now facing backward, the handle of the rope in a toehold around a flexed left foot that’s folded across his opposite thigh. As he twists and turns, throwing both 180 and 360 spins to the mix, while weaving back and forth across the wake simultaneously, he looks like a cross between a wakeboarder, breakdancer, and contortionist. I’m quickly reminded that this is all taking place on the surface of the water at nearly 20 mph.

For mere mortals like most of us, this would be an impossible feat, but for Adam Pickos, this is just another day in the life of a professional water skier.

“I grew up on these lakes,” said the 28-year-old Santa Rosa Beach local of the three freshwater lakes that comprise Pickos Waterski School. Here, at age three, is where his father taught him to ski. Two years later, he was slalom skiing, and by age six, he began competing in tournaments. His first Nationals competition took place when Adam was just nine. Now a two-time world champion and national record holder, he’s one of only seven people in the world to trick ski for over 12,000 points. Adam trains six days a week, multiple times a day. When asked what’s helped keep him going all these years, he laughed. “Skittles. That was my bribe growing up.”

In addition to years of hard work and an unwavering passion for the sport, he has yet another thing to thank: good genes.

For those who dabble in the waterski world, Cory Pickos is a household name and a living legend. Like father, like son, Cory is also a two-time world champion, one that’s earned him twenty-four world records (the first of these at age 13) and a well-earned place in the American Water Ski Educational Foundation (AWSEF) Hall of Fame. Not to mention, back in 2009, he and Adam made history as the first father-son duo to make the finals at the Canada World Championships. 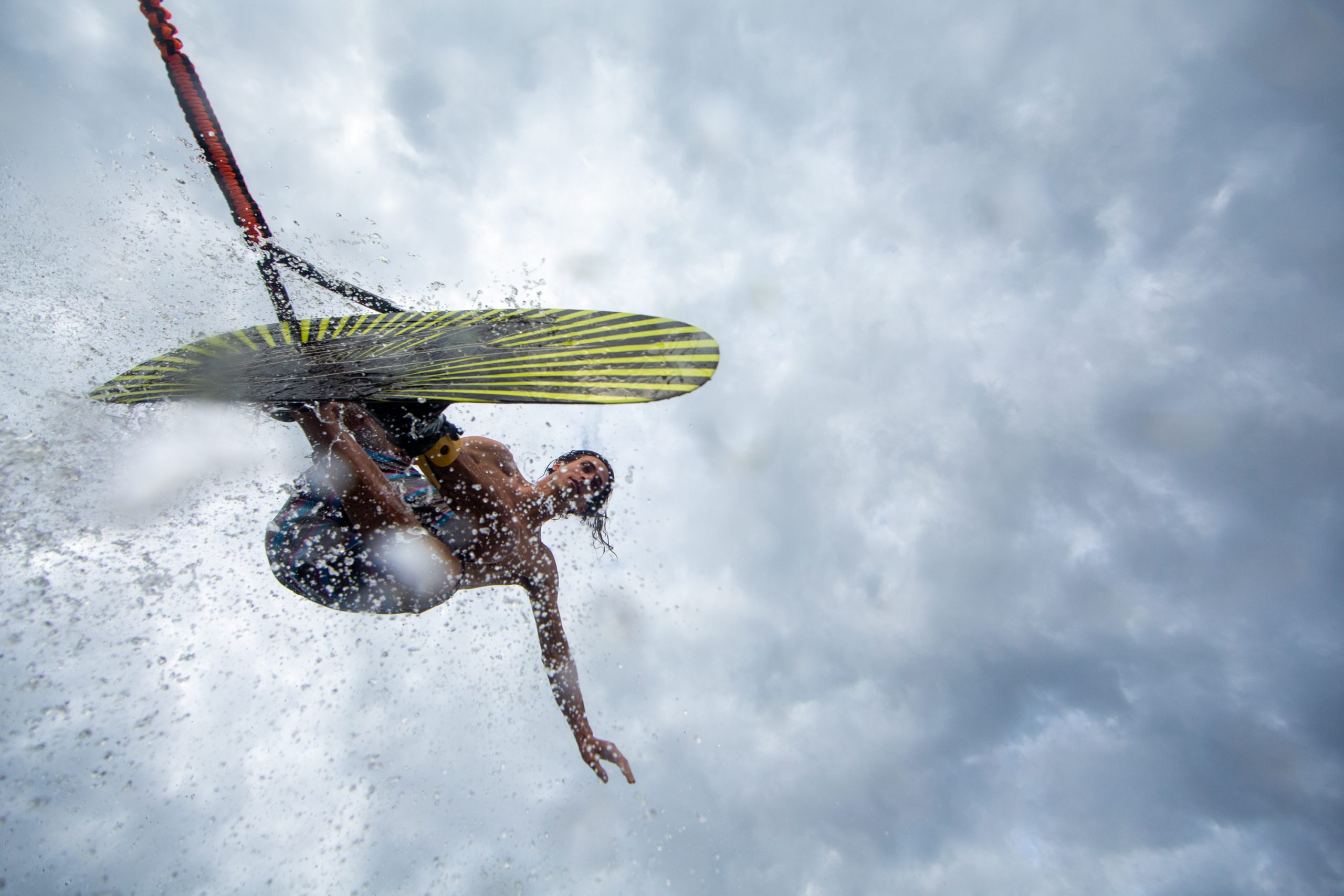 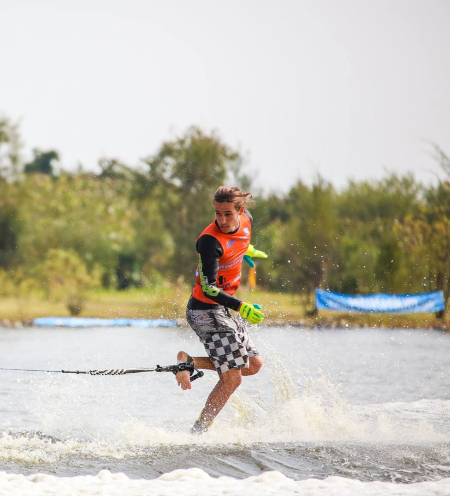 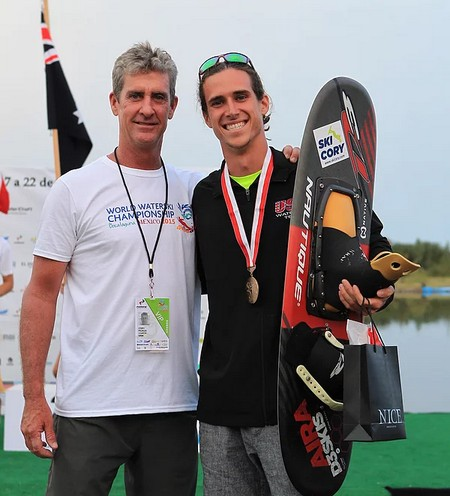 As for Cory’s early motivation?

“When I was young, my dad would tell me I could either come to the construction site and dig ditches, or I could ski,” the Hall of Famer told me. “I chose to ski.”

Since the ripe age of 16, Cory has run a handful of ski schools across Florida. He first began in his parents’ backyard in Eagle Lake. Over the years, he’s learned to master the art of chasing summers with training and coaching opportunities that have led him all over the world – often with his son, Adam, in tow.

“I have some of the best memories tagging along with my dad to train,” said Adam. ”Skiing with the Australian team in the Murray River was definitely one of them, long before I really knew how cool that was.”

In 1992, Cory and his wife Rose moved to Santa Rosa Beach to open Pickos Waterski School.

Fast forward 28 years and Adam is now making his final turns while his dad watches proudly from the boat. He makes the switch from toe-tricking to hands (a style of trick skiing very similar to wakeboarding) and proceeds to perform a series of backflips and front flips, seamlessly, from one side of the wake to the other. A handful of neighbors, out for their morning walk, come to watch the show and, if they’re anything like me, are merely trying to keep their bottom jaws in place. 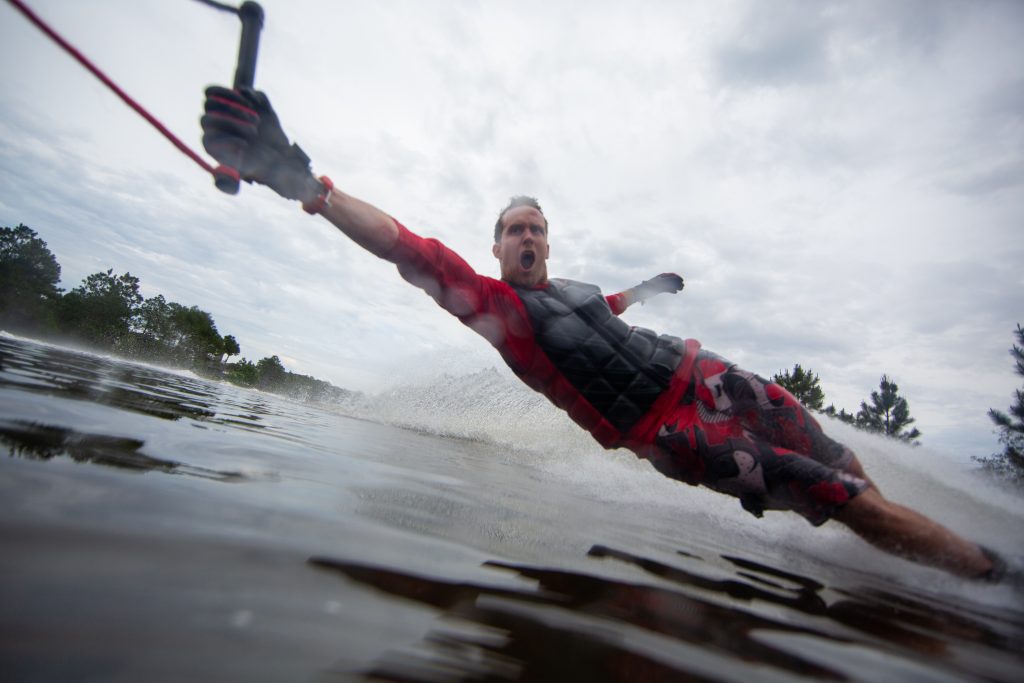 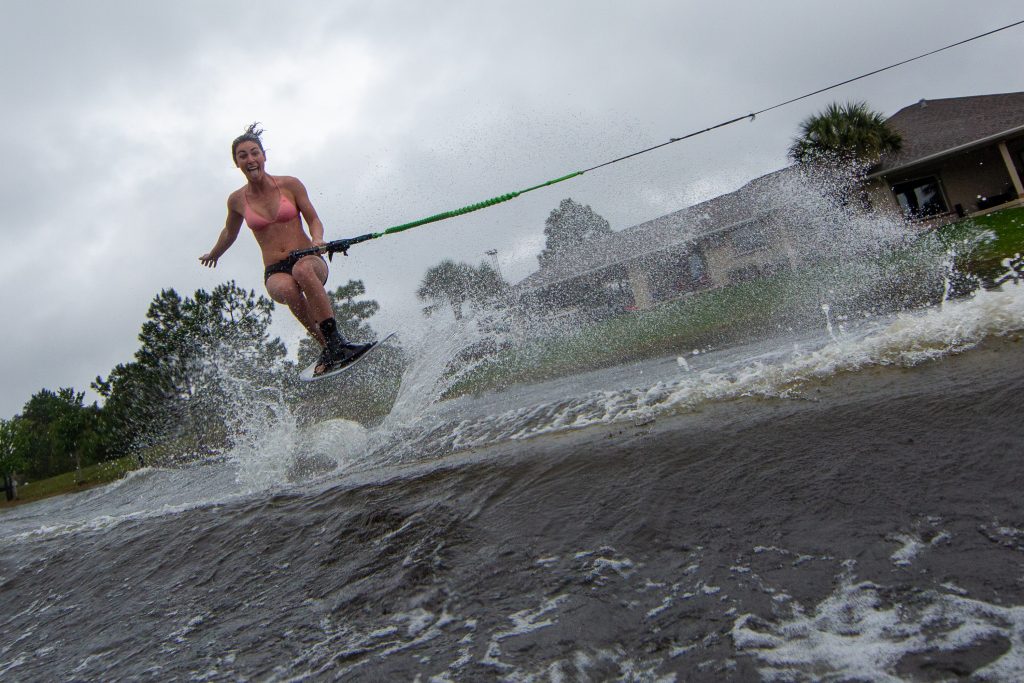 I’m joined at the dock by Adam’s wife, Caitlin, who wishes them a cheery good morning, and then says, “I think we surfed too much this weekend. He looks tired.” I’m quick to chime in and laugh saying that he definitely doesn’t look tired to me.

Caitlin, who’s rocking a wet braid, athletic shorts, and a pink PFG long sleeve, married Adam last November and took on a community relations role for the school in order to help gain local awareness, including that of businesses and schools around the area. Of these, is Ohana Institute just up the road in Inlet Beach, Florida, from which a handful of students flock for lessons and training.

One of these students is Hattan Montgomery, a competitive figure skater who, after relocating from Nashville to Northwest Florida with her family, found her home here at Pickos. “Hattan’s transition from elite figure skating to waterskiing was a defining time in her life, and for our family,” said her mother Cherie. “It was during our relocation that she skied for the very first time, and she couldn’t have landed at a more amazing place.” Hattan, who now trains three times a day, six days a week, has since risen to become the 2020 Southern Regional G4 Tricks Champion, 5th overall, and plans to start jumping very soon. All this, in less than a year.

But this wasn’t always the plan.

“I had the goal of becoming an Olympic figure skater and was willing to work myself harder than anyone,” said the 15-year-old, who as a result, suffered many severe injuries that took her out for months at a time. That’s when she realized it was time to embark on a new journey, one that she thought could lead her “to a place figure skating never could.” After just a few months, it’s safe to say she’s hooked.

“I never want to think about not waking up each morning, ready to pull up my hair, throw on my gloves, tighten my boots, jump in the water, and yell, ‘Ready!,’” said Hattan. “I often call myself an adrenaline junkie and, as Cory tells me, I am a bit crazy. The exhilaration I feel as I fly across the water is something that fills me with excitement and the drive to improve. This is a feeling I never want to, or will ever, give up.” 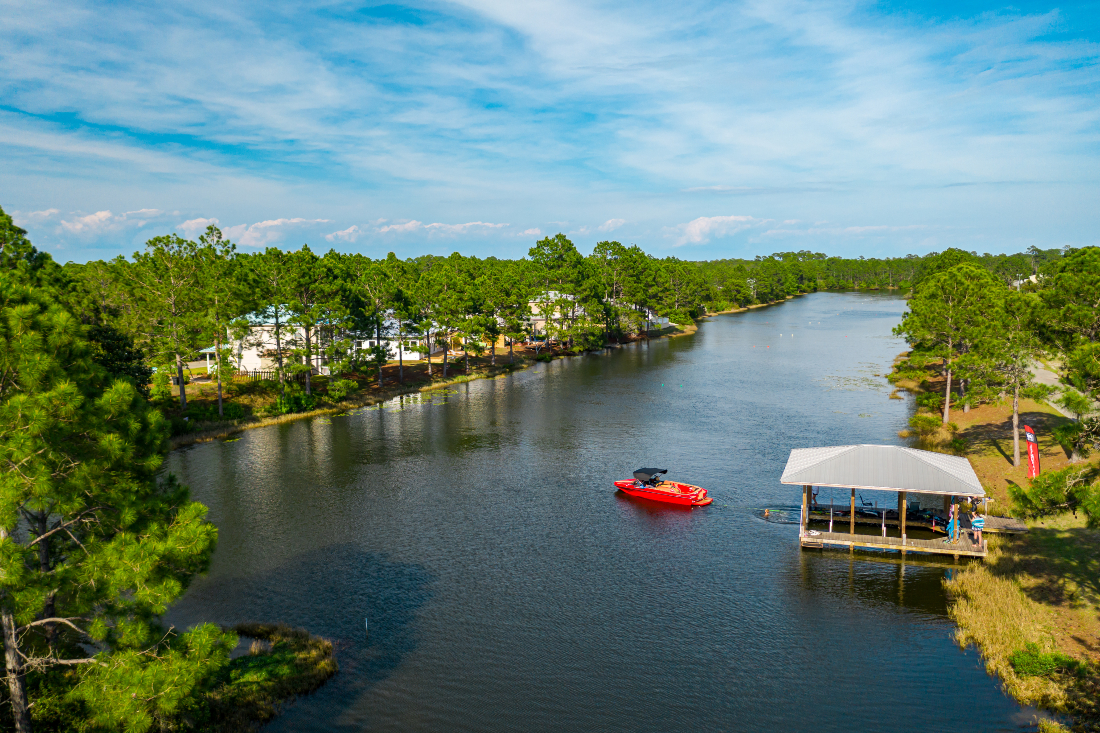 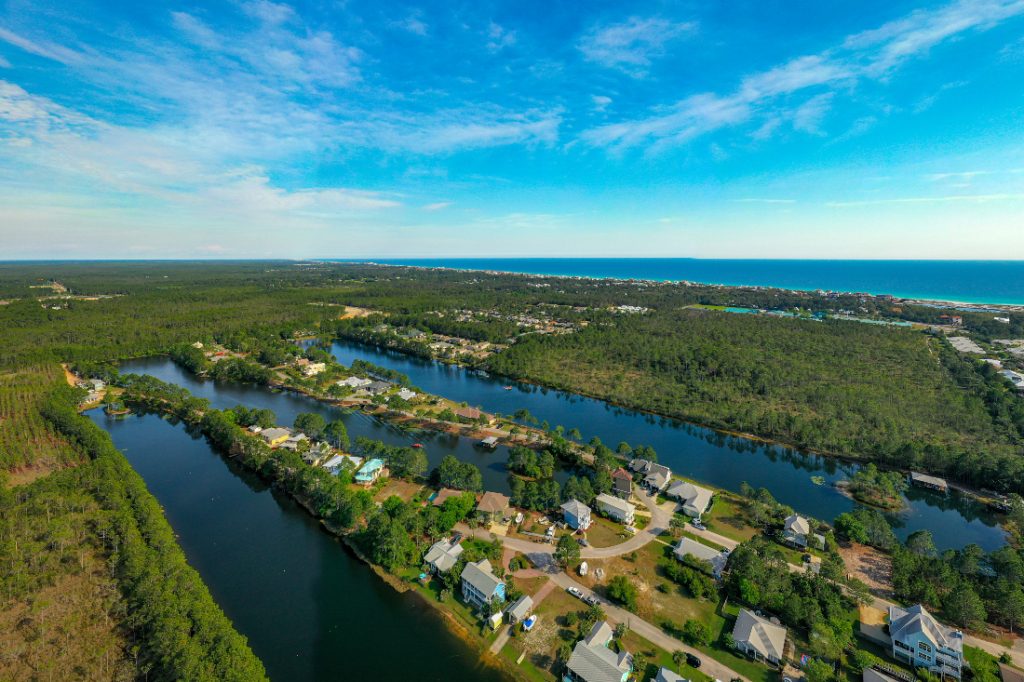 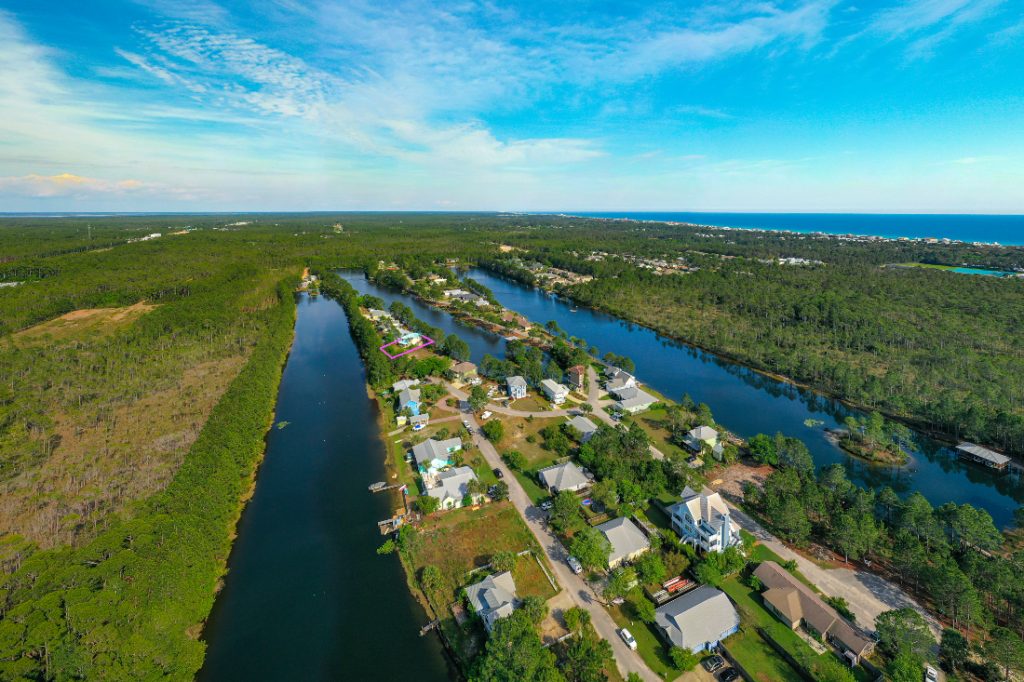 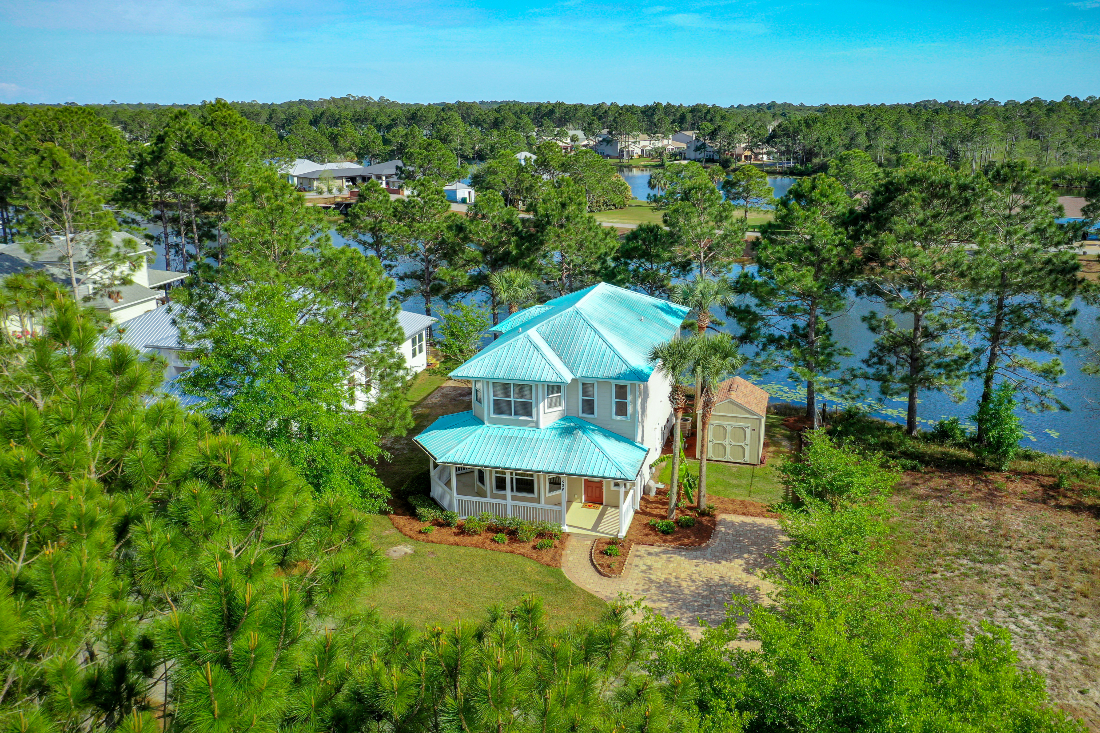 The school is located one mile from the beach, just off the aptly named Slalom Way, and has been a breeding ground for world-class athletes from all over the globe, including Argentina, Australia, Belgium, Brazil, Chile, Czech Republic, Denmark, England, Finland, France, Greece, Japan, Mexico, New Zealand, Norway, South Africa, Spain, and the United Arab Emirates, to name a few.

In fact, professional skiers from all of these countries grace the small beach town each summer for the World Junior Waterski Championships, hosted by the school.

Still, even with their huge international following and an abundant pool of athletic talent continually drawn to these shores year after year, beginners, professionals, and veterans alike are all welcome to experience this little piece of paradise in action, from sunup until sundown.

Take it from Cory Pickos, who is literally in the boat from sunup until sundown.

“That’s his office,” said Adam as we made our way to the main dock. “I don’t think he’d trade it for the world.”

Around the lakes sit 46 homes, a good number of those belonging to, or currently resided in, by skiers. As I take a seat beneath the tin-roofed dock in front of the clubhouse, I’m lucky to meet a handful of them arriving for their daily runs. Looking at most, I realize that until you see them strapped, ready, and flying across the water, you wouldn’t know you’re in the presence of world-renowned athletes.

I soon learned that to my right is 17-year-old Federico Jaramillo, aka ‘Fed,’ of South Walton High School. Hailing from Bogota, Colombia, he just so happens to be the number one slalom skier in his age group and recently obtained his third world record. He’s joined by his one-year-old puppy who, ironically enough, hates the water. Fed’s girlfriend Kenna Hansen is 15th in the world for girls’ slalom and tromping around the dock getting her equipment ready. As she strapped up her custom Reflex boots, a hardshell contraption with large silver buckles and a spring-loaded heel, she laughed and told me, “They’re comfier than they look.”

Minutes later, the boat returned with Coach Cory at the helm, who’s quick to tell Kenna, “Are you gonna Facebook all day or are we gonna do some skiing?” And then they were off.

Adam jetted off to do some coaching of his own one lake over and up walked 71-year-old Brenda Cavenaugh sporting short hair in a low ponytail and carrying her own gear. I asked if she’s here for a lesson, and in a soft Mississippi accent, she told me she first learned to ski back in her 20s then picked it back up when she turned 60, and had since been taking lessons on and off with Cory. What she didn’t tell me is she’s a top-tier veteran skier, who just years prior took home the gold in trick skiing for the Senior World Championships, at age 66.

There’s a reason why skiers of all ages, levels, and disciplines have found their home here at Pickos Waterski School, and to think it all started with one man is nothing short of remarkable.

“He’s always been a great mentor and coach,” said Adam — who, though Cory shows no signs of stopping anytime soon, will one day take over the reins. “He’s the most patient man on the planet, and he really has a different way of seeing things than 99% of other coaches out there. It’s truly a gift, and one of the reasons he’s so successful.”

“If and when we have kids, I would love for them to be competitive skiers and grow up like Adam did, around all of these international influences,” said Adam’s wife Caitlin. “It’s such a gem to be in a small town like Santa Rosa Beach, but with people flying here from all over the world.” 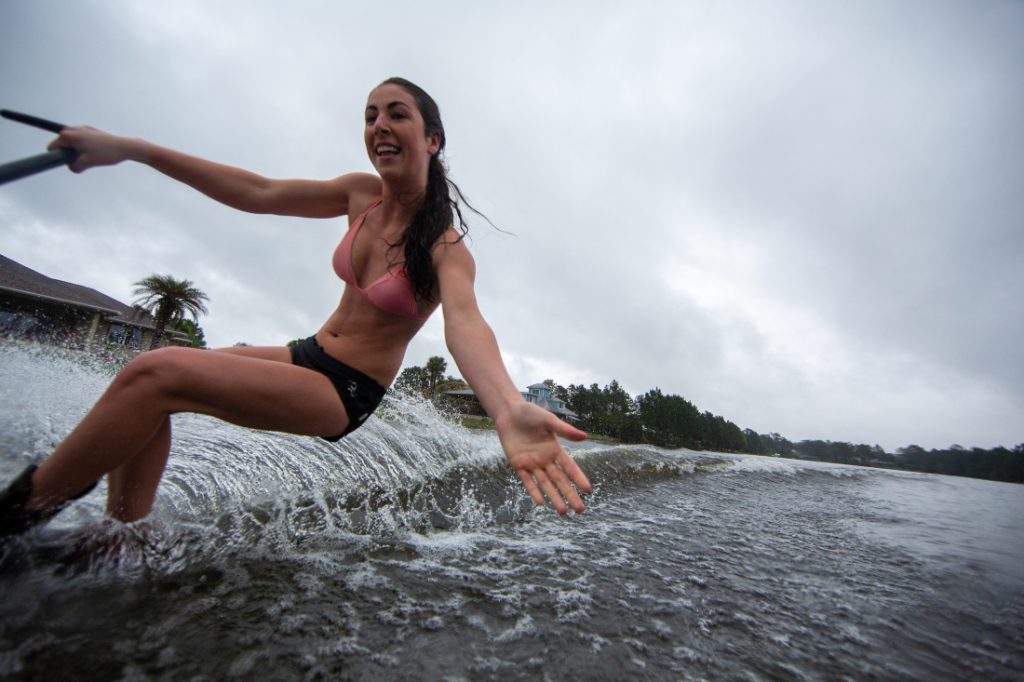 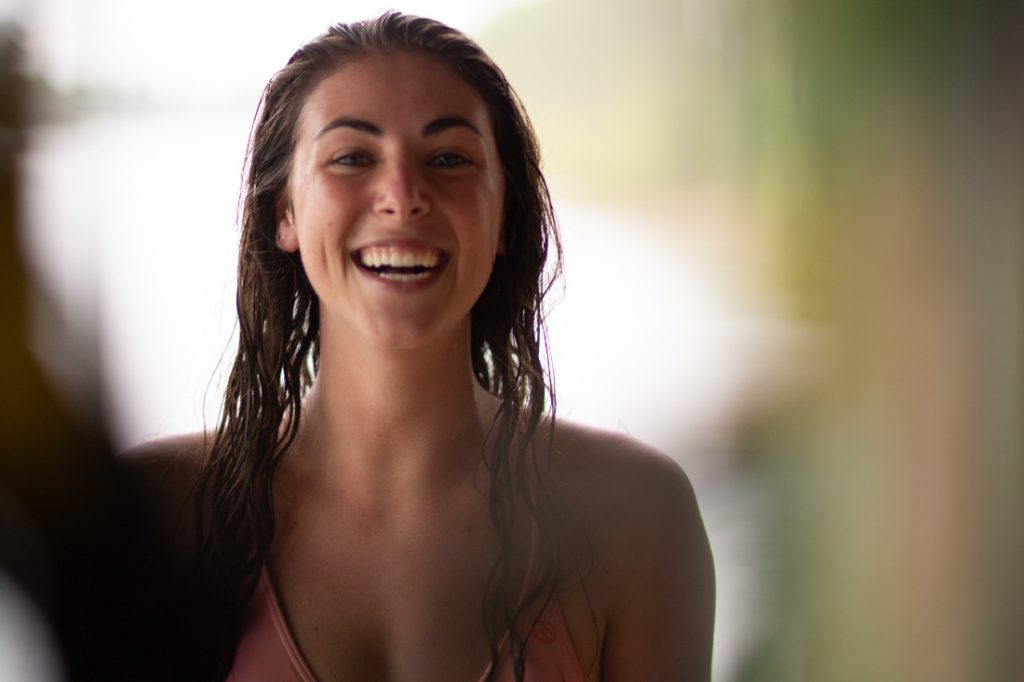 1) When learning to get up, always keep your arms straight

3) Once up, keep your hips under your shoulders, nice and strong

5) Smile and thank your boat driver and coach for the fun!