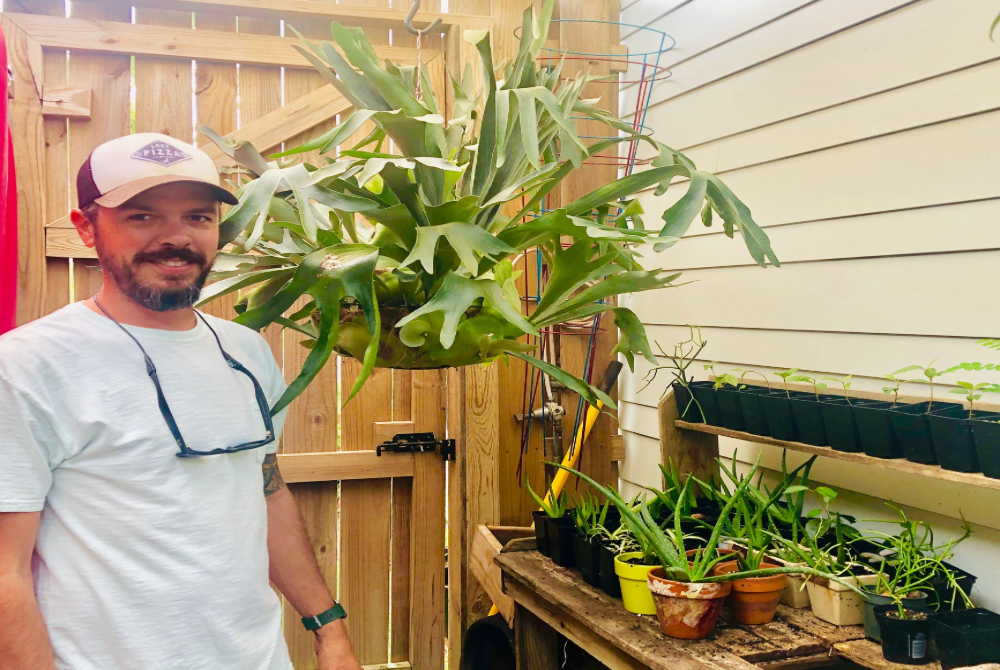 What happens when a father of two active young kids with a bachelor’s degree in plant sciences decides to piddle around on his two gardening benches? A germ of an idea takes root!

A local family recently planted a community seed that’s fast becoming one of the most fun scavenger hunts to ever pop up around town. Plant Some Love, 30A is the brainchild of Santa Rosa Beach resident Brooks Roberts, who decided that all the plant propagation percolating in his back yard could draw more people outdoors, and spread cheer at the same time.

It worked. He hides succulents and other plants in plain sight—simultaneously sprouting good vibes. 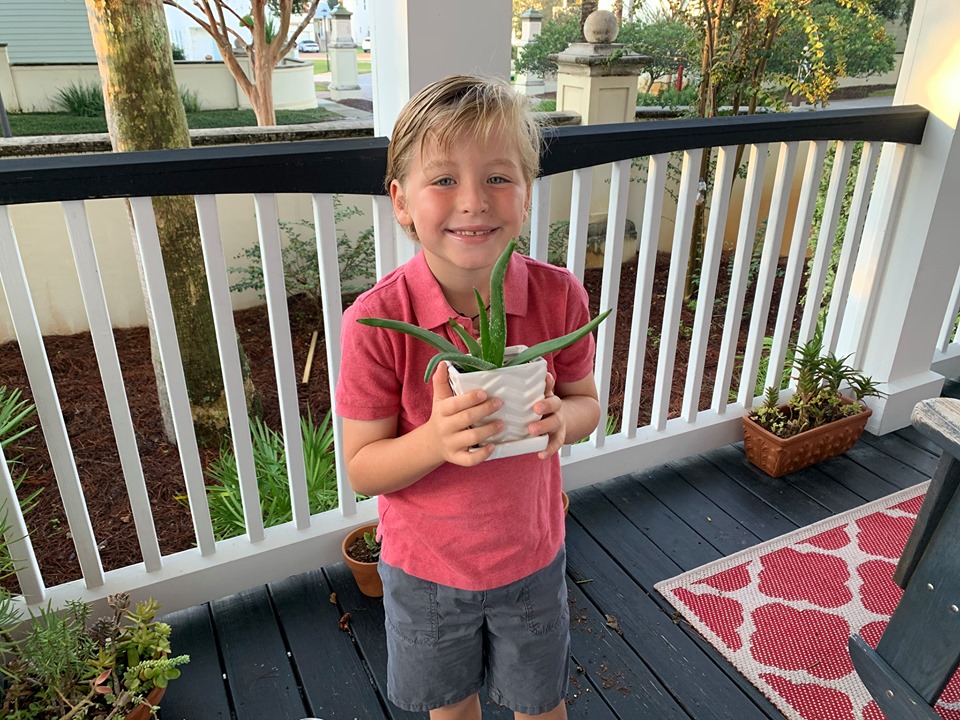 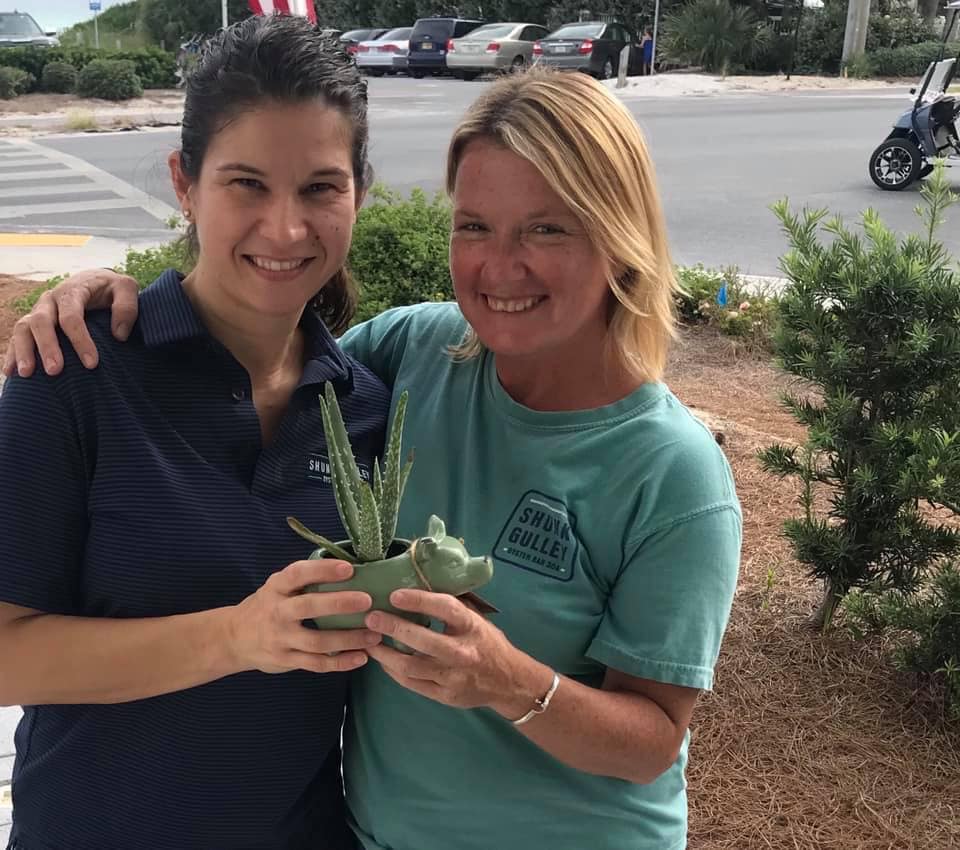 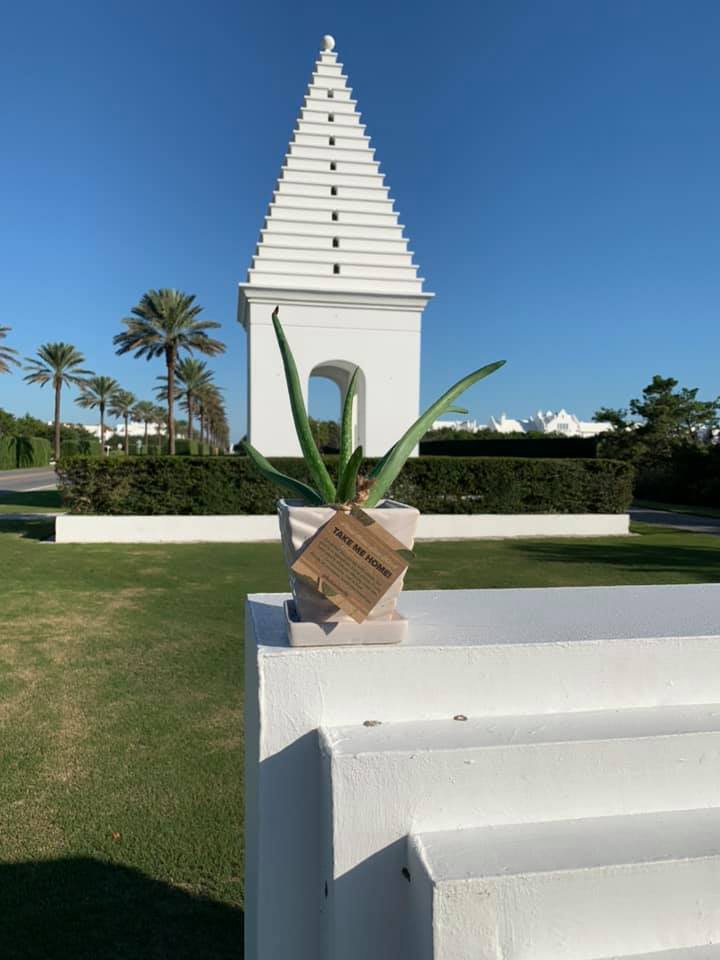 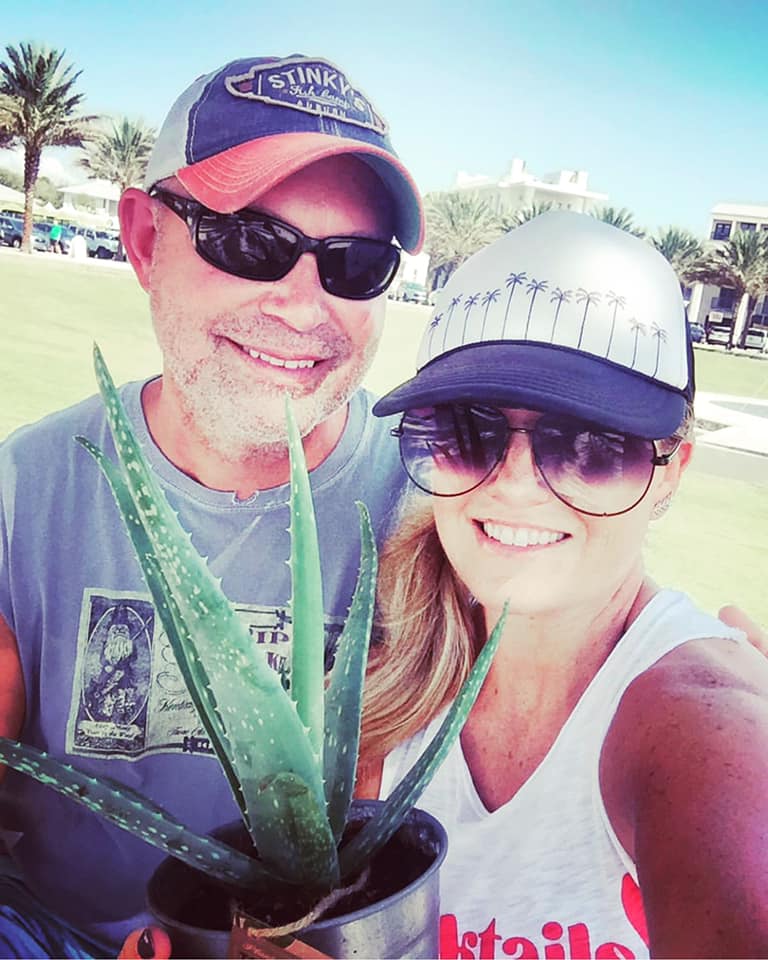 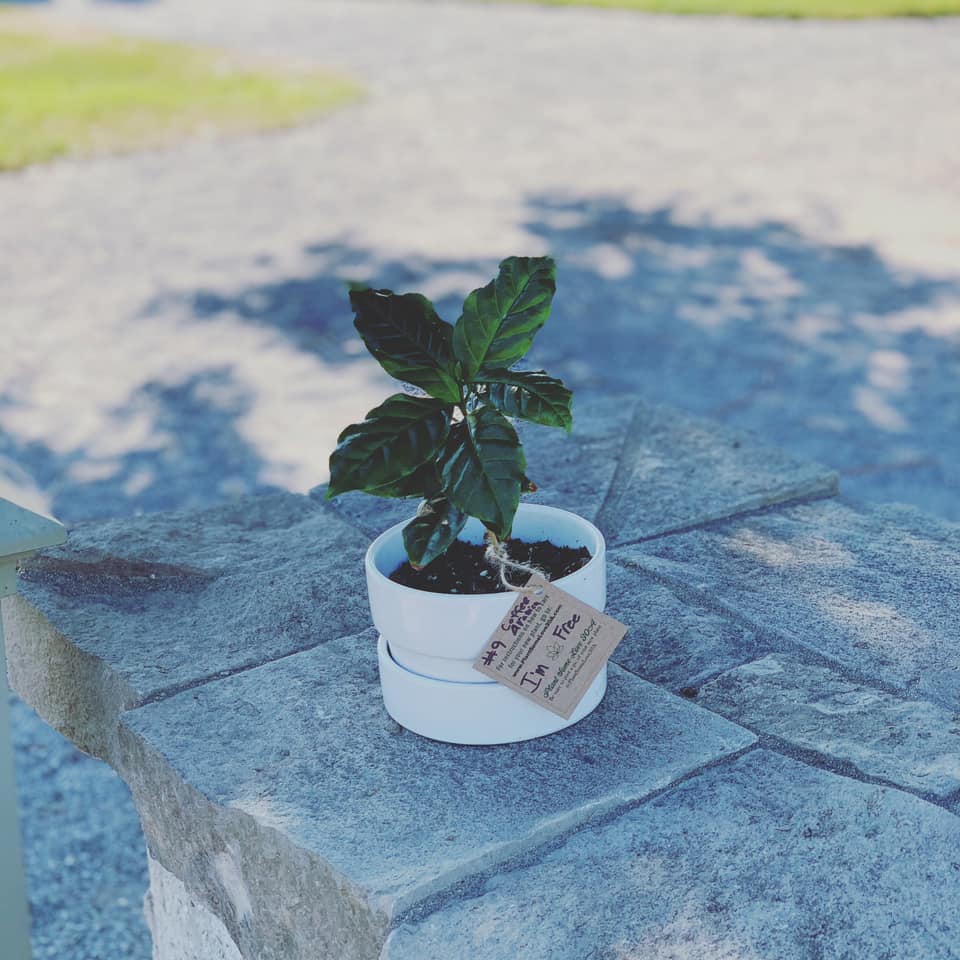 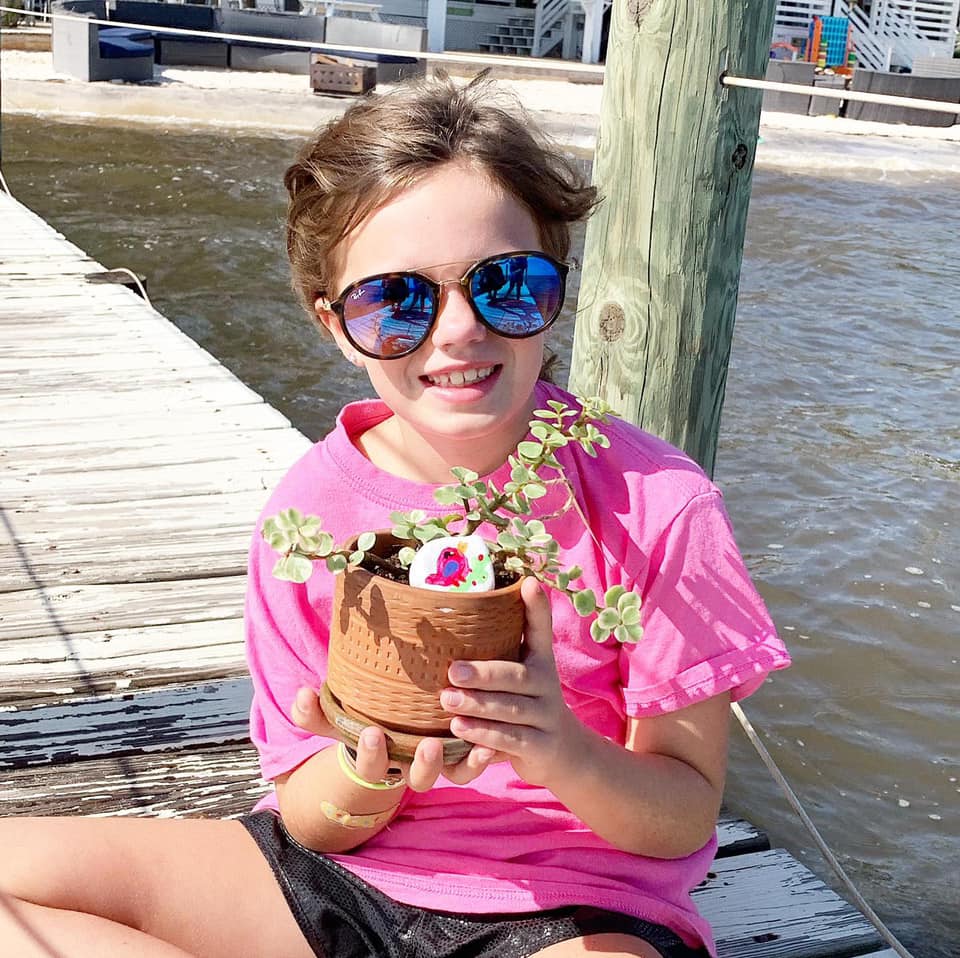 For the past month, the graduate of Mississippi State University has had almost as much fun as all the “finders, keepers.”

Here’s how it works:

— The family’s low-key scavenger hunt happens about once a week.

— It begins with a photo of the free giveaway in its location, often a recognizable spot. The snapshot “clue” is posted on the Facebook page. 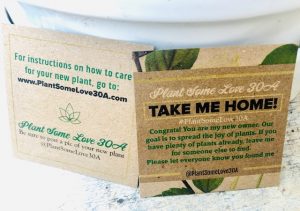 — Some people go seeking, or they just stumble upon a tiny potted gift that says, Take me home!

— Usually, it’s found within a few hours. A day or two at most.

— Each plant comes with a special tag.

Robert said the idea came from a New Orleans artist who was sculpting cool little skulls. He painted them all kinds of colors, and he would hide them all over the city.

“I thought that was neat. We used to give away small plants very often as student-teacher gifts, or to friends,” he said. “Now we’re in a newer place, and before we knew it, we just ended up with a lot more on hand. So this came to mind.” 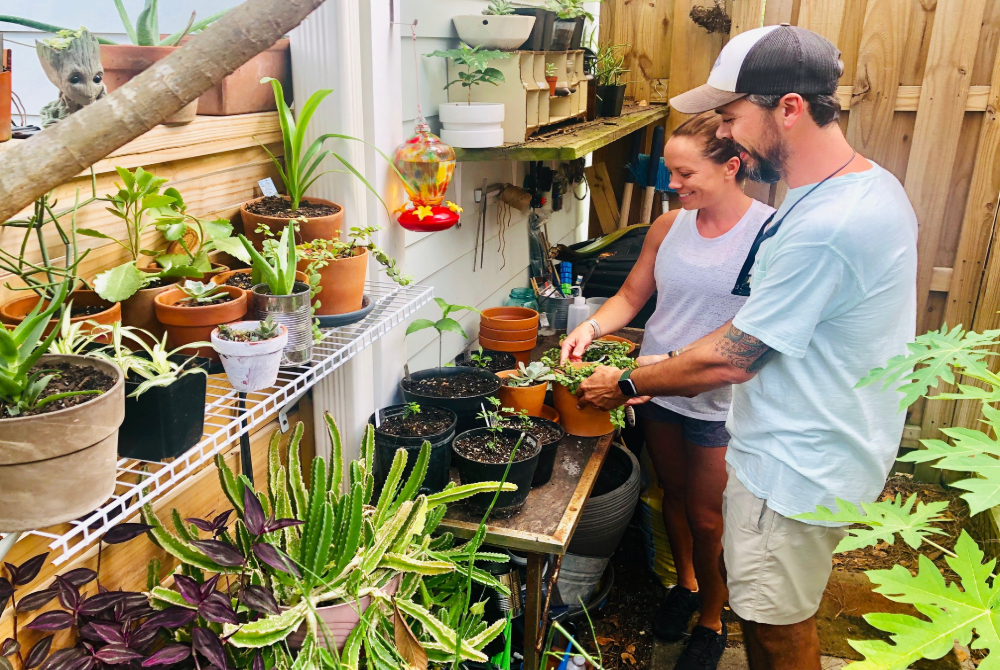 The best thing about this scavenger hunt is that you don’t have to be on social media to participate. A visiting couple found one in Seaside—on the same day as their 23rd wedding anniversary!

Roberts vacationed on the Emerald Coast as a kid. Later, after starting a family, they often stayed at the beach condo of his best friend’s parents. That same friend is now his business partner, and next-door neighbor, in South Walton.

The family of four took root here in 2016 from Indianola, Mississippi. Since 2007, Roberts has been the co-founder of Lost Pizza Company, which now has 16 locations across Mississippi, Tennessee, and Arkansas. There’s also a location in Pensacola, and they’re scouting for a future spot in Walton County. 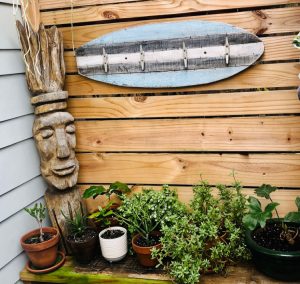 Roberts has two potting benches—one on either side of his tidy patio that’s fenced in, with just 100 square feet of actual dirt in the ground.

He’s proof positive that anyone, including an “expert,” can garden in any kind of space.

As the social media following takes off, the family said the clues might get harder. For now, it’s a fun family activity that sparks everything from imagination to some easy geography lessons.

“We have used really nice containers that people give us, and we’ve found a lot of second-hand containers. We’ll come pick them up if people contact us,” said wife Jenny. “Our daughter, in third grade, starting adding her painted rocks to some of them for fun, too.”

If you needed another excuse to plant yourself outdoors and take a stroll, or come visit 30A—now you have it!

KELLY LAYMAN is a Walton County resident who owns a state-certified sustainable Longleaf tree farm. Her current favorite plant is milkweed. For fun, she runs #LeMonarchHotelof30A in her back yard, which has attracted more than 200 Monarch caterpillar eggs so far in 2019. She protects them from wasps and lizards, feeds the caterpillars, then releases the butterflies when they “e-close” from a chrysalis. The entire process takes about 3-4 weeks each cycle.