At 5 o’clock the lights dim, the kitchen hums and the show begins at Restaurant Paradis in Rosemary Beach.

Each moment of service is orchestrated, from the welcome at the front door, to the flawlessly timed courses, to the thank you upon exit. As co-owner Danny Cosenzi said, “Complacency is our biggest enemy.” And that meticulous attention to detail is evident night after night as seasoned servers describe dishes down to the herbs in sauces and guide diners to the perfect wine pairing for that cast iron filet that’s won “best steak on 30A” repeatedly.

Speaking of the filet, Manager Kimberly gushed, “the sear gives that crunchy texture on the outside, but then it just melts in your mouth on the inside. That black truffle sauce…pour it in a cup, give me a straw and I could drink that all day.” 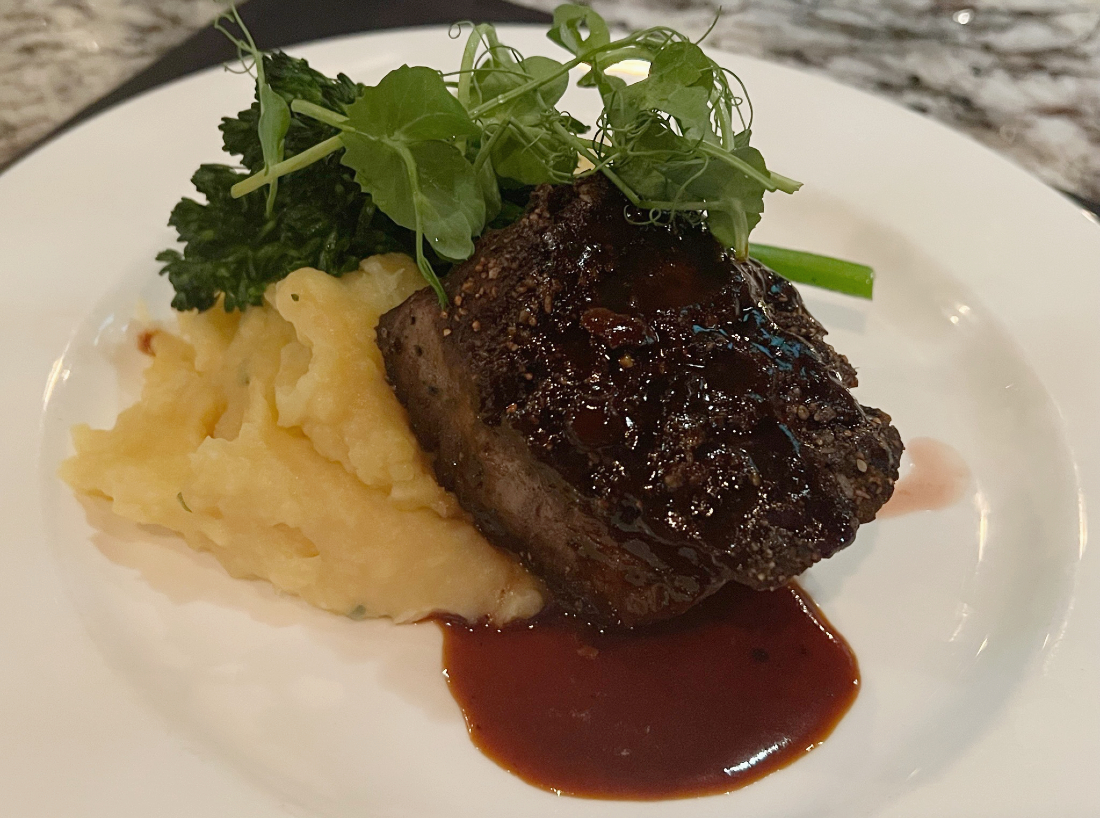 The steak at Paradis

Kimberly is a big part of that attention to detail. She started as a back waiter eight years ago, pouring water and clearing plates. She worked her way through host, and eventually, manager. “I liked working behind the scenes. Talking to new people really scared me. But the more you put yourself in uncomfortable situations, the more comfortable you become. I’ve never worked for another business that looked out for their employees the way this business does, and that’s what kept me here. It starts from the top—it really is the family atmosphere here, not just for our guests, but for our staff as well,” Kimberly said.

She’s not the only one keeping the show running. General Manager Mike started on day one, eight years ago. The same chef has said grace over the menu since that opening day in March 2014. The Level 3 certified Sommelier has called the restaurant home since the beginning.

Seven married couples work at Paradis. Even the kids get in the act—Mike’s 14-year-old daughter lends a hand when staffing is short and Kimberly’s son has been toddling around the dining rooms since he could fit in a walker. 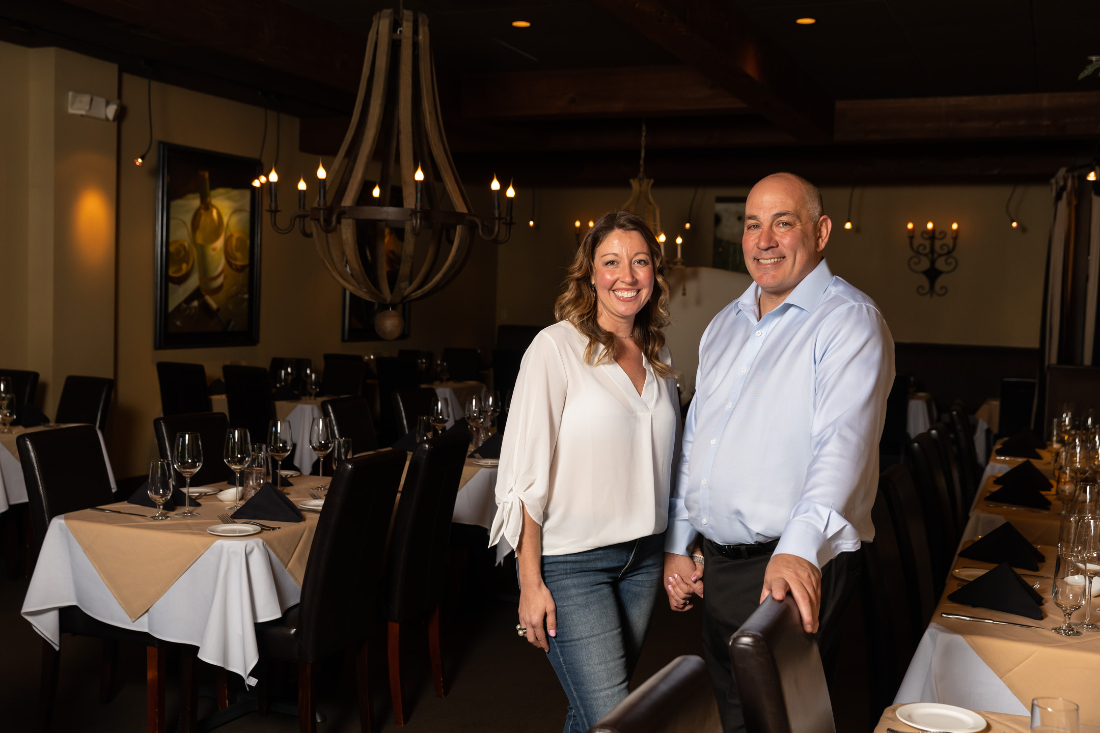 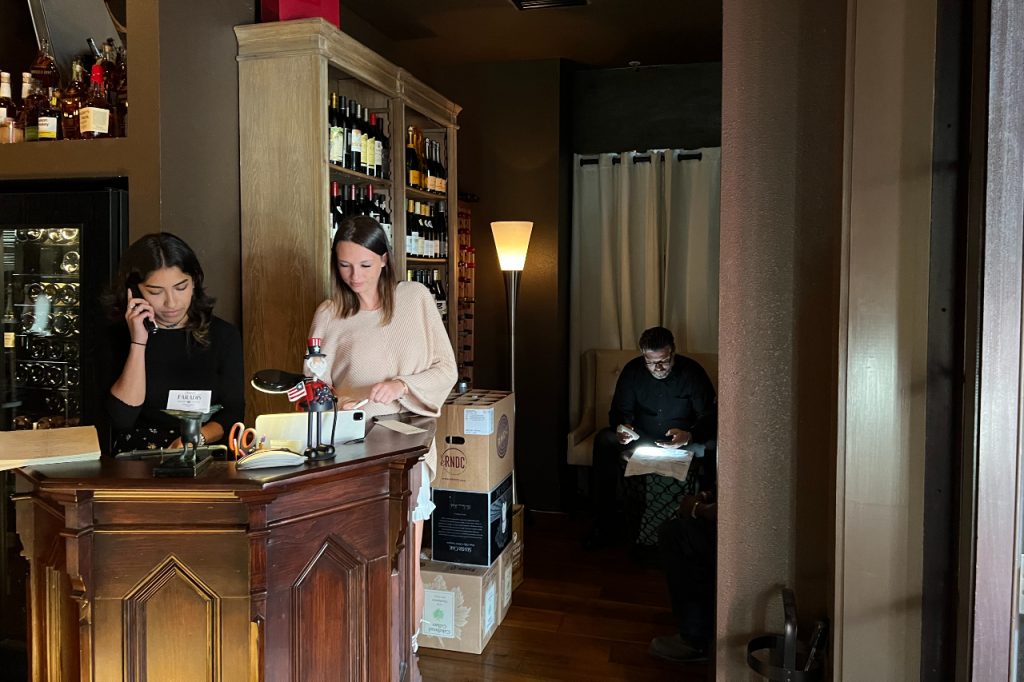 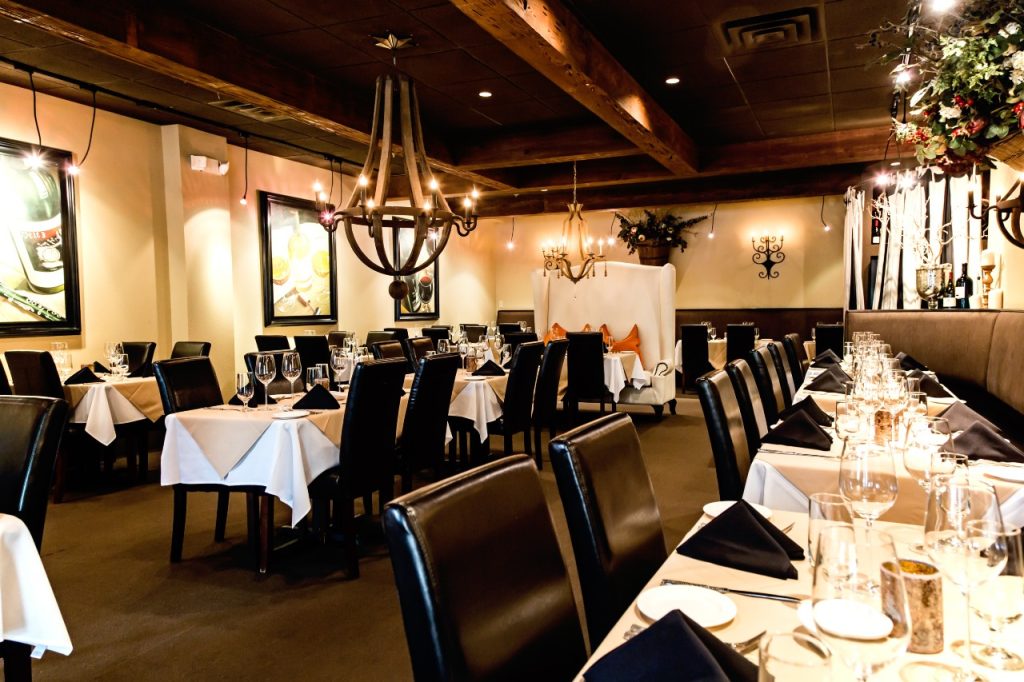 Through hurricanes, a pandemic, and explosive development, Paradis’ family has weathered the storms, putting out exquisite coastal cuisine with a warm welcome.

On a recent Saturday night, I experienced firsthand the dinner show. Greeted at the door by Kimberly (who also took my reservation), I entered the world of soft lighting, rustic wooden beams, and black wrought iron accents. The white leather banquette felt luxe as server Steven explained the specials. All the details, from beautiful hammered stainless steel cutlery to generously-ballooned wine glasses to the well-curated wine list, attended to.

The lightly-battered softshell crab initiated act one with co-stars of tender hunks of lump crab atop a bed of arugula, drizzled with light lemony bernaise, everything treated well. Act two brought the burrata paired with a mix of juicy red and yellow heirloom tomatoes, chiffonade of fragrant basil, a dollop of nutty pesto, and stripes of thick balsamic reduction and extra virgin olive oil. Each ingredient left as unadulterated as possible, speaking for itself.

Each course deftly paced by Steven; waters filled, wine replenished, silverware switched out with ninja-like stealth by a chorus of back waiters. 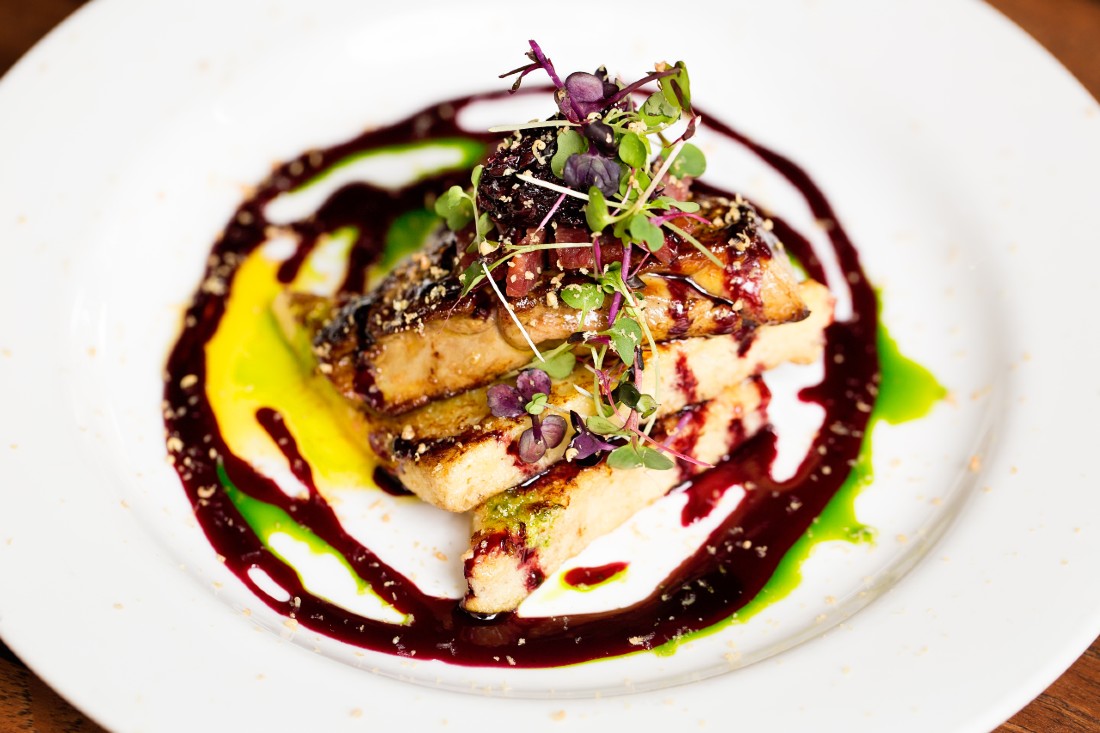 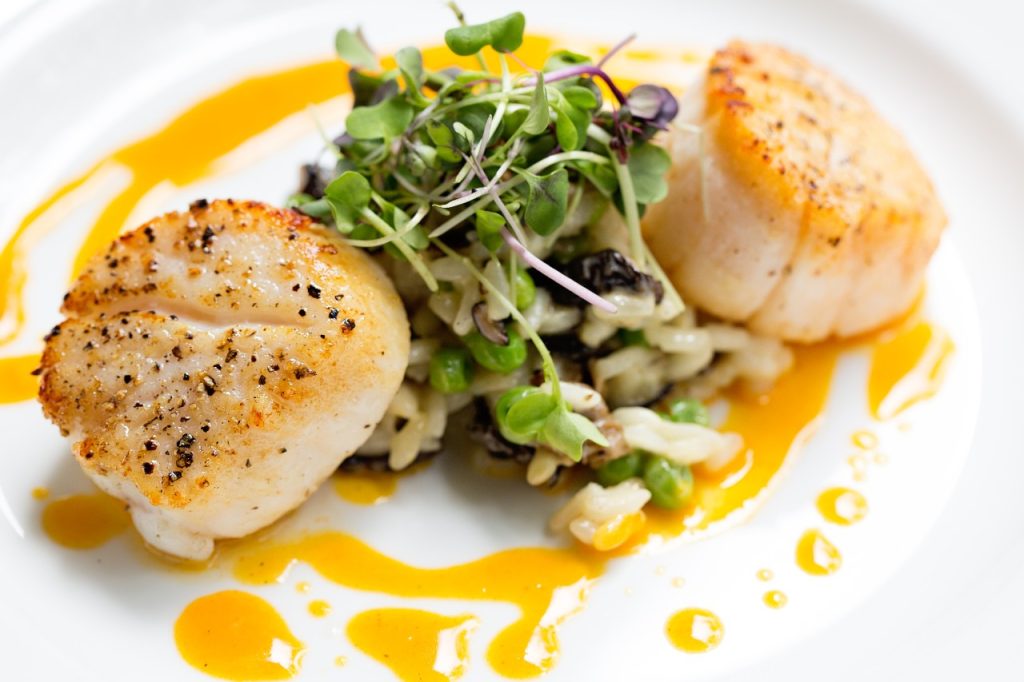 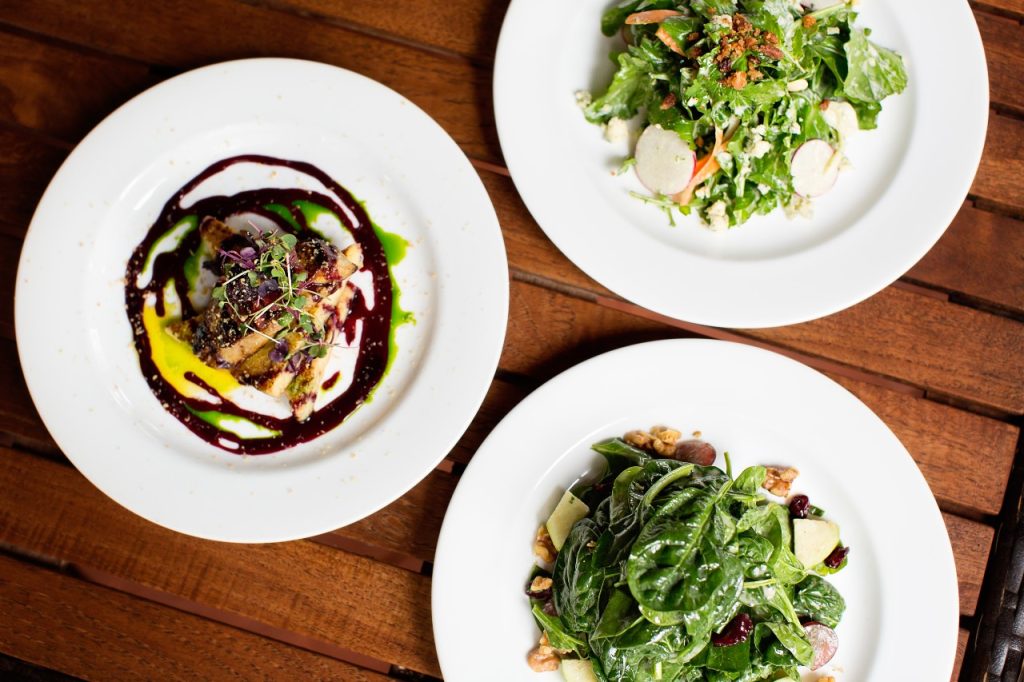 The show closed with velvety-soft dark chocolate creme brulee garnished with marinated dark cherries, a fitting final curtain. The crack of the bruleed crust satisfied as I dug in for a spoonful. As I passed the host stand on my way to the door, a friendly face asked how everything was and thanked me for dining with them as she opened the door.

That commitment threads through their reservation-only policy, to controlling table load, to their hands-on pre-shift tastings to master every component and technique of the dishes. Danny elaborated, “Everybody has so much pride in what we’re doing…they aren’t just taking an order and we never sacrifice service or food for an extra dollar. It starts and finishes at the door.” 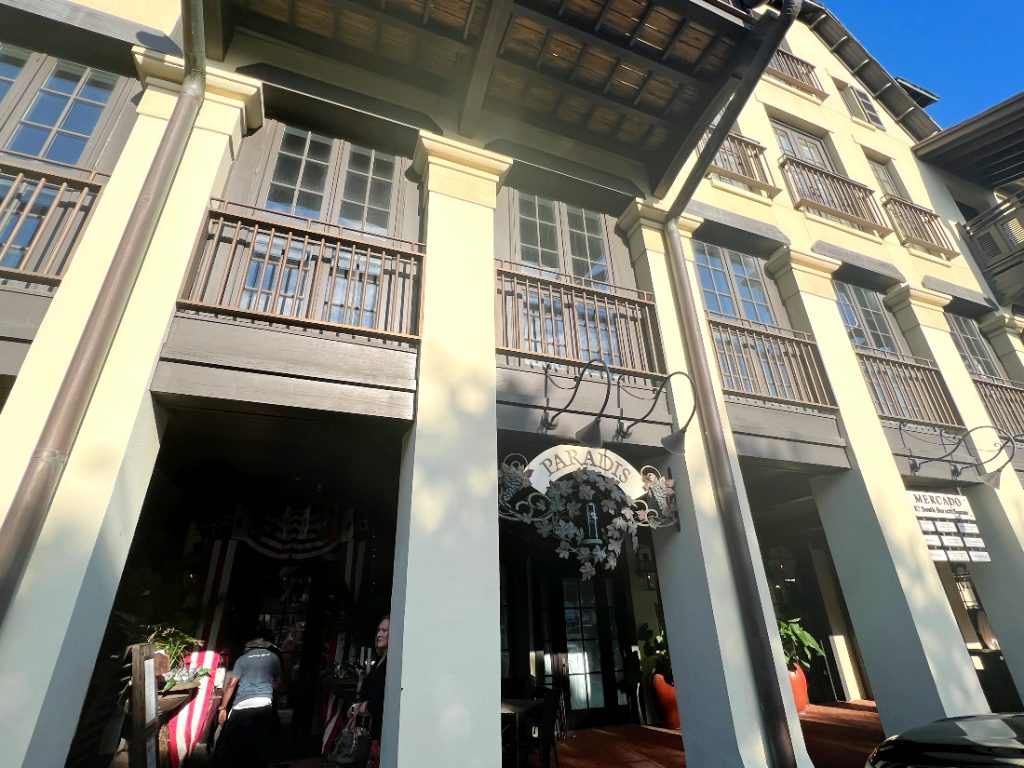 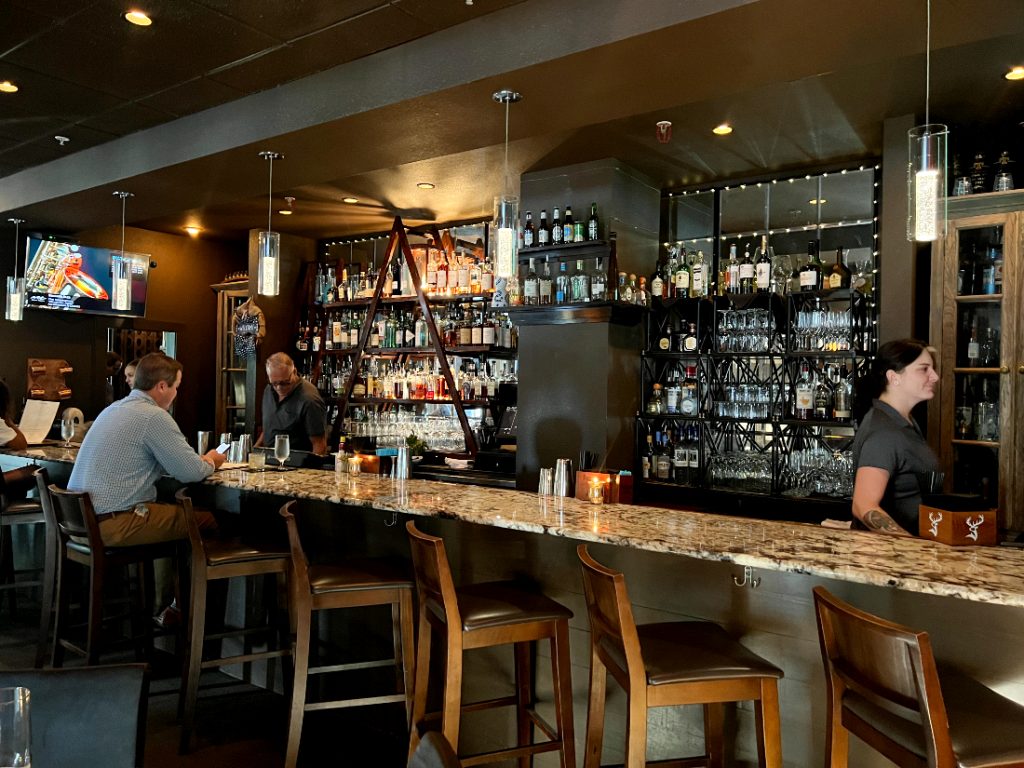