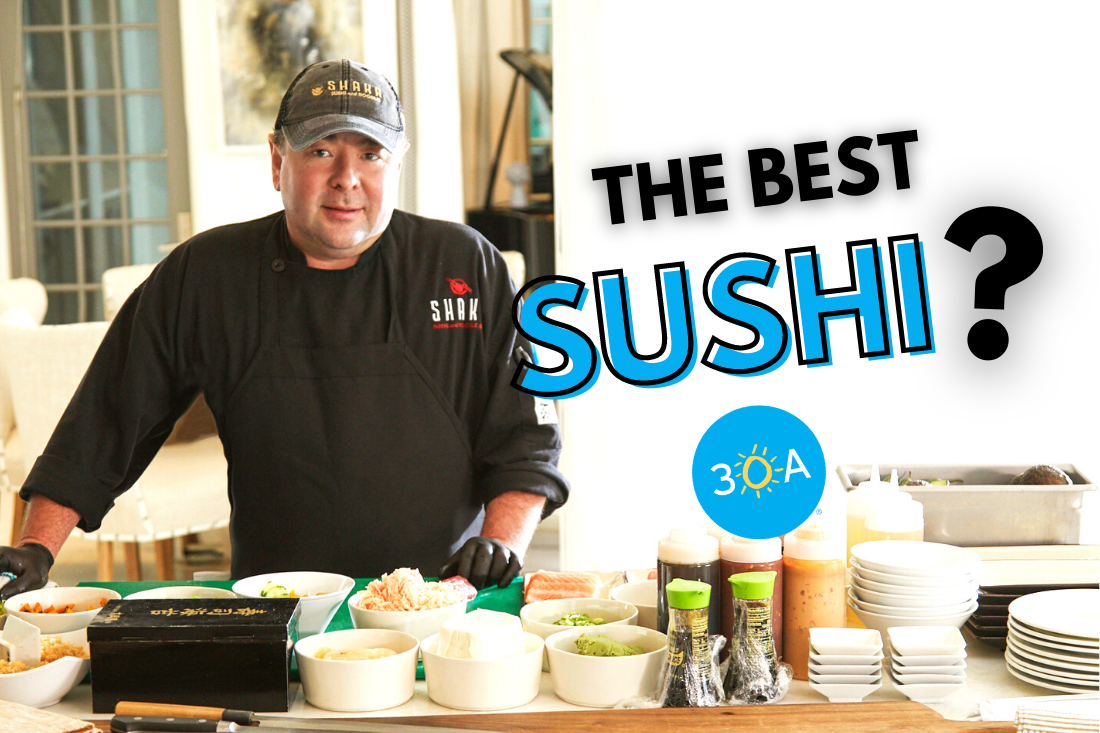 Sushi Chef James Sargent learned to shake a shaka while his dad was stationed at Kaneohe Marine Corp Air Station on Oahu. The reverence for ingredients and community he soaked up on the island traveled with him to Pensacola, Florida, where he started his sushi career at Yamato almost 40 years ago.

After a seven-month stint in construction, he found his way back to rolling fish when the guys from Last Call Restaurant Group lured him with the promise of a position at his dream concept doing what he loves.

In April 2019, James brought some aloha spirit and razor-sharp knife skills to Inlet Beach as Shaka Sushi and Noodle Bar opened its doors.

Shaka feels very organic. The light-colored wood, and rattan lampshades in the shape of jellyfish call the beach. Tumbled rock accent walls feel like smooth riverbeds. Open shelving showcases the enormous fish painting over the sushi station that looks like ancient Japanese woodblock art. Together they build a zen atmosphere where it’s easy to “hang loose.” 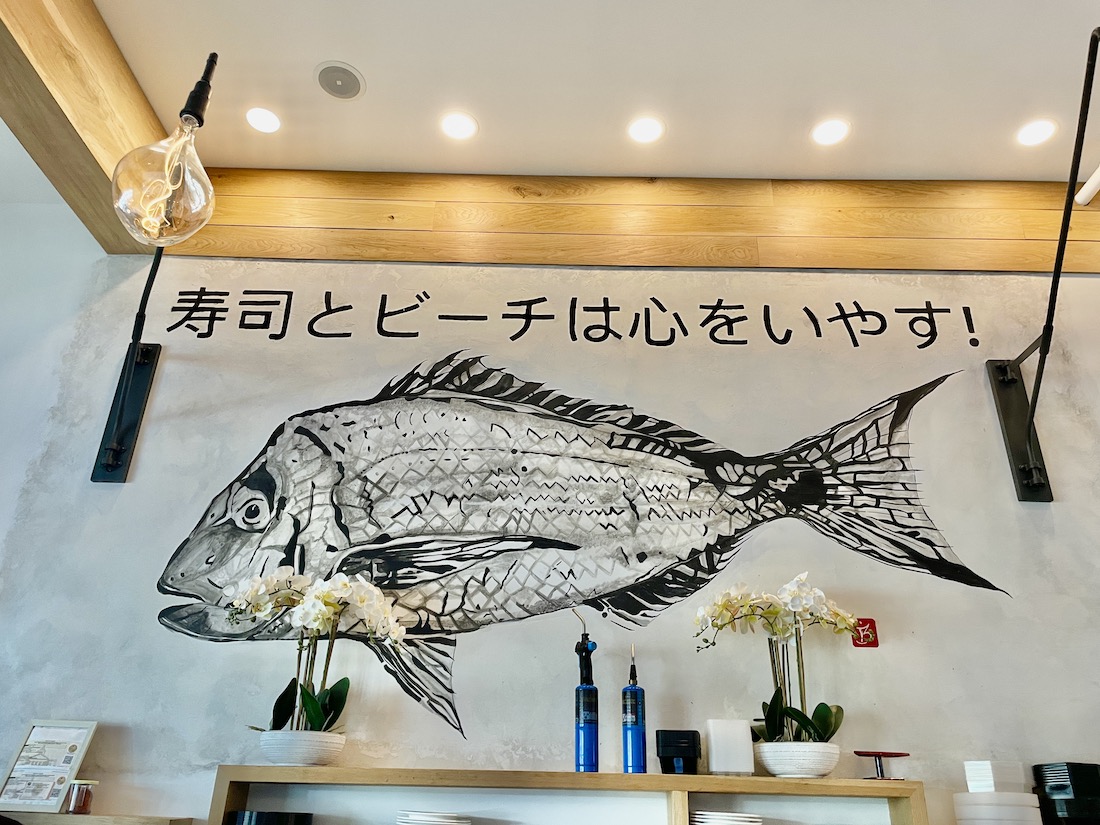 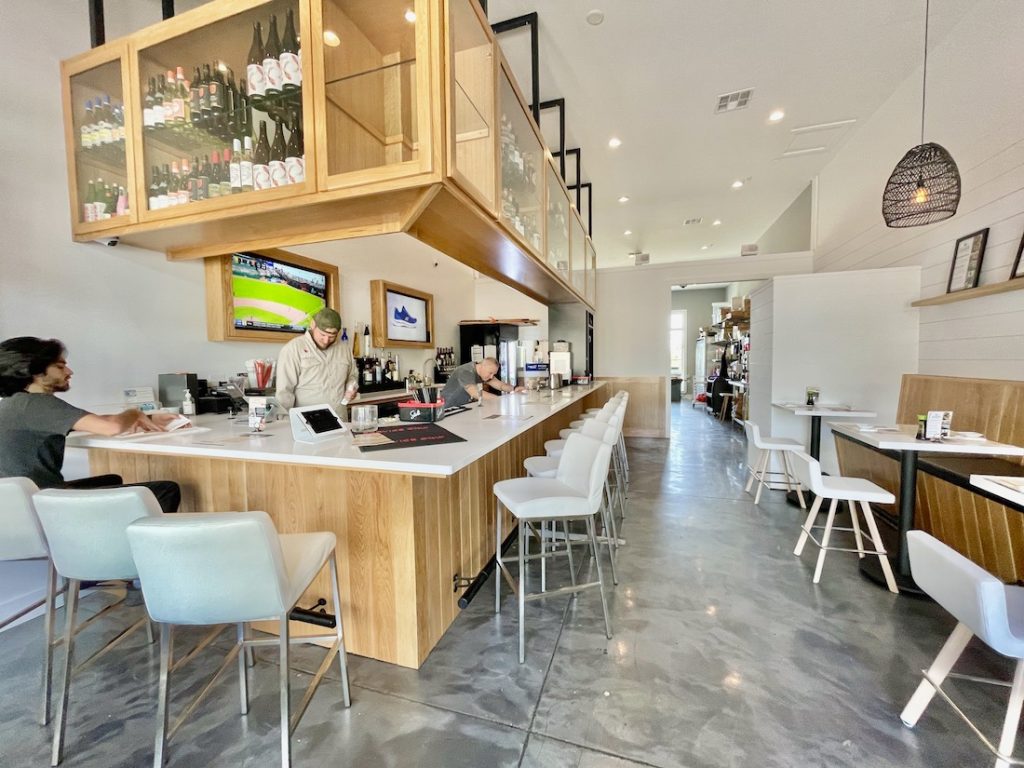 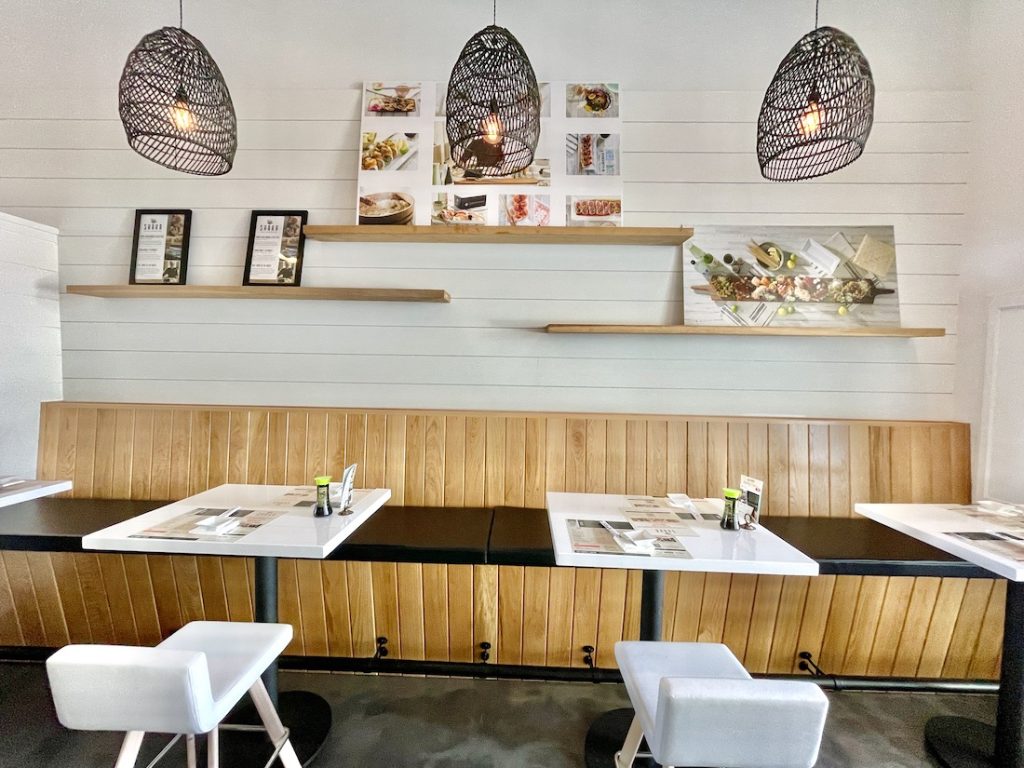 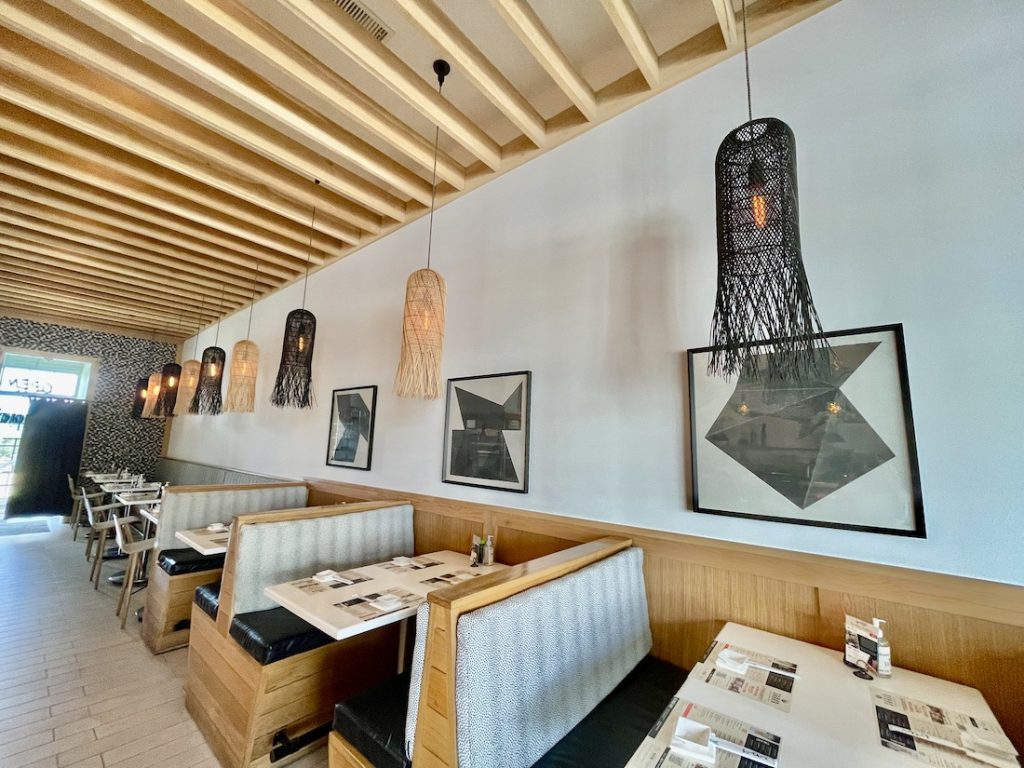 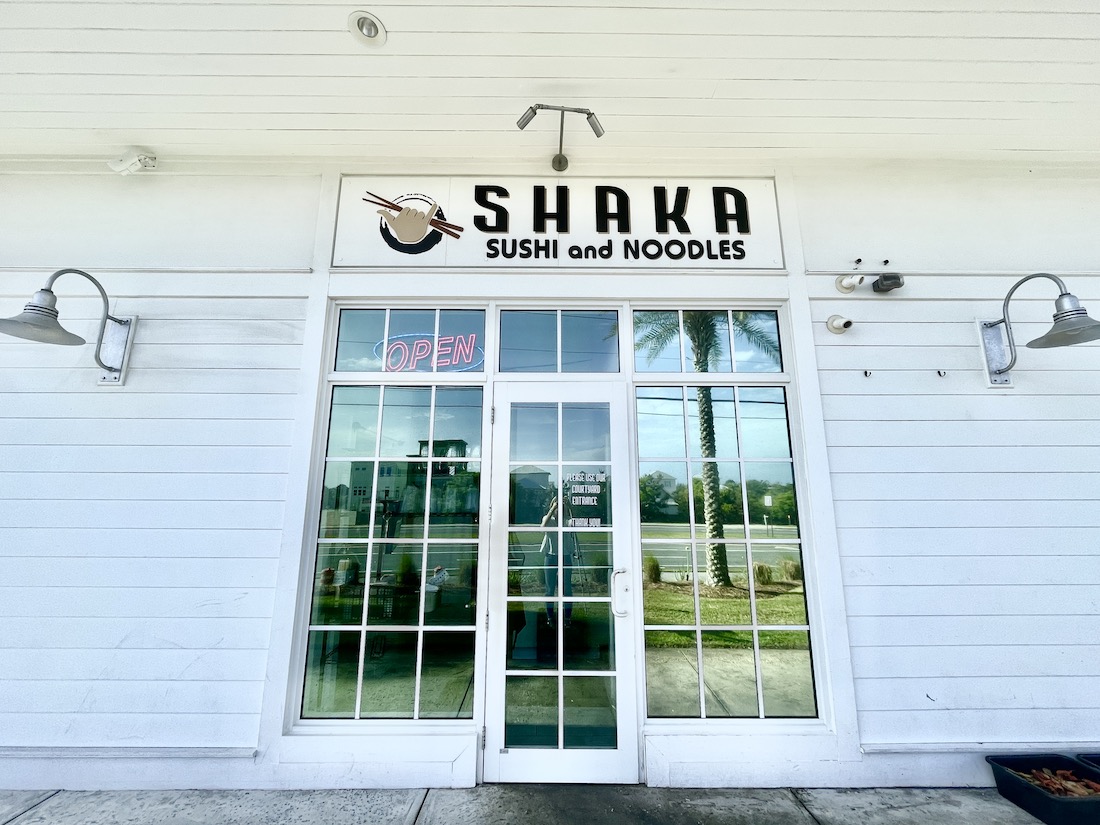 Though everything feels relaxed, there is precision evident in the details. The first clue came when server Amber, a bubbly pony-tailed young lady, described everything we asked about on the menu down to the smallest ingredient. “We have an extensive training program, and luckily we still have a lot of the same staff that we hired in the beginning,” says James.

The second clue arrived with the first course, a sampling of James’ signature sushi. A blue-black hunk of tuna tightly rolled with green onion, aioli, and the sushi rice was topped with a dusting of togarashi. That touch of togarashi, a fiery Japanese chili powder, ignited the roll. The aptly named Endless Summer, refreshed our palates with bits of bright lemon and burst with the earthiness of a soy reduction sauce. The lemon was surprising, but the tempura flakes inside provided a genius texture move. And the fish…fresh doesn’t do it justice. The fatty salmon, oily tuna, and buttery yellowtail served as sashimi (without rice) taste like fish candy for the senses.

But the star is the Morimoto—paper-thin hamachi layered with fiery serrano slices drizzled with ponzu sauce hits all the salt, fat, acid, and heat.

“I watch customers when they’re eating, and I can see their reactions. I want them to taste the freshness of the fish. I arrive early in the morning to receive, process and cure fish. People know when they come there, it’s going to be fresh. They always can count on that,” says James. Right now customers can find the holy trinity of salmon, tuna, and yellowtail, but pretty soon some Hawaiian-sourced fish will be on the menu, like the king of fatty tuna, Big Eye. 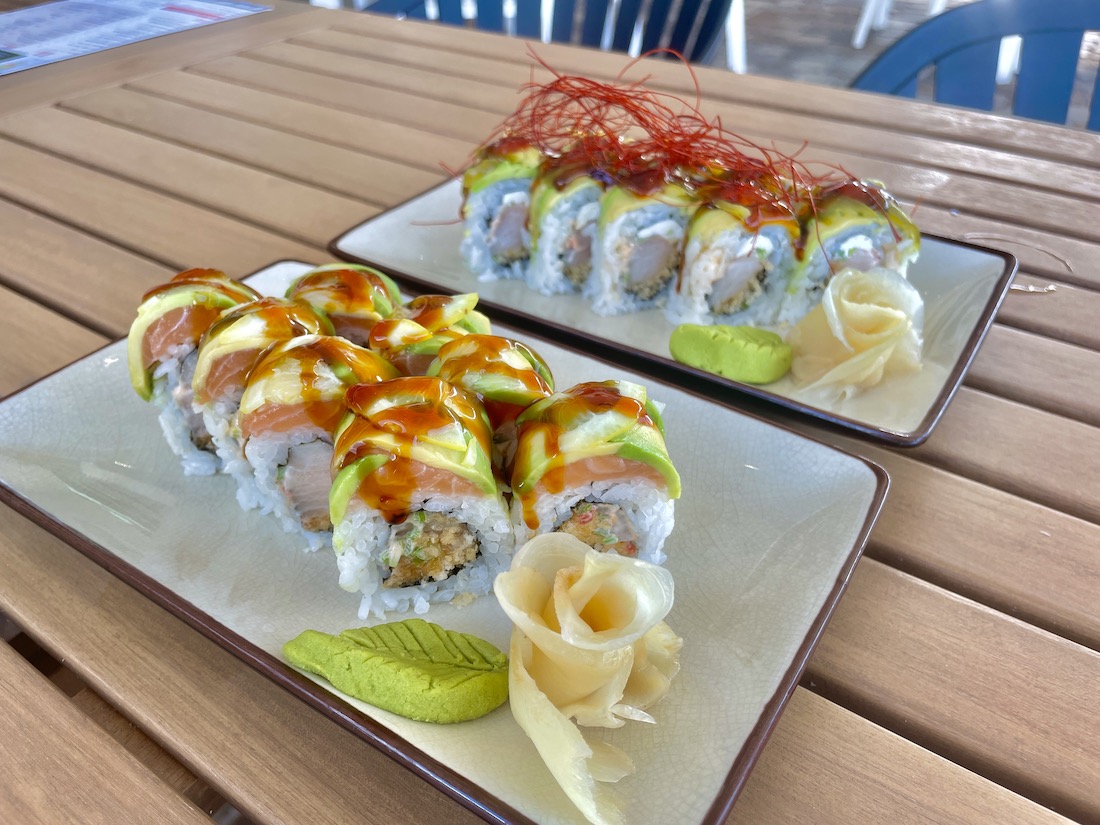 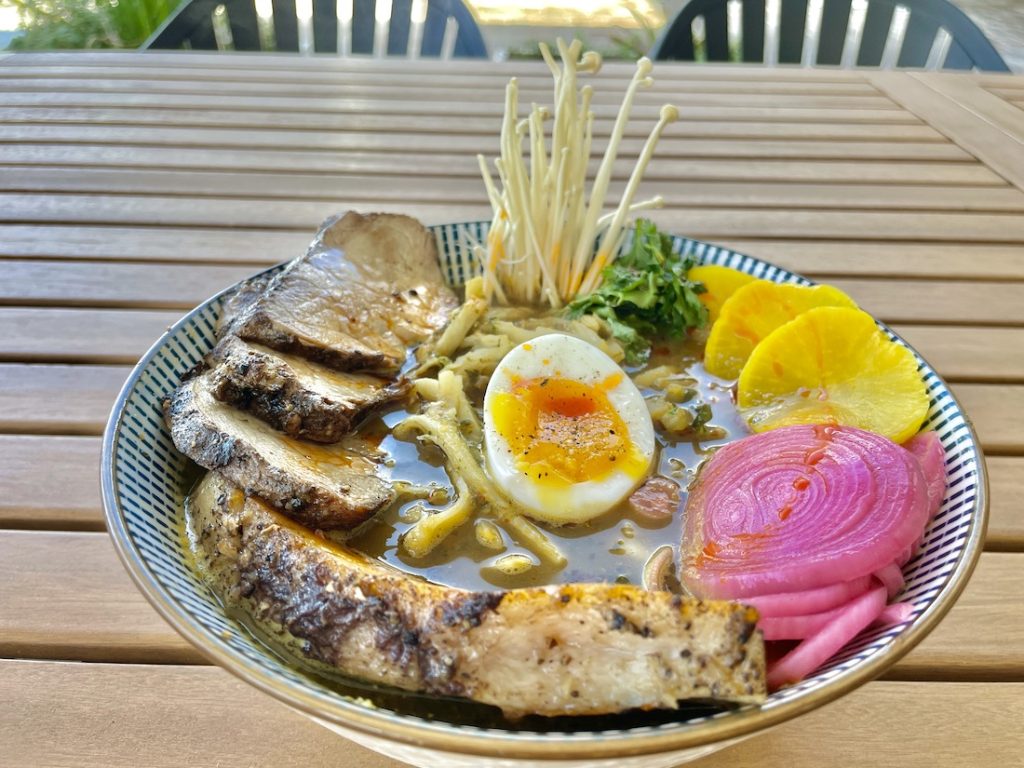 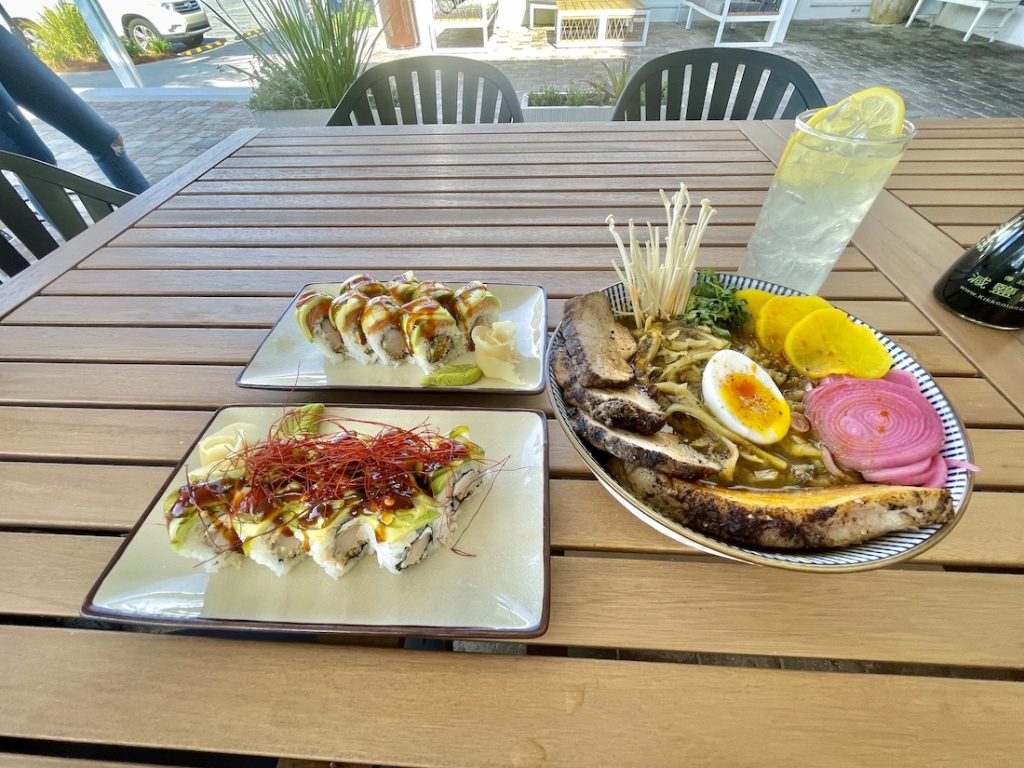 And the island influence extends to the non-fish menu items like the Kalbi Beef Short Ribs, a staple in Hawaiian households. Then there’s the Bodhi Bowl, a steaming portion of rich broth, crispy pork belly, and soft pork tenderloin crowding in with clusters of enoki mushrooms, fragrant cilantro, and a bevy of pickled vegetables. The egg on top has the perfect level of softness, allowing the yolk to mingle with the broth, making it silkier. Each item carefully selected to build flavor, showcases thoughtful attention to detail.

Another exercise in thoughtfulness is the menu selection. After working at restaurants with expansive sushi menus, James knew he wanted to do less, executed flawlessly. “A lot of places try to do too many things. We have our nine signature rolls, and seven classic rolls, but that doesn’t mean we can’t make something the customer is looking for, if we have the ingredients. It does mean we don’t overload ourselves with prep items and sauces so we can spend more time perfecting what’s on the menu,” says James. 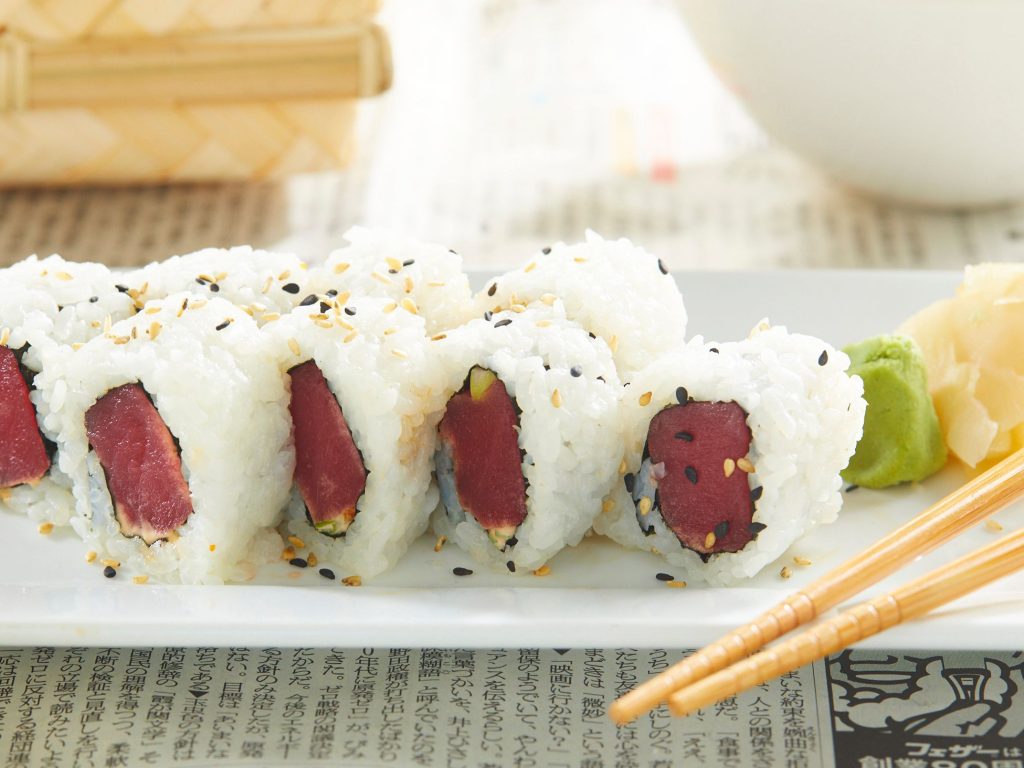 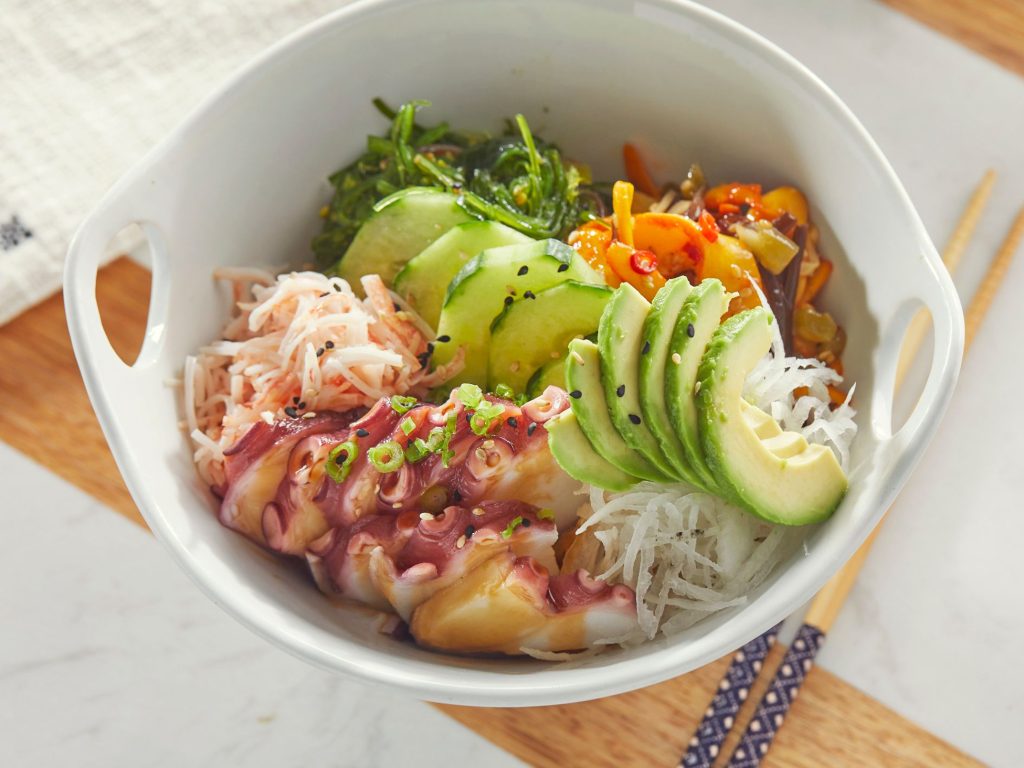 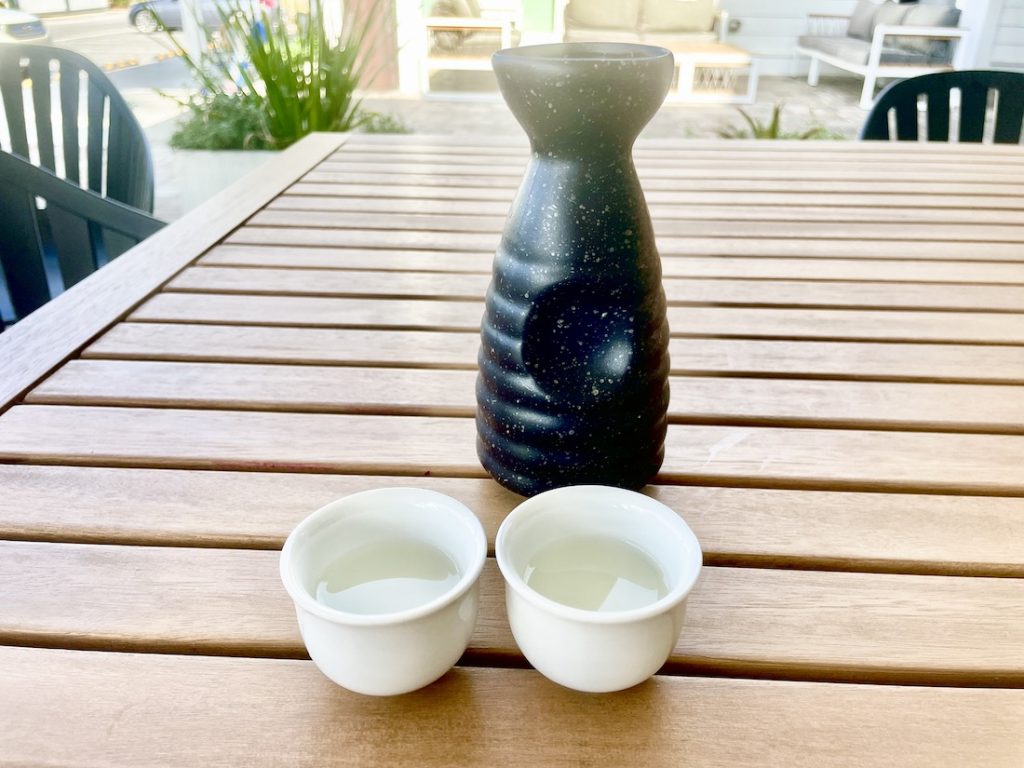 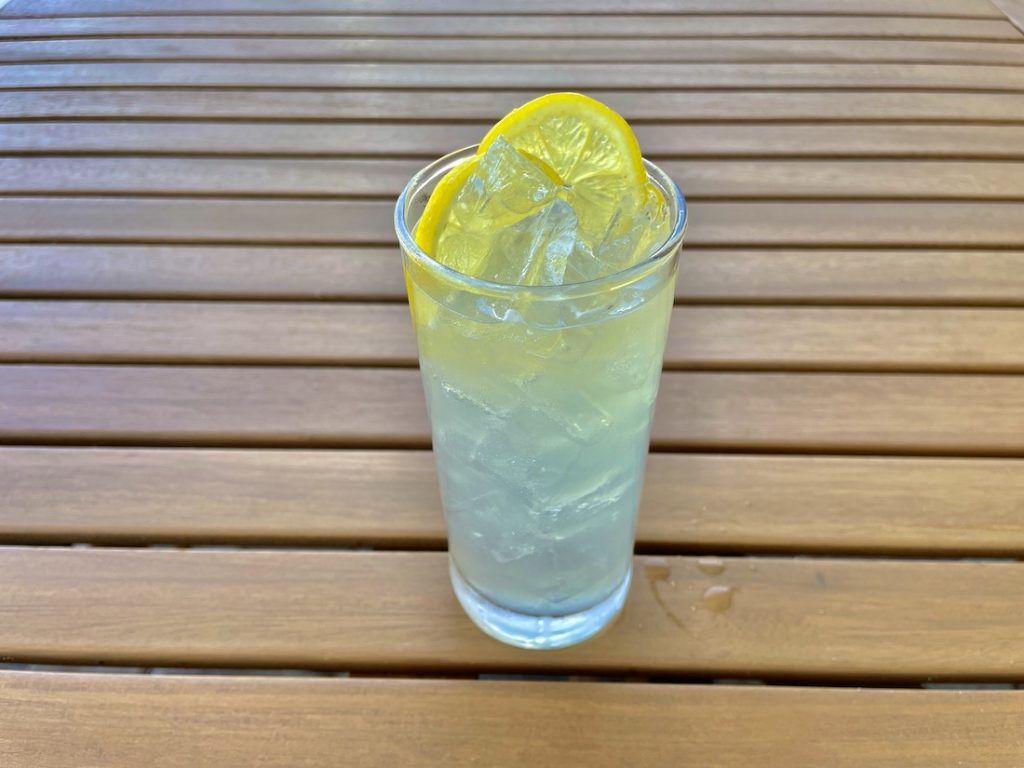 And if you’re feeling adventurous the octopus (tako in Hawaii) preparations stand out. As an appetizer, the meat is delicately charred, but tender still, bathed in a smoked chile soy sauce that delivers a tang without overwhelming the octopus. In the poke bowl, it stuns alongside ripe avocado, salty seaweed, slivered daikon, crunchy cucumber, and a mound of julienned krab. And it pairs perfectly with a Sake Drop—one of their inventive cocktails that riffs on the lemon drop with pickled ginger and fresh lemon, but with Tozai Typhoon Futzu, a sake with notes of banana bread, nuts, and hints of warm spice, rather than vodka.

Heading out full of fish and broth, I popped in next door to Shaka’s new side. The space (expanded into a grab n’ go market during the pandemic to help the huge influx of carryout business) recently received a major facelift. It now includes a bar and lounge area plus additional flexible seating, along with more takeout capability – you can still order ahead, pay online and pick up without fuss. There’s a little slice of Hawaii shaking its shaka on 30A. 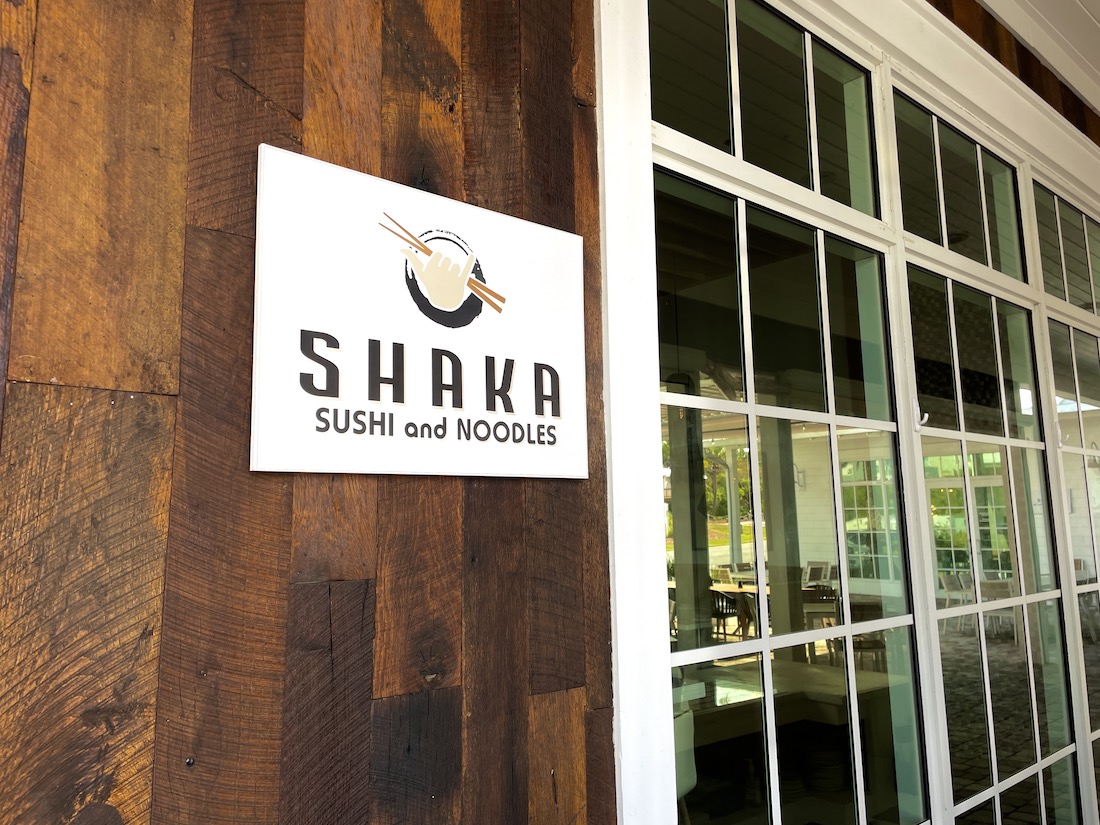