The Art of Surf: Turning Passion Into Art - 30A 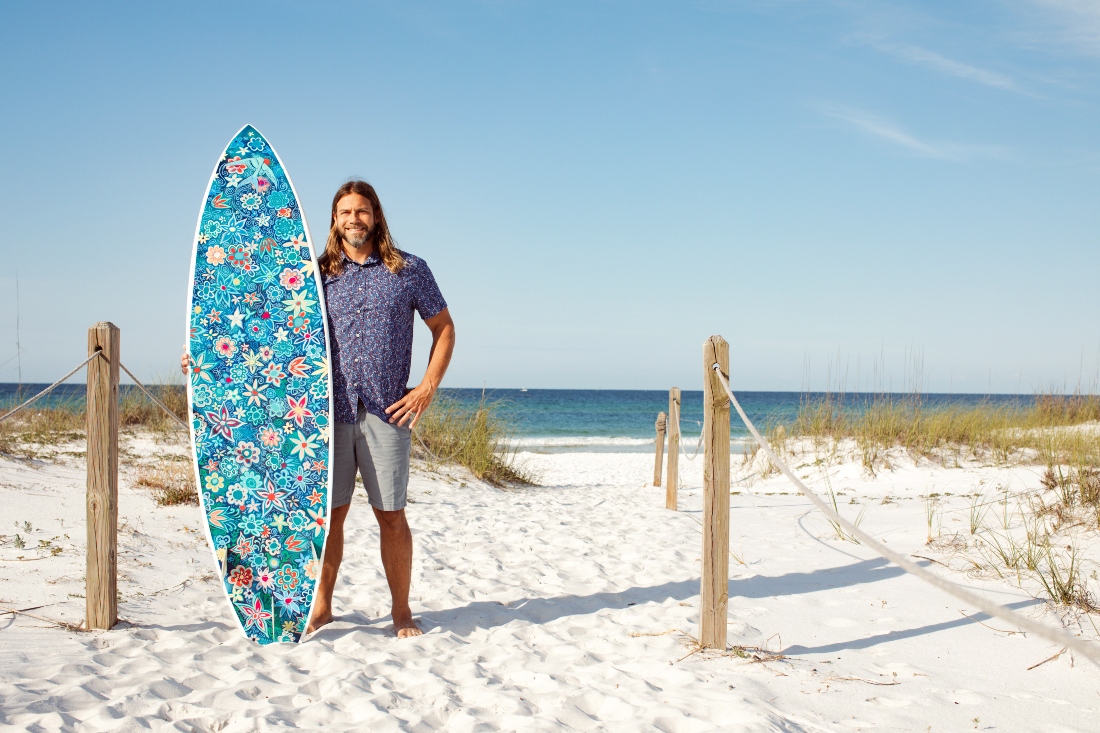 Man’s connection to water is a tale as old as time.

From the first centuries-old body surfers and reed riders to modern-day maverick chasers, humans have had a soulful union with the sea. From the ancient cultures of Peru to Polynesians as far back as the 12th century, humans have been fashioning watercraft to take to the waves. Ask any surfer and they will most likely be happy to tell you about the first time they stood on their beloved board and caught the crest of that perfect wave.

It’s a heady thing and true partnership, for without the surfboard, most people would lack that awe-inspiring ride high on the water.

Herein lies the heart of the inspiration for a select few surfers who have been compelled to express that deep connection by making stunning works of art out of their surfboards. 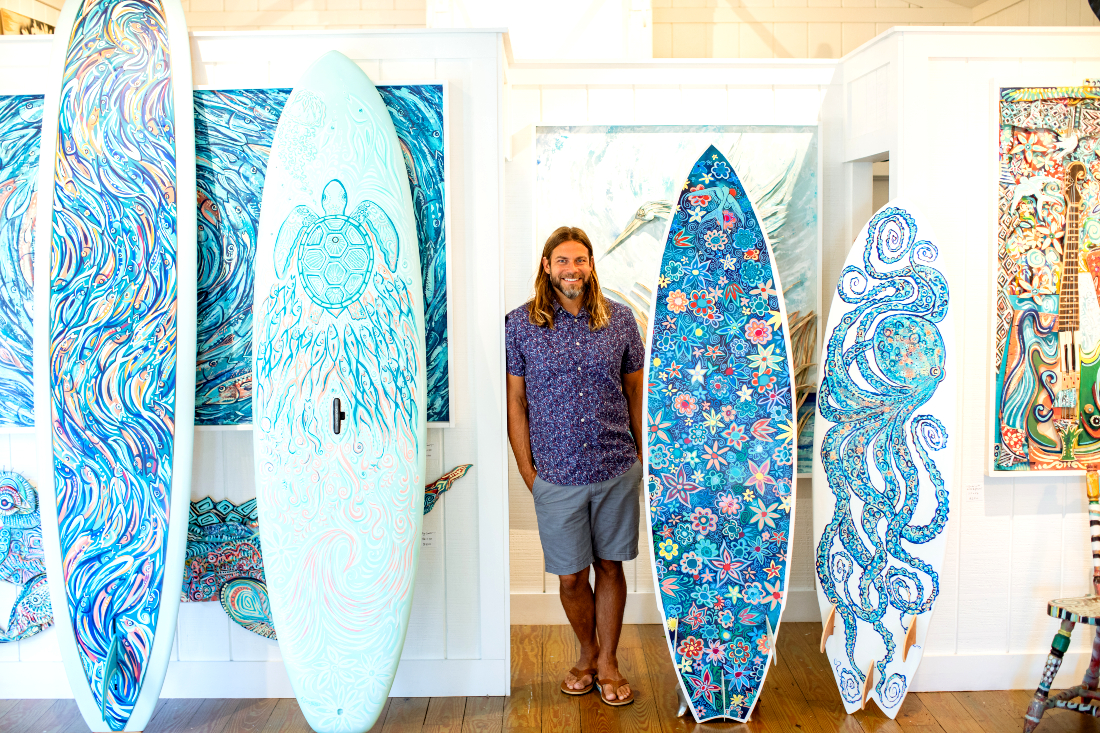 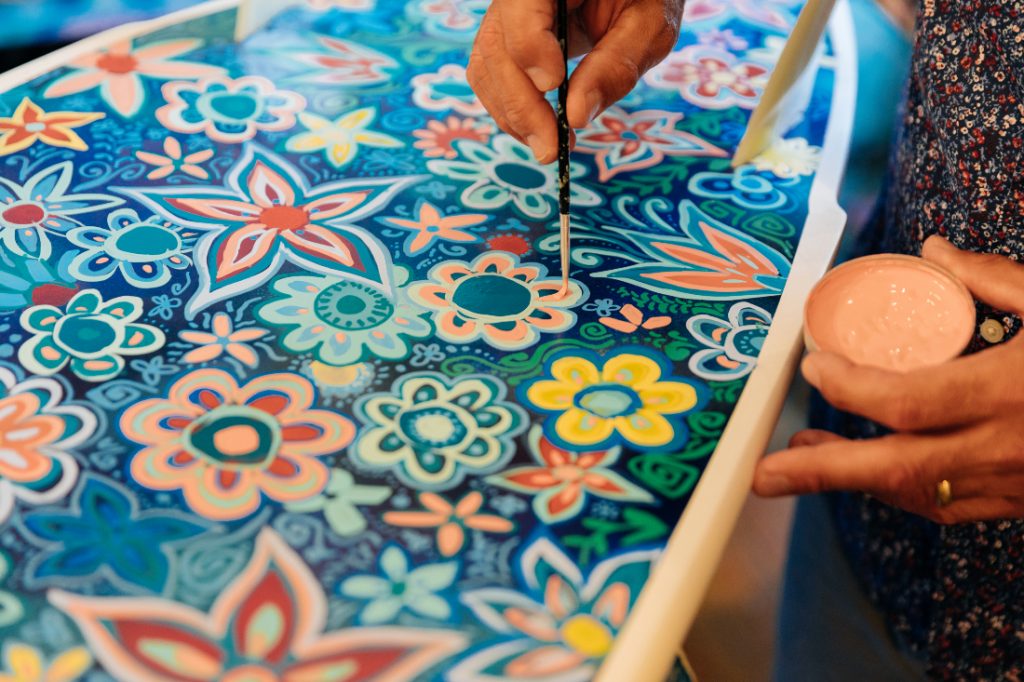 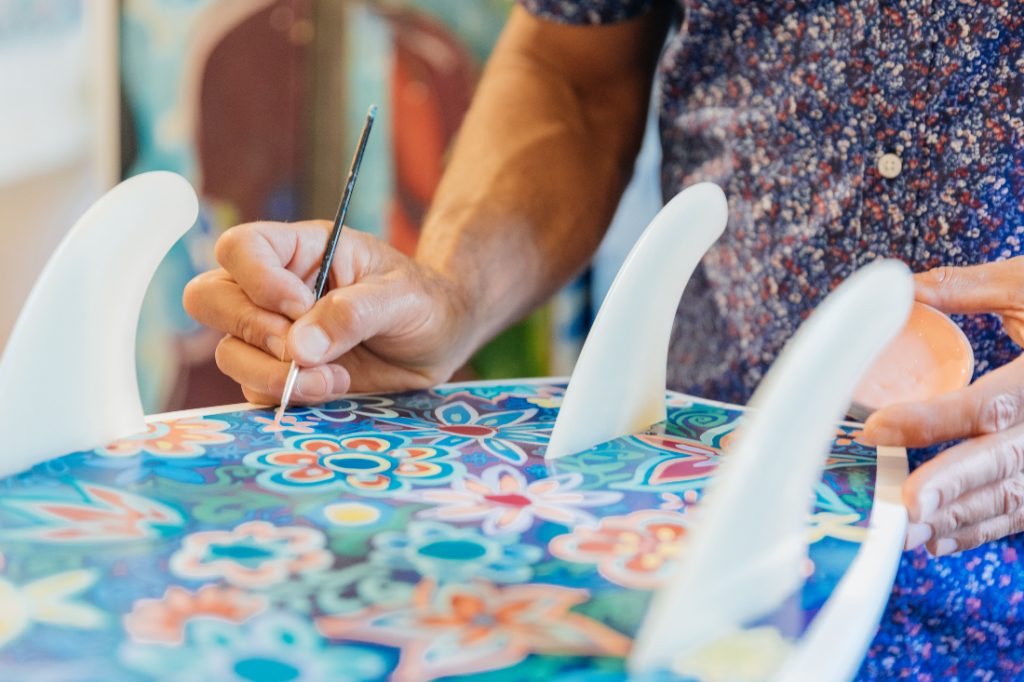 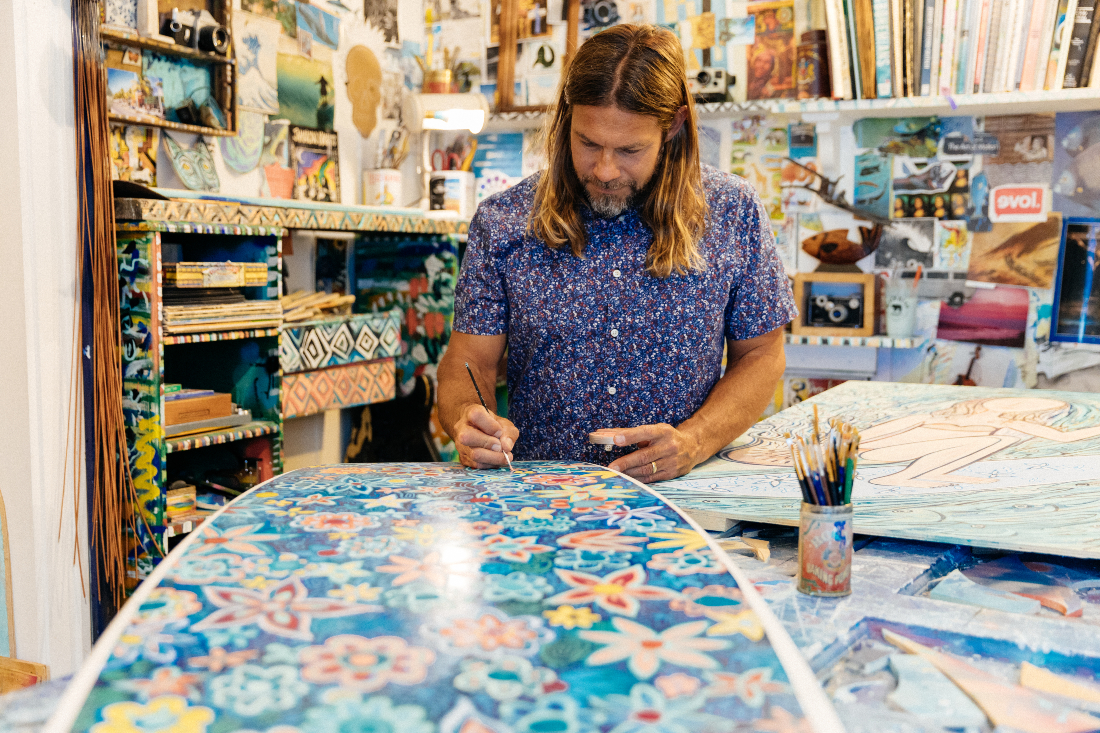 Long-time surfer and Florida native Andy Saczynski has literally carved out a name for himself in Grayton Beach, opening his gallery in 2012. Surfing since he was thirteen, Andy began his art career early. “I was always finding old materials to build things,” said Andy. It wasn’t long before he began using his old surfboards as canvases. Andy’s gallery also houses his eclectic workspace. Among the painted surfboards on display are works of fantastical art—unique pieces constructed of recycled, found, and collected functional objects.

You don’t have to look closely to notice the giant angler fish, but you might be surprised to see the old piano leg used for the main structure, the eye that is a functioning music speaker, and the dangling lure glowing with real light.

“There is so much sentimental value in the hours on the water and the amazing experiences each board has given me, so much joy and happiness,” he said. “If I can put that feeling onto a board in the form of art and pass it on to a collector, well, that’s just a cool thing.” 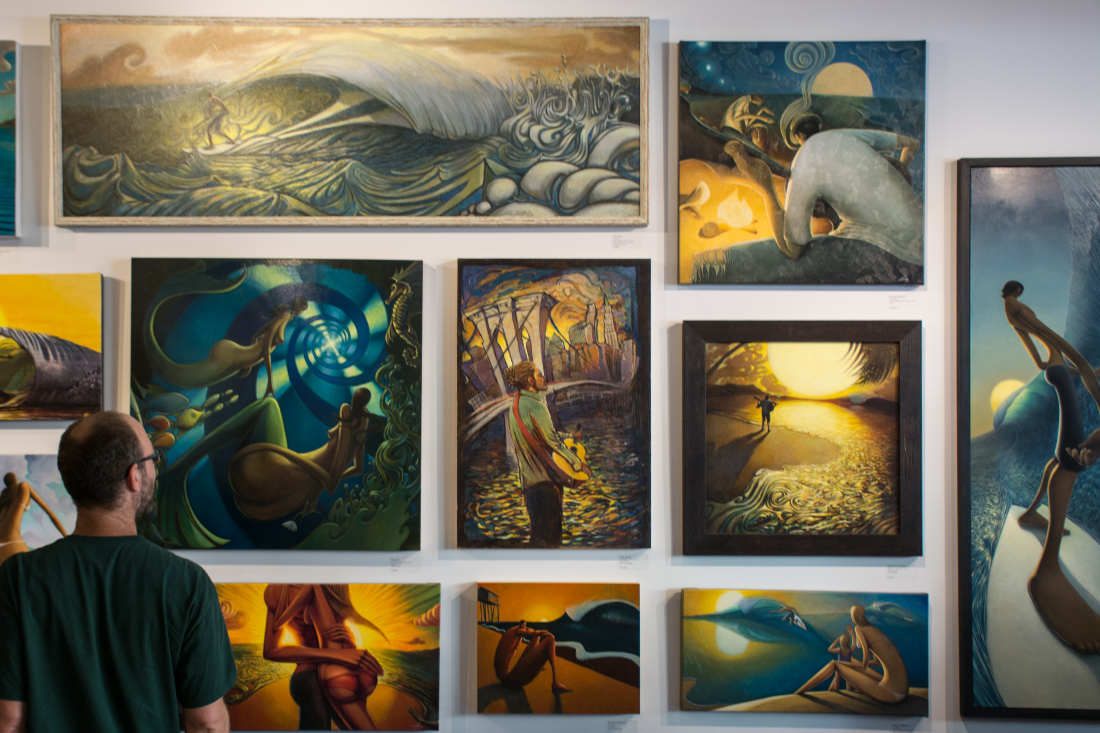 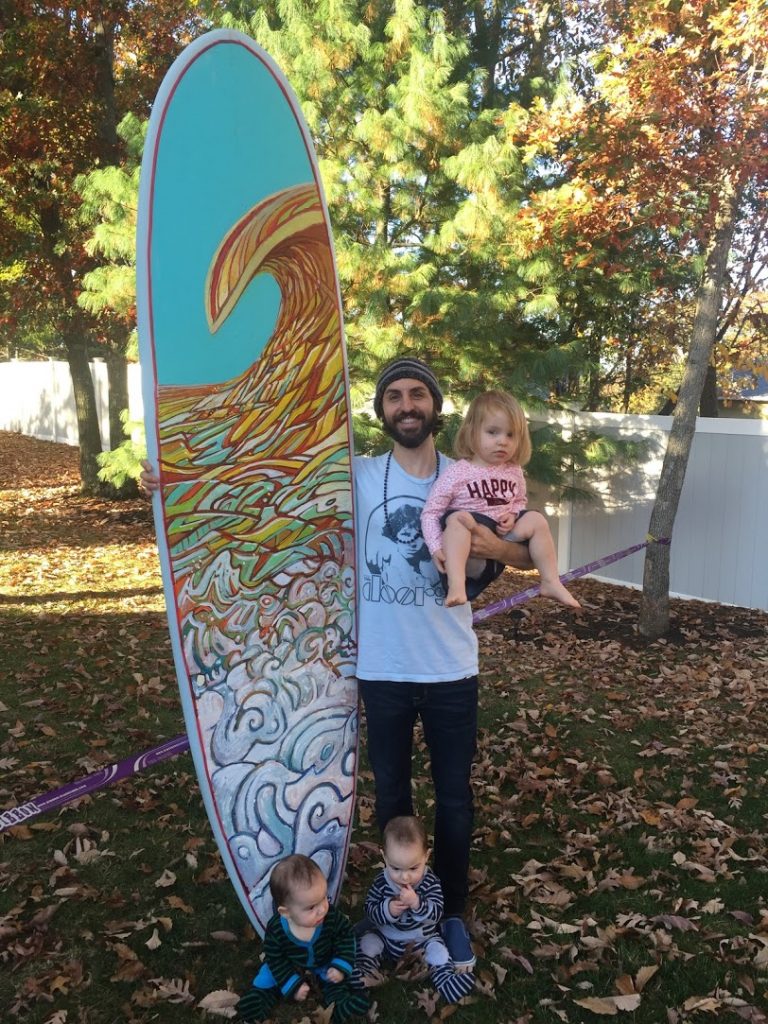 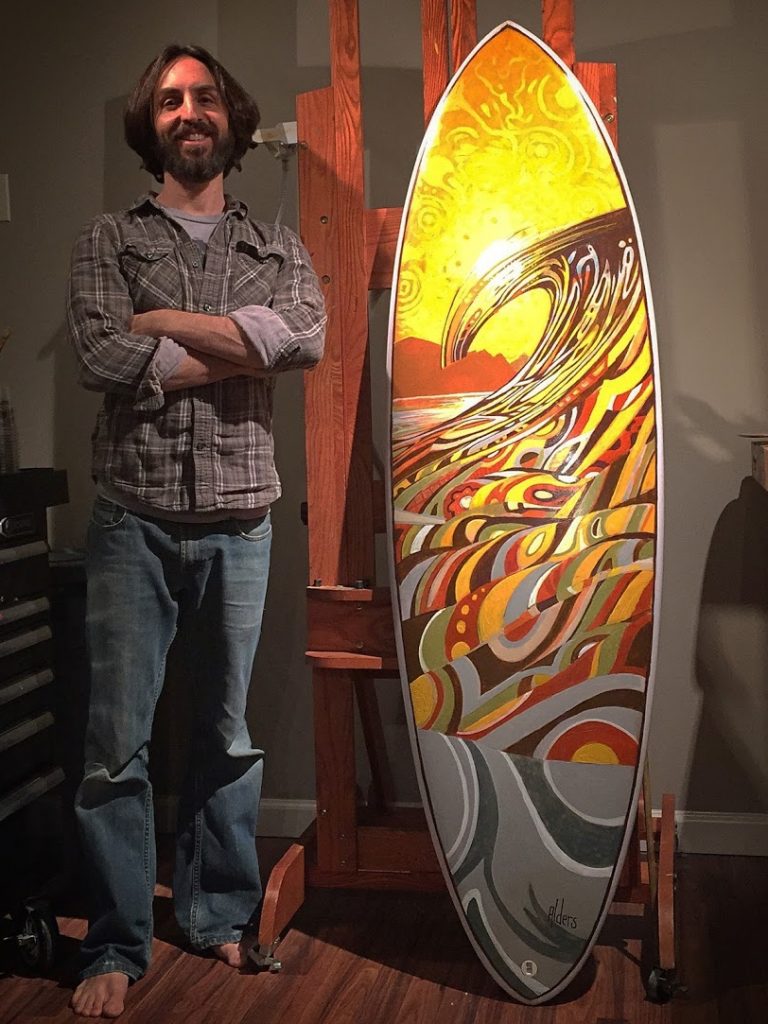 Jason Alders grew up in central New Jersey about 14 miles from the shore. He has also spent time in North Florida, and learned to surf at seventeen. He began drawing surfers and waves in high school. “As soon as I had a driver’s license, I was at the beach surfing or skimboarding almost every day.” Working with oils, acrylics, sprays, and airbrushes, Jason creates award-winning works known for bold lines, colors, curves and geometrics. Brazil’s popular Alma Surf magazine named him Surf Artist of the Decade, and he has done five album covers among other commissions and freelance work for big bands and brands. “My favorite, though, is just bringing my own visions to life.” Jay might be most well-known for his philanthropic work, donating art to help hurricane victims and spearheading campaigns to raise money for important causes. He says it’s an honor to be an ambassador for SurfAid and to donate a portion of his income to charities he believes in. “I am very much moved by those moments in life that make you look twice,” he said.

“People, shapes, light, and colors that replay in my mind might end up becoming a painting. I let my brush guide me most often. That’s what feels best.”

He currently lives not far from his childhood home with his wife and four children, about a mile from the ocean. He still surfs as much as he can. 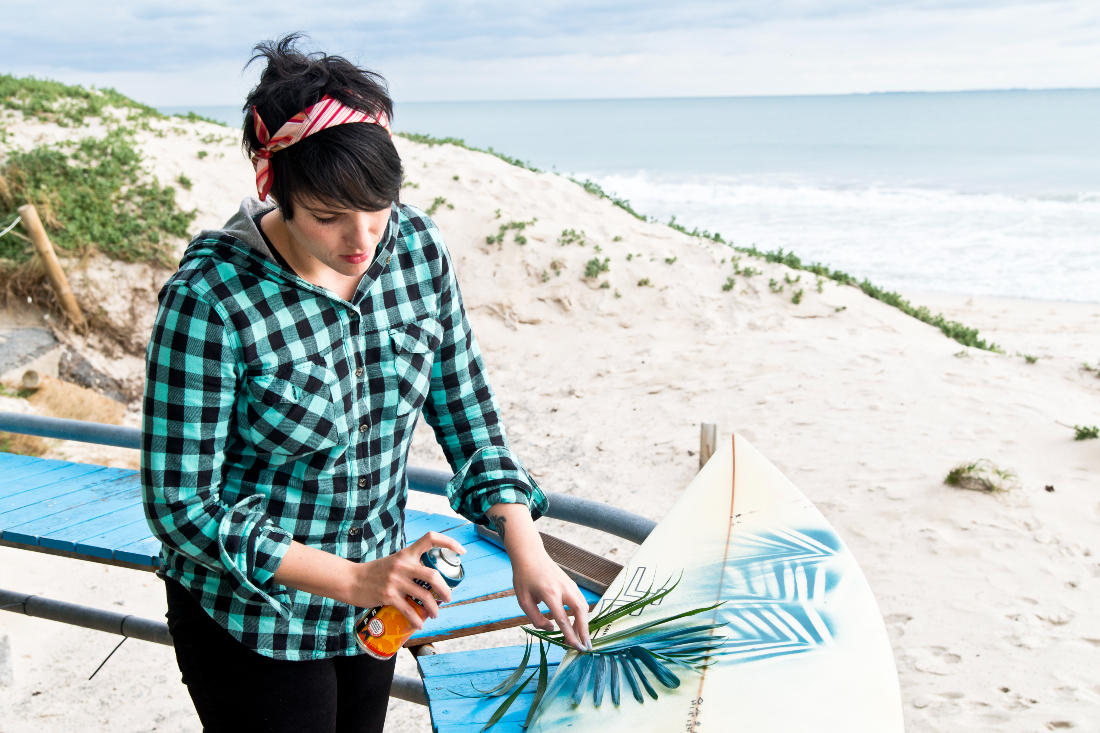 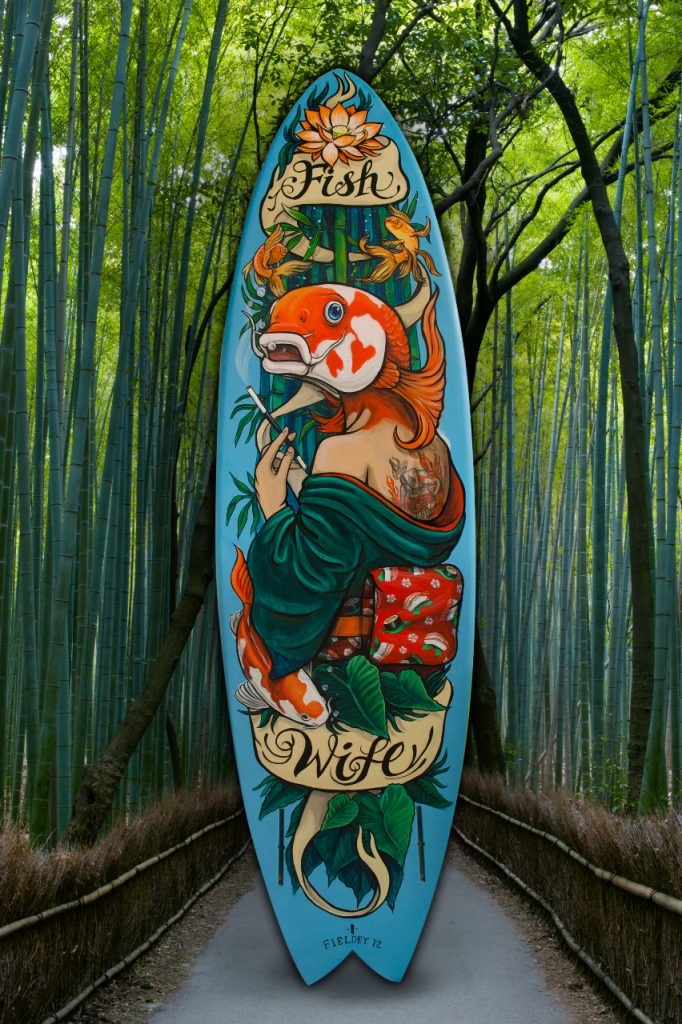 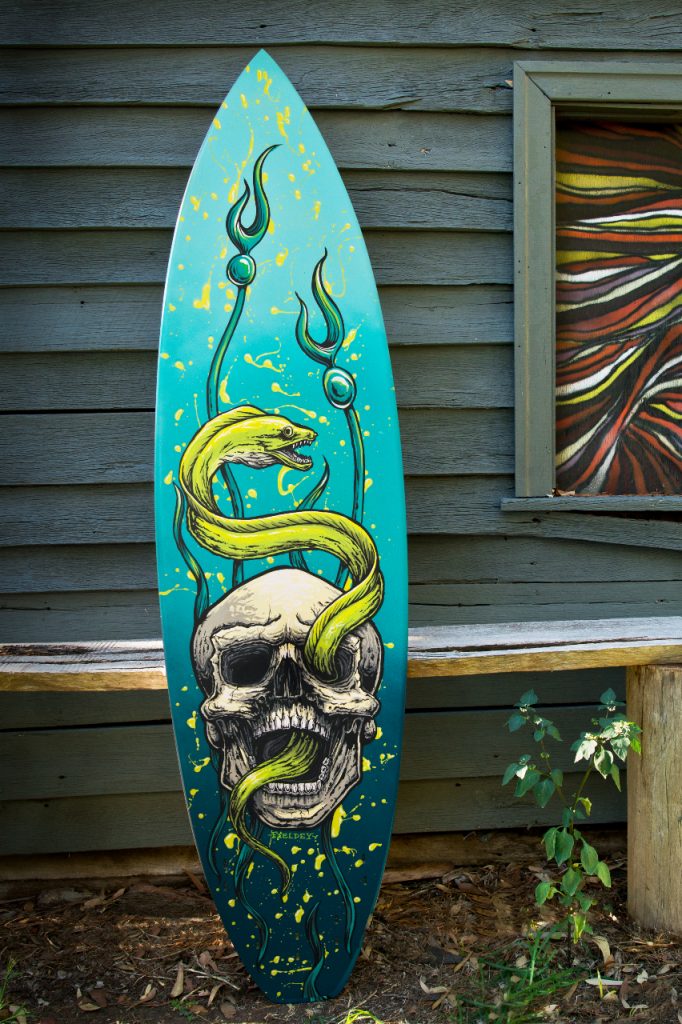 Haylee Fieldes grew up in the South Pacific and now resides in Perth, Western Australia. It was here that she discovered her love of surfing. Fieldey, as she is better known, is a classically trained graphic artist. “I bought and painted my first surfboard in 2011 and I got hooked,” said Haylee. Her surfboard creations are big, bold, and packed with color in a style based on mixed realism and old-school tattoo design. Fieldey is a well-known artist and blogger with a popular YouTube channel. In addition to her surfboard art, she currently specializes in large murals and street art and is recognized for her commissions on skateboards and canvases.

“Right now I’m expecting a baby in October, so I’m not currently surfing.” 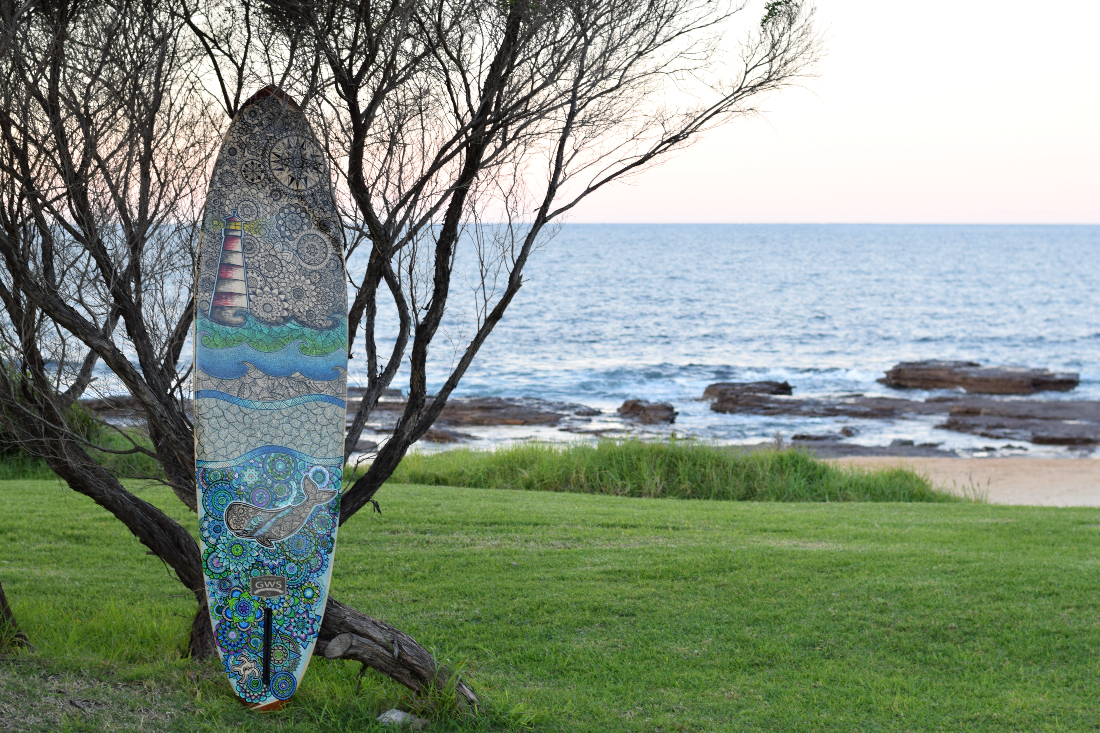 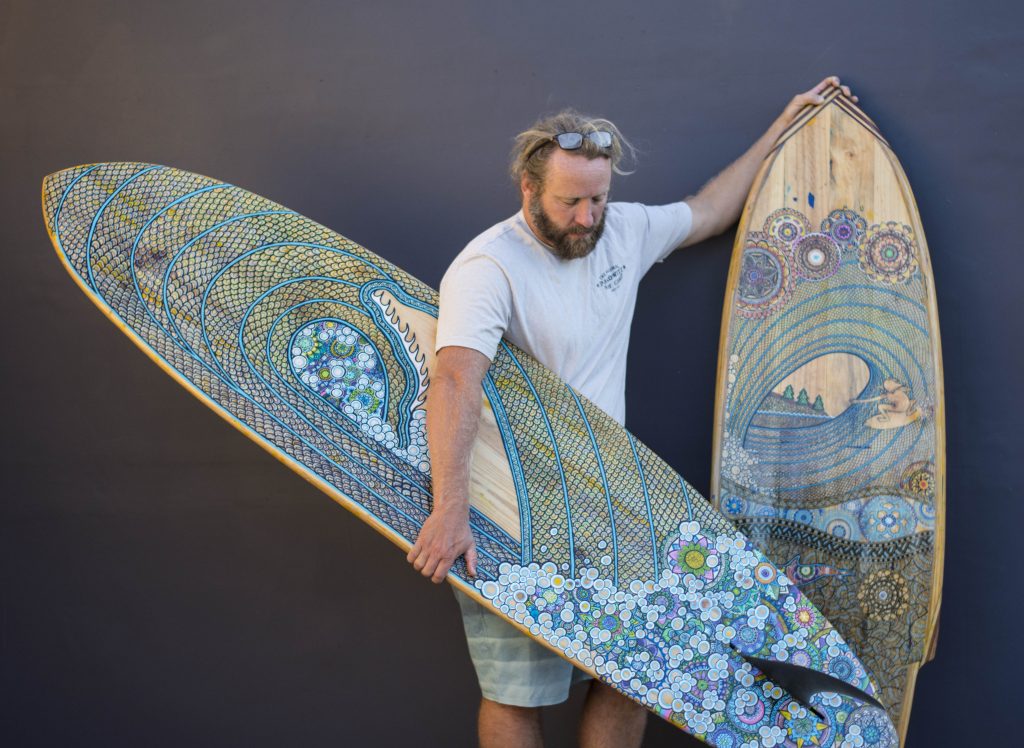 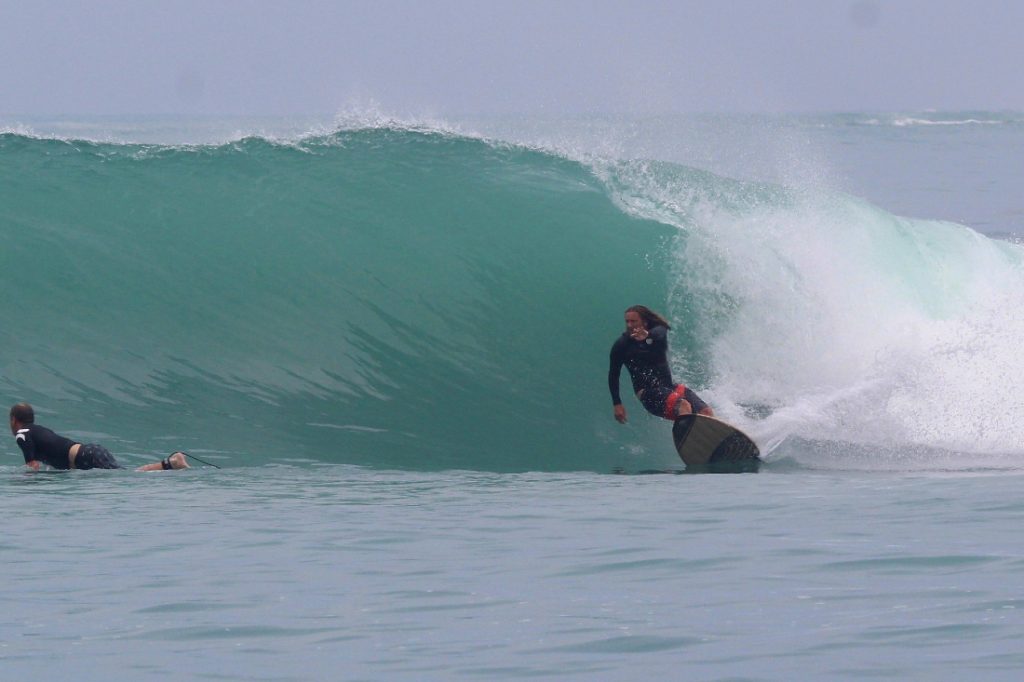 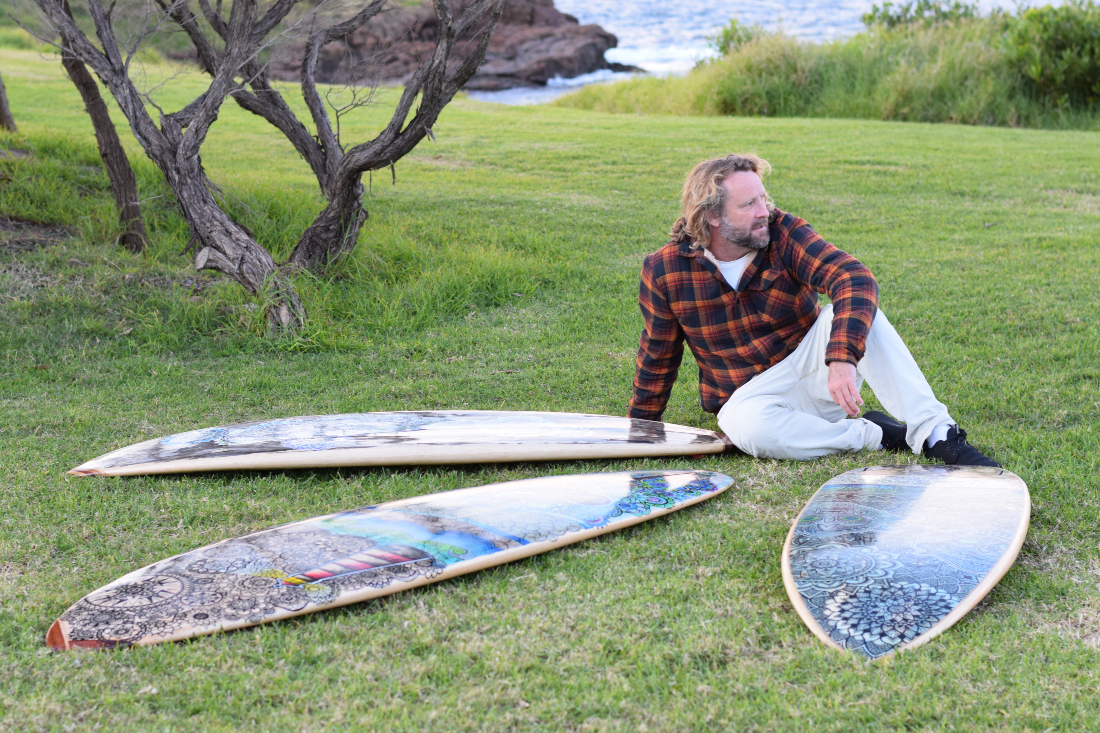 Gareth Smith has had a long love affair with surfing and art. He was born in New Zealand, and moved to Australia at fourteen, where he honed his passion for surfing. As a teenager, Gareth, like many surfers, began to draw and sketch pictures of waves, and says he drew on his first surfboard when he was 18. What began for him as a creative outlet grew into a lifelong craft and skill. Gareth’s process has been authentically organic, and he is completely self-taught. Using the hollow wooden board method, he designs, shapes and constructs his own boards from start to finish.

“It’s a long procedure, but I find myself getting lost in the process, and I love it,” said Gareth.

His beautiful works feature repeating patterns, indigenous art, and symbols of shapes. He takes inspiration mostly from the ocean, and his time spent riding the waves, but says he is influenced by the work of Jason Alders and Drew Brophy. Today, Gareth resides in Wollongong on the coast of New South Wales and has custom boards residing with collectors all over the world. He is proud to be a contributor to the charity Surfers Healing, donating his boards to help their cause, and he still surfs almost every day. 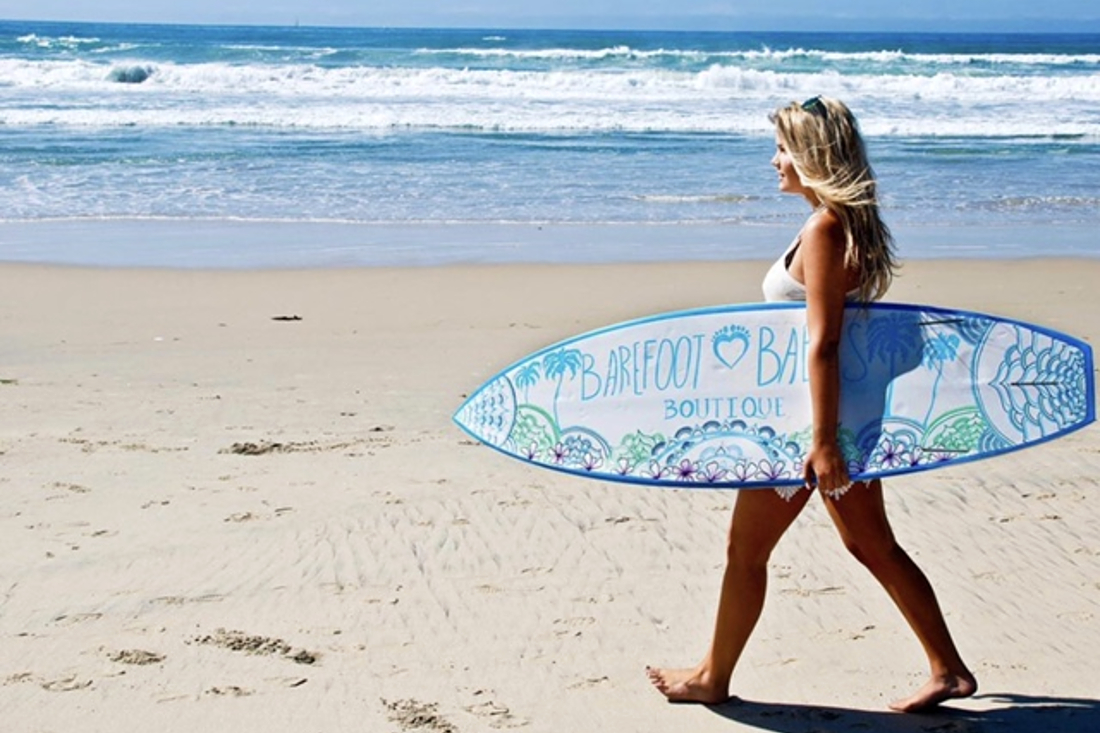 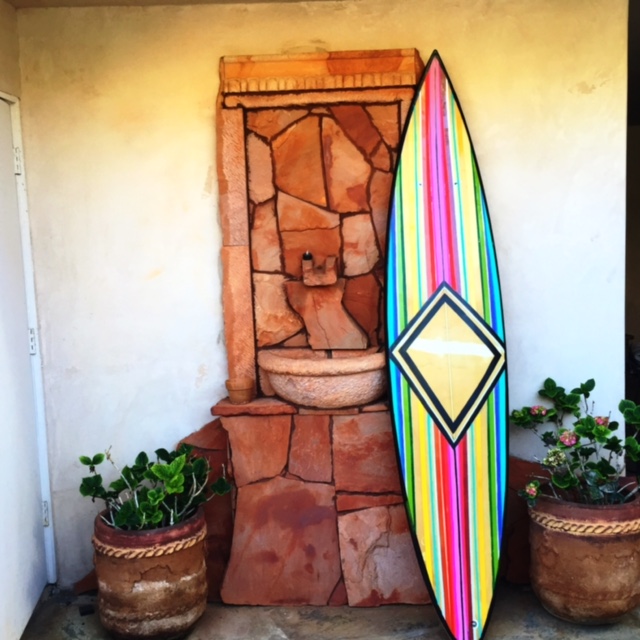 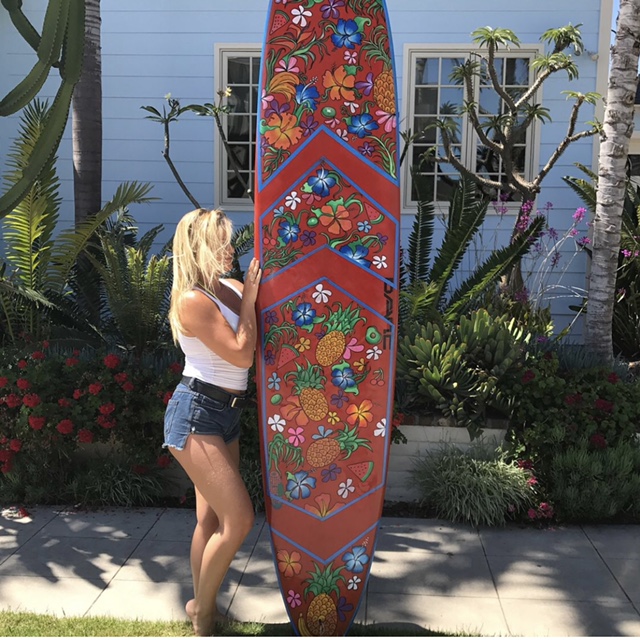 Natalie Thompson resides in San Diego but she calls home, “more of a feeling, and ultimately where my paintbrushes are.” Natalie’s world travels and studies have given her a broad knowledge of art in general, and she says her favorite way to create is with oil. Natalie is not a surfer herself, but painted her first surfboard at the age of sixteen for a friend. Her boards reflect her love of brilliant, bold color and floral patterns.

“I find inspiration everywhere,” she said, “from a rainbow of light on a building, to the way a palm tree branch sways, to the way a person moves their face in a nightclub.

It starts with a theme I’ve thought about, a scene of my friends posing for me or taking a photo of a landscape. Then straight to the canvas or surfboard—no sketching, no planning.” Natalie graduated with a degree in Fine Arts from the San Francisco Art Institute and studied techniques abroad such as marble carving, ceramics, and classical painting. Using acrylic paint and acrylic paint pens, Natalie is happy she has “found a way to paint the boards and have the art last when surfers bring the art into the ocean.”