Surfing Deer Restaurant: Modern Design with a Nostalgic Nod - 30A 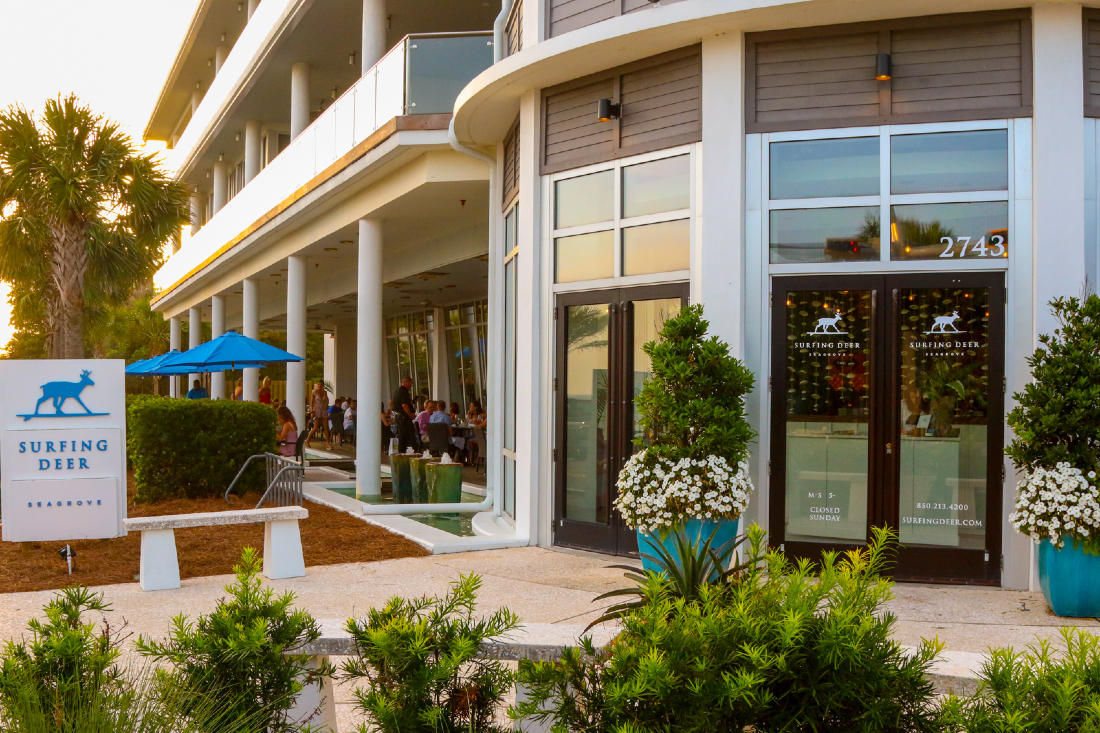 Ann Hartley’s love affair with travel started young. As a child, her mother opened her eyes to the world, whisking her off to exotic places. She saw how large the world was beyond her hometown.

Ever interested in style, Ann started her trajectory with design by working at an upscale clothing boutique as a teenager. That led to college in Texas, her first clothing store in Dallas, and eventually designing a wholesale line of clothing sold around the United States. Through travels back and forth to Indonesia for her business, her global aesthetic was further imprinted. 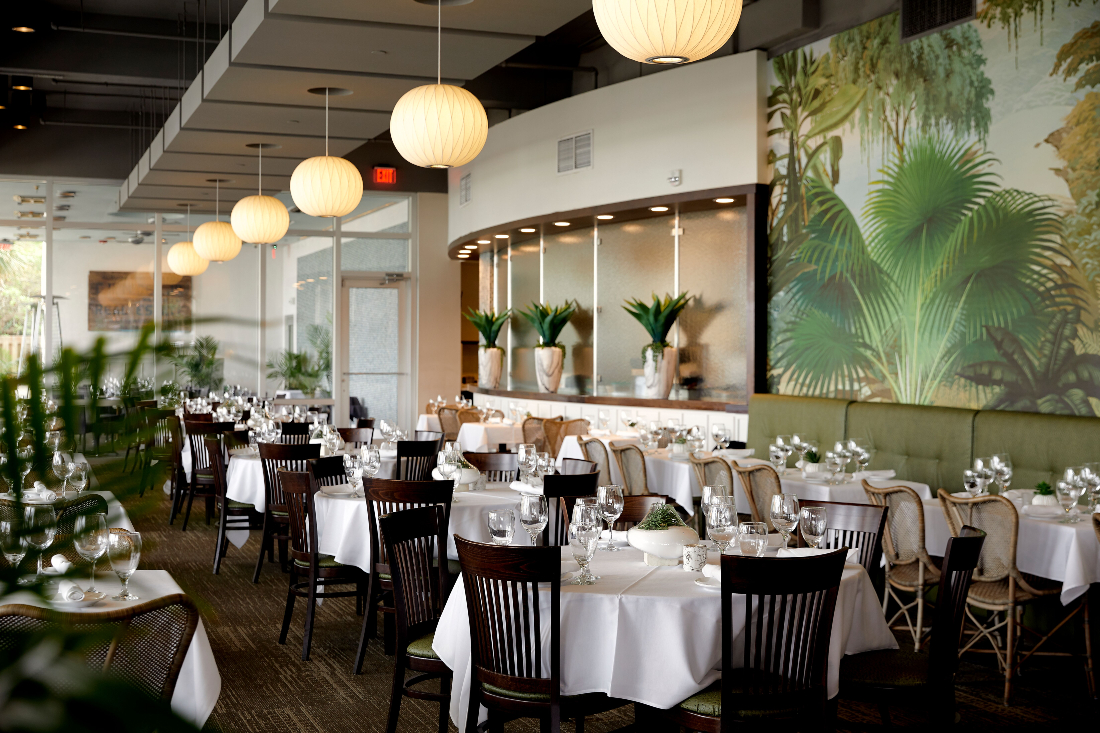 But it was a summer trip to Grayton Beach, Florida, that cemented Ann’s future. Sitting on the beach with her husband and toasting their recently-deceased dads with margaritas, the couple received some life-changing advice from Ann’s father’s best friend.

“He said, ‘If y’all have a dream, you need to live it now,’” Ann remembered. That single comment set a chain of events in motion. Within two weeks, their house in Dallas was rented, they moved to Florida, they sold Ann’s store, and they bought the Seagrove Village Market. “We built that business one happy customer at a time, just loving on people, building relationships, having great products, and being a part of the community.”

That’s the same philosophy they’ve approached each of their businesses with, including Surfing Deer, which was originally slated to be a boutique hotel. They never intended to get into the restaurant business. But once they did, they realized how the community along Scenic Highway 30A was evolving from its rural beginnings to a destination that travelers from all over the world were discovering. The Hartleys wanted to meet that global palate. 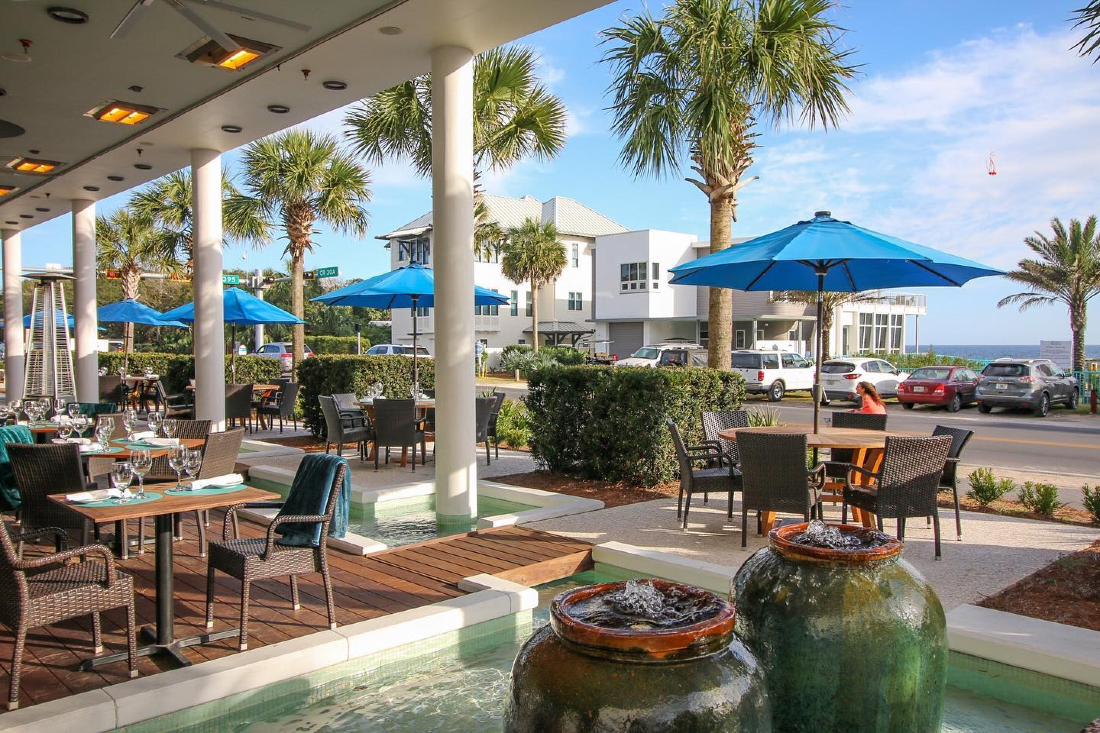 “We wanted those influences on our menu and in our decor,” said Ann.

“We love how Surfing Deer has a South Beach vibe on the outside but coastal woodsy on the inside with a nod to Old Seagrove and the great stories here.”

The original Seagrove signage, a large-scale lush tropical mural, and a vintage photo of legendary Seagrove local named Cube McGee posing with his pet deer bring the nostalgia. The refined interior with its ocean-colored tile and frosted kitchen wall push up against the steel and glass modernity of the exterior.

Ever the entrepreneur, Ann later embarked on yet another venture to feed her passion for other cultures.

“I was in Paris with my daughter on her 16th birthday, and I was walking the streets missing my creative ventures and saying a prayer to God to help me figure out what to do, when inspiration struck,” said Ann. When she got home, she put together a brochure advertising guided shopping trips to Paris where she could show others what she loved about the city. That led to jaunts to Marrakech and other far-flung outposts. 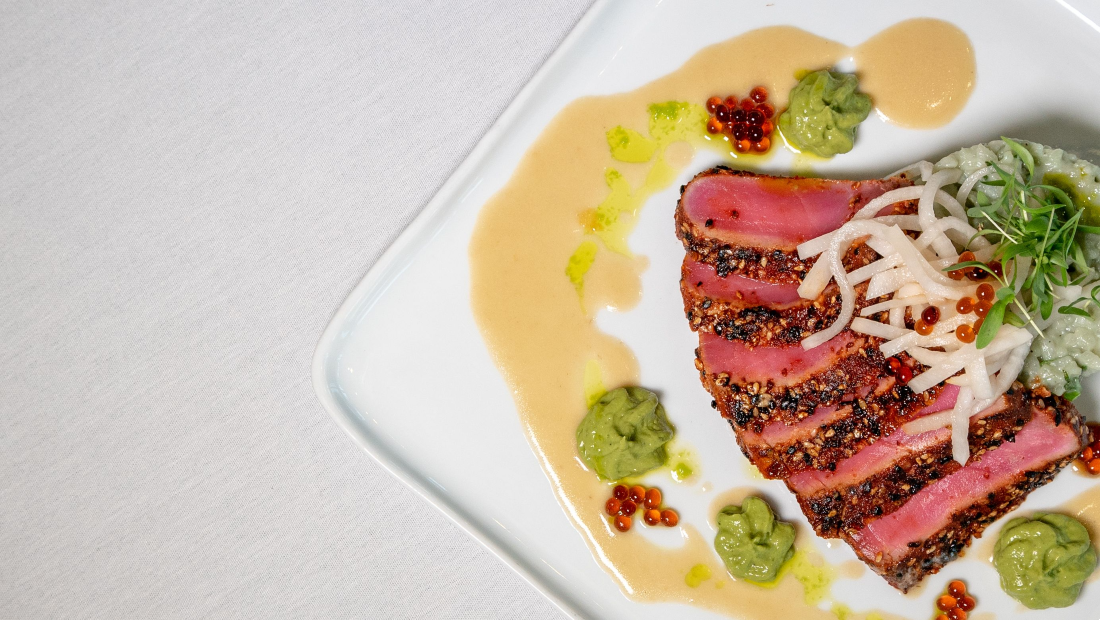 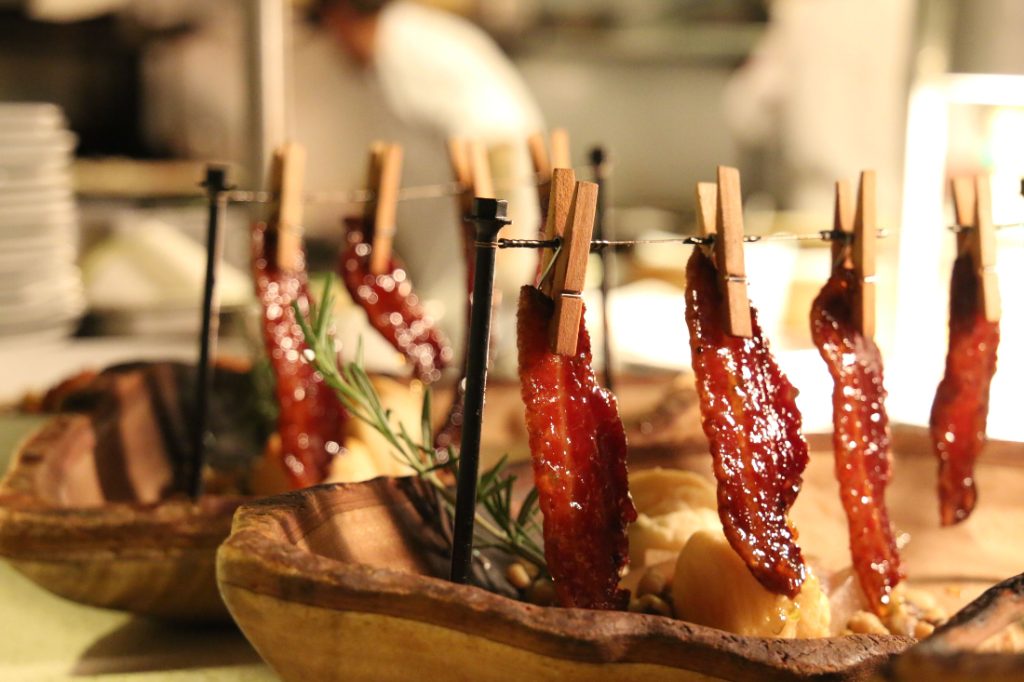 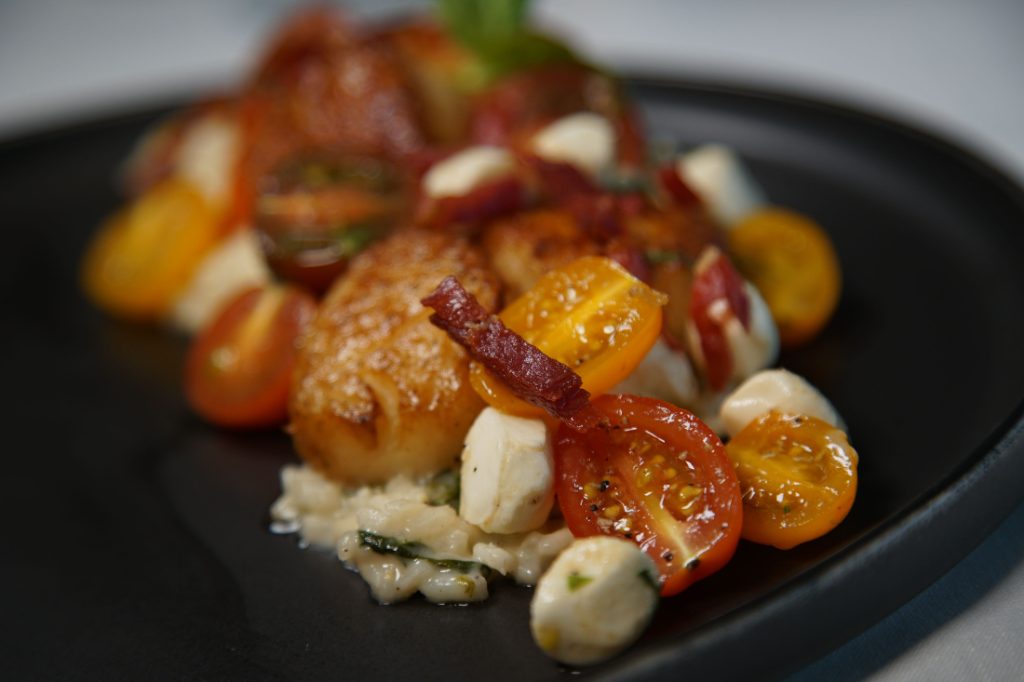 “I would help them make arrangements, pick them up at their hotel in the mornings, then deliver them back about seven o’clock at night,” she said. “It satisfied a creative itch in me because I was showing them things that made my heart pitter-patter. It wasn’t just fashion. It was cooking and it was chocolates; it was the markets and antique textiles and all kinds of experiences.”

Bits of Ann’s wanderlust can be seen in the global food on the menu at Surfing Deer as well, but Chef Gregg Smith is the master at the helm of those Instagram-worthy dishes.

“I heard of the clothesline bacon idea out of New York, but the presentation wasn’t what I wanted,” said Chef Gregg. “I’m kind of a handyman, so I started working on a vessel. Now the bacon hangs over Southern peas with pickled peaches for a little acid. We made it more Southern by adding a sweet tea glaze to the bacon and serving it with these little sweet potato biscuits.” The dish balances sweet with smoke, tang with creaminess, and delicate with robust, but the final touch of torching the sprig of rosemary tableside stuns. 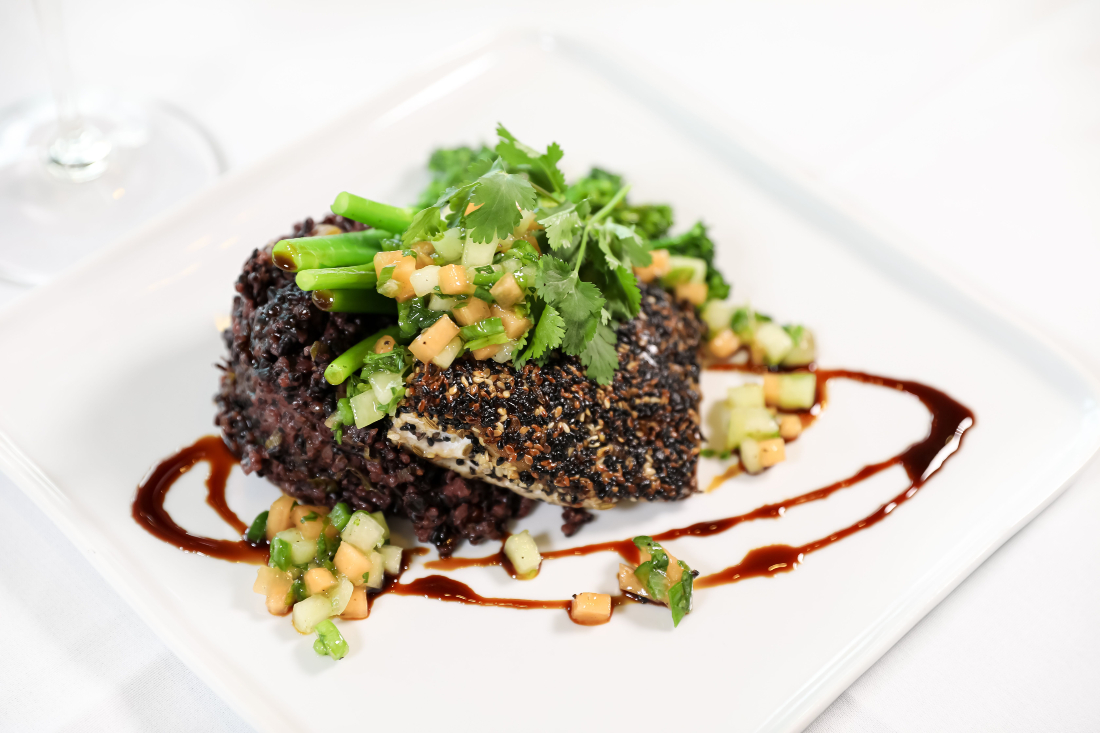 Chef Gregg’s penchant for global flavors extends to dishes like the snapper studded with sesame and coconut, drizzled with Thai peanut sauce, and served with a razor-thin pear salad. It is a balance of sweet, heat, crunch, and acid, but it is also a visual masterpiece of delicate cuts and vibrant colors.

“I want to build the presentation so when the plate hits the table, people think, ‘Wow, that looks delicious,’” said Gregg. “I don’t want to be over-composed, but I like to put a cool aspect or ingredient on the plate that people may not have seen or heard of before.”

How the Surfing Deer Got Its Name 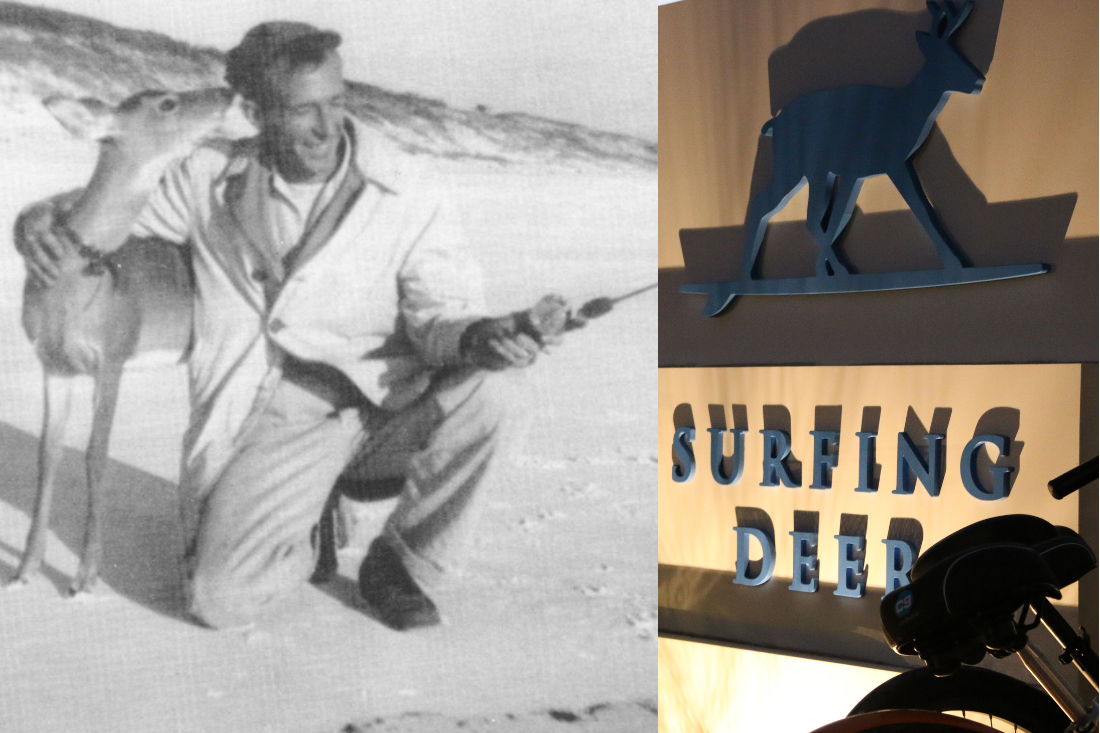 In 1949, a man named C.H. McGee purchased 160 acres of Gulf of Mexico coastline in Walton County, Florida. It wasn’t an easy transaction. McGee spent 18 months visiting the owner, J. R. Moody, at his farm, sharing home-cooked meals and persistently asking him to sell him some of that sugar-white sand. McGee’s son, Cube, always accompanied him on these visits.

With the land finally secured, McGee began a letter-writing campaign describing Seagrove as a hidden paradise where life was only interrupted by the sounds of nesting birds and ocean waves lapping the shore. He built five houses, and the county promised a paved road to access Highway 98. At the time, McGee began developing Seagrove; there was no post office, no telephones, and no grocery store.

McGee carefully planned the burgeoning community to protect it from overdevelopment—he wanted to attract families looking for a unique vacation experience. He built a general store to supply visitors with necessities. This later became Seagrove Village Market, the Hartley’s first business along Scenic Highway 30A. Newspaper and postal services were arranged, and until 1958, all phone service happened at Alfred Barrett’s filling station on Highway 98, the site of the nearest payphone.

Cube McGee grew up amidst the transformation of this wilderness into a destination location, and he adopted his father’s dream. When a visitor had an emergency, he would get dressed and head to the payphone. Water came in the form of a windmill-powered well, often resulting in leaks. But in 1979, things began to change. Cube facilitated infrastructure in Seagrove, appearing before the Public Service Commission in Tallahassee.

Cube was widely known for his adventures with his pet deer, Bambi. They could often be seen playing in the surf when Seagrove Beach was just a few houses and a dream of paradise. As homage to these early beginnings and to the vision of McGee, the Hartleys named their restaurant Surfing Deer.

BEACH HAPPY 🏝️😎 visits Seagrove along Florida’s Scenic Highway 30A, including a stop at the famous Seagrove Village MarketCafe.