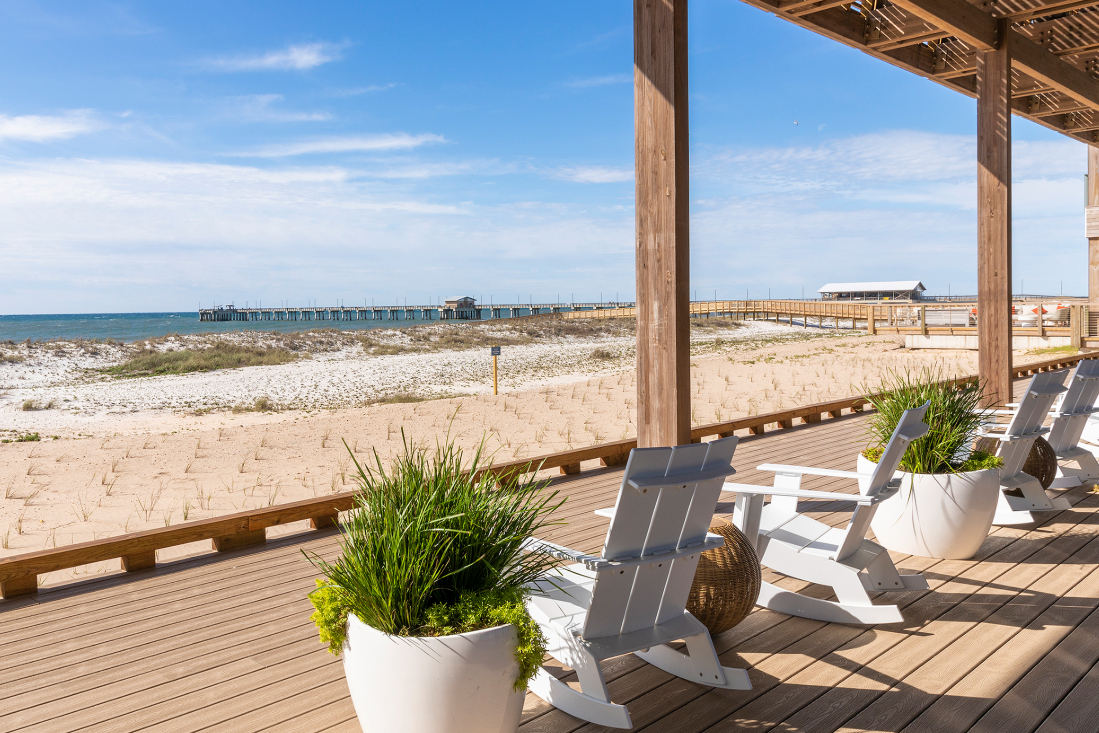 The Lobby at The Lodge at Gulf State Park. All photos by Julie Soefer.

The Lodge at Gulf State Park isn’t your average hotel. Located in the heart of a public recreation area on the Gulf of Mexico with two miles of beaches, The Lodge is a stunning example of a development that promotes environmental and economic sustainability.

Take a quick look at the hotel website, and you’ll find over a dozen sustainability initiatives related to the building and operation of The Lodge.

15% percent of the building materials used were recycled, and 70 – 75% of the construction waste was recycled and didn’t end up in a landfill.

The buildings that make up The Lodge have been designed to reduce energy usage by 32 percent and interior water use by 35 percent compared to typical facilities of the same size. This reduction in energy usage is accomplished via passive cooling techniques like building orientation and wood screens to filter sunlight. Additionally, condensation from the HVAC system is collected and recycled to replace the water in the pool, 2,000 gallons a day on average. 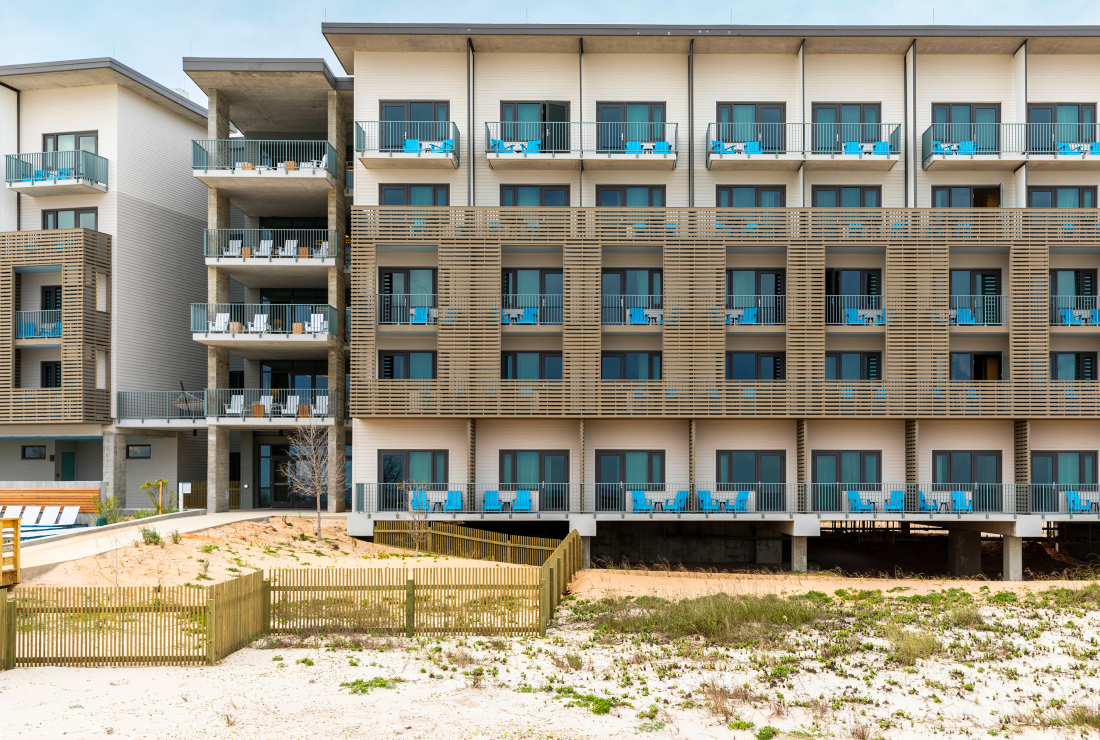 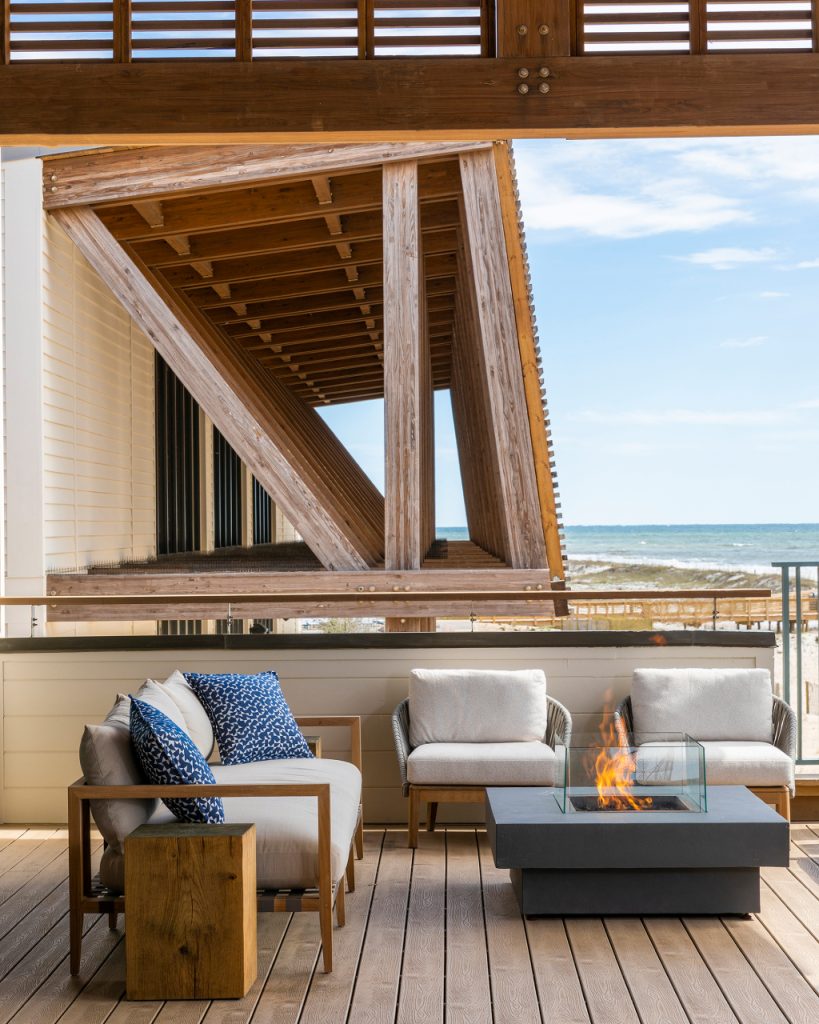 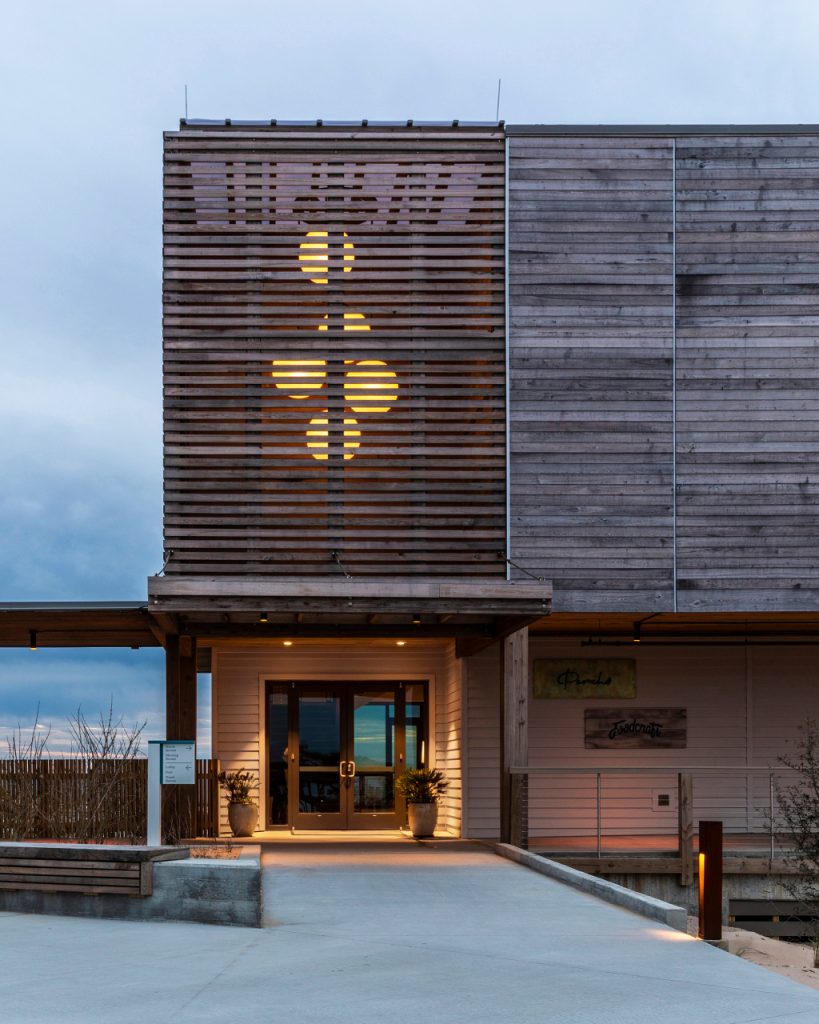 The hotel was a project that was years in the making and not without its challenges and controversies. Environmentalists were quick to oppose the building of the 350-room Hilton branded lodge when it was first proposed, mainly because settlement money from the 2010 Deepwater Horizon oil spill was being used to fund the project. Tye Warren, a developer who directed the $140 million enhancement of Gulf State Park, saw the potential for a symbiotic relationship between economic and environmental interests.

“This project was unique in that the funding for the project was meant to restore the environment and the economy that was damaged by the Deepwater Horizon oil spill,” Warren said. “Some people only heard the environment word and some people only heard the economic word, but as a legal matter, those two things had to coexist. I think one of the most enjoyable outcomes of this project is to be able to point to specific examples of how those things are not in conflict.”

Warren explained that if they had spent all $140 million on creating public access amenities, there wouldn’t be a system in place to fund long-term maintenance. “Many of these trails are made of wood and elevated to respect the ecosystem that sits below them. They will need to be replaced after about 7 to 10 years,” he said. “The Lodge was built to be the economic fountain to stabilize the whole park.” Once The Lodge makes enough money to support itself, any additional money made goes to the 6,150-acre park. 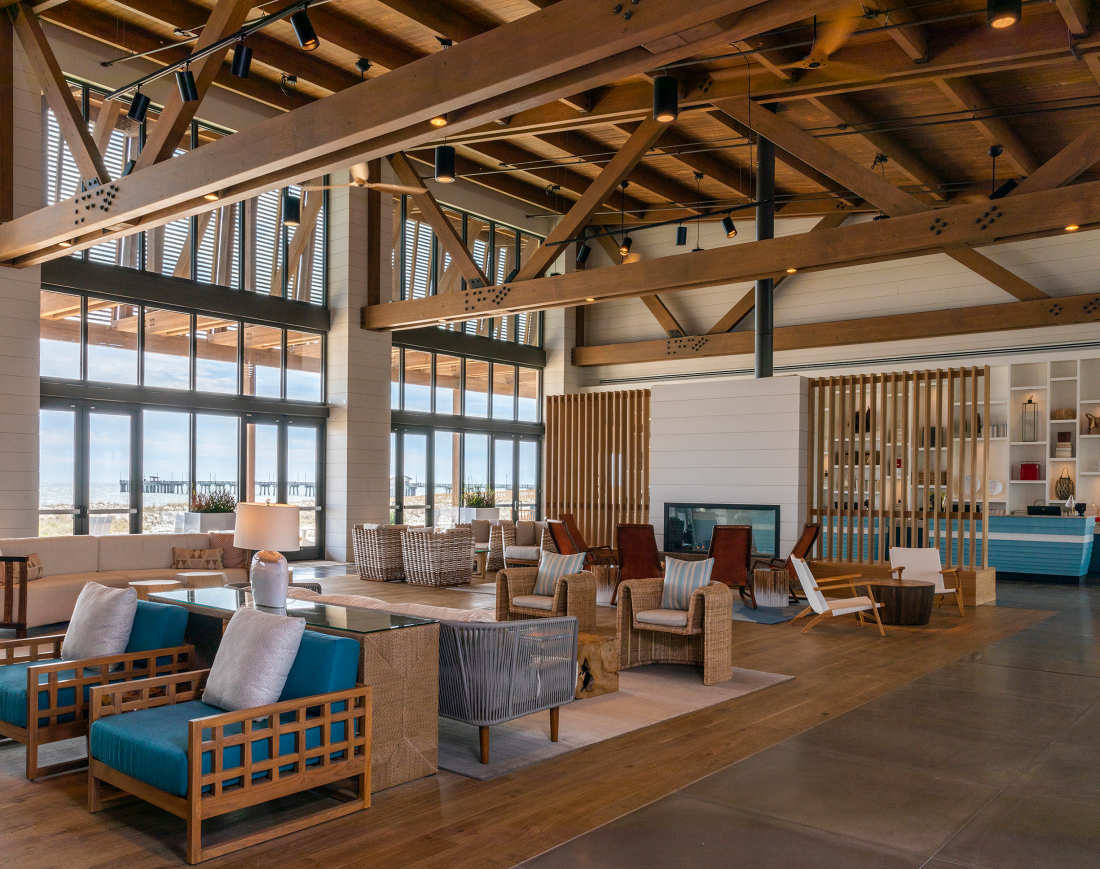 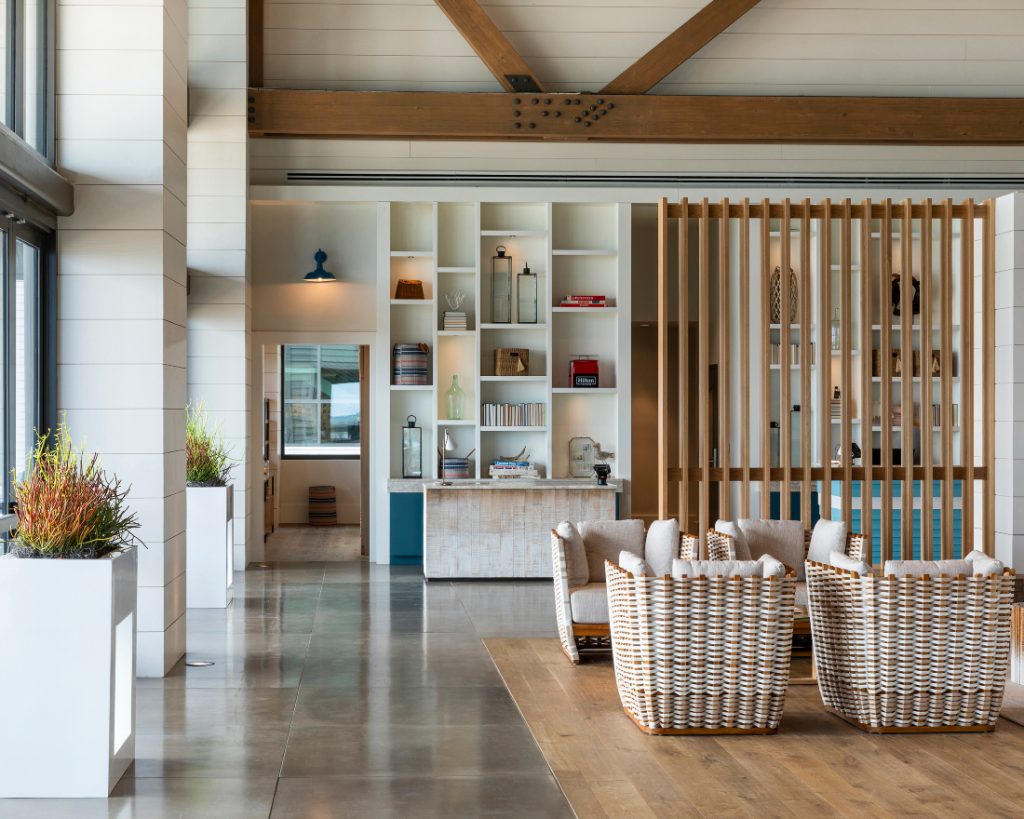 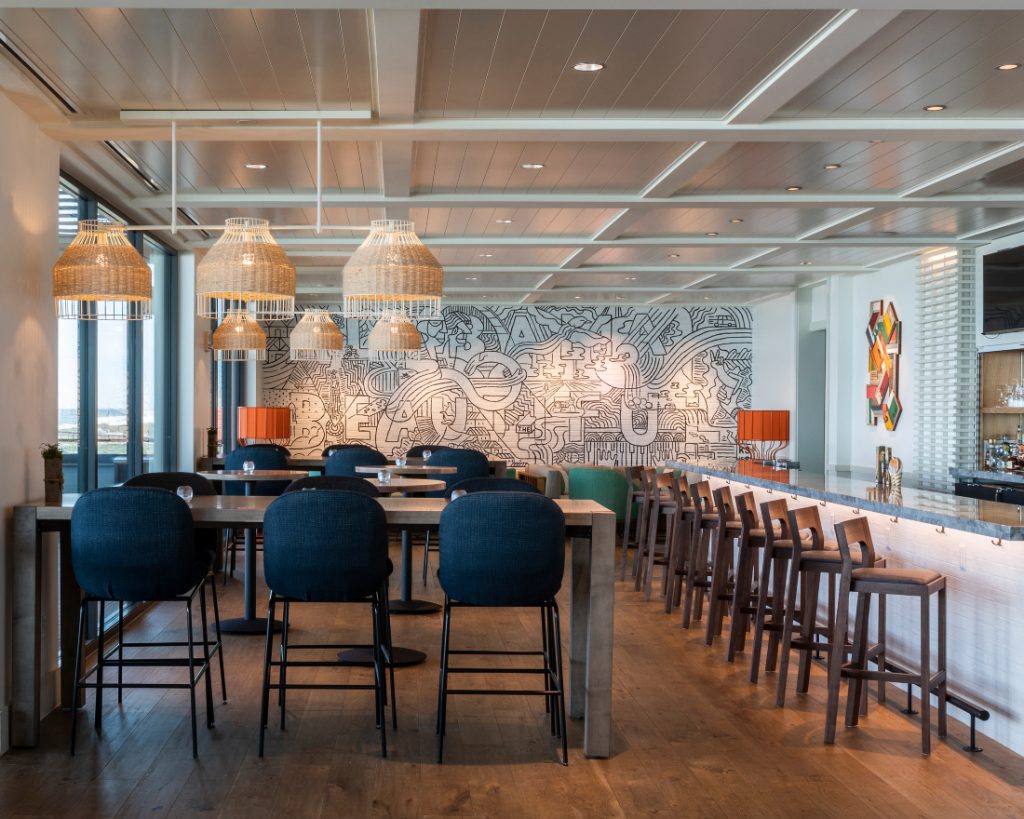 Since its official opening in November 2018, The Lodge has generated enough income to fund new bathrooms at the Lake Shelby picnic area located across the street from The Lodge.

The revenue generated by the lodge also invested in a free tram that runs through the park, a free bike share, a dog park, and a playground that cost almost $300,000 to build.

“All of these improvements came from a fountain that some people viewed as an economic enemy. The thought that it was taking something away from the public access part or the environment part,” Warren said. “But now, because of the revenue The Lodge generates to support the park, we’re set up to be able to do things like help with dune restoration and so much more.”

The multimillion-dollar enhancement of Gulf State Park was a massive undertaking that was made possible by the Alabama Department of Conservation and Natural Resources, and The University of Alabama Center for Economic Development, and the state of Alabama, which owns the park.

Warren was honored to have the opportunity to lead the project and feels that the end result exceeded expectations. “I’m really proud of the team that put it into place and the hundreds of people that rallied around the vision to make it become a reality.” 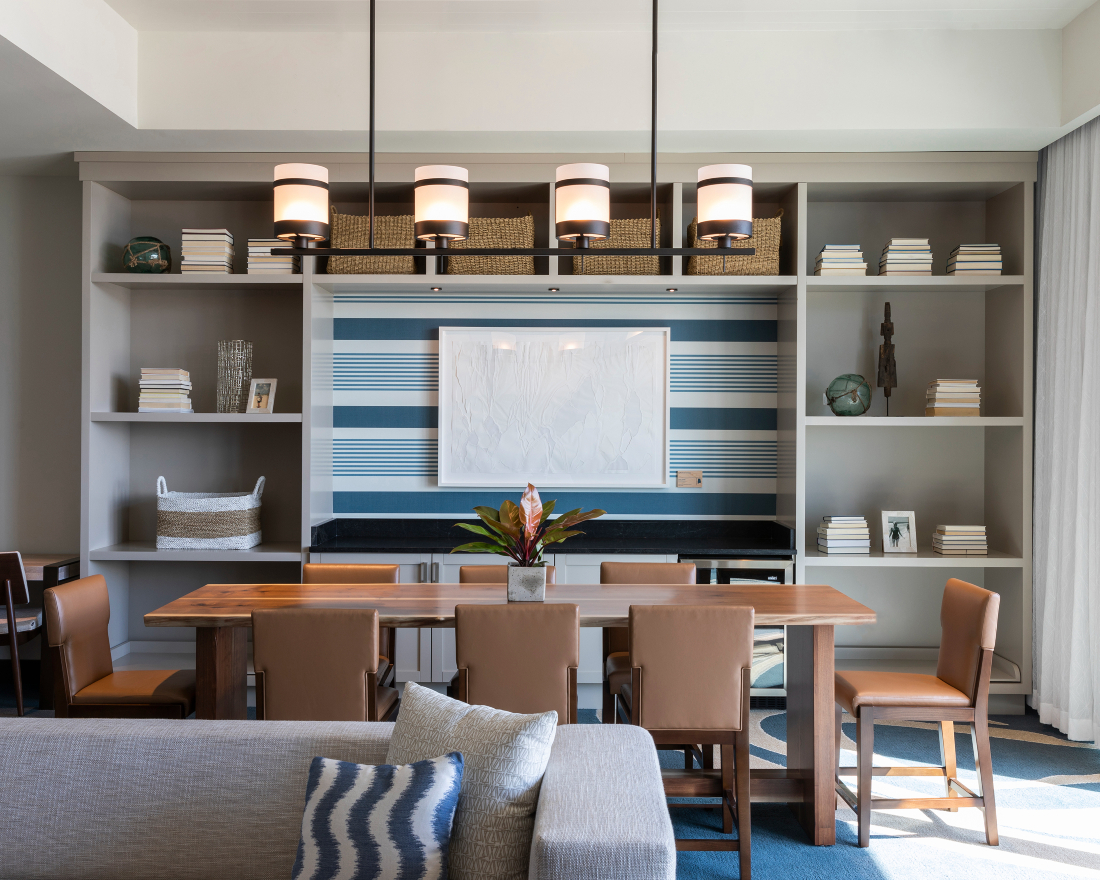