The Oar House and Oyster Bar Delivers Fresh Seafood, Friendly Service, and a Timeless View - 30A 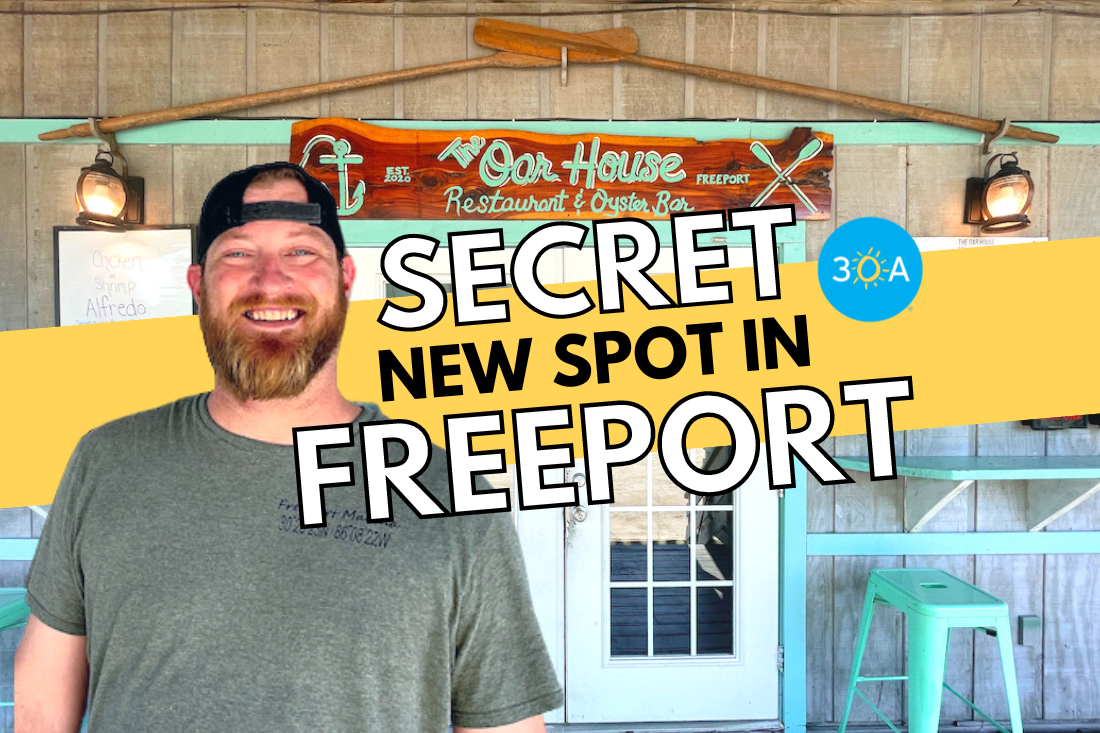 Pockets of Old Florida still exist in places like Panacea, Carabelle, and East Point. If you turn off Main Street in Freeport and follow the dirt road to Marina Village, you’ll find a slice of vintage Sunshine State. The Oar House and Oyster Bar sits at the dead-end, beckoning hungry souls with the sounds of bullfrogs croaking, marsh grass waving, and waves lapping against the floating art gallery. Basically, if you know, you know.

A recent Saturday night revealed the charm of this place that seems a little lost in time. Children played on the steps, fishermen enjoyed a beer outside the ship store, and the sounds of the bayou filled the air. Opening the door, I was transported to 1960s Florida.

“I love that on a Saturday night, you’ll see guys get off the boat in flip-flops, shorts, and a tank top, but then you have the couple next to you out for date night. She’s in a summer dress, he’s in a polo shirt, and those two sets of people sit right next to each other,” said Zack Bryant, co-owner of The Oar House and Oyster Bar. 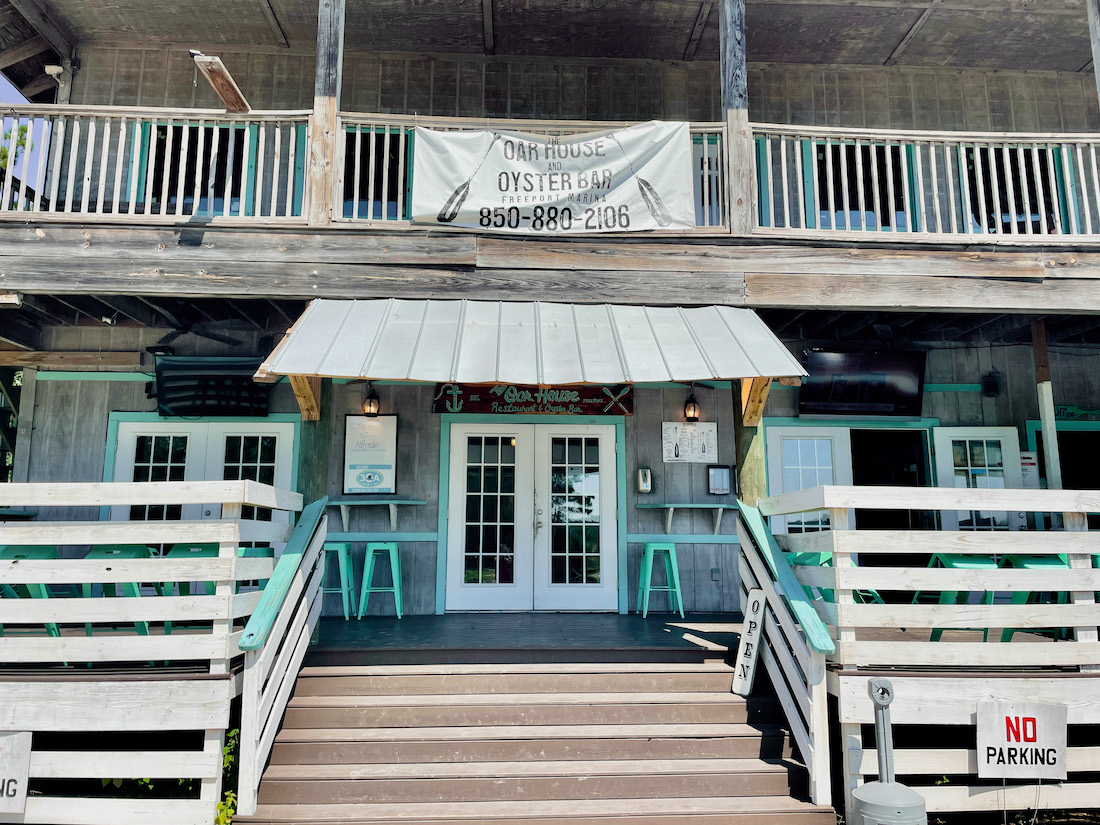 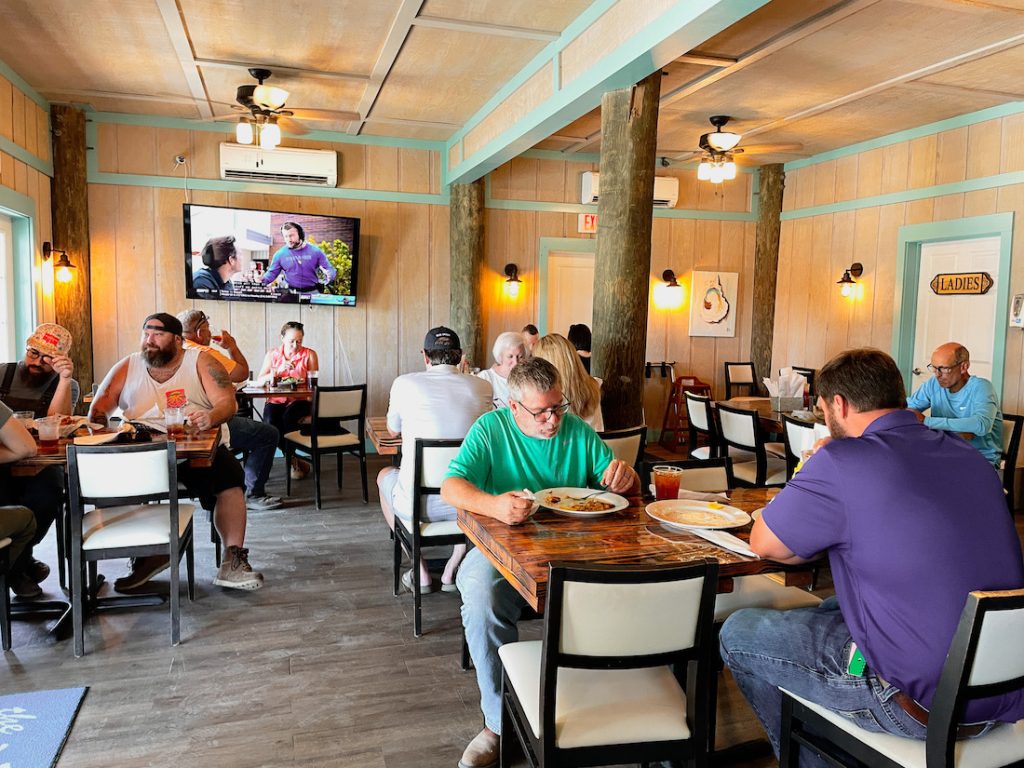 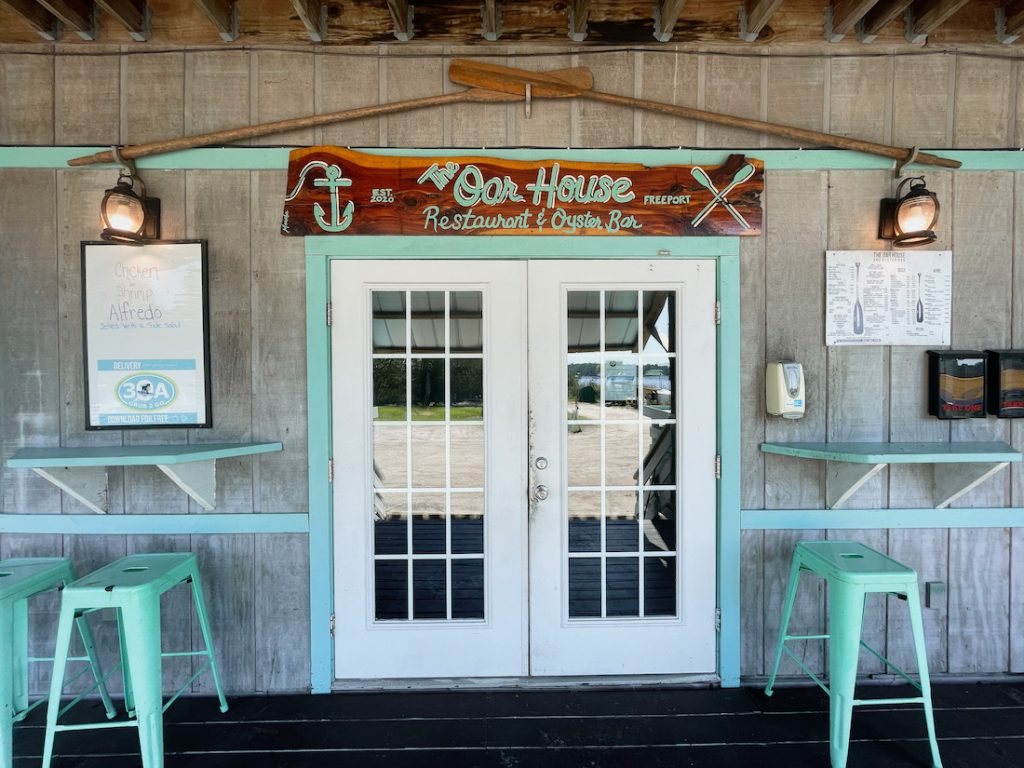 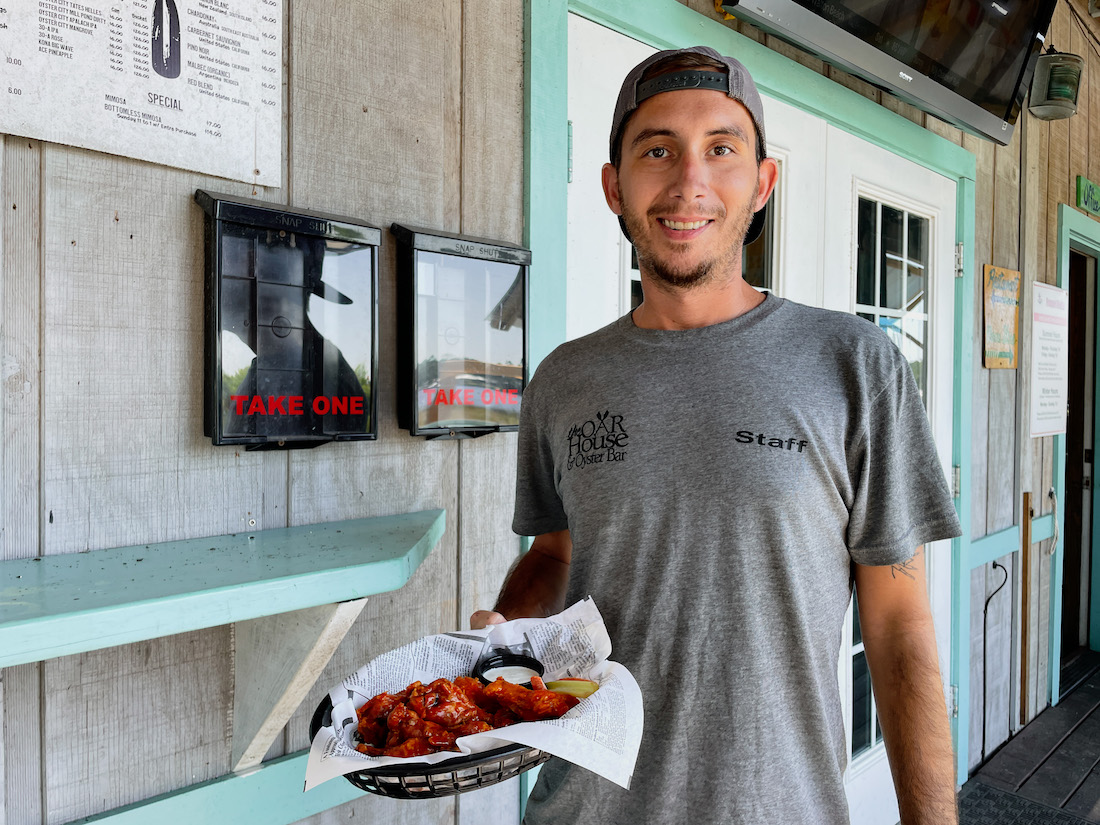 Our server, Billy, greeted us with a friendly smile and lots of recommendations. We smelled the smoker as we pulled up so smoked tuna dip was a must. It did not disappoint. The homemade chips dusted with cajun spice, the smoky, not mayonnaise-heavy mound of dip finely chopped with the occasional hunk of smoked tuna bark, and a secret ingredient Bryant would not divulge added up to a delicious start. A couple of pints of local brews on draught paired perfectly.

As dinner progressed I noticed all the food seemed to be coming in from outside. The servers ran in and out of the back door, arms laden with bowls of gumbo, ample baskets of shrimp, and platters of blackened redfish. A quick peek revealed a food trailer (built by Bryant and his business partner Simon Manyweathers) furiously pumping out all the food for the restaurant.

Talking to Bryant I can tell this place is a labor of love and a continuation of his family legacy. His parents and grandparents owned restaurants back in the 90s and 2000s. He grew up in that world, cooking in kitchens at the tender age of 16. 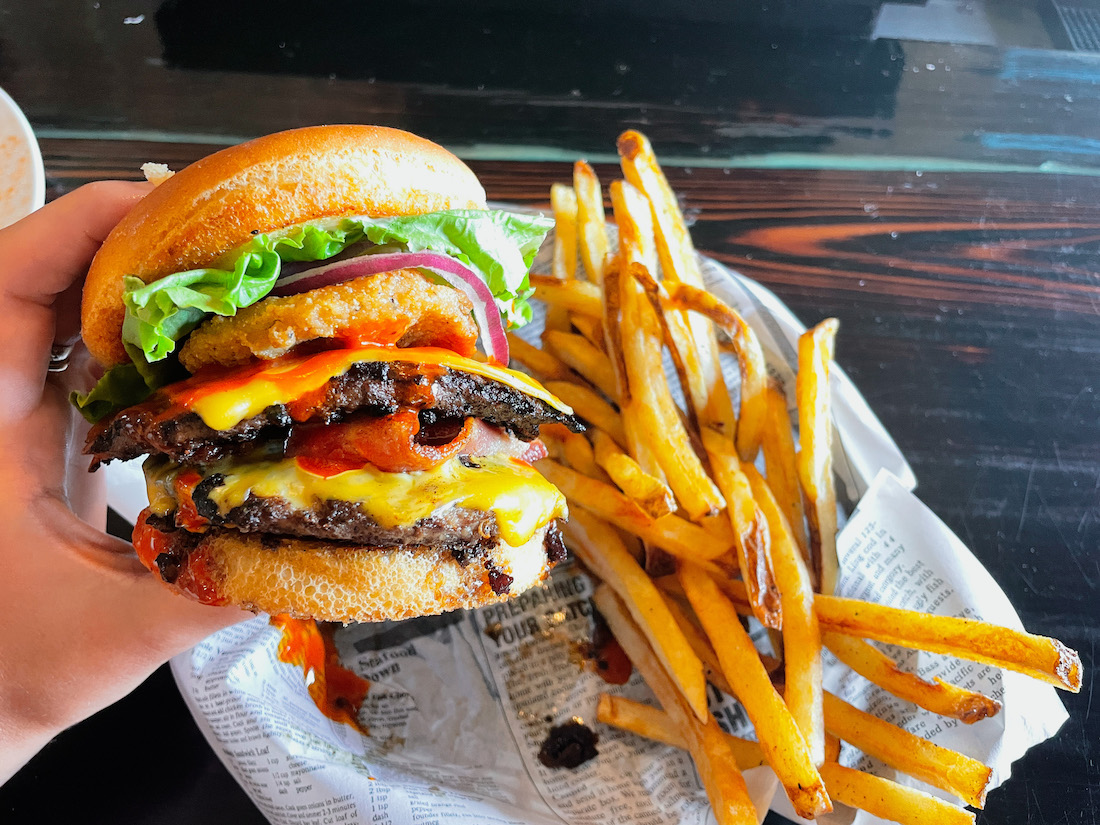 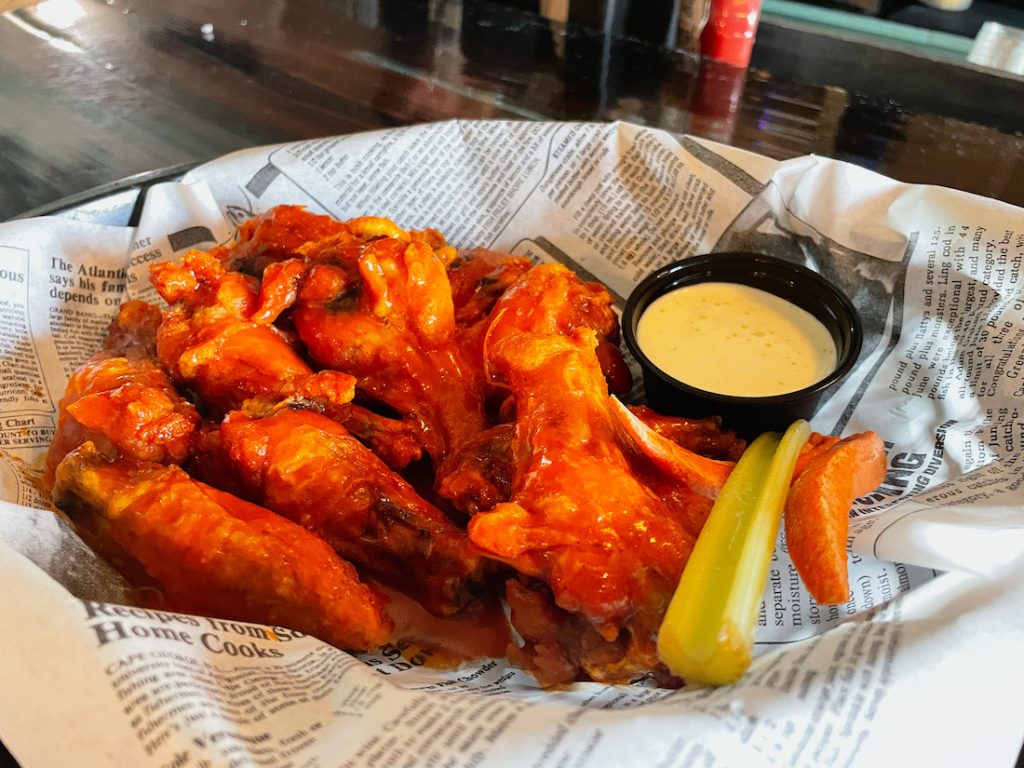 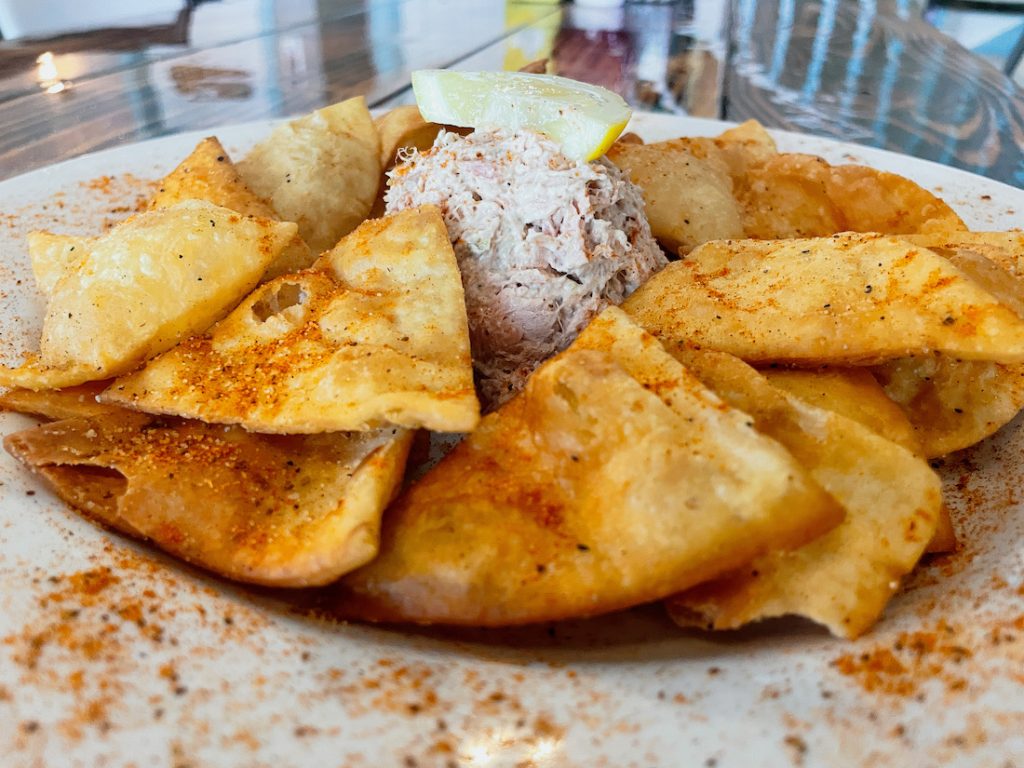 “Most kids when they turn 18 and graduate high school get a vehicle or something to go to college with—my parents gave me the position of kitchen manager with no extra pay,” Bryant said.

When he came home from college though, the restaurant was sold. His plans to get a business degree and come back to take the helm no longer worked. So, he started an outdoor business until he could bank enough money to open his dream restaurant. His father’s death on New Year’s Eve in 2017 catalyzed Bryant and his wife Wendy.

“I’d known the man who owned the marina here for 10-12 years. He reached out after my dad passed. At the time, I didn’t know what I wanted. My dad was only seventy years old; he was young. His death hit me hard, and this guy asked me to meet down here and talk,” Bryant said. 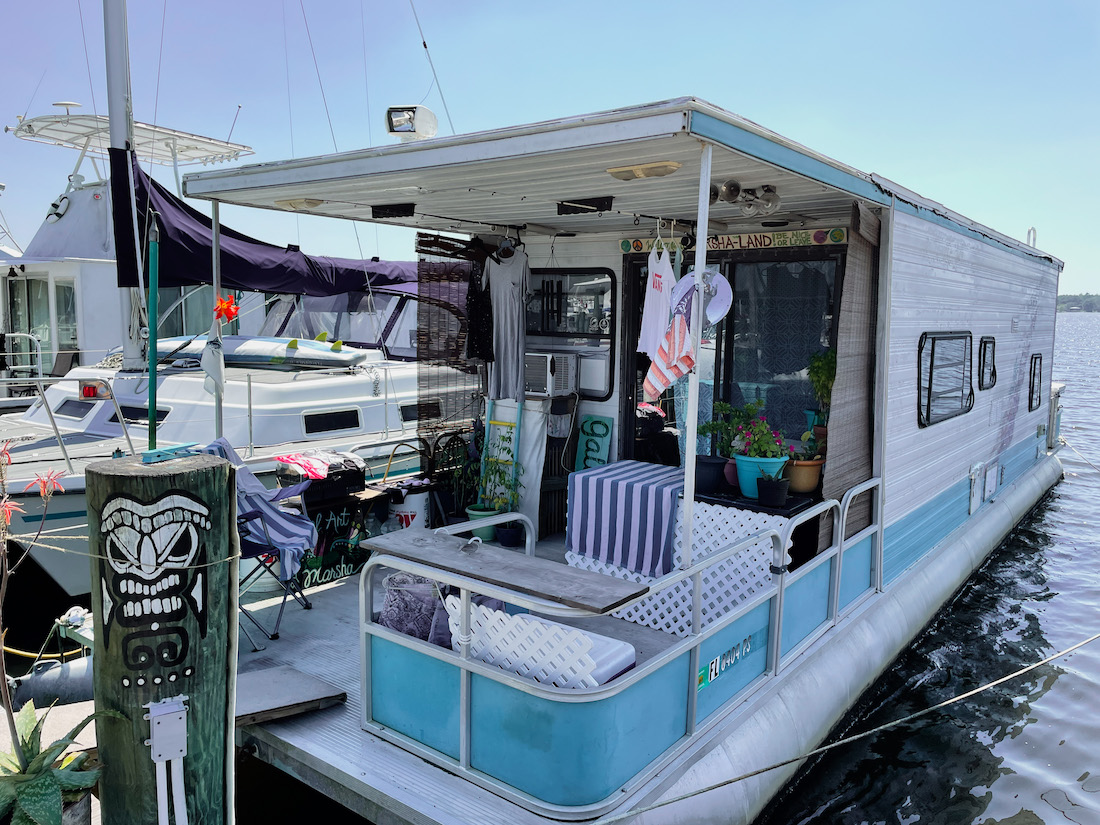 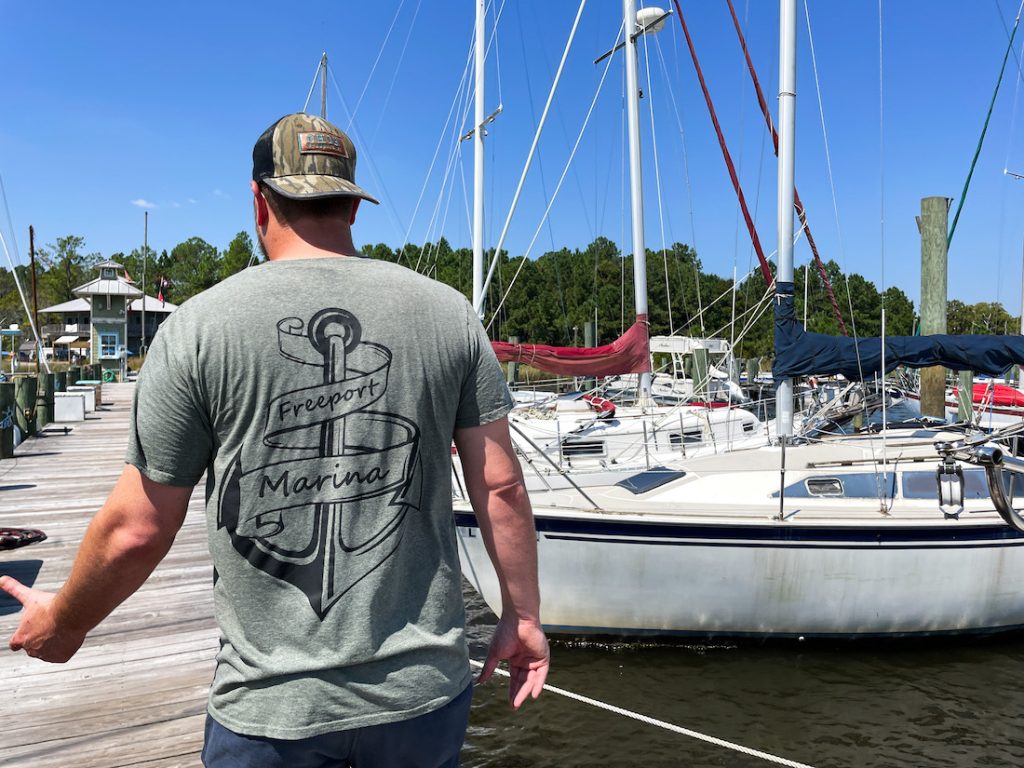 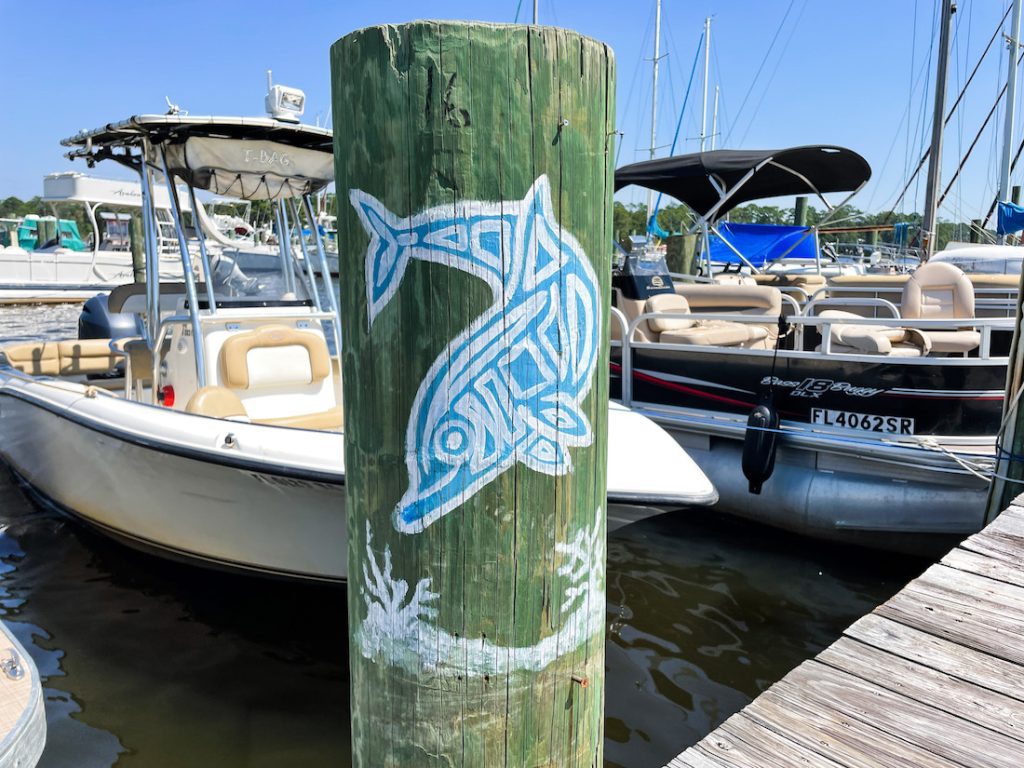 That meeting led to negotiations, renovations, and finally, The Oar House and Oyster Bar opened on October 2, 2020. Bryant and Manyweathers also bought the marina. The name is an homage to Bryant’s dad, Gary. “My dad always said, if he ever opened up again, he wanted to call it the Oar House and Oyster Bar. When I finally decided I wanted to do this, I went ahead and named it what he wanted.”

And once they expand upstairs, Bryant has a cache of his pictures and memorabilia they plan to glaze the bar with, sealing his dad’s mark on the restaurant. He plans to stick to his do a few things, but do them well model, with a few additions. But favorites like the house wings and Oar Burger smothered in bacon jam will stay.

“It took 13 years for me to open this restaurant. All that time I honed my craft and thought about menu items. I worked on the house wing sauce the whole time, critiquing every ingredient, and every measurement. Now it’s our number one seller.”

“13 years of development, but we have the best wings in town—it’s like buffalo but, a lot more flavor.”

On the horizon is upstairs dining, looking out over LaGrange Bayou, an indoor kitchen with expanded offerings, and a ship store with all the necessities for a successful day of angling. But today there’s tuna smoking on the grill out back destined for dip, seats on the porch with room for pups, and the kind of space you want to hang out and sit a spell. 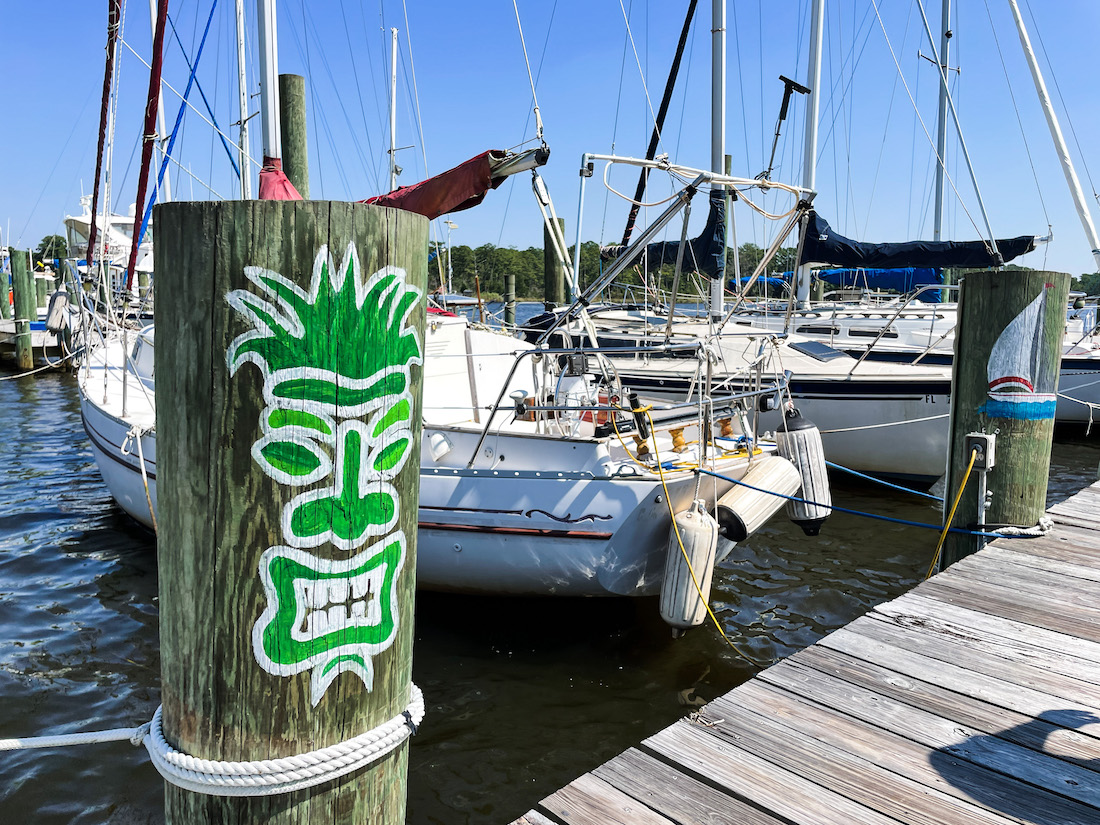 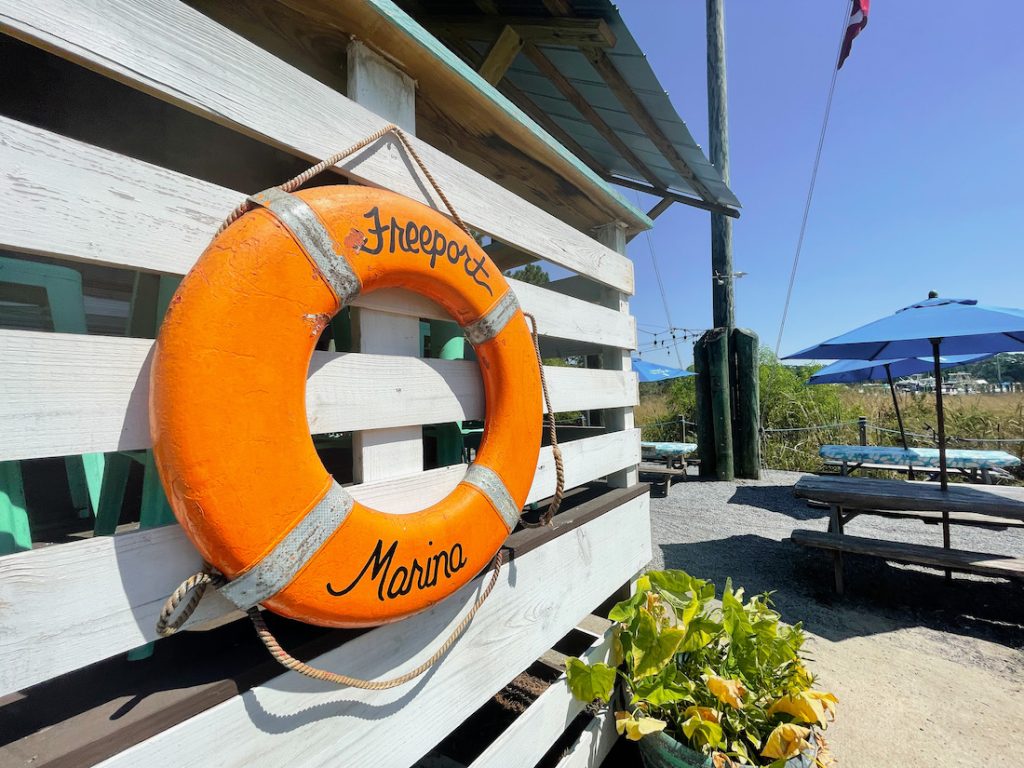 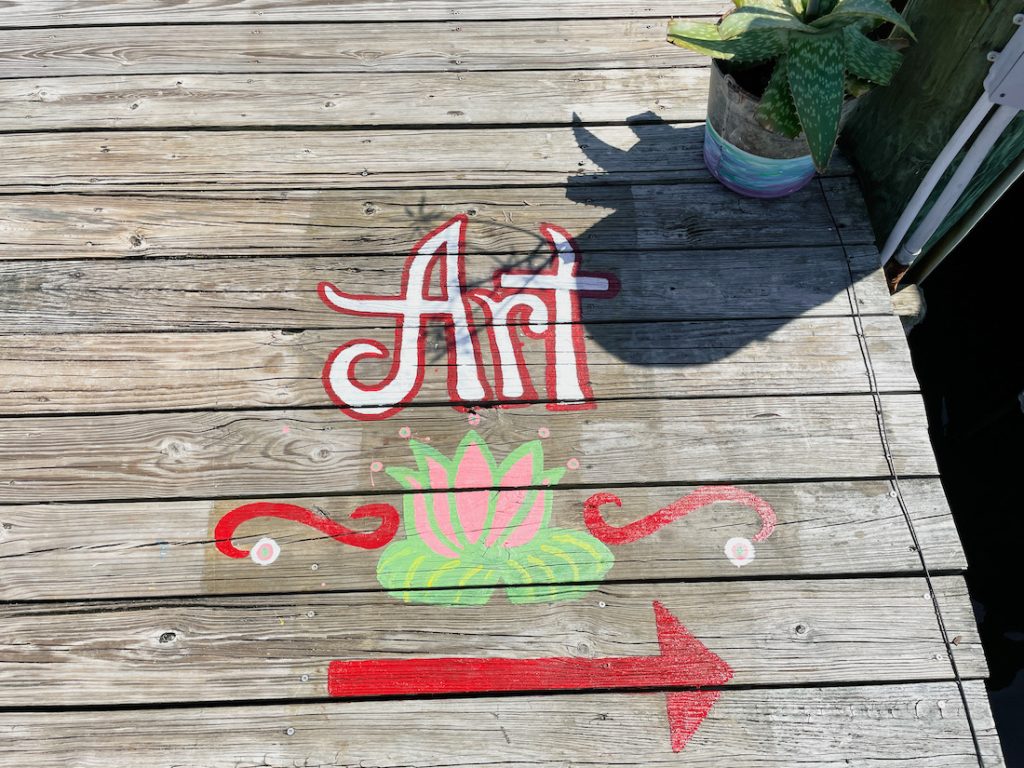