The Ocean Cleanup: Using Technology to Tackle One of the World’s Biggest Challenges – 30A 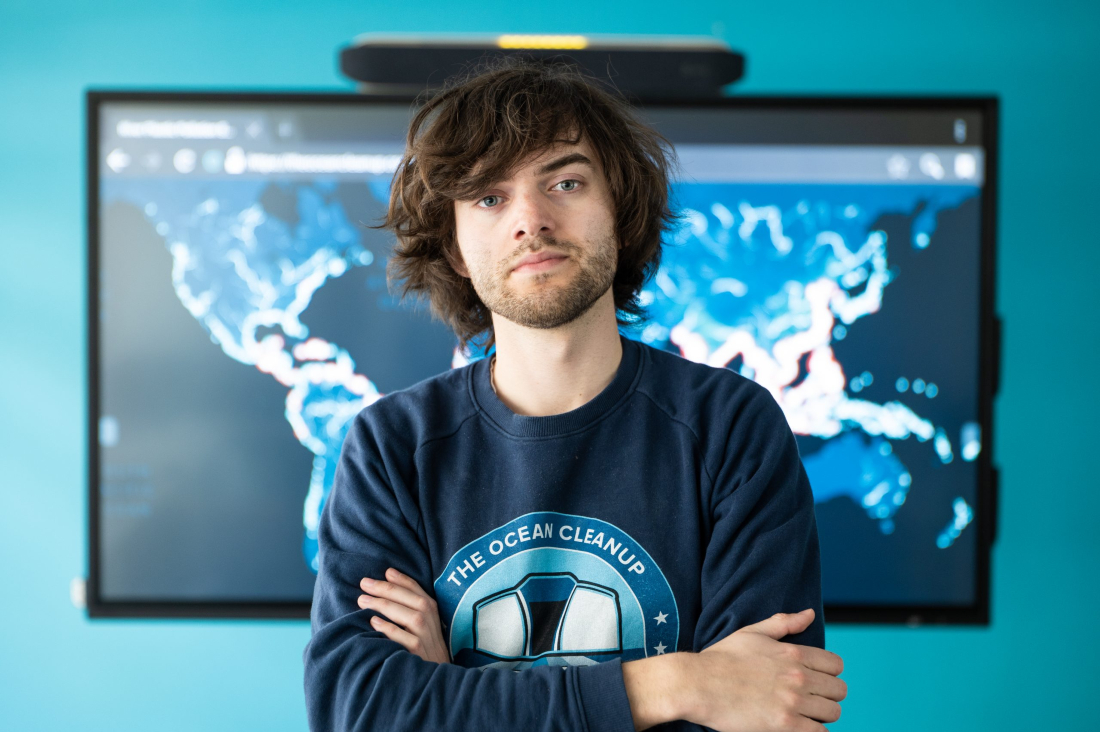 The oceans provide us with beauty, food, livelihoods, entertainment, and so much more. Unfortunately, we’re not always so fast to return the favor. Thanks to humankind’s neglect, our oceans are constantly being polluted with more and more trash. In fact, experts estimate there are currently more than 5 trillion pieces of plastic garbage in our oceans. The Ocean Cleanup wants to change that.

Founded in 2013 by Dutch inventor Boyan Slat when he was just 18 years old, The Ocean Cleanup team includes brilliant scientists, researchers, engineers, and computational modelers, who are all dedicated to designing and implementing the first feasible method to rid the world’s oceans of plastic.

The Problem Is Not Going Away On Its Own 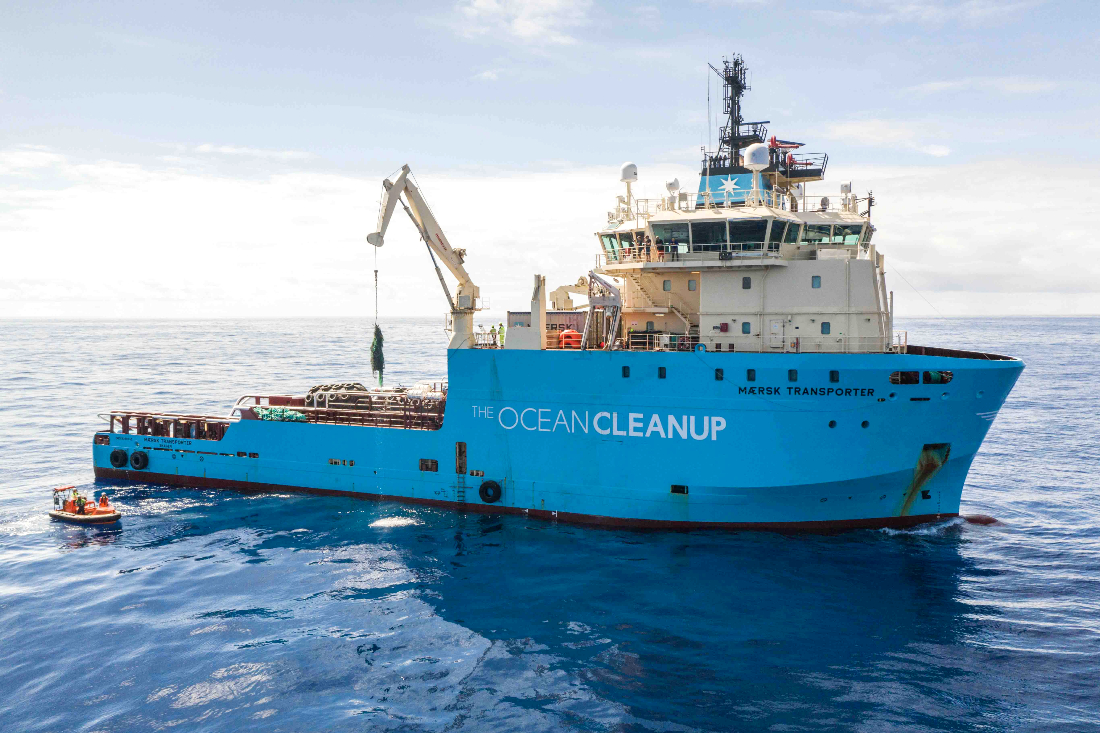 The Ocean Cleanup knows two things need to happen. First, the many ways in which plastic enters our oceans need to be eliminated. Second, we need to remove the plastic that has already made its way into the sea.

Currently, much of the plastic garbage is sizable, as it hasn’t yet broken down into “microplastics.” Microplastics are tiny pieces of plastic debris that measure less than five millimeters. Microplastics come from waste and consumer items, and they aren’t suitable for anyone to digest, especially marine life.

Nonetheless, microplastics are frequently consumed by ocean life. Some animals unintentionally eat microplastics instead of their usual prey, which ultimately leads to their starvation and death. Consuming microplastics is also known to hinder reproduction in some species, such as oysters. And of course, when we humans eat seafood (or any food, for that matter), we are also ingesting the same microplastics they ate.

Where Is All This Plastic Trash?

You may think of garbage dumps as only existing on land… but you’d be wrong. Much of our trash ends up in five giant floating garbage patches. The largest of these garbage patches is the Great Pacific Garbage Patch, which can be found drifting between Hawaii and California.

When the ocean currents inevitably push the plastic into these growing garbage patches, it will stay there for hundreds of years, unless there is a human effort to remove it. Plastic removal can be difficult though, as these patches span millions of square miles.

According to The Ocean Cleanup, the Great Pacific Garbage Patch covers an estimated surface area of 1.6 million square kilometers, an area twice the size of Texas or three times the size of France.

If an effort were made to clean up these garbage patches using traditional nets and ships, it would cost billions of dollars and take hundreds of years. A quicker and cheaper solution is needed, both for the environment and the global economy. That’s where The Ocean Cleanup comes in.

How The Ocean Cleanup Works 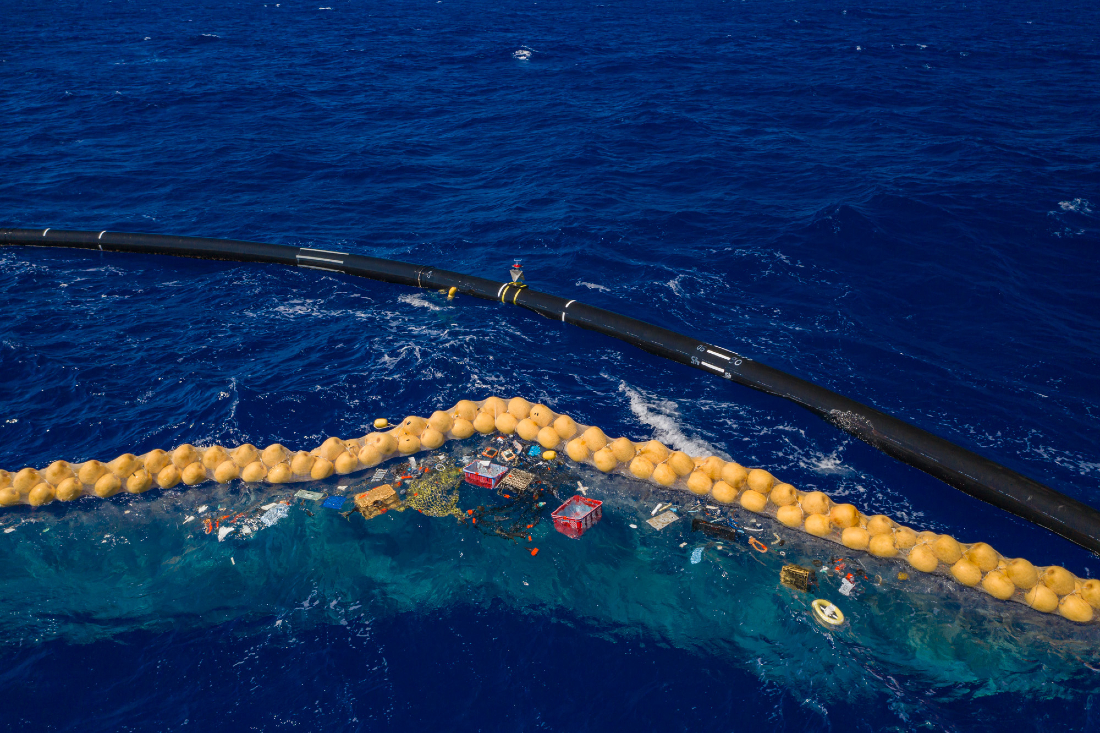 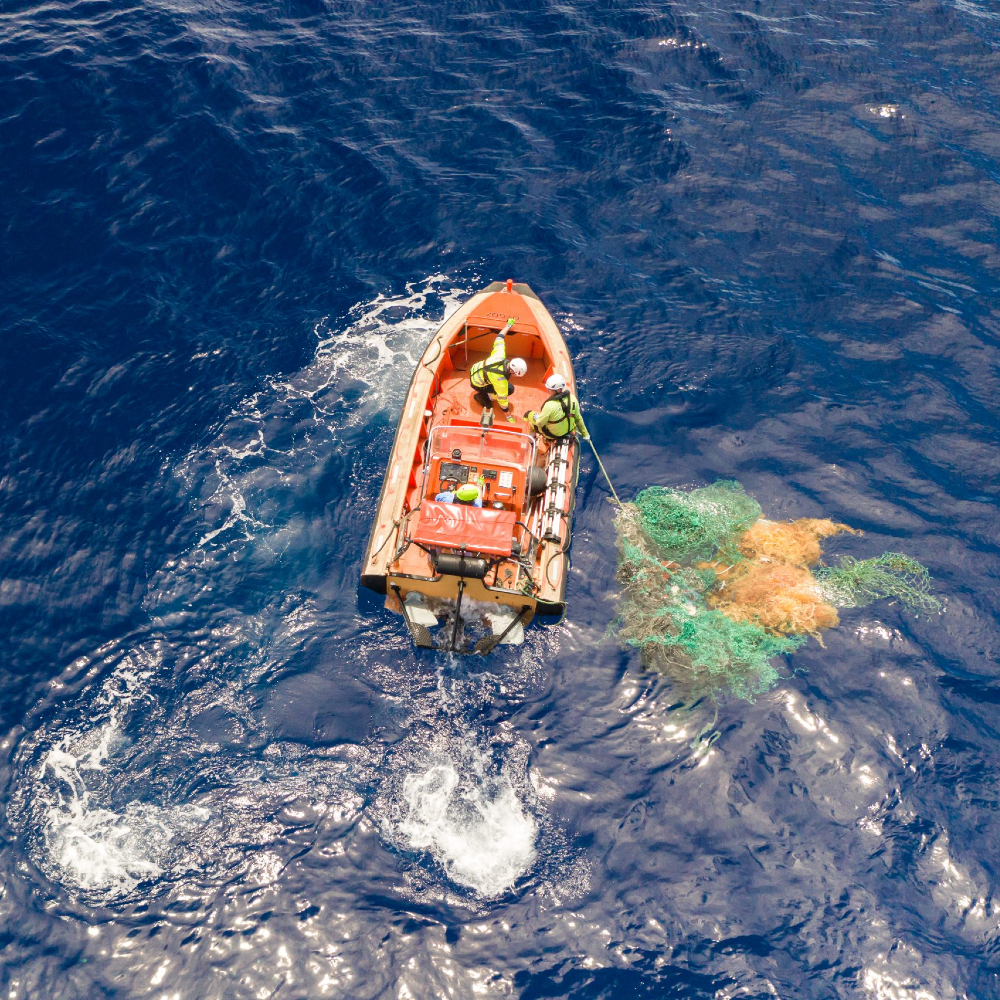 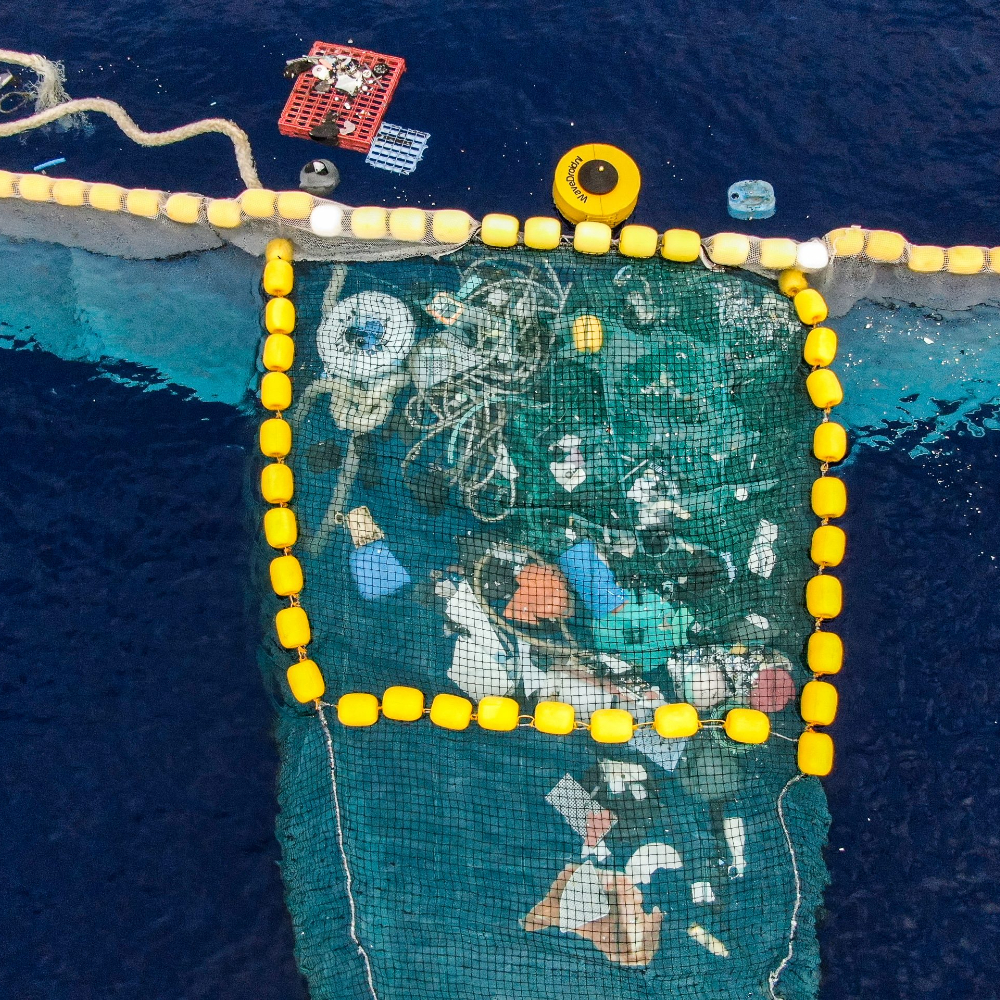 The Ocean Cleanup team has engineered new technologies designed to remove plastic from our oceans much faster and in a much more cost-effective manner.

First, a hard-walled pipe and screen – known as a “floater” – catches and contains drifting plastic garbage. The U-shaped floaters are solar-powered, buoyant, and measure one-to-two kilometers in length. They’re engineered to be flexible and resilient enough to ride the ocean’s waves and currents.

These massive floating net systems collect plastic debris as small as one centimeter in diameter. For the health of marine life, it’s critical to capture these larger pieces of plastic before they can break down into more easily digested microplastics.

The Ocean Cleanup removed its first round of polluting plastics from the Great Pacific Garbage Patch in 2019. That process led to design improvements, with a new system scheduled to deploy this year. As more money is raised for the project, more and more floaters will be added.

But That’s Only Half The Battle 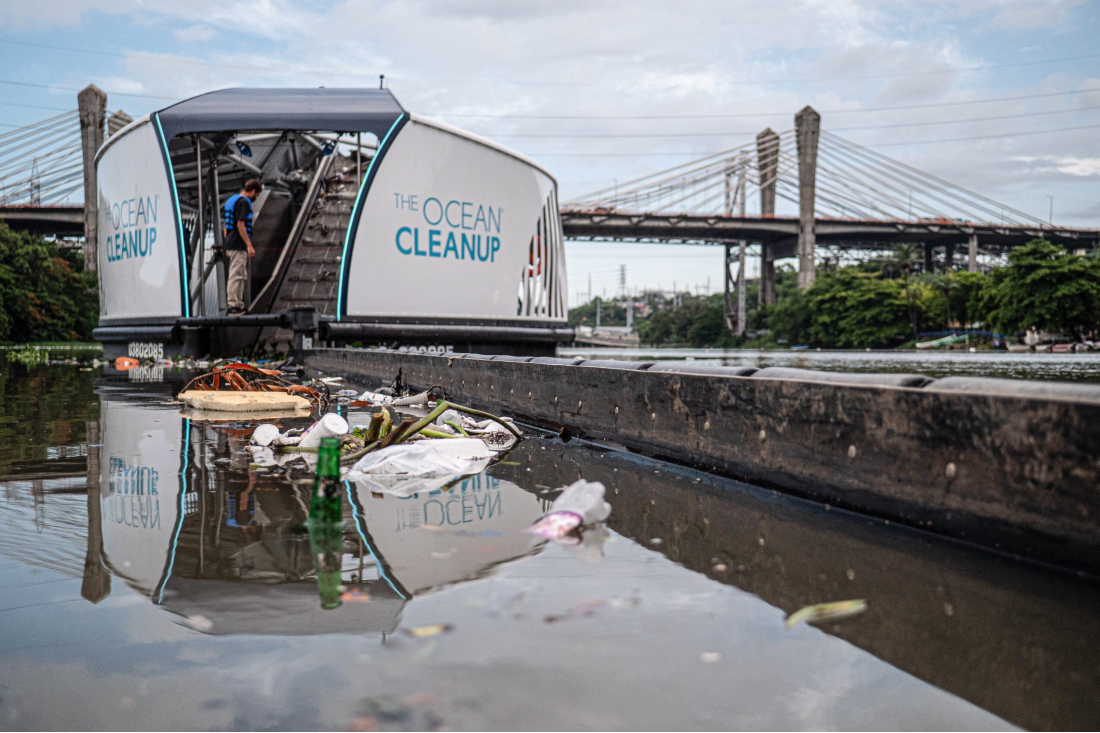 Comprising 71 percent of the Earth’s surface, the oceans span such a large area that the Pacific Ocean alone is roughly the size of all land put together. Plus, organizations trying to clean trash from the ocean aren’t just working with the surface – they have to collect underwater, too. Given that the Pacific Ocean’s average depth is 13,213 feet, there are plenty of places for garbage to hide.

While The Ocean Cleanup continues to remove plastics from the oceans, they also want to intercept plastic before it reaches the sea. Their goal is to remove 80 percent of plastics from 1,000 rivers across the planet before those pollutants can even reach the oceans.

To help with this goal, The Ocean Cleanup has built a machine called The Interceptor, which uses a river’s natural current to collect debris and is 100 percent solar-powered.

A single Interceptor is capable of removing 110,231 pounds of plastic every day.

Right now, three Interceptors are in operation, with prototypes operating in Indonesia, Malaysia, and the Dominican Republic. The Ocean Cleanup is working with governments to place Interceptors in additional locations, intending to reach 1,000 rivers in five years.