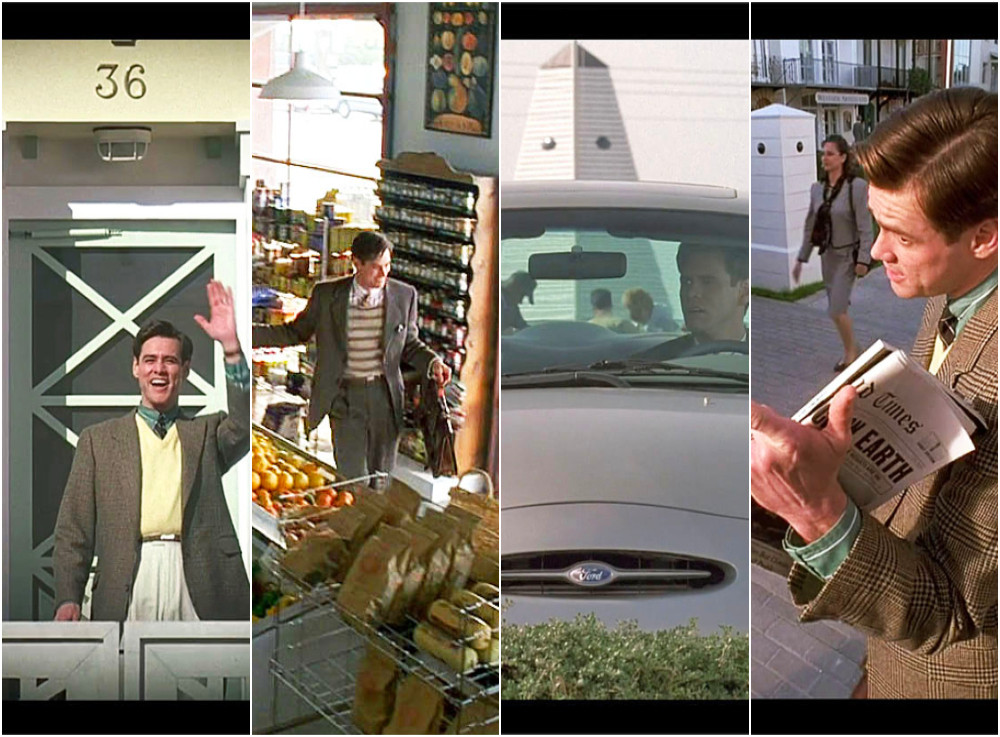 Crossing into Seaside’s town limits feels like entering a movie set. Each home has a distinctly different version of a white picket fence. Pastel homes with deep porches sink into the shade of gnarled scrub oak and skinny white sand pathways provide secret passage throughout this tiny beachside enclave. It’s the perfect version of small-town Americana.

Director Peter Weir’s wife felt the same way when she scouted Seaside for what would become the hit movie, The Truman Show.

With a bit of “movie magic” buildings were added and a bustling downtown was created, but you can still visit many spots from the iconic Jim Carrey film. Here are a few of our favorites.

Once the home of Seahaven Life & Casualty, this quiet park is surrounded by small boutiques and art galleries. An intricate gate now shelters the parks entryway and the Life & Casualty building site is now home to small rolling hills and a trail that snakes through oak and pine trees. The Rubeo Architects sign from the movie still hangs from one of the buildings. See if you can spot it. 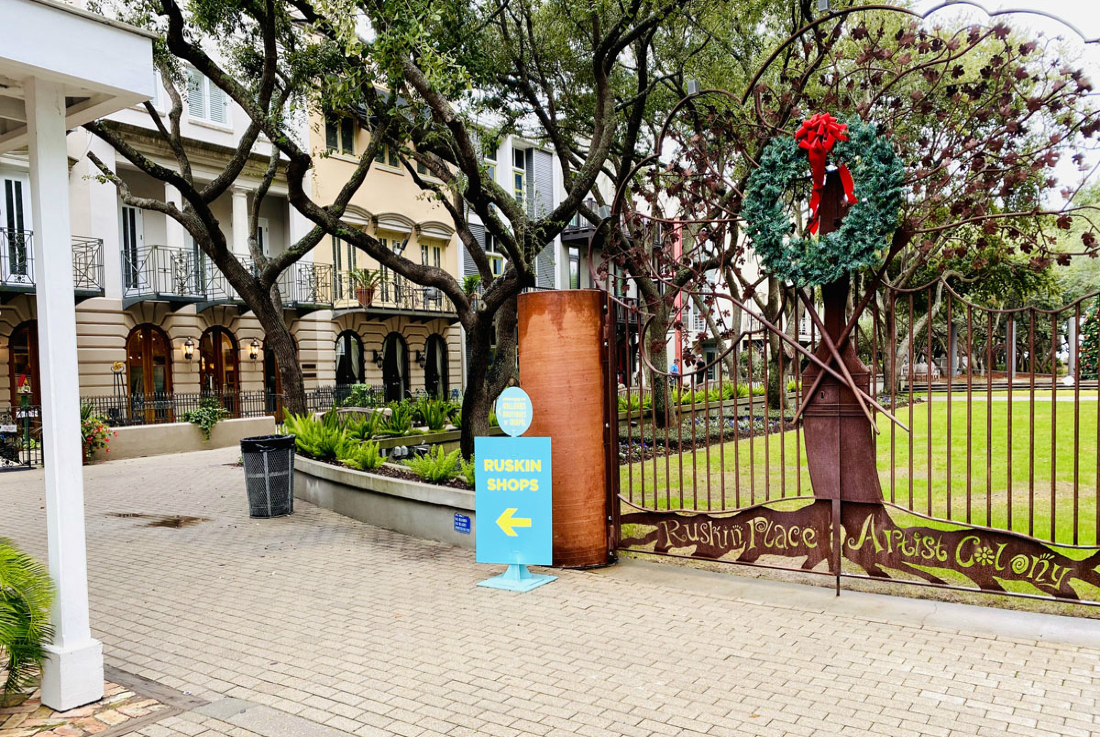 The double doors that face Ruskin Place can still be seen today. 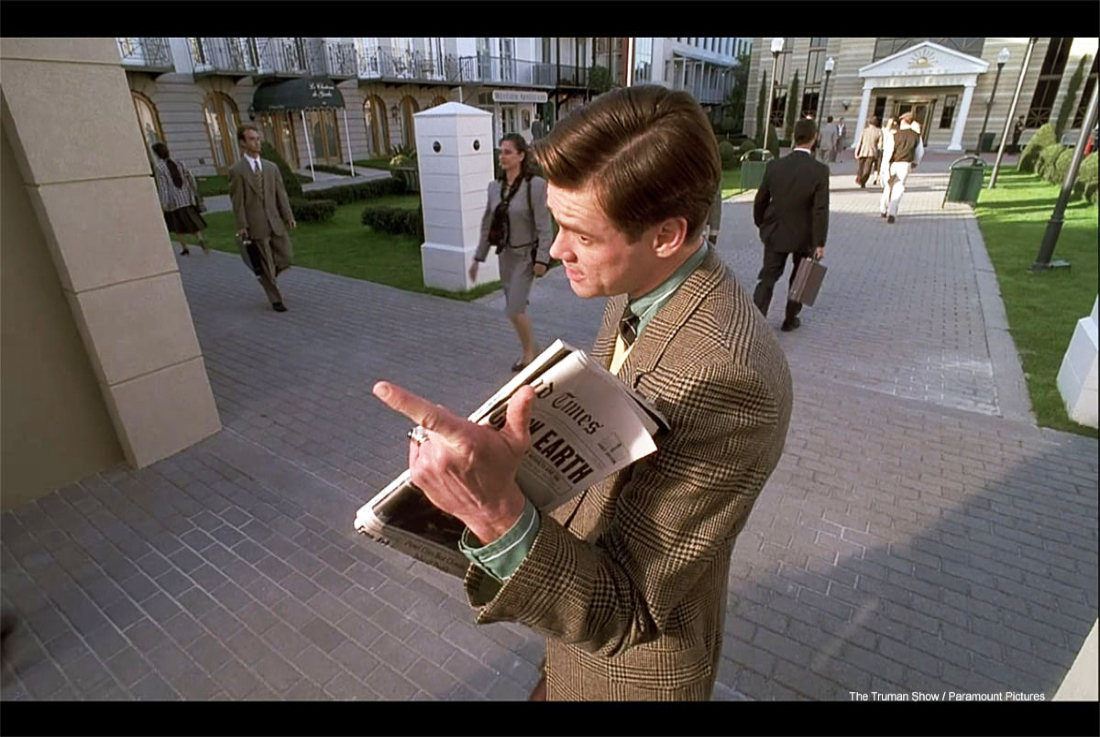 The bustling grocery store from The Truman Show is as busy as ever. The leaning ladder that Charlie Modica, Jr. was filmed standing on remains (as does Charlie Modica, Jr. You can usually find him behind the deli counter). And you can snap your photo in front of an official movie poster if you’d like. 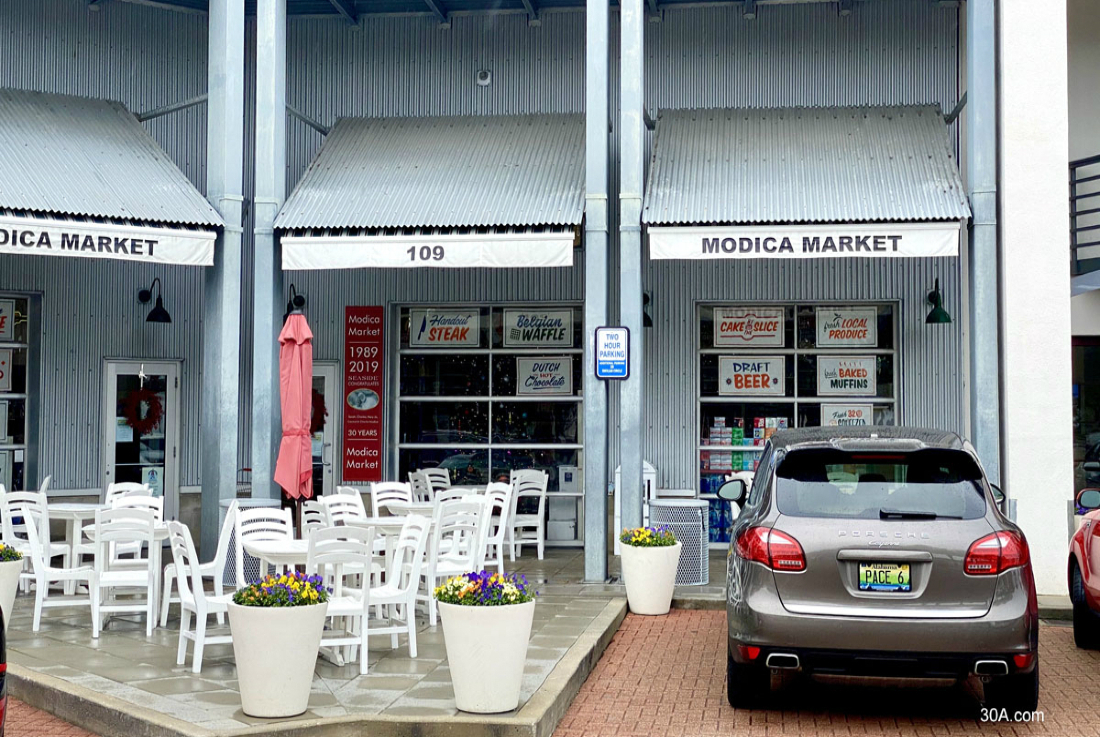 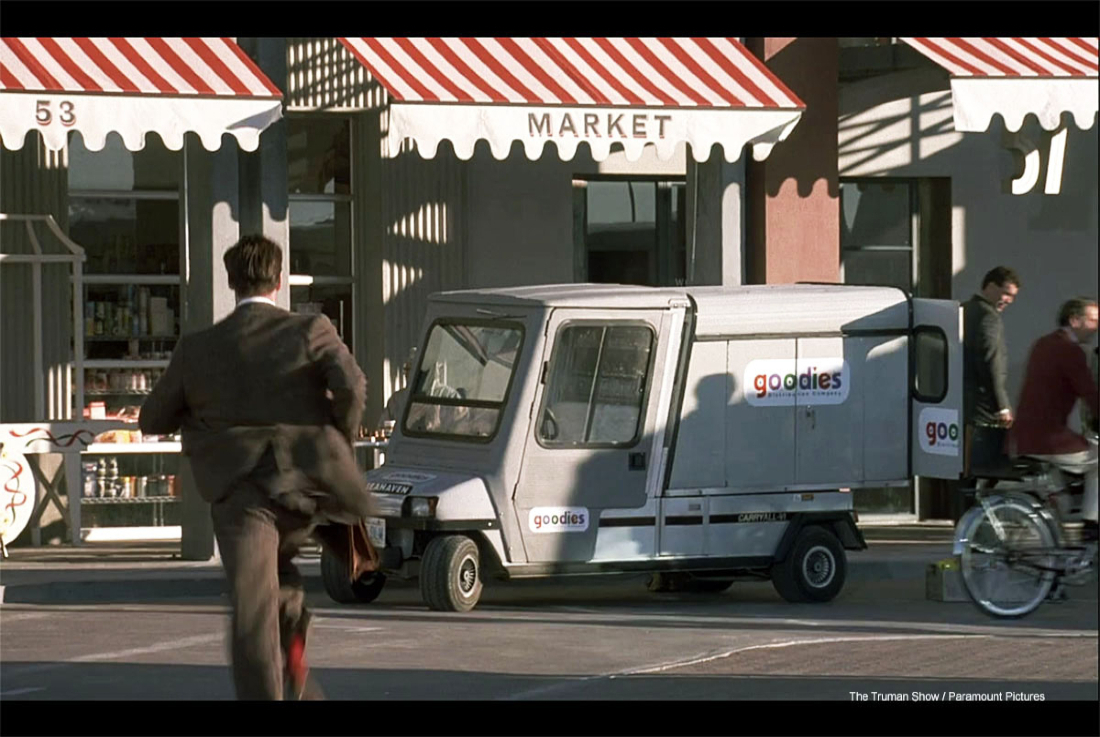 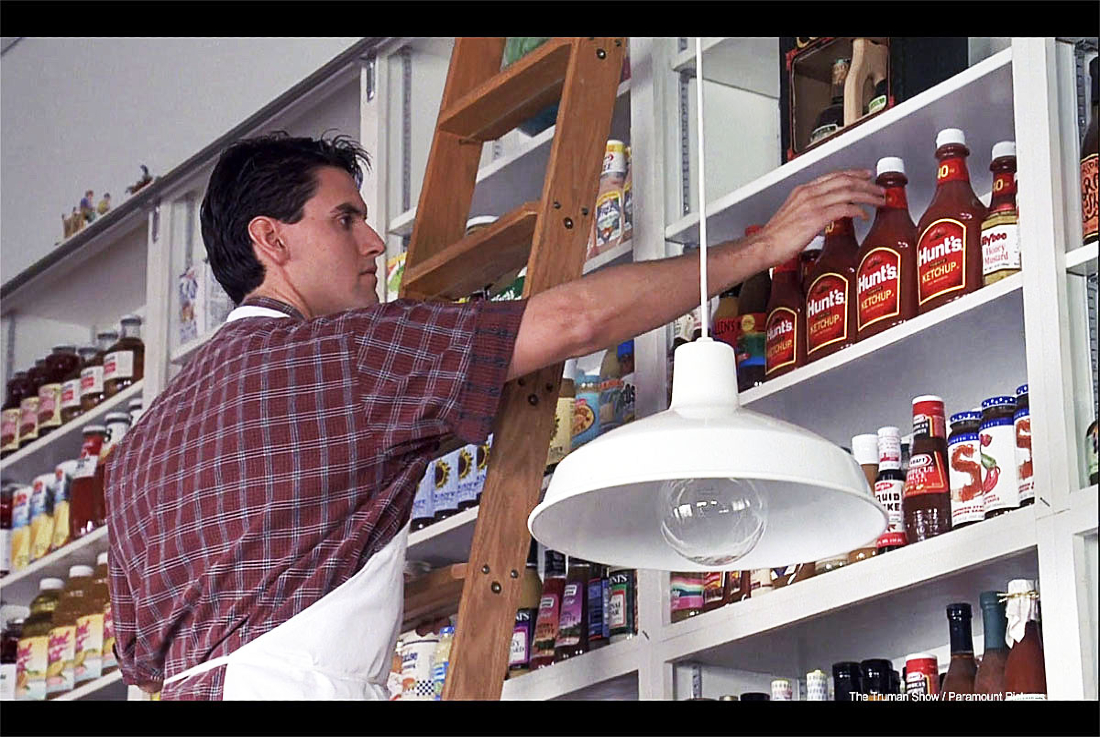 Charlie Modica in a famous scene from the movie 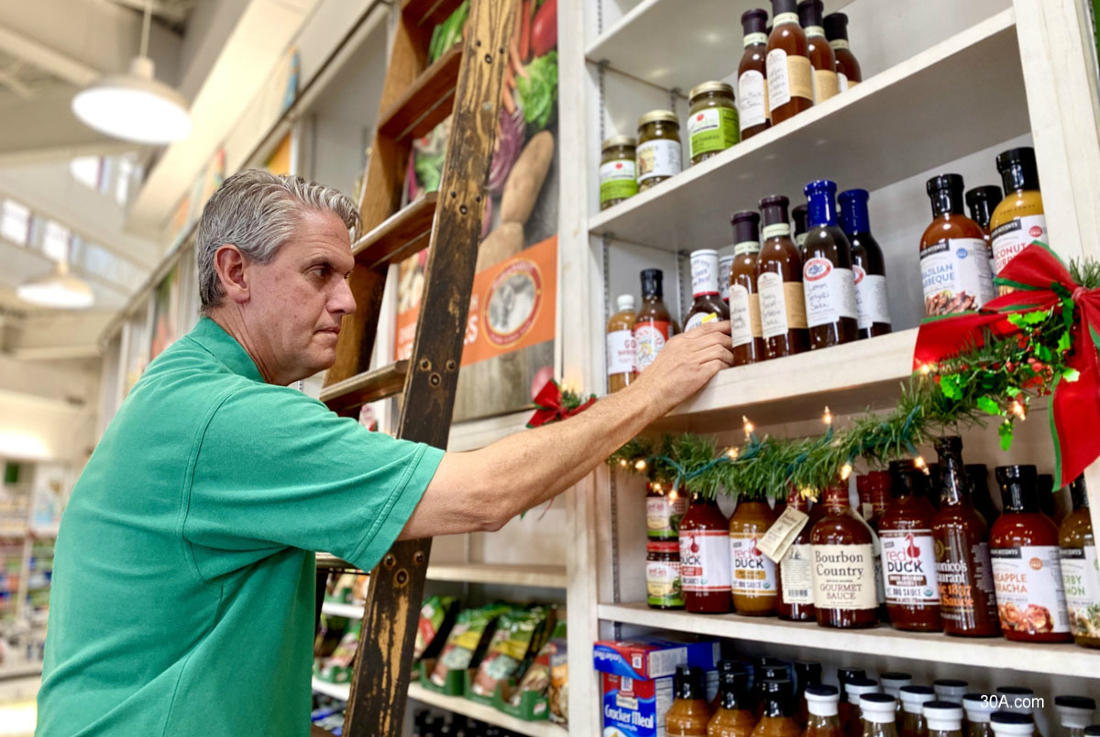 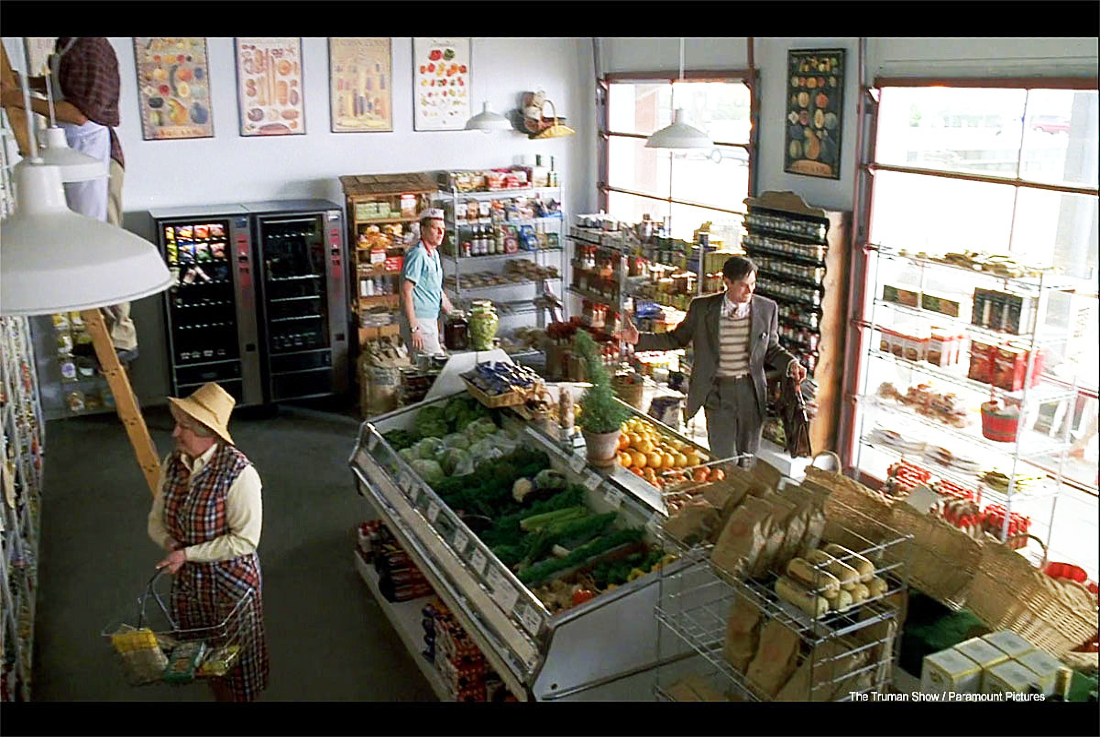 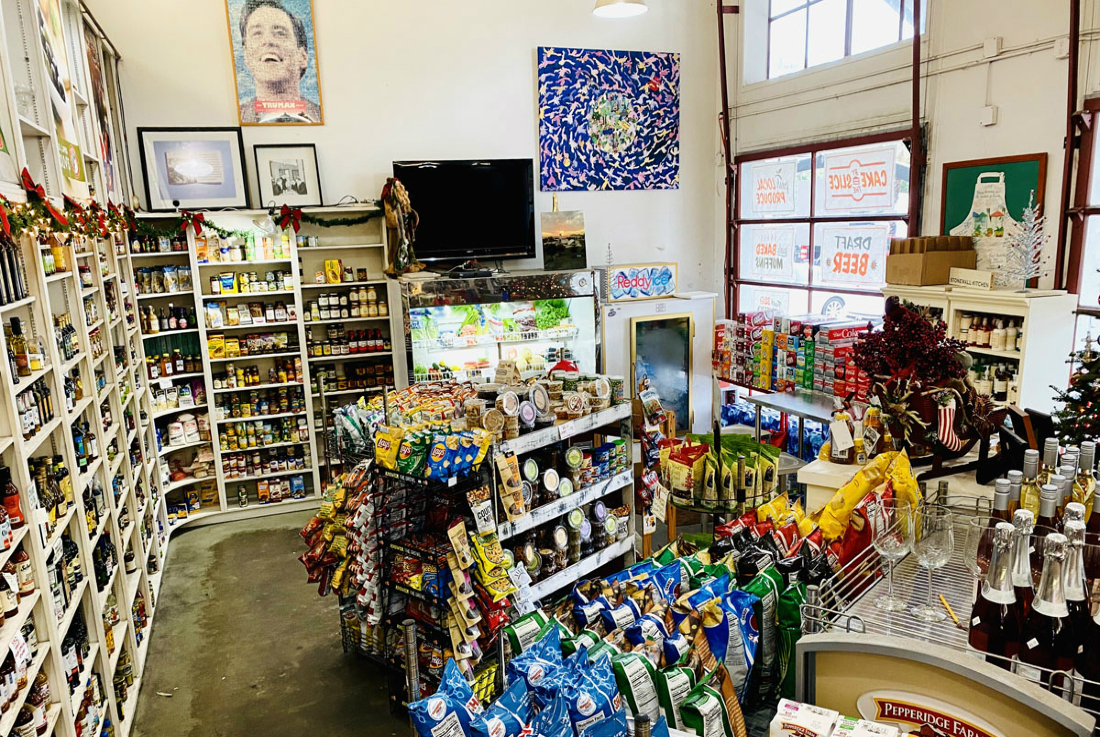 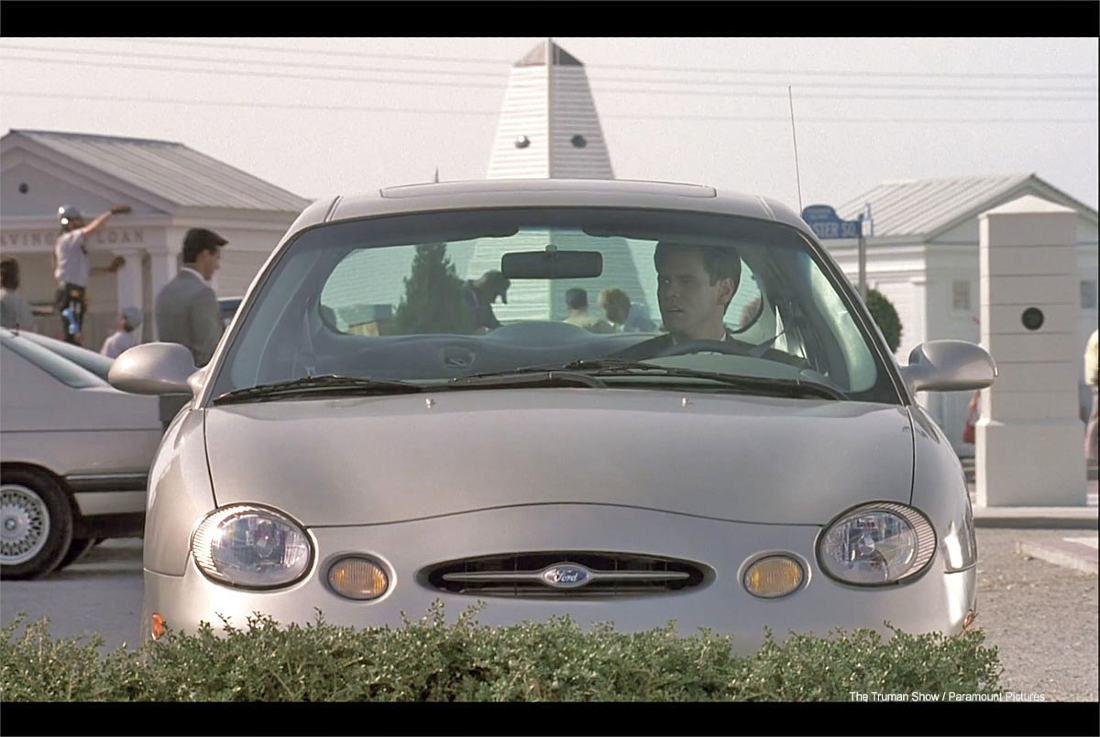 Seaside’s iconic Coleman Tower, as seen in the movie.

Throughout the movie you can catch glimpses of one of Seaside’s most iconic structures, the Coleman Tower. During the holidays, Seaside strings the entire tower with white lights. Year-round, it serves as a public beach access to all.

The Seaside Post office has moved locations since the filming, but the building essentially remains the same. It is one of the most photographed spots in town. Have some fun and mail a loved one a postcard from “Seahaven” the next time you’re in town. 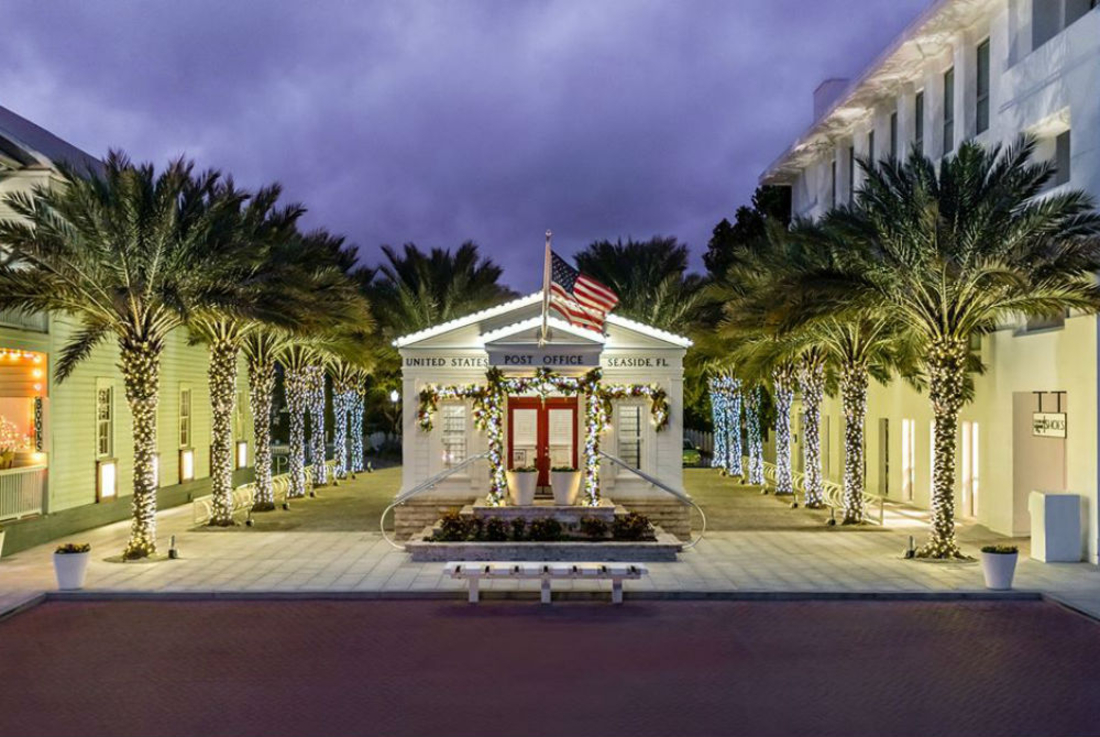 Although something of a moving target, Seaside’s Post Office is one of the most photographed in the world.

When the truth of his situation begins to sink in, Truman panics and begins to drive around and around and around the small gazebo on Tupelo Street. Grab a bike and have some fun circling it yourself. Oh, and fun trivia fact, the Town Founders of Seaside, Robert and Daryl Davis, were married in the gazebo. 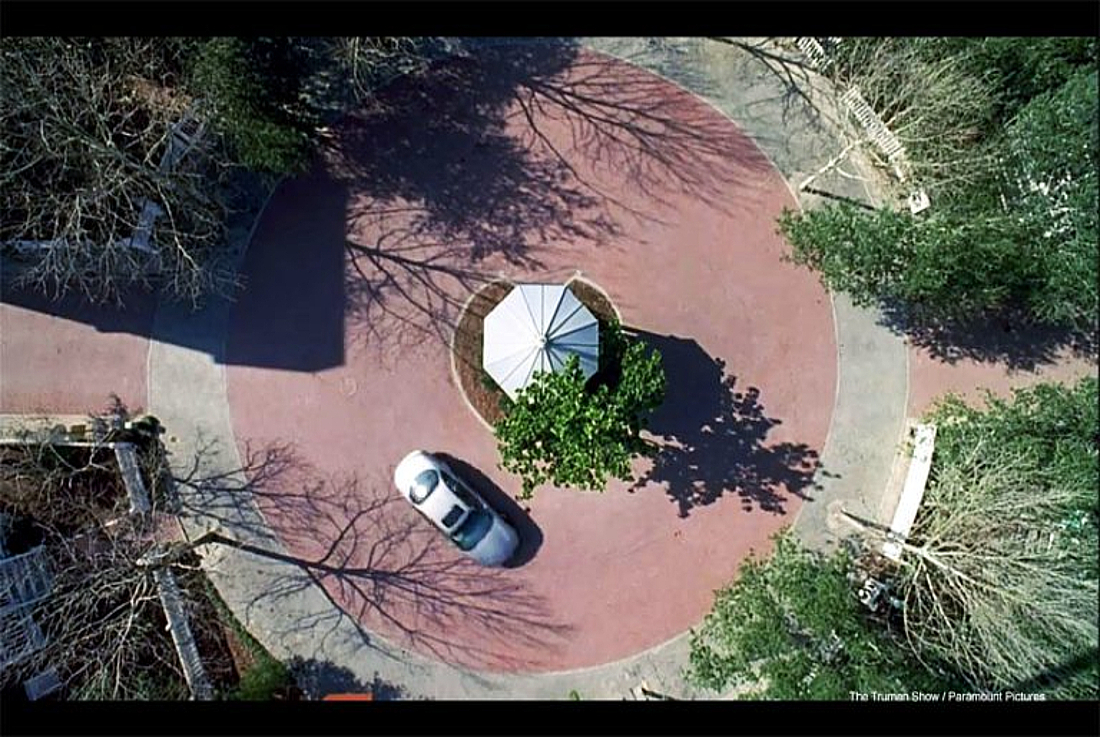 The Gazebo on Tupelo Street, as seen in the film. 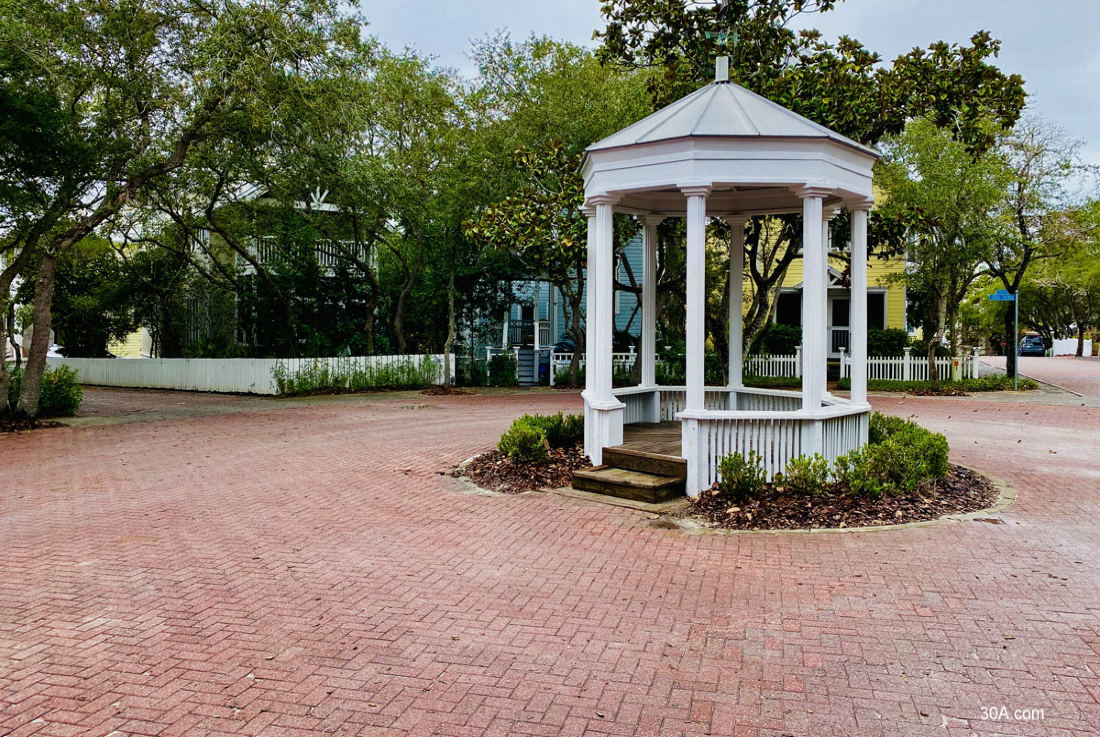 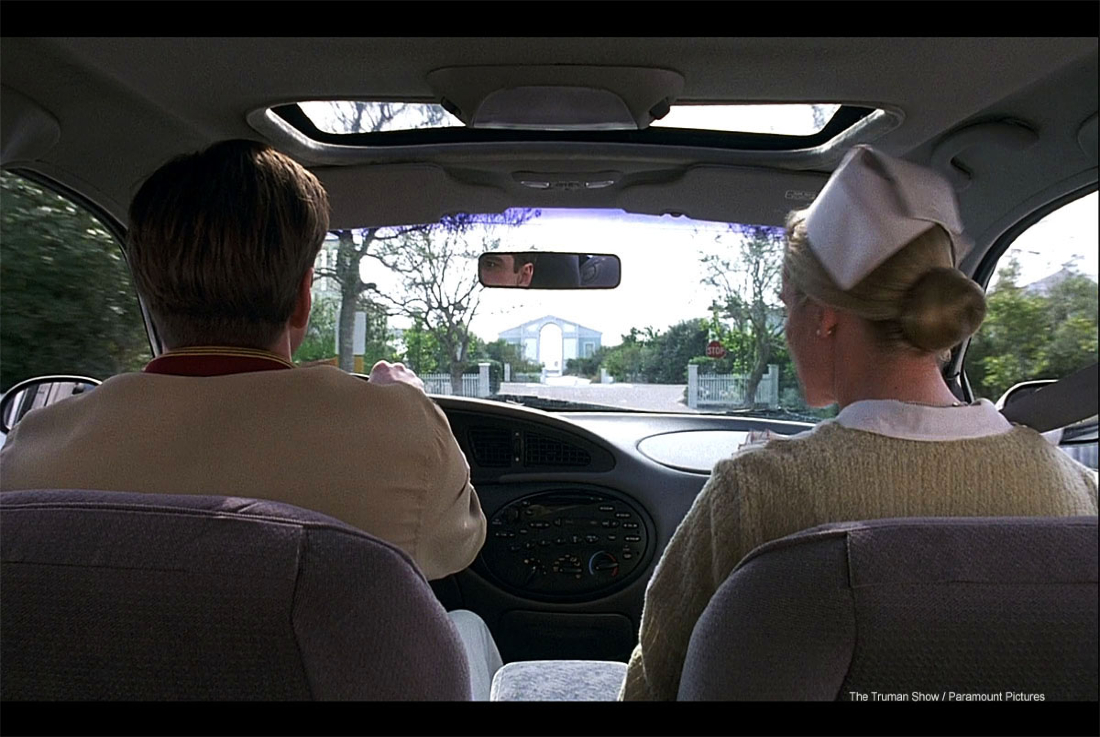 A scene from the film facing Seaside’s Tupelo beach access. 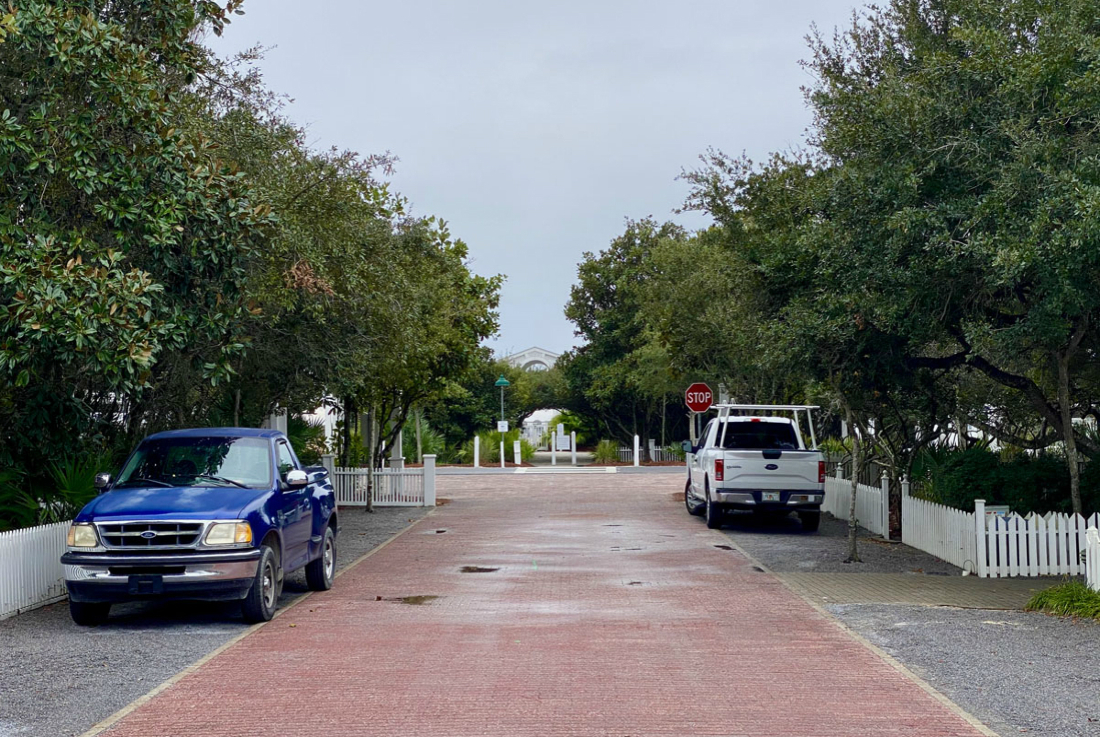 The Gazebo on Tupelo Street, as seen in the film.

Don’t let the movie address confuse you, The Truman House can be found at 31 Natchez Street. The owners have kept the house number 36 from the movie above the door. It’s a great place to say a “Good morning! And in case I don’t see ya — good afternoon, good evening and good night!” 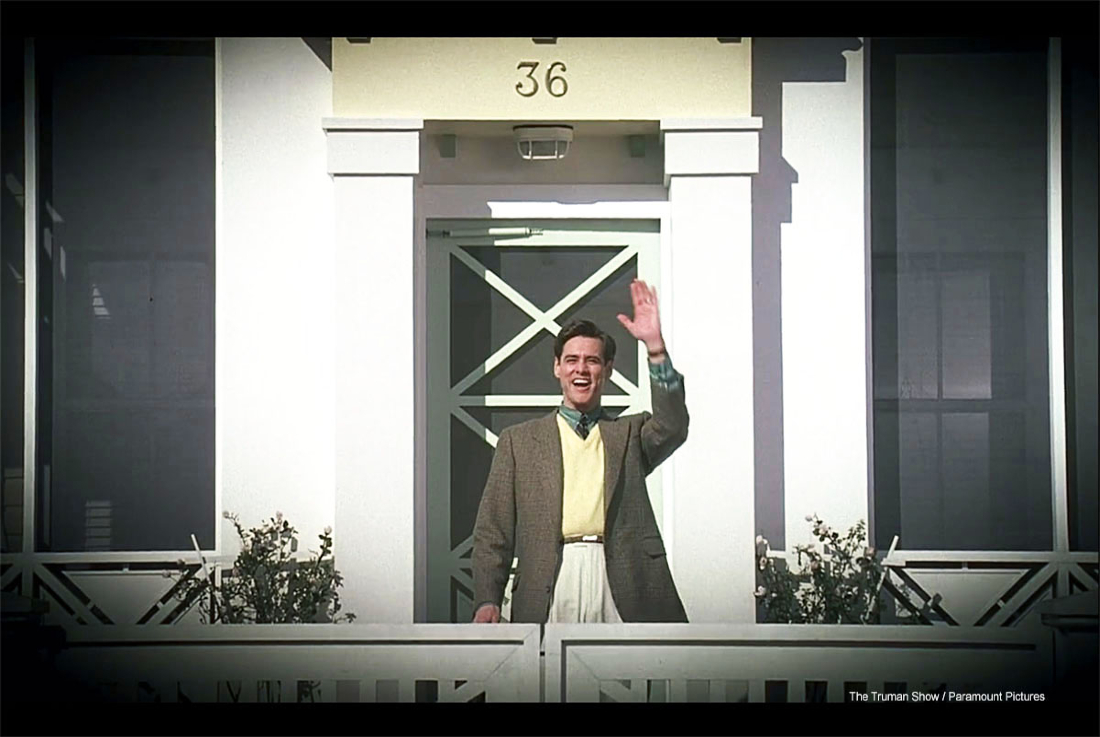 Jim Carrey’s iconic scene featuring what has become known as The Truman House. 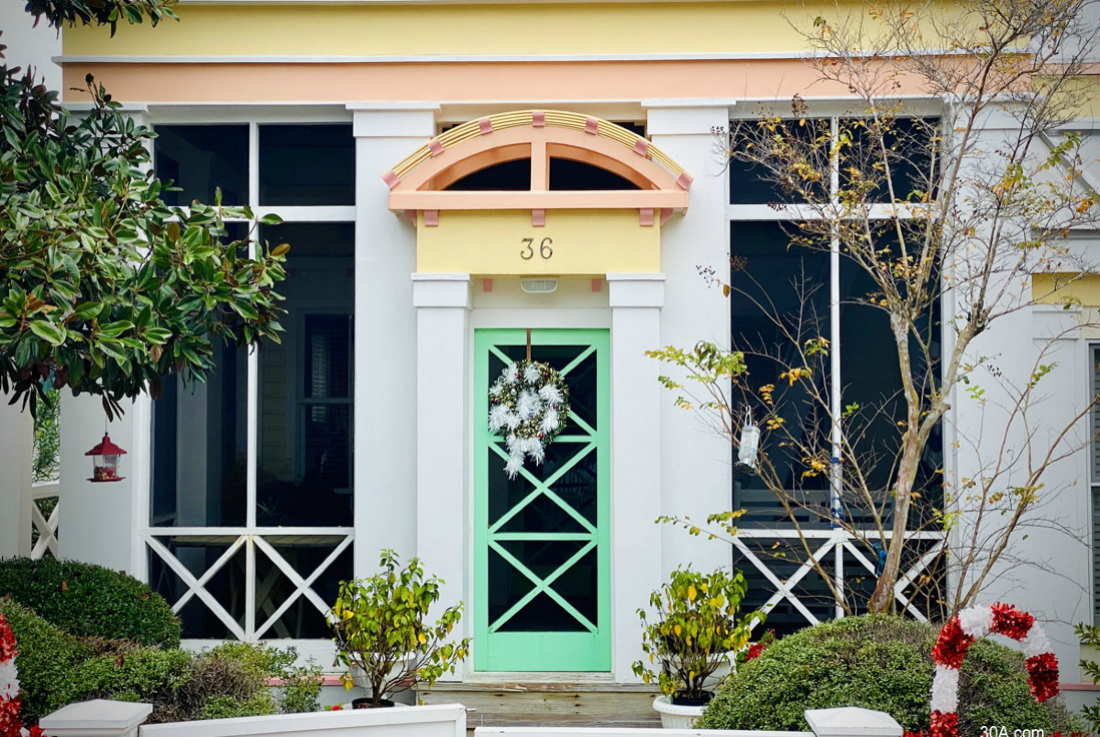 The Truman House as it stands today. 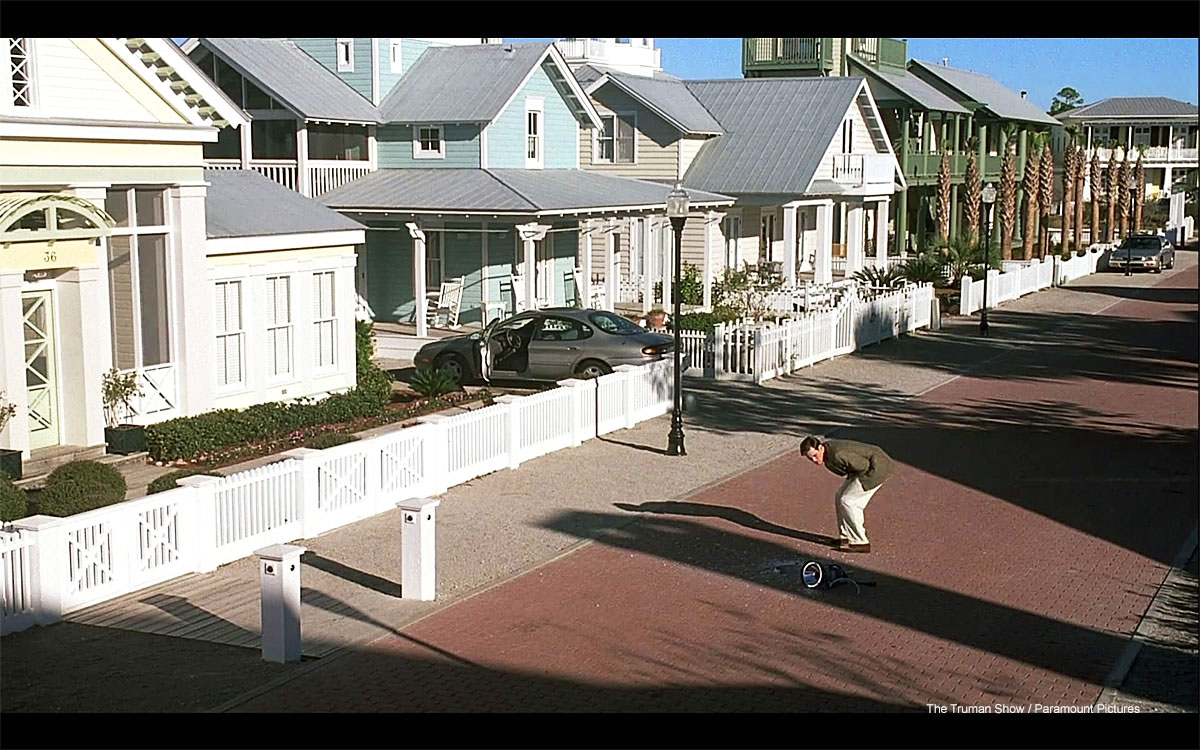 Truman’s street in the movie. 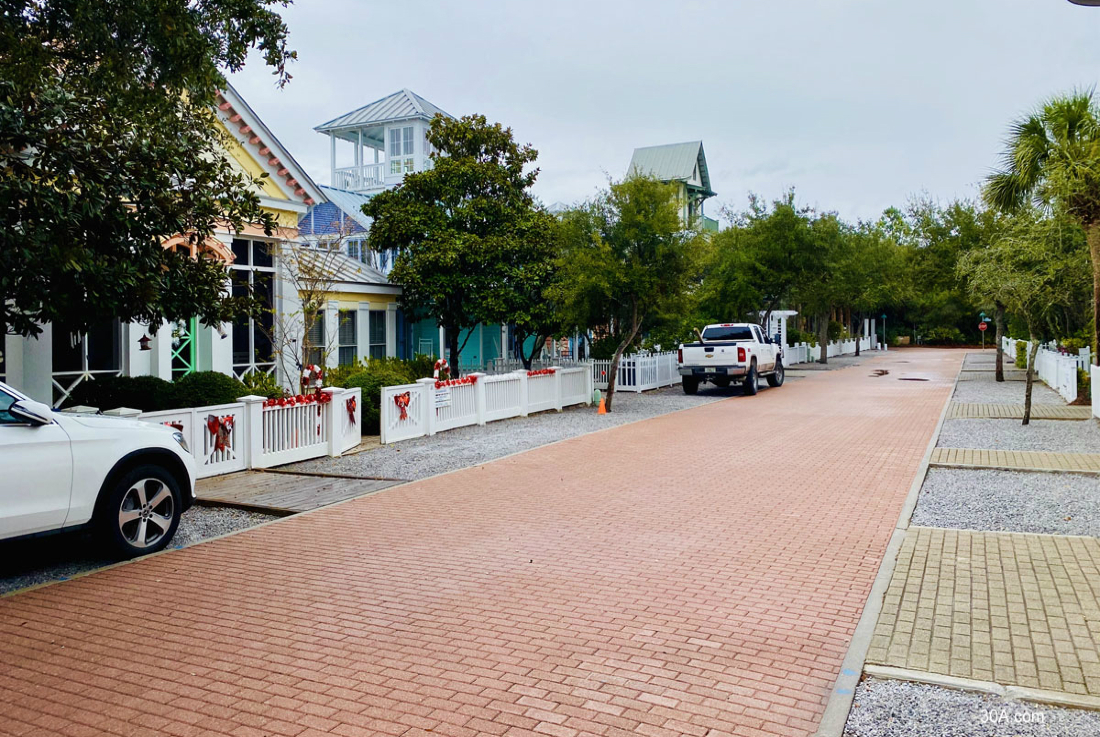 In and Around (and Above) Town

If you’re a true fan, you’ll recognize many other places that make a cameo in the movie. 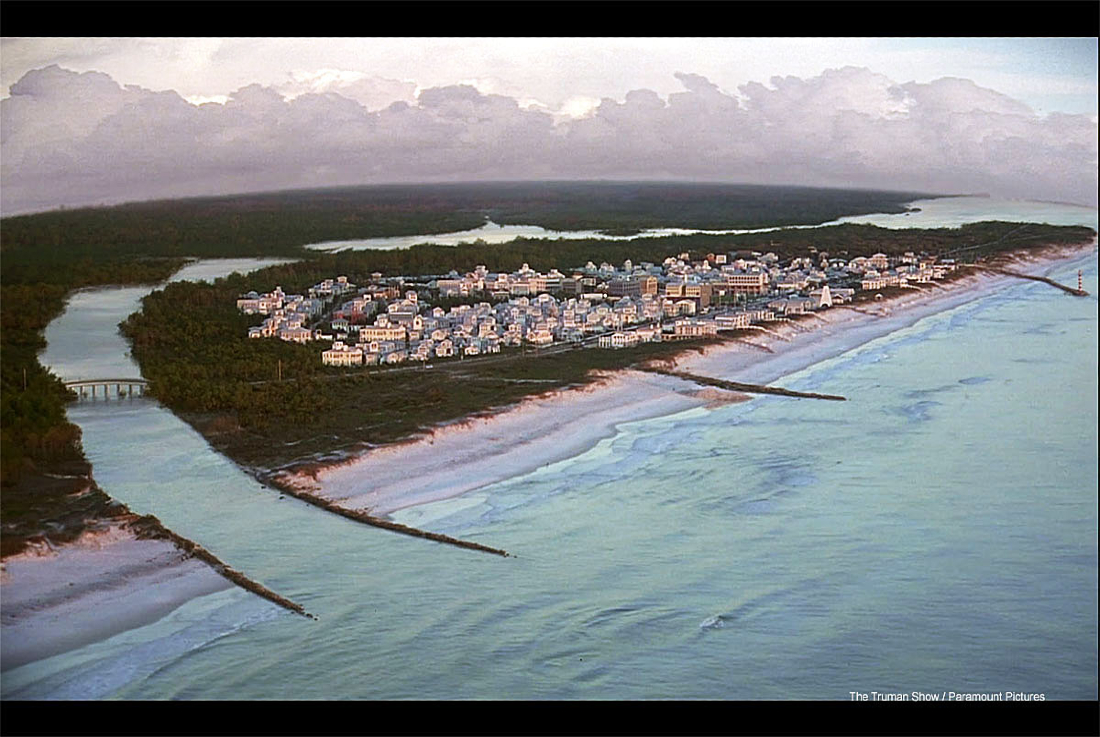 The fictional town of “Seahaven,” as seen from the sky (or dome top). 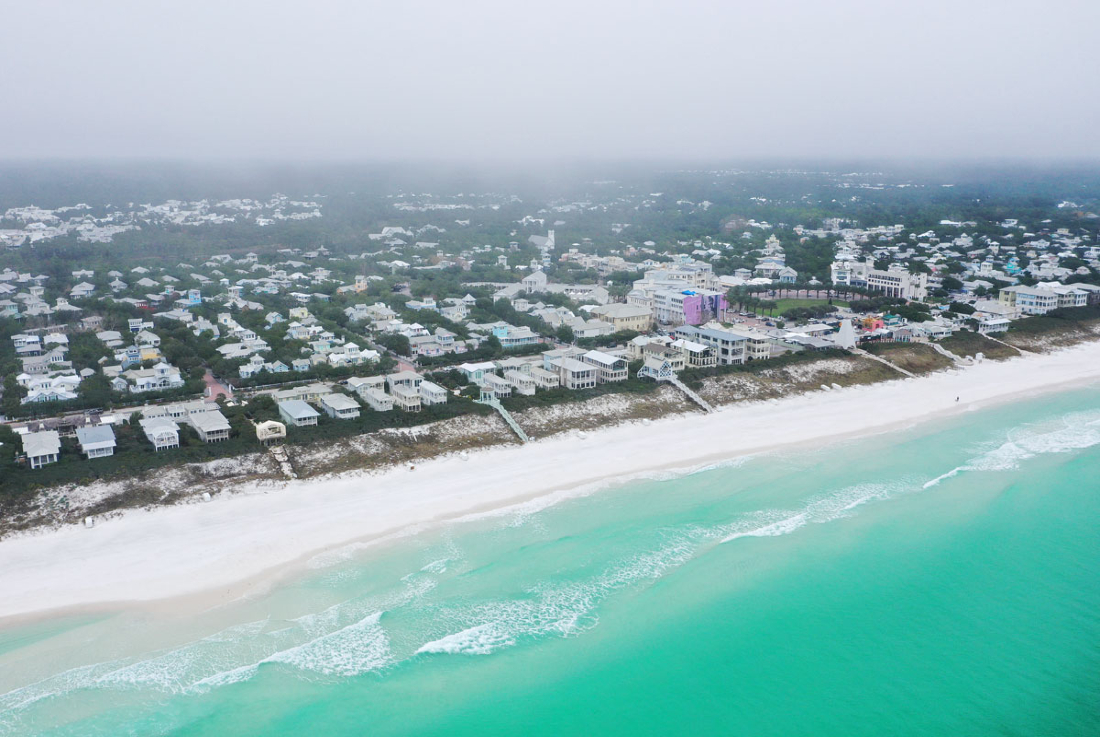 While not on an island, the town of Seaside arguably exists in a “bubble.” 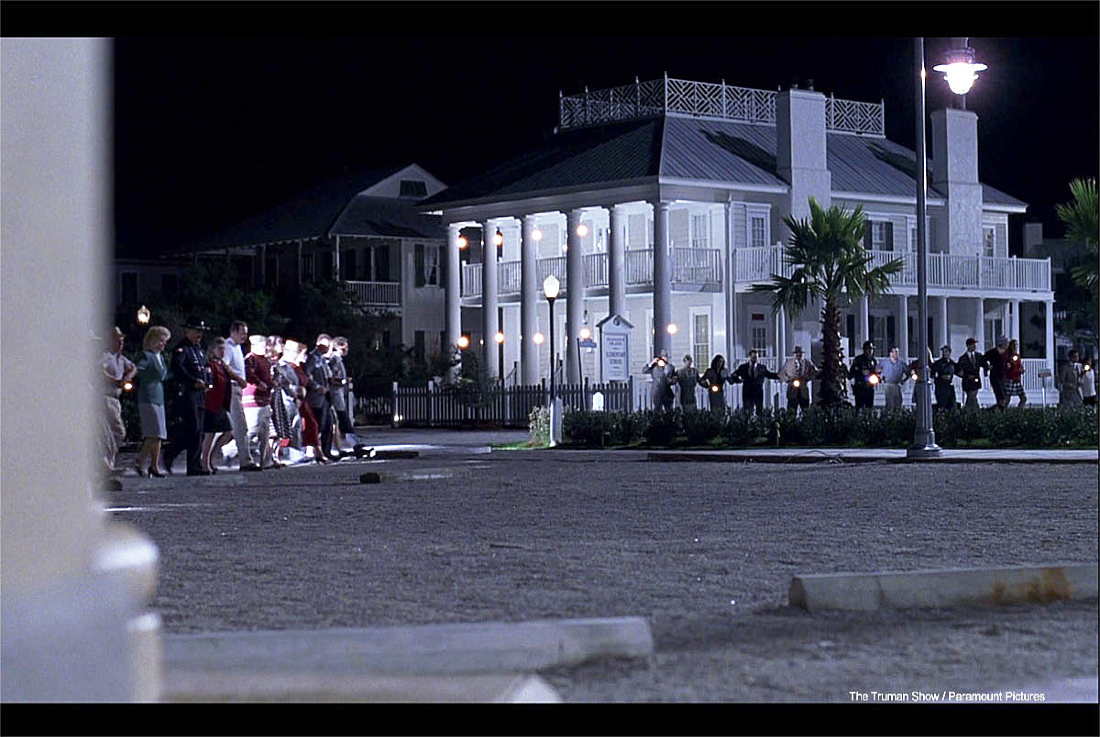 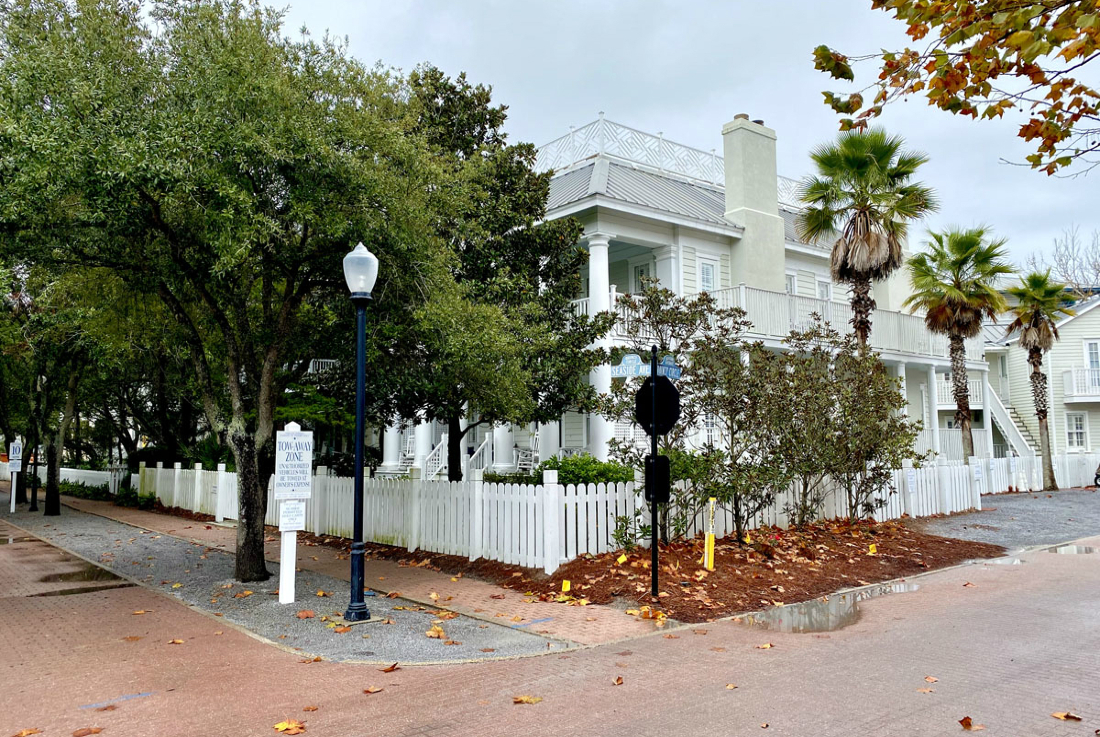 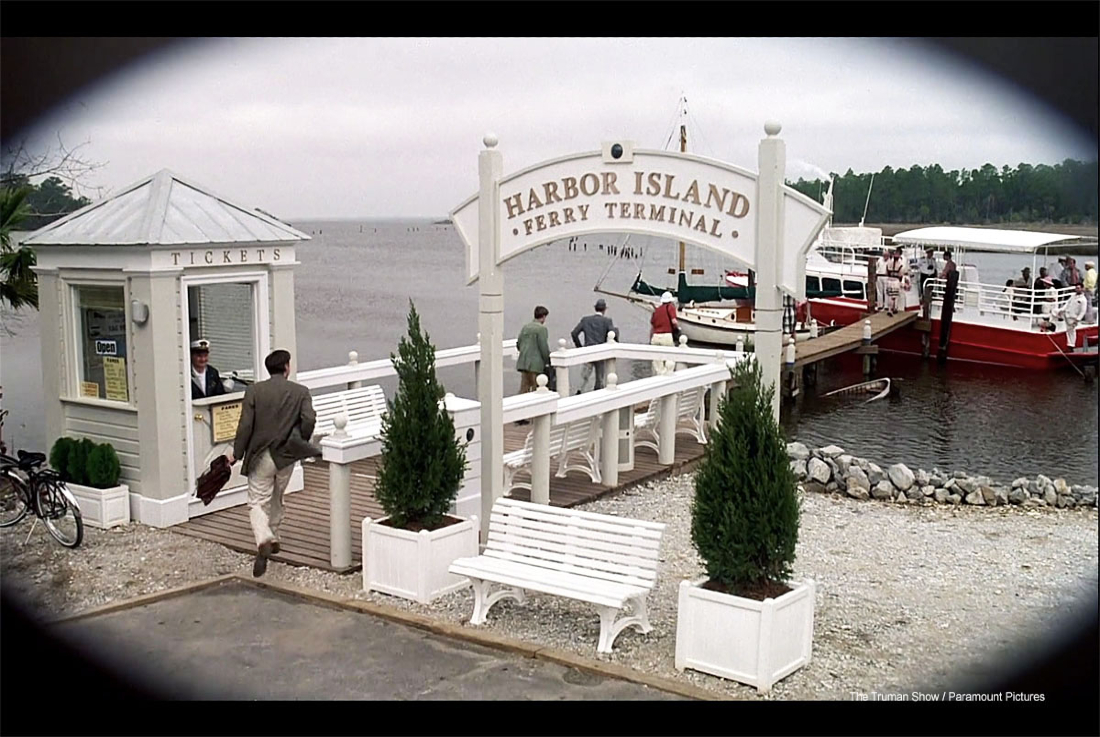 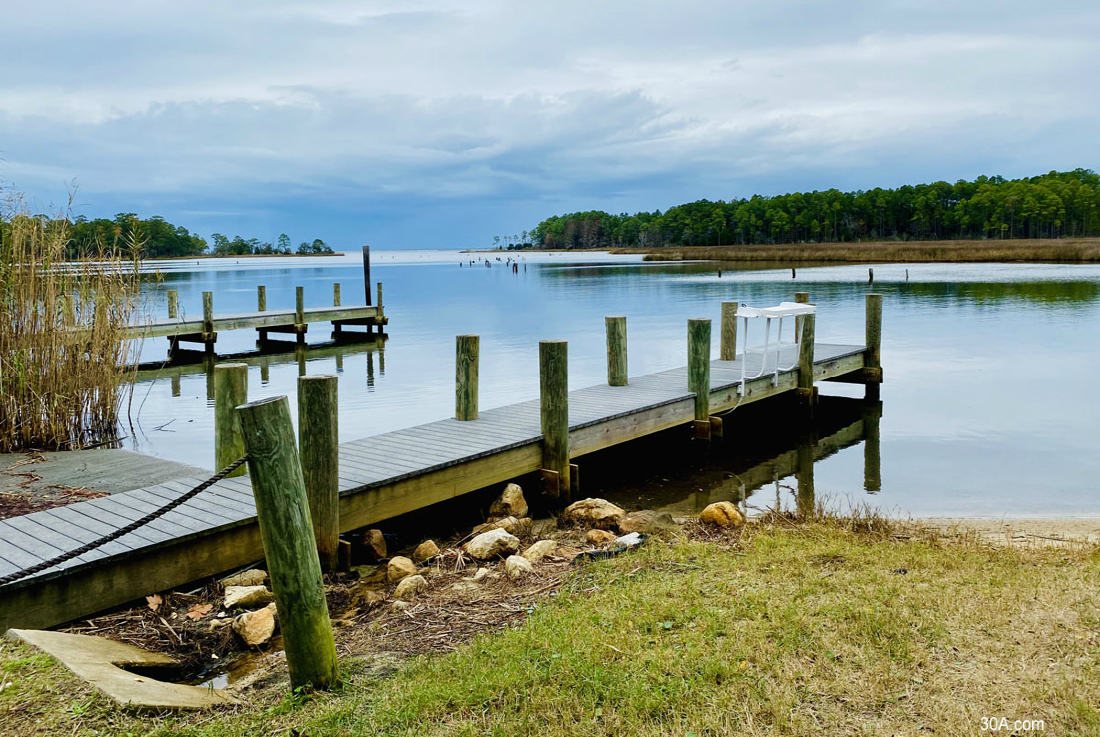 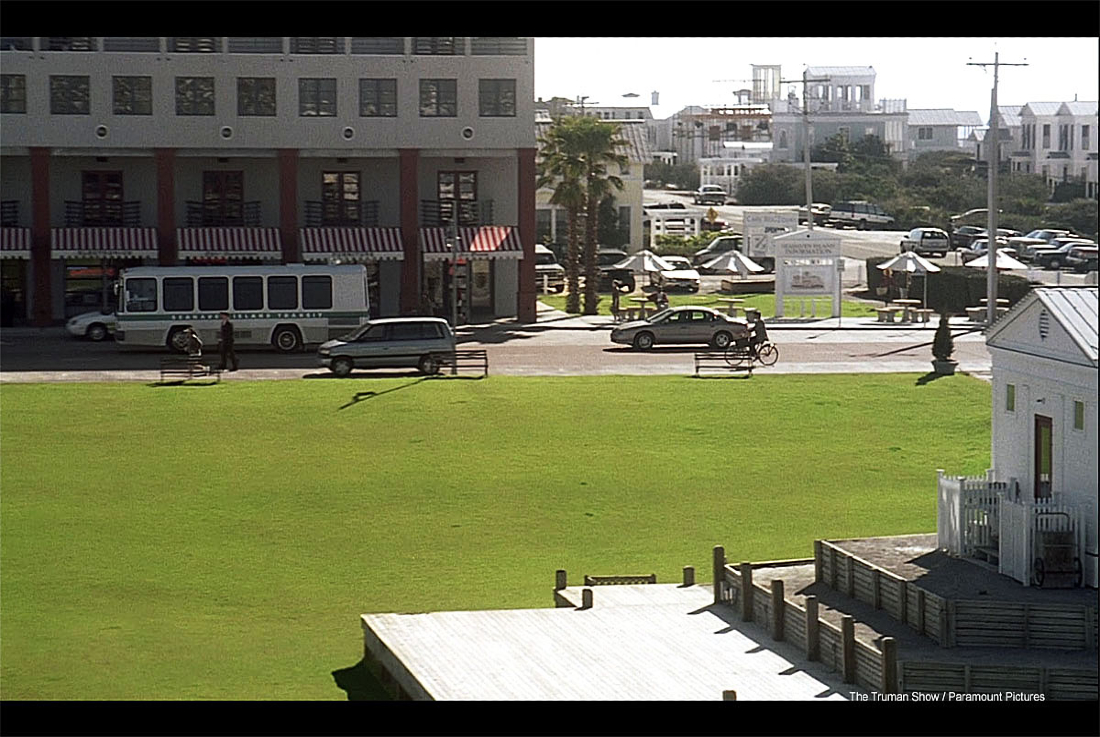 Seaside Central Square Amphitheater as seen in the movie. 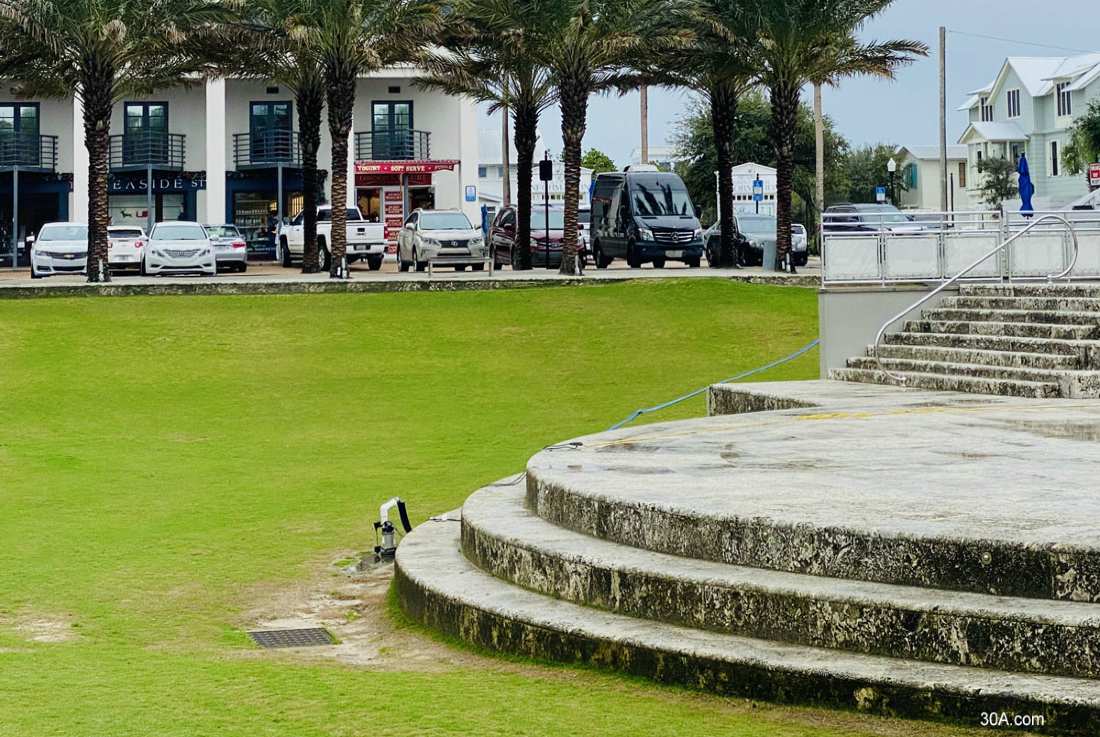 Many locals have fond memories of the filming and interacting with the crew all those years ago. Bud & Alley’s owner Dave Rauschkolb was cajoled by Wendy Weir into a small speaking part in the film.

“She finally got me to say yes and Jim Carrey made fun of my lack of acting skills,” he said. “I still get a small residual check from time to time.”

Charlie Modica, Jr. and his family still own Modica Market and can be found there daily as well. 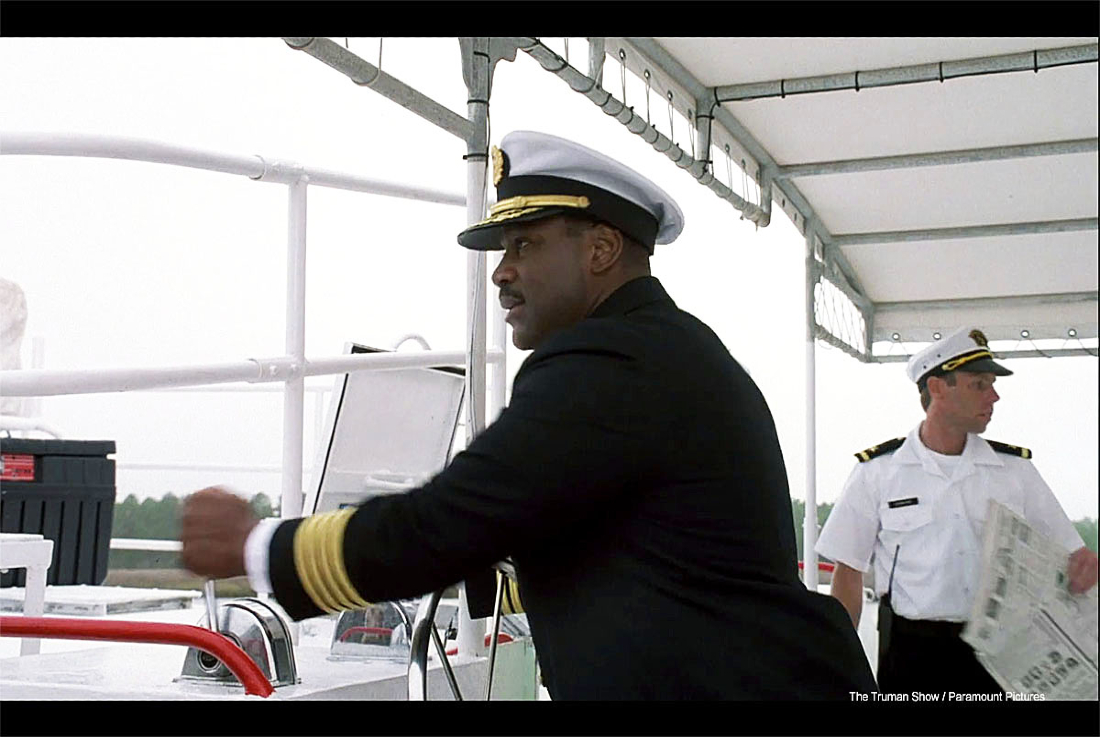 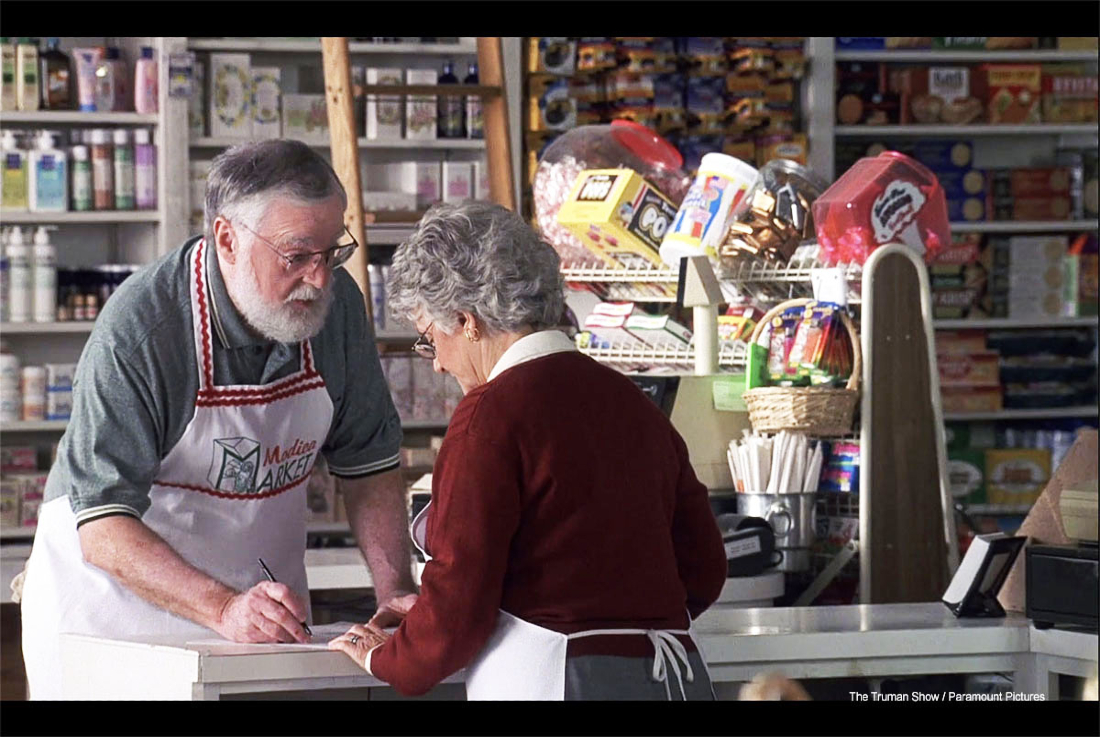 Mr. and Mrs. Modica in a sweet and memorable movie moment. 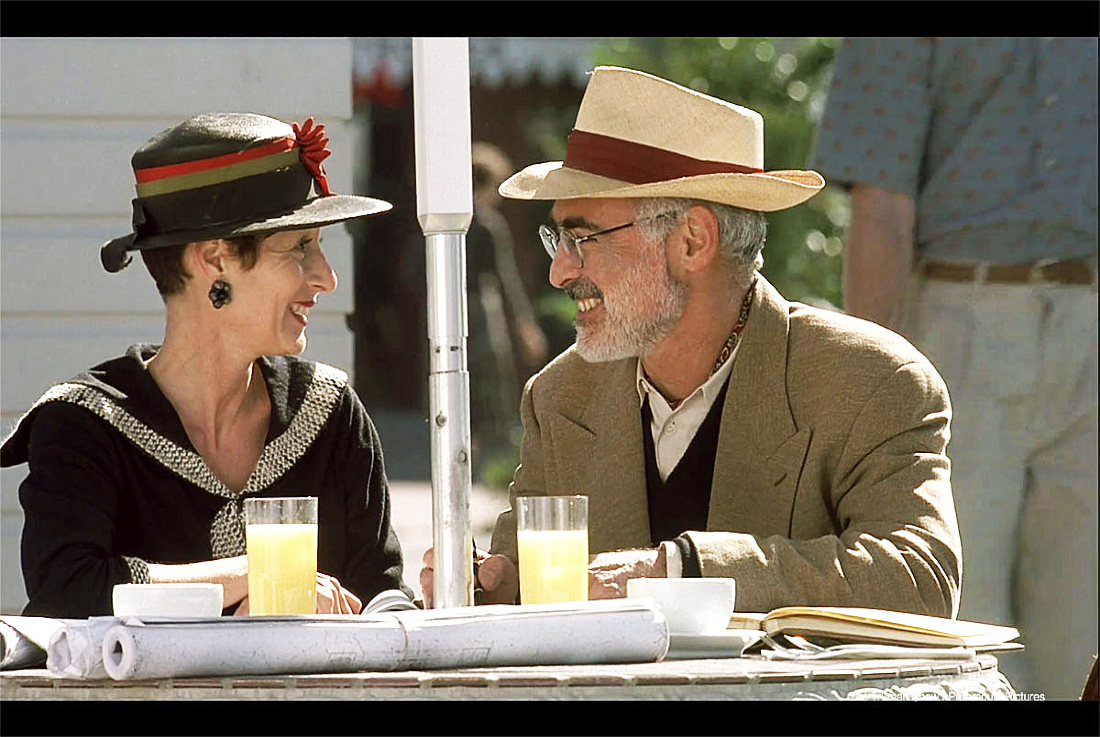 Seaside town founders Robert and Daryl Davis chat during a scene from the movie.

Susan Vallee is an award-winning journalist who has spent the past 20 years writing about the 30A area. She’s the author of the popular guidebook, “Meet Me on 30A,” a content creator, a published fiction writer and an editorial reader for the Peauxdunque Review, a literary magazine. She’s currently working on a few short fictional stories and a book proposal. You can follow her writing exploits on her occasionally-updated blog at susanvallee.com