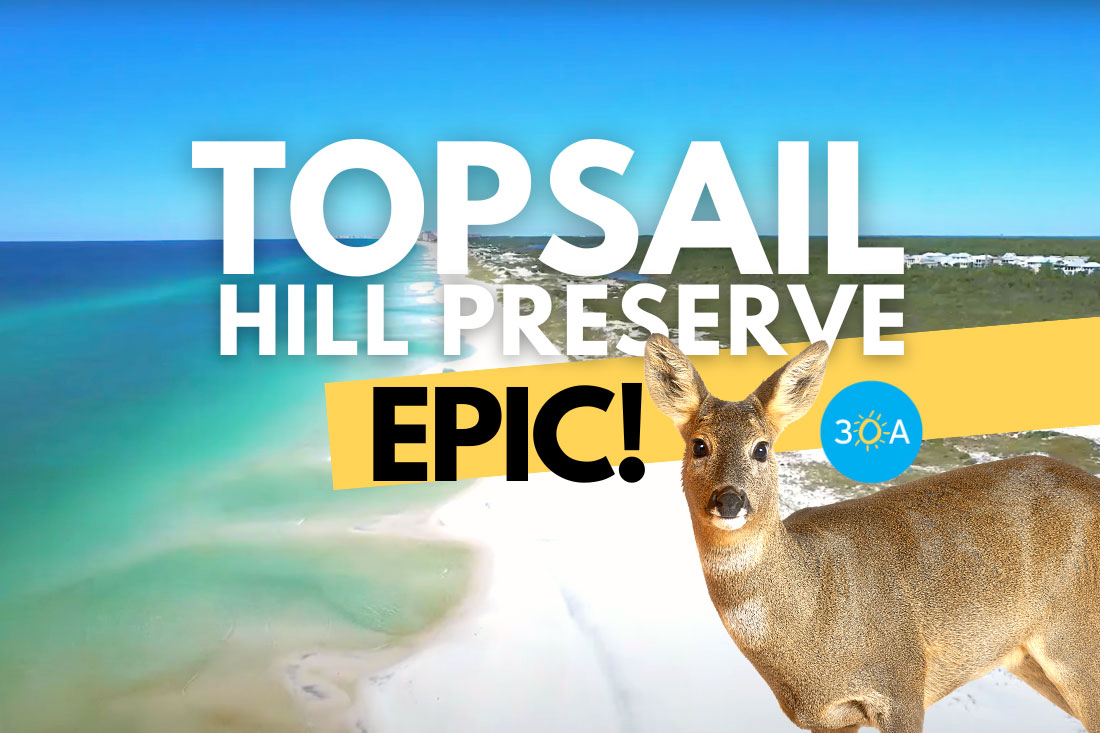 The majestic sand dunes here rise out of the Gulf of Mexico like the tall white sails of passing ships. The park’s namesake, Topsail Hill, towers some 25 feet above the emerald sea. Now that’s a sand castle. When the powerful Gulf winds blow, grains of sand are swept across the shore until they become trapped by the sea oats and other indigenous plants here. Over time, dunes form, as more and more sand piles up. Ever wonder what these wooden fences are for? They help the wind-swept sand build up to form new dunes.

But here in Topsail Hill Preserve, these dunes are the result of Mother Nature’s hard and persistent work over the millennia. Nice job, Mother Nature.

Of course, it’s no secret that the sugary beaches along Florida’s scenic Highway 30A (www.30A.com) are among the very best in the world. But among 30A’s beaches, the 3.2-mile long beach in Topsail Hill Preserve State Park must certainly be the best of the best as they’re virtually inaccessible except through the park. 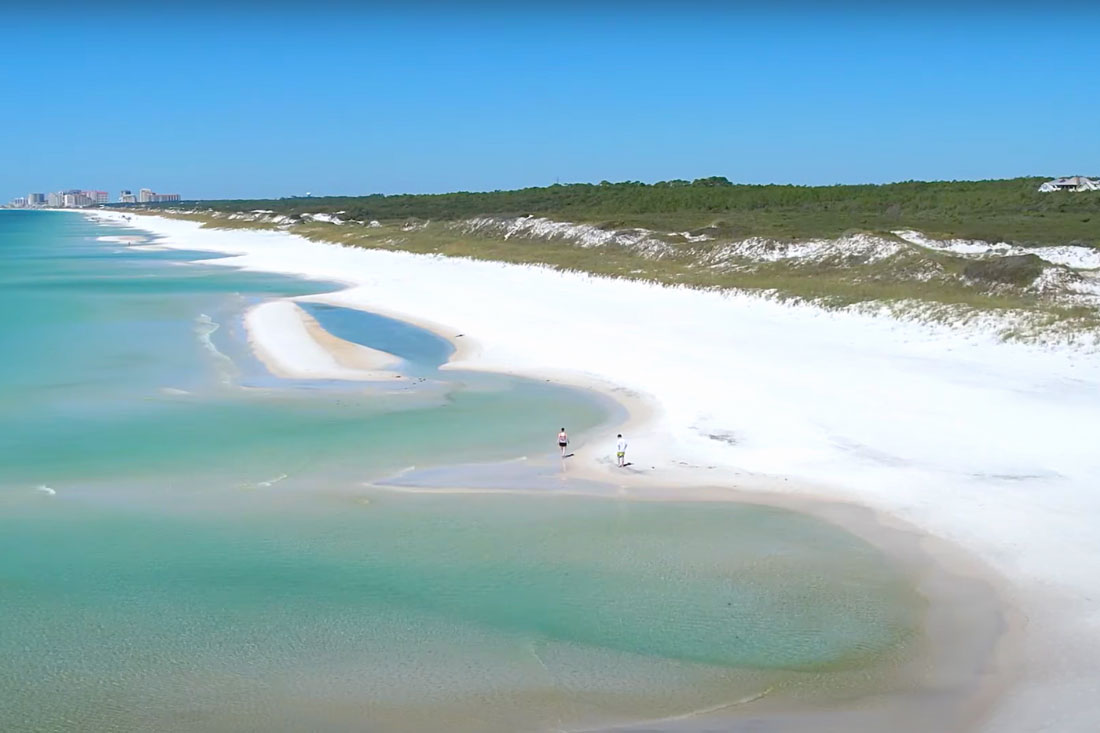 It’s truly extraordinary. If you love to snorkel, be sure to explore the Seahorse Reef just offshore with thriving marine habitats that have been carefully deployed into the shape of a seahorse. This 1,640-acre park is also home to two of 30A’s 15 rare Coastal Dune Lakes including Morris Lake, Campbell Lake, and No Name Lake.

What exactly is a coastal dune lake? Well, basically they’re freshwater lakes that sometimes fill up with so much rain that they actually burst through the neighboring sand dunes out into the Gulf of Mexico. And eventually, the Gulf reseals those sand dunes with her lapping tides. Coastal Dune Lakes can only be found in a handful of places around the world, but the coastal dune lakes at Topsail Hill Preserve are especially unique as they’re completely insulated from the overdeveloped outside world. This is why we have state and national parks. This is the reason you come. 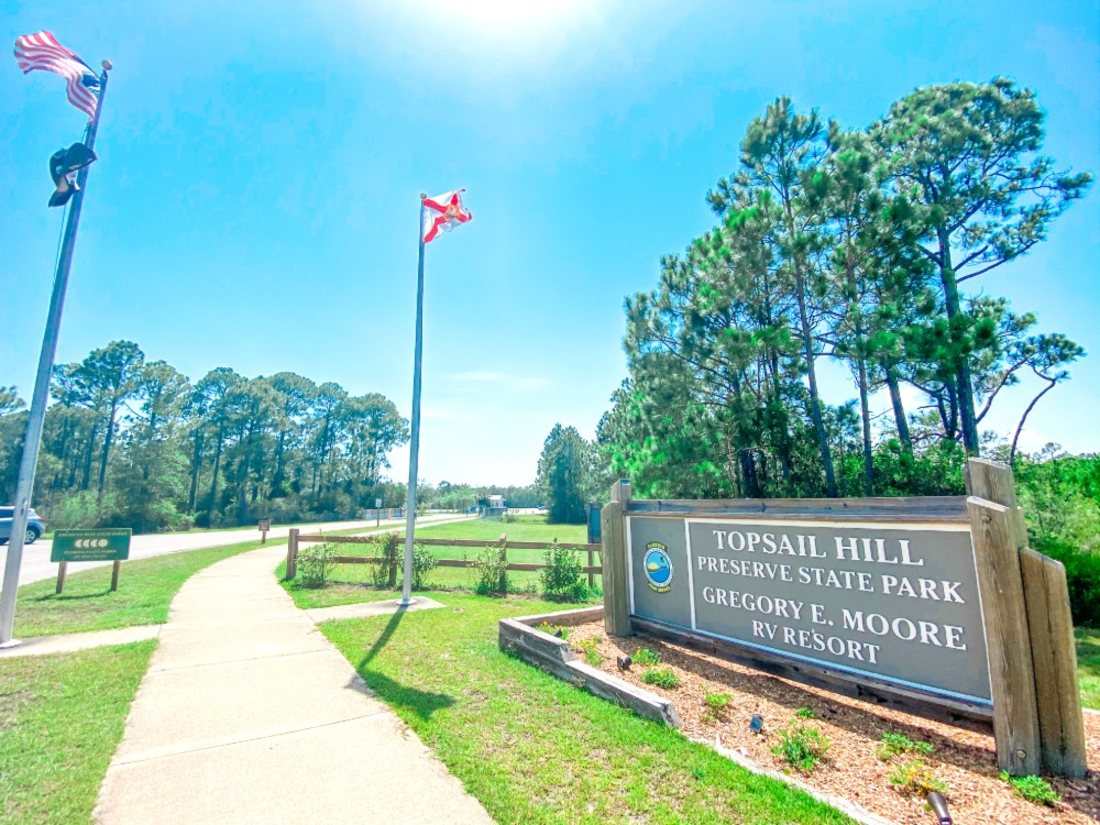 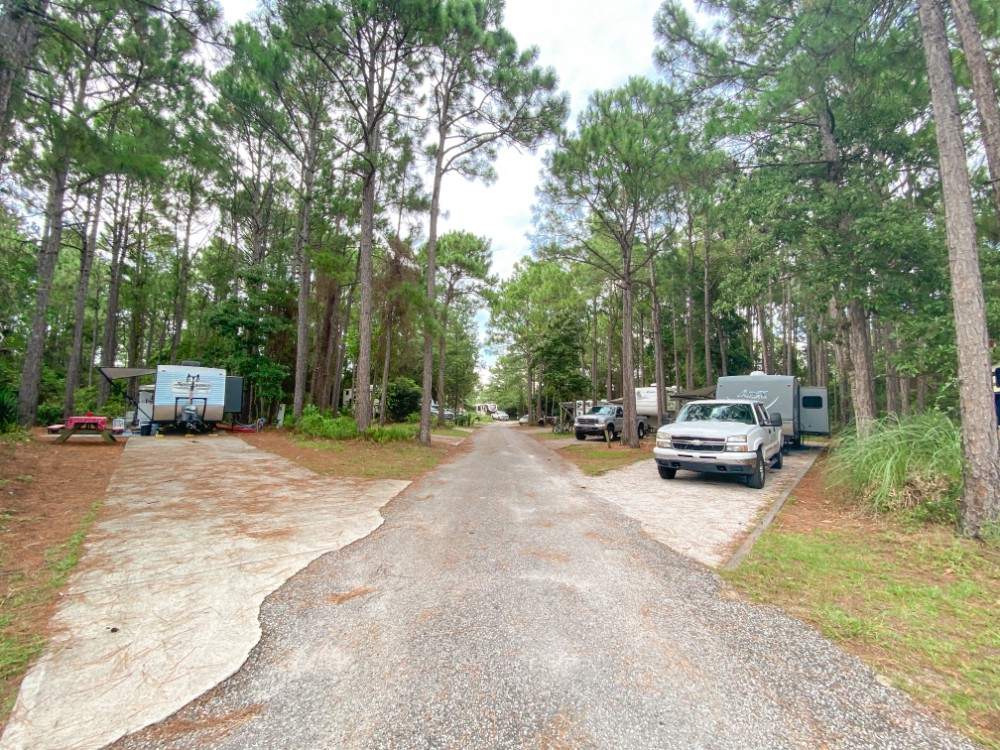 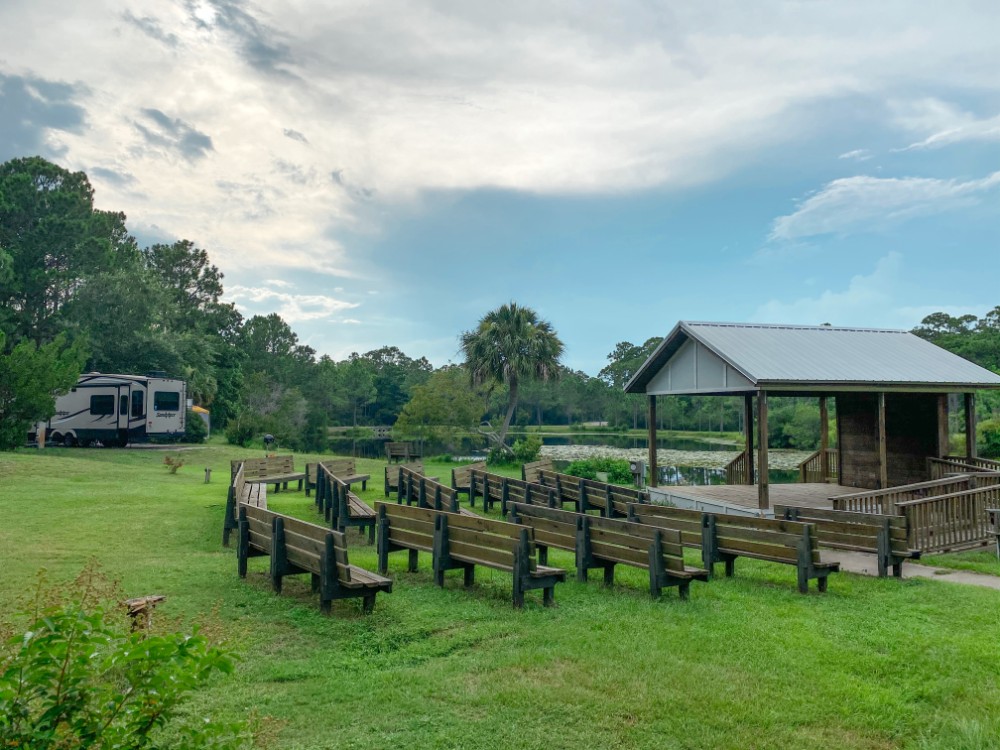 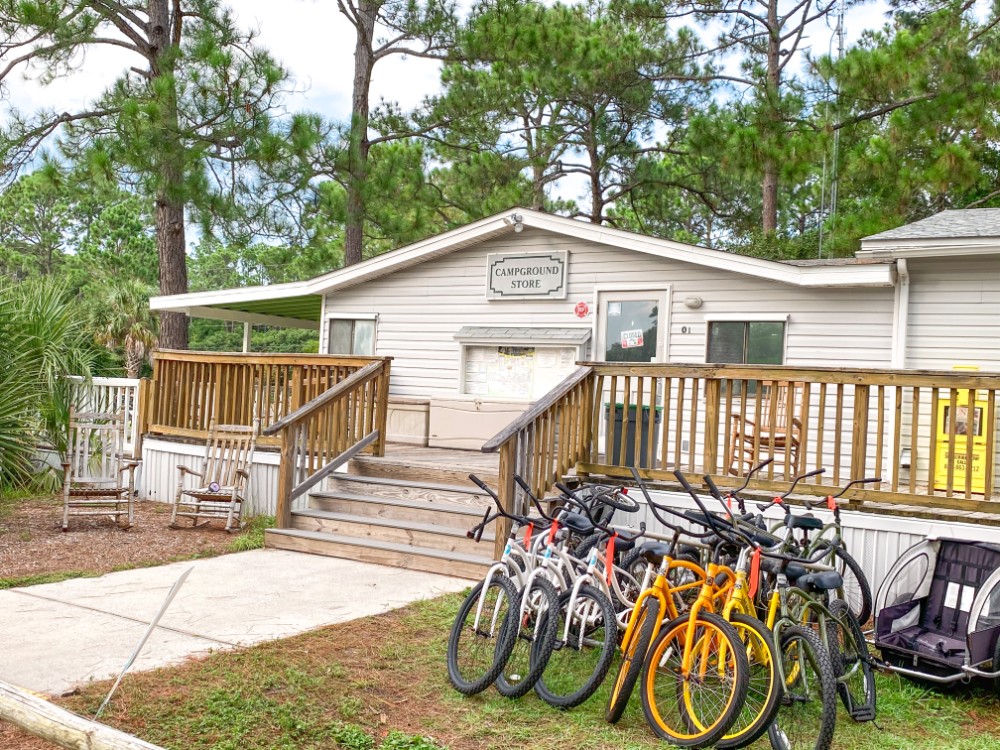 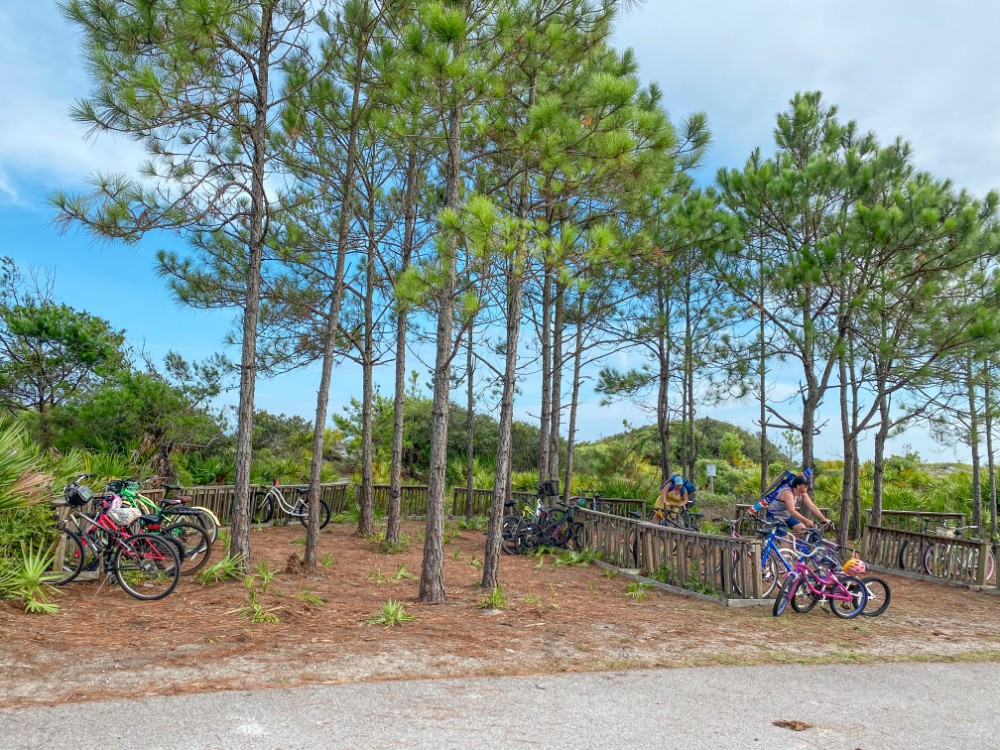 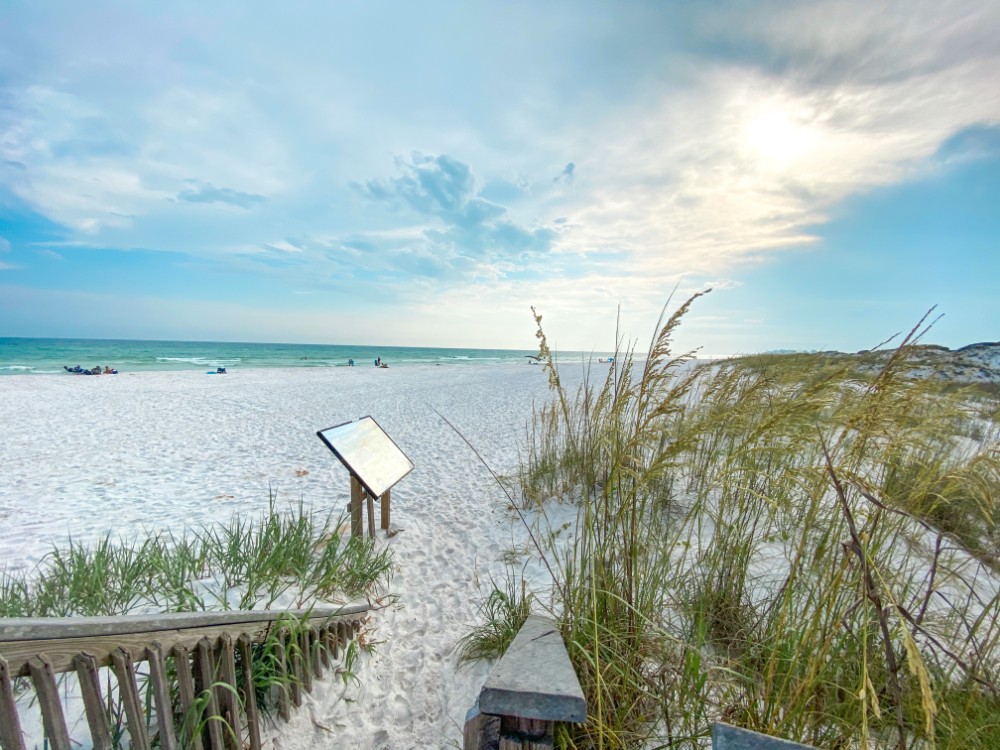 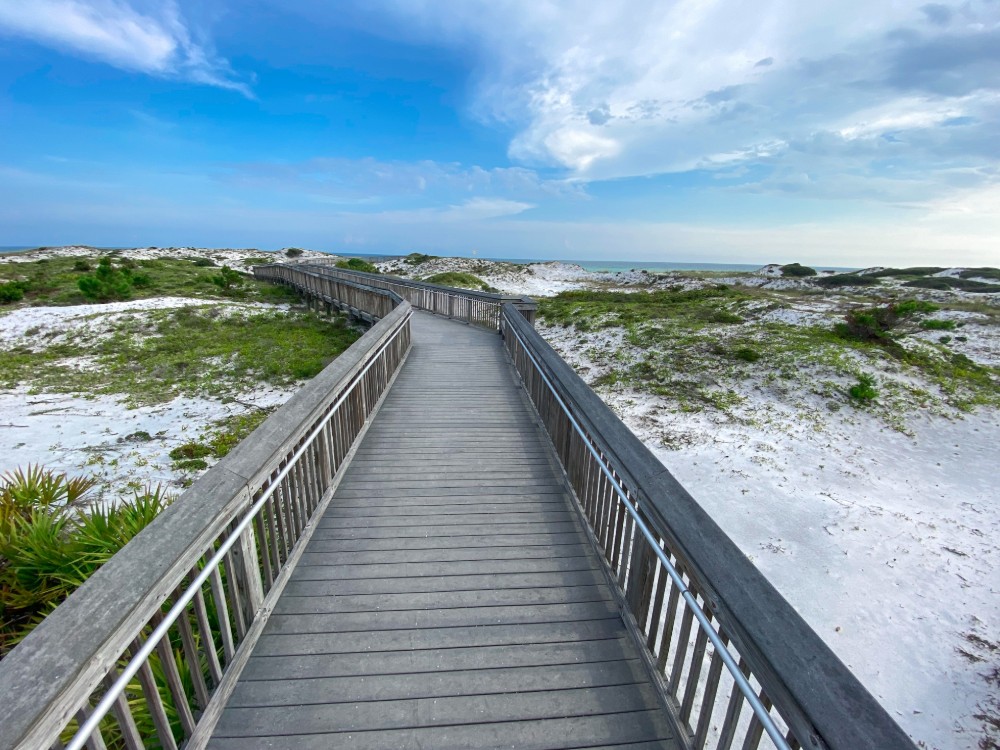 Topsail Hill Preserve is also home to one of the top-ranked RV parks in the nation. Topsail is home to 150 shaded RV sites, big rigs are welcome. There are also quaint cabins, tents, glamping sites, a swimming pool, and a stocked pond for fishing. There’s also Kith & Ken Cafe, a gourmet coffee shop where early risers get their caffeine and pastry fix. 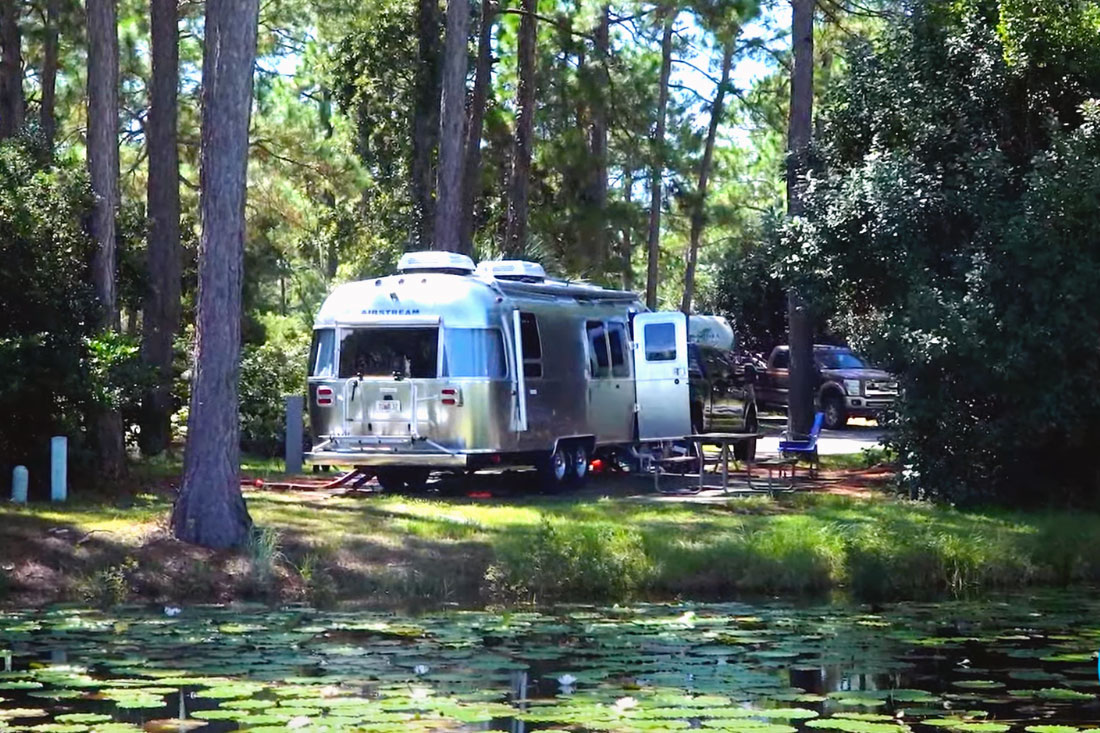 The wildlife here is abundant.

Every May to October, Loggerhead and Green Sea Turtles return to the same beach where they were born to build nests and lay their eggs. A revolving and miraculous circle of life.

Topsail Hill Preserve is also a fisherman’s dream with both the Gulf of Mexico and her numerous lakes on the daily menu. From the sand, lucky casters might reel in redfish, pompano, Spanish mackerel, and king mackerel, while the freshwater lakes serve up panfish, bass, and catfish. Bird watchers following the Great Florida Birding Trail also flock here to glimpse Topsail’s many avian residents, including red-shouldered hawks, osprey, bald eagles, red cardinals, Easter bluebirds, snowy plovers, and piping plovers who dart back and forth with the lapping tides. In addition to all of the birds, there are 13 imperiled species that take refuge here, such as the Choctawhatchee beach mouse, which works tirelessly through the night to spread seeds that ultimately help keep these dune systems intact.

Like to hike? You’re in the right place. There are 15 miles of tranquil trails here that meander through old-growth pine forests, wetlands, sandy scrublands, and of course the majestic dunes. If your knees aren’t what they used to be, the beach tram trail and Campbell Lake Bird Trail are paved making for a pleasant stroll or bike ride through longleaf pines. 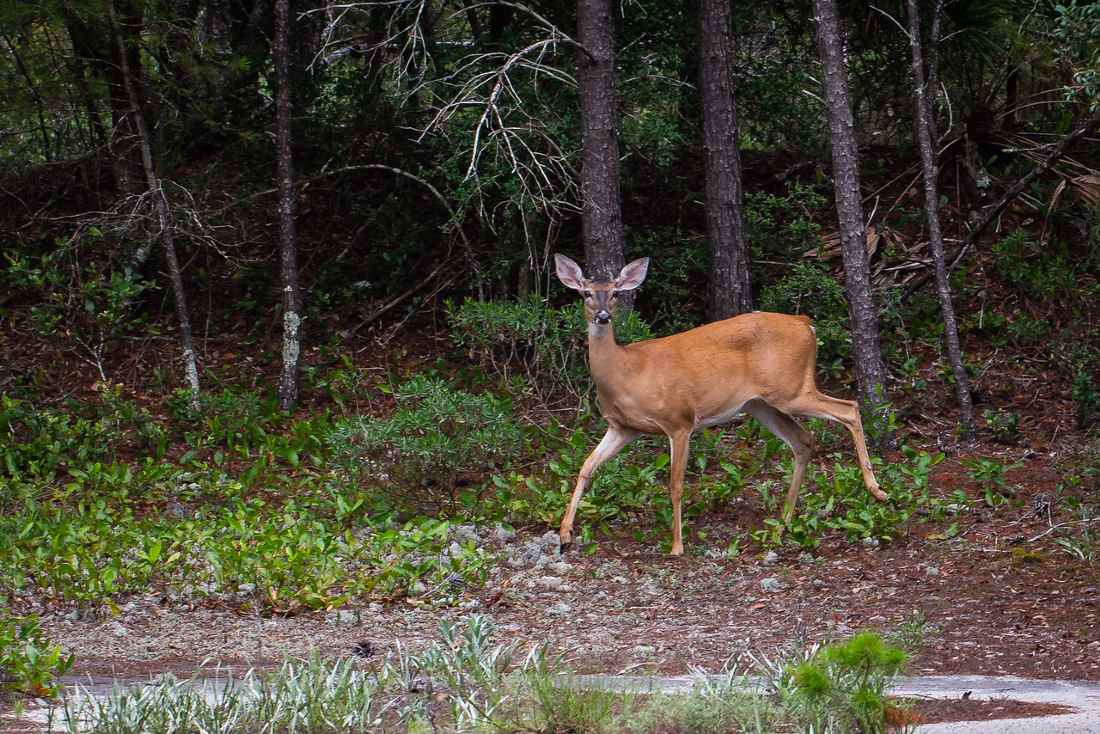 More adventurous trekkers can take the deer track trail to soak in epic views of the 100-acre Campbell Lake where you’ll discover water lilies, bald cypress trees, and alien-looking pitcher plants. (Did we mention they are carnivorous? Hey, nobody said this trek was going to be without its pitfalls and perils.)

The No Name Lake Trail will lead you to the edge of one of 30A’s smallest lakes. This isn’t a Coastal Dune Lake as it doesn’t breach into the Gulf, but it’s still a wonderful spot to sample the real Florida. The Turpentine Trail is named after the prized resin that was once squeezed from these trees. And if you’re vigilant, you might even see what they call catface pines, named after the distinctive cuts once made by turpentine harvesters who toiled here in these woods more than 100 years ago.

On the far west end of the park, the deep-sand Morris Lake Trail that weaves through ancient dunes and scrub communities can be a bit more challenging but the prize for your efforts is the magnificent solitude of Morris Lake. History buffs will also love the remnants of a World War II missile testing program including an old track that was used for moving missiles and other military vehicles across this soft sand.

Hey, let’s admit it, most state parks have nature trails, right? They’ve got birds and assorted critters. That’s kind of why they’re state parks. And many state parks offer camping. A few might even offer a swimming pool or a really hip coffee shop. But only a precious handful have three miles of private undeveloped beach. And we haven’t researched it, but we’re fairly certain that only one has an artificial reef shaped like a seahorse for snorkeling.\

Welcome to Topsail Hill Preserve State Park. This is the real Florida. 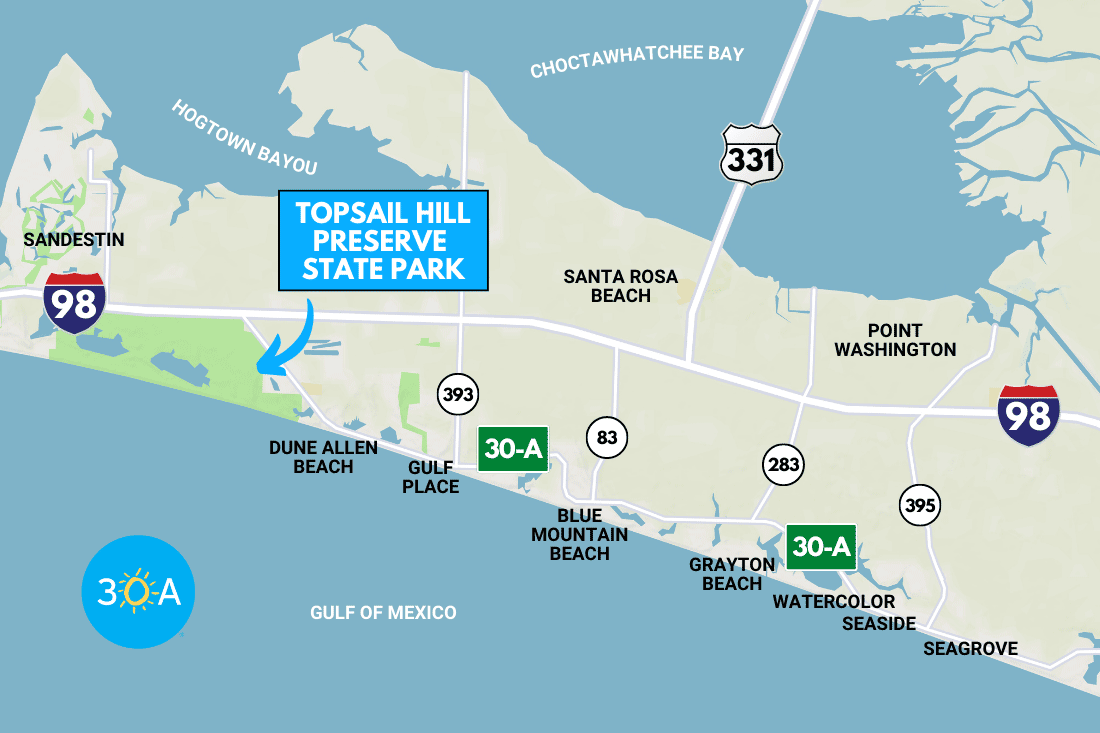