A Deep Dive into the United States’ First Underwater Museum - 30A 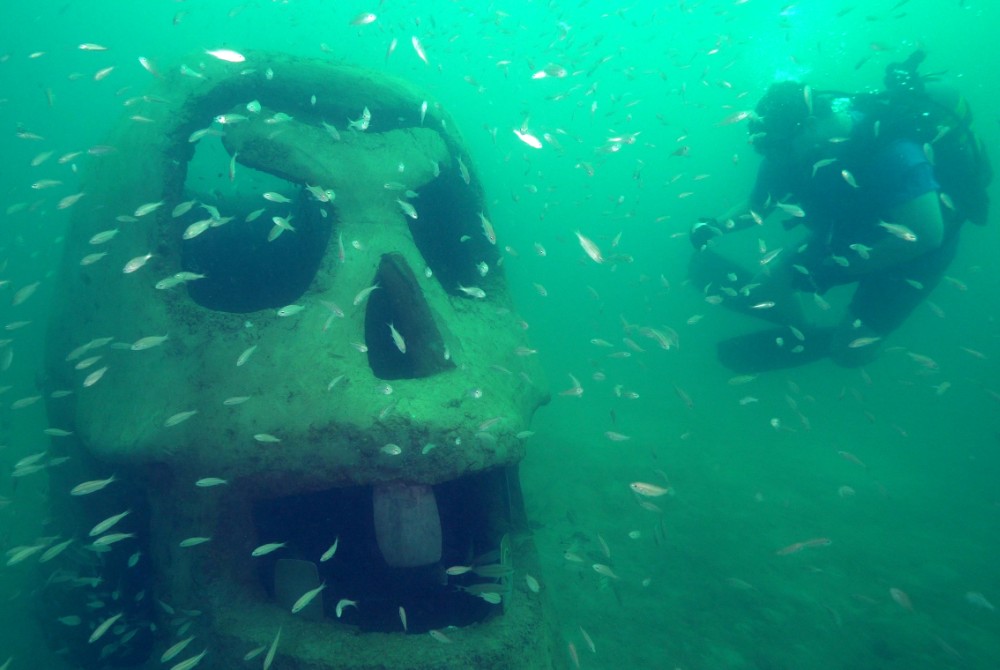 In the Gulf of Mexico, just off the coast of Walton County, Florida, lies a collection of sculptures 58 feet beneath the surface, known as the Underwater Museum of Art (UMA). A partnership between the Cultural Arts Alliance of Walton County (CAA) and the South Walton Artificial Reef Association (SWARA), with support from Visit South Walton, the National Endowment for the Arts, the Alys Foundation and Visit Florida, UMA is the United States’ first underwater museum.

In addition to offering artistic and cultural value, the sculptures “made of concrete, steel, iron, and other materials that will last for years” are designed to foster the development of marine habitats and expand fishery populations.

At the beginning of this year, the CAA and SWARA announced the jury-selected 2020 class of sculptures, which will make up the third installment. “The submissions this year were fantastic,” Andy McAlexander, vice president of SWARA, told Beach Happy. “The artists really took into consideration not only the sculpture that they had in mind but its ability to serve a dual purpose as an artificial reef.” During the CAA’s annual Under The Sea fundraiser that will be held later this year, people will have the opportunity to see the sculptures on land before they’re deployed into the Gulf of Mexico and chat with the artists that created them. After that, you’ll need to be a scuba diver or freediver to see the sculptures in person.

The young museum, which made TIME magazine’s World’s Greatest Places list in 2018, was just a proposal of an idea in 2017 by Allison Wickey, board president of the CAA, who was a new board member at the time. Wickey came up with the idea after learning about an underwater sculptor who was deploying pieces in other countries and having witnessed the deployment of artificial reefs locally. “I was mesmerized by the idea of observing art underwater,” said Wickey, who set up a meeting with McAlexander to discuss the possibilities of such a project. “At the time SWARA was deploying limestone towers and pyramids in permitted areas along the Emerald Coast and I asked if it was possible to deploy sculptures.”

A week later, Wickey presented the concept for UMA and a partnership with SWARA at a CAA board meeting. Wickey recounted that she was nervous and felt her idea was “totally pie in the sky” and, after sharing her proposal with CAA executive director Jennifer Steele and the board, was immediately met with excitement. The CAA worked with SWARA to make her vision a reality. “Every single step of the project involved something new to figure out that none of us had ever experienced and the CAA and SWARA leaned heavily on each other through it all,” Wickey said. The first call for artists submissions was out within the year.

Rachel Herring, a Florida-based multimedia artist and graphic designer, was one such artist who answered the call. Her sculpture, The Grayt Pineapple, was one of seven designs chosen for the inaugural deployment of UMA. “When I set out to apply, I knew I wanted my piece to be fun and whimsical,” Herring told *Beach Happy*. “I also knew I wanted it to be hollow so it could house and protect fish. When the pineapple idea came to me, I knew it was perfect since they are symbols of welcoming and friendship. And of course, an 8-foot pineapple fits into the category of fun and whimsical.” 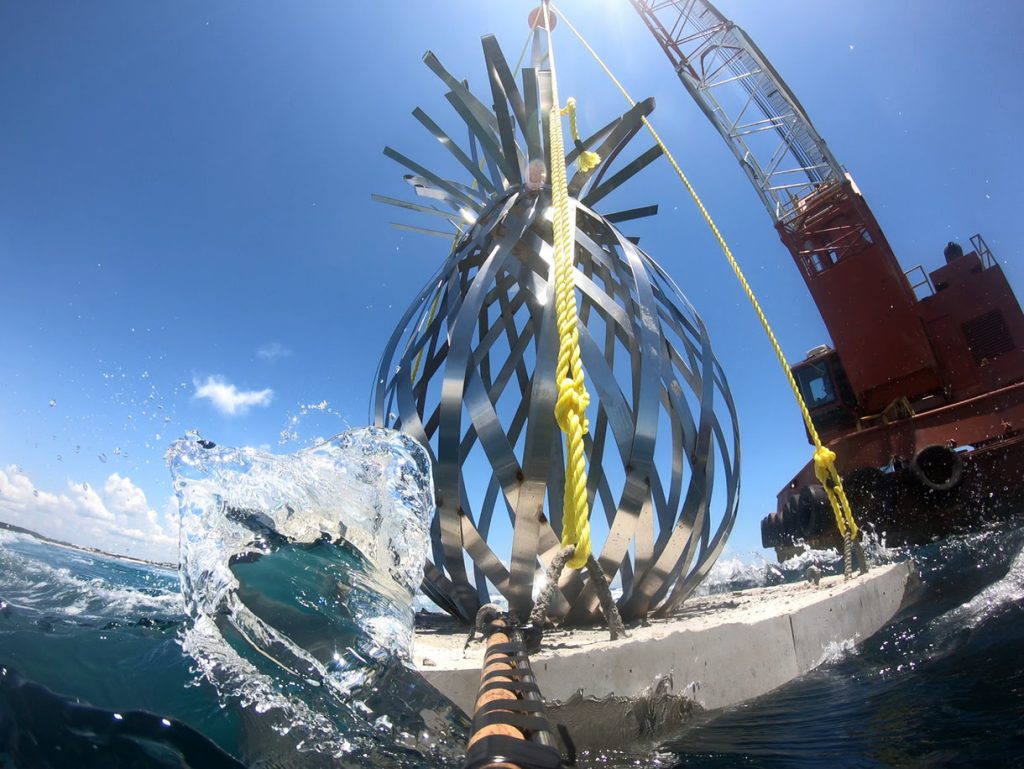 After her design was selected, Herring enlisted the help of her dad–who conveniently owns a metal fabricating shop and had a supply of stainless steel at his disposal–to turn her sketch into a full-blown sculpture. “I started making paper models to scale so we would know what cuts to make,” Herring explained. “Luckily the calculations were pretty spot on, and we welded it together fairly quickly. The most rewarding part was being able to create The Grayt Pineapple with my dad. His hobby is building old hot rods, and he loves to say ‘more people have asked me about that dang pineapple than anything else I’ve done.’”

Herring got scuba certified soon after the sculptures were deployed in the summer of 2018.

“It is so rewarding to see them doing their job growing coral and housing wildlife!” she said.

Wickey also conceptualized a sculpture for submission that inaugural year, and her piece was also chosen. She found inspiration in an anamorphous sculpture at a Chicago airport. “It was a huge piece mounted on the ceiling and consisted of hundreds of birds suspended by threads, floating in a murmuration,” Wickey said. “As the viewer descended the escalator, the shape changed and undulated and I knew then I wanted my sculpture to be about perspective.” 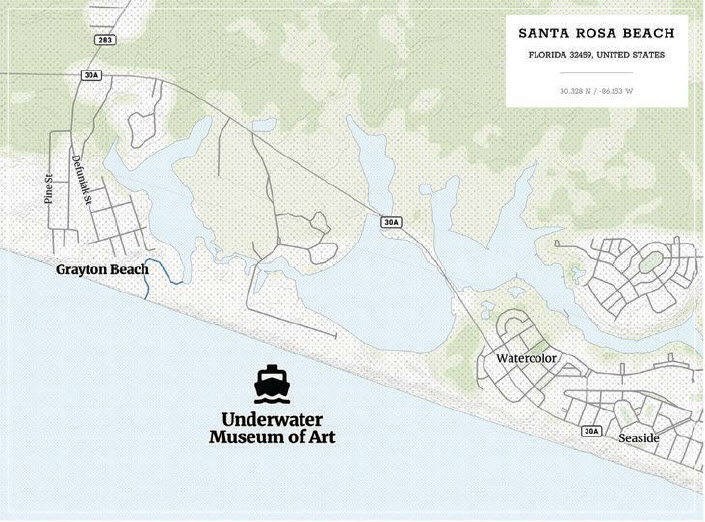 She ultimately decided to create a multidimensional octopus. “An octopus is a multitasker and is equipped to handle any situation it experiences, always finding a way out or around predicaments,” Wickey said. “I’m a painter and my style is known for its layered and textured look, which also shows through in the sculpture—any way you view the piece reveals a new layer and dimension. I love a challenge and problem solving so the image is very symbolic of my personal vibe.”

Once her piece was selected, Wickey got to work on the technical logistics of actually creating her sculpture, Anamorphous Octopus. She was able to bring her concept to life with the help of a graphic designer and metal workers from Montgomery, Alabama. “I could not have been more impressed by the teamwork and finished project,” Wickey said. “While I came up with the concept, they did the work to make it come alive through software, cutting and welding.”

For Wickey, the experience of watching the welders assemble her sculpture was second only to watching the first deployment of UMA. “I remember that perfect late June day in the Gulf right off Grayton Beach, looking out at the sculptures on the deployment barge and at all of the boats and yachts holding the sculptors, our UMA team and so many supporters, and being in total amazement that it was even happening,” she said. “Watching the pieces deploy and hearing the cheers is something I will treasure as one of the very best moments of my life.”

Here are a few of the many exhibits you might just see under the sea: 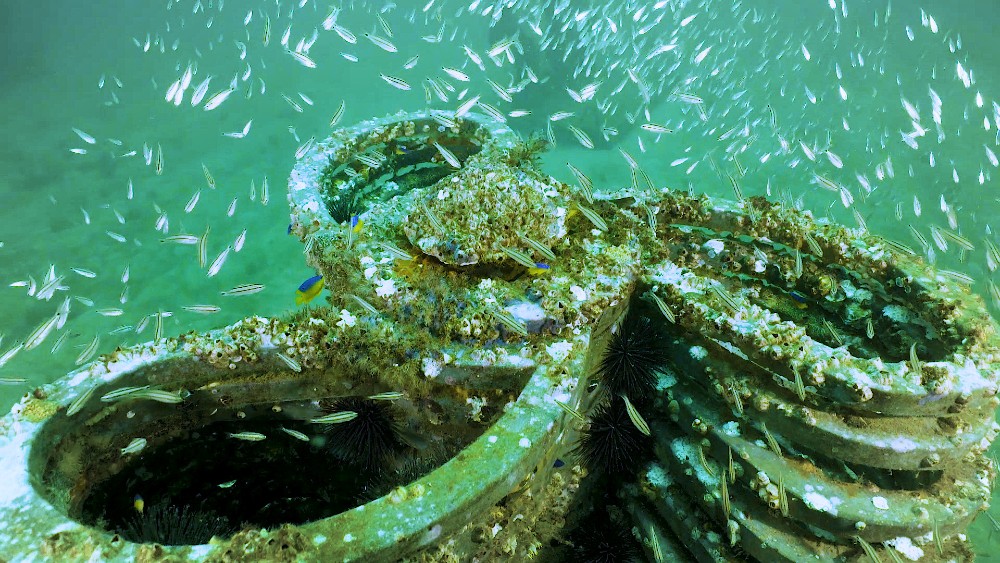 1. Anamorphous Octopus by Allison Wickey:** Divers swimming around this sculpture will see different things depending on their vantage point, with the full picture revealing itself when viewed head-on. 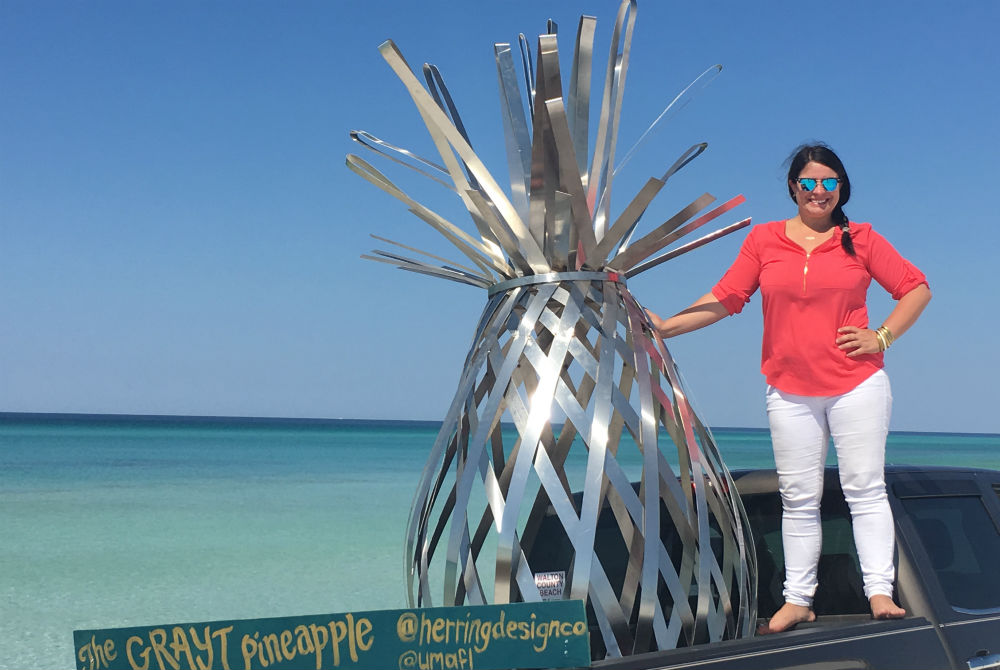 Artist Rachel Herring with her UMA sculpture, The Grayt Pineapple.

2. The Grayt Pineapple by Rachel Herring:** This 8-foot tall stainless steel structure in the shape of a pineapple, a symbol of hospitality, welcomes small fish into its hollow body. 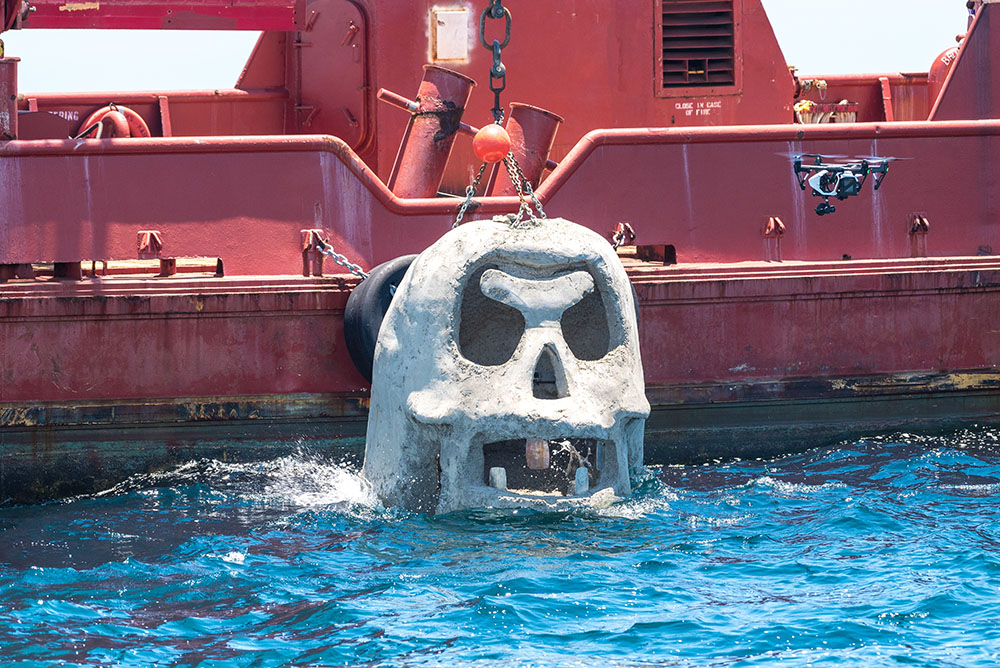 3. SWARA Skull by Vince Tatum:** Look closely at the eye sockets of this skull, which stands 8-foot tall, and you’ll see that they resemble the shape of southern stingrays. 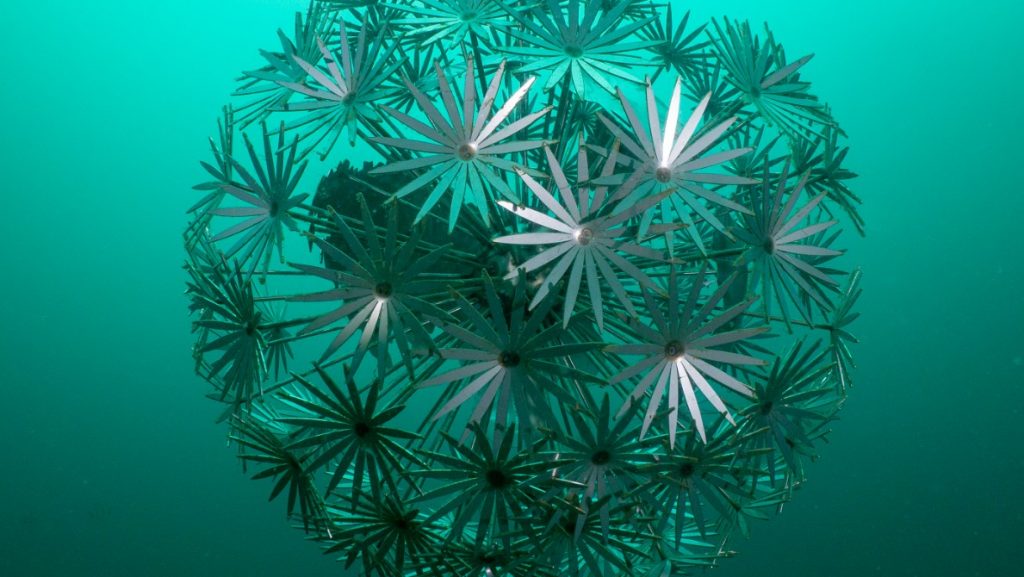 4. Let’s Not Blow This by Kevin Reilly:** This piece is a call to action for all of us to do our part to restore and protect the earth, represented as a fragile dandelion. 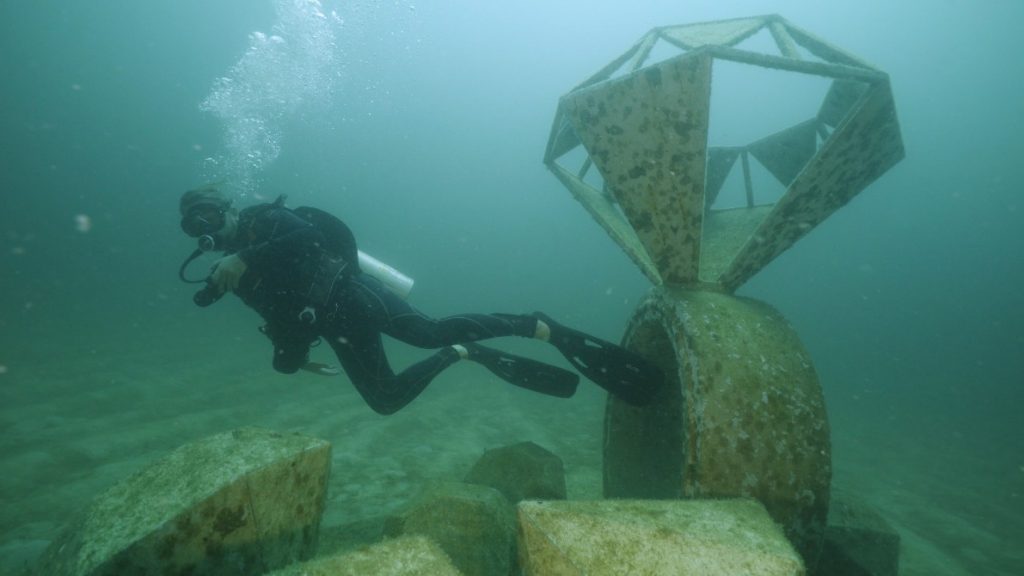 5. I Found It! by Ingram Ober and Marisol Rendon:** Massive loose jewels flank an even larger diamond ring on this sculpture inspired by lost pirate treasure.

New sculptures will be deployed every year. Here’s a look at what’s coming soon:** 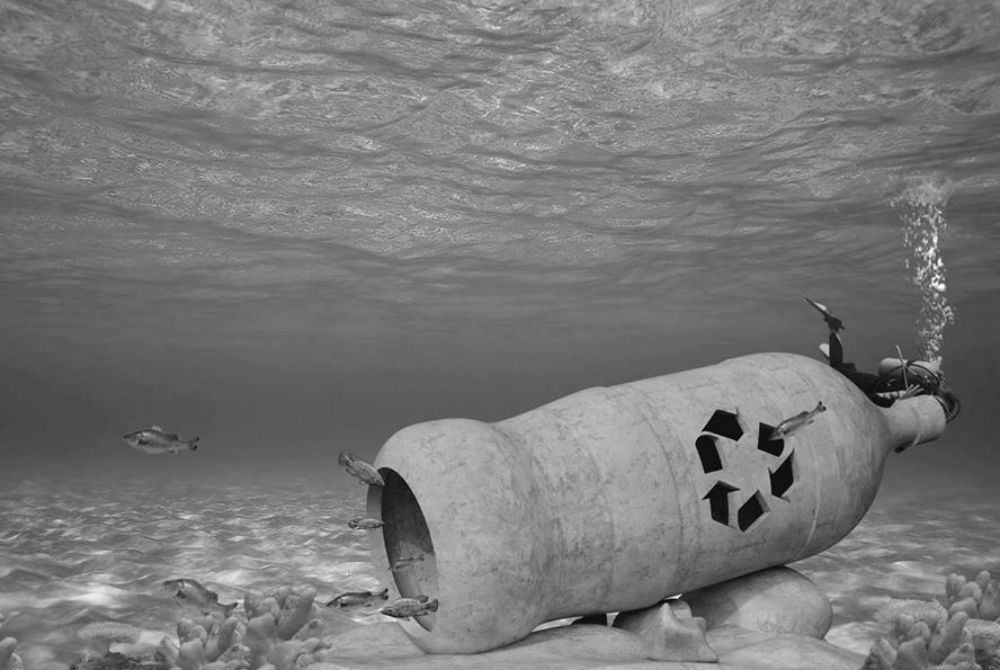 El Plastico by George Sabra. The sculpture has been sponsored by The 30A Company.

1. El Plastico by George Sabra:** This massive plastic bottle constructed of environmentally cast concrete, a representation of something that’s harmful to marine life, is playing a direct role in helping it flourish.

2. Three Wishes by Ingram Ober and Marisol Rendón:** Small ports located low on the belly of this giant geometric genie lamp are designed for divers to purge air from their octopus regulators. The air enters the lamp and is released out of the spout, like a wish-granting genie would. 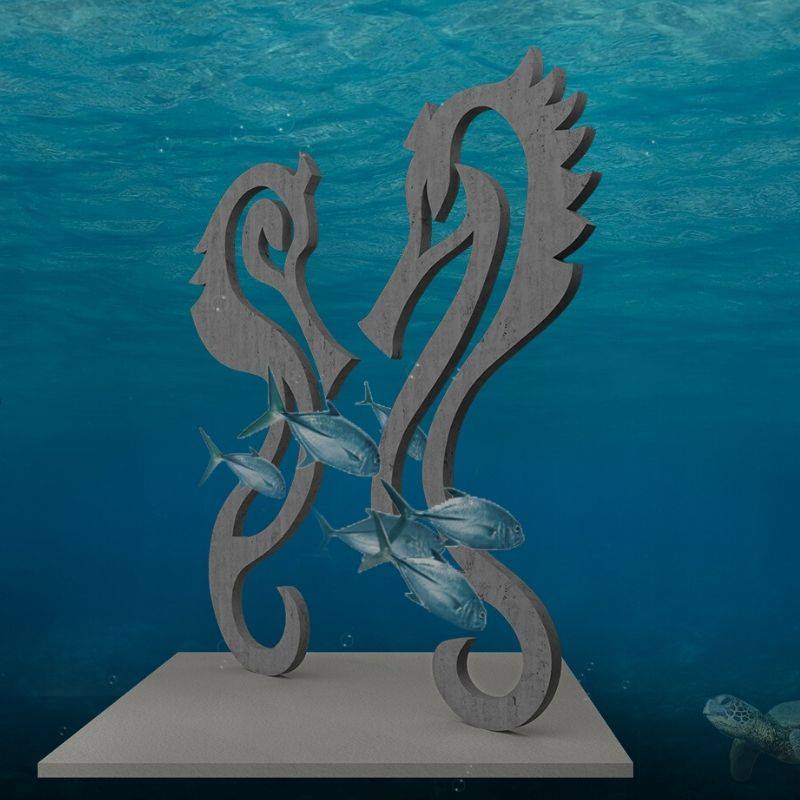 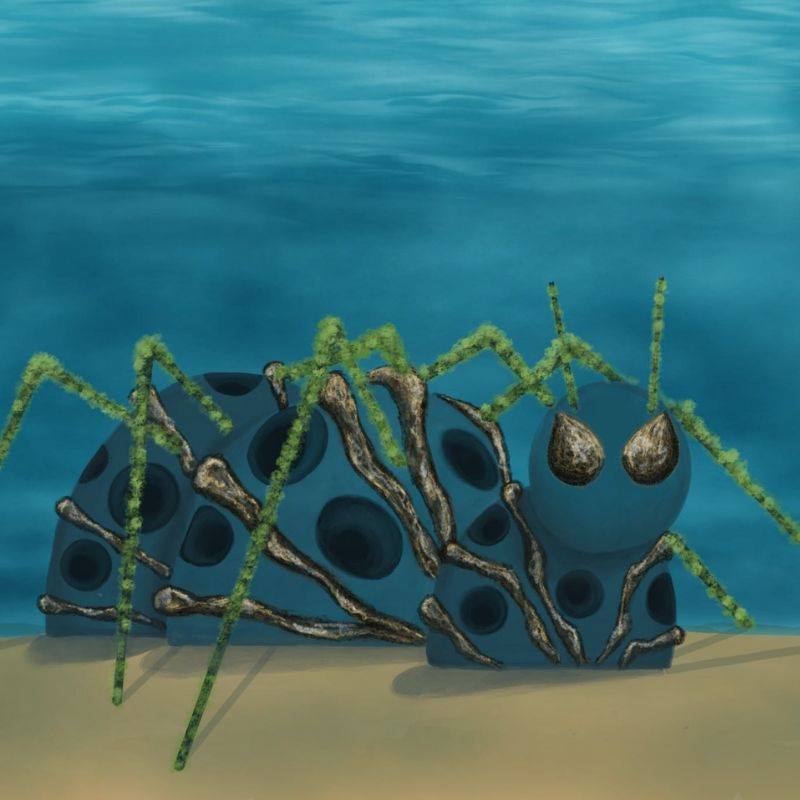 4. Eco-Bug by Priscilla D’Brito:** The many limbs and segmented body of this magnified insect sculpture offers ample surfaces to foster marine life and coral growth. 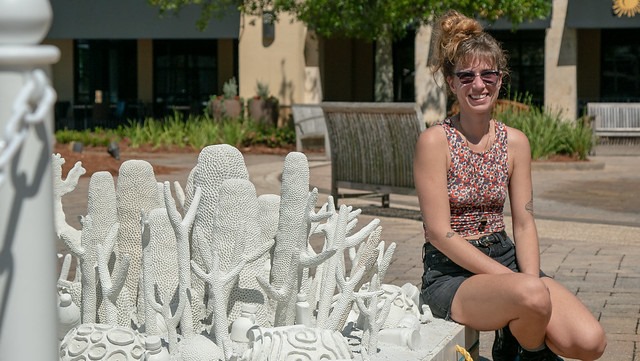 ‘To Replenish With Water’ by Beatriz Chachamovits

This sculpture by Beatriz Chachamovits mimics bleached coral, a condition affecting once healthy corals stressed by rising ocean temperatures and pollution. It is now a flourishing marine habitat.

To learn more about the Underwater Museum of Art (UMA), check out www.umafl.org.

Abigail Abesamis is a writer, editor and former New Yorker based in sunny Panama City Beach, Florida. Her writing has been featured in HuffPost Food & Drink, Forbes.com, Insider, Business Insider, Apartment Therapy and more. When she’s not writing she’s reading up on the latest wellness trends, teaching Zumba classes, or reading a book on the beach.