From War to Wonder: The USS Oriskany Provides Life After Death - 30A 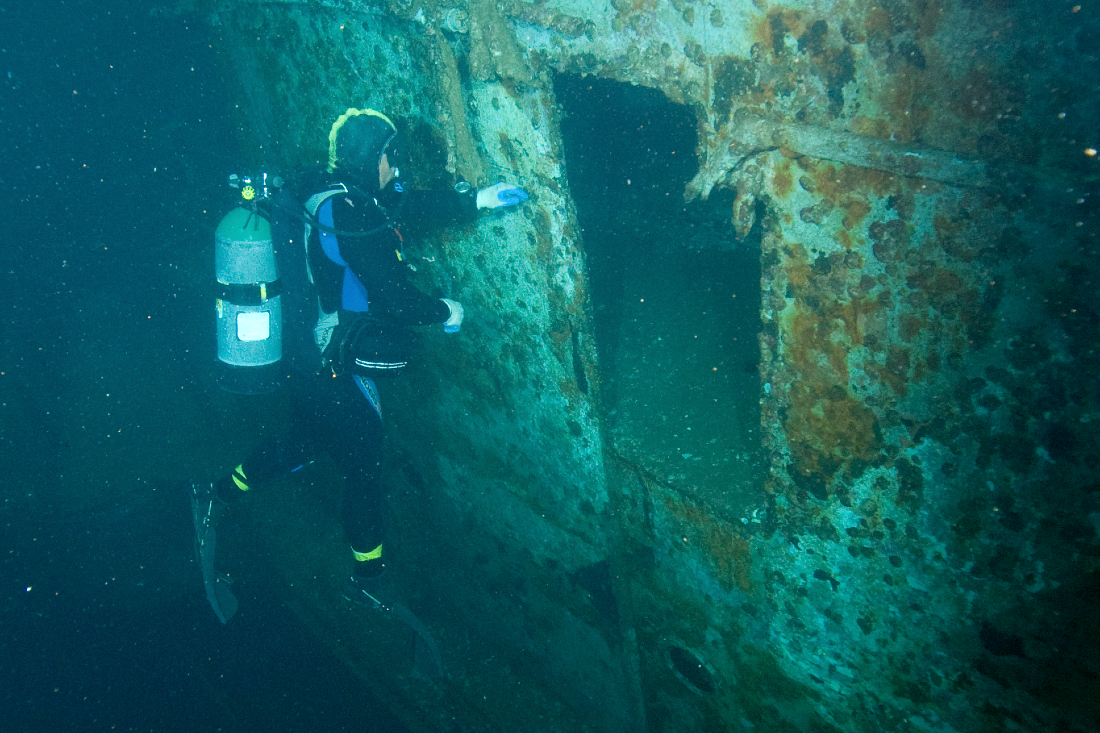 I will never forget the first time I descended on a big shipwreck as an advanced Public Safety Diver. I remember thinking this must be what it feels like to be in space. I can say first hand it feels otherworldly to be over 130 feet down beneath the surface of the sea. If you’re lucky, you will have a clear view of things you would never encounter topside. Prepare to be greeted and inspected by the environment’s diverse inhabitants as they swim up and stare at you before shooting away as if to say, “Welcome! Follow me!”

When ships are sunk, intentionally or not, they become bastions of the ocean’s depths, starting their new careers as artificial reefs.

If you travel by boat roughly twenty-six miles southeast of the Pensacola Pass off the coast of Florida, you’ll find yourself hovering above the world’s largest artificial reef. Beneath a lonely spot marked by a colorful buoy lies the USS Navy Aircraft Carrier Oriskany—and she is formidable. 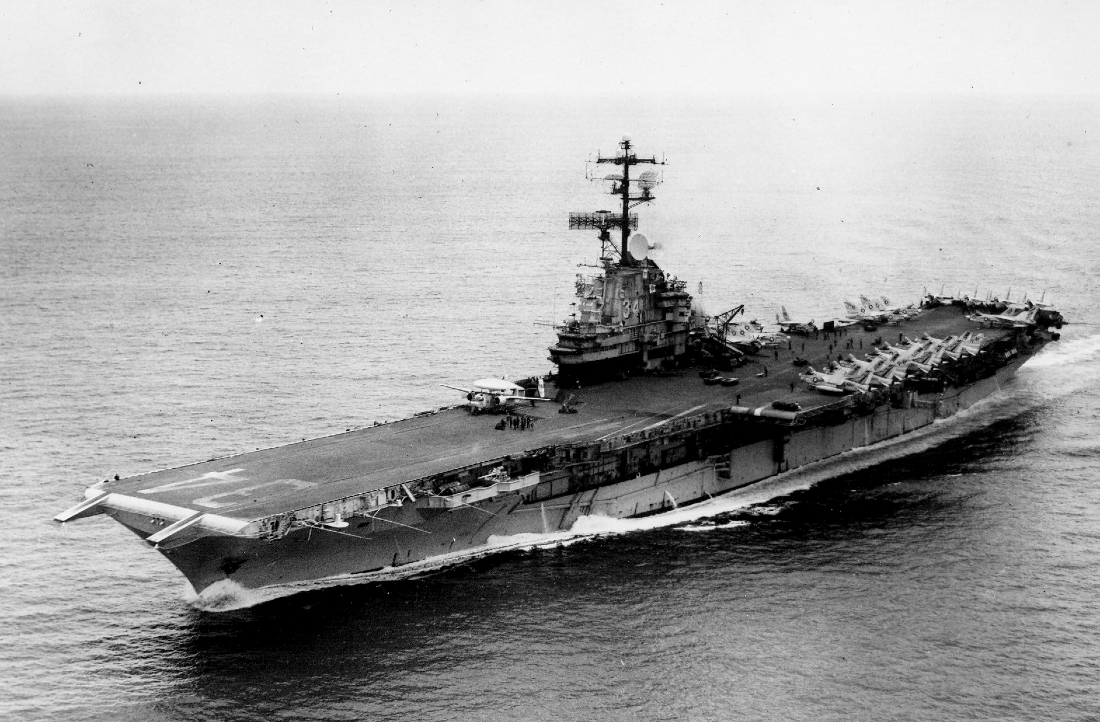 In her life above the surface, Oriskany earned the nickname “Mighty-O.” She was officially laid down at the New York Naval Shipyard in 1944. At the time of construction completion, the Essex-class carrier weighed 30,800 tons and was 911 feet long. The vessel, named for the 1777 Battle of Oriskany during the American Revolution, was launched on October 13, 1945. She completed twenty five years of service, and was decommissioned in 1976. The carrier was reclaimed by the Navy in 1997 after being sold for scrap in 1995, and it was decided she would be sunk in honor of the men who served aboard her. Extensive preparations for sinking the ship included removal of any materials which might be toxic to the underwater environment, and stripping off insulation and wiring, which could pose entrapment threats to rovers and divers.

It took three years and roughly twenty million dollars to prepare the giant carrier for sinking.

With a total of seven battle stars earned for service in Korea and Vietnam, the Oriskany went from a US decorated warship to an underwater wonder when she was sunk in May 2006. 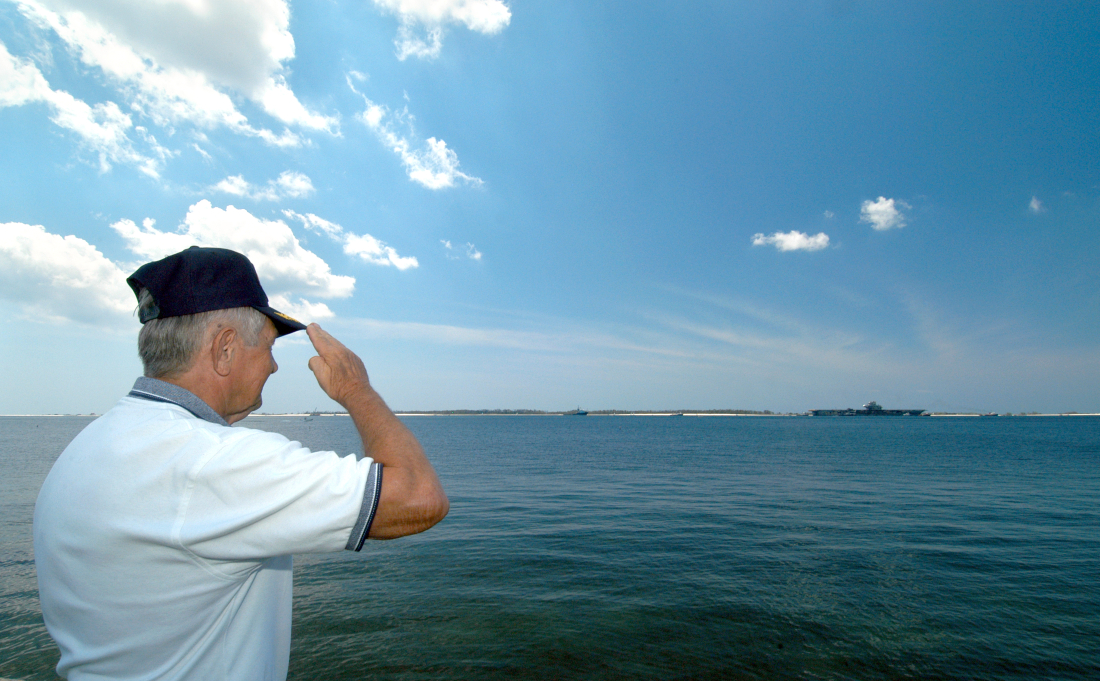 The Oriskany took thirty-six minutes to sink to her current resting depth of 212 feet. The flight deck is at 146 feet, and the stack, also known as “the island,” sits at 84 feet below the surface. These measurements can fluctuate due to weather systems, strong currents, and bottom surges. The main deck is over three football fields long.

At least forty documented species of fish and marine life now call it home. Thriving on and visiting the wreck are small tropical fish, large game fish, pelagic fish, rays, and various sharks such as hammerheads, bull sharks, and whale sharks. It has been affectionately named “The Great Carrier Reef.”

But because of its location, depth, and size, this wreck is reserved for advanced divers only, and thus earned a third nickname, “The Big Risk.” It is not for the faint of heart, and many divers consider it a bucket list dive. There are dive outfits up and down the Northwest Florida coast that will take you to the Oriskany Wreck, but you will need very specific credentials to dive her. Most dive services will have those listed on their websites, but know that you should inquire ahead regarding individual requirements should you decide to brave this beautiful wreck. 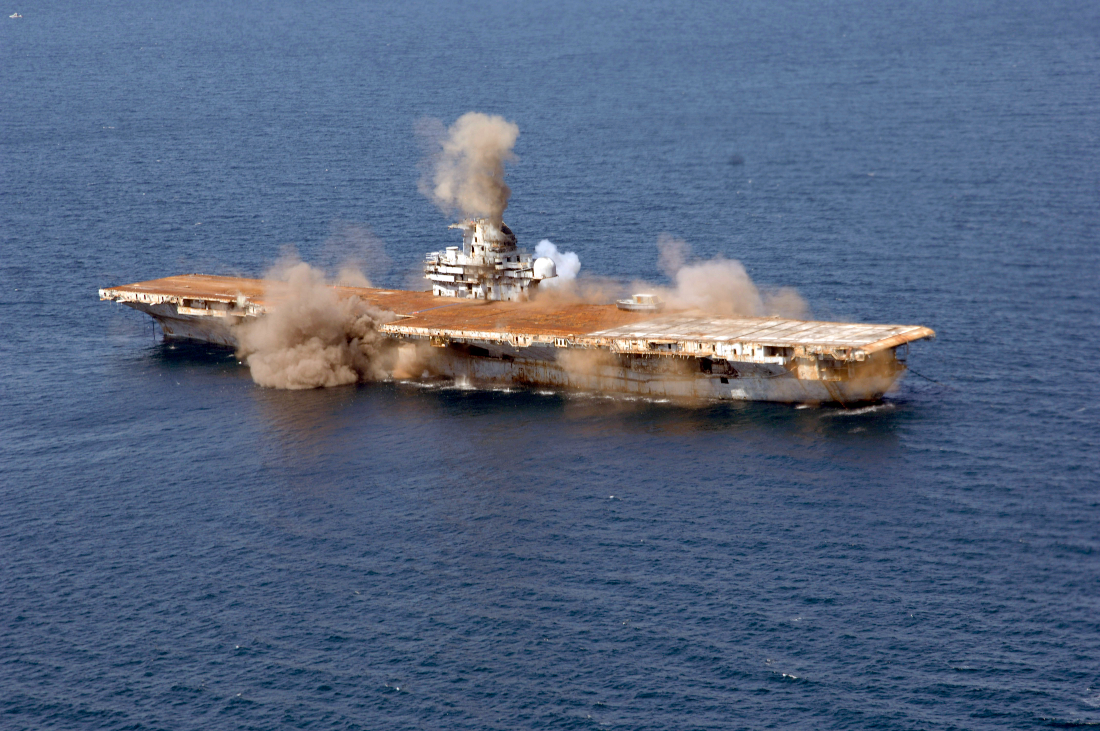 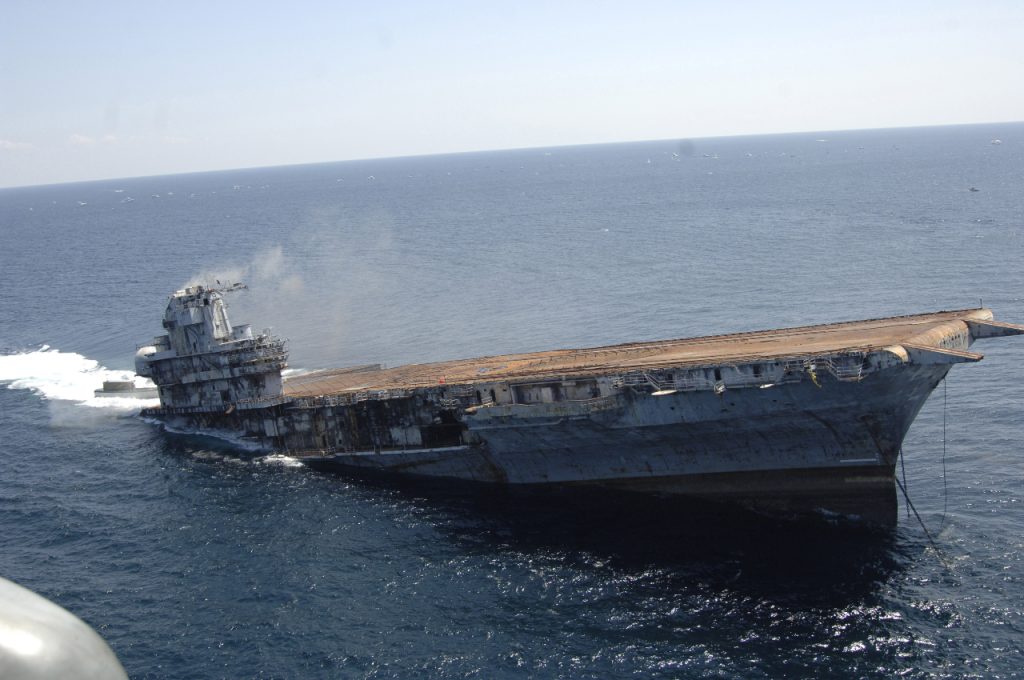 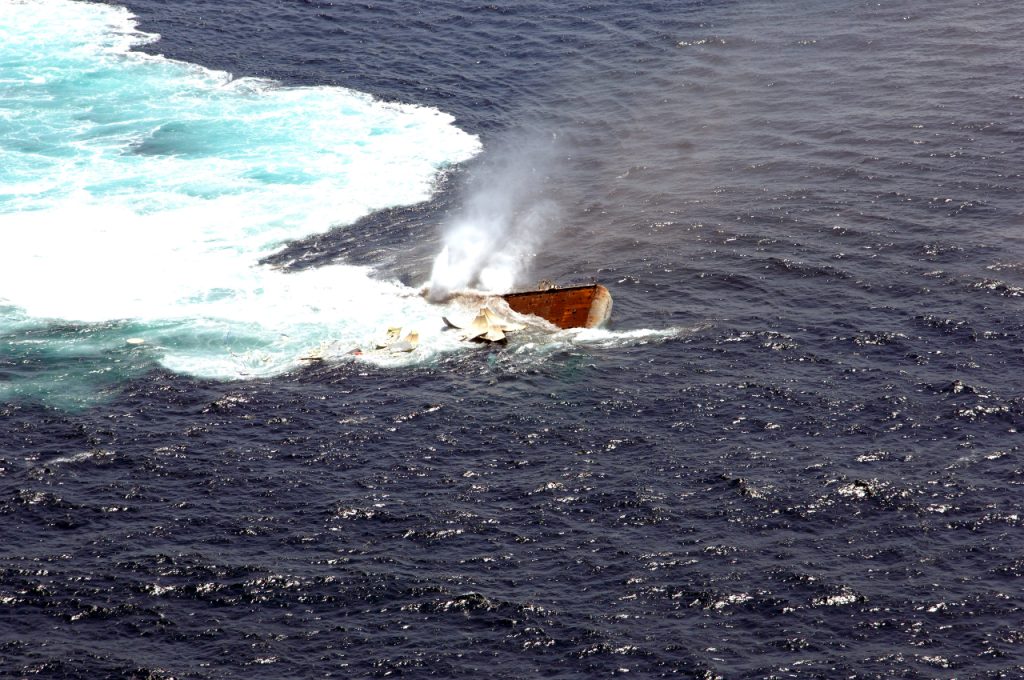 Years ago, I was scheduled to dive the Mighty O, but my trip was canceled due to bad weather, so I contacted my friend Walt Hartley, owner of Dive30A. He has been diving for over twenty-two years, is a double certified Open Water Dive Instructor with specialties in Emergency First Response Instruction, and full cave diver certifications. He volunteers as the board president for the South Walton Artificial Reef Association (SWARA), and has been diving all around the world. Walt has the right stuff. He has been down on the Oriskany five times, and generously agreed to share his memories of what he refers to as “The Everest” of shipwreck dives:

“Descending down the anchor line, sinking into the blue beyond, the superstructure of this enormous ship begins to materialize,” Walt said. “My first dives on the Oriskany were on air with a single tank. We buzzed the top of  the control tower as we descended, slowing to a stop right around 115 feet.

We gazed down at the flight deck, still another 30 feet below us, and our eyes slowly rose, following the huge deck outward into a ghostly cobalt distance.

The bottom was nowhere in sight and the edge of the ship just faded into the abyss. It felt like we were on the roof of a skyscraper looking out over a city. I turned to either side to check on my teammates and our faces all shared the same sort of hollow expression like, ‘my brain is still processing this’-kind-of-awe. The sheer size and scale of this ship is literally mind-blowing. Even as we spun around to face the tower, we all did a little double-take, looking up and down this gigantic, soaring structure and realizing that this is only the tip of the iceberg.” 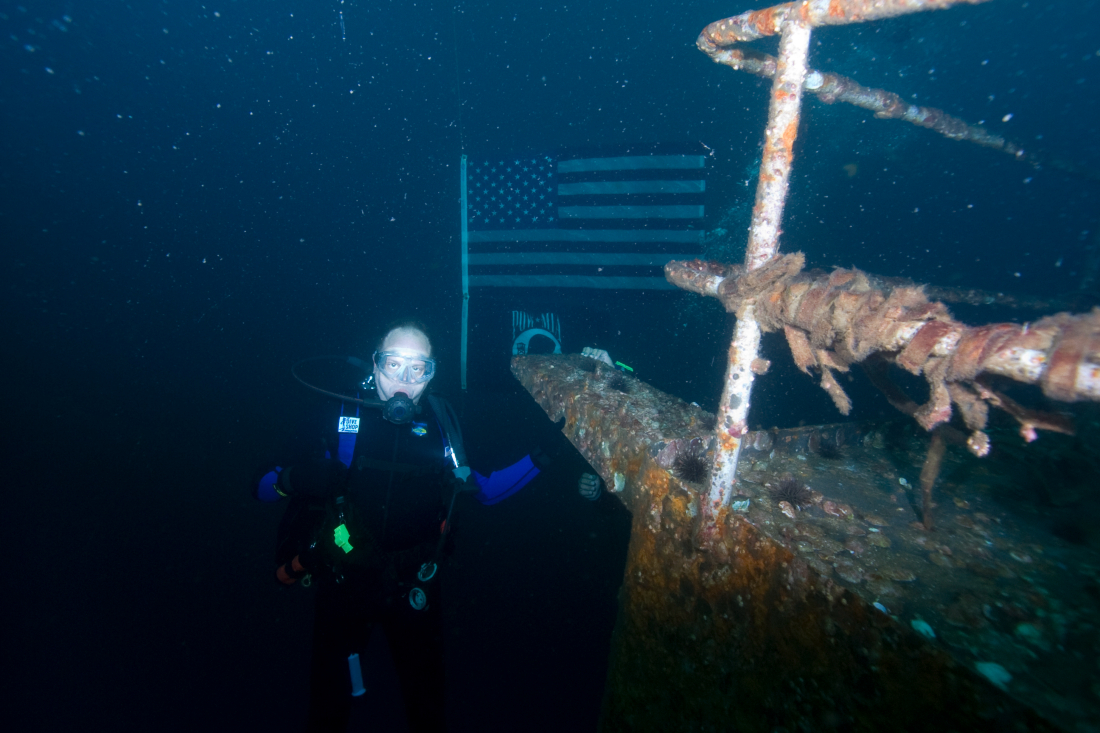 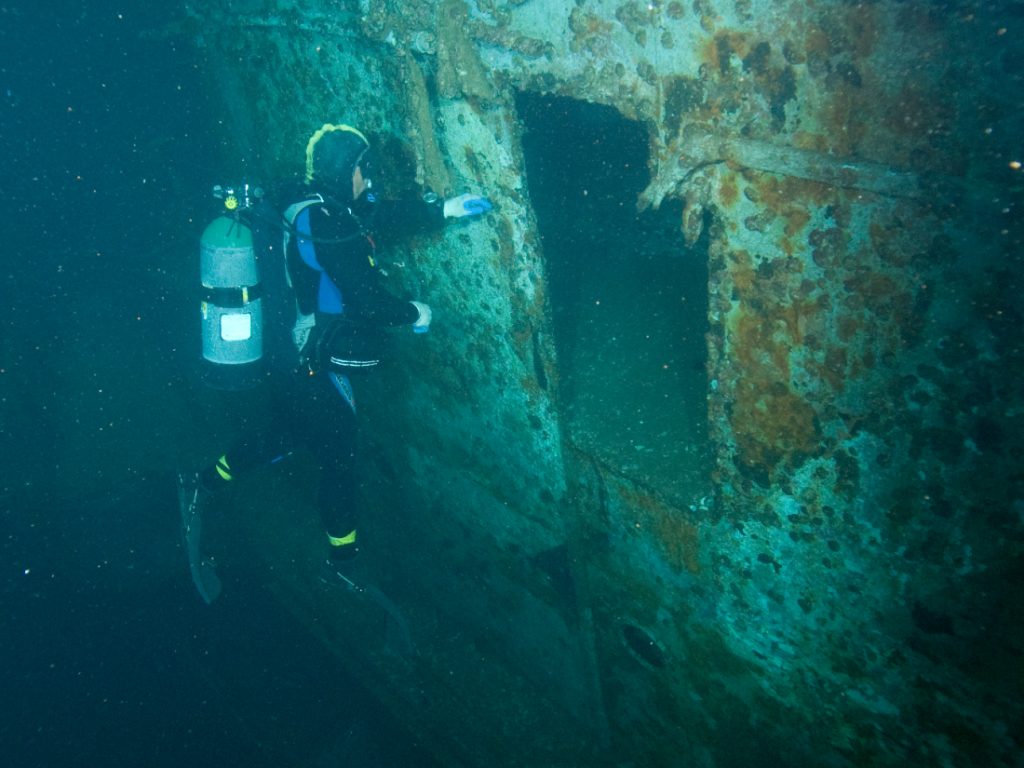 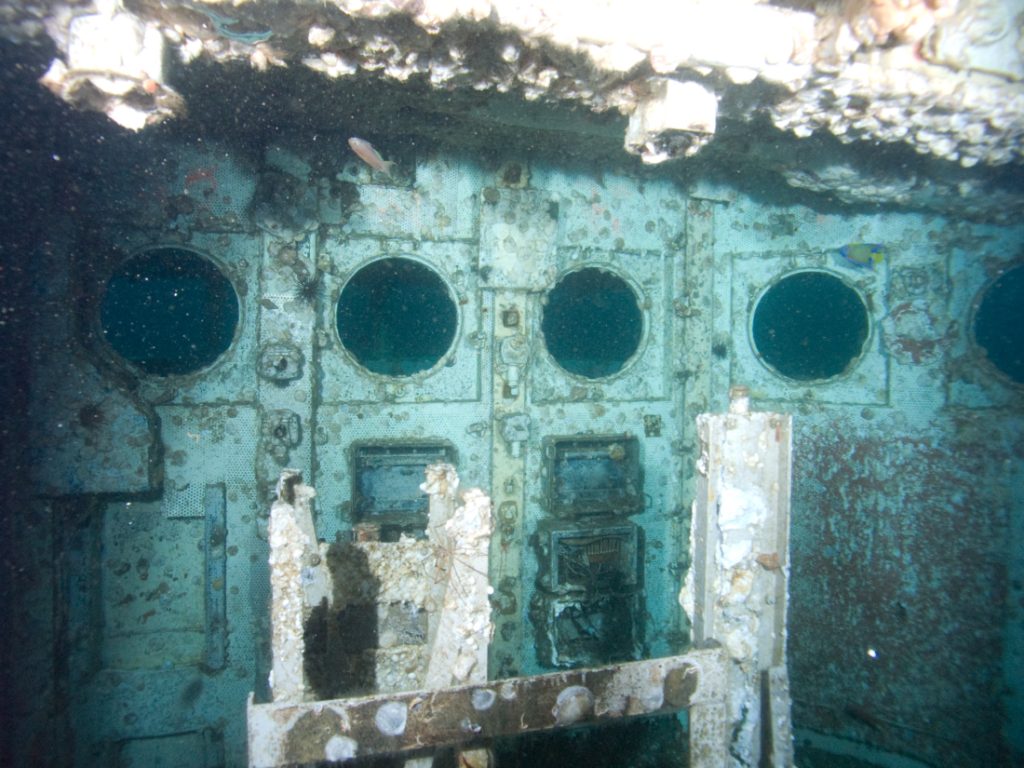 A few years later, Walt was able to return to the Oriskany, but this time with mixed gas, more tanks, and a good bit more training and experience.

“It was on these dives that I really began to perceive the true magnitude and immensity of the Mighty ‘O’,” he recalled. “Using back-mounted doubles full of normoxic trimix (basically a mix of air and helium) plus travel gas and deco bottles, I was able to explore parts of the wreck I wasn’t even aware of before. I glided past the flight deck and gently swooped into the hangar bay — dark, but out of the current — and felt like I was flying an X-wing to the core of the Death Star. Swimming around the ‘screws’ made me think of the Titanic—aircraft carrier props are humongous! Numerous portholes and doorways invite divers into the darkness. It would be easy to get lost exploring what has to be miles of corridors on the inside. But with proper training and the right attitude, you’re in for a truly unforgettable dive.”

The USS Oriskany has truly made her transition from the ravages of wartime to an underwater wonderland. In her sixteen years under the surface, living corals and sponges prolifically grow from this behemoth wreck structure, and she sustains so much life. And to this day, with the help of a nice Gulf current, she is still flying her American Flag.