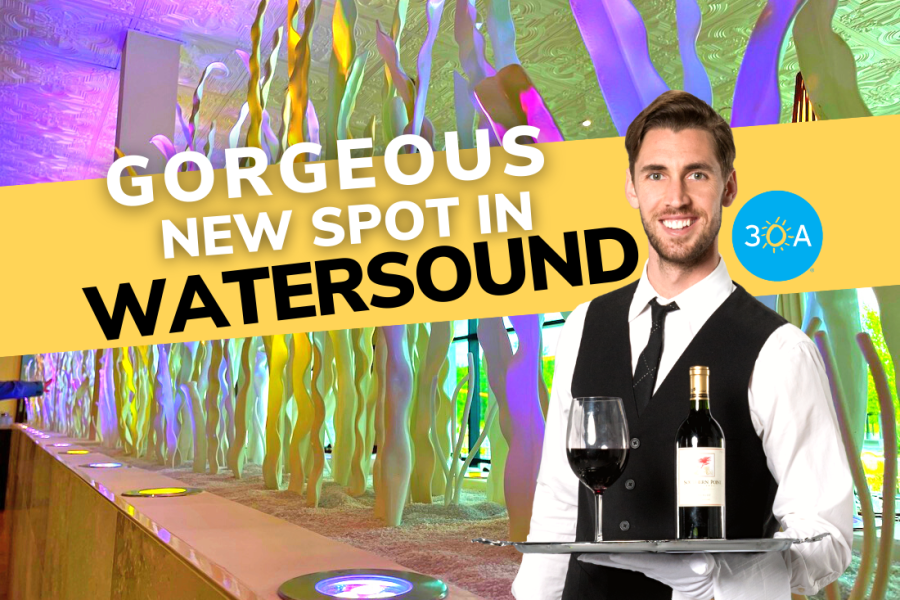 Every detail about Ambrosia speaks to this commitment. The luxe space designed by Paige Whitten is timelessly coastal with its rich creams, touches of gold, and the centerpiece, a seascape sculpture atop the dividing wall in the dining room. The gentle waving kelp attached to a sand-strewn base shines like the ocean’s floor.

But it is a detail you can’t see that shows the intentionality of the team behind Ambrosia. The intricate ceiling tiles running throughout the restaurant have soundboards attached to dampen noise bouncing off the hard surfaces in the restaurant. Even the tables have noise-reducing layers. 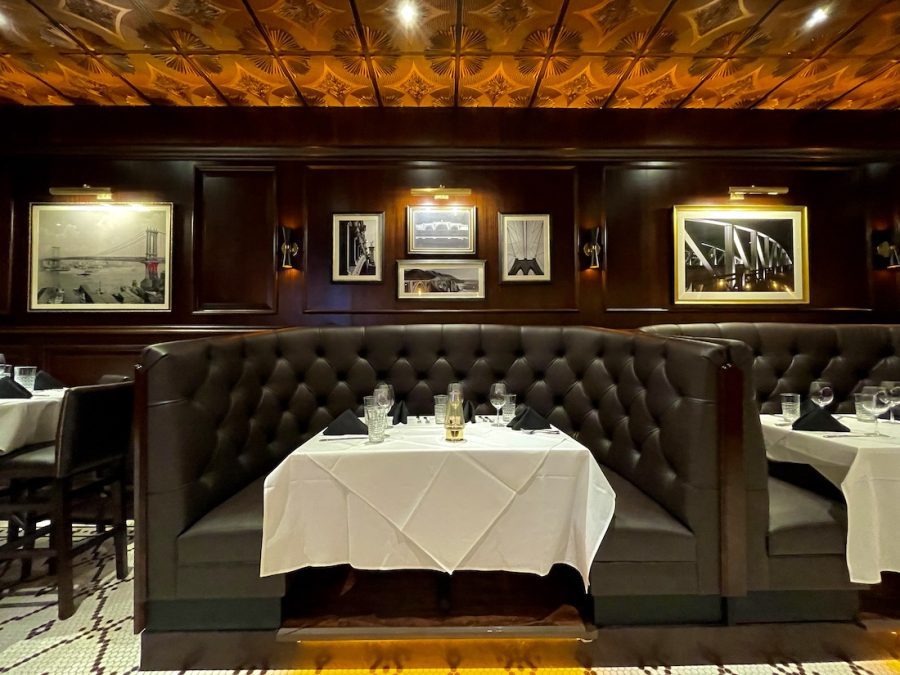 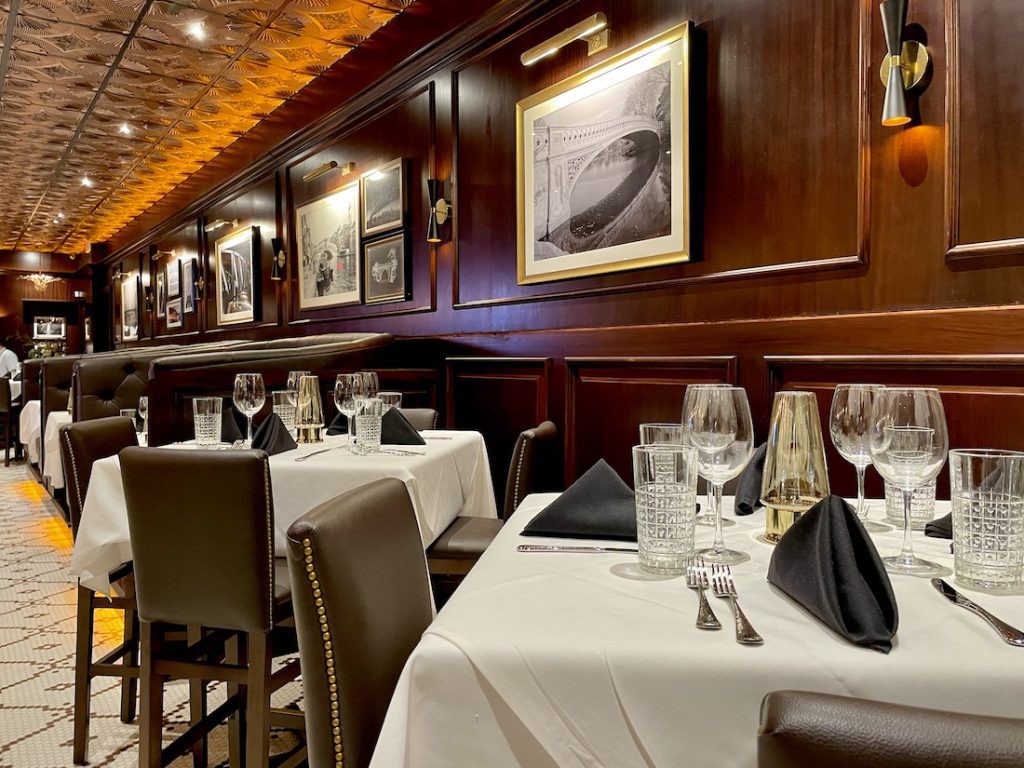 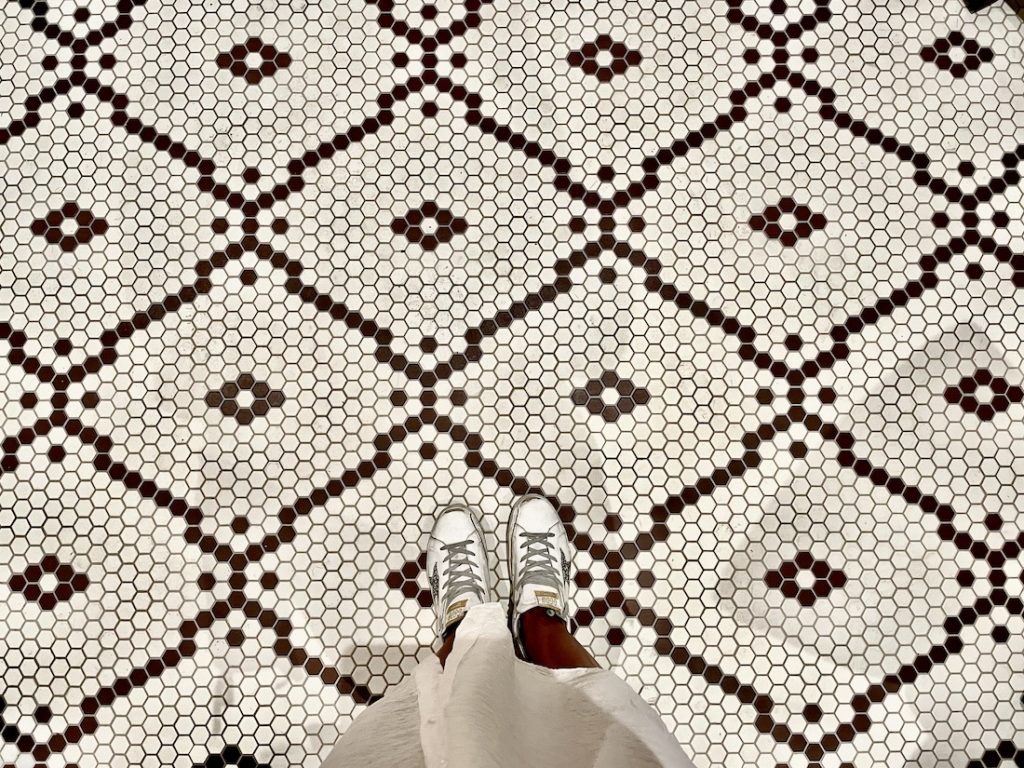 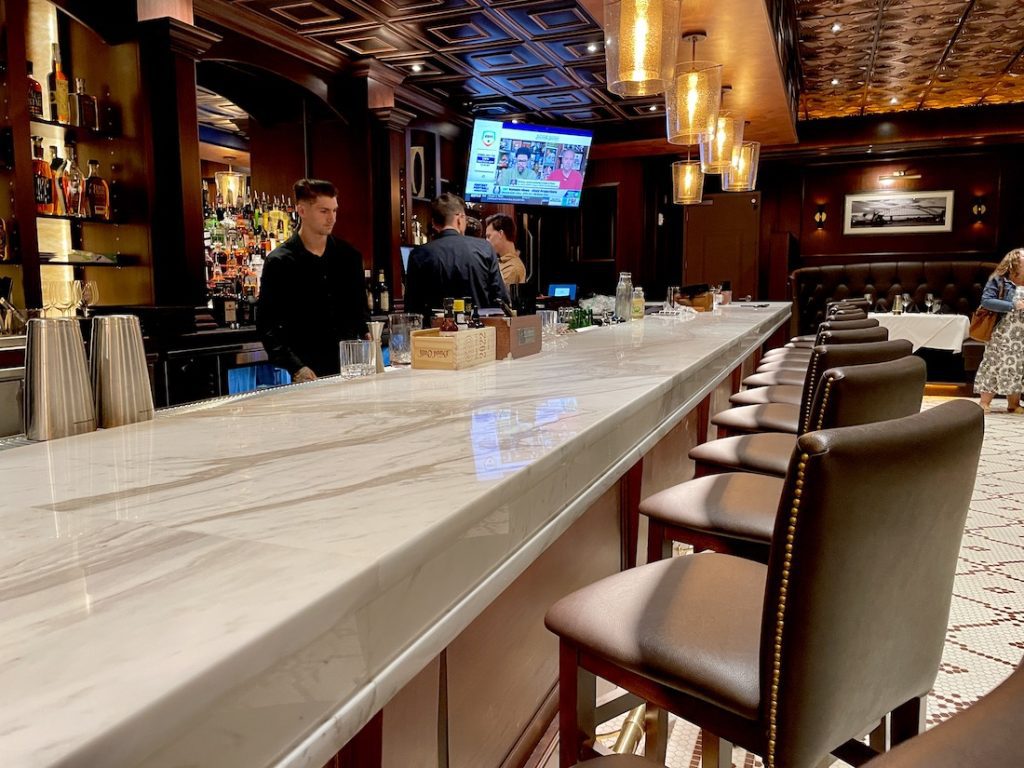 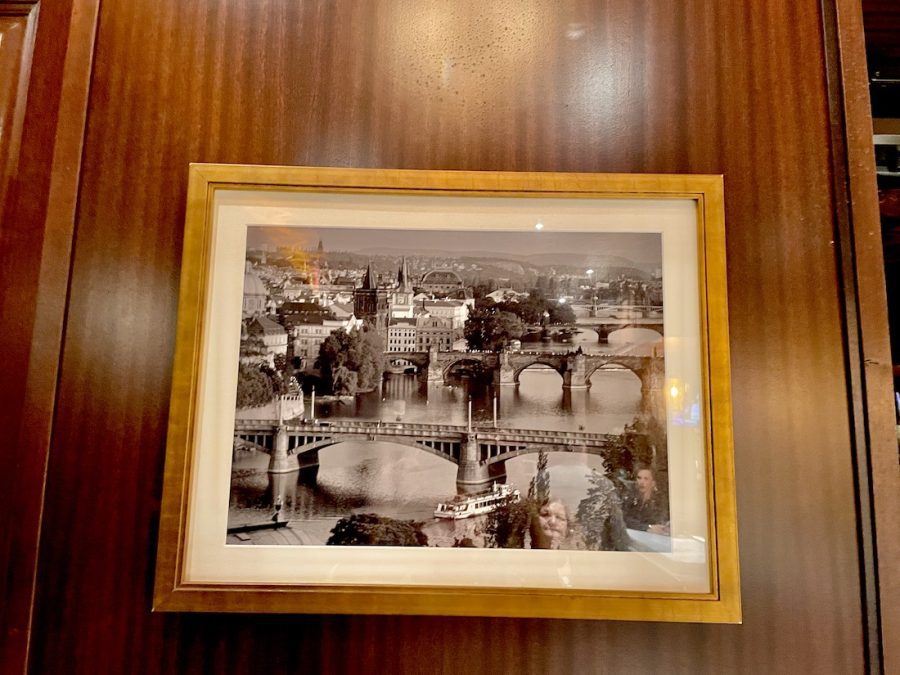 The thoughtful touches continue in the wine cave. The 300-plus collection was chosen based on the stories they tell. Russ excitedly told me the story of being at Caymus Vineyards (owned by the Wagner family), sampling wine when Jenny, Chuck Wagner’s daughter, came running in with the first-ever bottle she produced. Jenny signed it on the spot for Russ, and now Caymus wines grace the shelves at Ambrosia.

As he finishes that story, his hero-support wife Lauren pulls a bottle of Rombauer Chardonnay out, and Russ clues me into the secret story. In 1972, Koerner and Joan Rombauer moved their family, including two horses and five dogs to California wine country. Great aunt Irma Rombauer wrote the iconic cookbook, The Joy of Cooking. Now the corks in Rombauer wines bear the phrase “joy of wine” and a small checkerboard homage graces the bottom of the cork.

Like the restaurant, the wine is about the people. 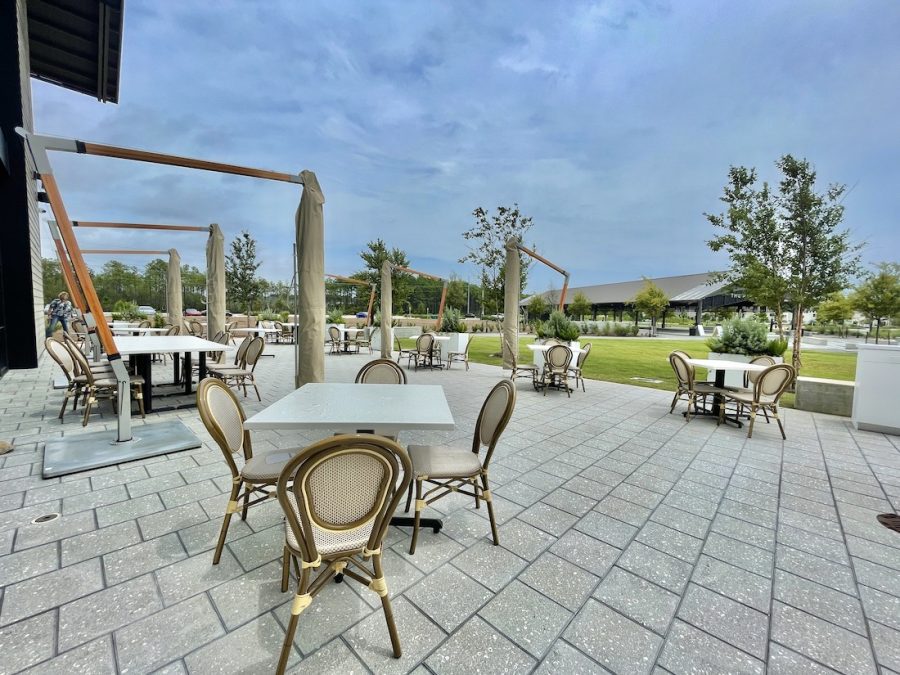 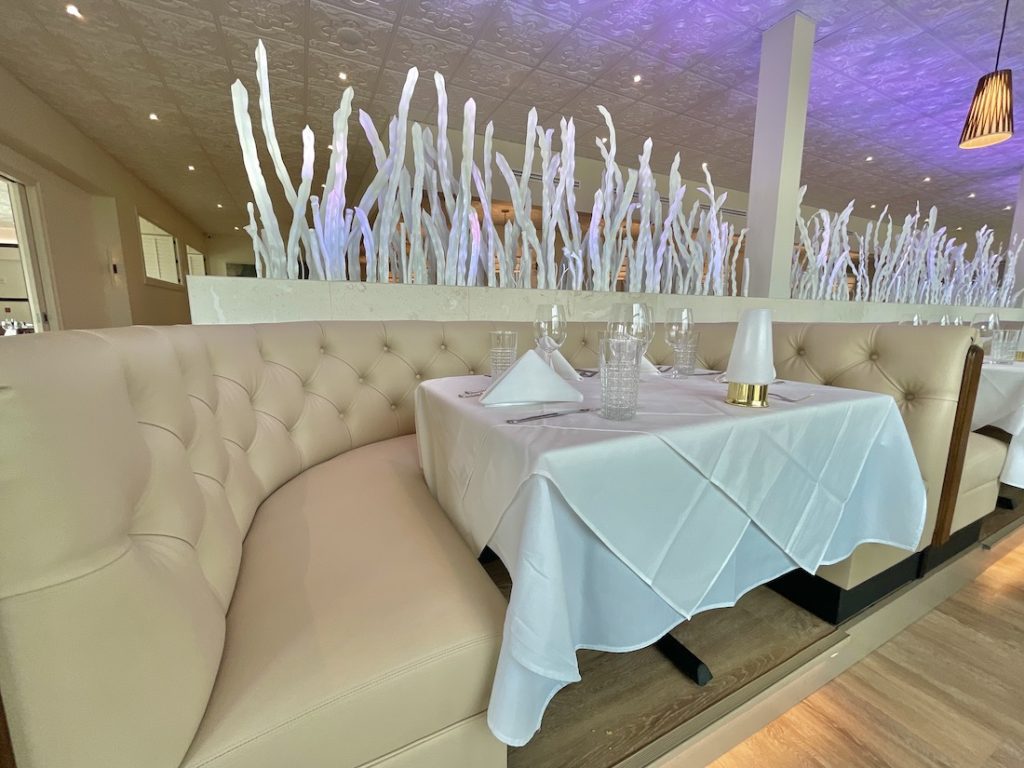 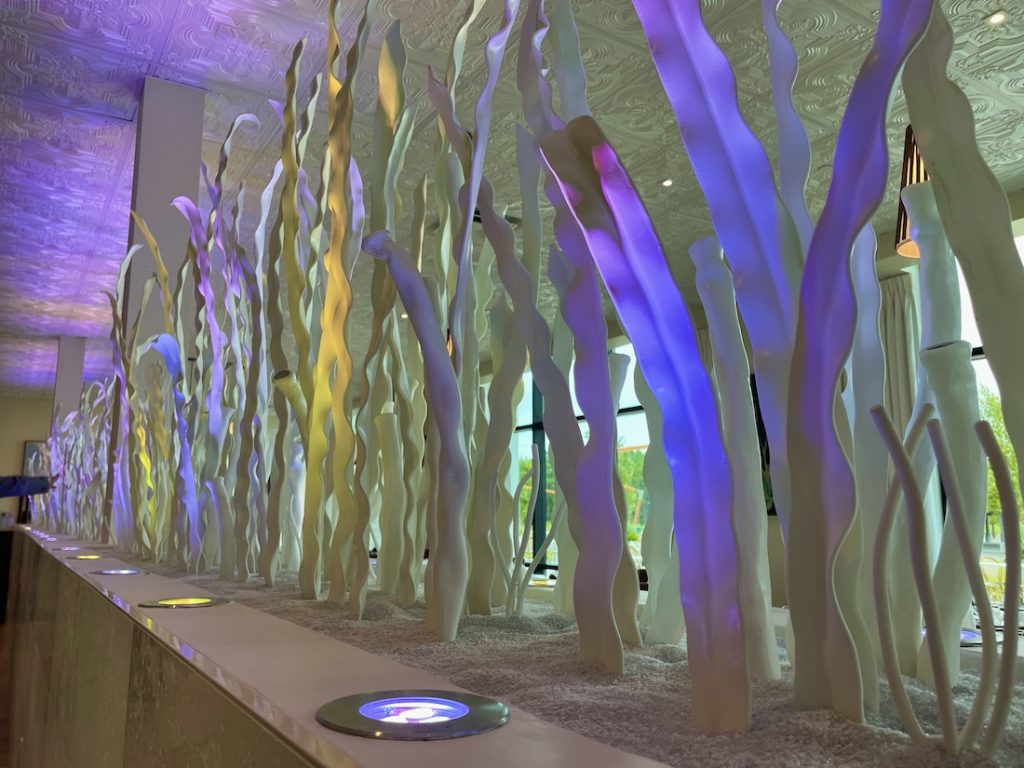 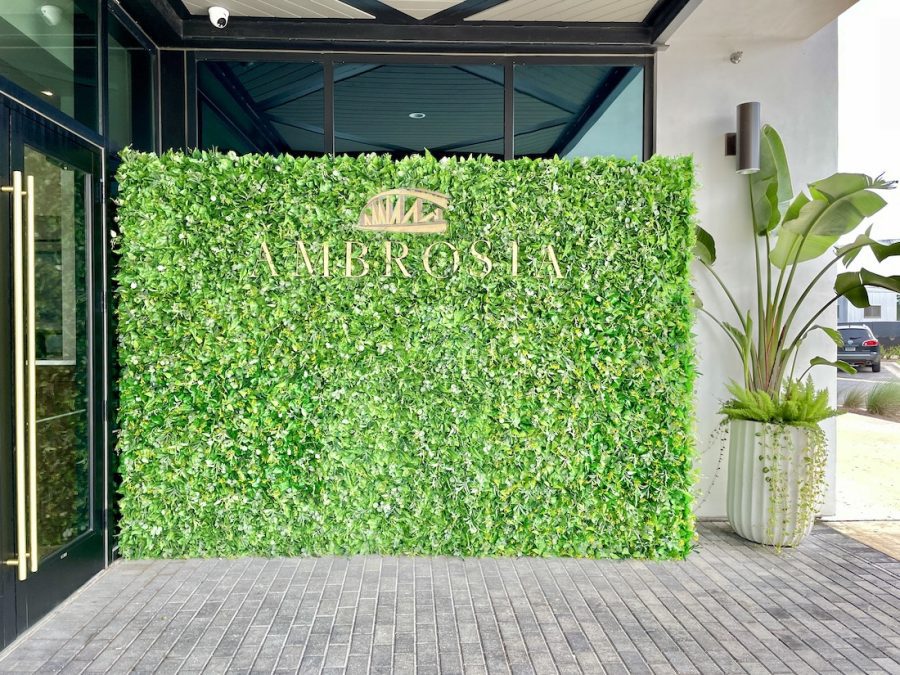 The story continues in the bar room themed after great bridges. Russ’ friend Charles Alexander came up with the idea and as an homage, a vintage photo of The Charles Bridge hangs on the wall. In the center of the space sits a photo taken by Lauren of the Watersound Bridge, which happens to also be Ambrosia’s logo. But it is the bridge just to the right that catches me. The photo shows the bridge in Central Park, New York. Russ reveals it is where he and Lauren married.

Like the wine, the decor is about people. Down to the signed silverware, the stories are everywhere.

As Russ and I talk about the menu, he tells me of his and his partners’ commitment to the freshest possible ingredients. But it’s more than that. He and Daryn Garcia, Executive Chef and Partner, went to the docks in Panama City to watch the fisherman unload their catch. They’ve journeyed to Atlanta to talk to the butcher who takes care of their steaks. They consumed eight meals a day in New Orleans to understand how ingredients can work in concert. They followed the trails their proteins follow so they know they’re getting the best products, the nectar of the gods, for their customers. 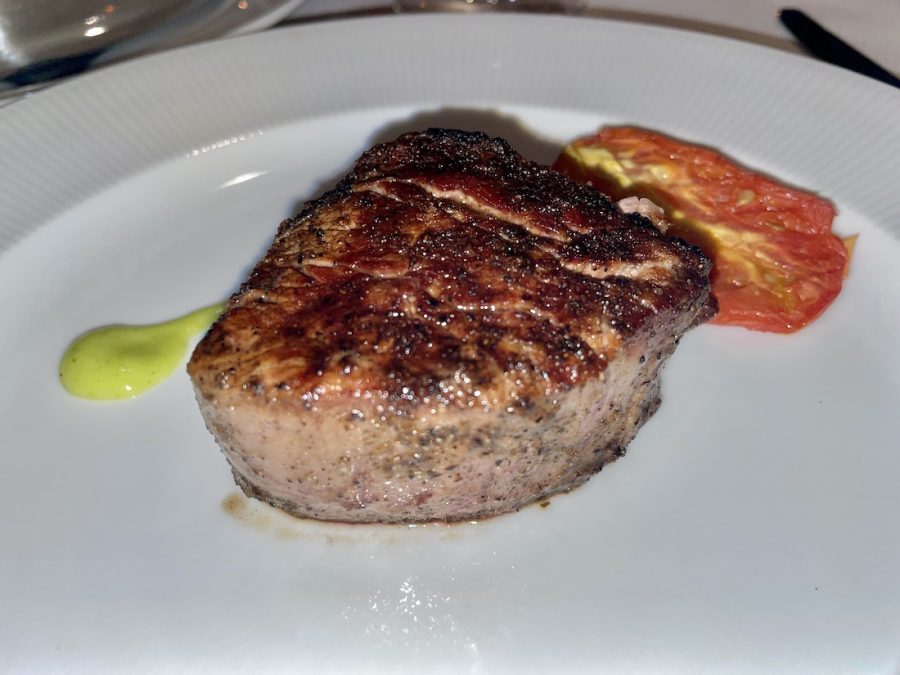 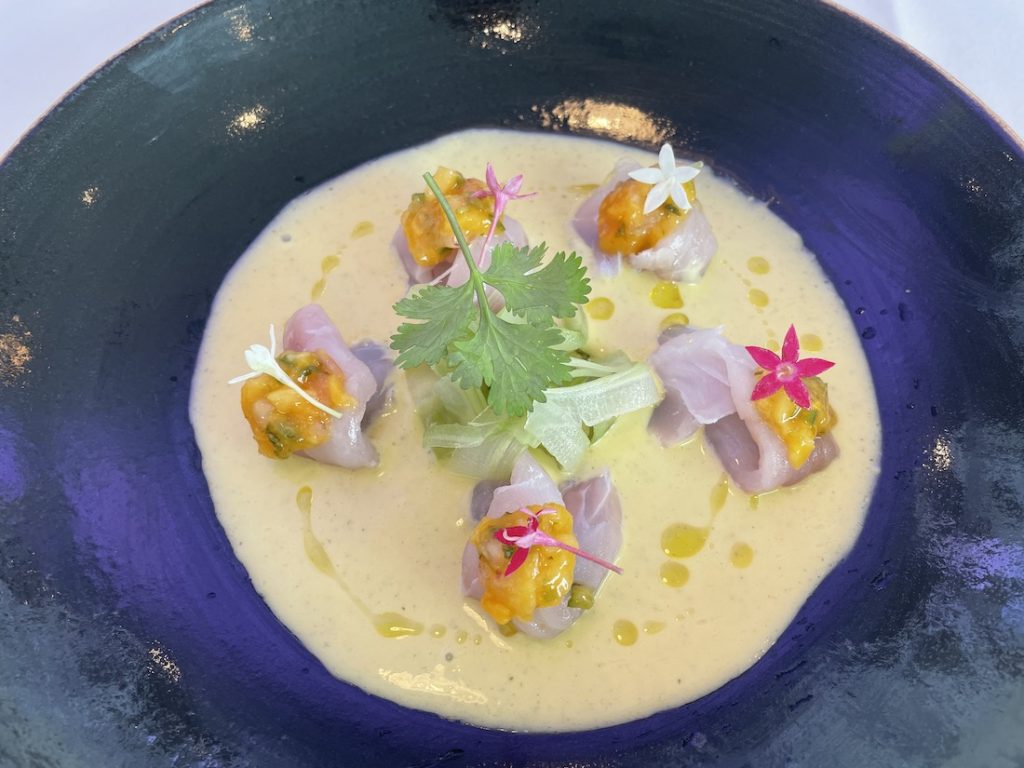 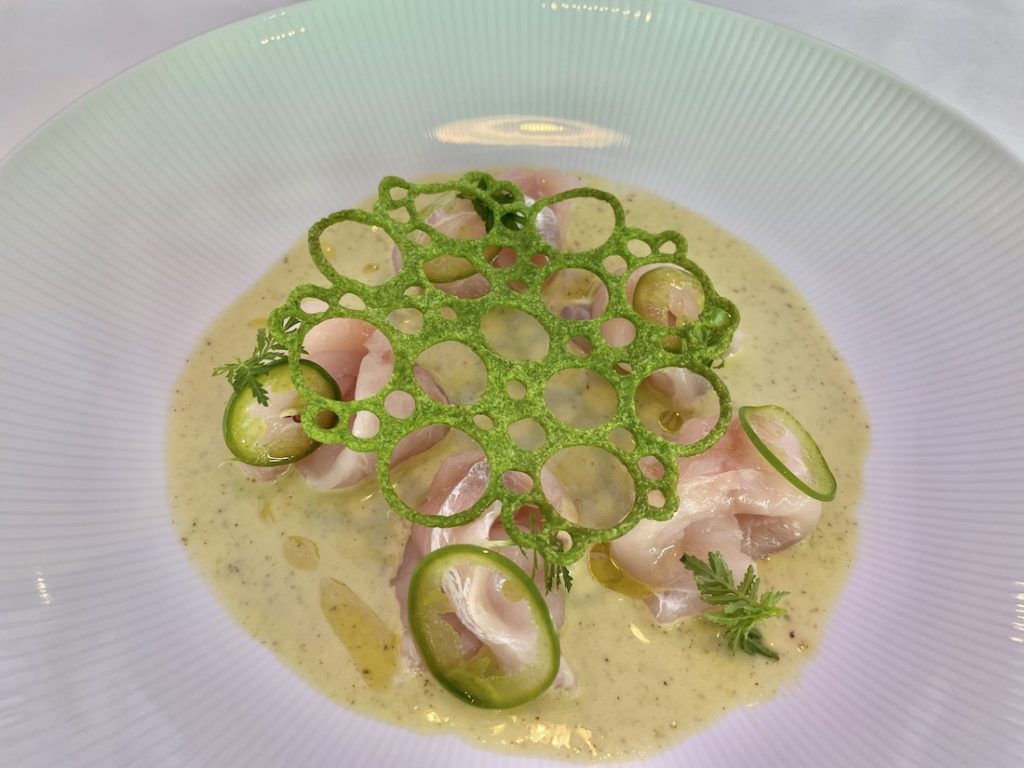 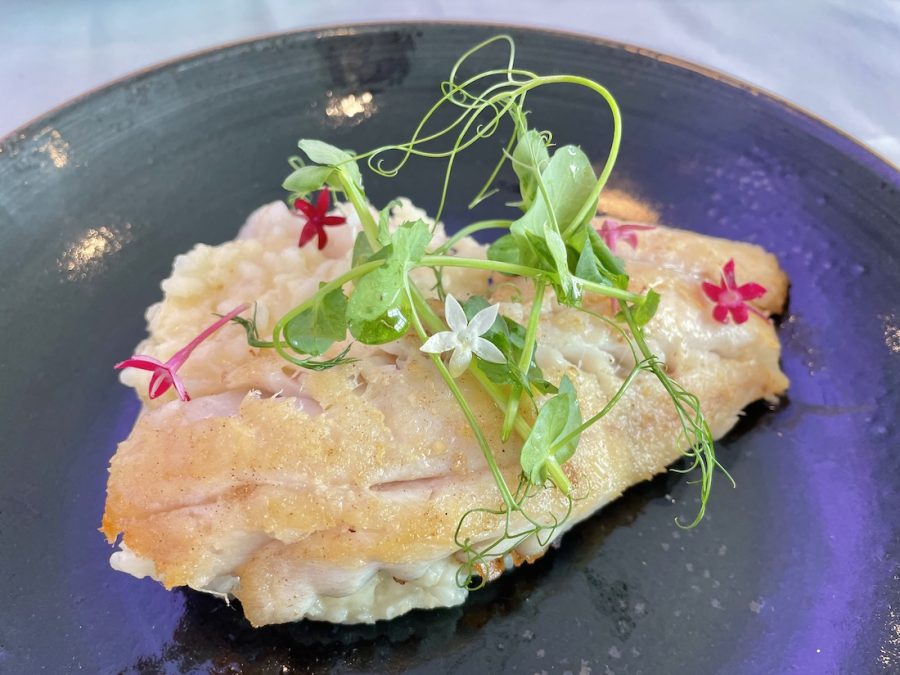 The commitment to shortening the distance between the food and customers is evident in the thoughtful menu. Squash blossoms filled with tangy goat cheese, crisped to perfection start the meal. Then comes the Fruits de Mer, a medley of grouper, jumbo prawns, and sea scallops resting in a tomato and saffron sauce. On the side of the bowl sits two hunks of sourdough from Black Bear Bread Company—the place to get bread. The rustic preparation comforts, and I imagine enjoying this on one of those rare chilly Gulf Coast nights, sopping up the sauce with that crusty bread.

John Poates, the third partner and the man in charge of all things front of the house, loves the grouper so I follow his lead for our second dish. The ample fish is not overly seasoned, allowing the freshness of the fish to take center stage. It sits atop a mound of creamy risotto dotted with plump shrimp and sweet kernels of corn—the nutty parmesan flavor fused with the sweetness of the corn and shrimp perfectly foil the tender grouper.

Poates’ deft hand on the service-end is evident throughout the meal. He, Russ, and Daryn share a guest-first mentality, and each moment within this gorgeous space reflects that philosophy. 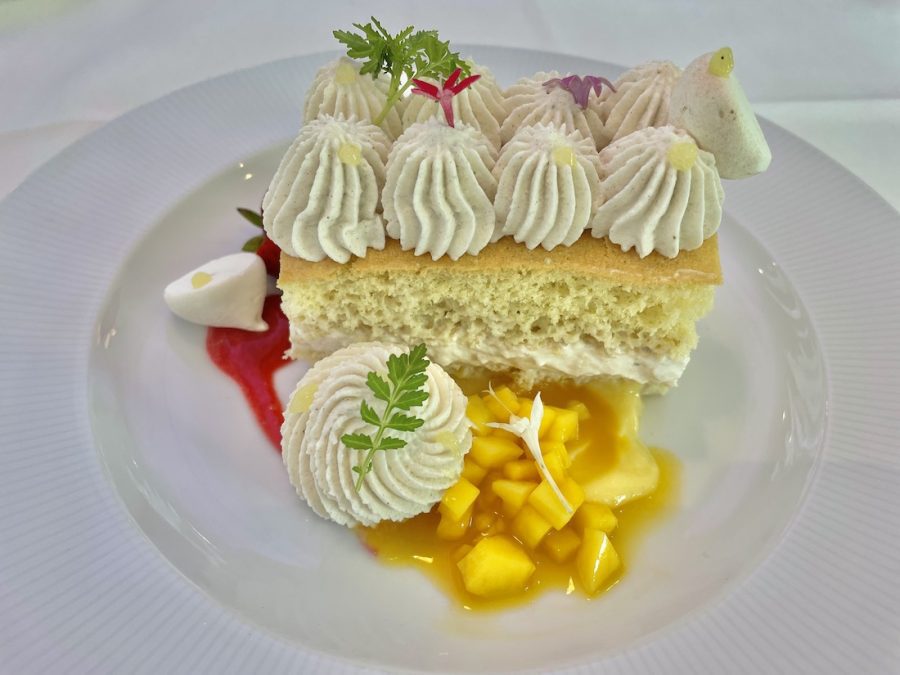 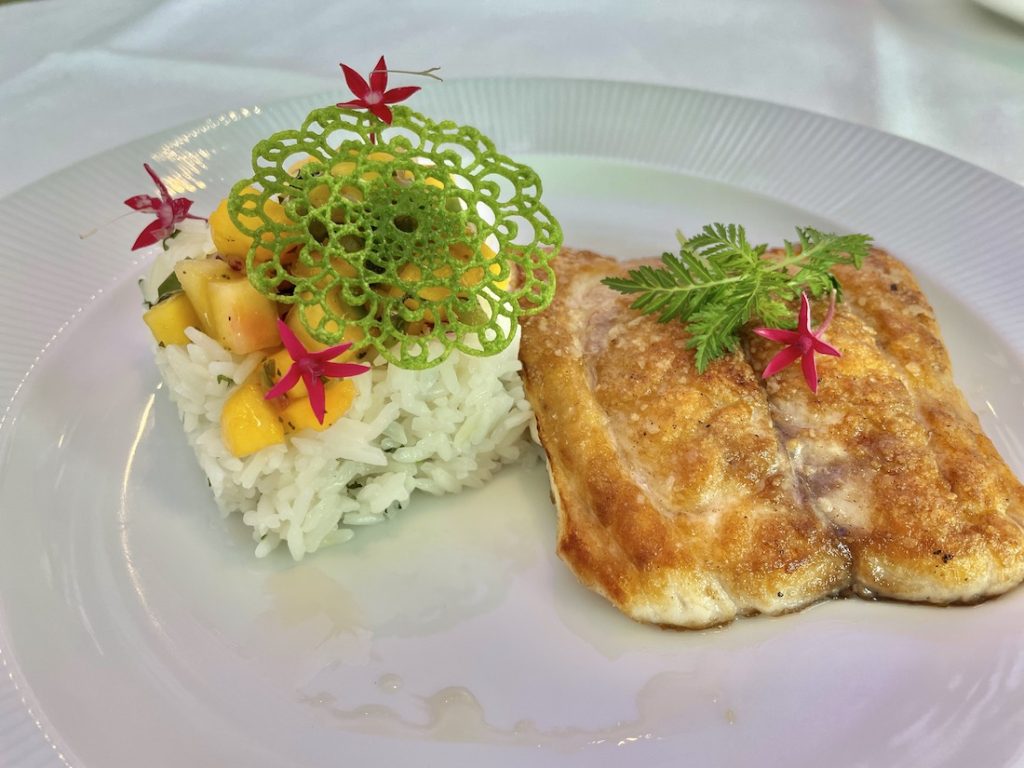 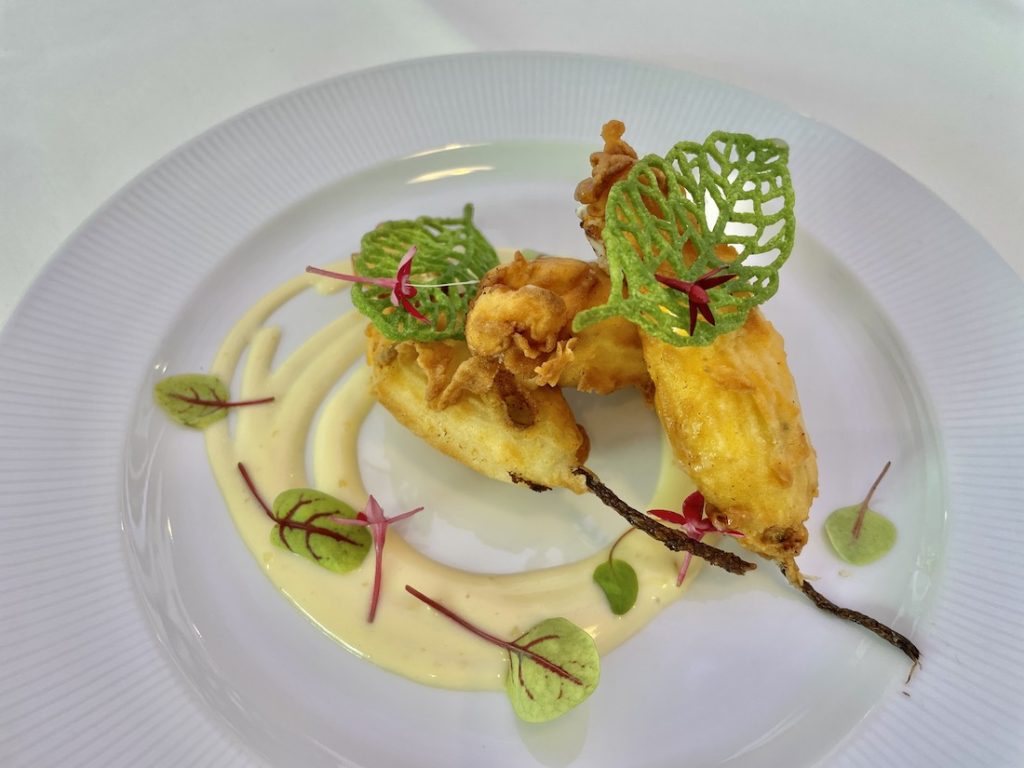 “I’m a big believer in energy. From when you first step out of the car to the first person to greet you at the door, to the person who shows you to the restroom to the food we serve you, our recipe for success is positive energy,” says John.

There was a lot of positivity when dessert arrived. The tres leches cake visually stuns with its colorful key lime cremeaux, pineapple fluid gel dots, and mango chutney. But it’s the flavors that ensnare. The cake though soaked in the three milks along with some white rum maintains a soft, but not soggy texture. The spiced chantilly cream layered between the cake is like drinking the best horchata you’ve ever had, fragrant with cinnamon and other warm spices.

They just opened on August 14th, 2022, but the dining experience feels honed and polished. The over 12,000 square feet of space between inside and outside seating resonates with intimacy and well-curated choices.

“If I can make somebody’s one day, one occasion special, that’s what I love. I’ve seen people meet on dates, get married, have children—to see that evolution from the first date to babies is pretty special. For me, the restaurant isn’t about us, it’s about them,” said Russ. 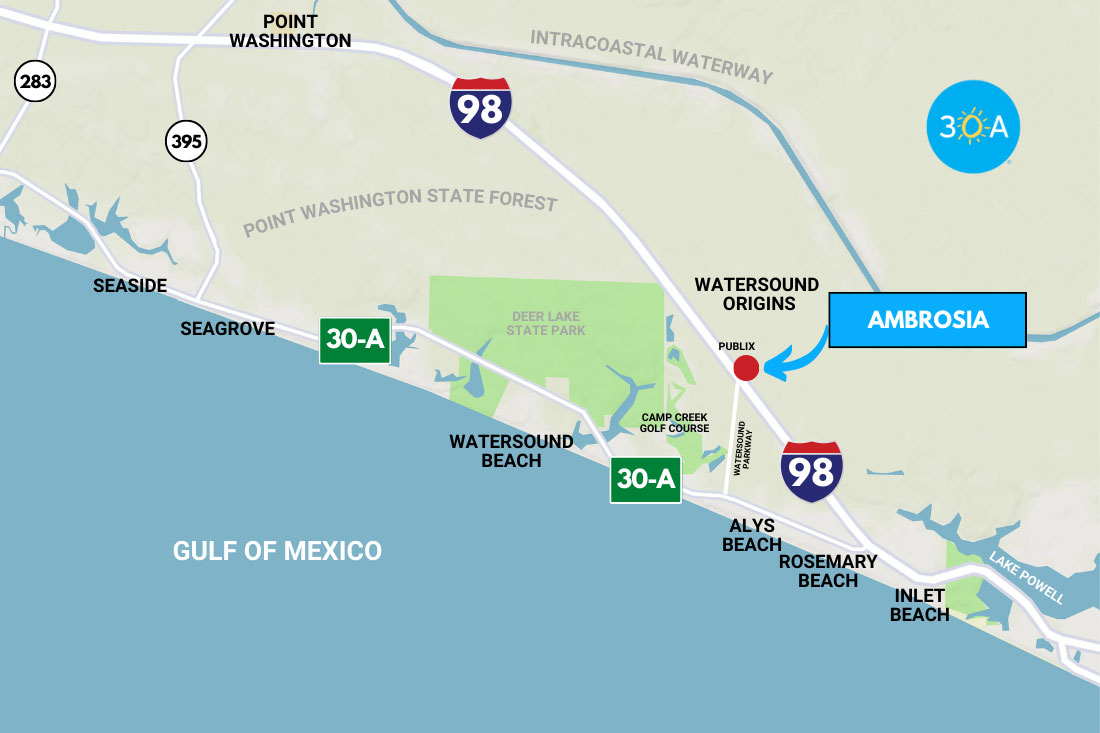