7 Astounding Facts About the Blue Button Jellyfish - 30A

If you’ve ever come across a mysterious Blue Button creature, you might have wondered what they are and how they function. They are found on the beaches of 30A fairly regularly and people are always very puzzled by them.  Here are seven facts about the Porpita Porpita, more commonly known as the Blue Button Jellyfish.

1. It’s similar, but it isn’t actually a jellyfish.

The Blue Button is superficially similar to a jellyfish but is more similar to the Portuguese Man O’ War which is a Siphonophore (also a colony of polyps).

The Blue Button species can be found floating ashore the Gulf of Mexico (and found here along 30A) and in other parts of the Pacific, Atlantic and Indian oceans. 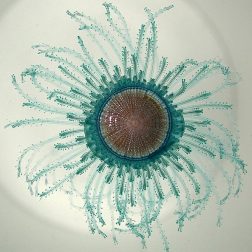 2. It has two main body parts

The Float and the Hydroid Colony. The Float is considered the main body. It is a golden brown color with a round and disc-like shape. The Hydroid Colony are the branches that extend out and look like tentacles. These may appear in a bright blue, turquoise or yellow color. Each of the branches end in knobs of stinging cells called Nematocysts.

Sounds gross doesn’t it? Underneath the float is what serves and functions as the entrance for food and exit for waste.

The Blue Button typically feed on copepods and crustacean larvae. In return, they are preyed upon by sea slugs and sea-snails.

4. They don’t all function the same way.

This species is made of individual zooids that float together at the water’s surface and each of these species function differently. Some of those roles include the protector, reproducer and finding food/eating.

5. They are both male and female.

Blue buttons are hermaphrodites which means they have both male and female sex organs so they can actually reproduce on their own.

This process happens when the reproductive polyp release eggs and sperm to the water then fertilization takes place. After this, the eggs turn into larvae which is the earliest stage of the polyp. Later the larvae turn into adult polyps. The fully grown polyp then takes on its new role.

The Blue Button lives on the surface of the sea and, they are free drifters.

Their gaseous bodies only allow them to float so they can’t swim deep like real jellyfish.

If you come in contact with one of these creatures, do not touch it. They are usually painless but can cause irritation of the skin. Blue Buttons typically move with the winds, currents and tides. They usually wash ashore on beaches during summer months.

SUMMER GEORGE is a student at the University of Alabama majoring in Public Relations and Foreign Language and Literature. Summer is an intern with 30A.
/* */