Giving Tuesday...and Every Other Day: The Sonder Project - 30A 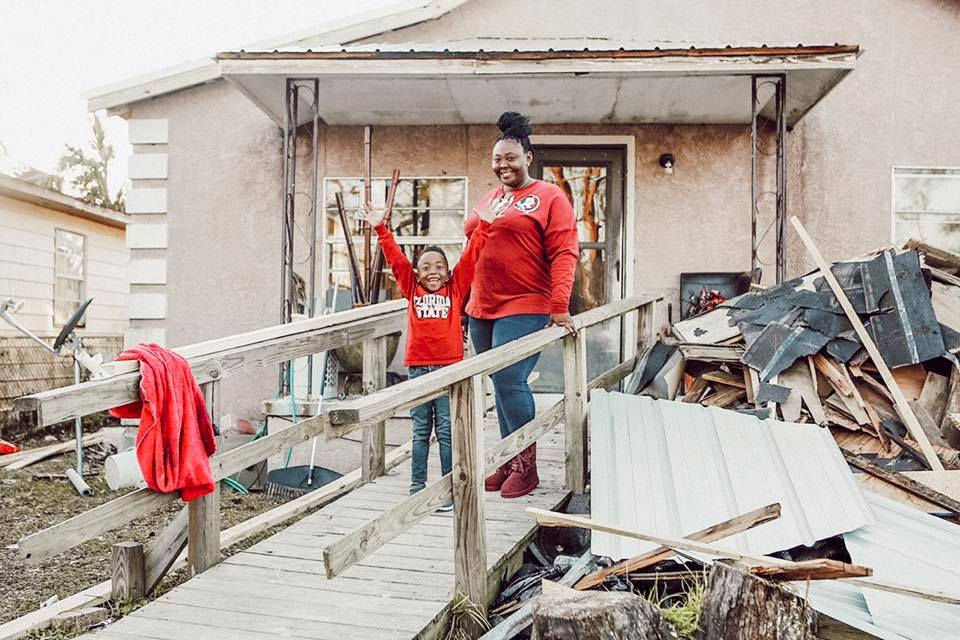 Meet one Panama City family whose roof was replaced and the interior of their home is being repaired thanks to the Sonder Project's ongoing efforts for Hurricane Michael recovery.

Compassion is contagious. And one non-profit program is spreading the give-back bug near and far. The Sonder Project was founded in 2014 when three Walton County based businesses – The 30A Company, YOLO Board, and 360 Blue – partnered to do good in communities, domestically and internationally.

In its infancy, the project aided funding for buildOn, a global non-profit organization focusing on building schools for children in the poorest countries on the planet, where school may be a quick lesson under a tree, if at all.

The Sonder Project funded a school in West Africa’s Burkino Faso with a population of 19 million people desperately seeking education and hope for future generations. The school was a success, but seeing the magnitude of need, Sonder Project quickly evolved from a long-distance supporter to an on the ground, hands-on relief effort. Not only were they funding the efforts through donations, they (and their recruits) traveled to Africa to get their hands dirty, their eyes open, and their hearts full. The Sonder Project was ALL IN.

For communities like Burkino Faso, education is joined by water and food in its scarcity. So, the Project extended its focus to meet those needs as well. To ensure both short-term relief and long-term sustainability, the labors of love now include building schools, digging wells, planting farms, providing irrigation for year-round harvesting, and giving local people the tools and knowledge to keep it going.

“Our mission is to strengthen communities by focusing on clean water, food security, and education,” says Chad Zibelman, CEO of the Sonder Project. Local needs, though present, seemed to pale in comparison to the fierce struggle of some international communities for daily survival. That changed on October 10, 2018. 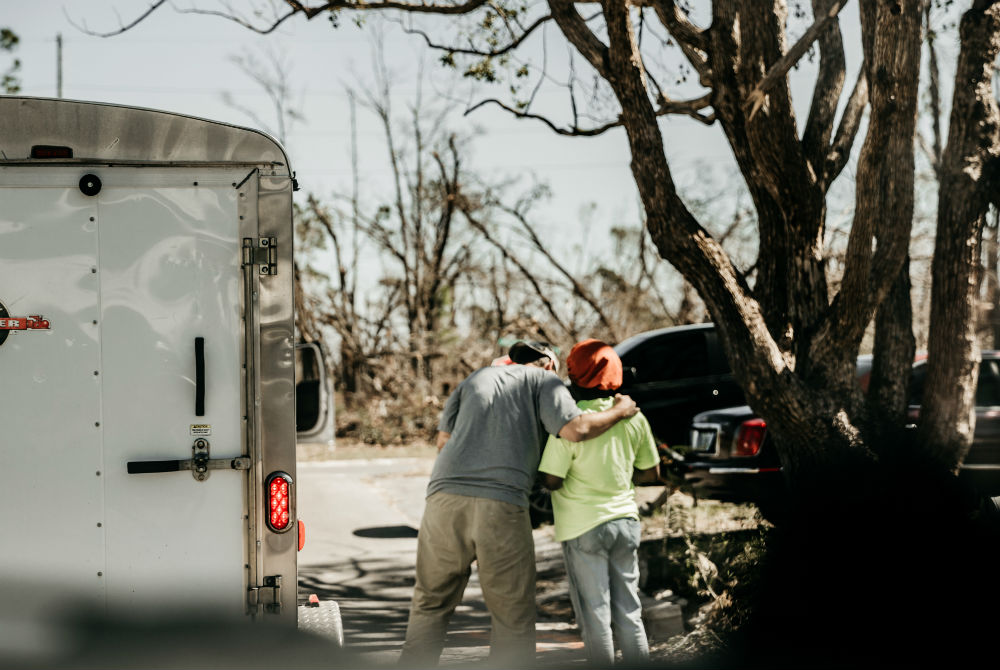 What began as a mere Category 1-2 storm grew quickly and unexpectedly into a deadly hurricane.

Hurricane Michael violently tore into the Panhandle like it had a score to settle. Nearly a Category 5 hurricane at landfall, in a matter of hours our neighbors, family, friends, and co-workers were fighting for their lives in a very raw and real way. Entire communities were destroyed, and countless people were left to survive inside the remains of their homes without food, water, electricity, communication, or medical care. The storm, spanning 350 miles across, left mass devastation and loss of life, no life in its path untouched.

Now the need for clean water, food security, and education was right here in the Sonder Project’s backyard about 40 miles east.

After the storm hit and without missing a beat, Sonder mobilized to shift all focus to hurricane relief and recovery efforts. It has become a philanthropic arm, a tool, for its three founding businesses to work together in the daily operation of rallying volunteers, distributing basic supplies, tarping roofs, cutting and clearing fallen trees, setting up hot meal stations, passing out hugs, lending ears, and giving strength and hope to our neighbors. Sonder volunteers are currently working almost daily in the low-income areas of Springfield and Millville.

Check out the story David Ganzy, one of the many resilient residents supported by The Sonder Project.

“We have supplies. Warehouses are full. What we need now are volunteers and monetary donations. We need experienced volunteers who are comfortable climbing up on roofs and running chainsaws. We need money, allowing us to spend on the ground as needs arise,” says Zibelman, who is one of only three paid employees of the Sonder Project. Every other person involved is a volunteer, donating their time, energy, money and love. 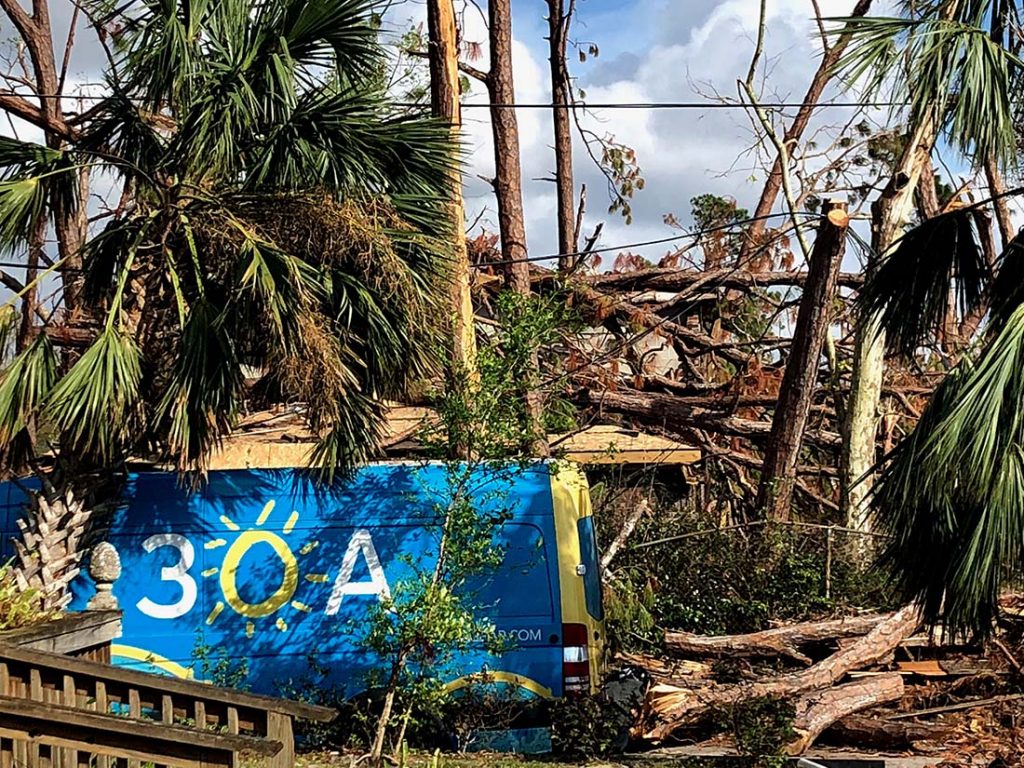 While it is out of the news cycle for the most part, the aftermath of Hurricane Michael is a long-term relief effort. “It’s a jog, not a sprint…a long road to recovery. Even if you’re not hearing about it in the news, there is still need that exists there. And we will be there responding to that need however long it takes,” Zibelman added.

Find out more about the Sonder Project’s efforts at their website. If you are so inclined, make Sonder a part of your Giving Tuesday by donating much needed funds to help them continue their work.

CHRISTY (CHICK) HUGHES is a freelance writer and a respiratory therapist living in South Walton. She and her husband moved to the beach in 2000.  One sunset…and the couple never looked back. Find her at her blog chickhughes.com.