Louis Louis: A Vibrant Family-Run Favorite With a French Bistro Vibe - 30A 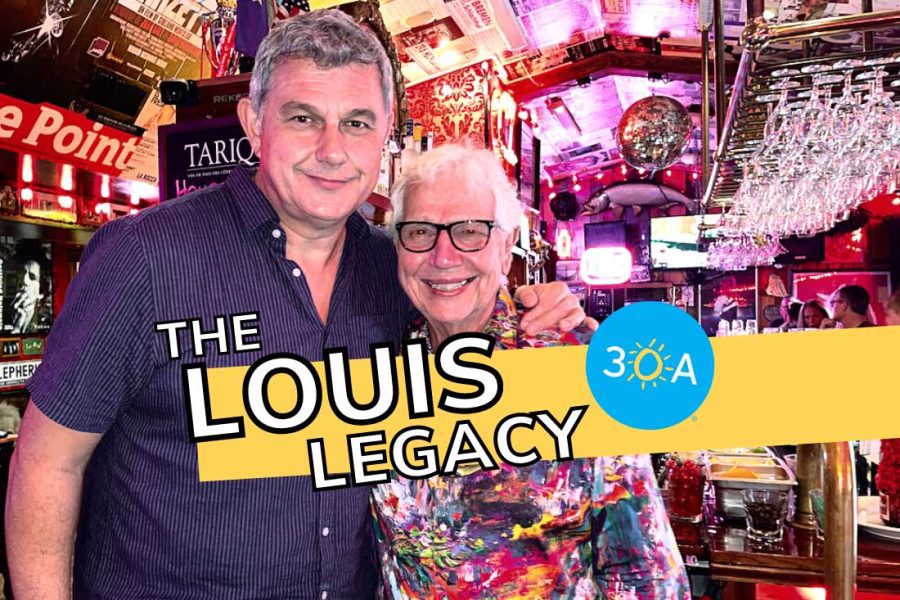 Did you know the Red Bar in Grayton Beach has a sister restaurant right across Highway 98? Louis Louis has the same kitsch vibe, and the same chalkboard menus, but you can get crabcakes every day, and there’s plenty of parking.

And if you’re lucky, you might catch sight of the restaurant’s namesake, Louis senior, the 80-year-old spitfire that insists on having a spot on the schedule.

Louis Petit started in restaurants in Liege, Belgium. He realized his childhood dream of living in America when he moved from Belgium to Little Rock, Arkansas to continue his culinary career.

Louis senior owned and operated restaurants in Arkansas while Oli and Philippe headed to the beach. The boys continued to hold a dream of working together with their father someday on a larger scale. When the spot where North Beach Social now stands came available, the moment came. Louis made his way to the beach, and they opened the 331. 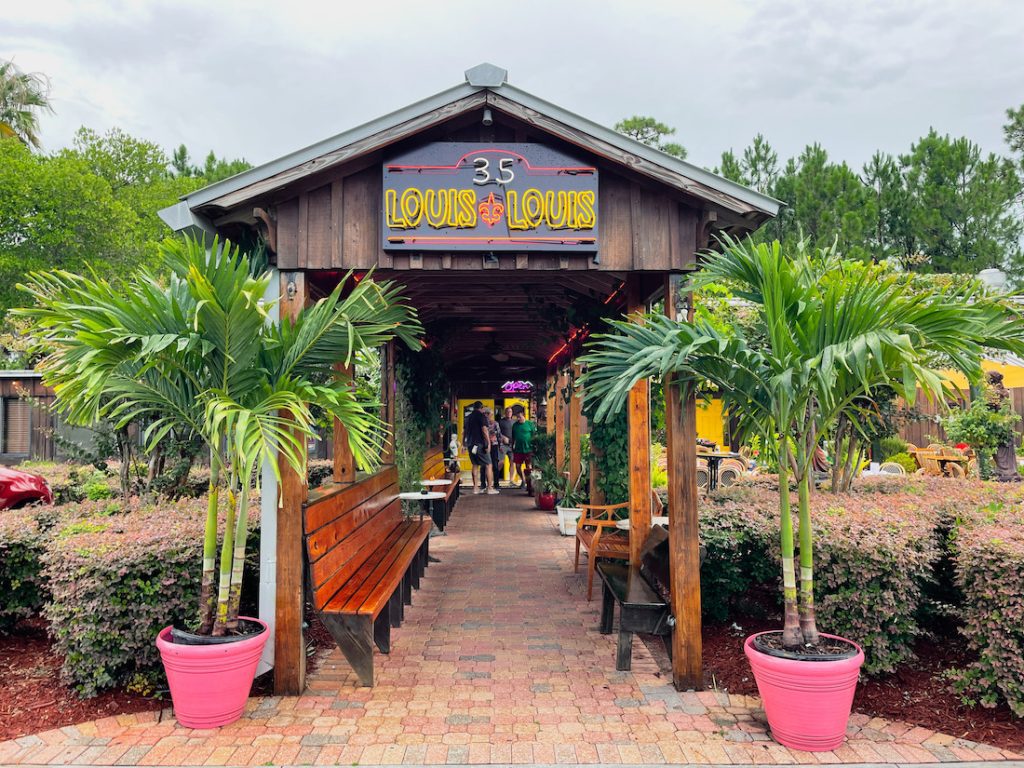 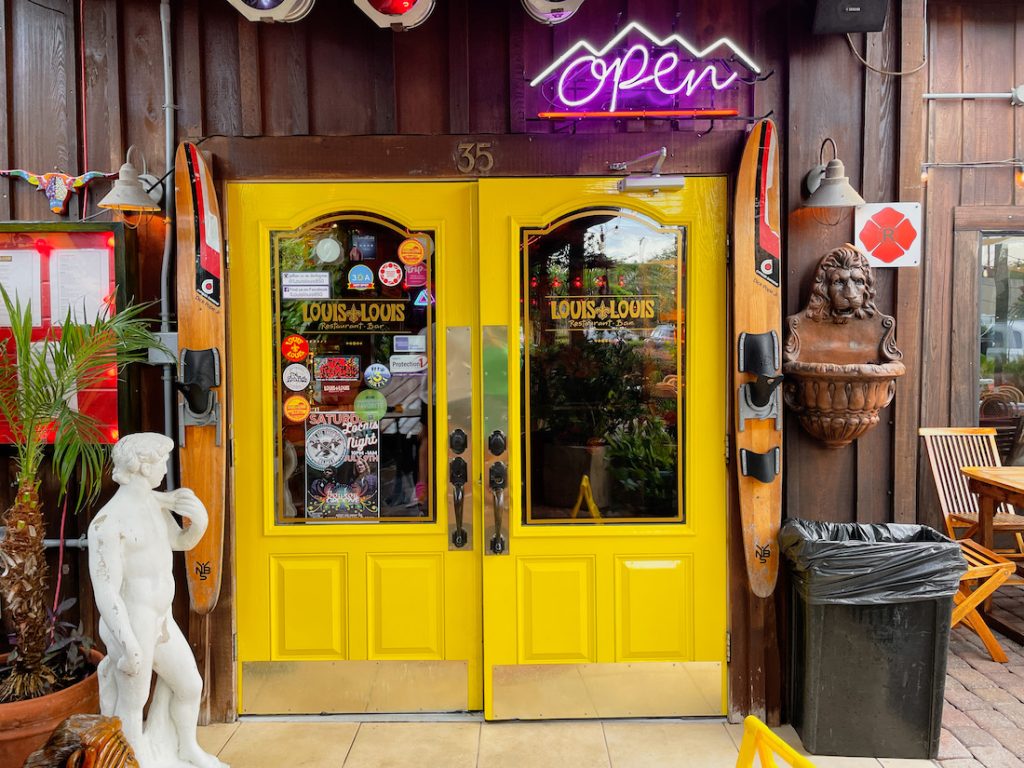 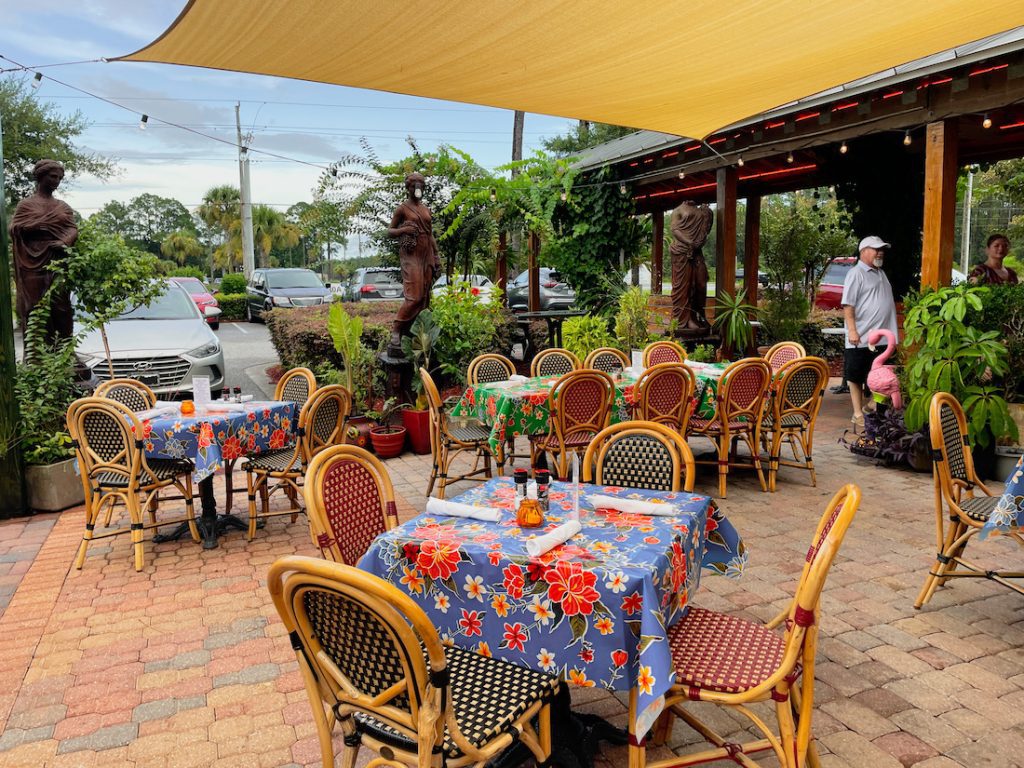 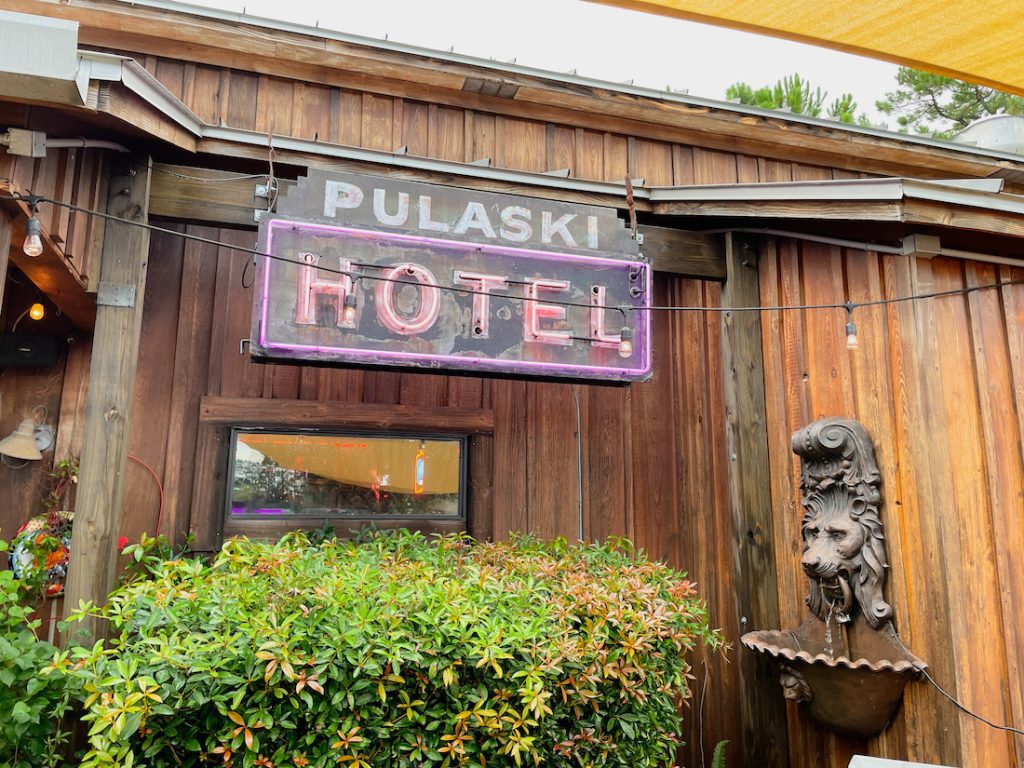 But, it was not fated to last. The bridge expansion cost the Petits their parking, and without spaces for cars, they couldn’t meet regulations for their liquor license. They gave the location up, and huddled together at the Red Bar.

The tides changed when news of an opportunity came via some Belgian friends. “They owned Cafe Provence on Highway 98, but wanted to retire. In 2010, we opened Louis Louis in that location. After a 15-year journey, we had our home,” says Kyle Petit, one of the owners.

With Louis senior and Louis junior in the family, the name Louis Louis made sense. “We know it’s rare to have a family that can work together so well.” We’re blessed, and my children are expressing an interest in carrying it on, that’s not something you hear about anymore, not in little towns like ours where most people just move away,” says Kyle.

On any given night you can find three generations of Petits with their hands in everything, including Louis senior. And it’s no accident everybody in the family knows how to run a kitchen.

Louis considers them the engine of a restaurant, a place where businesses fail or succeed. 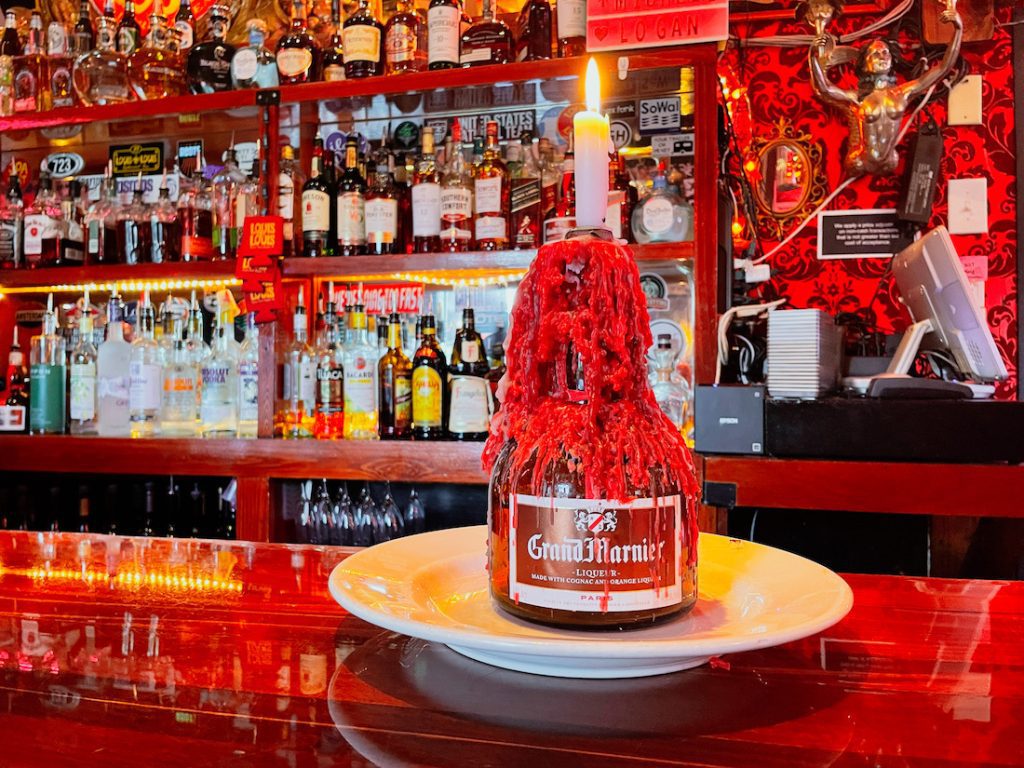 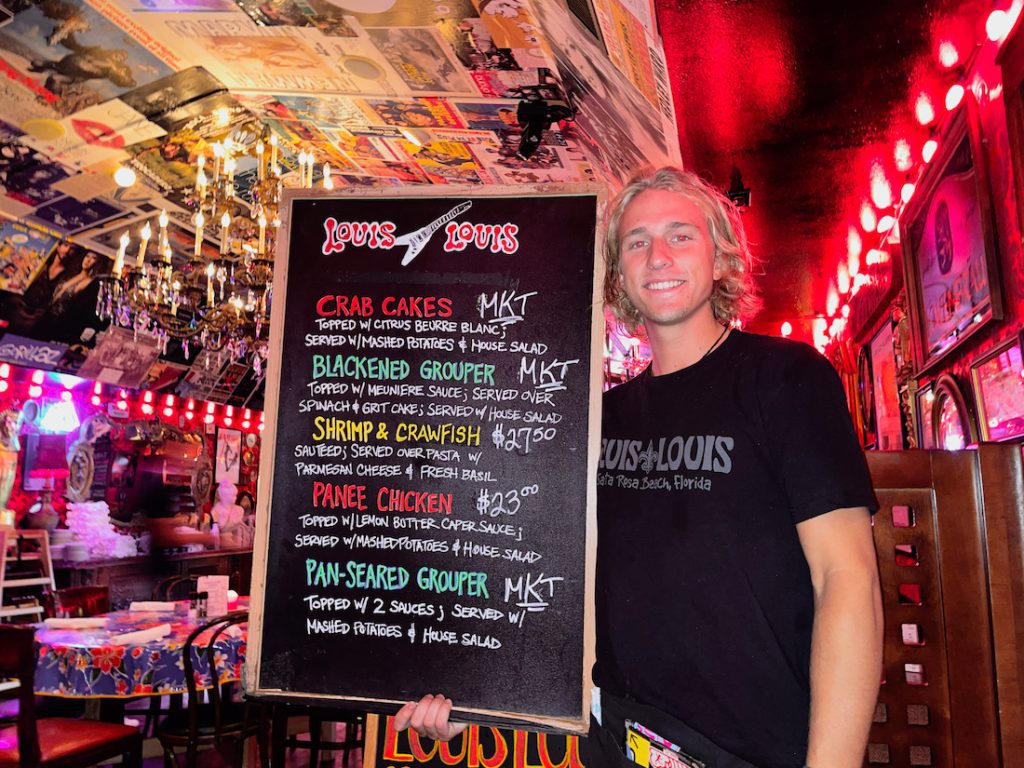 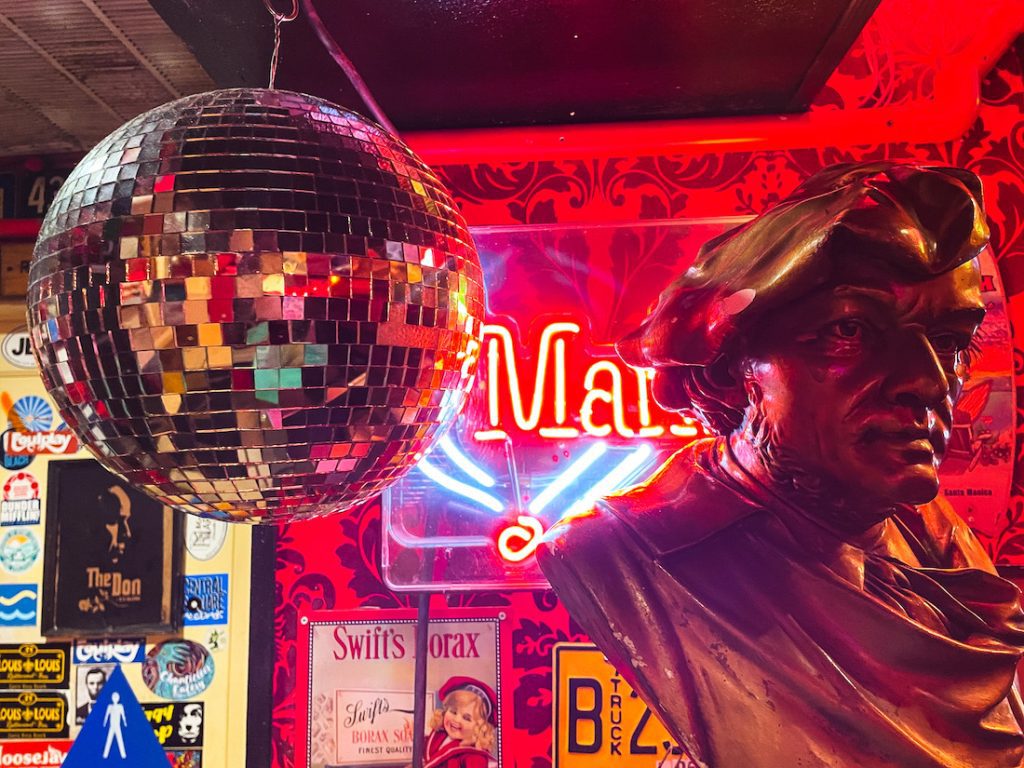 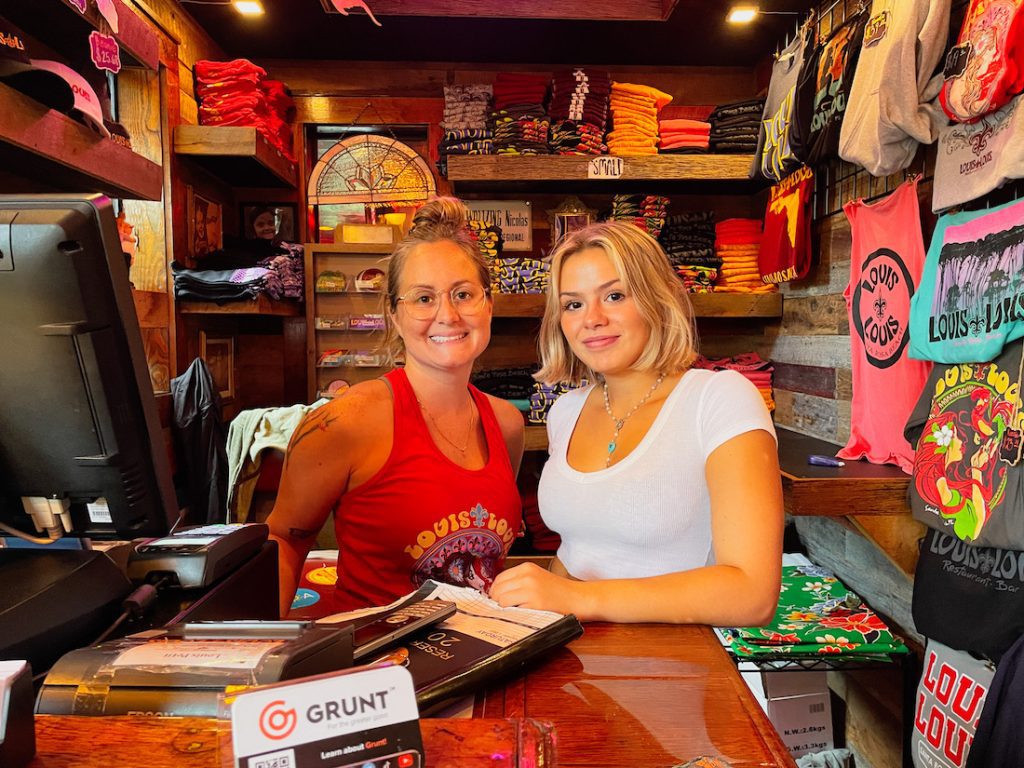 A recent Thursday night visit revealed what a hidden gem Louis Louis is. Parking is ample, and strolling into the entrance, the sounds of the Will Thompson Band filled the air, a perfect accompaniment to the hot summer night. Kyle elaborated, “Will plays every Thursday on the patio. It’s such a fun vibe, and he never plays the same set twice. His wife Lindsey has the voice of an angel; it’ll bring you to tears.”

The angelic melody followed us into the spacious-feeling dining room. Reminiscent of the Red Bar, it’s filled with chandeliers, red walls, candles, and lots of posters, including the original Lynda Carter Wonder Woman hanging beside the concert poster for ABBA. Red Christmas lights hang from walls, and vinyl floral tablecloths cover amply-spaced tables.

Payton (our server) stopped by our booth with the iconic chalkboard menu and a wide smile. He proudly told us about all the items on the board, and steered us toward his favorites. I’m one of those people who always orders the tuna dip. I’ve got to try everybody’s version. Louis Louis’s rivaled some of the best I’ve tasted—super smoky hunks of tuna layered with not too much mayo, and a slightly spicy backheat, served with seeded crackers, yum. 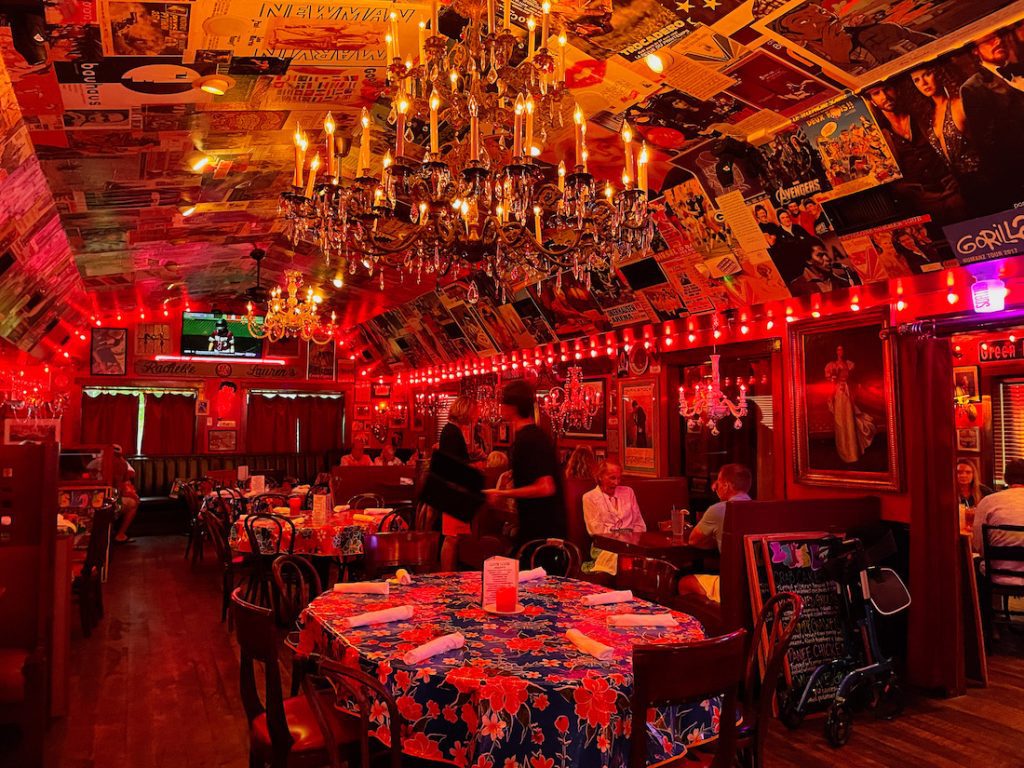 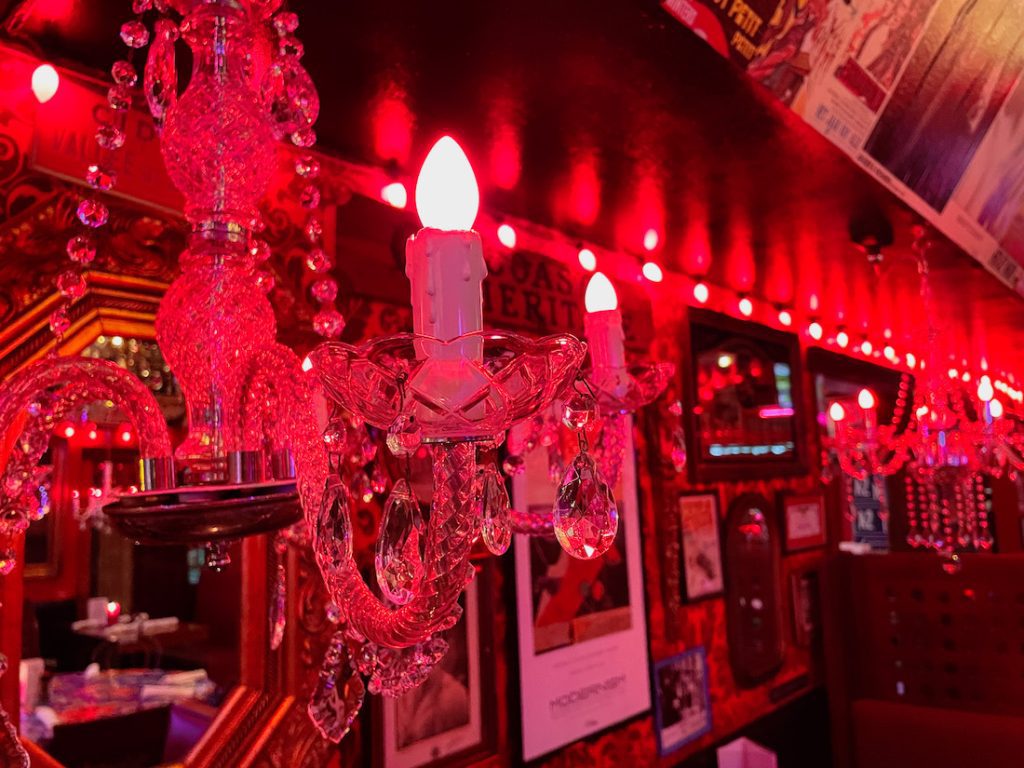 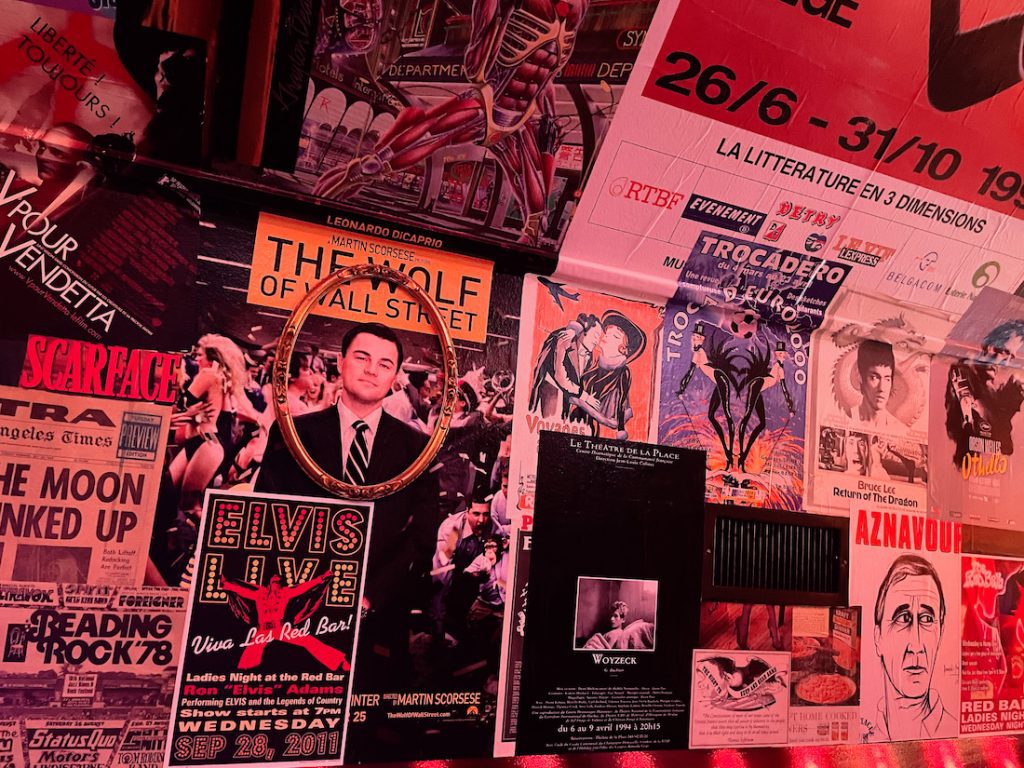 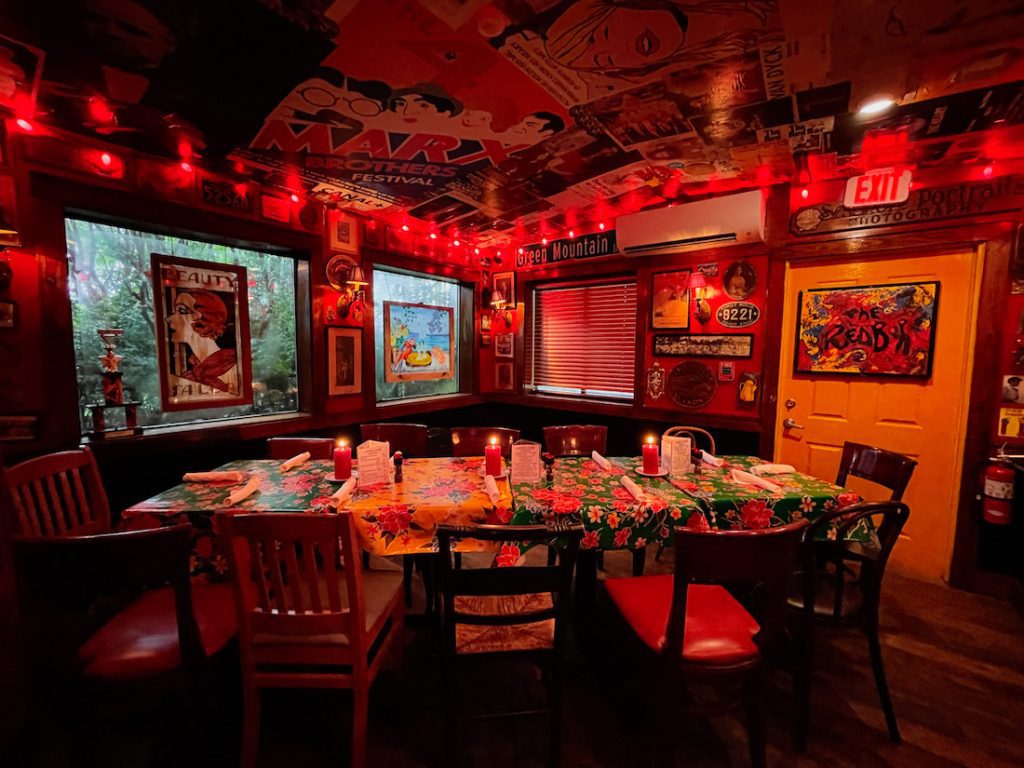 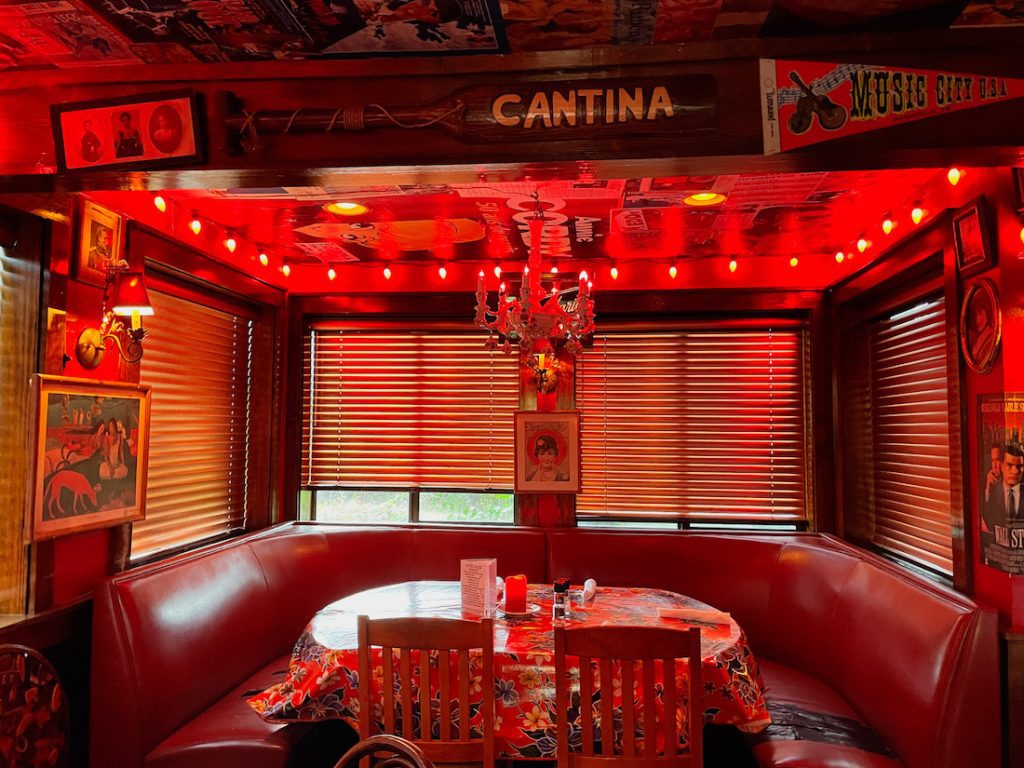 Be sure to ask for the Geaux Jus. It’s made by a local guy, kind of his riff on a pepper vinegar, and so good…with everything.

The crabcakes arrived with a great sear, a zesty lemon bearnaise, and no unneeded filler. And if you’ve never been to a Petit restaurant, just know your entree comes with a sizable salad plus starch in the form of either a grit cake or mashed potatoes. At Louis Louis you get a choice of salad dressing, but really there is no choice, always get the tomato vinaigrette.

If gluten is an issue Kyle has you covered. “Since I’m a chef with celiac, I’ve always offered options for people. We were one of the first places to have a printed gluten-free menu in the area.” 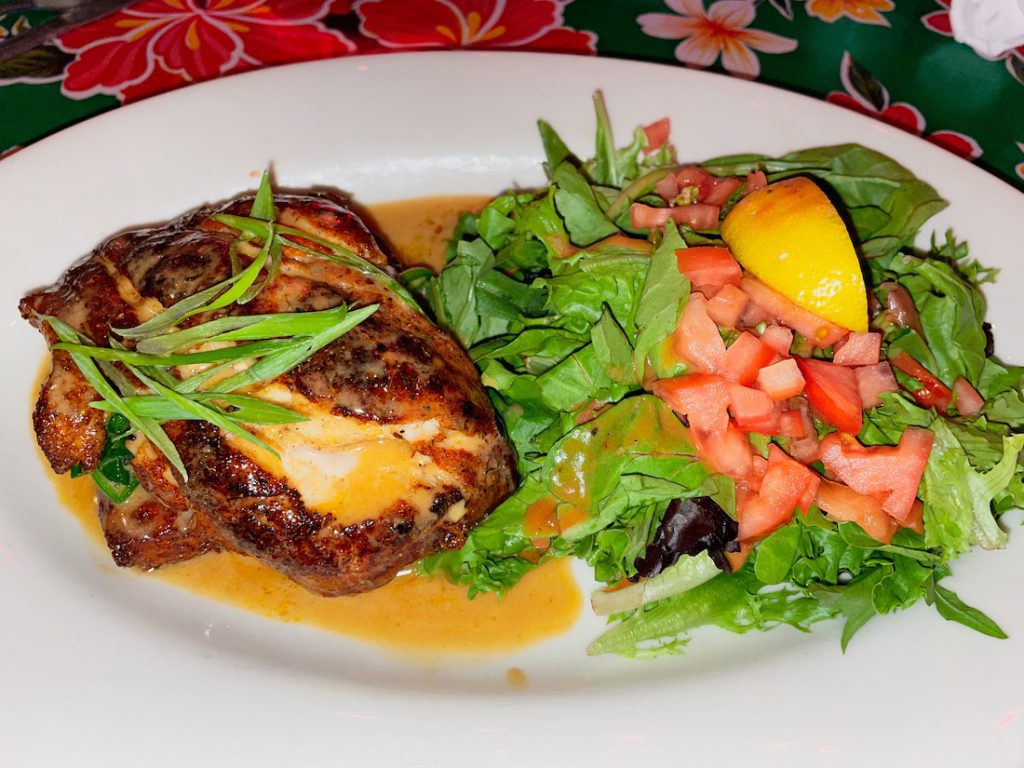 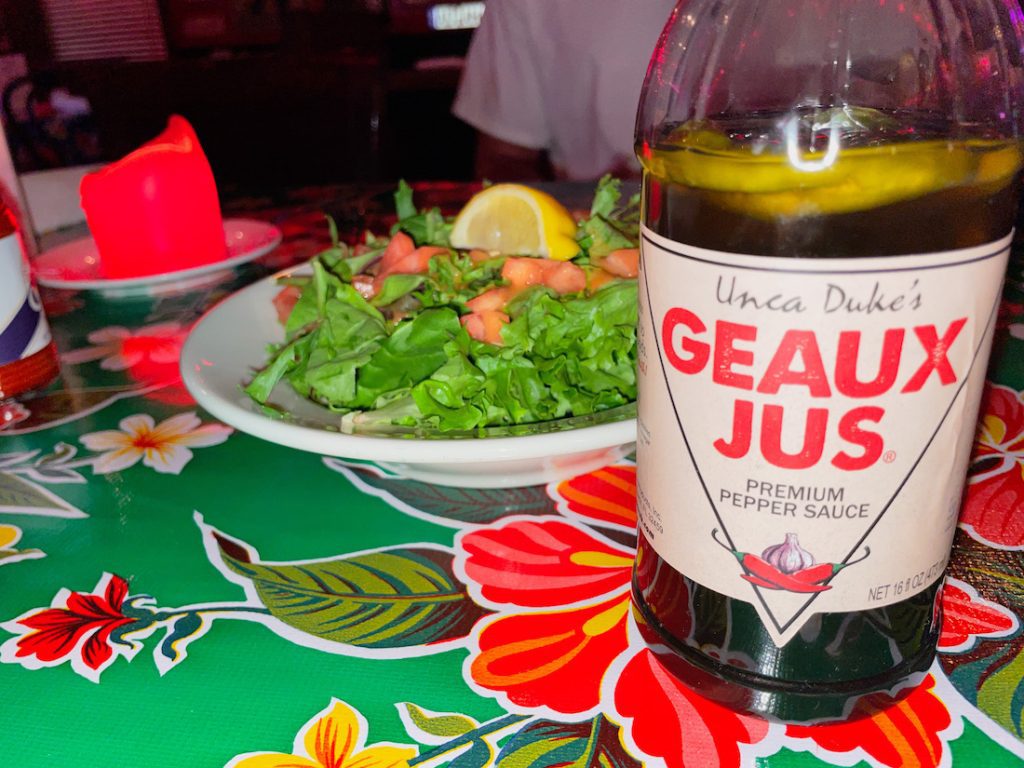 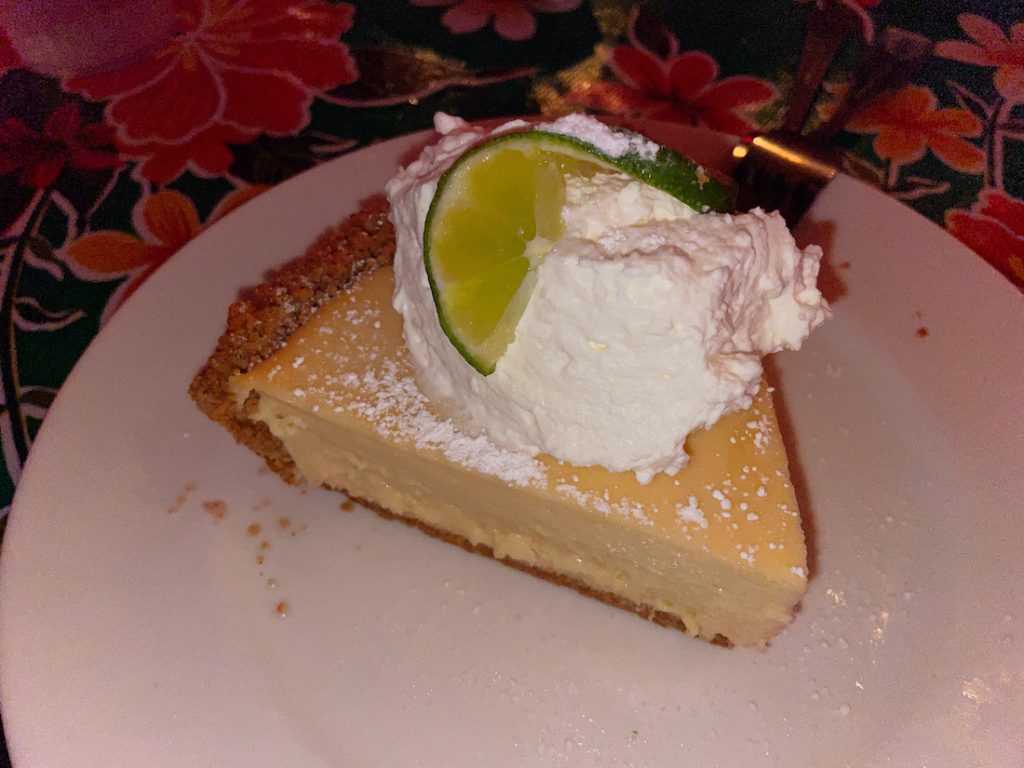 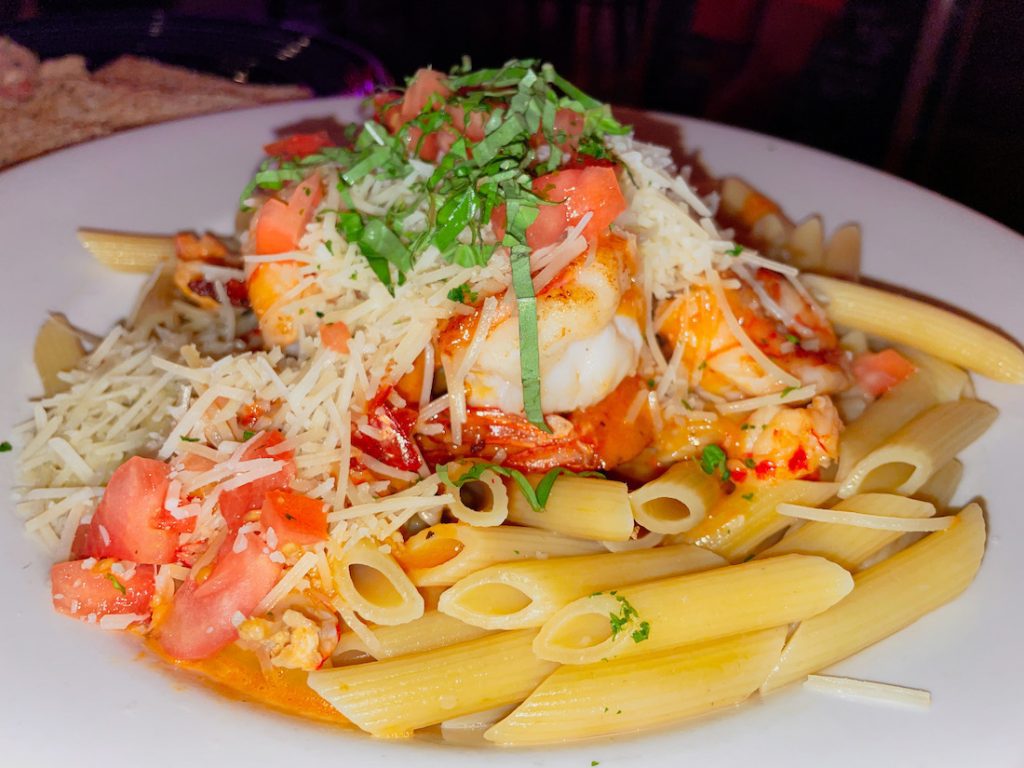 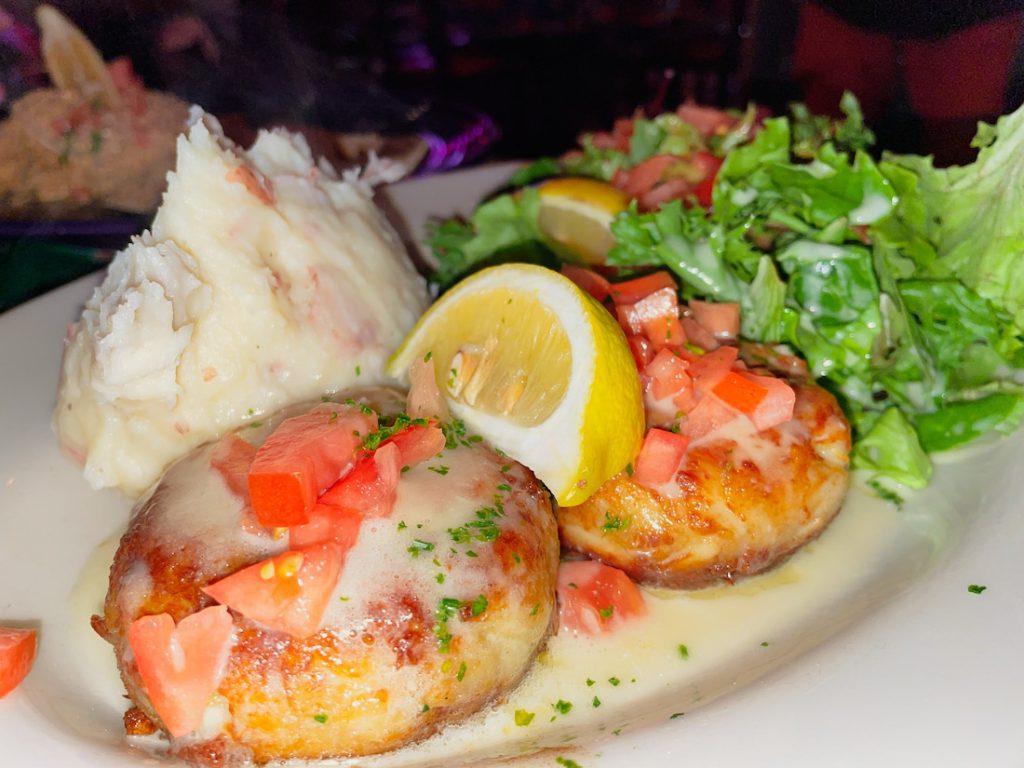 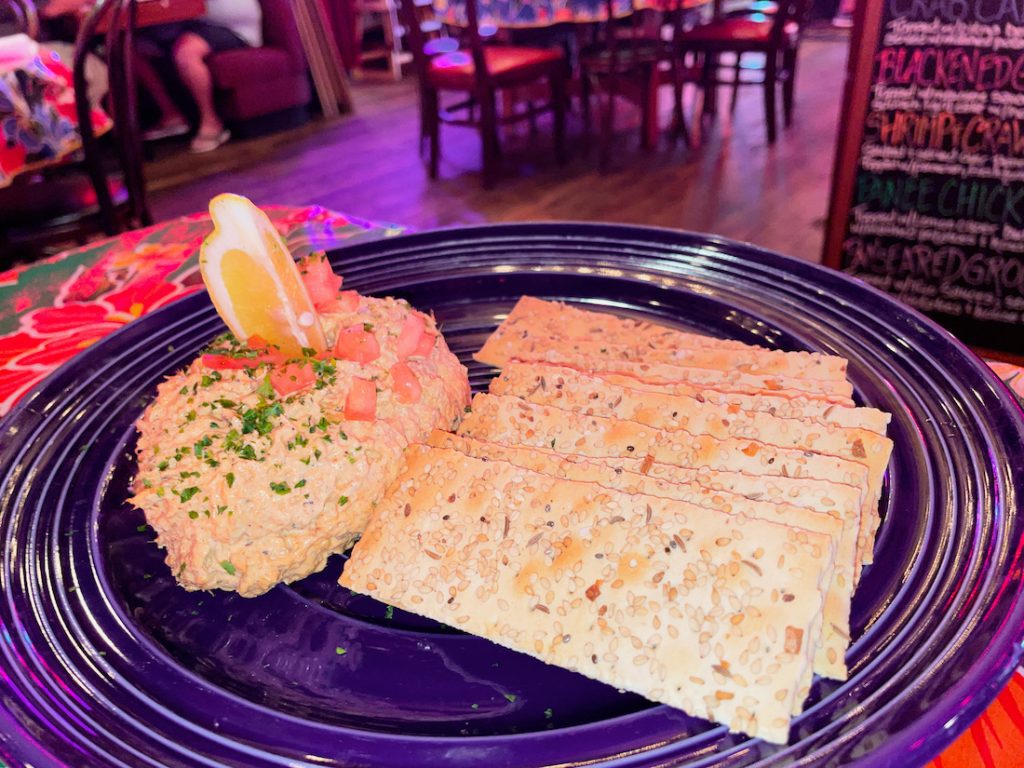 Another standout on the menu (besides the Blackened Grouper I adore), was Kyle’s go-to when she was pregnant with her children, the shrimp and crawfish pasta. “It started out as a child size, but by about month nine, I’d have a full bowl and a half. Nothing says comfort food to me like that dish.”

The menu features some recipes passed down through generations. The Panné Chicken comes from Oli’s grandmother. The marinara is his mother’s.

And that key lime pie? It’s inspired by a little woman in charge of pastry at a hotel in Mississippi Oli worked at. When she retired she taught him how to make it. Even if you’re full, get it to go—the simple, unadulterated, sweet-tart flavor makes a worthy late-night bite.