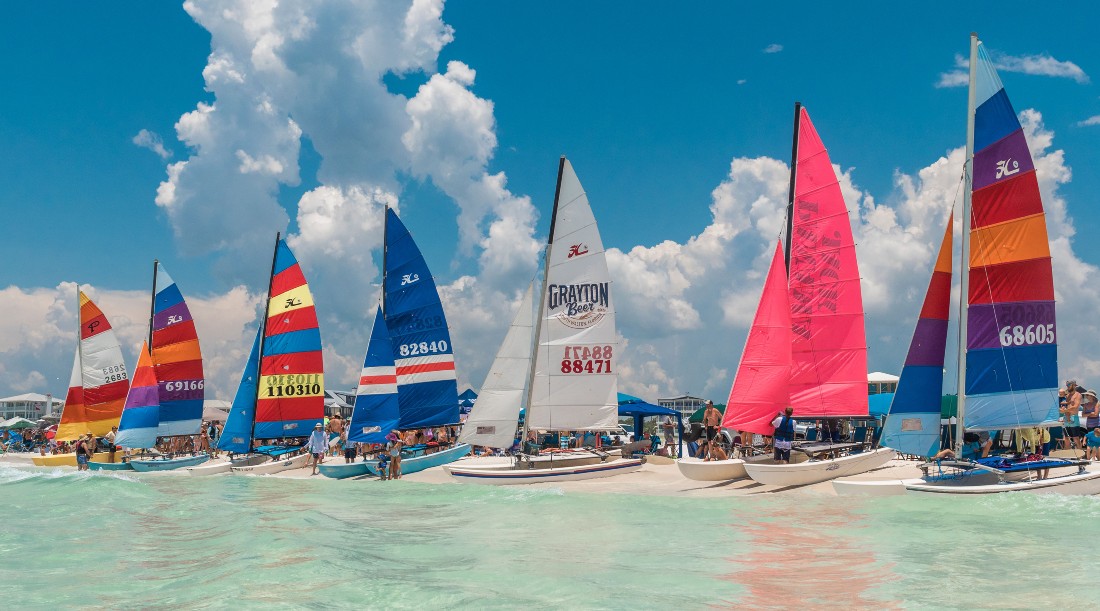 Hobie Cat sailboats at the Rags to Riches Regatta between Grayton Beach and Seagrove Beach. All photo credits are listed in the book.

If you’re at all familiar with Northwest Florida’s Gulf Coast, you’re likely already aware of just what and where the “Emerald Coast” is.  Author Robert Reynolds’ newest book, Pathway to Paradise on Florida’s Emerald Coast is a detailed editorial and pictorial about the area that stretches from Pensacola to Panama City Beach, including all the wonderful little beach havens such as Fort Walton Beach, Destin, Miramar Beach, Sandestin, and the unique beach communities that dot Scenic Highway 30-A.

Pathway to Paradise on Florida’s Emerald Coast details the history of what has become one of the country’s favorite coastal destinations while telling the story of one of its most recognized and well-known roads, Scenic Highway 30-A.

From its creation, by the State of Florida, way back in 1937, to its designation as a Florida Scenic Highway as recent as 2008, 30A has witnessed many of the milestones in the popularity and development of Florida’s Emerald Coast. Though the entire 30A area has become somewhat of an upscale symbol of the laid-back yet affluent coastal lifestyle, there was a time (well before there were over a million 30A decals plastered on back windows of family sedans and SUV’s across the country) when this scenic county road was adamantly opposed by developers because of fears of congestion. 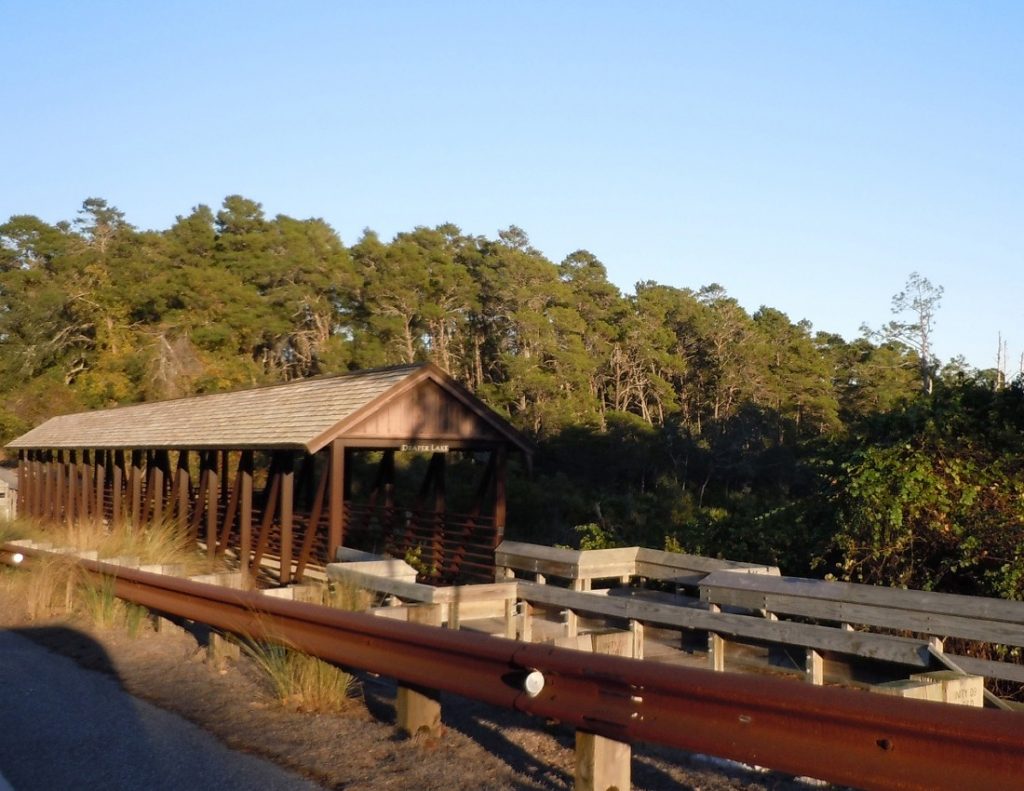 Covered bridge over Draper Lake on the bike and walking path known as the Timpoochee Trail. 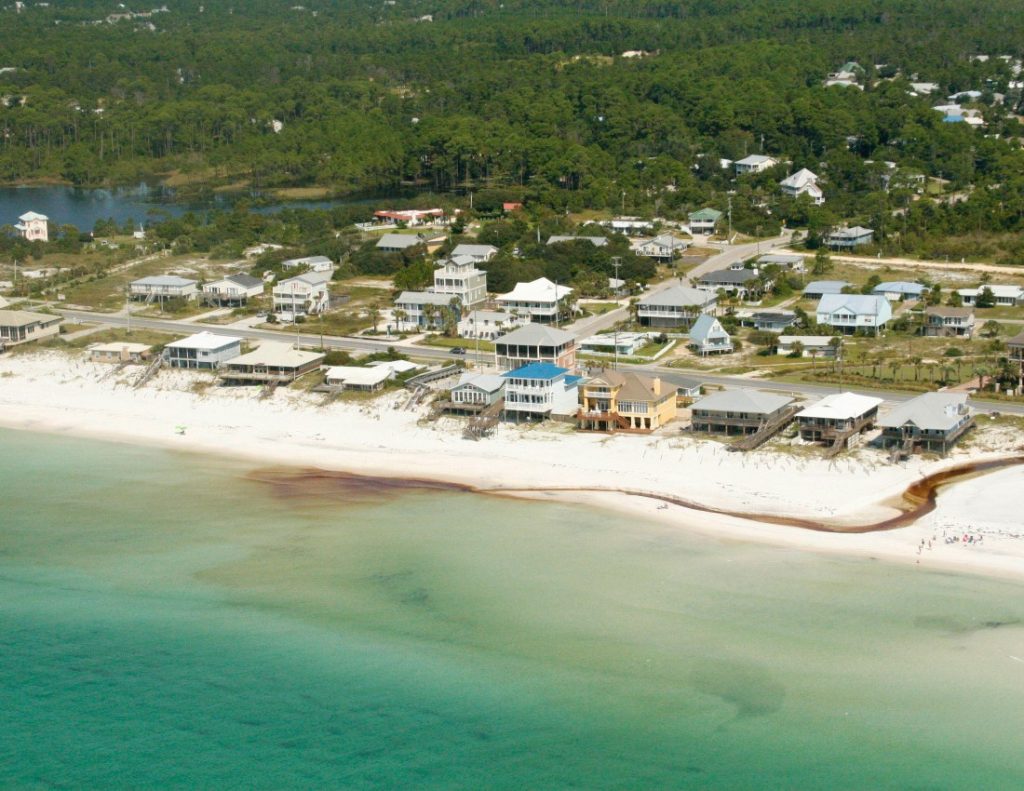 The east end of Lake Allen and the area of the Dune Allen Beach plat and First Addition. The Oyster Lake outfall is visible in the foreground. 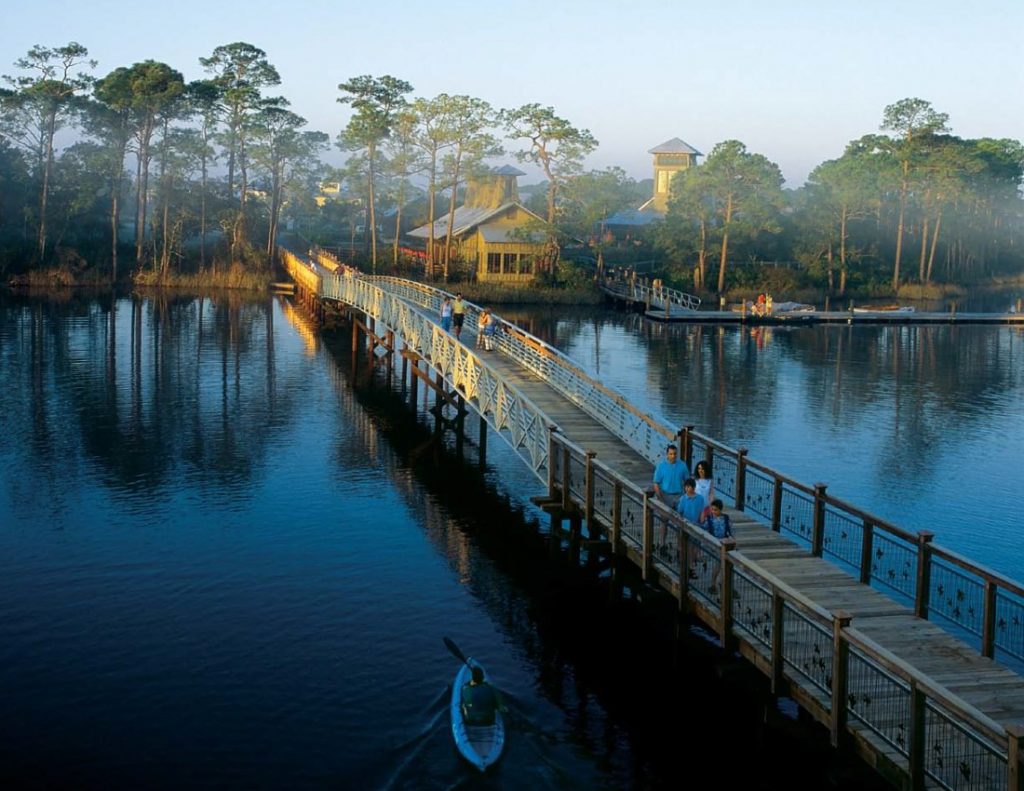 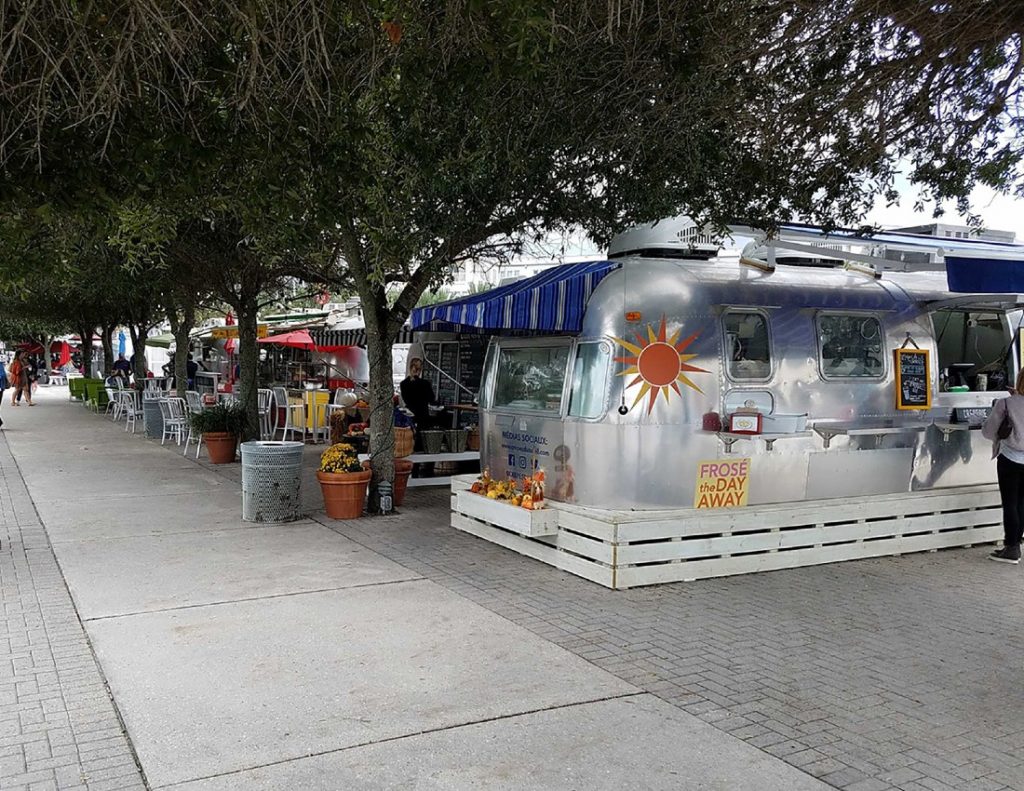 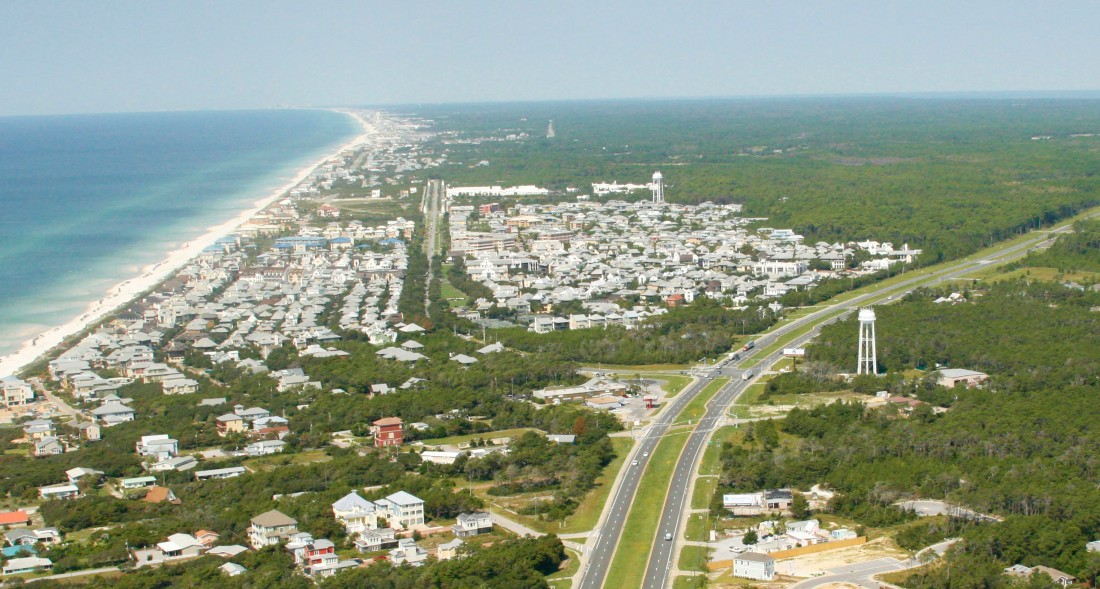 Aerial photo looking west showing the beginning of Scenic Highway 30A as described in the Florida Highway Department documents, with US Highway 98 on the right and Highway 30A at the center.

Jump ahead all these years, and Scenic Highway 30A has become a true pathway to paradise, connecting the array of magical and highly-desired beach communities along its way, making it possible for families from all across the country to get a taste of paradise.

Within the pages of this book, Reynolds tells the stories of family-built communities like Dune Allen Beach and Seagrove Beach to those of architect-designed masterpieces developed by big corporations, such as Watercolor and Rosemary Beach. The detailed descriptions and photos let the reader witness the creation of world-renowned new-urbanism designs, such as Seaside and Alys Beach. All of these being huge players in just what makes 30A, the area, not just the road, so unique.

Jeeps gathered for the Fourth of July at Seagrove Beach circa the 1980s. 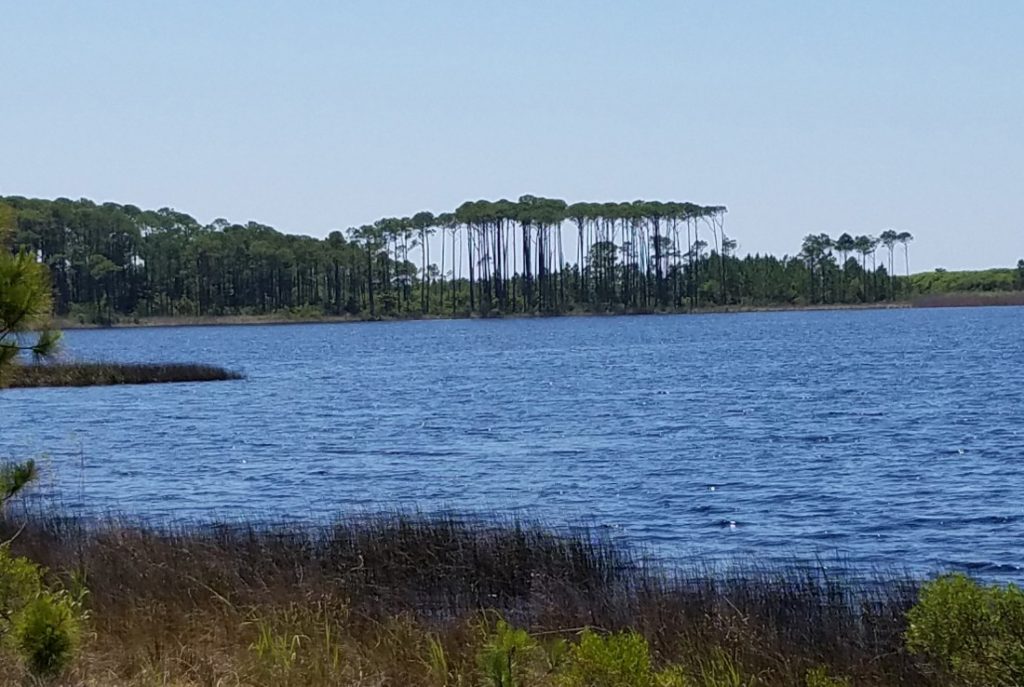 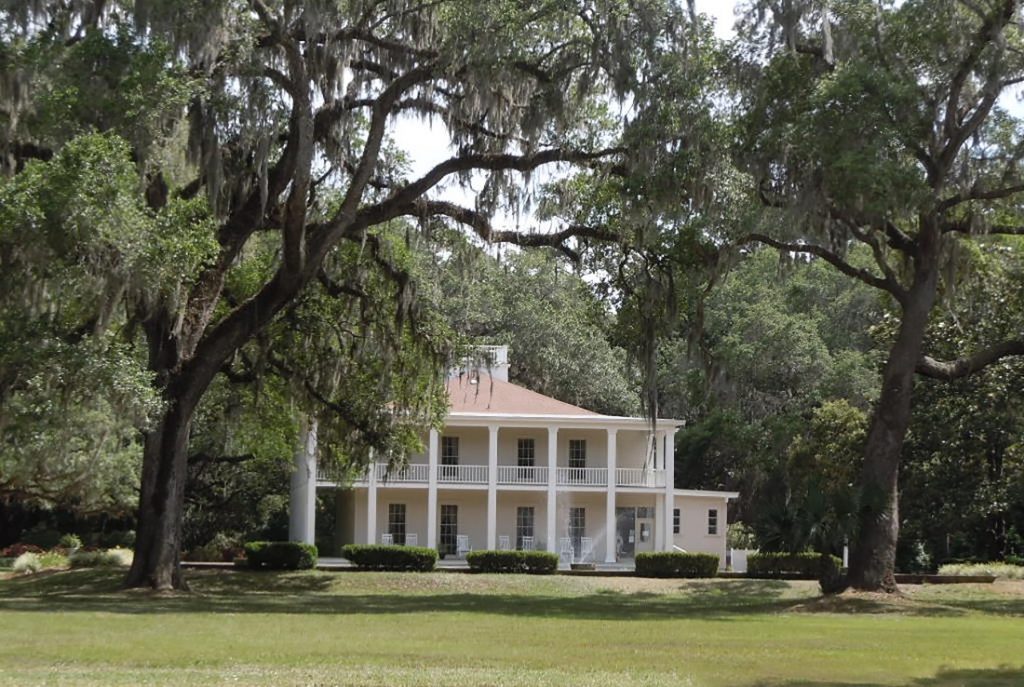 The Wesley mansion and grounds at Eden Gardens State Park.

Reynolds’ story also gives a clearer picture of the larger-than-life figures who spearheaded the developments over the past eight decades, from Chicago snake oil salesman Charles Cessna, who dreamed of an entire major city at Santa Rosa Beach, to Edward Ball, who bought Cessna’s property after the nascent empire collapsed, and went on to build what is now the mighty St. Joe Company into the largest private landowner in the entire state of Florida.

You’ll also read about family visionaries like J.J. and Robert E. Lee McCaskill and the development of Inlet Beach, as well as, C.H. McGee, Sr., and his son Cube, who were behind the birth of Seagrove Beach. Through the pages of Pathway to Paradise on Florida’s Emerald Coast, you’ll get an insider’s glimpse of the natural phenomena of the entire Emerald Coast, and just what makes it so special. From the Gulf, bays, and lakes to its crystal white quartz sand and dunes. You’ll even learn about many of the plants and animals that make up the ecological background of the area. 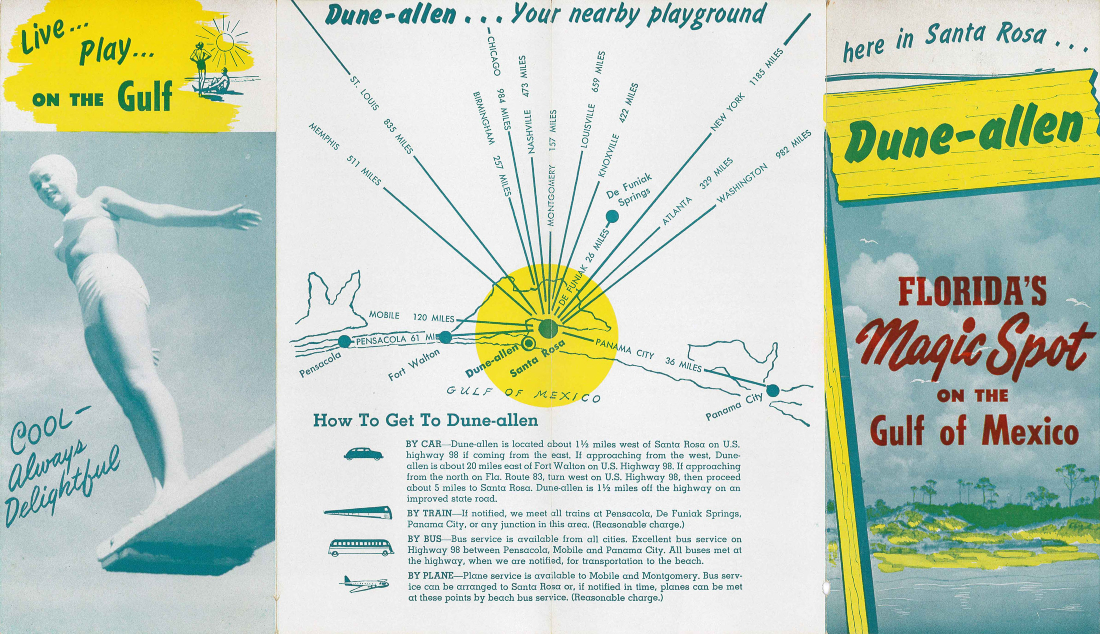 An early brochure advertising the amenities at Dune Allen. Airline service was only available to Mobile or Montgomery, but buses would be met at Highway 98. 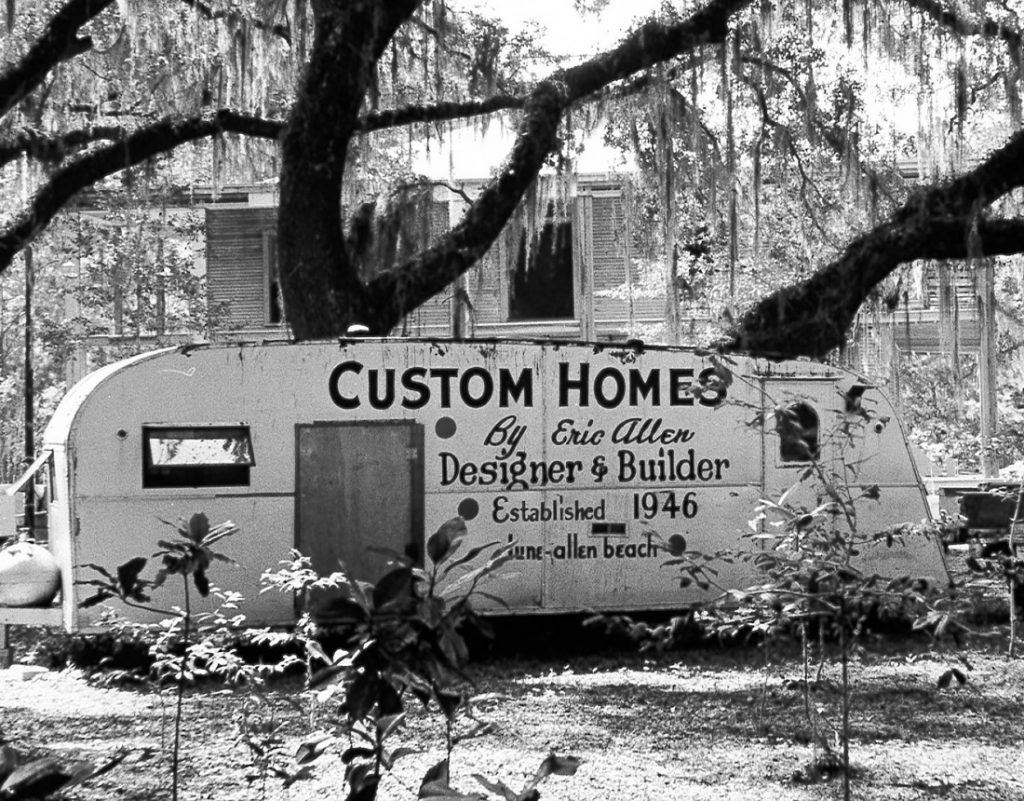 The trailer Eric Allen used as his office when he began building homes in Dune Allen Beach circa the early 1950s. 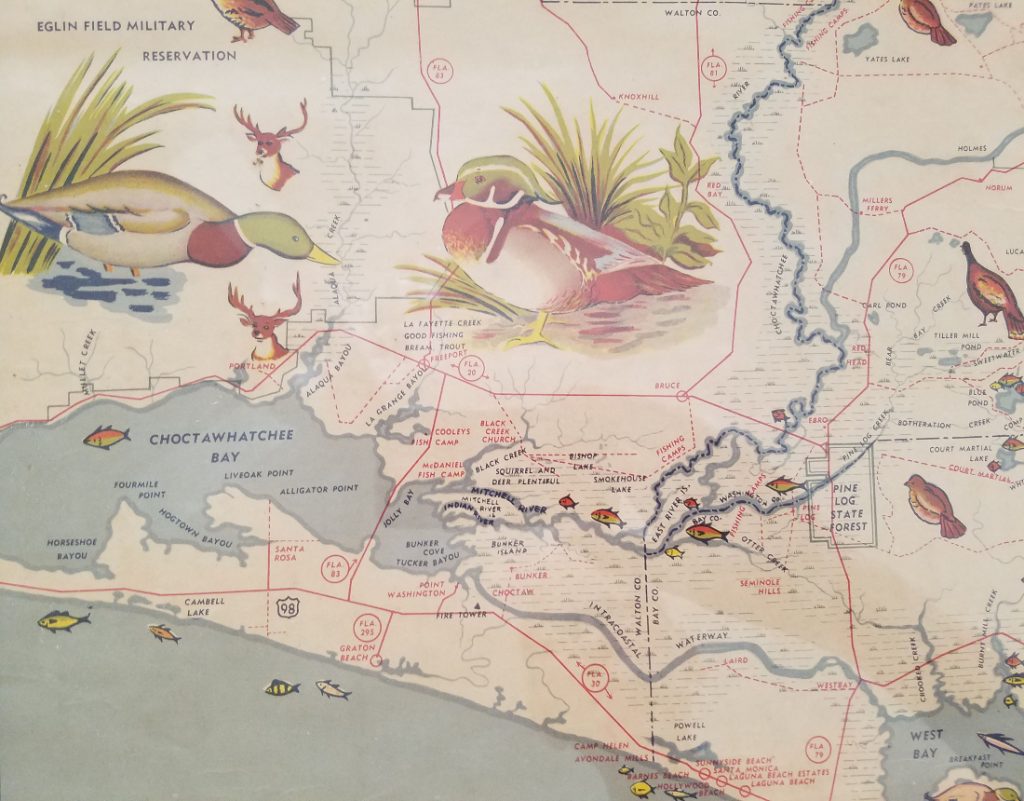 Along with some 150 photos of the 30A area, readers will also find a vast array of old maps showing the highway’s path over the decades.

The book also walks readers through the formation of the state parks and nature trails and landmarks along the road’s path.

When asked what makes his newest book unique from the many reads about the area, Reynolds said, “If I had to sum it up very briefly, I’d say the goal of the book was to give a better history of the Emerald Coast and all the communities within it, more than anything else available. But at the same time, I tried to capture the spirit and personality of all the communities too, including the activities, the natural beauty and landmarks, and the fun and excitement.” 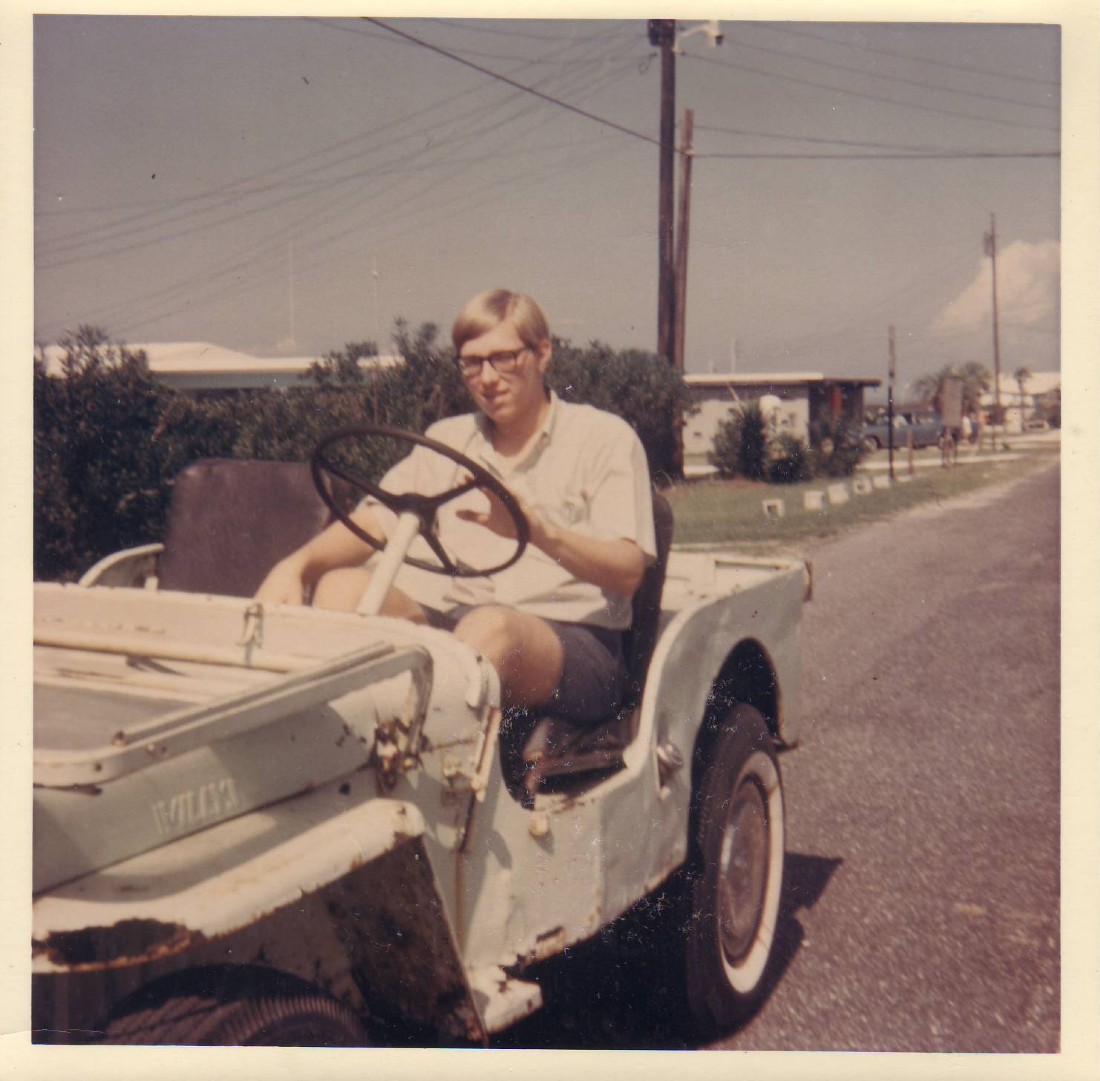 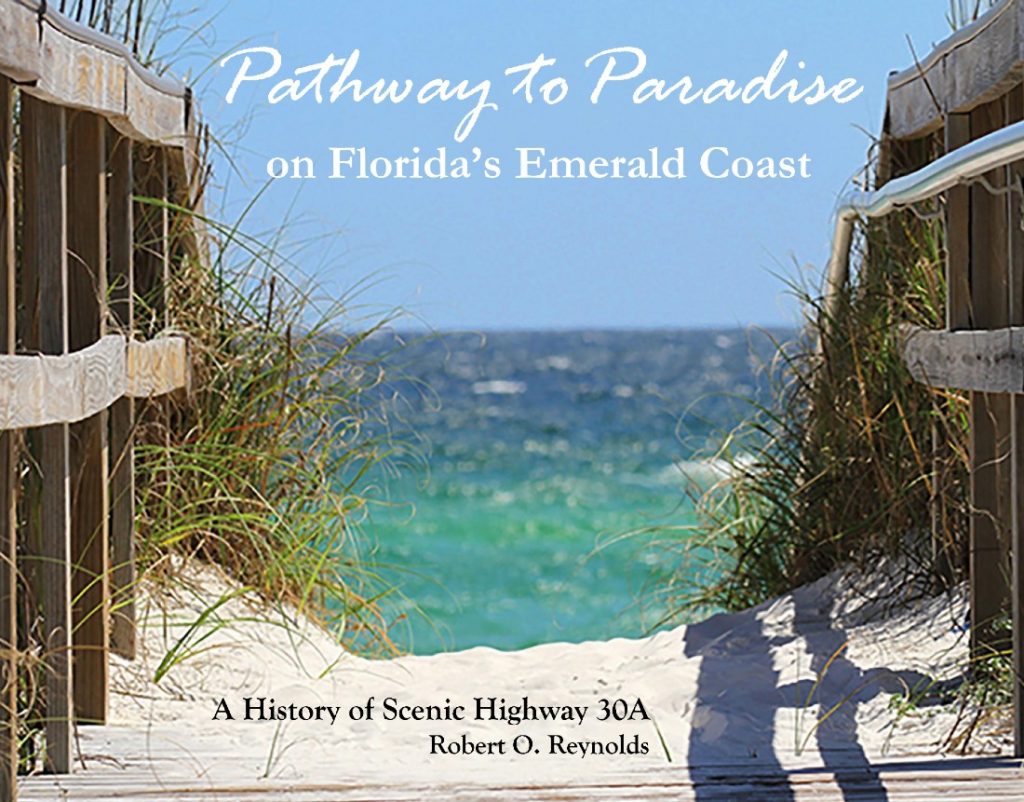 Pathway to Paradise on Florida’s Emerald Coast is available for purchase on Amazon and on emeraldwaterspress.com 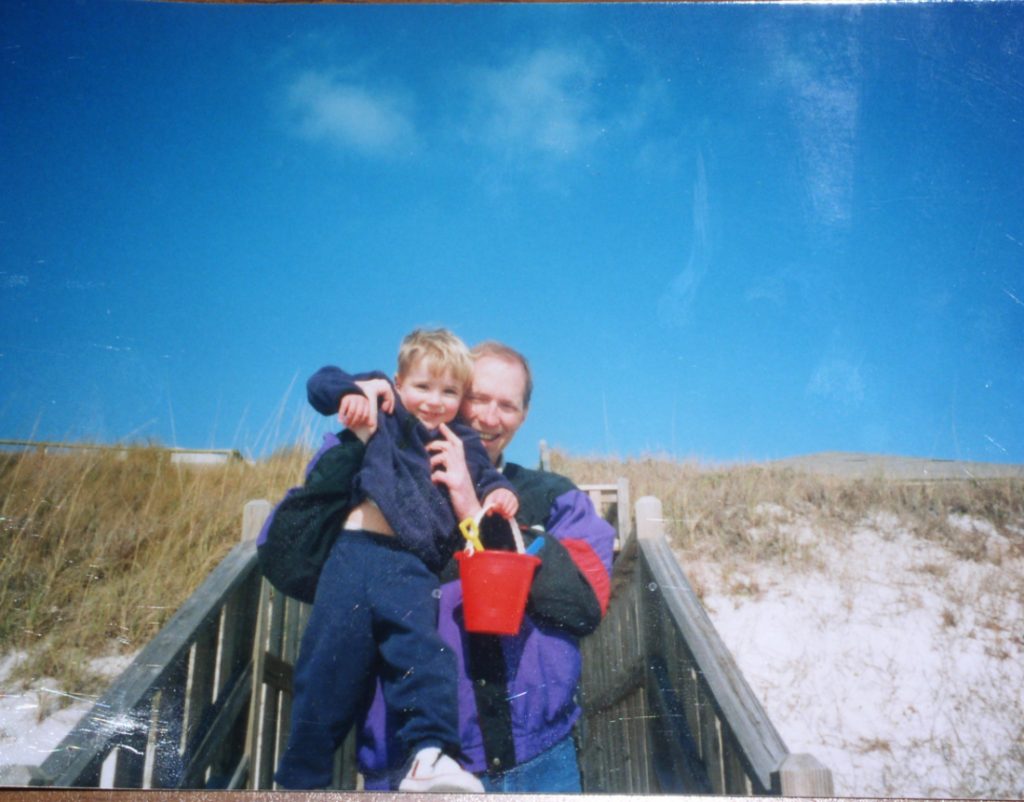 Author Robert Reynolds with his son at Seagrove Beach

This long-time writer and magazine publisher would have to agree that author Robert Reynolds has done just that. As a fan of the area myself, I’d highly suggest picking up your own copy of Pathway to Paradise on Florida’s Emerald Coast. I think you’ll enjoy both the in-depth and insightful information and the many photos that tell so much about the rich and changing history of the area. I know I did.

Click here to buy the book online. You can get in touch with Reynolds via email.