Watery Landscapes - A Photographer's Love of the Florida Springs - 30A 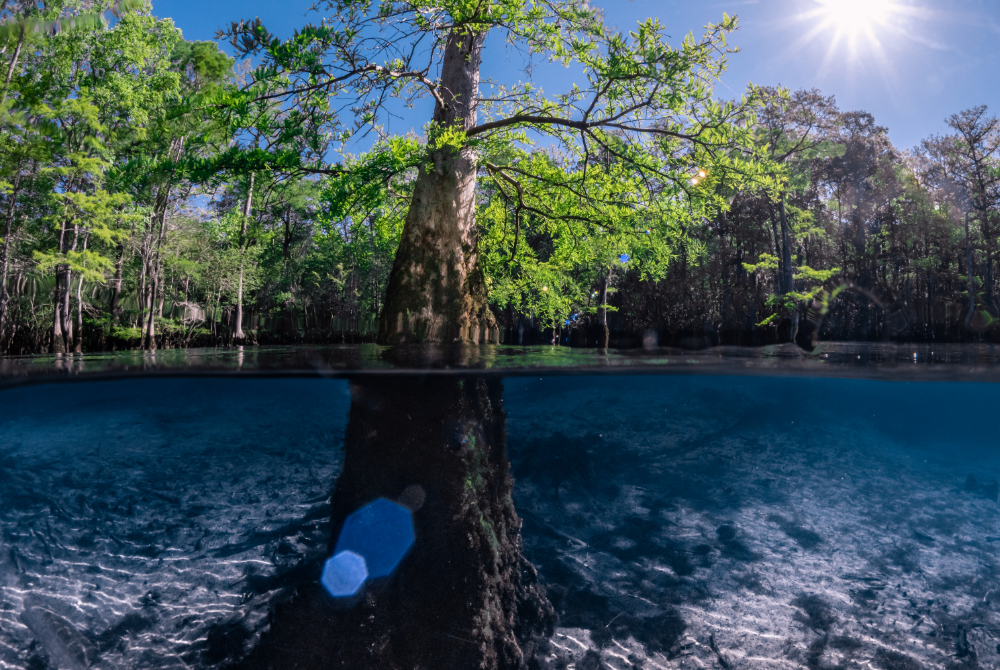 'Best of Both Worlds' - this Northwest Florida Spring is at the top of my list of favorites to shoot and dive. It's surrounded by pond Cypress trees, which really makes you feel secluded in the Jungle. - Trace Ingham

What do you think of on a hot summer day? The beach or a nice cool dip in a pool? Or maybe it’s that first delicious sip of cold water taken to cool down after some time in the sun. Many of us take that last one for granted. The majority of people in Northwest Florida might not be aware, but that clean, cool water sliding down their throats is not always that easy to come by. That precious, vital commodity is most likely provided by one of eleven natural springs in the area, otherwise known as “Floridian Aquifers”.

There are hundreds of natural springs across the state of Florida, and there is one man who understands their importance and beauty in a deeper way than most. The son of Fort Walton business owners, Trace Ingham is a native Floridian and self-proclaimed waterman. He is my friend, and I can vouch for his love of the water, both salt and fresh. The twenty-eight-year-old is a local photographer living and working in the 30A area. His first love was auto refinishing and metal fabrication, for which he received his education in Pennsylvania. Trace began shooting around this time, finding as he says, “even the broken-down hills of PA to be camera worthy.” 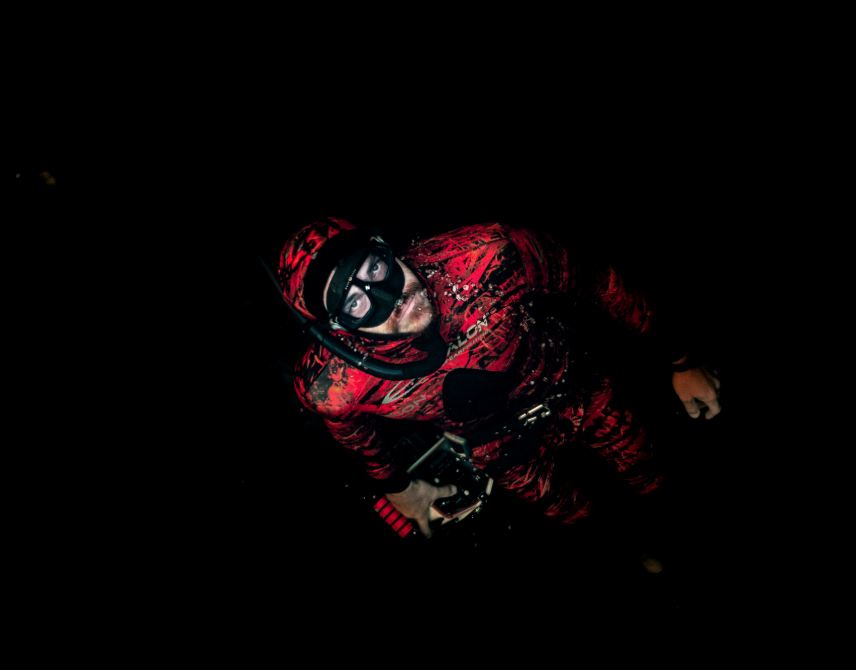 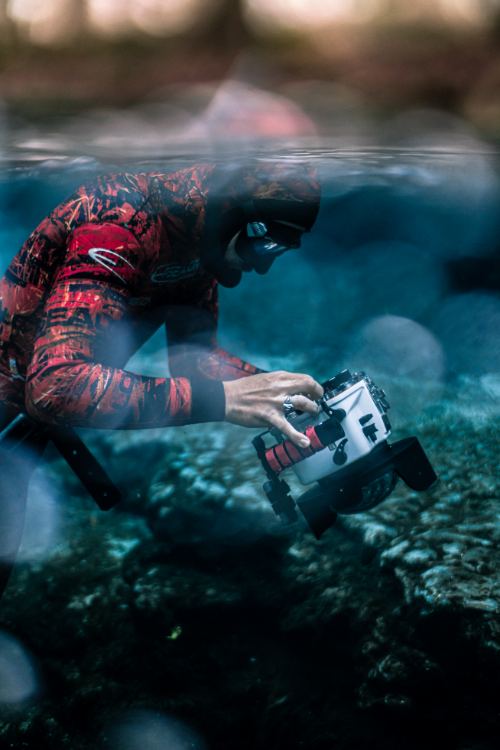 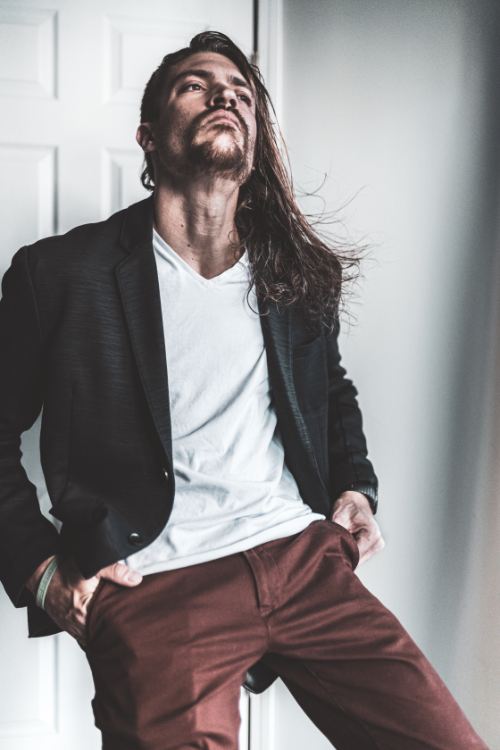 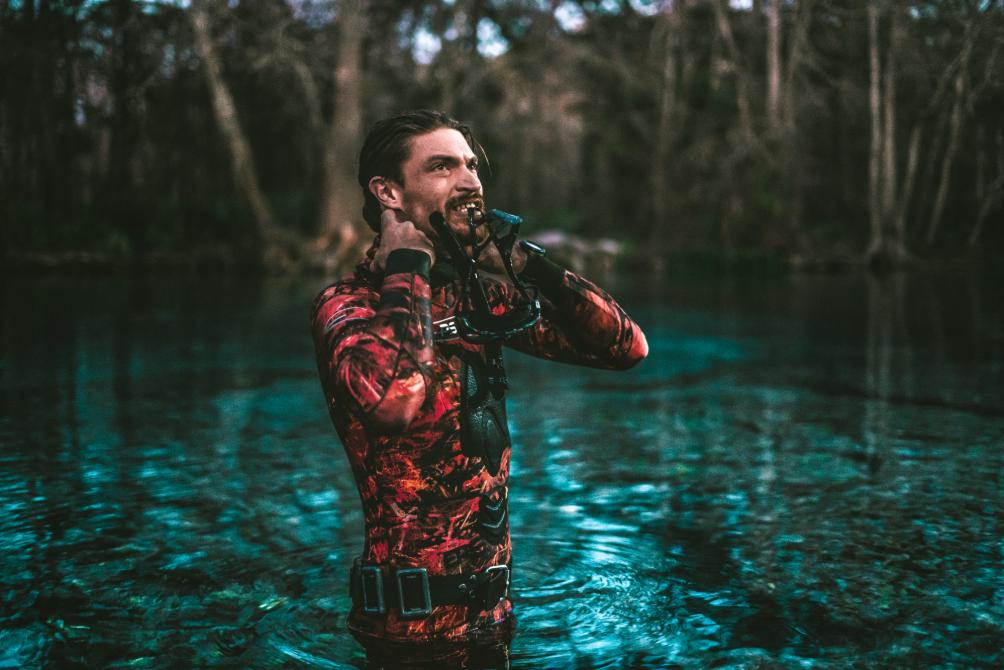 Trace Ingham – self-portraits. “Preparing for a night swim one of the most popular Spring System in Florida. to avoid crowds to get the clearest possible shots, we try to visit early or late in the day when most others aren’t swimming. Sometimes that means swimming in the dark.” – Trace Ingham

I met Trace a few years ago, connected through our mutual interest for night photography, in particular, the Milky Way. I can tell you that after spending time with him, I quickly learned of his natural talent. He has what we call “a natural eye” for seeing things uniquely, even more than most beautiful minds I know. This organic skill is topped only by his talent for capturing those things through his lens.

While others may work many years to render images that leave us breathless, Trace can scan a scene, meter the mood and light in his head, and produce a shot that stuns the eye.

I’ve watched him do it, and the result is sometimes magical. While Trace’s captures of our night skies are a beauty in themselves, it is his more recent underwater photographic offerings of Florida’s springs that are a true sight to behold. 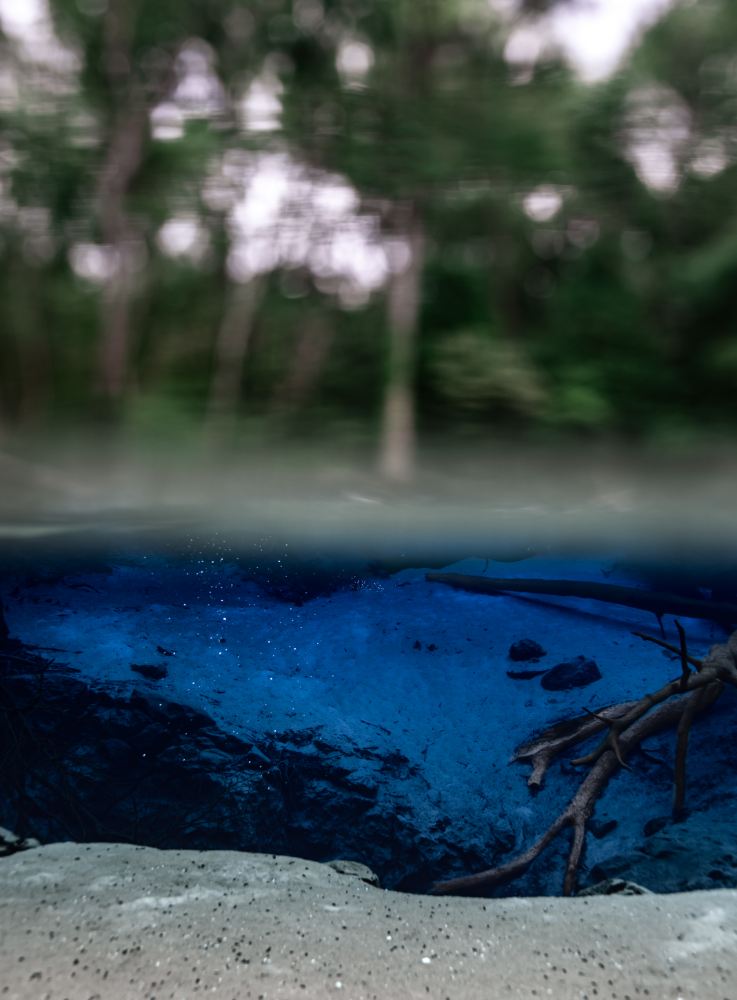 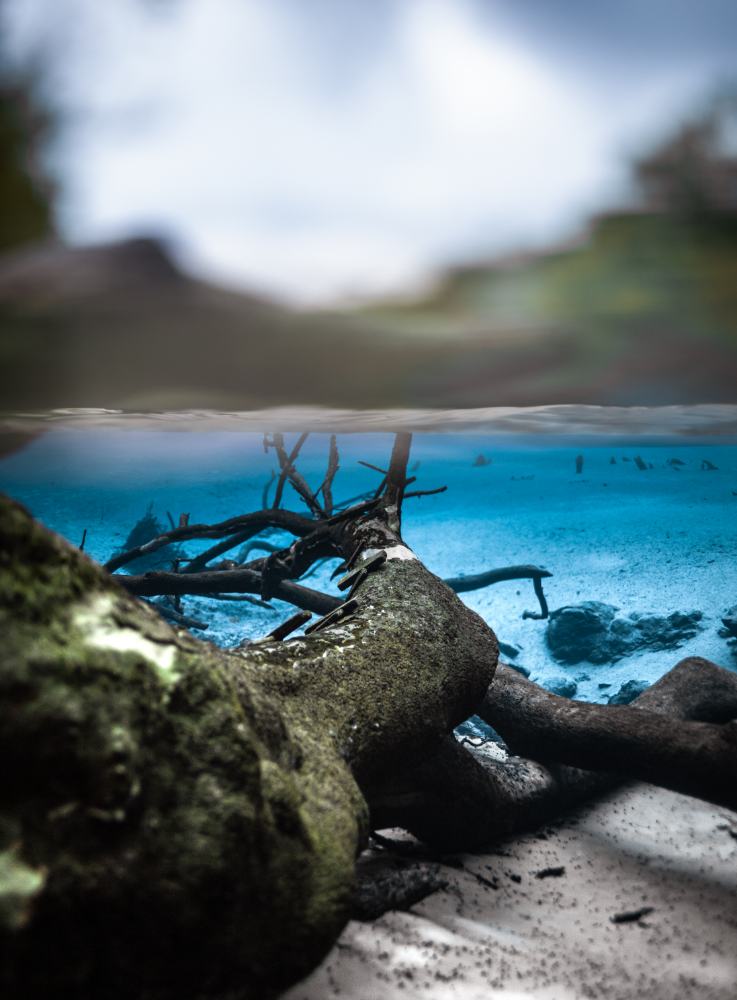 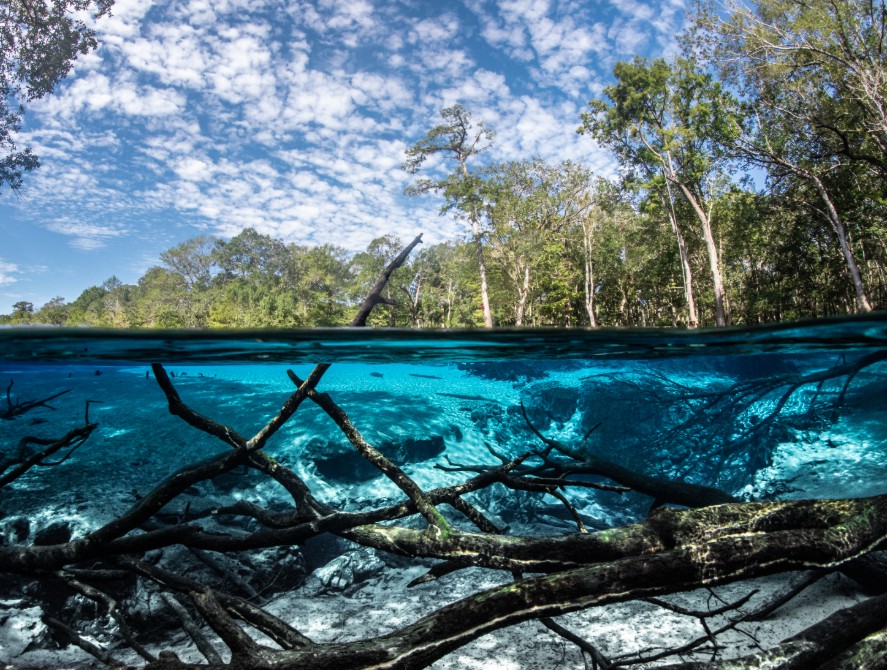 Trace works full time in addition to feeding his water addiction, so he appreciates the time he does have to visit and photograph the springs. Whatever the day’s conditions bring, he uses the light to connect the sun and sky to the different hues of greens and blues, creating fascinating vistas of the pristine springs.

Floating gently, quietly on the surface, and always finning with care, he dives down to capture the many different species of fish and underwater life. 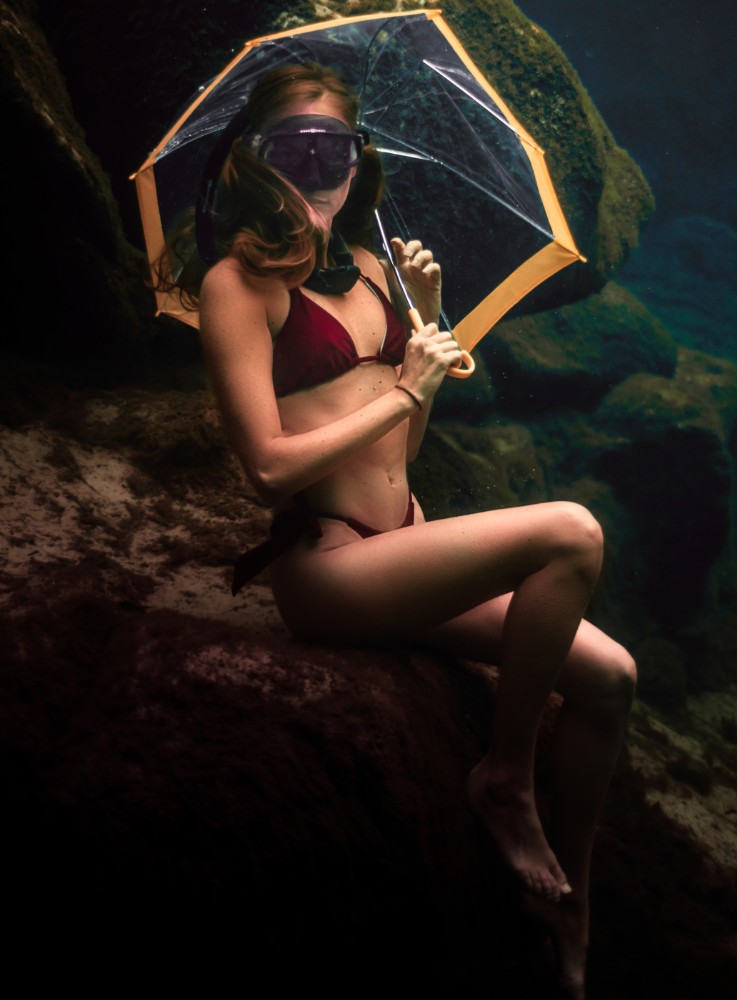 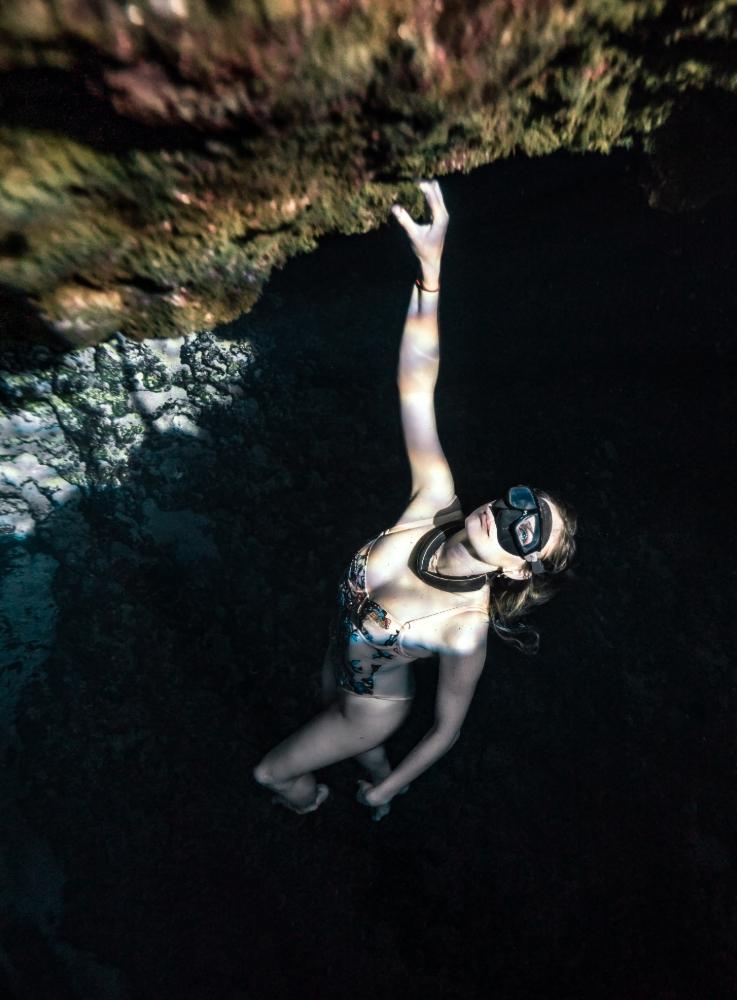 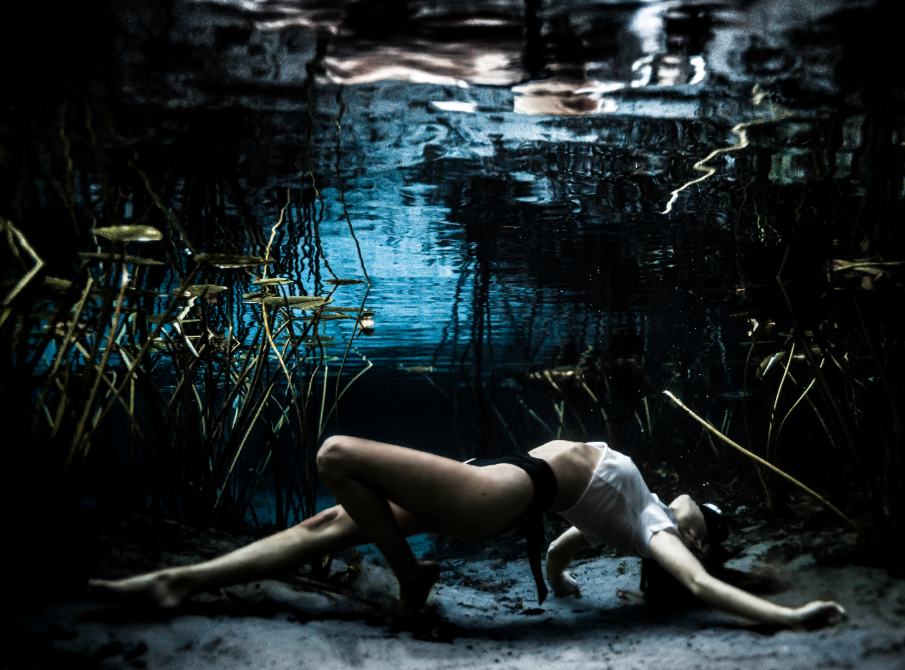 “Under-water Dance – Ashleigh Baird is a 75-meter diver and can hold her breath for unbelievable amounts of time. Making these artsy flowy shots easier than ever. But still never easy!” – Trace Ingham

This includes his partner, free diver Ashleigh Baird, pictured here in some of his work. Her beauty, her natural ability to move in the water, combined with Trace’s skill leaves the viewer with elegant and hypnotic underwater imagery.

“Florida is mostly known for its emerald gulf water,” he tells me, “but the best water is in the opposite direction.” He says it’s primarily the crystal clear waters that draw him there, but he feels a deep connection to the flora and fauna held in and around the springs.

The bio-diversity of all Florida’s springs encompasses hundreds of species and breeds of fish, birds, reptiles, invertebrates, mammals, and plants, including the rare Bald Cypress Tree. 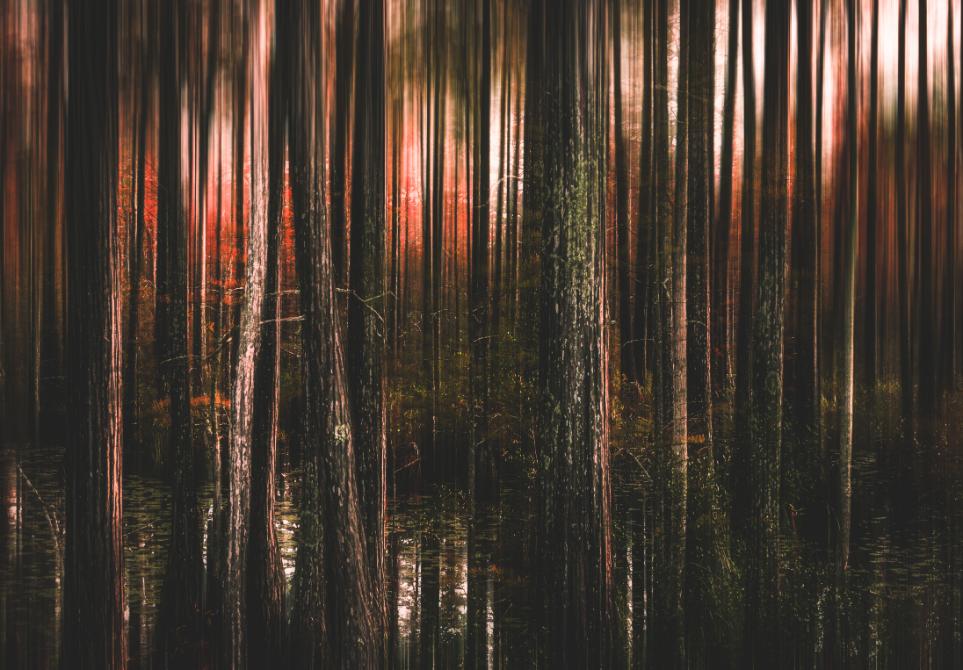 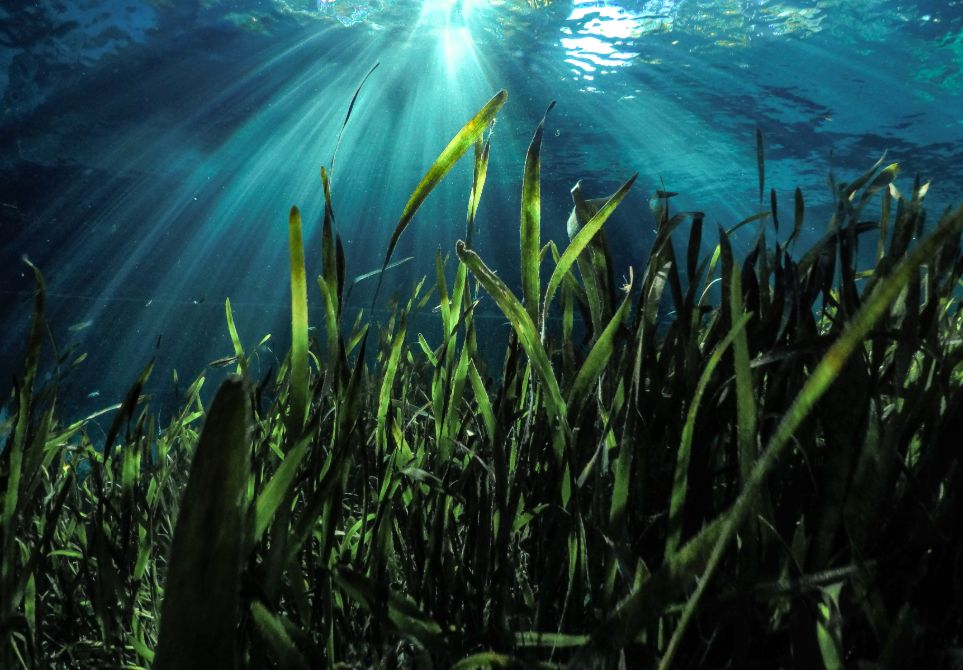 Trace is part of a group of Springs enthusiasts who are not only interested in photographing their striking beauty but more importantly preserving it. I recently spoke with Trace about his concern for how much attention the springs have received from the tourism industry in recent years. He feels that social media has played the role of a double-edged sword by divulging the exact locations of some of these springs. Trace says, “I love people coming from all over to see our amazing swimming holes or fountains of youth, but it’s important to respect the ecosystem.” He wants people to know that the springs have taken a downward turn in health in recent years due to everything from agriculture, too much foot traffic to pollution, and over withdrawals for drinking water. “Thousands of uninformed people wading improperly through the beds of lush greens can and will take its toll on these watery landscapes.”

Through sharing his photography, and passing as much information as he can to the public, he hopes that when people visit these springs they will be thoughtful of the fragile ecosystem in which they immerse themselves. He wants to remind people to enjoy themselves responsibly by finning carefully, not harassing marine life, limiting their time in the water, and bringing their trash out with them when they leave. It is the habit of all springs advocates when posting on social media to leave off the exact location of their snapshots in hopes to protect the location. As a professional photographer, Trace Ingham is no different. 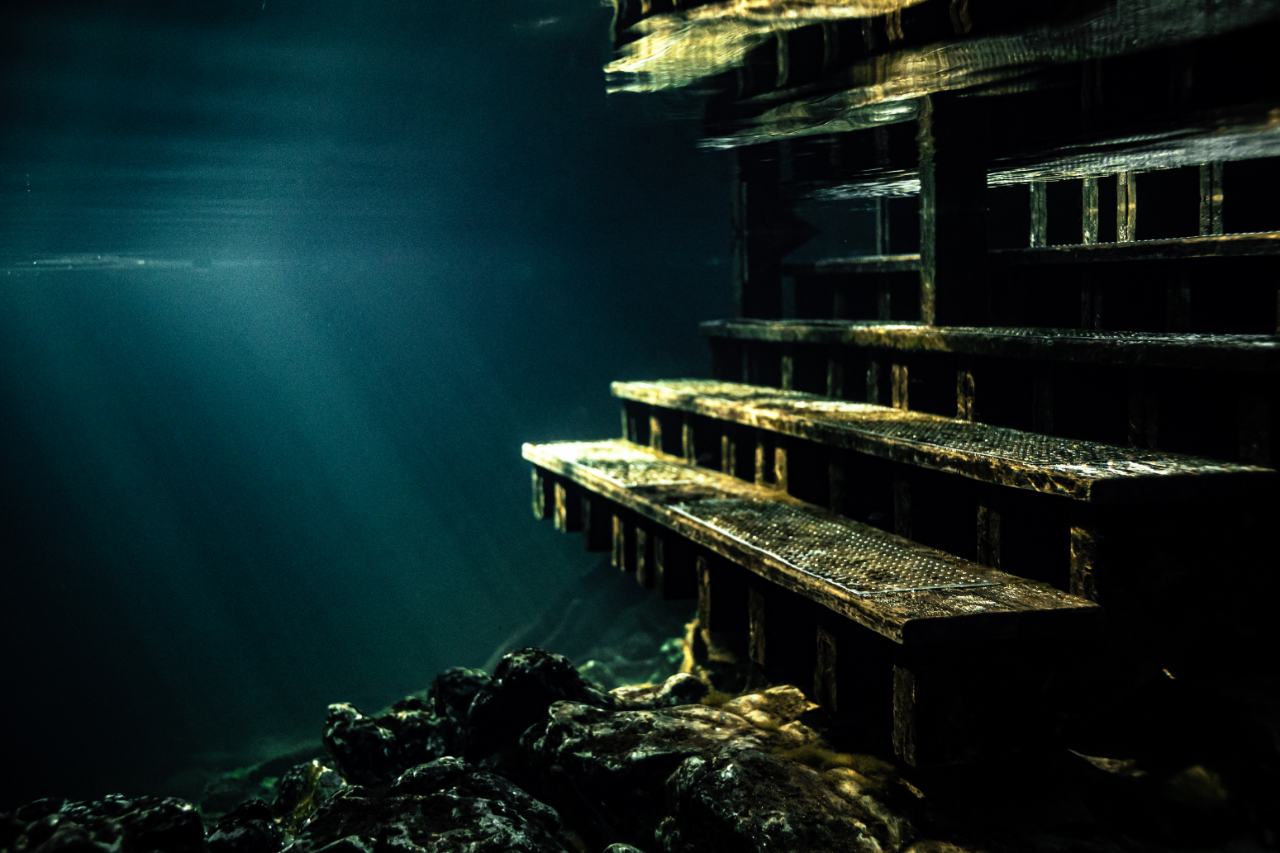 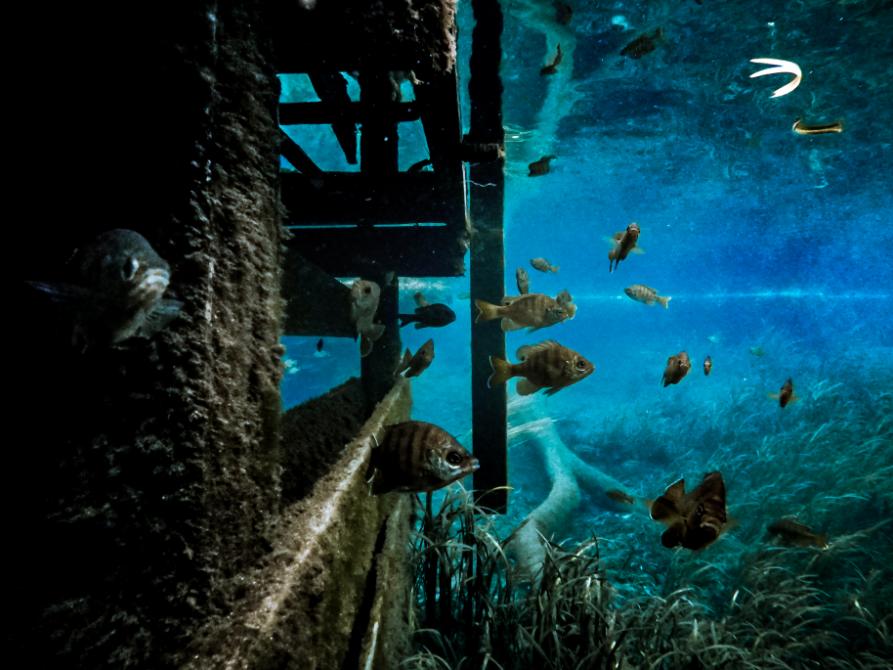 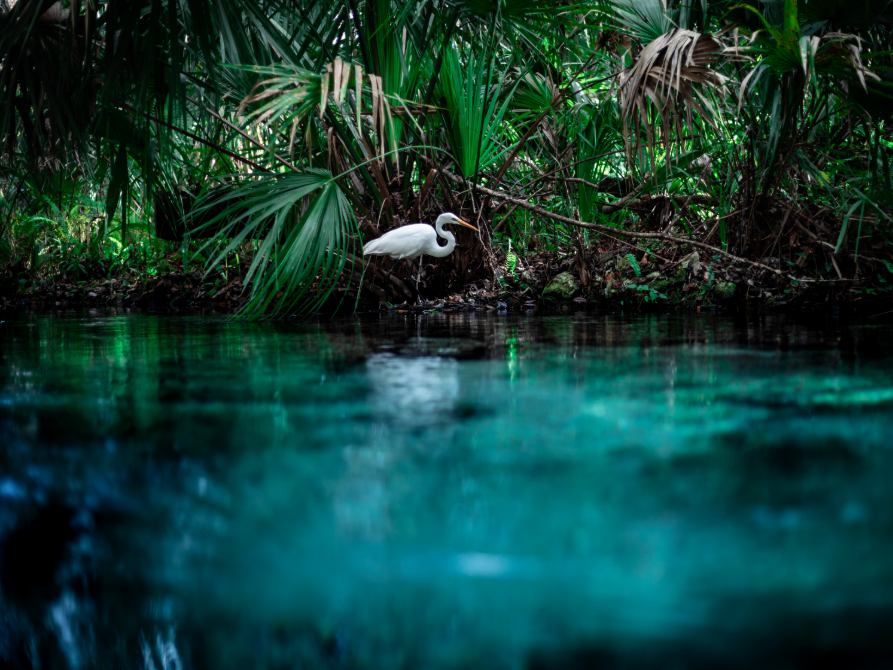 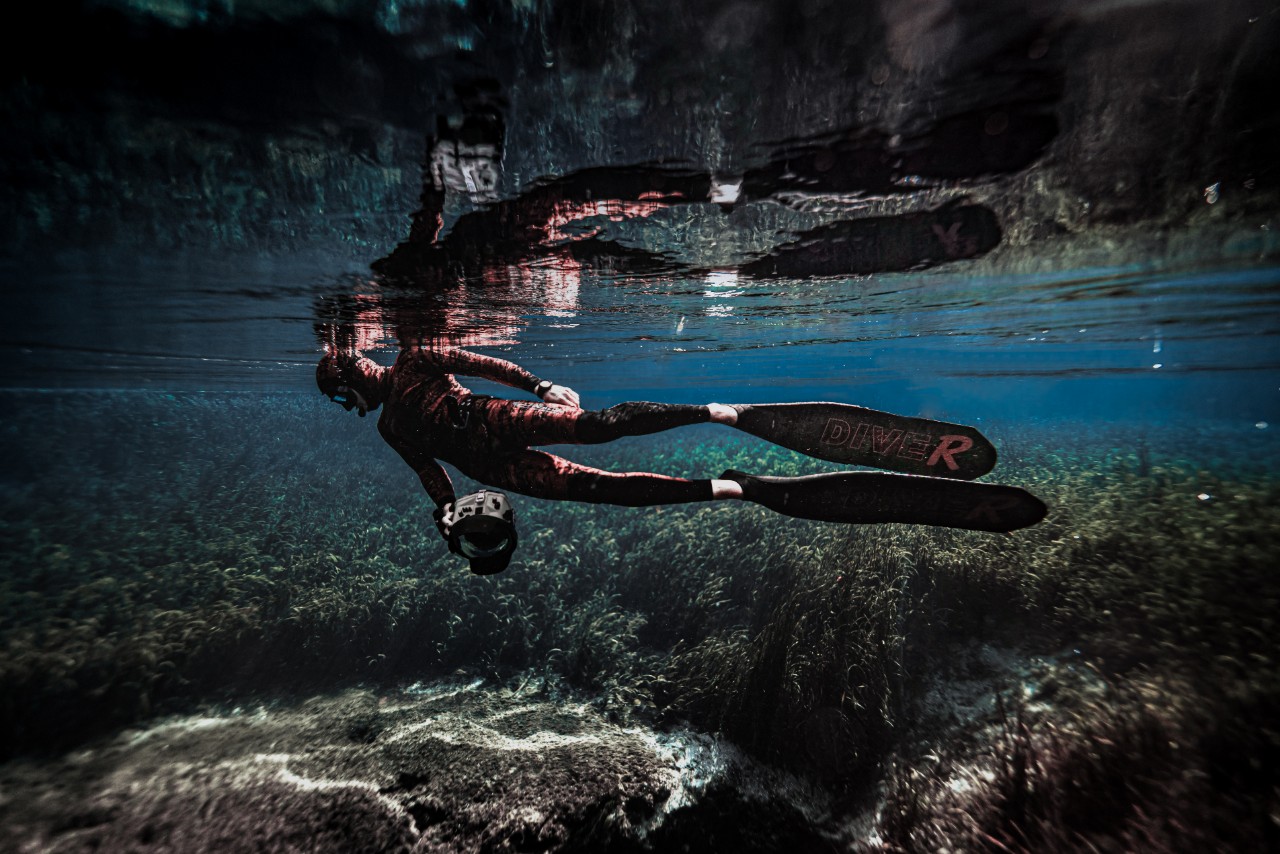 “Photo of me, Looking down 40 feet into a popular cave system of north Florida by Ashleigh Baird.” – Trace Ingham

If you would like to learn more about how you can help preserve Florida’s Natural Springs, please visit The Florida Department of Environmental Protection at www.floridadep.gov.

SUSAN GUNN is a retired paramedic and freelance photographer/writer living in Santa Rosa Beach. When she is not working, she can be found in the water or exploring the beauty of Florida. 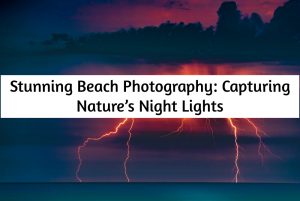 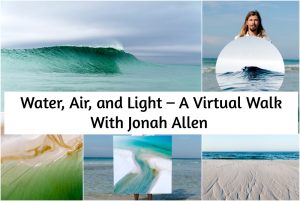