Craft Breweries and Distilleries Along Florida's Scenic Highway 30A - 30A 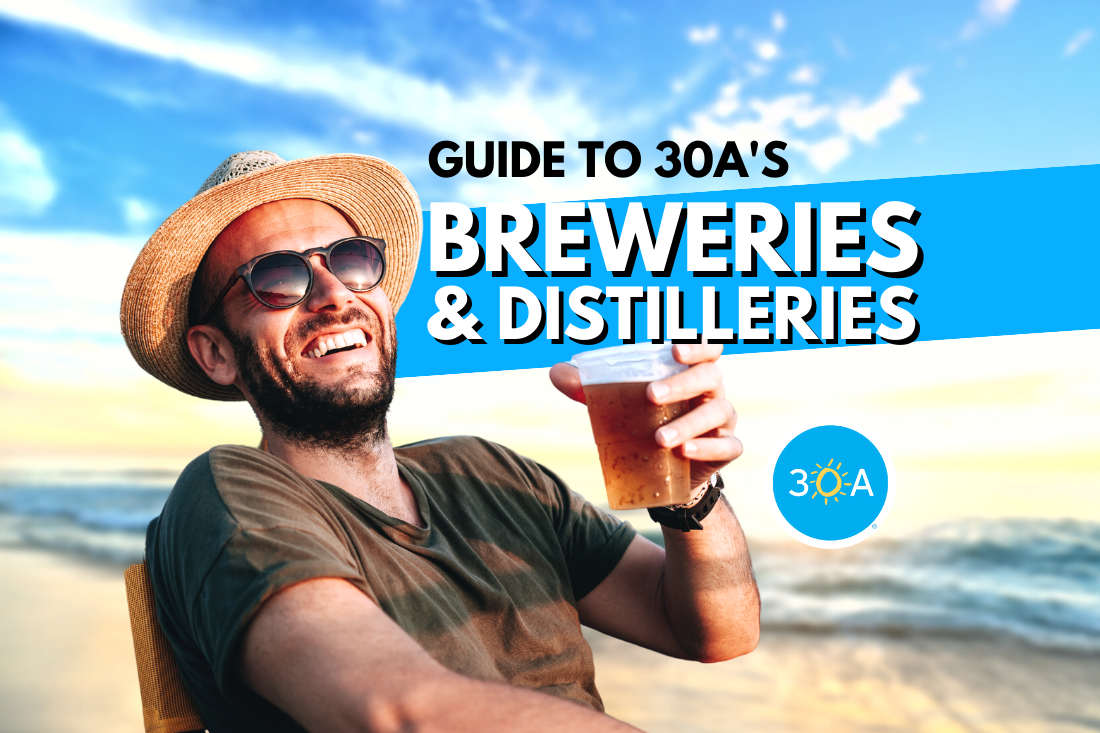 Whether you live on 30A or just spend your vacations here, there are many attractions this part of South Walton has to offer. Famed for its sugar-white sands, emerald-green waters, and multimillion-dollar properties, there are also plenty of simpler pleasures to enjoy while on a trip to this part of the Gulf Coast.

For me, it’s the little things that make the difference. If you’ve just come back from that breathtaking beach, and are lounging on the deck of your five-star beach house or rental property, is there a more perfect accompaniment to your lazy afternoon than an ice-cold brew or a long, strong cocktail?

And remember, this is 30A so a gas station six-pack or a plastic bottle of supermarket booze just isn’t going to cut it. It’s got to be something special, something prepared specifically for the lifestyle we enjoy on our little slice of paradise.

This is a craft brewery and distillery country – bring on those exotic tipples. Through the magic of print, let’s go on a ‘virtual pub crawl’ of some of our local artisan drink makers. 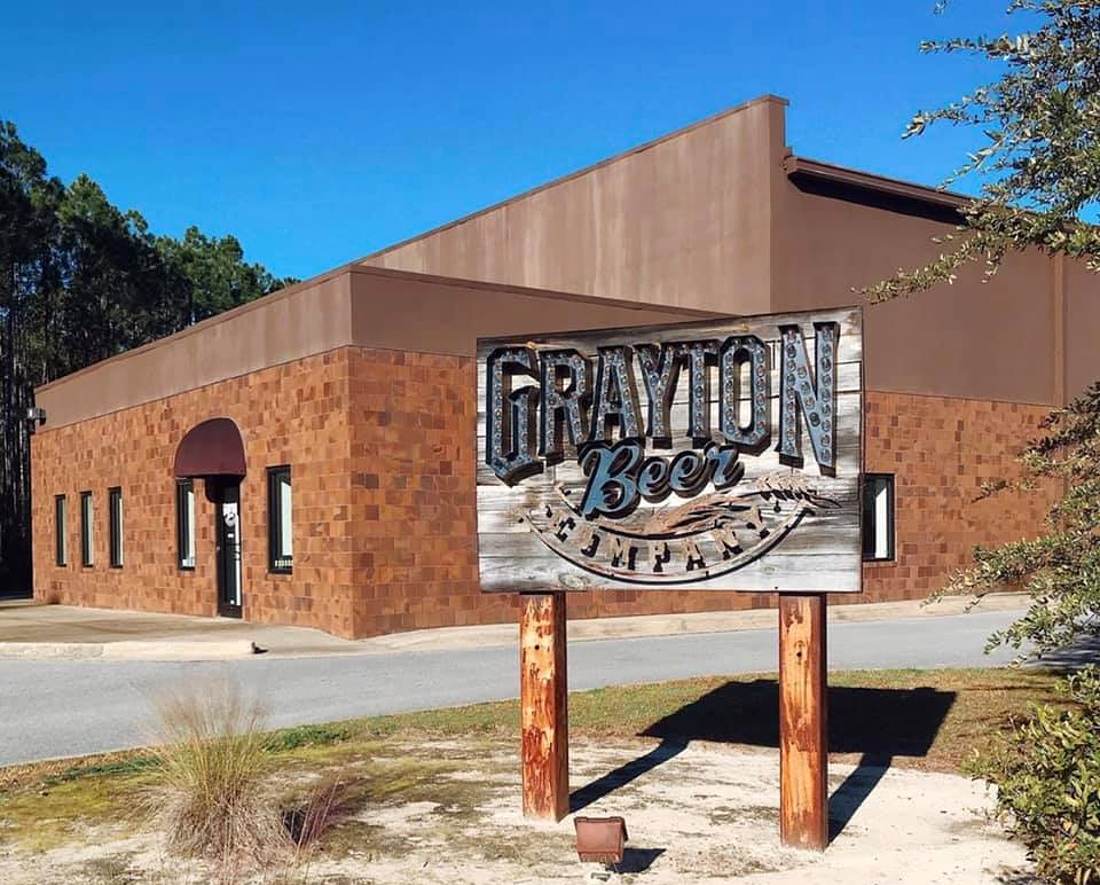 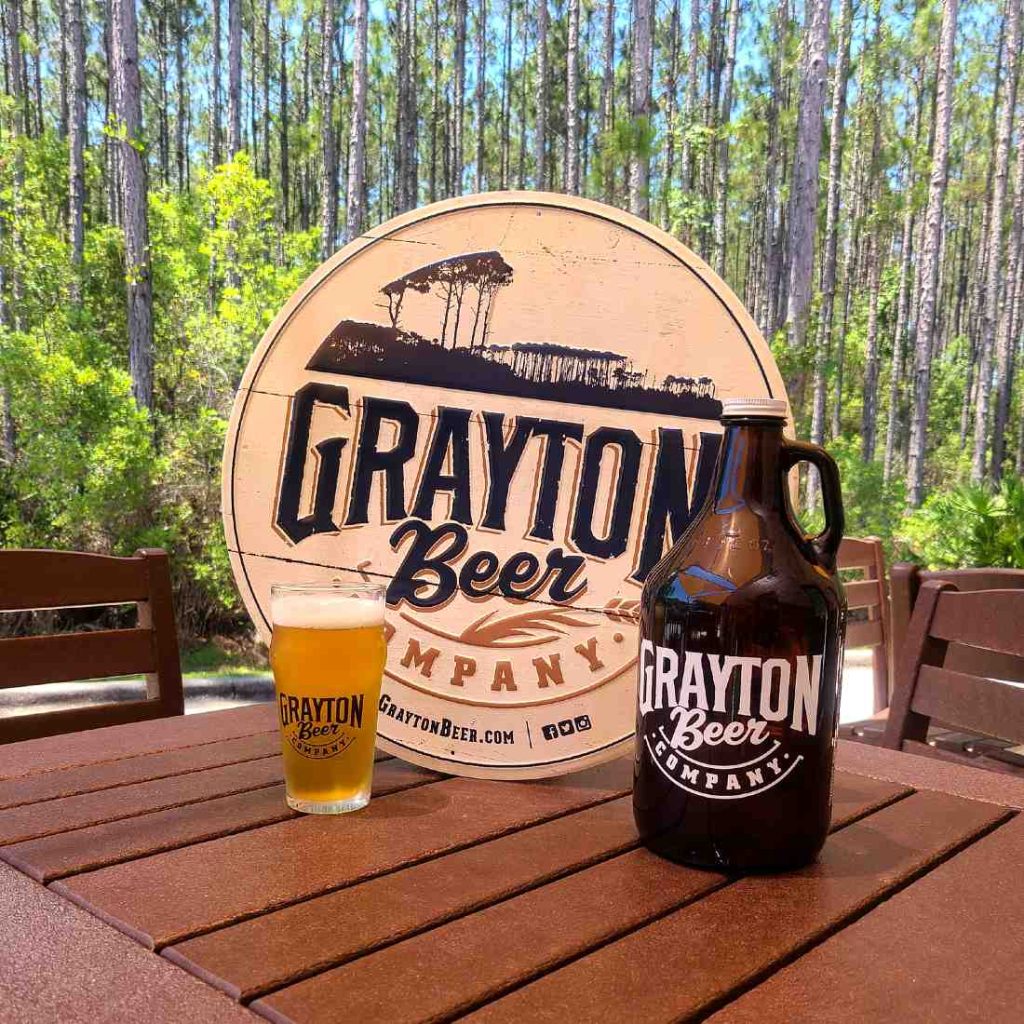 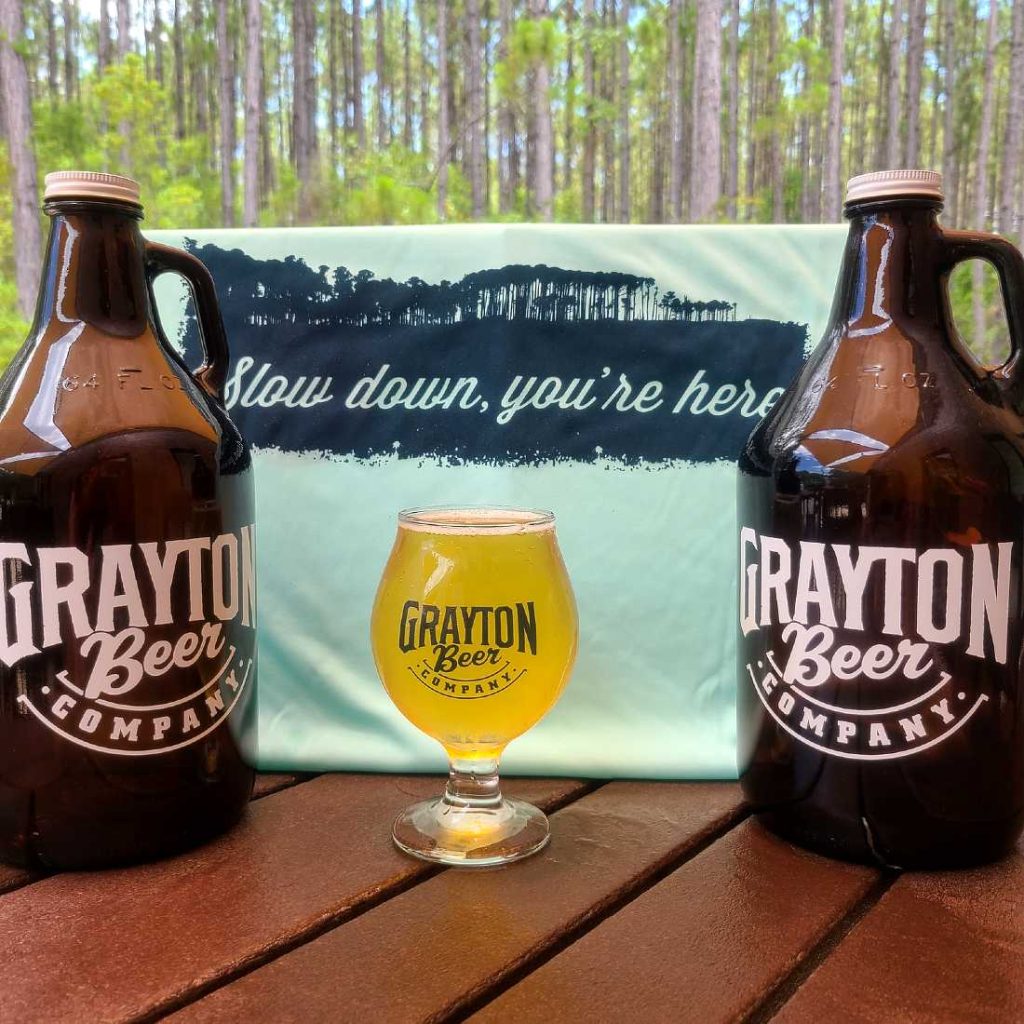 The Grandaddy of our craft brewing scene is Grayton Beer Company. I must declare an interest here as I spent a couple of years helping them set up their branding and marketing activity and still have the hots for that retro 30A Beach Blonde on the bottle label.

The brewery quickly became a fans’ favorite too. Not just for the high-quality beers it produces, but for the numerous events and get-togethers it hosts.

In the early days, the “bottling and packaging” parties were the stuff of legend. Turning up and helping fill thousands of bottles, packing them into hundreds of cases, and loading them onto dozens of shrink-wrapped pallets was enough to earn you an ‘unlimited refill mug’ from the bar after the hot and heavy work was done. The brewery with its shining steel kettles, fermenting tanks, and clanking and whirring bottling machinery, surrounded by cartons of packaging materials, benches, picnic tables, and a long bar with plenty of stools to perch on has the perfect mix of an industrial chic and down-home country dive bar. A perfect reflection of the clientele – captains of industry rubbing shoulders with budding country music stars.

Over the years the brewery has grown and a little bit of that ‘rough and ready’ has been replaced by a more buttoned-up approach – after all, the beers are sold from Texas to Georgia now and are found on the shelves of the region’s biggest supermarket chains. Like the once secluded beaches of 30A, their classic ‘slow down, you’re here’ attitude is a secret no more. 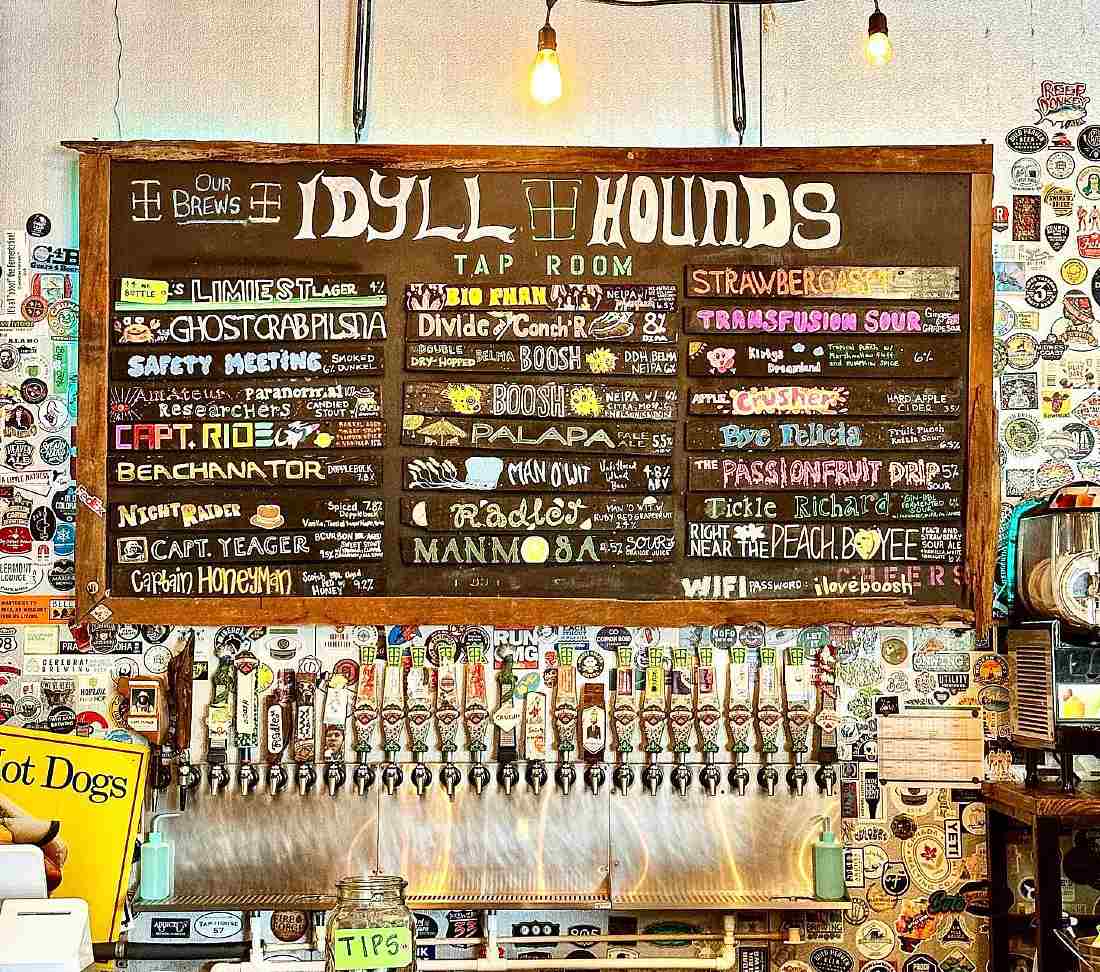 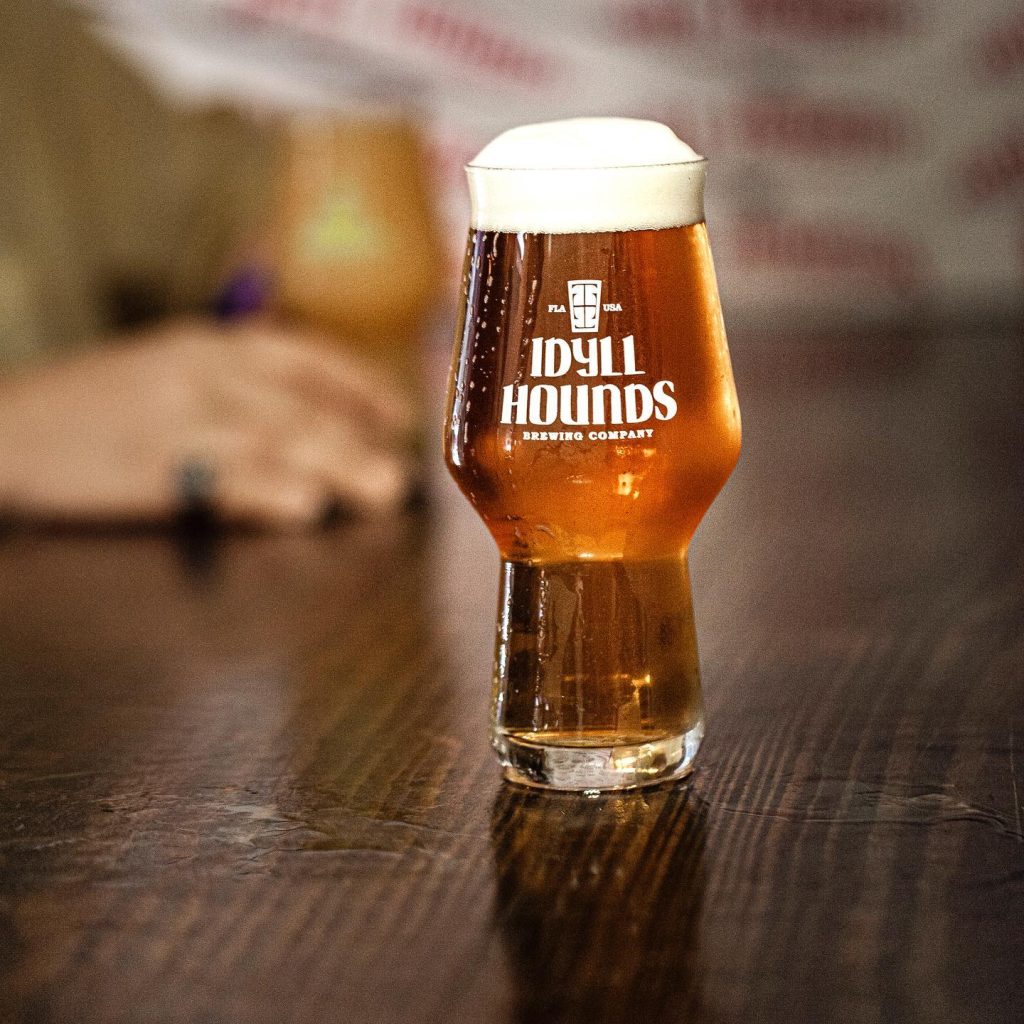 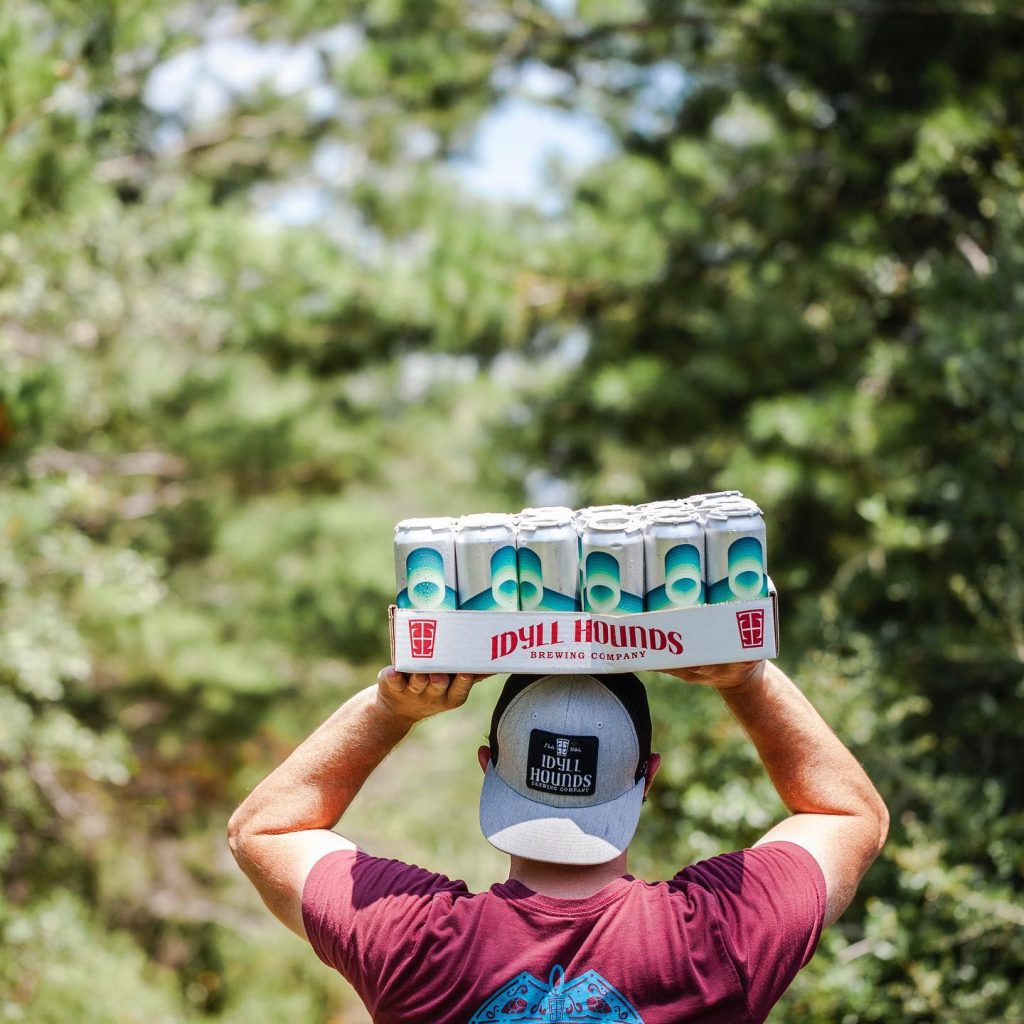 Round the corner, you will find Idyll Hounds Brewery which is sticking to its ‘local beer for local folks’ pedigree. The brewery was opened in 2013 and launched with a stable of beers it described as ‘flavor first.’

The brewery’s Divide and Concher Double IPA is still as popular today as it was when the powerful 8.0% ABV was first poured.

It has been joined by pilsners, pale ales, porters, and saisons as well as an occasional range of specialty beers as the team flexes its creative juices. But it isn’t all about the hops. 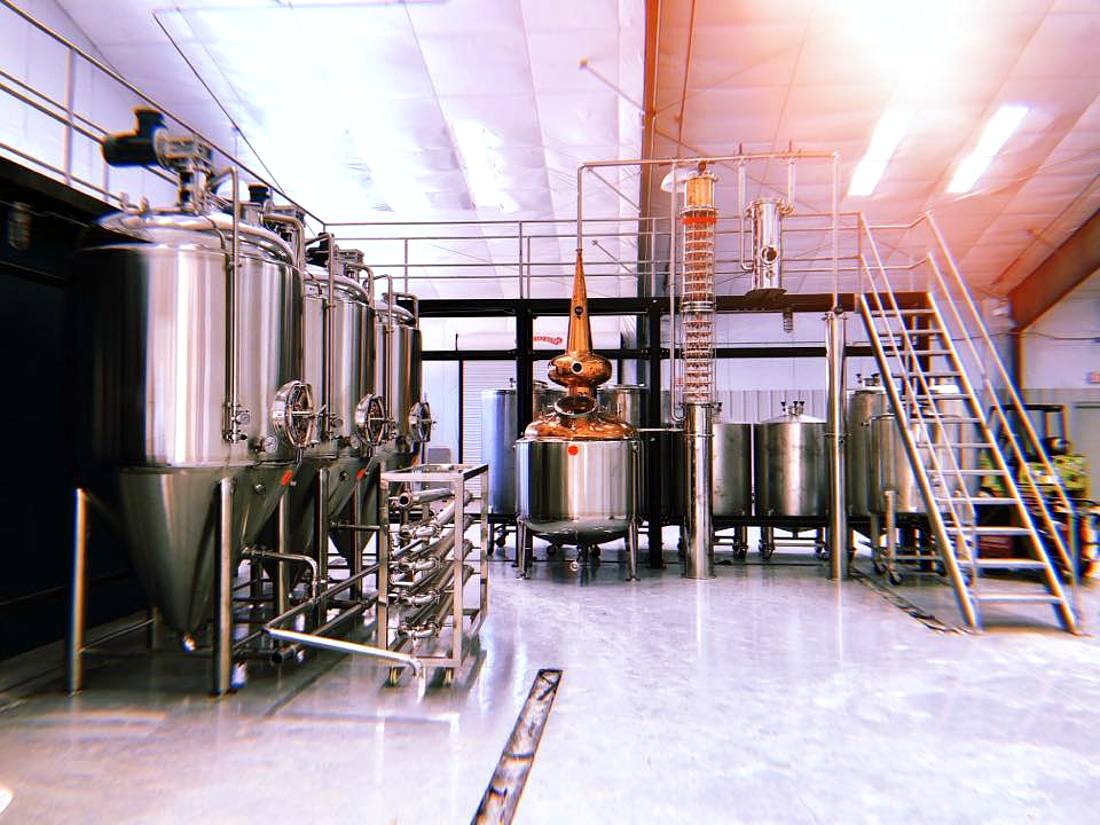 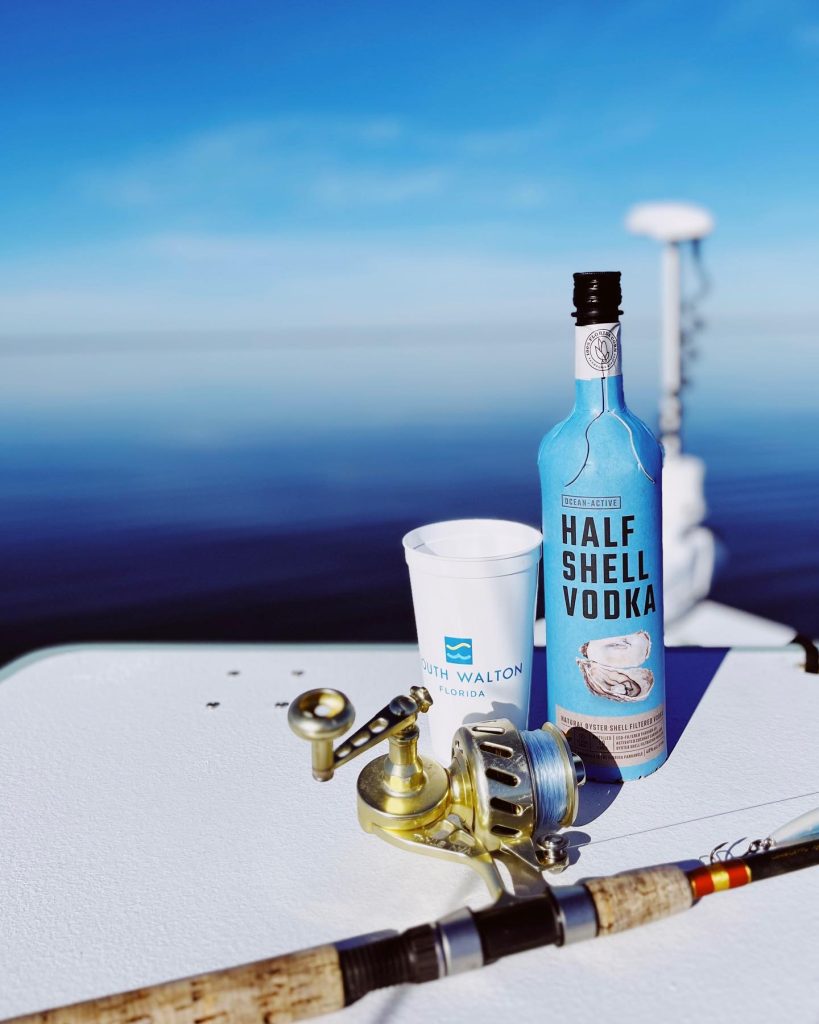 Next door to Idyll Hounds is the fabulously modern Distillery 98, home of the local vodka brand DuneLaker. Made by hand in small batches from locally sourced ingredients and family-farmed crops, 98 Distillery’s drinks and liquors are naturally infused with flavors reminiscent of the spirit of the Panhandle. While you can add a mixer, vodka connoisseurs insist the smooth organic vodka distilled here can be sipped neat and enjoyed. While vodka is the house special, plans are afoot for gins and whiskeys to be bottled and sampled too.

At the bar, you can buy bottles or indulge in signature cocktails. One of the most popular is the distillery’s version of an Old Fashioned – the original cocktail – which is infused with wood chip smoke before your very eyes. Delicious! 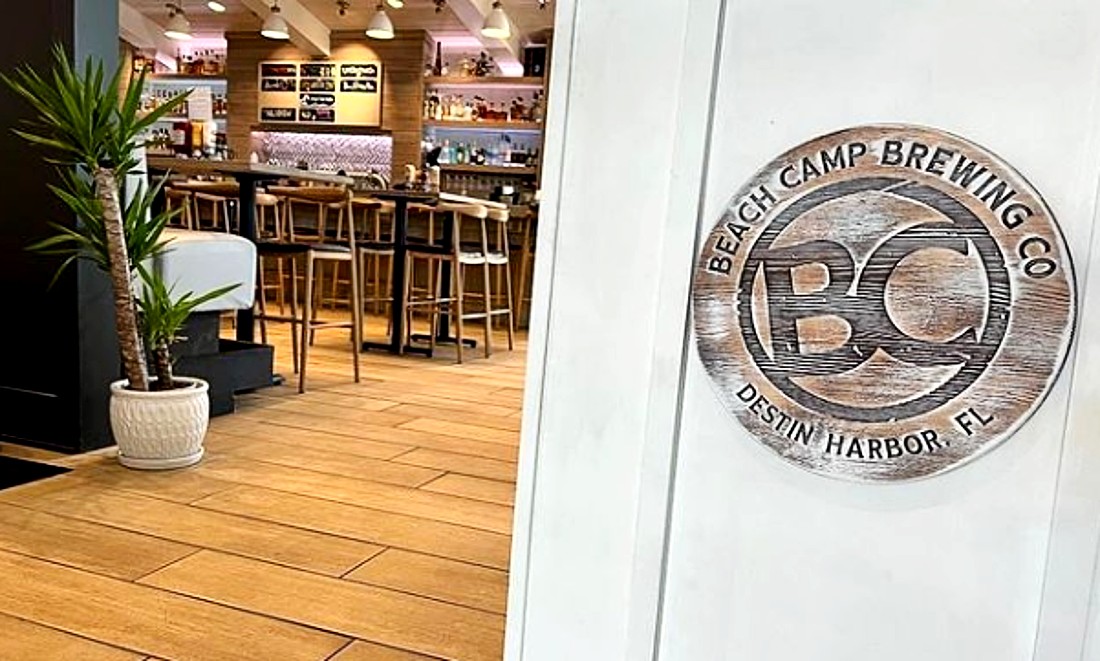 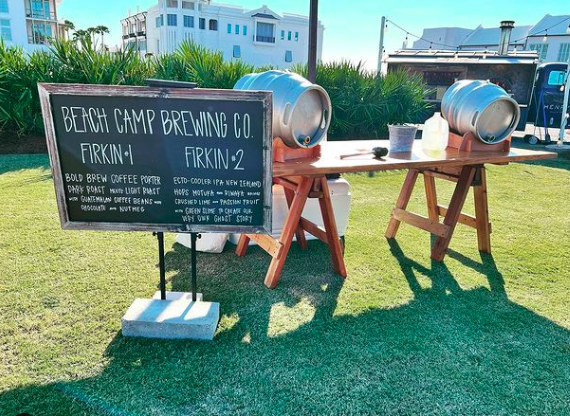 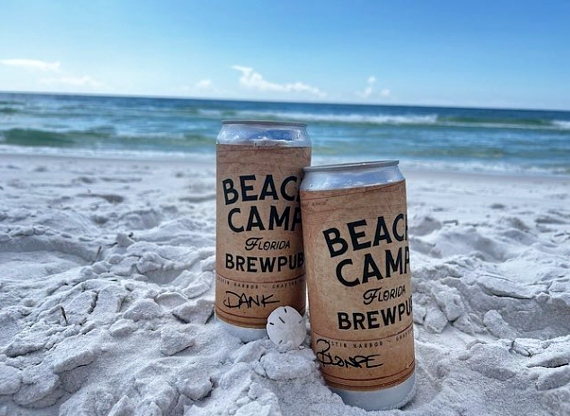 It might be that you want to have a beer while others at your party are fond of a cocktail or two. The place to head to for a sample of some of the best craft beers and spirits is probably Beach Camp on the 30A in Grayton Beach.

Beach camps were the original settlements along this notoriously difficult-to-reach piece of coast. Slowly settlers moved in permanently and the towns of 30A we know today started to take shape.

This bar, formerly a brew pub and before that a highly regarded restaurant, pays homage to the back story of the area and is a great place for a craft tipple or three.

With 15 draft beers all brewed on the premises, there is a taste profile for nearly everyone. From a dark and malty Dunkelweizen to a spicy with hints of cloves Red Ale. Spoilt for choice, you might decide to buy a flight and sample your own selection of these local craft beers. 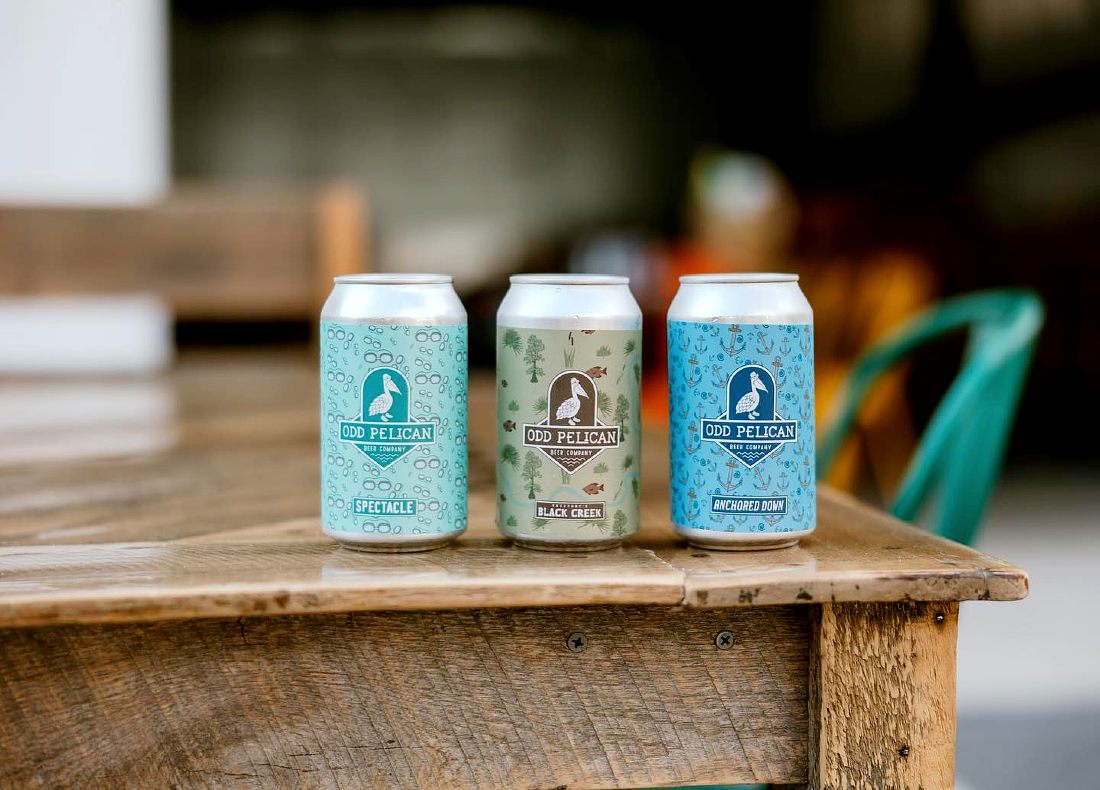 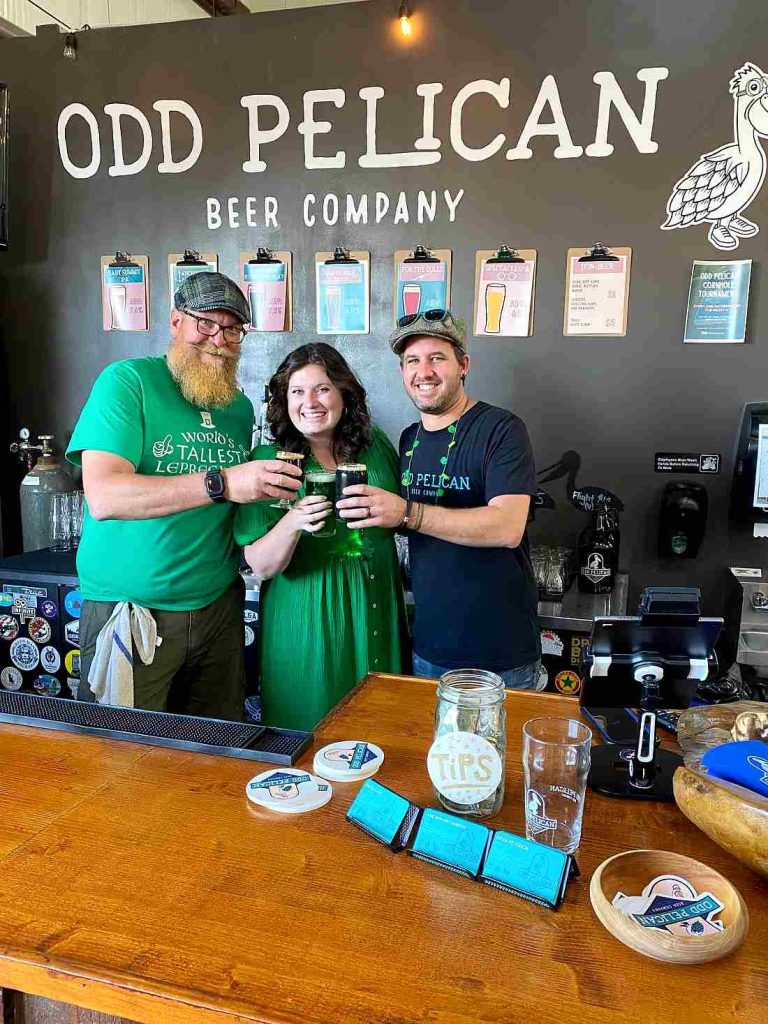 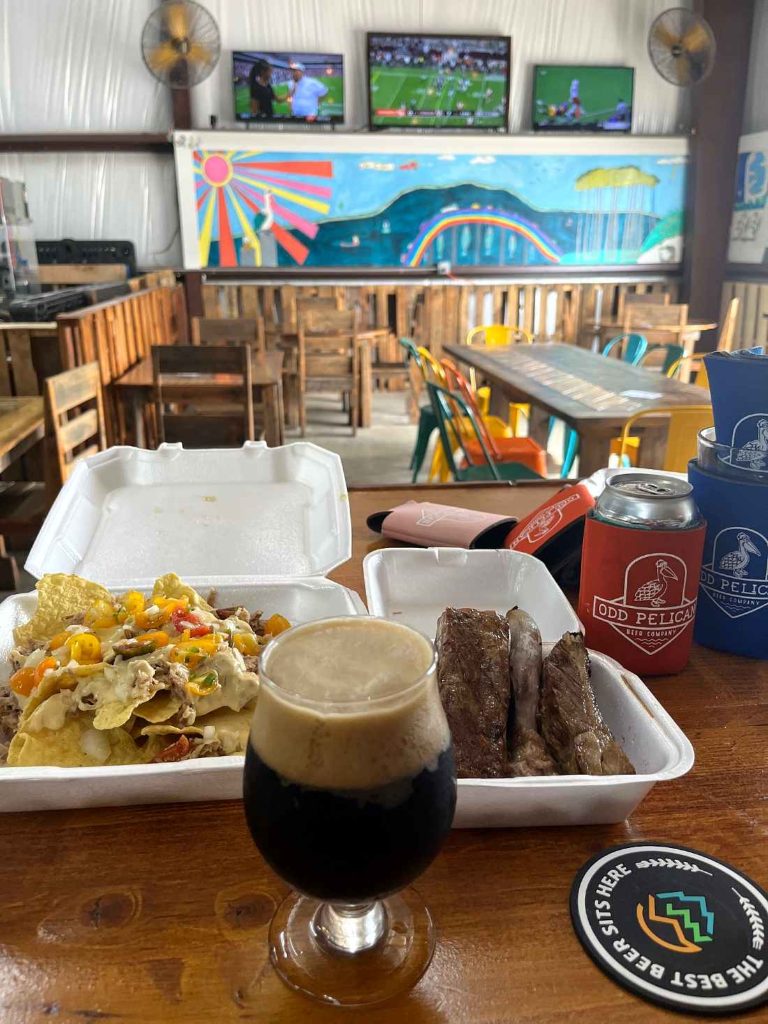 If you dare venture off the 30A – even beyond the 98 and over the bridge to ‘the mainland’ – stop off in Freeport at The Odd Pelican.

The name alone sets the scene for the wonderment to come. According to the owners, everyone is familiar with the “Flying V” formation of these beloved birds as they pass overhead, but did you know they always fly in odd numbers – leading to the question, and the brewhouse’s name – where is the missing odd pelican?

If that kind of riddle and nonsense is your thing, step inside.

The Odd Pelican has a range of own-label brews – including a Golden Ale, an IPA, and mysteriously an American Stout called Black Creek – a favorite fishing and kayaking spot in the area. Keen not to be pigeonholed, the team at Odd Pelican also brews some very ‘Tony’ looking beers in pastel colors called Seaside Suds and marketed at the millionaires lounging on the private beaches of the unofficial capital of 30A. 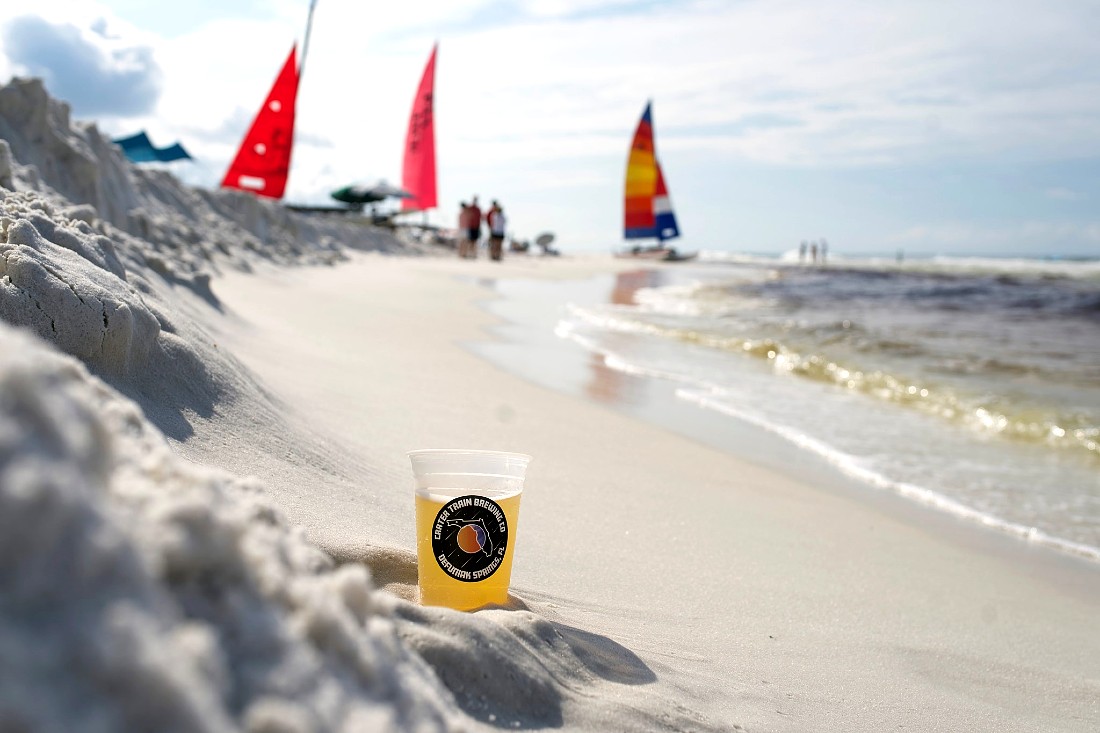 The final stop on this augmented reality tour takes us north towards the Alabama border. Plans are progressing nicely for the first proper craft brewery to open in historic Defuniak Springs.

If ever a town was destined to have a cold killer craft brewery in its midst it is this picture postcard town on the northern fringes of Walton County.

The town, wrapped around its perfectly round lake was an important stop on the railway a hundred years ago, and nothing much has changed for most of the century in between. But now hipsters and urban explorers are taking note. Beautiful antebellum mansions can be had for less than the price of a parking space on 30A and bakers, artists, designers, and architects are all moving in.

The brewery, called Crater Train in honor of the town’s transit history and most prominent feature, is actively raising funds on Kickstarter but has just taken delivery and started to install a shiny new 10bbl (10 barrel) brewing system in the 9000 sq ft facility the founders have acquired on the outskirts of town.

No news on the beers to be brewed yet but the two co-owners tell potential investors they hope to create “a vibrant local hub centered around the outdoorsy, arts, music and local history scene which still survives and thrives in Defuniak Springs” – clearly some interesting and original brews will be required to fuel that passion.