What's the Story Behind Inlet Beach's Missing Pier? - 30A 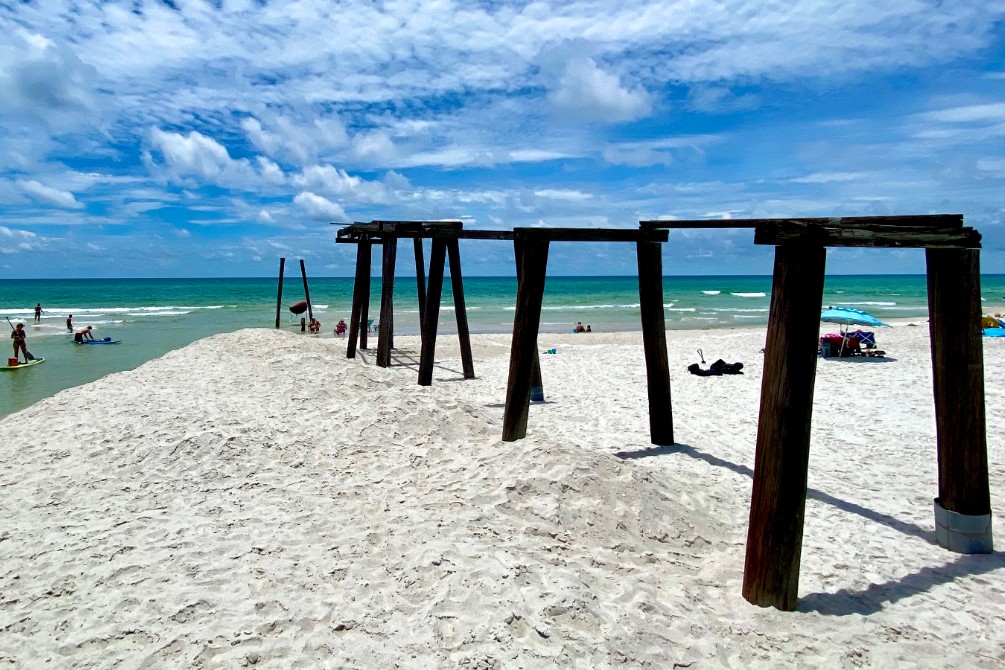 EDITOR’S NOTE: We regret to report that in late March 2022, the remains of the Inlet Beach Pier were suddenly removed by officials, without any public notice. While we are glad we were able to document its history prior to the demolition, we mourn the loss of this part of our community history.

Have you ever driven across the Lake Powell bridge and spied the battered remains of a wooden pier in the distance, ending in ruin amid the crashing waves and salt spray of the Gulf? Year after year, it succumbs bit by bit to the ravages of wind and rain — and yet it holds on. Like a stubborn child unwilling to leave a party, these decaying wooden bones tunnel deep into the white sand and do not relent.

In the 1950s this pier brought anglers further out into the Gulf. It held small boats at bay. It absorbed the shock of children’s bare feet sprinting towards the water. Below, in its cool, shadowed protection, families gather for annual beach photos while shell seekers scavenge around the wet, wooden beams searching for little treasures.

Today, only a few tenacious pilings remain. The length of the pier was destroyed in 1975 when Hurricane Eloise bore down on the stretch between Grayton Beach and Panama City Beach. The Cat 4 storm blew 120 mph winds and pushed a storm surge 18-feet above sea level. The pilings held, but the rest of the pier was lost.

What remains of this pier, a reminder of times gone by, has woven itself into the memories of generations of families. And, oddly enough, it all began with an employee incentive program.

Robert Hicks and McCaskill Investment Co. of DeFuniak Springs originally had plans to build a retirement complex on the 185-acres bordering Florida’s largest coastal dune lake. Sadly, Robert passed away and his wife, Margaret, was left to complete the construction of the lodge. She chose to make the lodge a permanent home for herself and her young daughter (also named Margaret). During the Great Depression, she added the concrete block Rainbow Cottages to the property and rented them to the public to provide income. 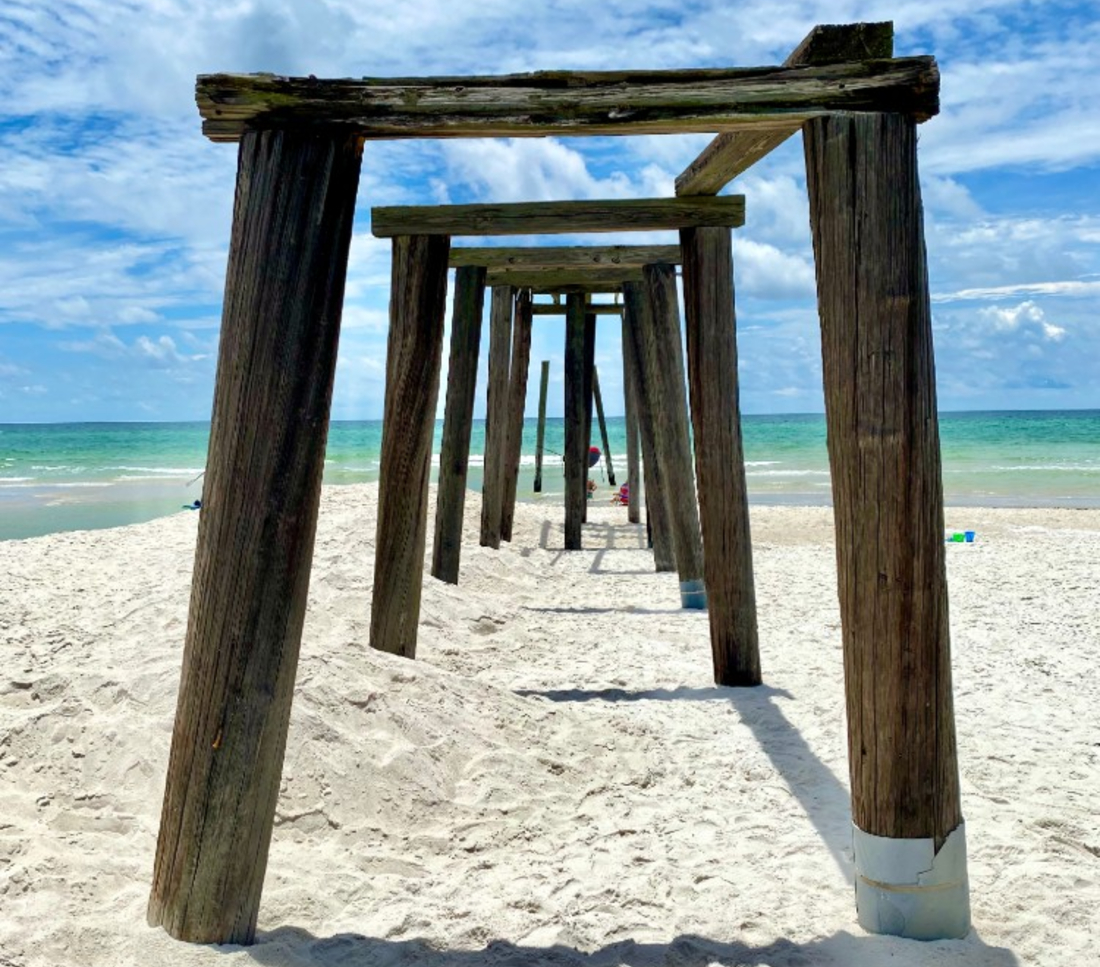 In 1945, Avondale Mills purchased the land from the Hicks family with the intention of creating beach retreats for their many employees. Avondale Mills operated plants in Alabama, Georgia, and North Carolina, and, rather than allow for employee unions, the mill created employee incentive plans that included paid, week-long vacations at the newly renamed Camp Helen. Avondale Mills added permanent duplexes, a recreation hall, and the pier to the property.

Once here, employees could boat, fish, play shuffleboard and bingo, dance in the recreational hall, swim, and relax. In 1987, Avondale Mills stopped providing Camp Helen vacations to employees and in 1996, the State of Florida purchased the property.

Nowadays visitors to Camp Helen State Park can explore two miles of nature trails that wind around Lake Powell’s shore, take self-guided tours of the Rainbow Cottages, lodge and recreation hall, and delight in the differences between the shady bluff above the lake and the hot marshland which leads to the beach.

At the Visitor Center, pick up a birding checklist and see how many of the 190 species of birds you can find. Avocets, Roseate Spoonbills, Reddish Egrets, Black Skimmers, Osprey, Magnificent Frigates, Great Egrets, and more can be found with a bit of patience and a good pair of binoculars. 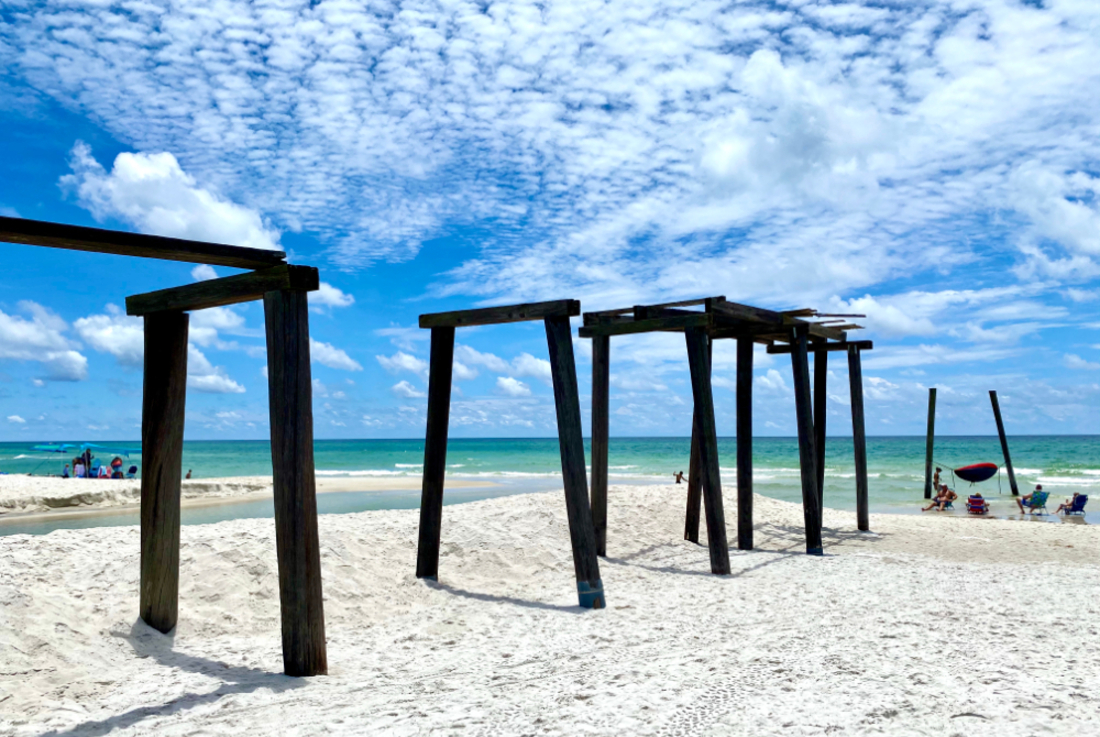 While looking for birds, keep an eye out for three other-worldly park residents too. Park visitors and rangers claim to have seen three ghosts roaming the property!

There is Captain Phillips, who crashed his schooner in the Inlet; Gigi, Margaret Hicks’s young grandson, who is said to have drowned in a tragic accident; and Rose, a young girl who was being held captive on a ship that ran aground in the Inlet. Anglers claim to have seen a young boy on the lake dock, but when they go to check no one is there. Rose is said to have been seen multiple times walking among the sand dunes and Capt. Phillips is said to yell at anyone sleeping in the lodge.

Whether it’s the romance of a battered wooden pier or the pull of natural beauty (or supernatural wonders), you won’t regret spending time exploring Camp Helen State Park.