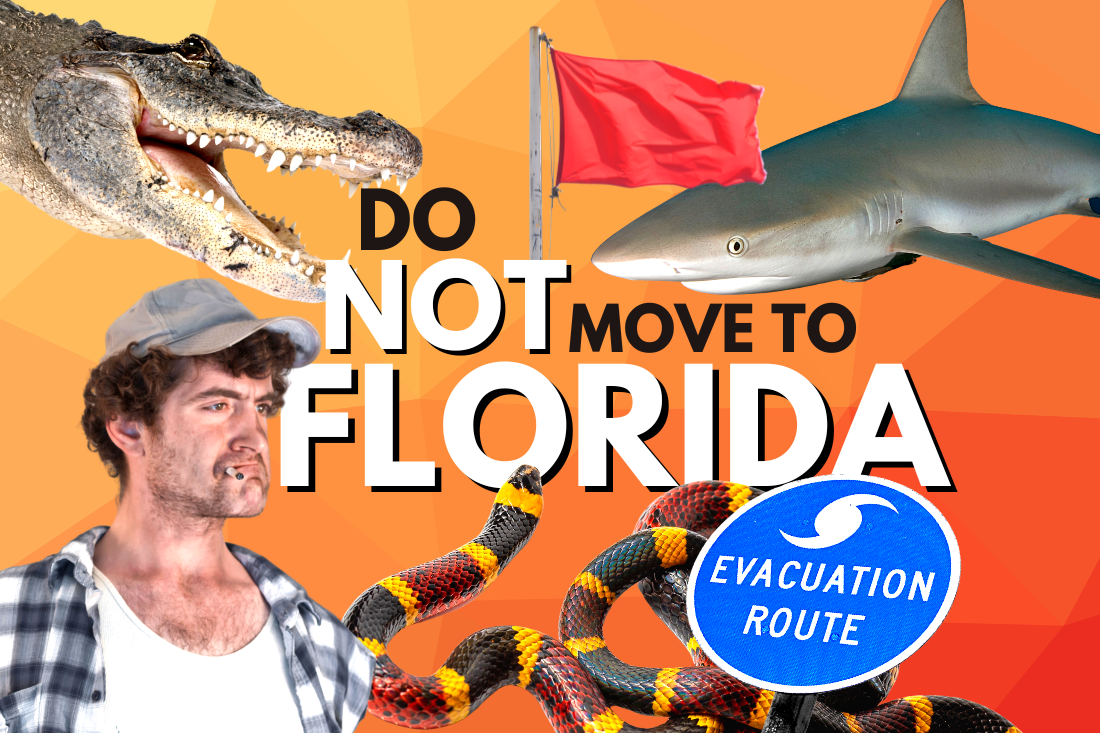 With minimal travel restrictions during the pandemic, Florida’s tourism numbers skyrocketed over the last couple of anxious years. With endless miles of beaches, warm weather, and no state income tax, it’s no huge surprise that many of those tourists are now migrating to the Sunshine State with the intention of becoming full-time residents. But before you sell your home, load up the family truckster and high-tail it south, there are a few things you should know about Florida first. With this in mind, here are 11 reasons you should NOT move to Florida.

Have you ever swam in the Gulf of Mexico? Yeah. Well, you were surrounded by sharks. They’re there, every single day. The Gulf is their living room after all. Even so, around the entire state of Florida, there have only been 13 fatal shark attacks in the past 140 years. And almost none in Florida’s panhandle. Still, they’re there. Waiting. Lurking. Whetting their toothy chops, patiently waiting for you to dip your toes in. If you can’t get past this thought, Florida probably isn’t the place for you.

What could be scarier than being eaten alive by a shark or alligator? How about being sucked straight down to the center of the Earth? Sinkholes can occur pretty much anywhere across the state, although the highest activity occurs in the west and central Florida because of the karst limestone rock formations upon which much of the property is built. Drought-like conditions followed by heavy acidic rain are the principal triggers that could cause your home, car, or yard to effectively disappear overnight. MUST READ: Beach disaster tips!

Midwesterners, New Englanders, and Canadians aren’t the only ones moving south to escape the cold. The Swamp Sasquatch – also known as Skunk Apes or the Florida Bigfoot – are frequently sighted from the pines of the panhandle to the everglades down south. These larger-than-life creatures are commonly described as 6 feet tall and covered in mottled reddish-brown hair. They’re nicknamed Skunk Apes due to their foul odor. It stinks, but this is another great reason to avoid the great State of Florida.

Worried about sharks devouring you in the Gulf of Mexico? Maybe you can stick to the lakes, rivers or bays. No. The gators will almost certainly get you. Well, that’s not true. Gator attacks are extremely rare. But if you can’t live with the idea that prehistoric beasts with cold, calculating eyes and endless rows of sharp teeth are lurking behind every palmetto, then you should stay up north in colder climates.

Speaking of foul odors, one of the most fascinating and dangerous beasts you’ll ever encounter across Florida could be your neighbor. The Florida Man. The source of countless memes and endless headlines, Florida Man is the ultimate anti-super-hero. Whether he’s calling 911 for a ride to Hooters, doing his darndest to get an alligator drunk, or telling police that the syringes found in his backside aren’t his, there is no end to the Florida Man’s shenanigans. 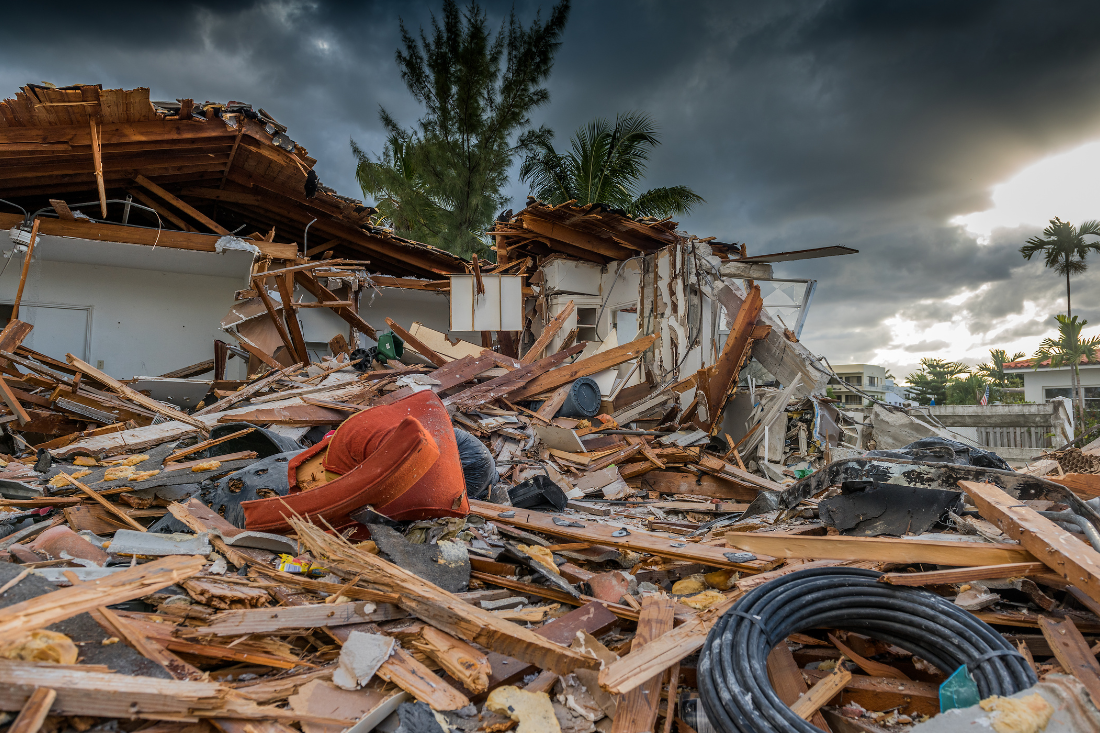 In case you haven’t heard, Florida is occasionally walloped by tropical storms, wreaking havoc, costing billions of dollars, and causing days of low productivity as all the amateur armchair meteorologists speculate which way the projection cone will lean. Each year, from June to November, a list of boys or girls’ names are chosen to identify the deadly storms brewing off Florida’s coast, either on the Atlantic side or the Gulf of Mexico, bringing destruction, flooding, and devastating hikes to your insurance rates. Oh, and we have lots of gnarly-looking waterspouts too. Check out this huge waterspout spotted in Destin in August 2022.

Living close to the sea may be the retirement dream for many, but climate scientists speculate that living too close to the edge might eventually drown those lifelong dreams. In a state which covers 66,000 square miles and has some 1,350 miles of coastline, the highest point anywhere in the Sunshine State is Britton Hill, a whopping 345 feet above sea level. With sea levels expected to continue rising, the best strategy might be to buy property 60 miles inland. Who knows, you might be beachfront before you know it! 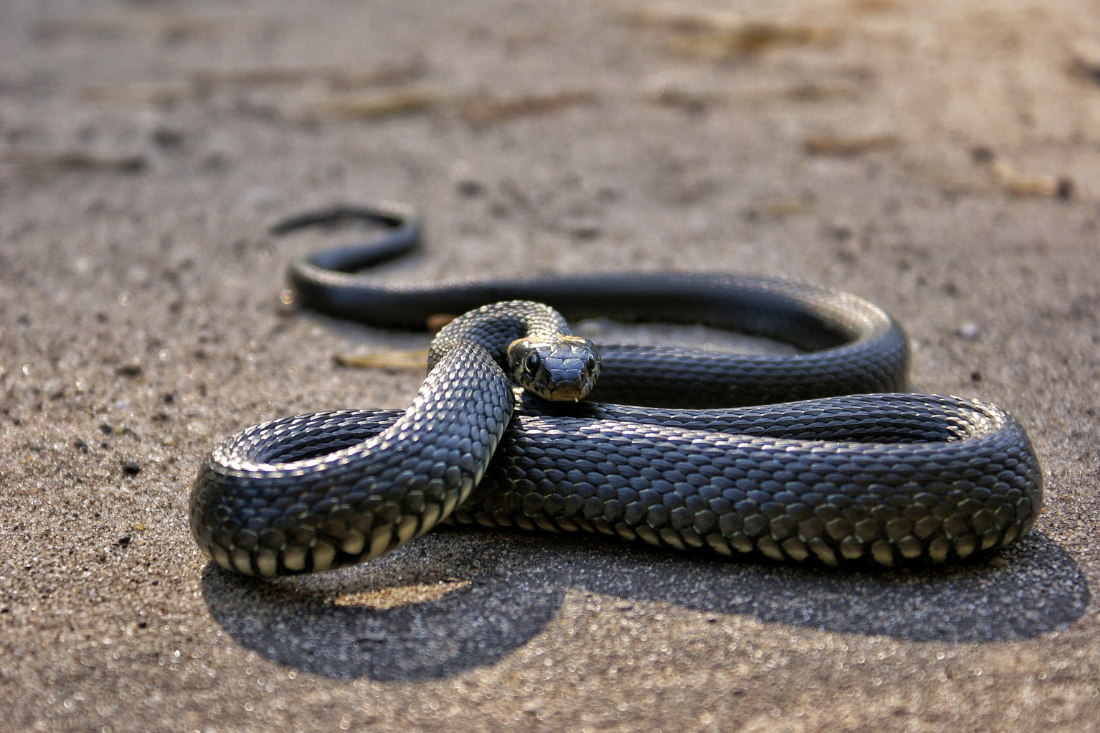 Florida is home to 44 species of snakes. The good news is that only 6 of them are venomous, including Copperheads, Coral Snakes, Cottonmouths, Diamondback Rattlesnakes, Timber Rattlesnake, and the pesky little Pygmy Rattlesnake. But venomous snakes are the only ones you need to watch out for. An estimated 10,000 Burmese Pythons have escaped from breeding farms and private owners in Florida and they’re now slithering rampant across the state. Burmese Pythons can grow up to 20 feet in length, dining on alligators and Florida’s furry friends. Who needs a little hug? 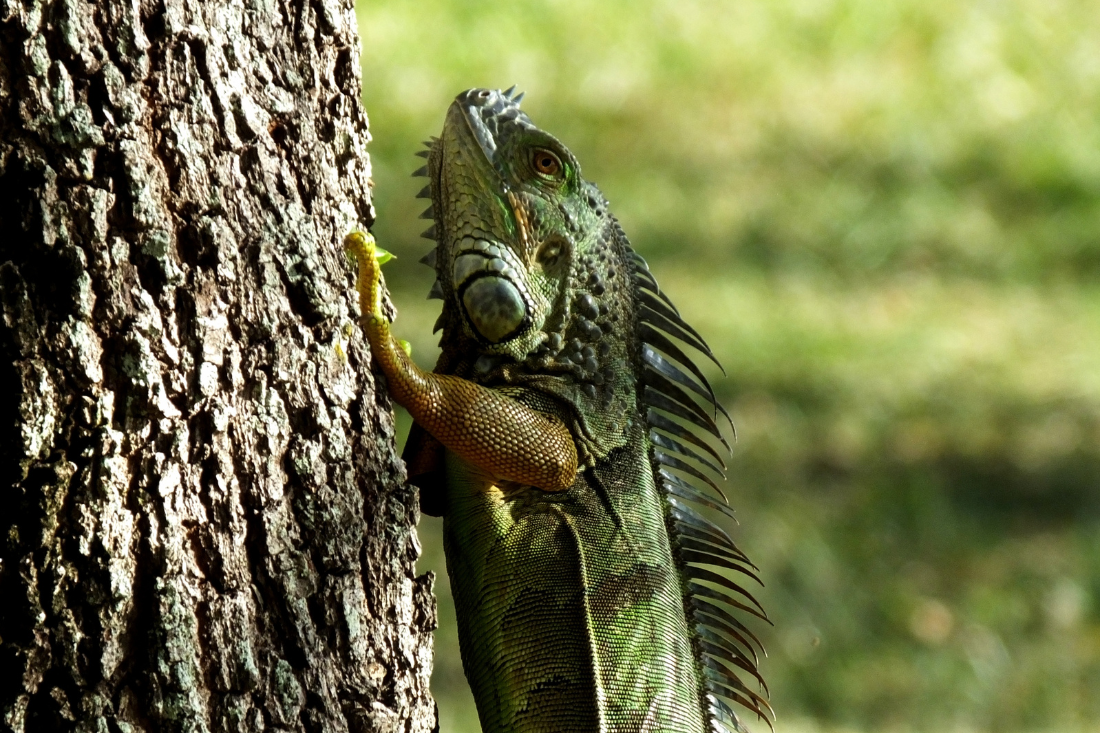 As if watching where you step isn’t bad enough, residents of southern Florida also need to look UP. Even though Florida is known for heat waves, cold snaps in the Sunshine State present their own dangers. When the mercury dips a little, southern Floridians find themselves dodging Falling Iguanas. Yeah, it’s a thing. The scaley reptiles don’t like the cold and when temperatures fall into the 40-degree range, these cold-blooded beasts get sluggish, disorientated, temporarily paralyzed, lose their grip, and then plummet down onto pedestrians, cars and sidewalks from the trees above. So before you skip off to see the lizard down the yellow brick road to Florida, you might want to buy a hard hat. 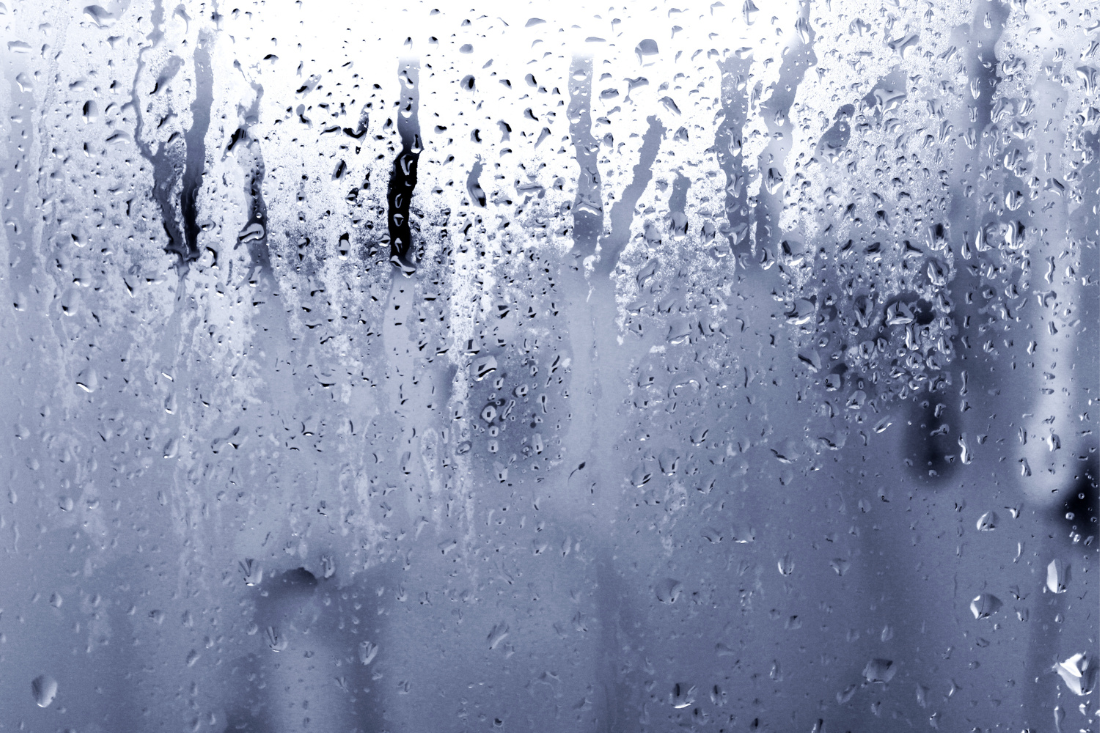 “It isn’t the heat that gets you, it’s the humidity.” Florida’s near 100% dew point makes a pleasant 80-degree morning feel more like a day hiking in a sauna. You’ll need to keep a favorite ballcap with you at all times, as you’re usually going to be a sweaty, sticky mess of a human being. If you don’t like running into people at the grocery store looking like you just finished running a half-marathon, you should probably stroll right on past Florida. 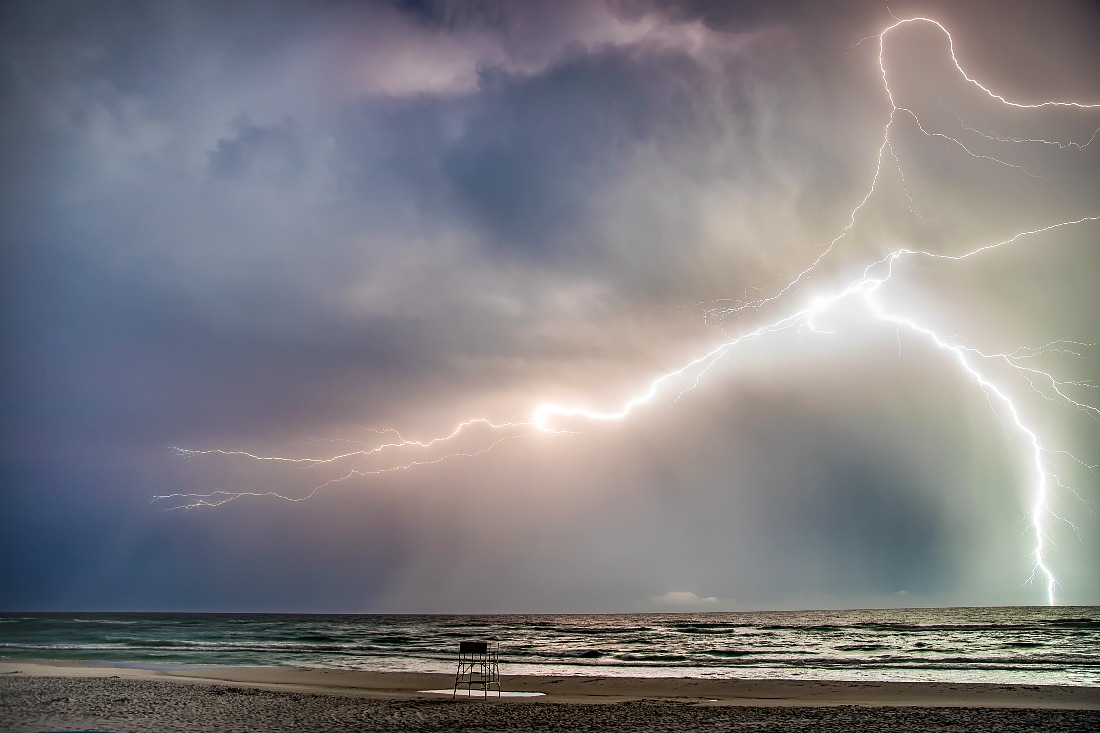 According to the CDC (because they’re never wrong), Florida is the “lightning capital of the country,” reporting some 2,000 lightning injuries over the past 50 years. Interestingly, they also report that males are four times more likely than females to be struck by lightning, which seems a little sexist. Also according to the CDC, activities such as fishing, boating, sports, and relaxing at the beach account for almost two-thirds of all lightning deaths. Pretty shocking statistics, especially for beach lovers.

All kidding aside, Florida is a wonderful place to visit, and it’s an even better place to call home. As a result, Florida will undoubtedly remain the most popular relocation destination for Americans and many international retirees for many years to come. Even though we have our fair share of problems, we’ll risk Skunk Apes, Sinkholes, and Falling Iguanas any day over shoveling sludgy snow.