Jake Meyer On Designing A Gulf Coast Legacy – 30A 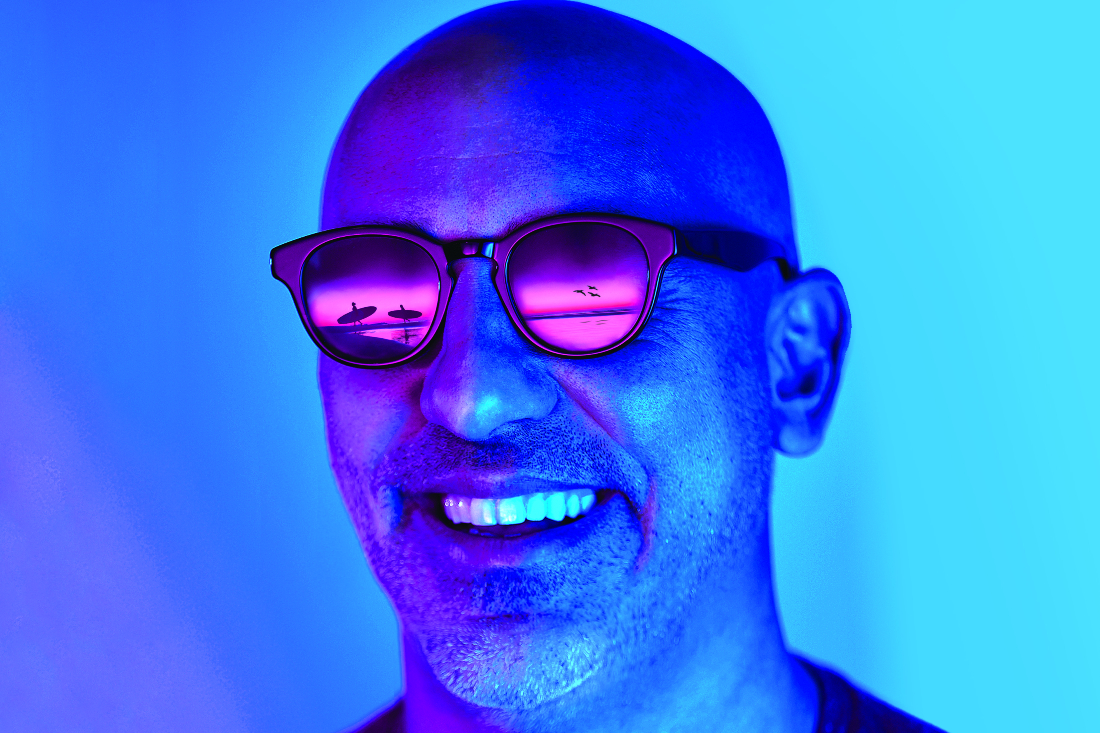 And even if you don’t frequent the Emerald Coast, you’ve likely seen his creative imprint on national and global companies such as Chipotle Mexican Grill, New York’s International Culinary Center, The Rose Group in Australia, and the rapidly growing Rock N Roll Sushi franchise.

And it all started here at the beach 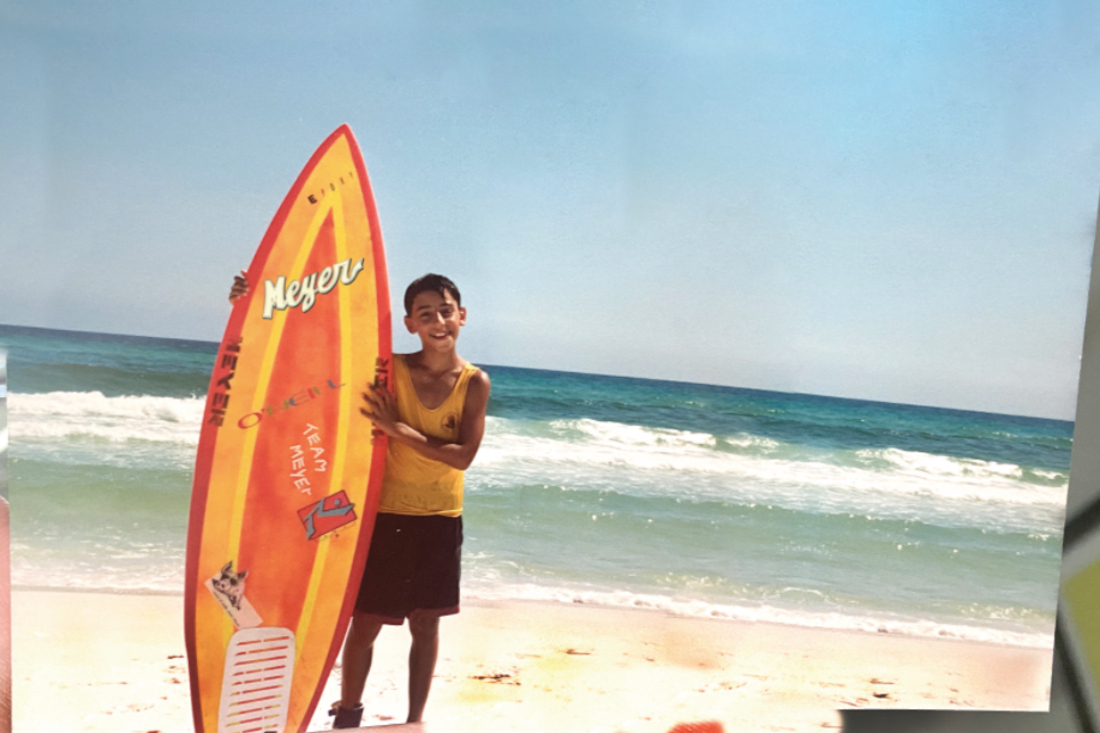 Jake at Miramar Beach circa 1989

Jake Meyer arrived on the shores of Miramar Beach, Florida, when he was just one year old. His parents had recently separated, and his dad, Mike Meyer, migrated to the Gulf Coast from the blustery bustle of Toronto, Ontario.

“I began spending every summer, winter, and spring break here,” said Jake. “You couldn’t get me off the beach. Whether I was surfing, skimboarding, or working beach service, it truly became my happy place.”

While Jake was growing up around the beach, his father, Mike, was pursuing his own happiness. From a garage workshop on Miramar Beach, he began shaping surfboards and skimboards in 1985. Within 10 years, Meyer Skimboard company was the largest manufacturer of skimboards in the world, producing over 40,000 boards a year and clientele from all over the U.S., Europe, South America, and as far away as Japan.

In 1995 Jake’s dad bought the beachfront land where Pompano Joe’s restaurant now sits. He donated over 1,000 feet of this beach-front property to Walton County, enabling them to build a public park beside the restaurant. Jake’s stepmom and brother still operate the red-and-white beach umbrella service that’s become iconic along that stretch of white sand.

Jake has creatives and artists on both sides of his family, which must have inspired his interest in the arts. Added to that, two generations of entrepreneurs, from his Canadian grandfather’s successful clothing store chain to his father’s skimboard line, and the foundation for Jake’s legacy was written.

“The first logo I ever designed was for a surfboard that my dad made,” reflected Jake. And although his father passed away a few years back, Mike Meyer’s legacy lives on in the heart-warming stories the locals share with Jake about Meyer Skimboards and his dad’s larger-than-life personality.

But Jake’s personal legacy had yet to take shape.

It wasn’t until his first year at Florida State University that Jake connected his artistic leanings to the profession of graphic design. “I’ll never forget walking down the hall in the art building and seeing someone working on one of those candy-colored iMacs. I enrolled in design the next semester and after the first class knew that I had found my calling. My mom remembers me telling her that graphic design was ‘in my bones’.” 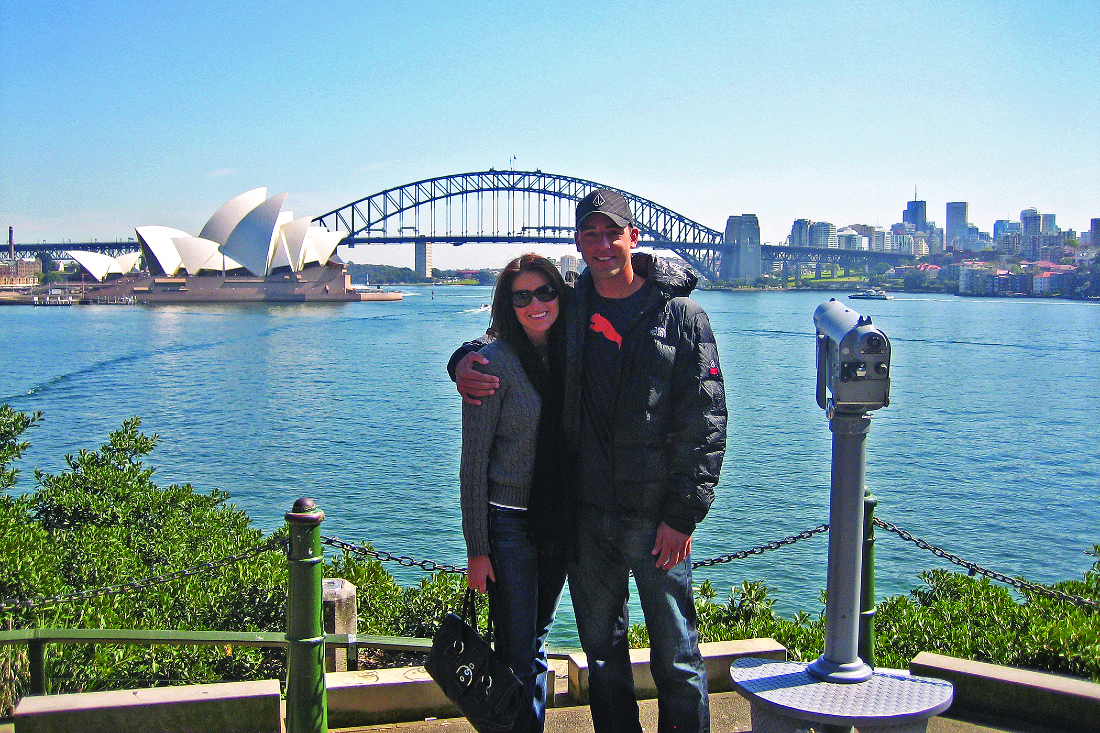 Jake and his wife, Stefanie

After graduating, Jake met his future bride, Stefanie, while on a photoshoot for the small Florida agency where he was working. Stef, a native of Fort Walton Beach, was modeling to save up money for college. While their attraction was instant, it took crossing paths over several more years for the romance to finally ignite. In 2007, shortly after working together at Cornerstone Marketing and Advertising on Grayton Beach, the two began dating.

Of that time Jake says, “I am really grateful for what I learned at Cornerstone. It truly afforded me the opportunity to gain the wide range of experience that allowed me to do what I do today.”

When Jake turned 30, he and Stefanie decided to break away and seek adventure, which took them to Coogee Beach, a coastal suburb in Sydney, Australia, across the world but still by the beach.

There they created the marketing and design company, I Will Design For Food (IWDFF), a slightly tongue-in-cheek reference to the 2008 economic downturn while also reflecting their shared love of great food.

Pioneers of the digital nomad lifestyle, the two began working for clients in both Australia and back home on Florida’s Gulf Coast. They returned home after a year abroad, and in 2010, Jake and Stephanie officially tied the knot at Eden Gardens State Park, just north of Seagrove, Florida. 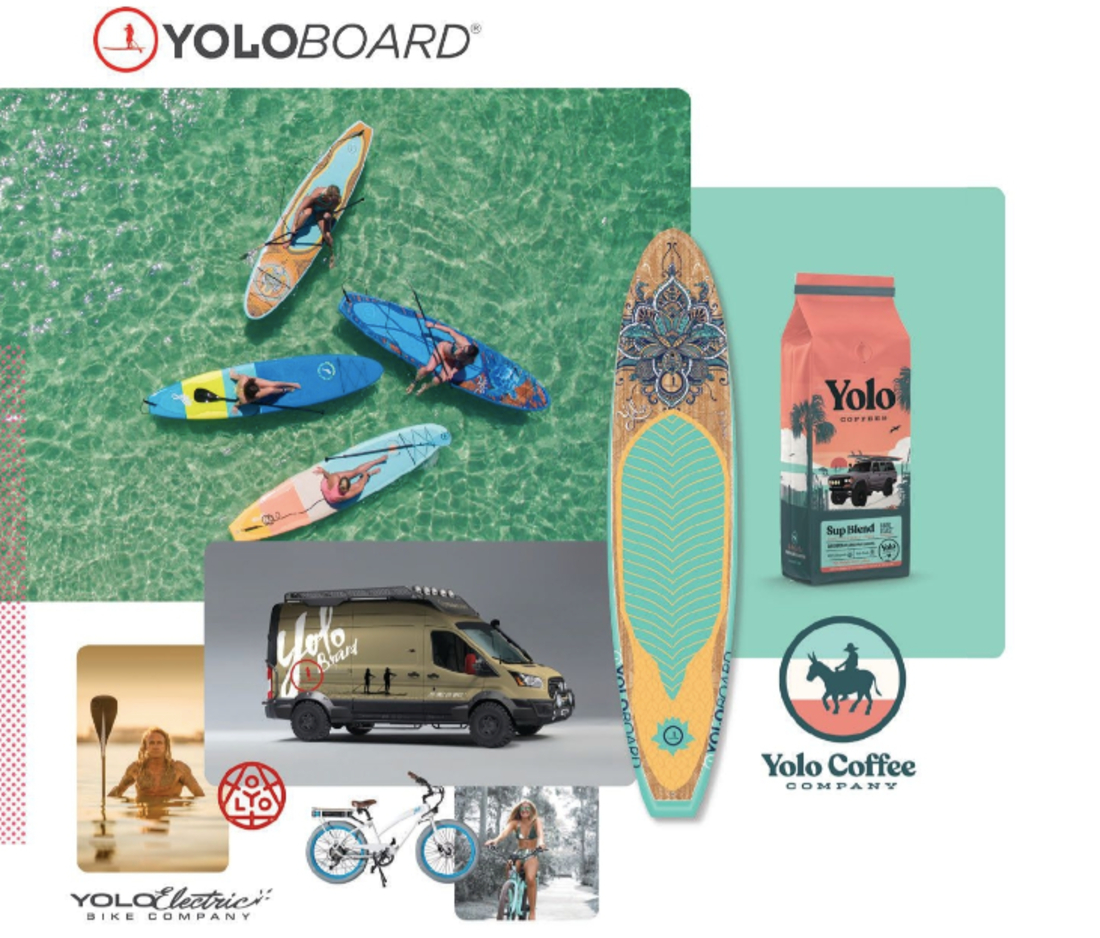 Through a referral from a lifelong friend, Jake began working with YOLO Board, a small lifestyle and water sports company founded by Jeff and Mitzi Archer.

“They were one of my smallest clients at the time,” said Jake. “Little did I know that 13 years later, they would be one of my biggest clients and an international brand.”

From paddleboards to electric bikes, to coffee, apparel, and interior design, IWDFF has been responsible for developing that now-famous brand from day one.

“I sleep better at night because of Jake Meyer,” said Jeff Archer, founder of YOLO Board & Bike. “In the water sports and lifestyle leisure business, we’re challenged every year to create a better line. Jake and his team consistently execute greatness, year after year.”

But I Will Design for Food is much more than a design firm. For Jake, it’s all about the brand experience.

“We help you uncover what your larger truth is,” said Jake. “We don’t just design one-off logos and websites. We tell the entire story of your brand. We pride ourselves in being able to extract the soul of a company and translate it into the commercial world.” 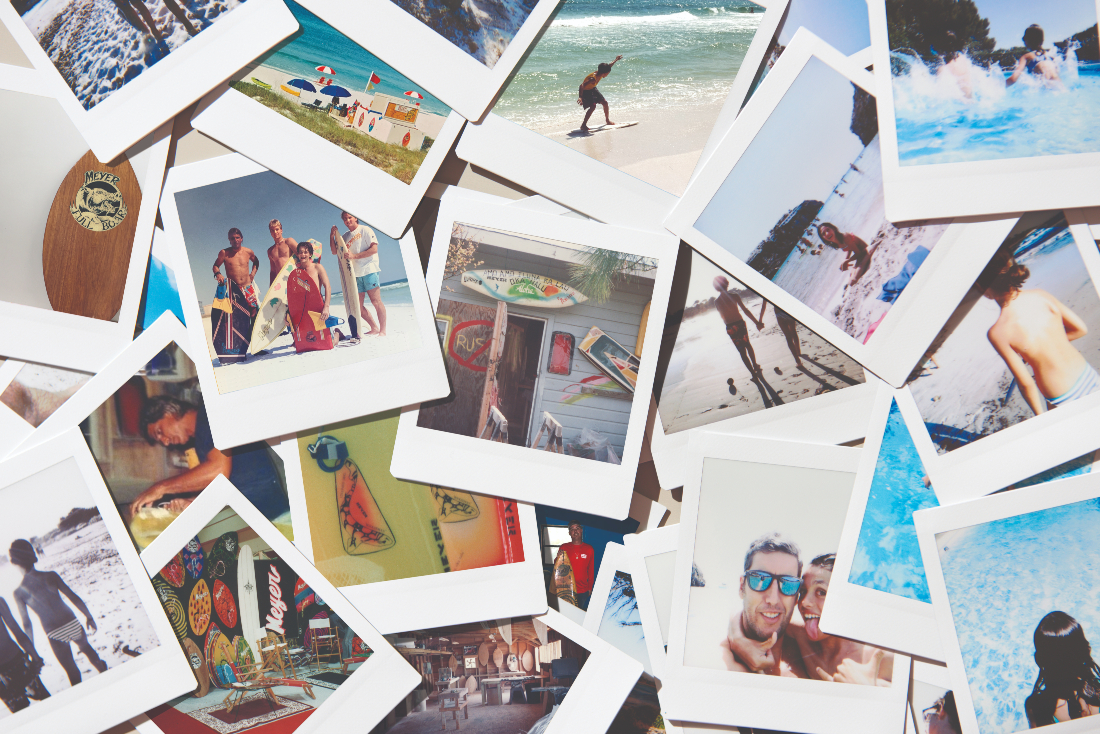 While I Will Design For Food works with numerous lifestyle brands, they’ve certainly found a delicious niche among restaurants and culinary brands.

“We have a deep understanding and passion for food and the overall dining experience,” said Jake.

“If I hadn’t succeeded with a career in design, I would have gone to culinary school.”

Jake believes that branding is much more than just coming up with a nice-looking logo, menu, and website, especially for restaurants. With 80% of new restaurants closing within their first year and 80% of the ones left standing failing within 5 years, Jake said it’s crucial to get everything right from the start.

“Restaurant branding is about defining the entire experience,” he said. “It’s how you look on social media channels, how the restaurant interior makes you feel, how the staff treats you, what music is playing, what paper you use for the menu, what artwork you hang on the wall, what the staff wears, and how the food is presented. It all has to work together, but in order to achieve that, you have to develop a strategic branding plan. If you’re not extraordinary, no one will remember you.”

Now based in Atlanta, IWDFF works with companies and brands all across the globe. But Jake said they especially love working with businesses along Scenic Highway 30A and throughout Florida’s panhandle.

“We not only know the area so well but we love the challenge of reinventing each company’s interpretation of the beach,” he said. “The small towns along Scenic 30A are still somewhat isolated, and I love bringing bigger market concepts and influence into the area.” 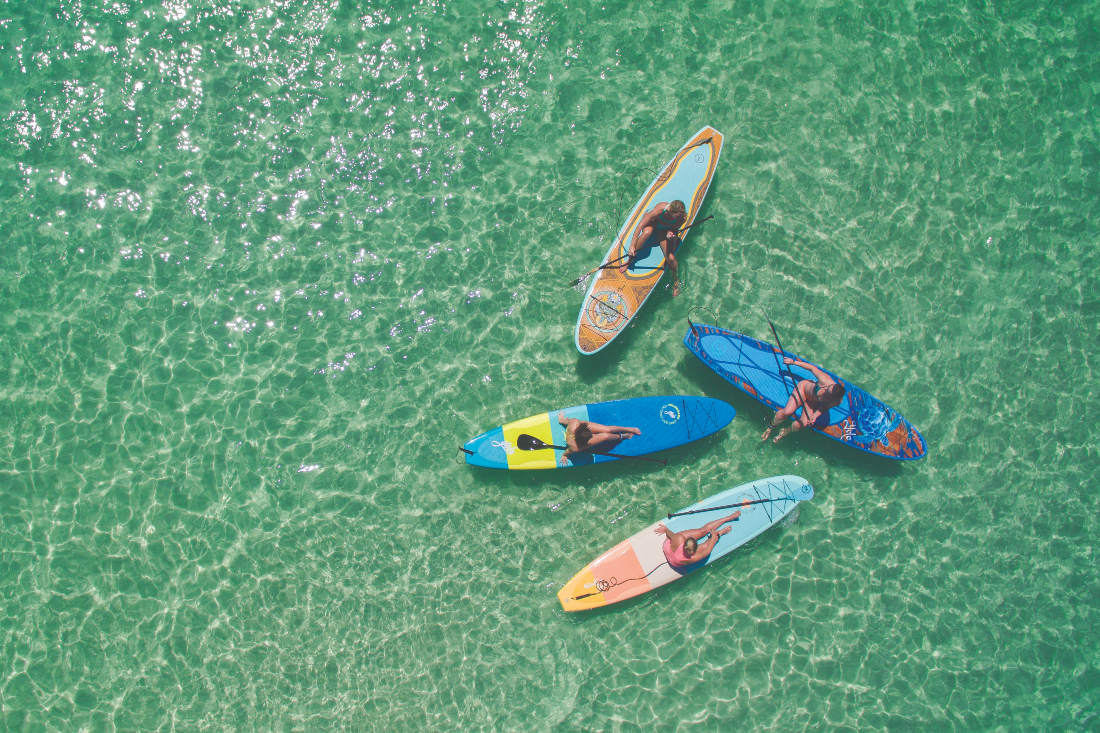 But it’s not all work and no play. At heart, Jake is still a beach guy. Like those formative springs and summers of his childhood, Jake and Stef are still routinely drawn back to their second home here at the beach.

“You can find us hanging out by our favorite dune lake, Lake Stallworth, eating gumbo at Stinky’s Fish Camp, enjoying sunsets at Bud and Alley’s, and playing in the surf and sand with our daughter at WaterSound Beach Club,” said Jake. “It’s magical to see the same intrinsic connection to the water as I did in my childhood.”

But unlike those tiny footprints in the sand, washing away with every tidal ebb and flow, the Meyer family legacy is destined to shape our Gulf Coast for decades to come.

“My dad created his legacy here, and now I want to do the same for our daughter,” said Jake. “One day, I hope she’ll follow in our sandy footsteps.”

For more info about Jake Meyer, check out I Will Design For Food.